One week ago we stepped off of the bus that took us from New York City to White Marsh, Maryland, officially ending our trip around the world. For the last time, we grabbed our backpacks from the underbelly of an oversized bus, hefted them onto our backs, and made our way over to our two very excited mothers, so happy to have us back. Kathy and Valerie were waving an American flag and carrying balloons, welcoming us home.

It felt great to be back, traveling down familiar Interstate 95, along the same route Tim and I drove so many times while I was in school in New Jersey. Just forty-five minutes later we were pulling up into the driveway of my mother’s house, a place that I have called home off and on for thirty-one years.

Note: This post was written in August 2015, one week after the conclusion of our around the world trip. 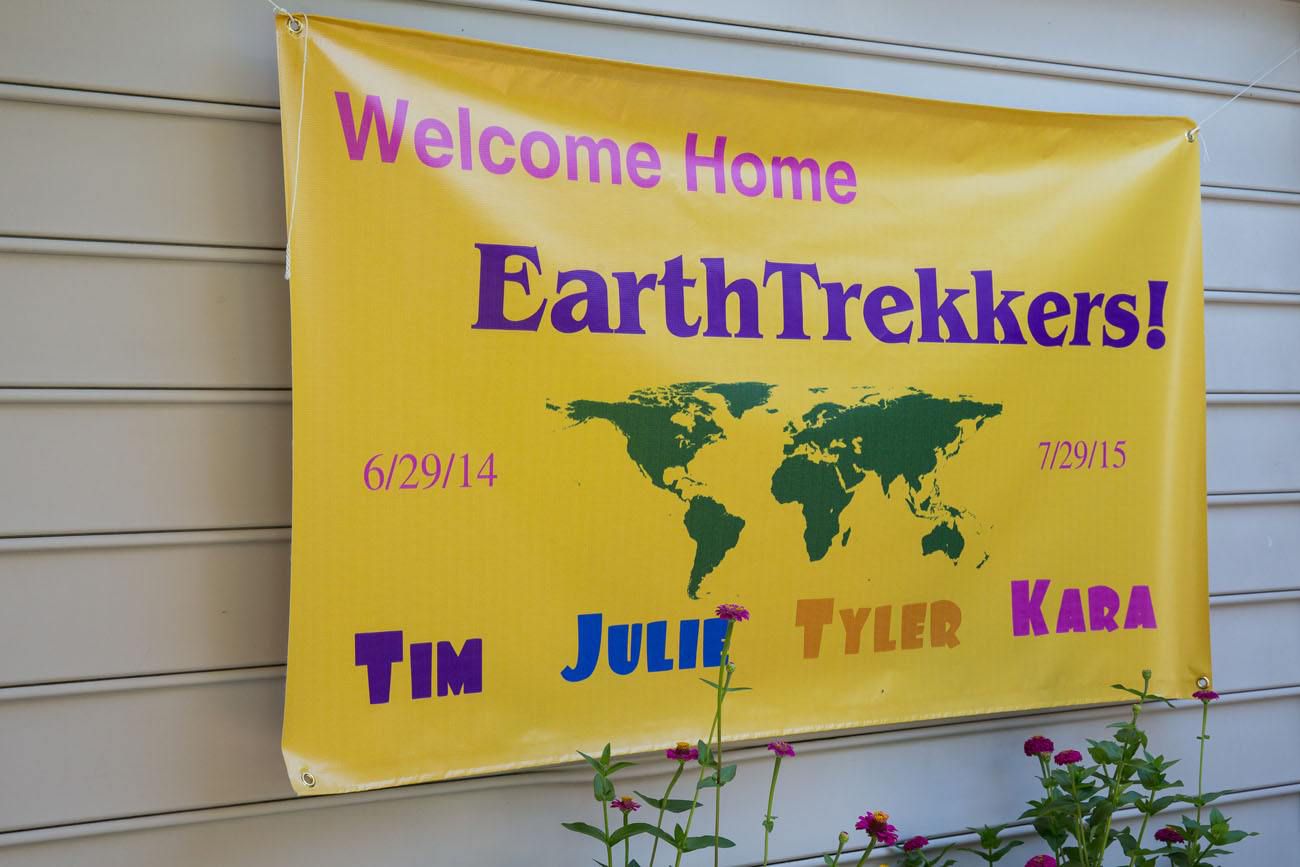 Earlier in the day, we made an attempt to get noticed on the Today Show. Like the lackadaisical travelers we have become, we rolled out of bed a little too late, our tardiness a result of the world’s worst case of jet lag paired with late nights spent working on this blog and scanning potential houses and rentals in Maryland. To say we were exhausted was an understatement.

Unfortunately, we arrived at the Today Show too late to get a five second cameo appearance, which we learned are filmed prior to the 7 0’clock start of the show. Hoping for the best, we grabbed spots in the crowd, hoping to be seen on camera fly-bys and aerial shots.

As we stood in the crowd, our Earth Trekkers sign and our Around the World sign did attract a lot of attention from those around us (just not from the people we really wanted to attract, the Today Show staff that works the crowd). We received several comments of “why are you standing out here, not inside, being interviewed by Matt or Savannah?” 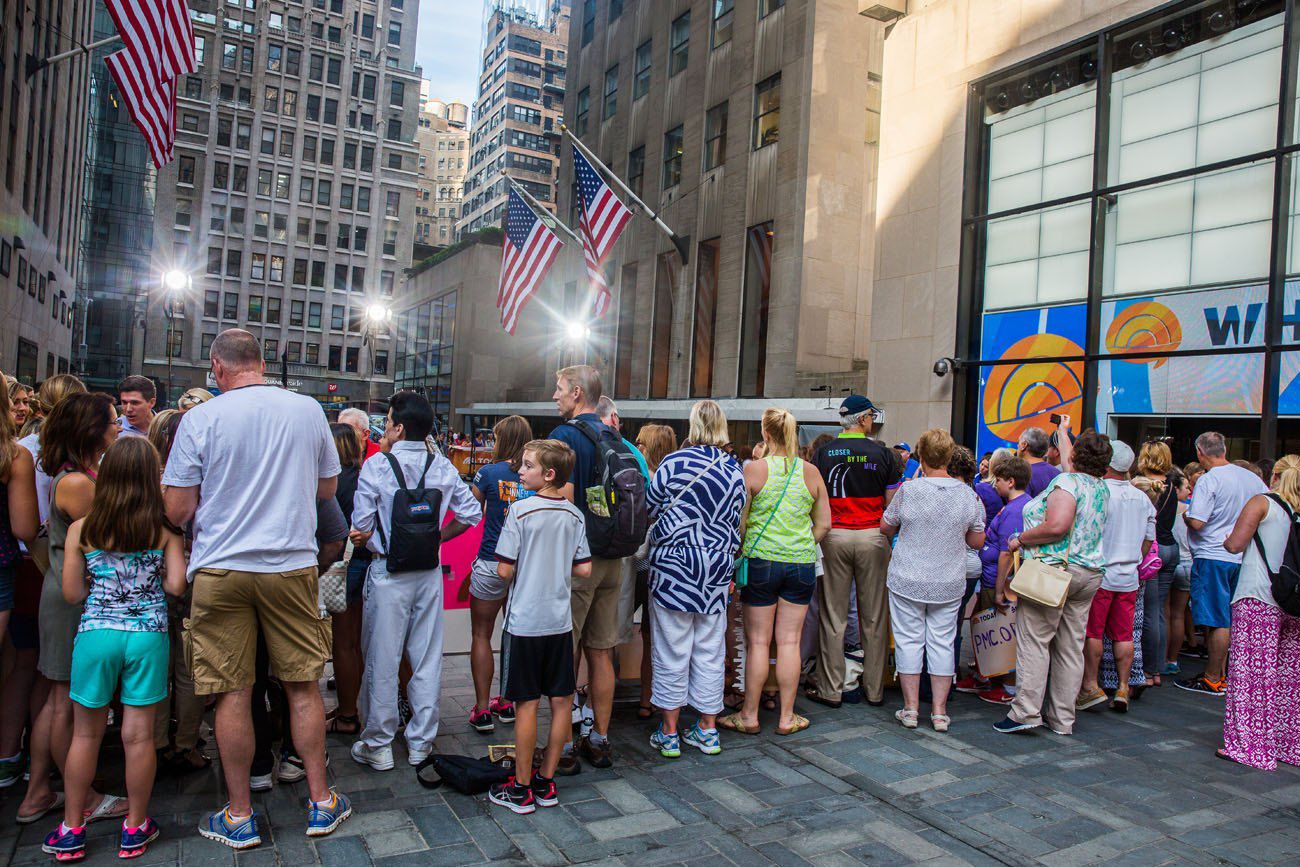 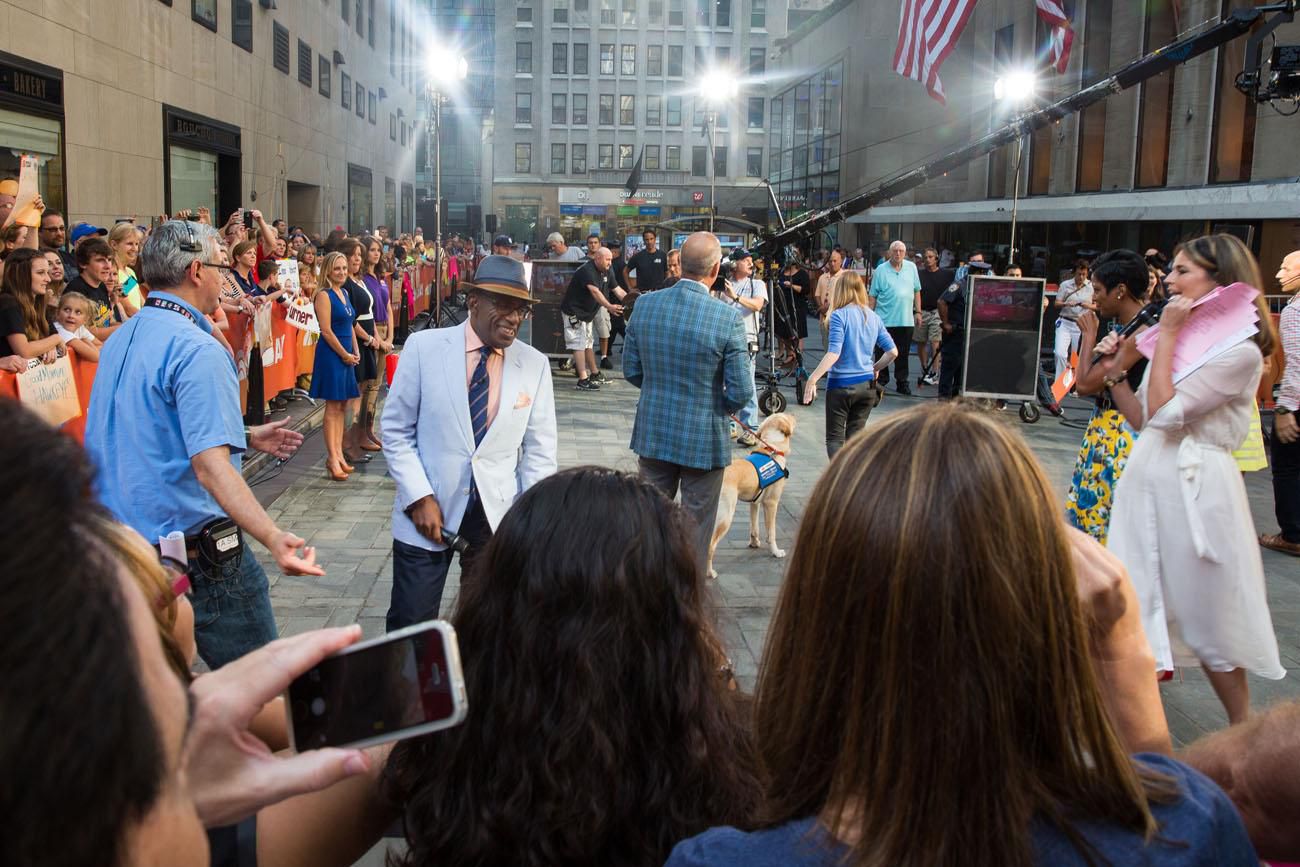 Towards the end of the filming, the crowds thinned out, giving us a front row spot and then two seconds on camera.  It was here that the Today Show crew noticed our signs, spoke to us about our adventures, took down our information, and hopefully this will make it to the right person for a future short segment on our Earth Trekkers adventures.

Back at our hotel, we packed up our things, lugged our backpacks across Manhattan in 94 degree heat to the Megabus, and were transported back to Maryland and our two very excited moms.

This past week was spent getting settled back into “normal” life, although things really have not been all that normal.

For one thing, we are trying to find a place to live for the upcoming year. We do not have much time, since we need residency in order to get Tyler and Kara registered with the public school system. The school year is just a few weeks away, so the pressure is on, something we are fine with. We know we made it harder on ourselves by coming back so late in the summer, but we wanted to stretch these travels as far and as long as possible.  Everything seems to work itself out in the end, one of the many things we have learned while traveling.

We arrived home on a Wednesday night and did not waste any time with the home search. Thursday morning we were all up early and meeting with our real estate agent, taking a tour of Howard County homes. It was exciting and it felt a little like sightseeing, only instead of staring up at Buddha’s or walking through museums, we were taking notes on number of bedrooms, size of the backyard, and which school district we were in.

All while searching for a new place to live, Tim and I have had the debate of rent versus buy. There are advantages to both and this is a decision we have gone back and forth on a lot.  Renting gives us the flexibility to pick up and move again if we so desire, or even take another long-term trip without having to sell another house. The likelihood of long-term travel in the future for us is very low, as we now feel like we have to get settled, get Tyler and Kara back into public school, and let them re-establish relationships with their friends.

As much as we would love to keep traveling, we feel like we have to add some stability back into our kids’ lives, and for us that means finding a home.

Currently, it is our thought that we would like to purchase a house, although this is not set in stone, and next week you may read that we ended up renting something. The uncertainty about our future continues…

Kathy and Valerie threw a very nice homecoming party for us last Saturday, when we were reunited with family and friends. We spent the day talking with cousins, aunts and uncles, nieces and nephews, and friends who have been in our lives for so long that they are more like family. My high school principal, Gene Streagle, and his wife came to the party, as well as Charles Levie, my trigonometry teacher from high school, a person we have stayed in contact with over the years and now teaches in Japan.

Also, it was awesome getting to meet our “fans,” people who found us through the blog and through that first Baltimore Sun article last June, that we became friends with the help of social media over the past year. Making these new friends was yet another gift we have received from this year’s travels. 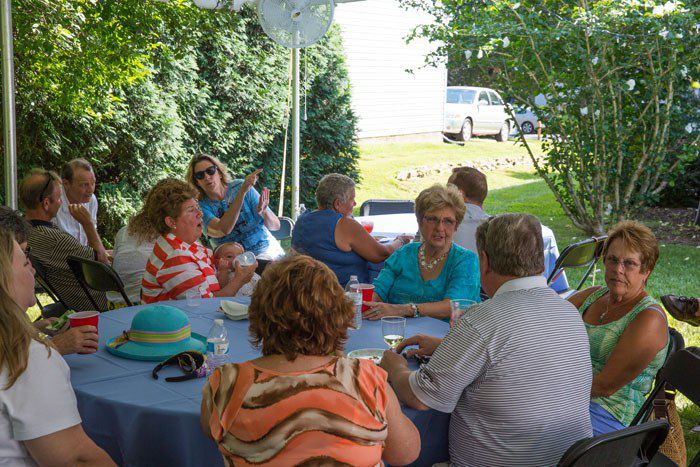 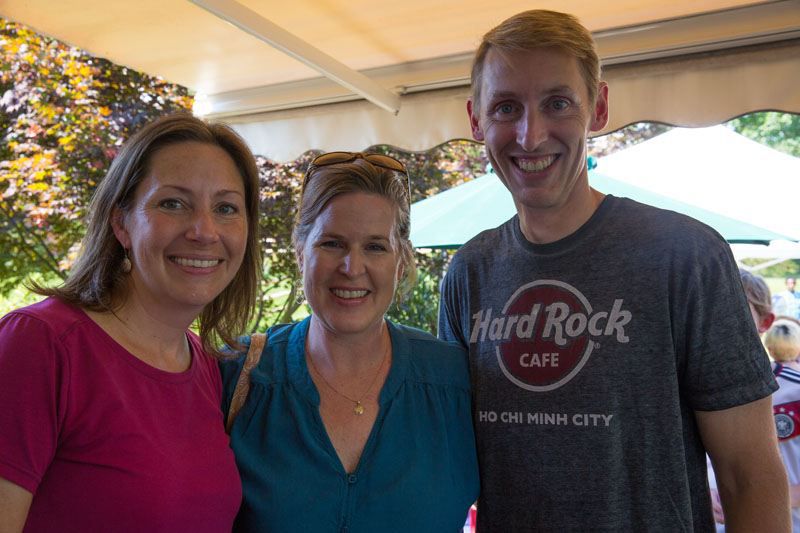 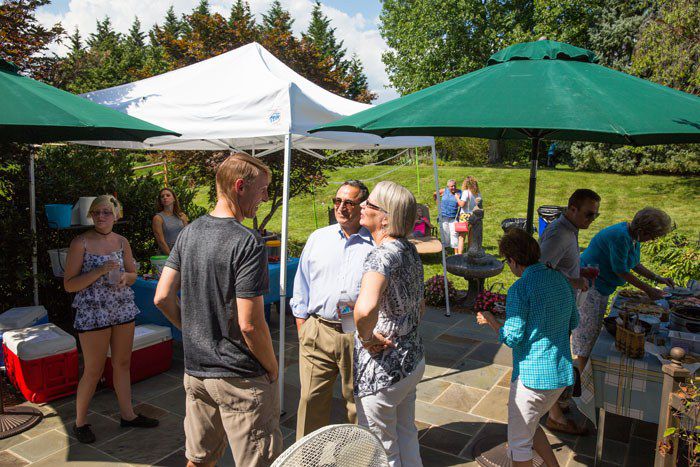 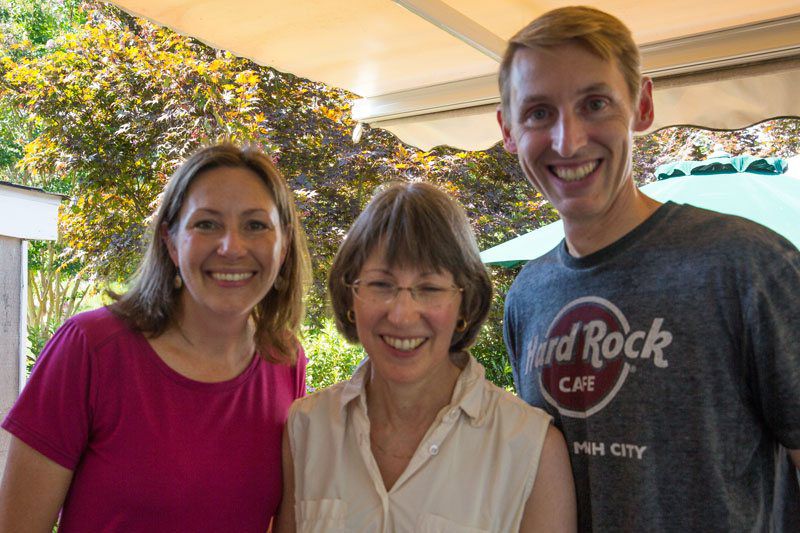 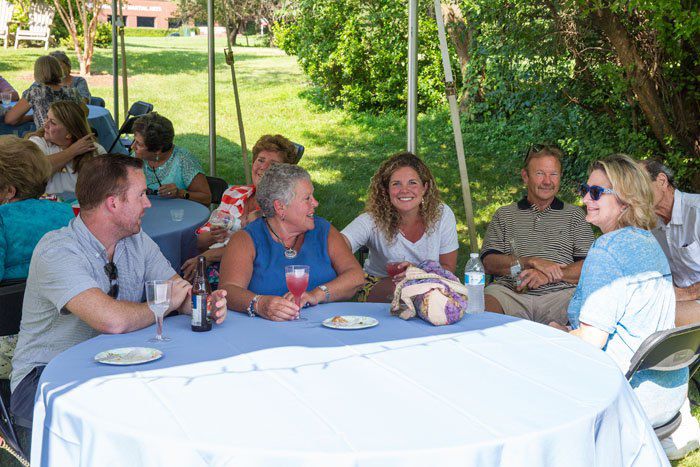 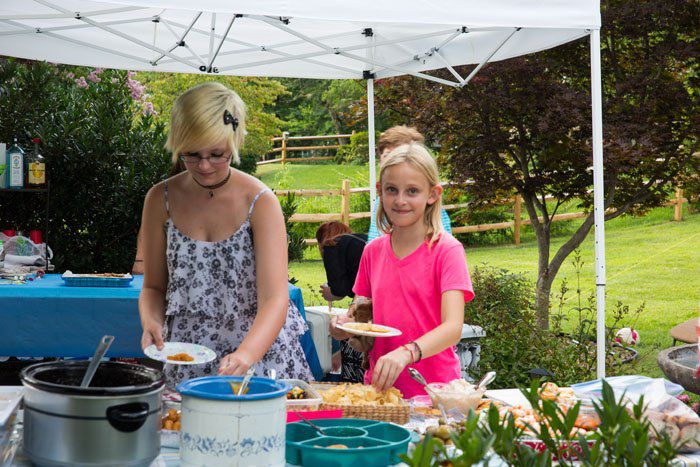 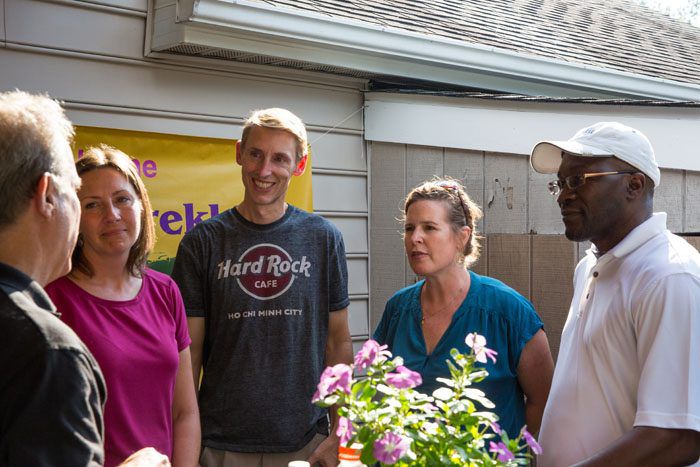 Getting Back into the Groove of Being “Home”

It did not take long to get into the groove of life in Maryland. We are so lucky that my mother is willing to let us crash at her house once again, easing our transition over the next few weeks. Once again I am sleeping in my old bedroom, Tyler and Kara are down the hall, each in their own bedroom.

I have read about the re-entry of other families and those first few nights back “home.” At first, it can feel so strange that even with the extra space, all of the family members end up sleeping in the same room, even when they could have their own room. Not us. Tyler and Kara were thrilled to have their own room and their own bed, happy to finally be by themselves again.

In fact, Kara was so excited to have her own space that once we stepped foot in Mom’s house, Kara immediately disappeared in her room for an hour.

What Has Been Different?

I am back to doing laundry again. While traveling, we would get by with just one load per week. Now that we are back in a house, I am once again doing three to four loads per week, washing not only clothing but also sheets and towels. It may not sound like a big deal, but it does feel strange to me.

Once again we know the day of the week. A strange thing happened when long-term traveling…we lost track of time, many times not knowing which day of the week it was.  Once arriving back home, no longer is that the case. Honestly, I prefer it this way…it always felt strange to be lost in time while traveling.

Kara has said something several times that she never once uttered while traveling, “I’m bored.”  Yes, our kids may have grown tired of temples and sightseeing, but never did they say “I’m bored” while traveling. Now that we are home and they have more downtime than they are accustomed to, Tyler and Kara are now saying those same words that so many other kids say during the summertime months.

We have been receiving our share of the so-called “fifteen minutes of fame.”  Our two seconds on the Today Show were pretty cool, but add to the list a five-minute interview with Mary Beth Marsden on WBAL radio and an interview on the local evening NBC news.

Future publicity spots include a potential follow up article in the Baltimore Sun as well as a documentary about our travels on The Baltimore Sun Darkroom site, set to be published in a few weeks. We are hoping that all of this publicity makes Earth Trekkers more popular, aiding our future travel business. 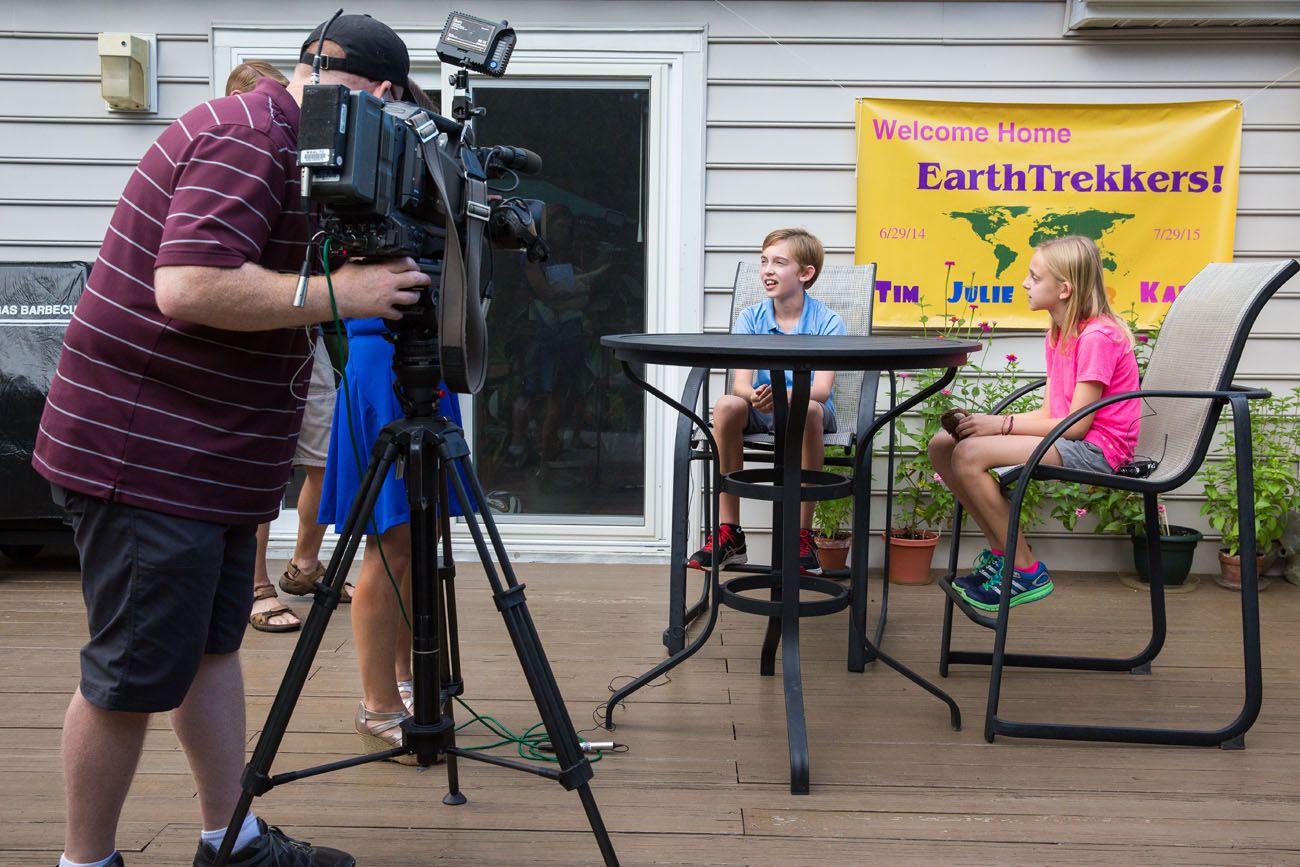 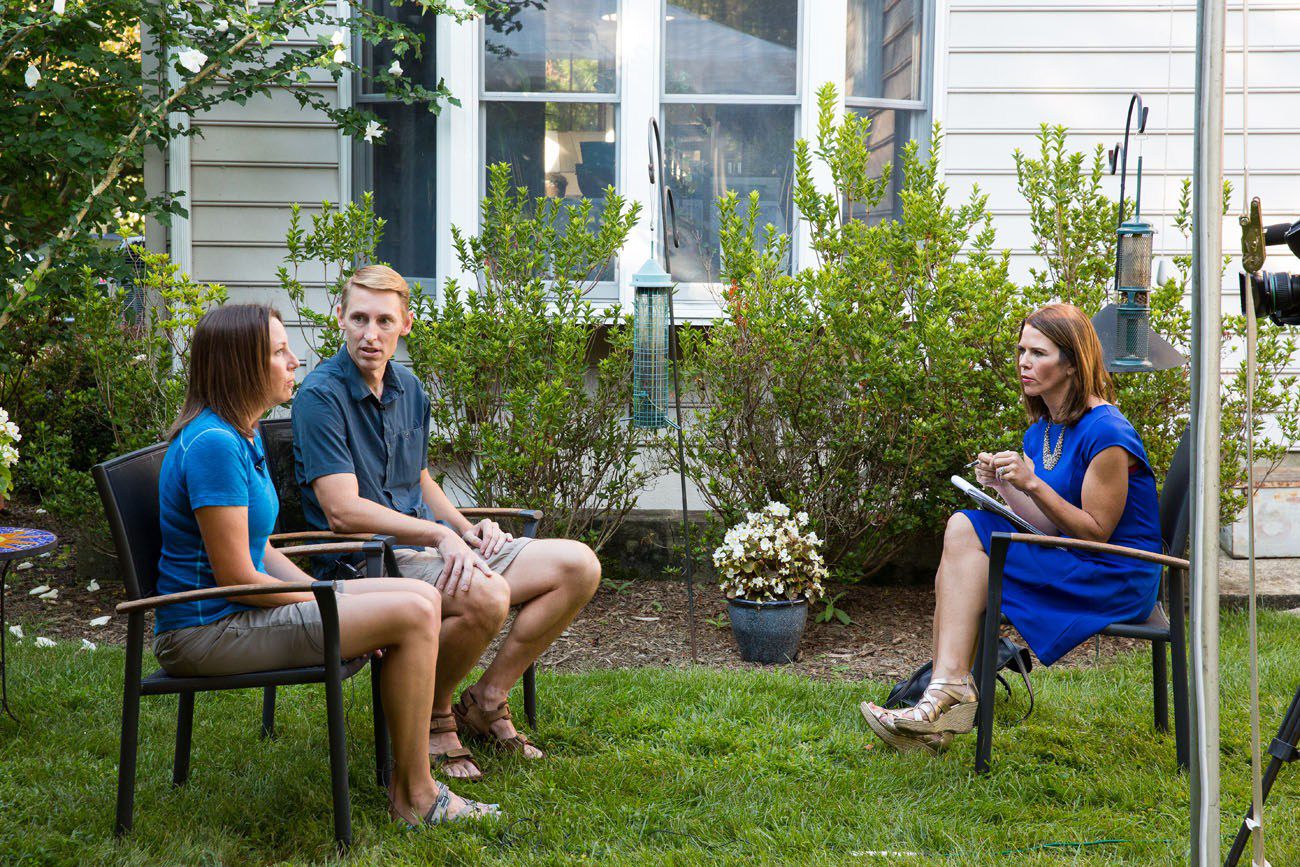 What Has Been Hard?

There have been moments that have hit home what we have accomplished. Arriving back in Howard County helped Tim and I really realize just how special this last year was.

We did it! We successfully traveled around the world without any major disasters.

When first starting out on the trip, we wondered if something would happen to send us home prematurely, like a broken leg, bad illness, or a sick family member. Fortunately, none of that happened, so Tim and I feel a certain amount of accomplishment for what we just did.

Looking at our photos of places like Nepal and Myanmar mean so much more to us now than they did even two weeks ago. If it makes any sense, looking at a photo of us riding elephants in Thailand while sitting in my Mom’s house in Howard County seems so much more special than viewing that same photo while in Singapore.

Being home and looking through the mountains of journals and the gigabytes of data amassed in thirteen months of travel has been awesome. We truly made a lifetime of memories in such a short period of time. 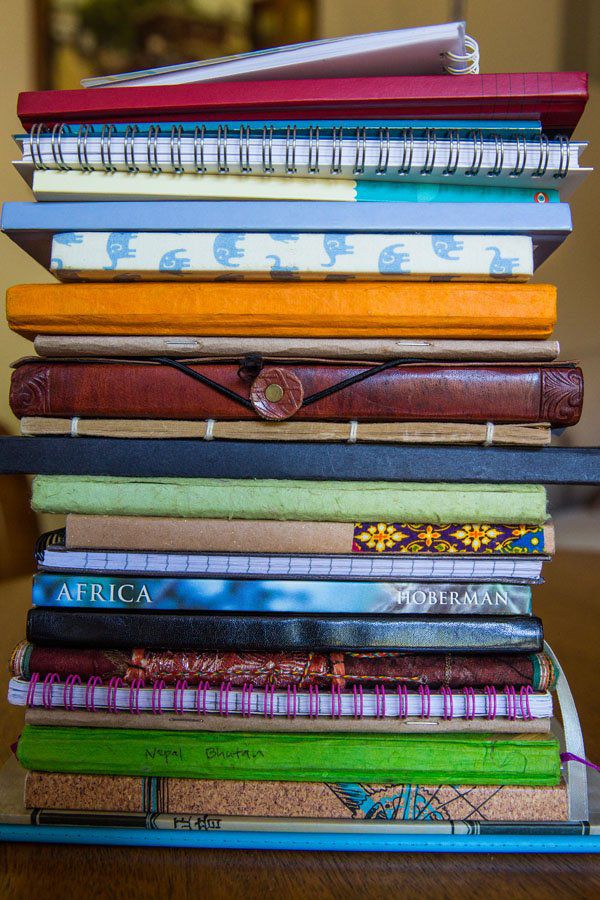 My stack of journals from a year around the world

Tyler, Kara, and I each wrote in a journal everyday of the trip. The amount of written material we have generated is unbelievable, and second to our photos, are my favorite possession from the trip. I am now writing in my 24th journal, priceless documentation of what we have done this year. I cannot wait to go back and read about everything we have done.

As we traveled, we bought souvenirs and periodically shipped them to my Mom. She now has boxes in her basement that have come from places like Nepal, Cambodia, and Australia. We sent back a gong from a Buddhist monastery in Nepal, a didgeridoo from Australia, and Buddha’s from Cambodia. We have not gone through everything yet, but it has been fun looking at these souvenirs, reminding ourselves of these far off places.

The hardest part for me has been unpacking our backpacks for the final time. I did this so many times, always the start of new adventures in a new city. This time I am unpacking them for good and have no idea when they will be filled with Under Armor shirts and hiking shoes again. In fact, it has been so hard that one backpack still sits half unpacked, almost like completely emptying it out is another reminder that our travels are over.

The past seven days have been a whirlwind, between readjusting into life in Howard County, meeting up with friends and family, house hunting, interviews, and laundry (ha ha!).  The busy times will continue, as we still need cars, to get Tyler and Kara registered with the public school system, meet up with friends we have not been able to see yet, and to finalize our living situation for the upcoming year.

The good thing about being so busy is that we have not had time for the post-trip depression to come creeping in, another facet of coming home after long-term travel that so many people seem to deal with. We will continue to update the site as things continue to change, so stay tuned!