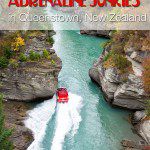 This post could have been called a lot of things.  Blowing the Budget BIG TIME.  Having the Time of Our Lives.  Getting Our Adrenaline Fix.  Best Three Days Ever.  #Neverwanttogohome.

We had an absolutely amazing, action packed three days here. And there is still so much to do when we come back, and come back we will definitely do.

Forget Fiji! Queenstown, New Zealand was pure paradise for the four of us. We have all fallen head over heels in love with this part of the world.

Getting to Know Queenstown

Our time in Queenstown started off fairly sedate. We arrived from Te Anau in the pouring rain, limiting our options for outdoor activities. This was the perfect day to do a little shopping at the Queenstown Mall, buying a few small souvenirs.

We also paid a visit to The Winery, a wine tasting bar where we could sample over eighty New Zealand wines. The four of us relaxed in comfy leather chairs, shared an amazing meat and cheese platter, and Tim and I sampled some New Zealand wine. What a nice, calm start to our Queenstown experience.

Oh, how things were about to change! 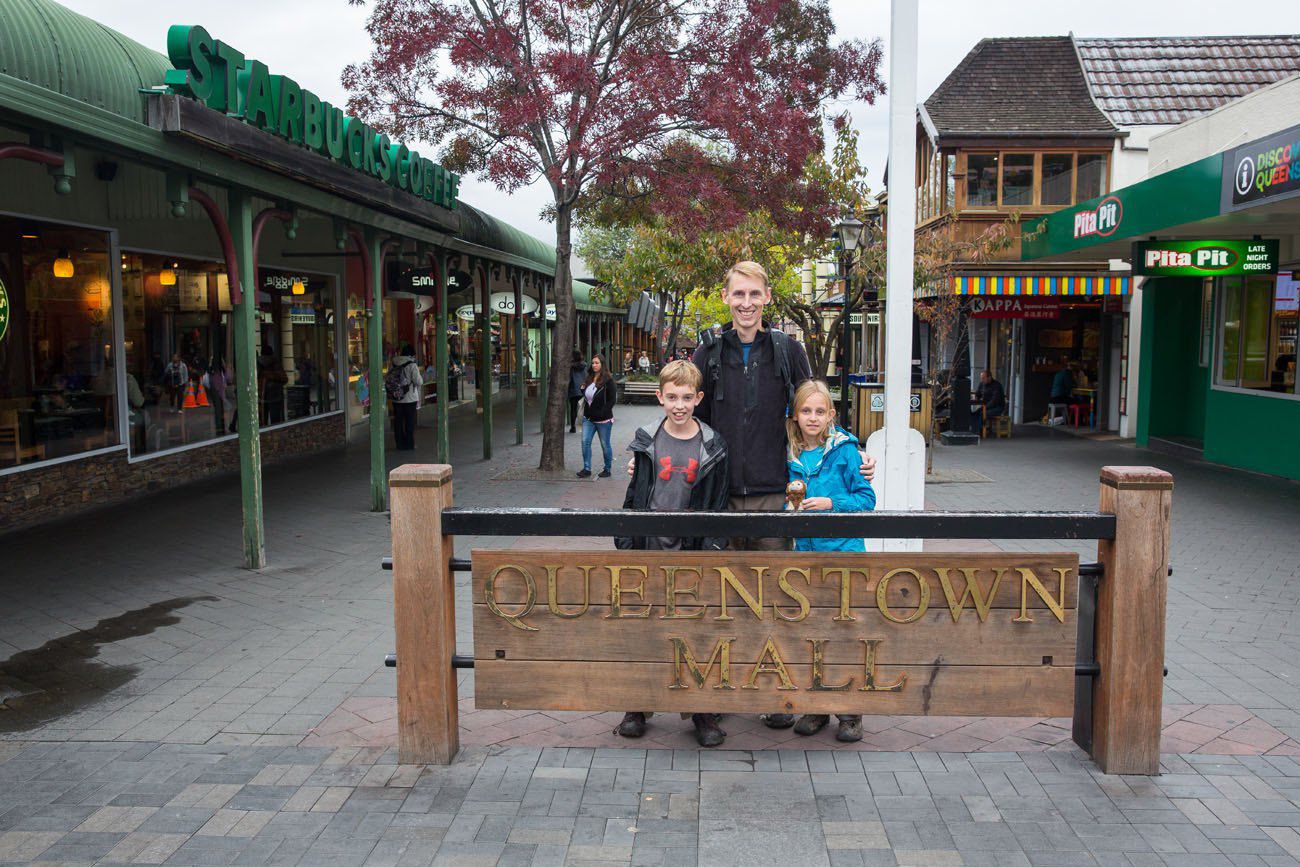 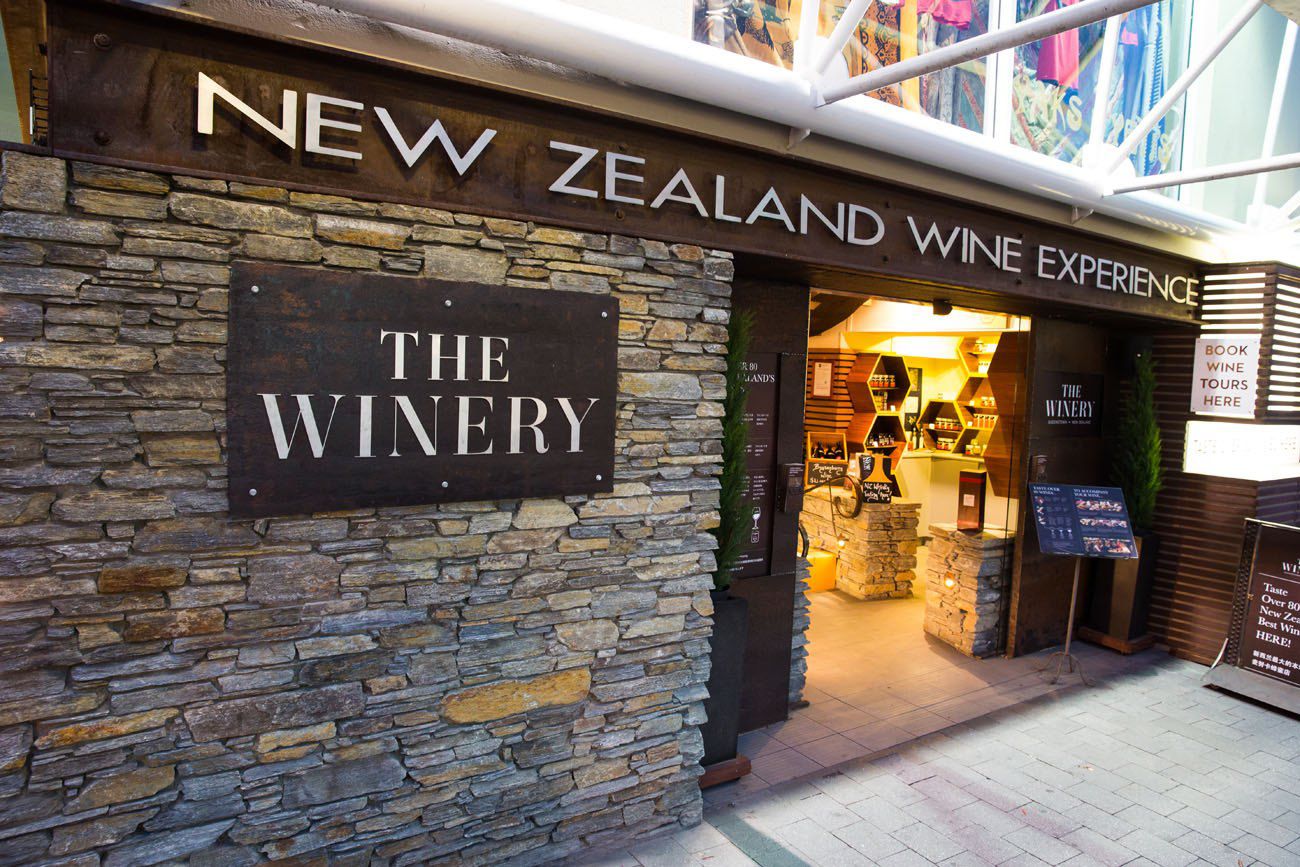 It was still cloudy and drizzly on our second day, but the clock was ticking and there were many things that we really wanted to do. As they say in Norway, there is no such thing as bad weather, just bad clothing. This statement also holds true for New Zealand, as there were plenty of people running and mountain biking in the rain.

A very popular thing to do in Queenstown is to take a jet boat ride through the canyons. Imagine boarding a speedboat that sends people hurtling through narrow canyons, driven by a crazy man at the wheel that steers the boat within inches of the rock walls. Add in 360° turns and very fast speeds and we have our first action packed adventure in Queenstown.

We chose Shotover Jet, mainly because they had advertisements plastered all over Queenstown. Our ride lasted about twenty minutes and was fun for our entire family. Kara was the biggest fan of this ride and as soon as it was over was asking to go again. 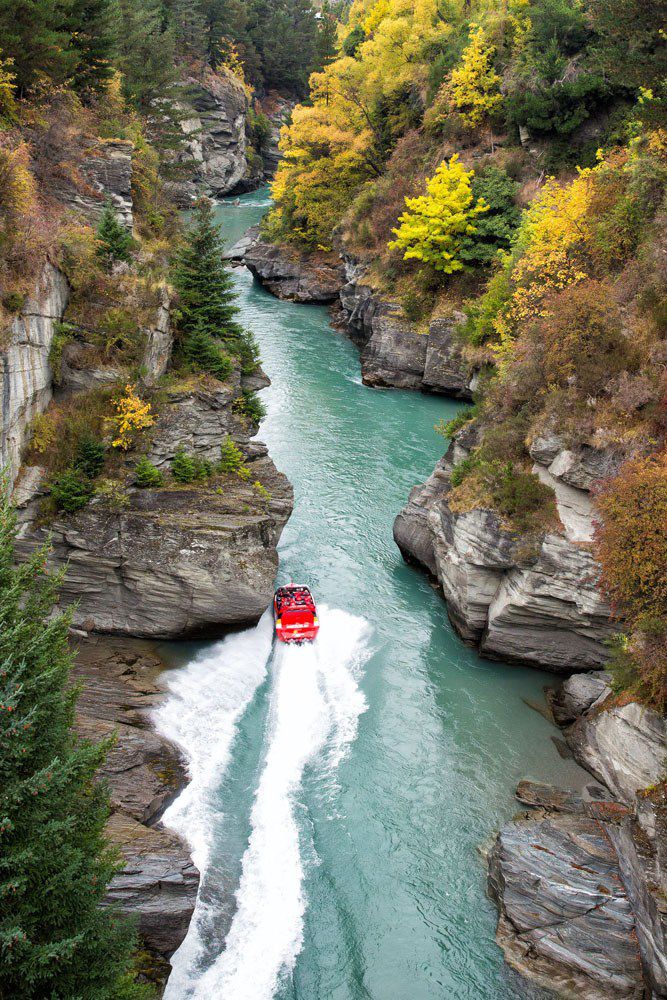 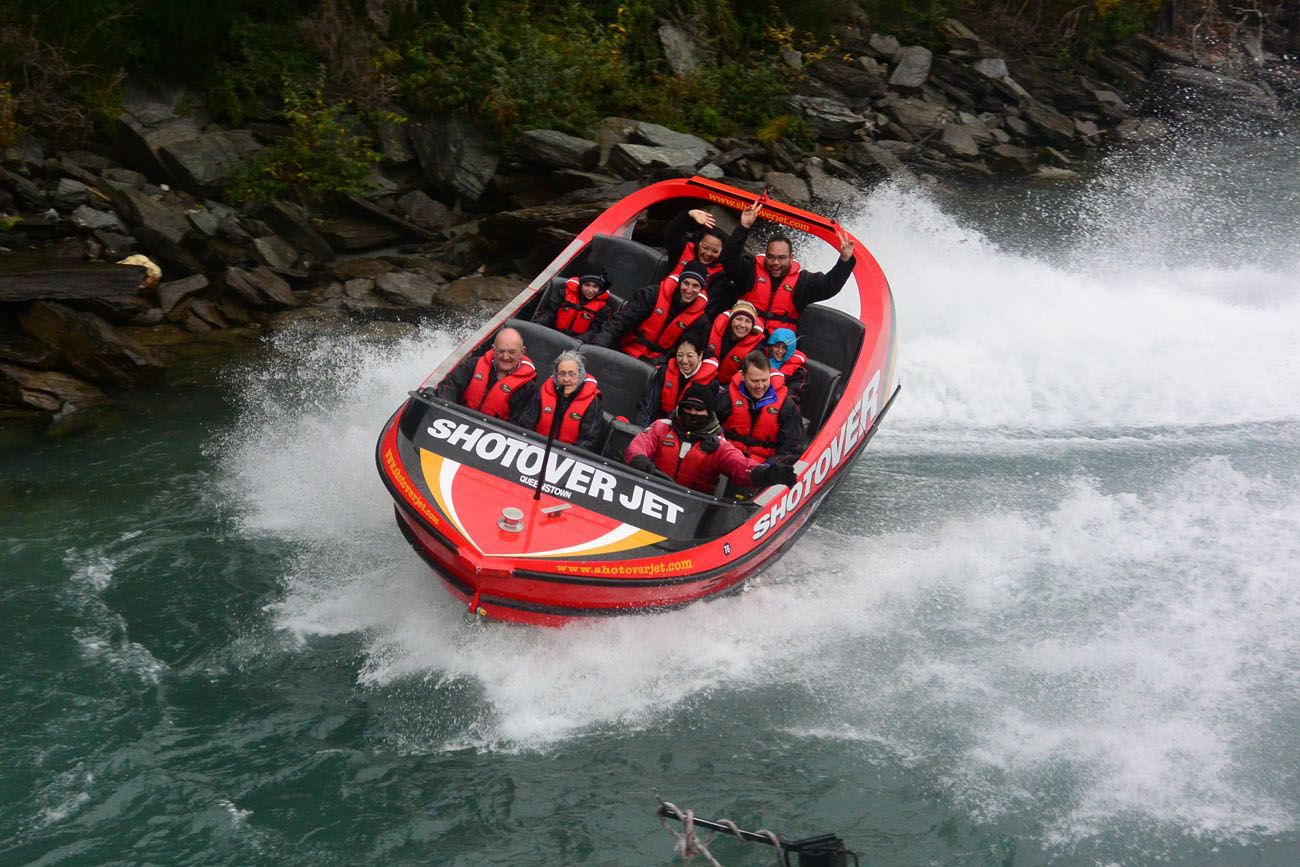 Later in the day, while taking a scenic drive around Arrowtown to admire the fall colors, we decided to take a look at Kawarau Bridge. All four of us were considering bungy jumping but none of were 100% sold on the idea yet.

Were any of us really brave enough to throw ourselves off a bridge? Apparently we are. 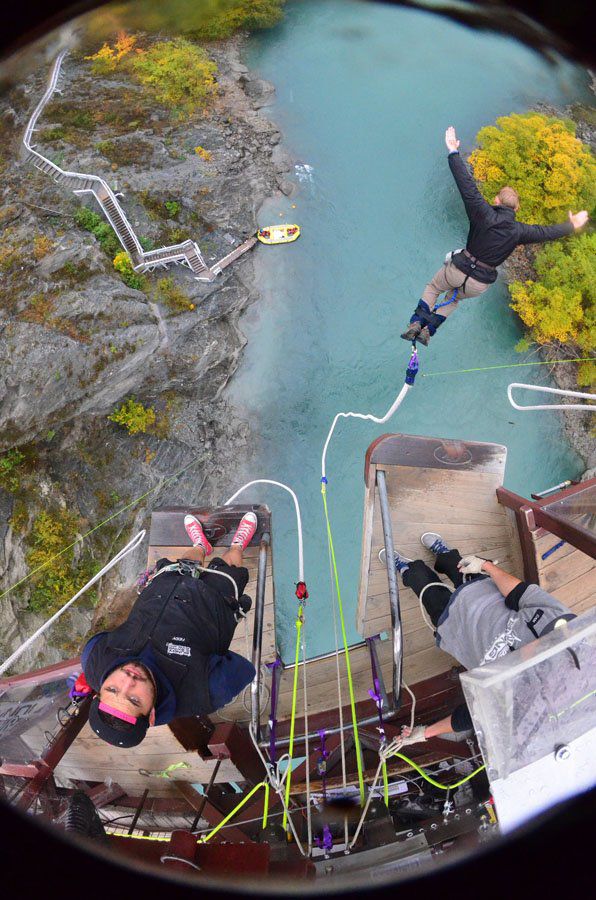 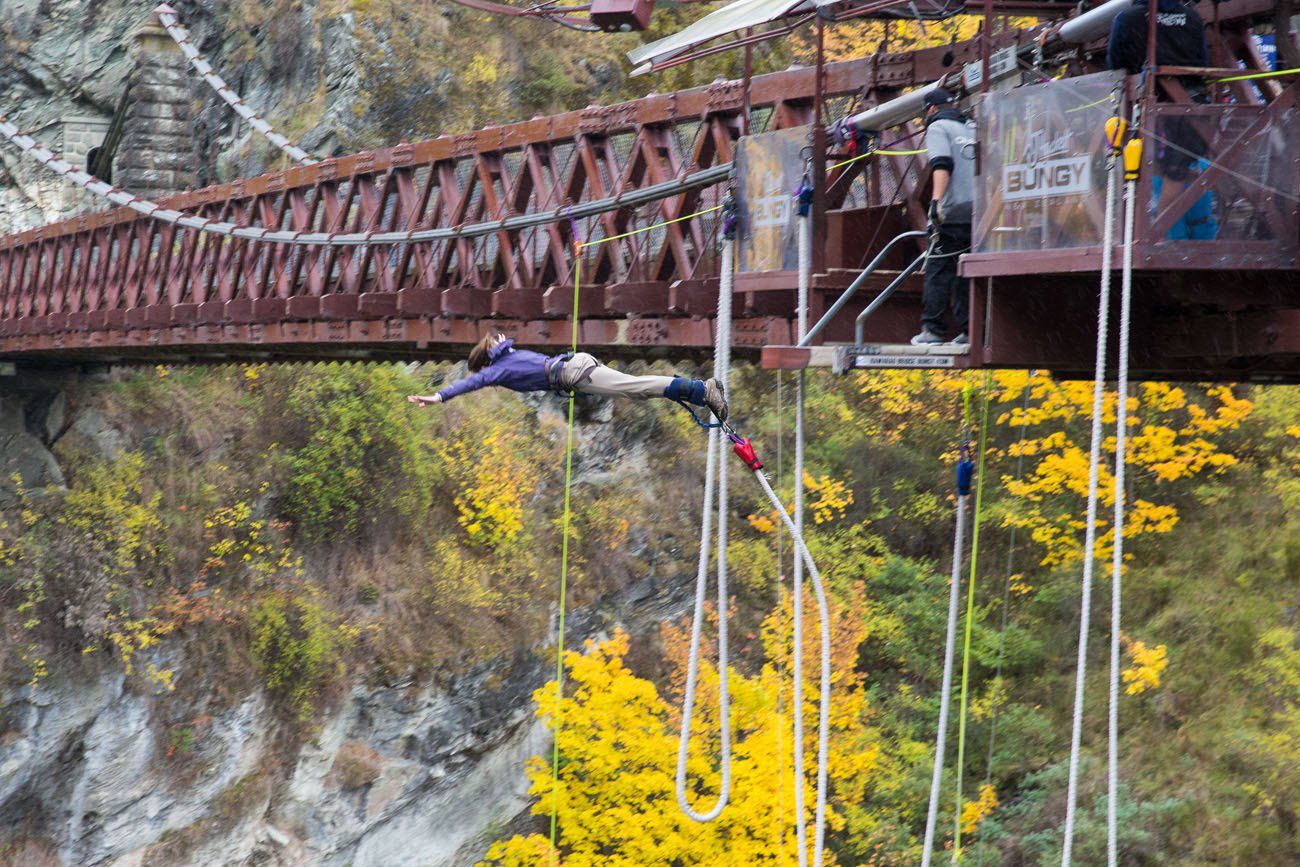 Tim and I both did our first bungy jump off of this bridge, making our visit here much more than just a sightseeing visit. For the rest of the day, Tim and I were pumped up and very proud of ourselves. With new T-shirts showing off our accomplishments we went into Queenstown for dinner.

So, how does our family celebrate bungy jumping in Queenstown? With giant cheeseburgers at Fergburger. Fergburger is an institution in Queenstown and several people we met recommended having at least one meal here. These burgers were delicious! Tyler, who missed out on bungy jumping by falling short of the minimum weight by 2 kg, needed to pack on some pounds, and fast! He ate his entire burger, hoping it would add on the necessary weight for bungy jumping tomorrow.

Read more about our bungy jumping experiences in our article A Tale of Four Bungy Jumps. 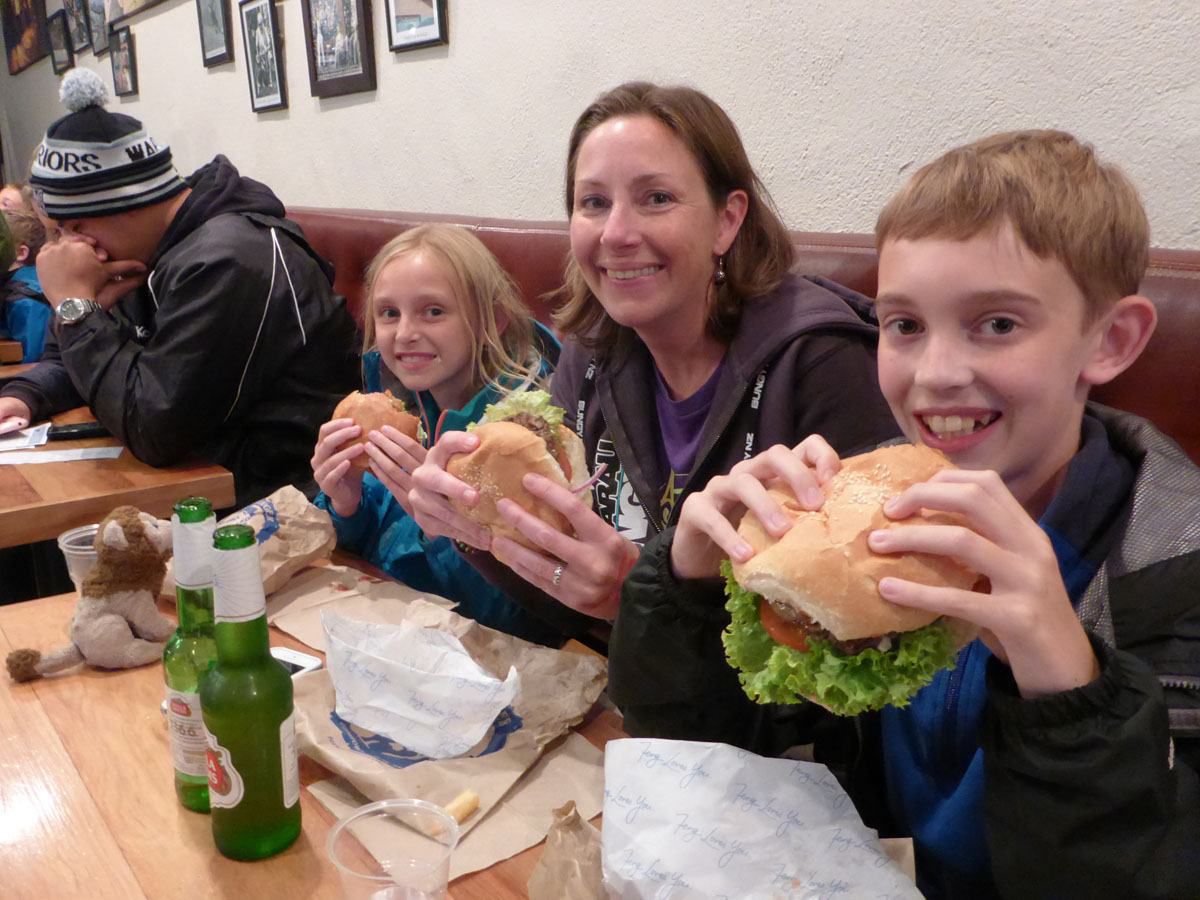 Our third and final day was another big day. The rains had finally come to an end but it seemed to take forever for the clouds and fog to burn off.

We rode the Skyline Gondola up to the mountain peak, an event in itself, but all we could see at first were clouds and fog. While on the mountaintop we all rode The Luge twice. The Luge is similar to the toboggans we have been riding in Germany and China, except these we needed to steer. The metal toboggan track was gone, replaced by a concrete track. Tim and Tyler got the hang of it right away. It took Kara a little bit to get the hang of the steering, but it was kind of funny as she bumped into curbs and came to a screeching halt as she got stuck on the shoulder of the track.

And then it was Tyler’s big weigh in for bungy jumping. With last night’s Fergburger, a big breakfast today at McDonald’s, some extra clothing and my sweatshirt, he weighed in at 35 kg. Having the proper weight is not a safety issue but there needs to be a minimum weight for the bungy cord to work properly.

By now, Tyler was very excited and nervous. The fog still had not burned off, which was probably a good thing. Jumping into the mist and not being able to see how far he would fall really helped take away some of the scariness for Tyler.

He got into his harnass and then Tim and I watched as Tyler, without hesitation, got a running start and made the leap from the platform. He let out a scream of surprise as he started his fall and somehow he even did a front flip. Tyler had a blast and currently holds the family record for longest bungy jump. The jump from Kawarau Bridge was 43 meters and Tyler’s jump from The Ledge Bungy was 47 meters.  Go Tyler!

Finally, it was Kara’s turn. She was nowhere close to the 35 kg necessary for a bungy jump so she did the Ledge Swing instead. Kara, our fearless one, was not nervous at all. She was just very, very excited.

Kara had to dangle in midair and pull a ripcord that would set her free. What Kara wasn’t expecting was the initial drop, almost identical to bungy jumping, that sent her falling much faster than she was prepared for. As Kara made that first drop she had such a look of surprise and terror on her face. She was so scared that she couldn’t even scream. But as she swung out over a misty oblivion, Kara let out a whoop of delight, and like her mother, was giggling like crazy. It was so good that she went back for seconds. 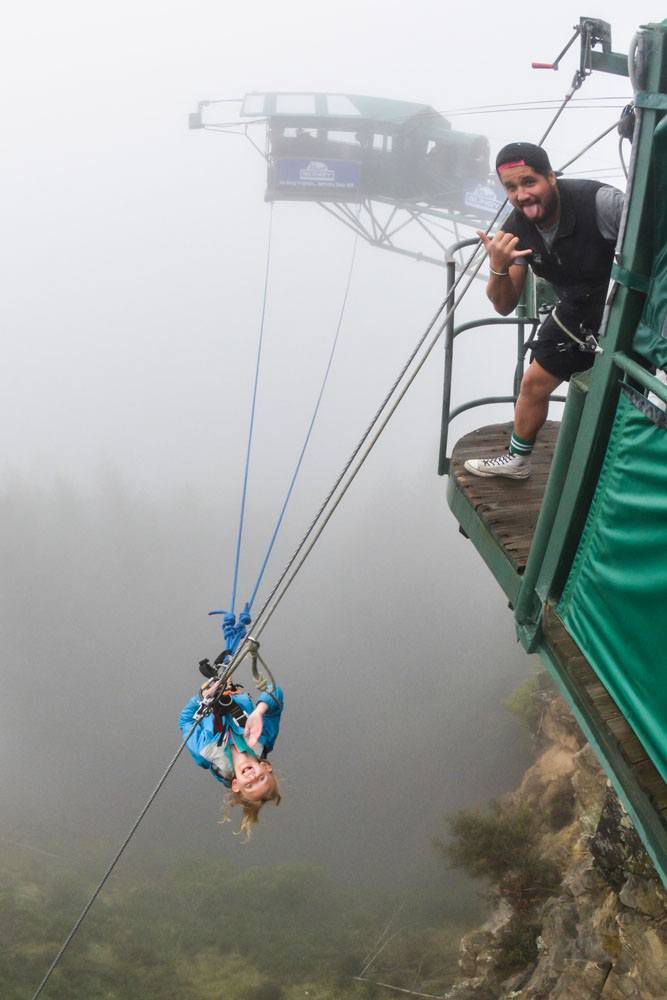 Just forty-five minutes after Kara’s crazy swing the fog suddenly disappeared, revealing a stunning scene of Queenstown down below. Too bad Tyler and Kara couldn’t have jumped when it looked more like this. 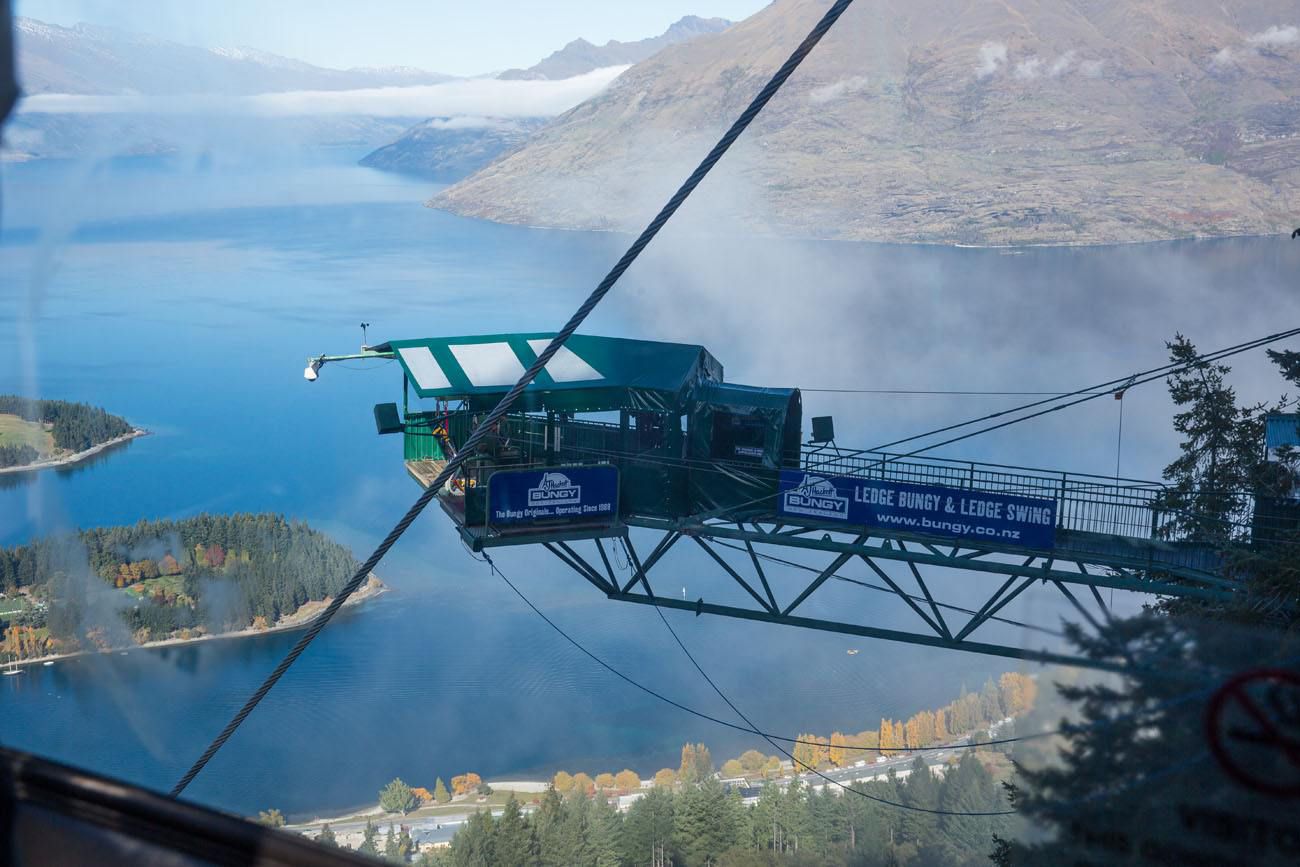 Our final adrenaline filled activity was paragliding. Now that the clouds were gone we were all very excited for some amazing views of the area. Paragliding was another first for us. We used Coronet Peak Tandems, who fly from Coronet mountain located twenty minutes away from Queenstown. Each of us was paired up with a pilot. We wore body harnasses to which were attached a seat for when we were in flight.

One by one, with the pilot strapped to the back of each us, we each ran toward the edge of the mountain, hoping that our parachute would lift us off of the ground before we went tumbling down the hillside. It is a very strange feeling to be running with all of your might and then slowly feel yourself being lifted off of the ground.

All four us made it into the air without any mishap. We are flying!! I flew with Angus Tapper, the man who holds the record for New Zealand’s longest paragliding flight, going a distance of 231 km. He was very serious and reserved, not as crazy and as easy going as the bungy Jump Masters.

Our flights were very smooth, very scenic, and over very quickly.  The flight lasted about fifteen minutes and during this time we had excellent views of the countryside. Honestly, after bungy jumping, paragliding seemed almost too sedate. Kara said she was bored throughout the entire flight. It’s nothing I would do again, at least not tandem, although there is some appeal in going solo. Maybe I should take some lessons! 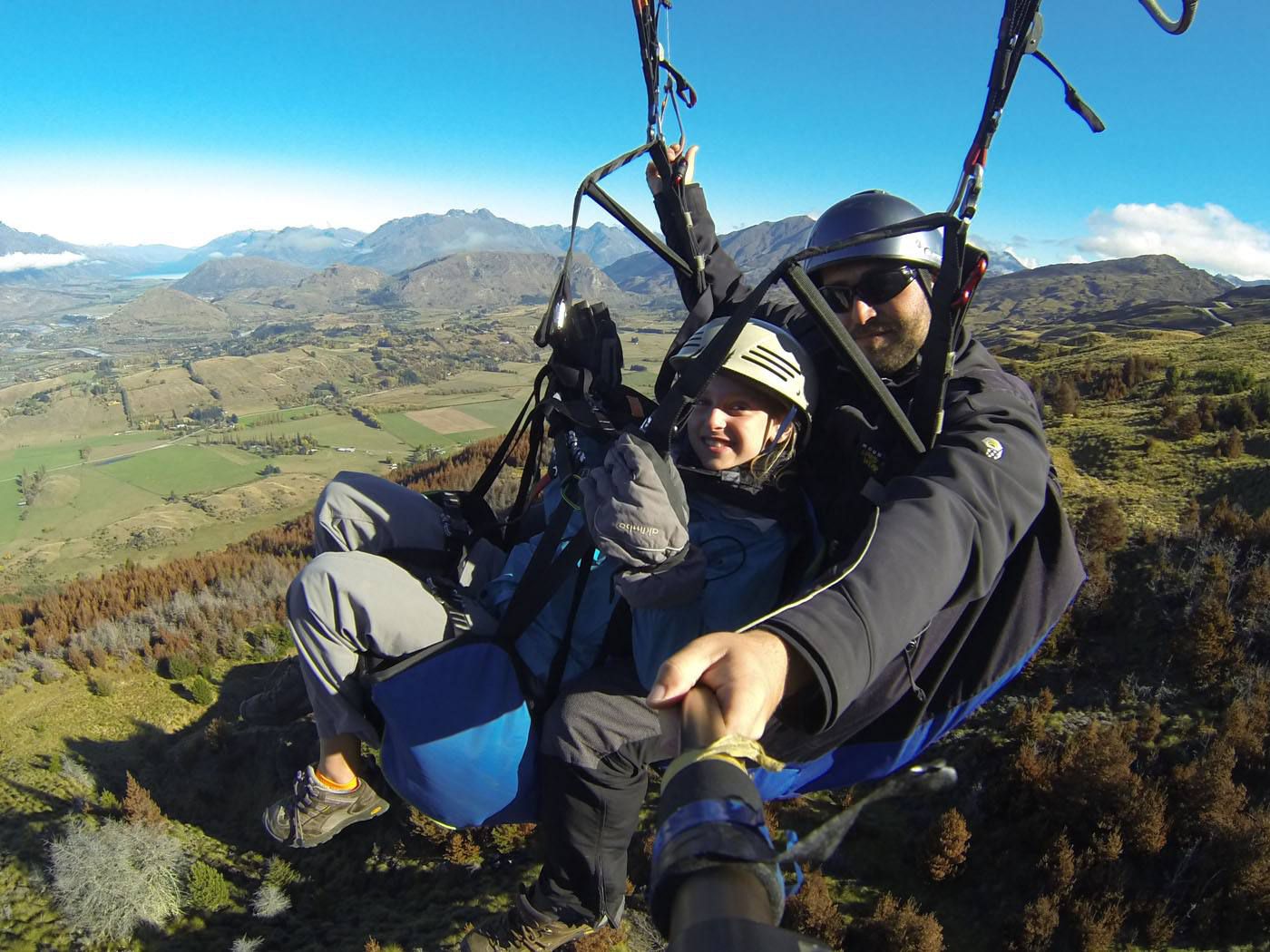 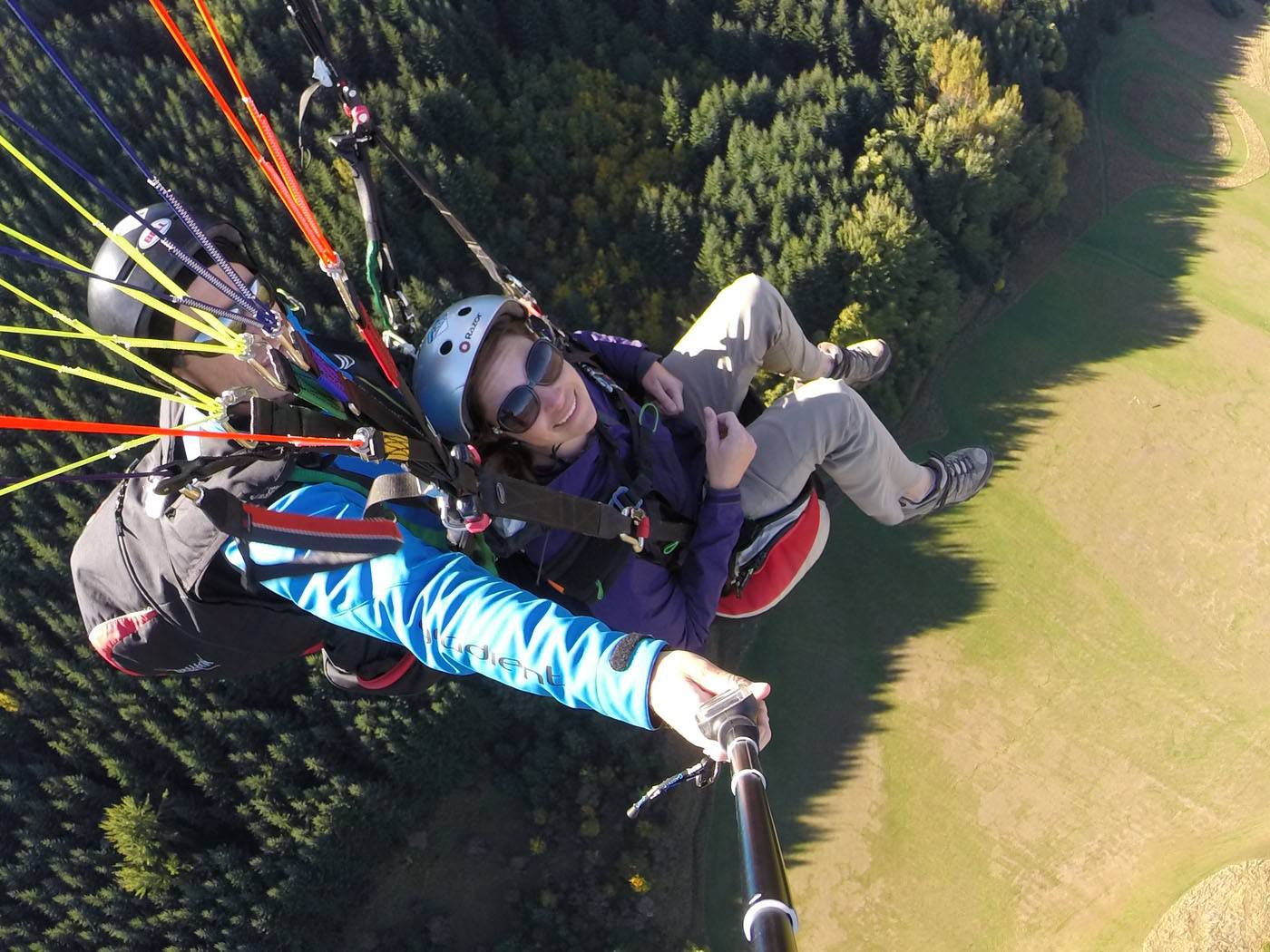 This concludes the most action packed three days of our trip. The four of us had a blast, loving every minute we spent here, wishing we had some more time. It was so hard to say goodbye to Queenstown, our favorite place in 297 days of travel, but we still have so much to look forward to.

Queenstown, New Zealand…we will be back someday!

NEW ZEALAND ROAD TRIP: With 3 weeks in New Zealand, visit the highlights on a road trip to the North Island and South Island. If you have less time, you can shorten this itinerary by spending 2 weeks on the South Island.

NEW ZEALAND WITH KIDS: Put Hobbiton, the movie set for The Shire in The Hobbit and The Lord of the Rings trilogies, on top of your list. Kids will also love sleeping in a silo and spending some time on the North Island.

MILFORD SOUND: The Milford Sound is one of the most beautiful places to visit in New Zealand. Learn how to visit it, and hike to Key Summit, in our article How Day Trip from Te Anau to the Milford Sound.

Planning a trip to New Zealand? Read all of our articles in our New Zealand Travel Guide. 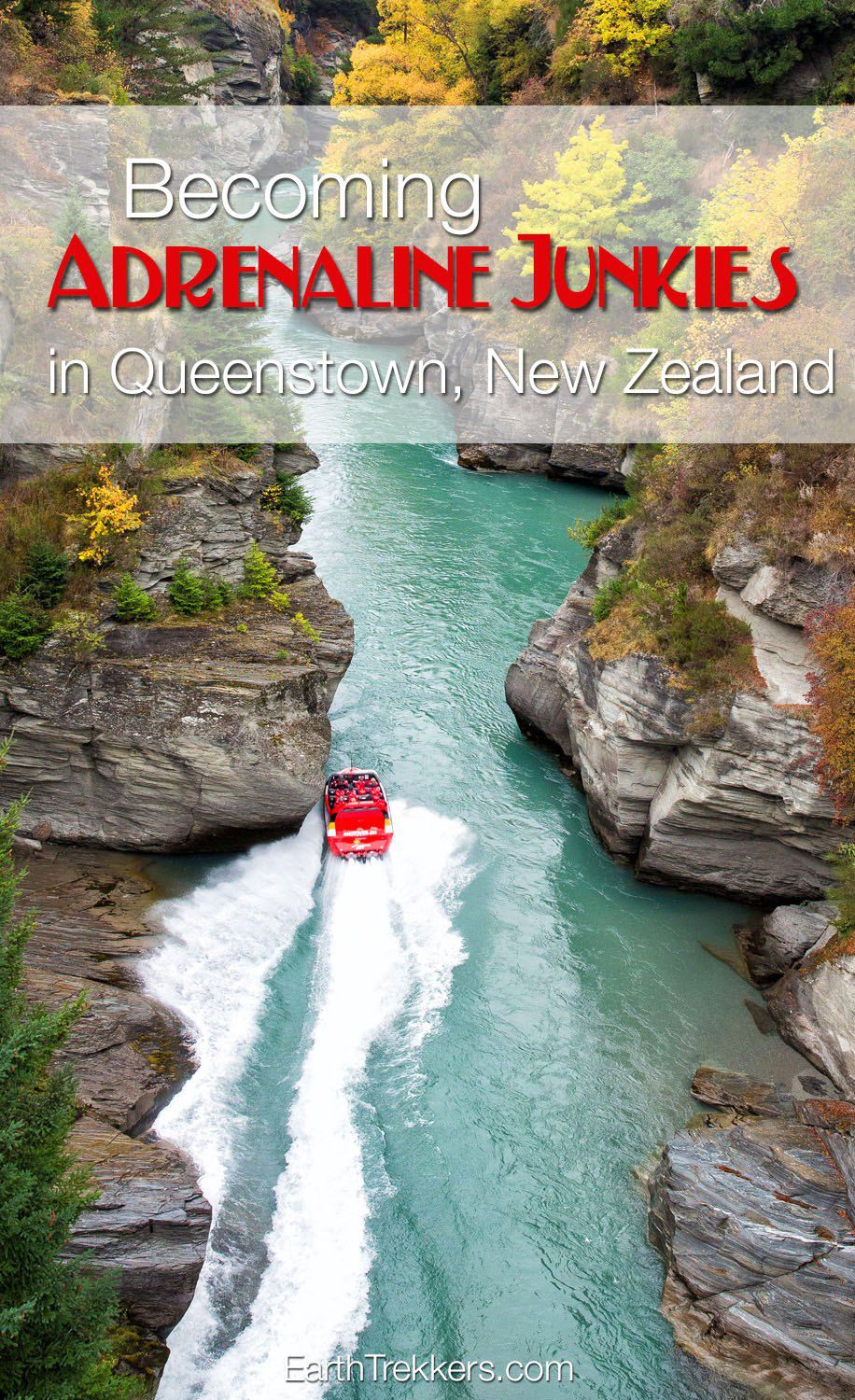