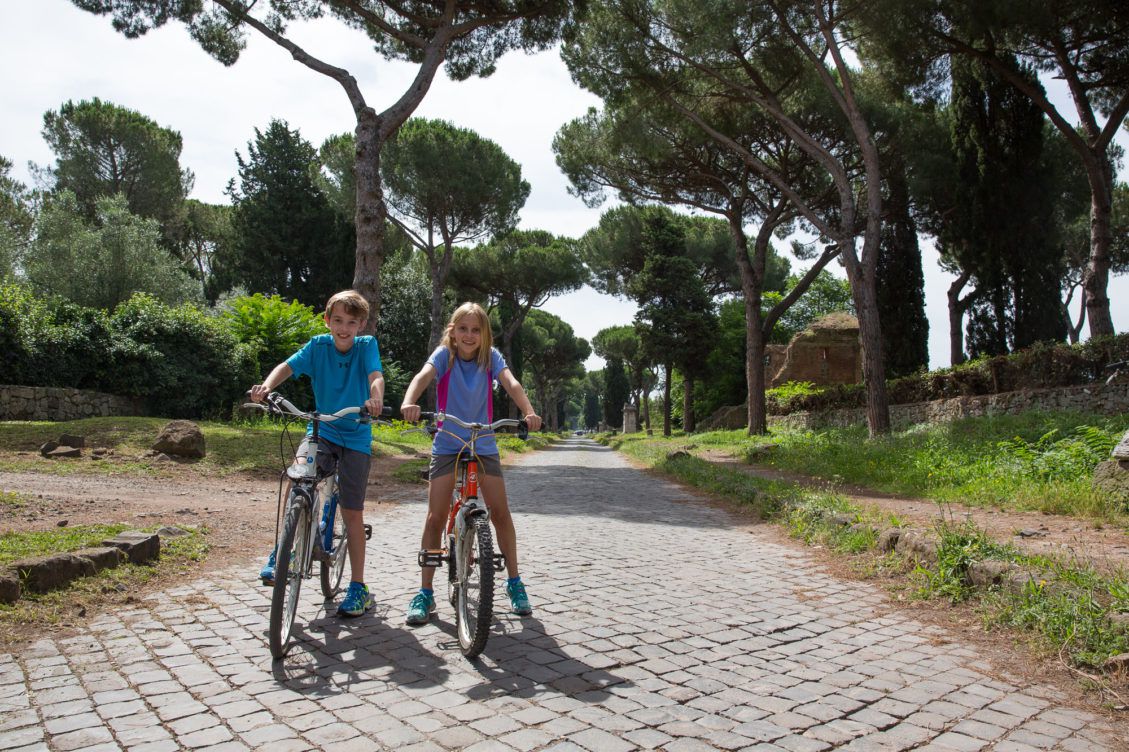 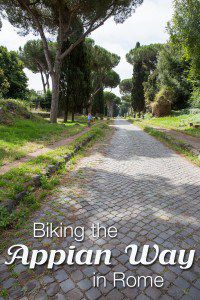 After spending two solid days touring Rome’s must see sights, we chose to go off the beaten path and bike the Appian Way. The Appian Way is one of Rome’s ancient roads, connecting Rome to the Adriatic Port of Brindisi. This road was a marvel of Roman engineering at the time it was constructed, 2000 years ago. Today it is a place for biking, viewing ancient Roman ruins, and taking a break from the hustle and bustle and crowds of tourists in Rome. 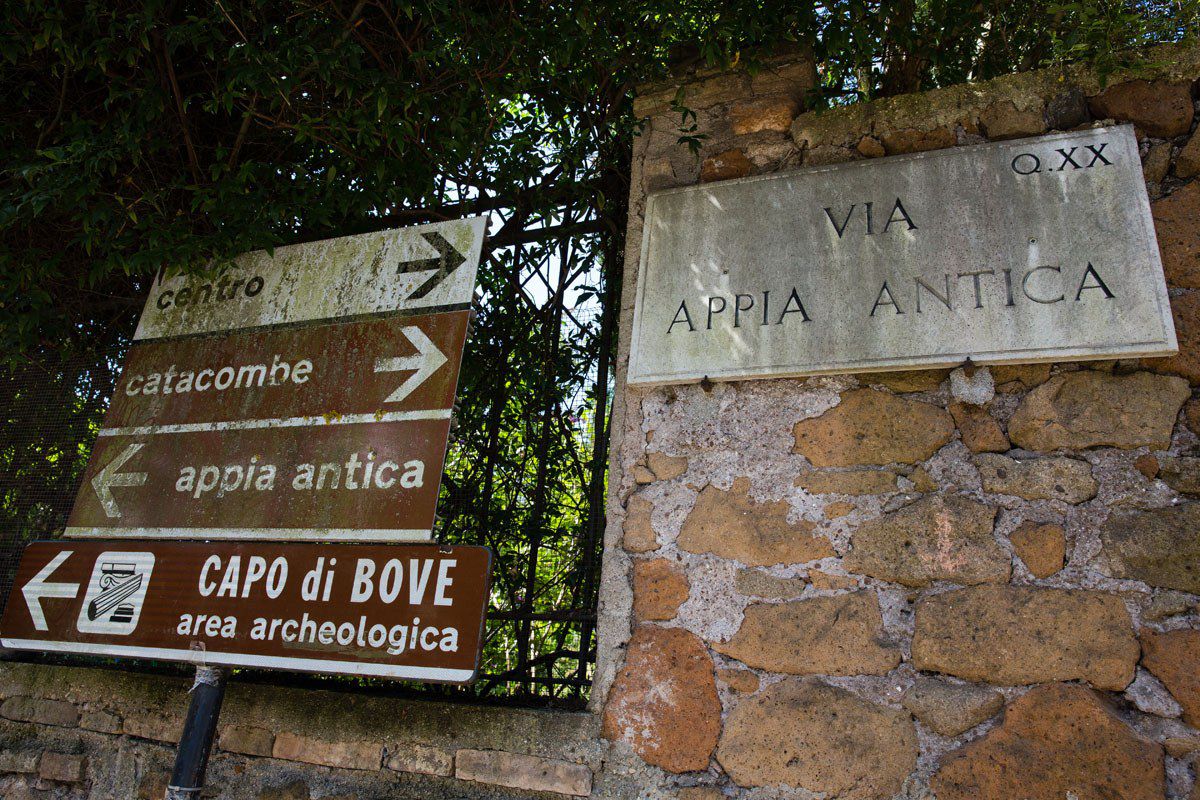 We took public transportation (a metro and bus combo) to the Appian Way, arriving near the Tomb of Cecilia Metella. How different it was here, just a short ways from the center of Rome!  It was quiet, smelled like honeysuckle, and we felt like we had the place to ourselves. I don’t know where all of the other tourists were, but we weren’t complaining. It felt great to be on our own.

On the Appian Way

The Appia Antica Café was just opening for the day. We rented bikes here, and they had smaller bikes available for Tyler and Kara. Before we knew it, our adventure began.

This turned out to be a little more difficult than I was expecting. The original sections of the Appian Way are made of large stones, which are not the flattest surface to bike on. To say the ride was bumpy would be an understatement. Tyler quickly got a handle on it but Kara had a little trouble. After a couple of falls and close calls with the stone walls along the side of the road, she got better at navigating the difficult terrain. 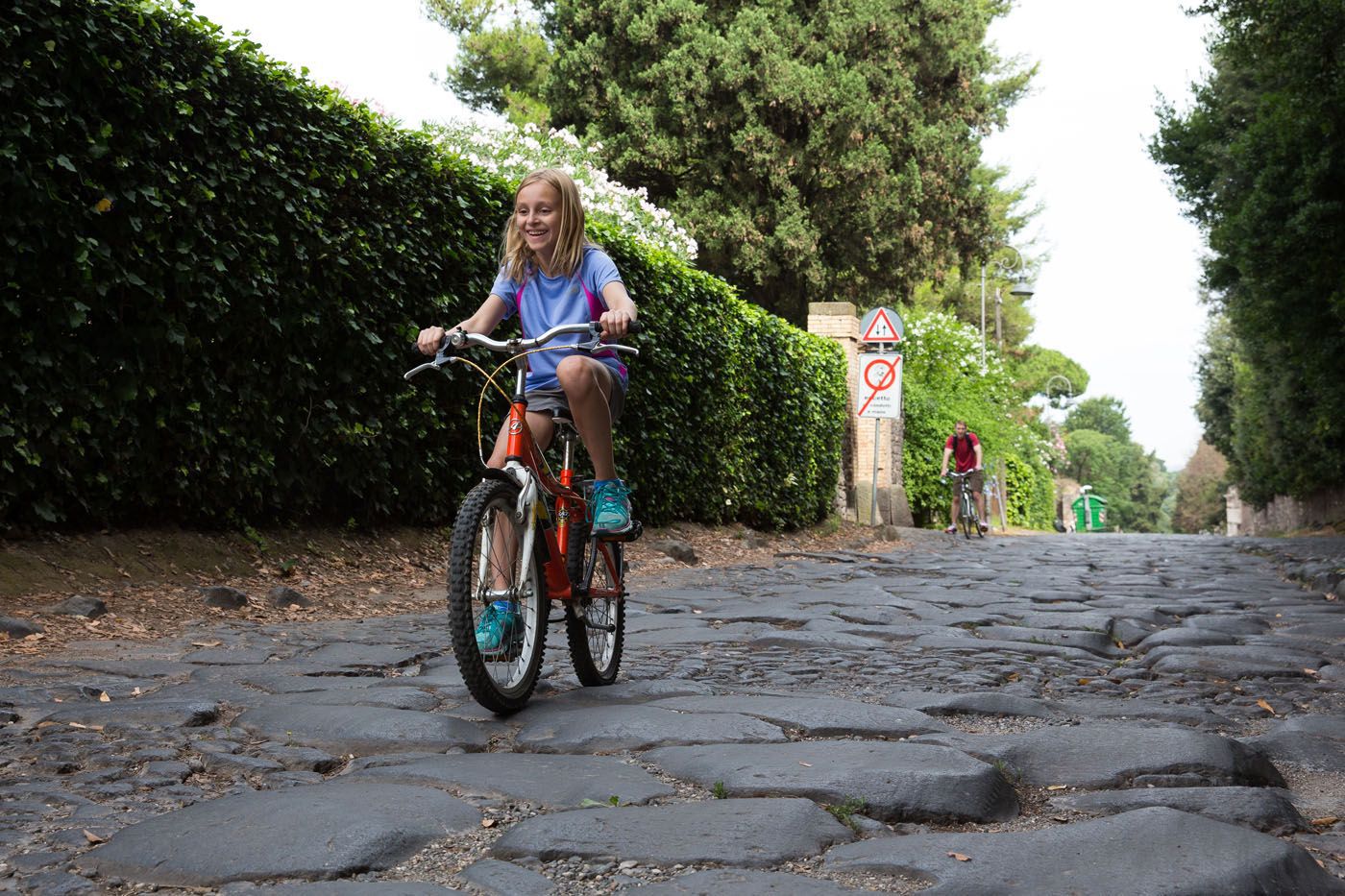 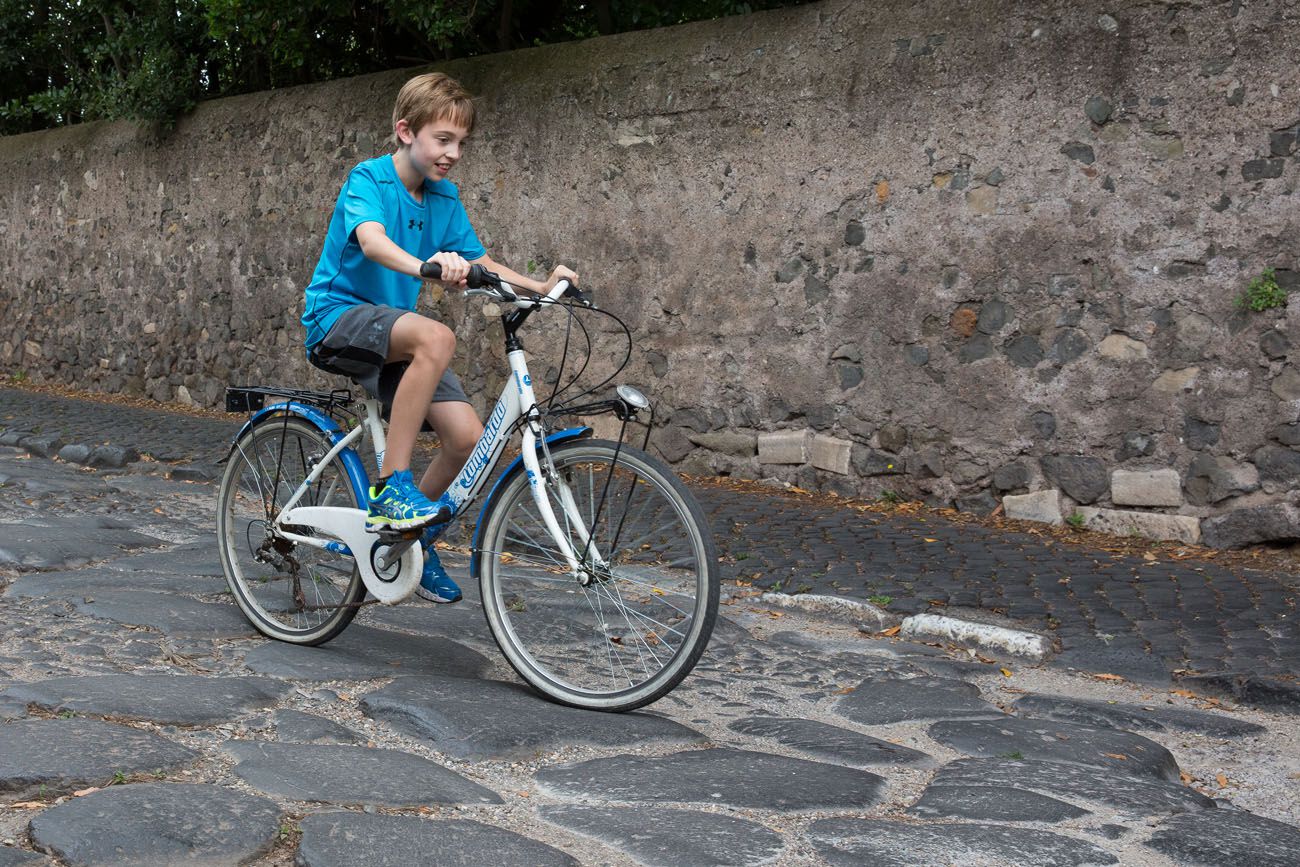 There were a lot of sections of cobblestoned road mixed in with the ancient sections of road. These were by no means smooth but did offer a break from bouncing over a road made from boulders.

Tim and Tyler had an awesome time zooming down the Appian Way. Tim, who was trying to bike as fast as possible while shooting video with our point and shoot camera, lost control of his bike, wiping out. He emerged unscathed from his accident and got very interesting video footage in the process. I am thankful for my family who always keeps things interesting while we travel. If we can manage to get through this around the world trip without any major injuries it will be a miracle.

The stretch of road available to bike upon is not very long, only about 4 miles total. We spent an hour biking this length of the Appian Way, with occasional stops for photos.

Tyler and Kara really enjoyed their time here. It was a great break from the noise, heat, and crowds of Rome. For anyone with a little extra time while visiting Rome this should definitely make the list. 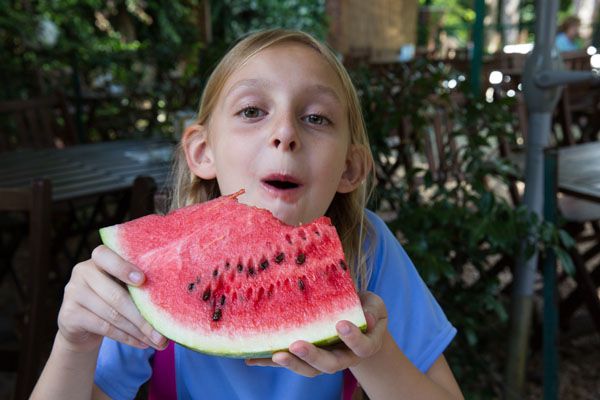 We returned safe and sound to the Appia Antica Café, returned our bikes, and enjoyed an early lunch.

Before taking a bus back to Rome we toured the San Sebastian Catacombs, which are supposed to be Rome’s best catacombs. Tim and I were expecting to go wandering through underground tunnels lined with ancient bones like the catacombs in Paris, but instead we got a 35 minute tour through underground tunnels (sans bones) and a history lesson. The history of this place is fascinating, dating back 2000 years and dealing with early Christianity, but we were hoping for something a little more morbid and creepy. We like that kind of stuff.

After our tour of the catacombs we took a relatively quick bus ride back to Rome’s city center. We have one more afternoon left in Rome until we move on to Sorrento!

Important Things to Know about the Appian Way

Getting To and From the Appian Way

To get to the Appian Way Visitor Center:  Take bus 118 from the Piramide or Circo Massimo metro stops. Take the bus away from the city center and get off at Appia Antica/Travicella for the visitor center. Stay on this bus to travel further up the Appian Way to the catacombs. Here is a list of the bus stops: Domine Quo Vadis Church, Appia Antica/Cafarella, Catacombs of San Callisto, and the Basilica San Sebastian.

To get back to Rome: you can do the above in reverse. Or, from the San Sebastian Catacombs, turn left on the Appian Way, make the first left onto Via delle Sette Chiese, walk 400 meters, and catch bus 218 to the San Giovanni metro station (line A). This is a good chance to see the Basilica di San Giovanni in Laterano, one of Rome’s most important churches.

Renting bikes on the Appian Way

The Appia Antica Café rents bikes and sells an assortment of sandwiches and fruit for lunch. They are open from 9 to sunset and their prices for bike rental are 4 € for one hour, 7 € for 2 hours, 10 € for 3 hours, and 12 € for 4 hours (prices from 2014). To bike the length of the Appian Way it took us exactly one hour, including time to stop for photos.

From the Appia Antica Cafe, you can bike in either direction. We found that the roads were less bumpy going south, away from Rome and the Catacombs.

For more information about the Appia Antica Cafe, click here.

You can also rent bikes at the visitor center for the Appian Way. 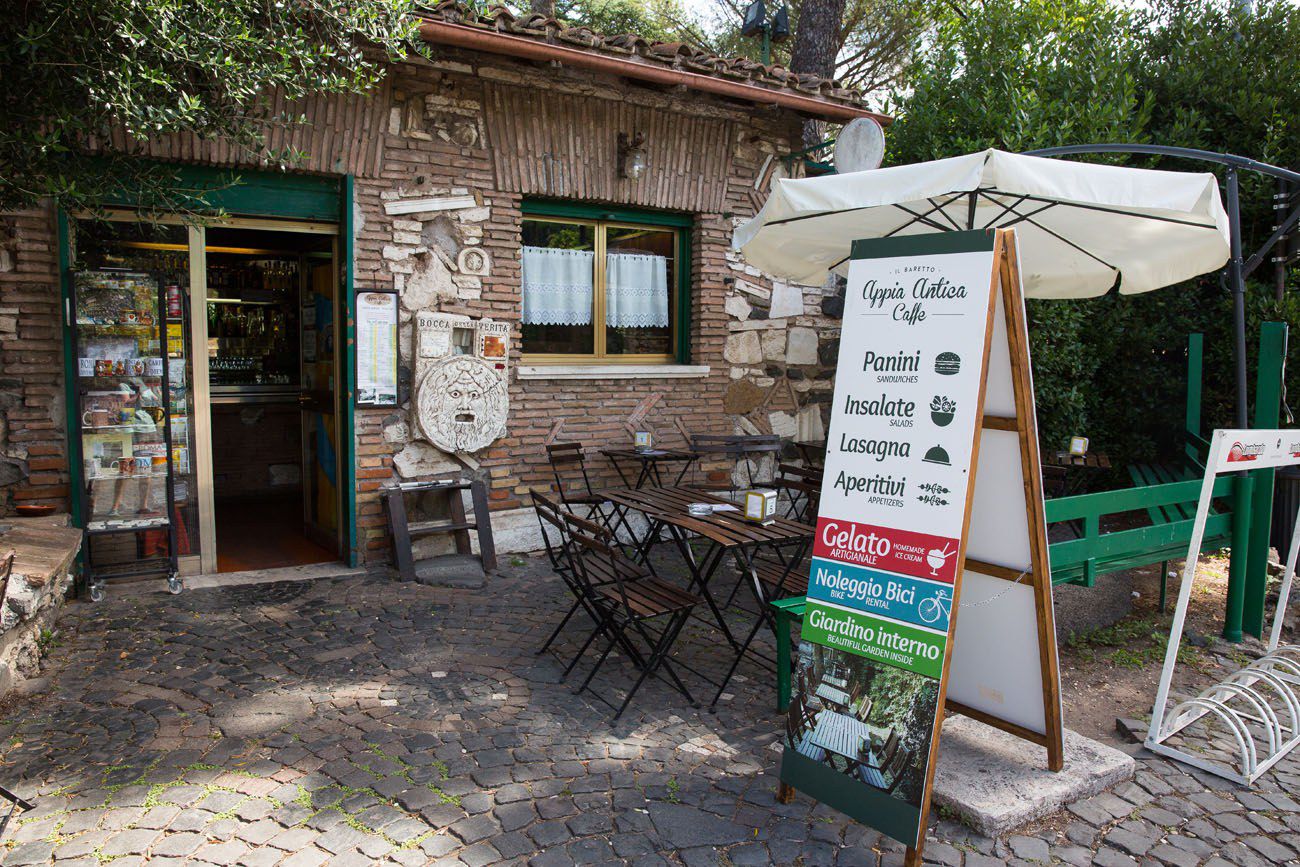 More Information for Your Trip to Italy: 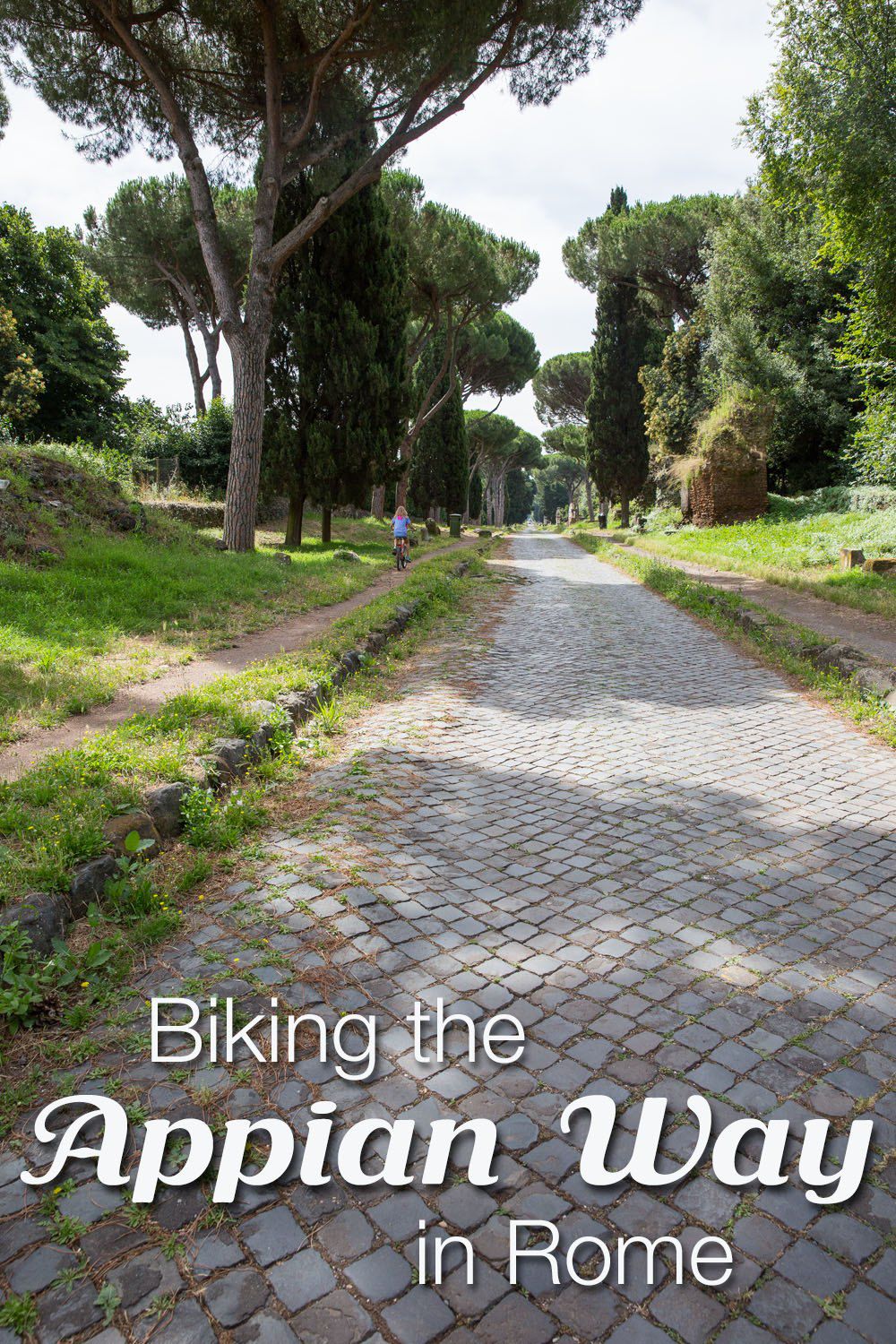