We are finally in China and so happy to be here. China has been one of our most anticipated destinations of our one year trip around the world and it has been on Kara’s must see list for a long time. So far, we have been in China for less than a week and it is everything we expected and more.

We entered China by crossing over the border from Vietnam on a very long bus trip. Our long, overland journey ended in Nanning, China and what a pleasant surprise Nanning was!

Nanning is much more modern and cleaner than we expected. It was here that we saw the tallest skyscrapers since being in Bangkok. The roads are wide, motorbikes have their own designated lanes, and bright, neon signs written in Chinese characters blanket the city.

As we drove through the city, Kara said, “I can’t stop looking out my window.” She was mesmerized by the power lines, singular power lines neatly strung along the roads identical to those in the US. Gone are the tangled cobwebs of black power lines on every street corner that we have been seeing since Nepal. It feels refreshing to leave all of that behind. 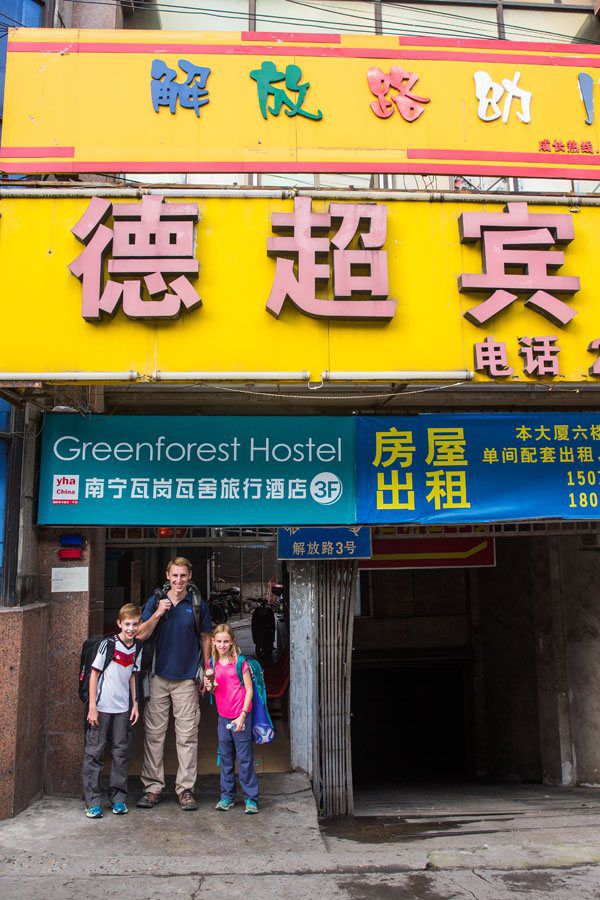 After checking into our hotel, the Green Forest Hostel, we went out into Nanning, in search of a quick dinner. As we walked through the streets we were stared at once again. It was like being in India, although the people here were friendlier and more respectful. People photographed us as we walked by and would do double or triple takes when they saw Tyler and Kara. It was like having celebrity status again. 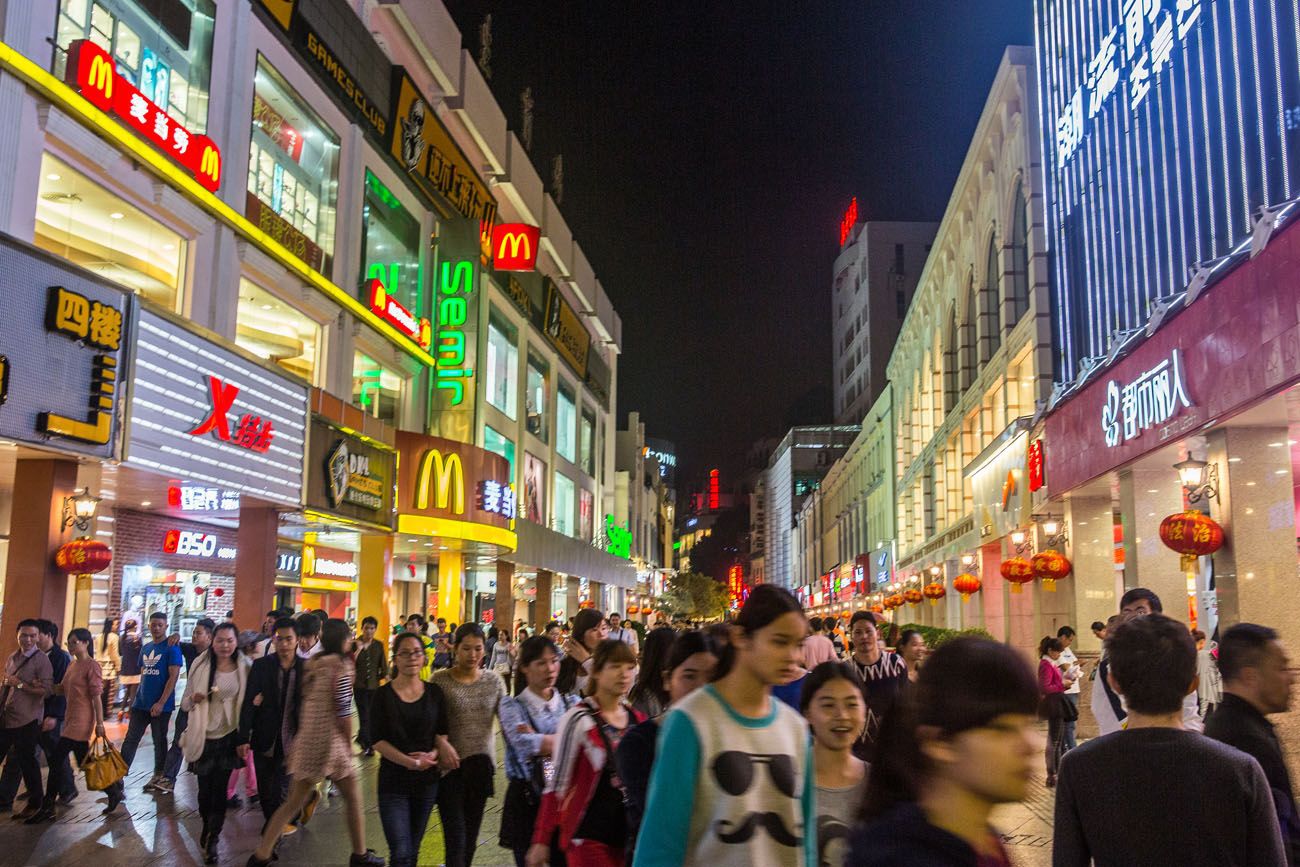 Next, we walked down a pedestrian shopping street. There was not much in the way of food here and we ended up eating at a McDonalds. Yes, I was not thrilled to have my first meal in China at McDonald’s, but we chose the safe, easy option. It was 9 pm and we were not feeling prepared to order Chinese food for a child with a peanut allergy in a place where there was a significant language barrier.

It was in McDonalds that Tyler got to use his Mandarin for the first time. Tyler ordered our drinks without ice and the lady taking our order understood him completely. Tyler was so proud of himself.  What an awesome experience this is going to be for Tyler…traveling through China and speaking Mandarin. 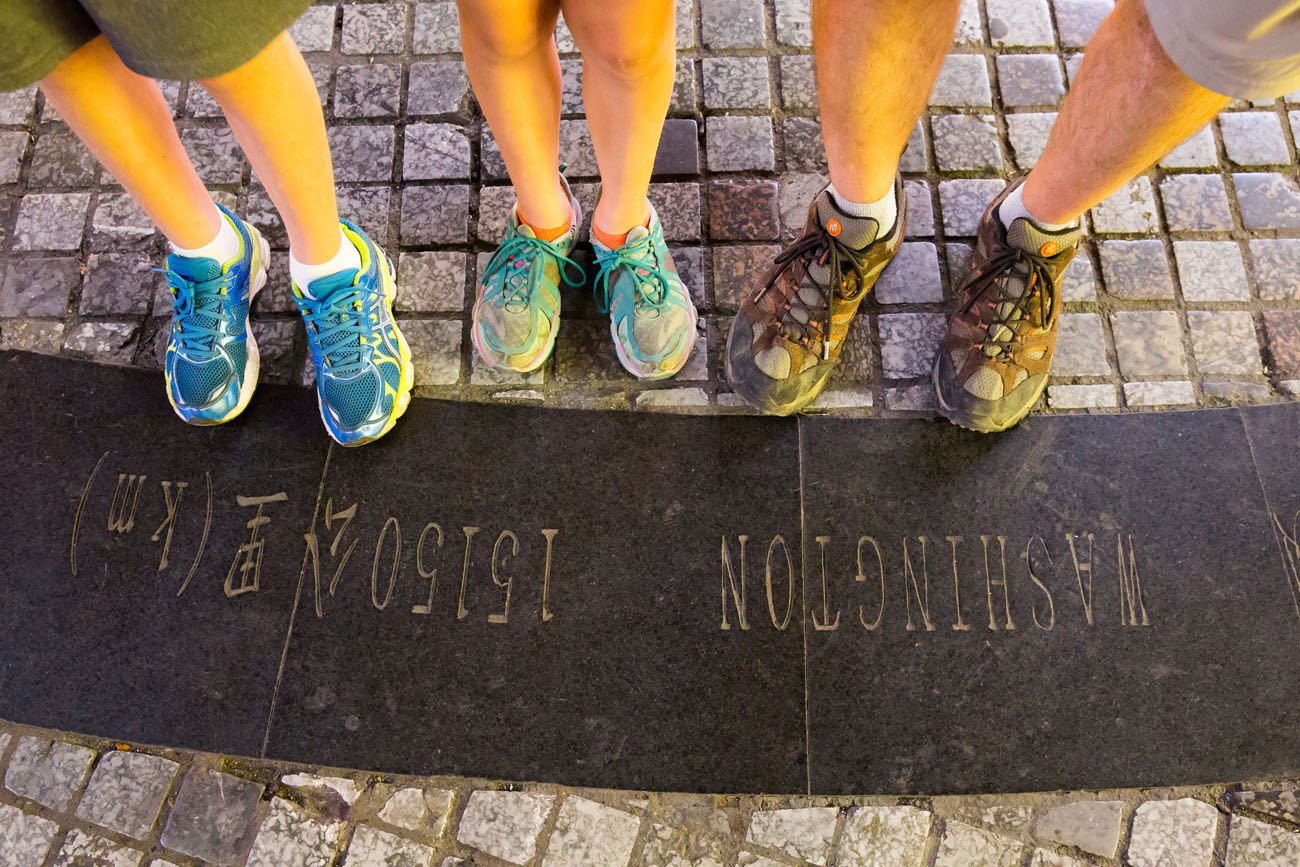 At the Train Station

On our second day in China we took our first high speed train, traveling from Nanning to Guilin.

To enter the station we had to pass through multiple security checks similar to passing through security at an airport. Next, we immediately headed to the large, electronic board listing all of the train departures. Everything but the train numbers were in Chinese. A worker saw our look of befuddlement and came over to help. She directed us upstairs to the waiting area for our train, where we proceeded to wait for our train. As we stood in the waiting room, many people were staring at us and some were taking our photos. One family came up to us a struck up a conversation with us. Everyone here is so friendly, I love it! 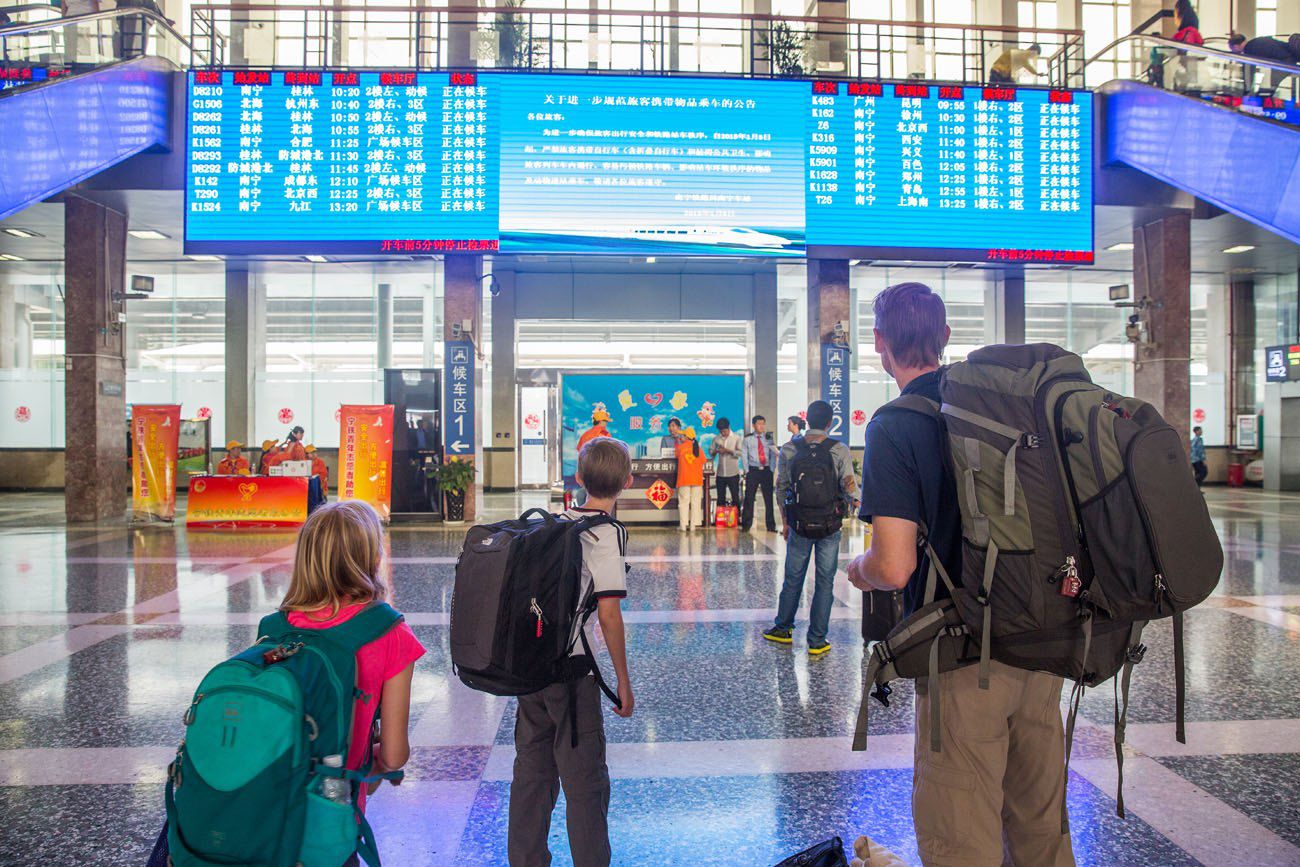 At 10:00 am we were allowed to board the train. The four Earth Trekkers and a huge crowd of Chinese people walked through a long, clean, modern corridor and then out to the train platform. We were carrying our backpacks, other people were pulling luggage or carrying cardboards boxes.

We easily found our seats, stowed our things in the overhead shelves, and got comfy. We traveled in a 2nd class car, similar to economy class on an airplane.

I stepped off the train to take a few photos. This train looked so cool:  aerodynamic, clean, and futuristic. We are loving China! 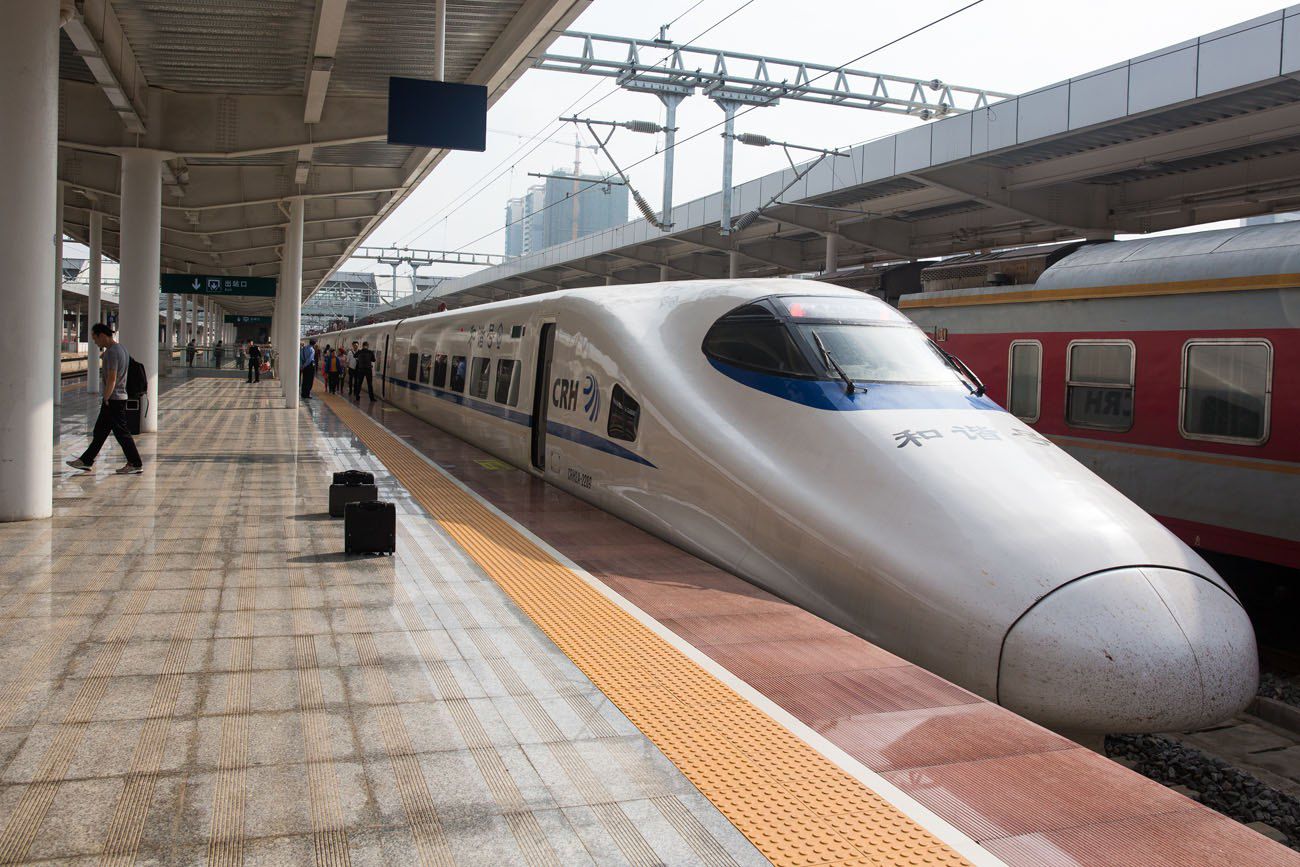 Then, boarding the train, I witnessed a series of events that reminded me that China is still very different from home.  Right by the entrance to our car was a man with a finger over one nostril, blowing his nose right onto the pavement. As I passed by him he had a long string of mucus dangling from his nose.

Once on the train, an overweight man without a shirt was walking back and forth, up and down the aisle. Then, I edged my way around a young, arguing Chinese couple. The woman was screaming at her husband and he looked very frustrated. I have no idea what she was saying but all I could figure is that the husband was not putting their belongings on the shelf as well as she wanted him to.

The trip from Nanning to Guilin took two hours. At the halfway point, in Liuzhou, some passengers got off and were replaced by new ones. For the second half of our journey I sat next to a Chinese college student who spoke English fairly well. We chatted back and forth, me using basic Mandarin and she got a chance to practice her English. Away from the big cities of China, English is rarely spoken, so to come across someone who could speak English as well as she did was a huge bonus.

Tyler and I have been learning Mandarin using a computer program called Fluenz. Fluenz is a company that I am a huge fan of, having used them to learn Spanish and French. I showed my new friend the Fluenz lesson I was working on. As I went through the lesson she liked seeing how the English was written while I practiced my Mandarin. It was a very cool experience, connecting with someone while getting a chance to practice each other’s native language. She thought it was so neat that she was taking photos and texting them to her friends.

Once in Guilin, we traveled by car to the town of Yangshuo, and there begins our next adventure.

Are you planning a trip to China? Read all of our articles about China in our China Travel Guide.