Taking the Bus from Hanoi to Nanning 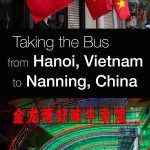 To enter China from Vietnam, we chose to travel overland by taking the bus from Hanoi to Nanning. By traveling overland we saved the huge expense of airplane travel and we got to see parts of Vietnam and China that many travelers miss.

Taking the Bus from Hanoi to Nanning

Hanoi to the Border

There are two buses that take passengers from Hanoi to Nanning, leaving at 7:30 am and 9:30 am. We chose the 9:30 bus so we would not be rushed in the morning. We booked our tickets through our hotel, the Hanoi Old Centre Hotel, two weeks prior to the trip. A ticket costs $35 per person for the entire journey from Hanoi to Nanning (as of 2015).

Note: This post is updated on a regular basis. However, we did this trip in 2015. 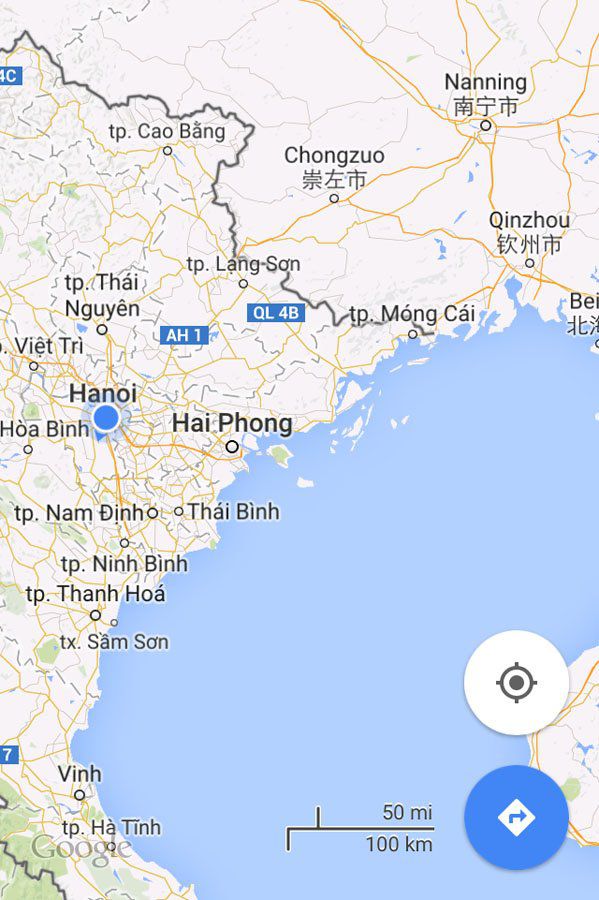 A taxi dropped us off at the “bus station” in Hanoi. We were dropped off on a wide city street near the entrance to an upscale hotel. With help of hotel staff we realized that our bus was parked across the street. This would be the place where we would say goodbye to English. Almost everyone here spoke Vietnamese or Mandarin, making this the first time on our one year trip where communication would be difficult.

There were no assigned seats on the bus and even though we arrived a half an hour early, most seats were already taken. The four of us worked our way to the back of  the bus, finding four vacant seats almost in the very back. Gradually the bus filled with people until every seat was taken. We left right on time at 9:30. 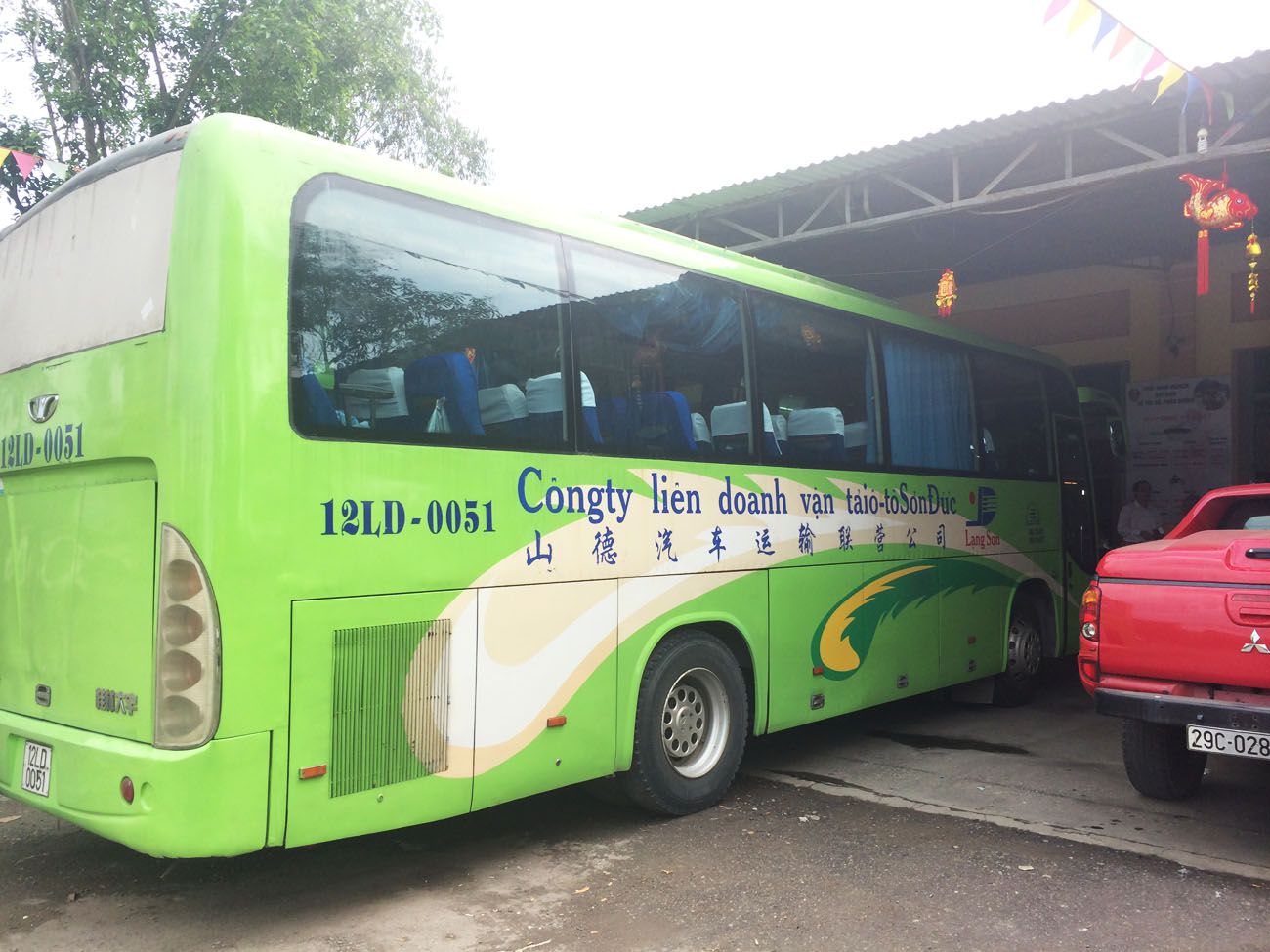 As soon as we were moving, the air conditioner vents began leaking water at a few places on the bus. Water was dripping down on the heads of several passengers, but fortunately we had chosen seats that remained dry. The bus attendant took our curtains and those from the row in front of us, covering the vents with them and taping them in place. Nice! This fix really didn’t work.  Once the curtains were saturated the dripping would begin again. 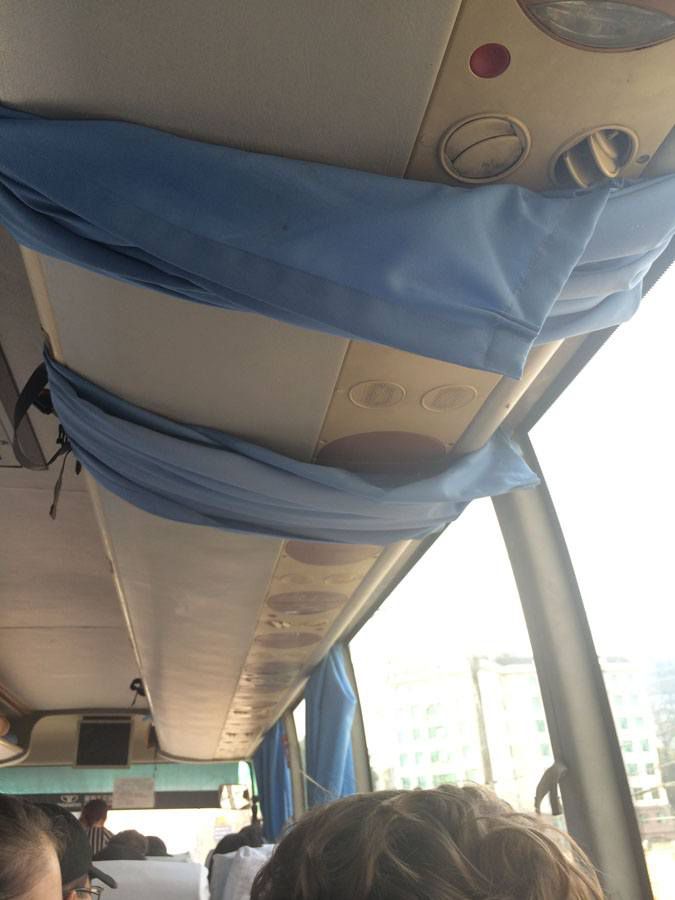 At the halfway point to the border we took a half hour break at a rest stop. For sale was warm bottled beer sitting out on tables, fresh fruit, and an assortment of packaged Vietnamese foods. We stuck with our snack foods we purchased yesterday.

At 1:30, after exactly four hours on the bus, we arrived at Lang Son, the Vietnamese border town. I know the people in the wet seats were happy to get off. We were done with this bus for the day and a second bus would take us from the border to Nanning.

Everyone gathered up their luggage and were handed badges on lanyards. These badges helped border personnel know where to direct us next and which bus to take once crossing over into China. Then we were directed to shuttles that drove us the short distance to Vietnamese border control. These shuttles are green, electric powered carts holding up to 15 people and their luggage. Being on these reminded me of being transported from the parking lot to the entrance of Disney World. 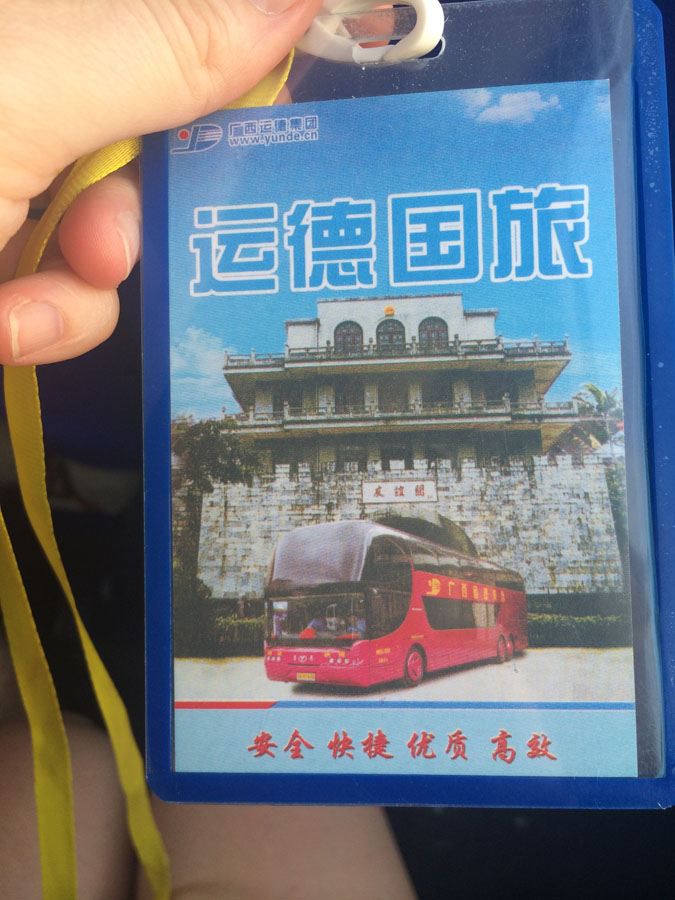 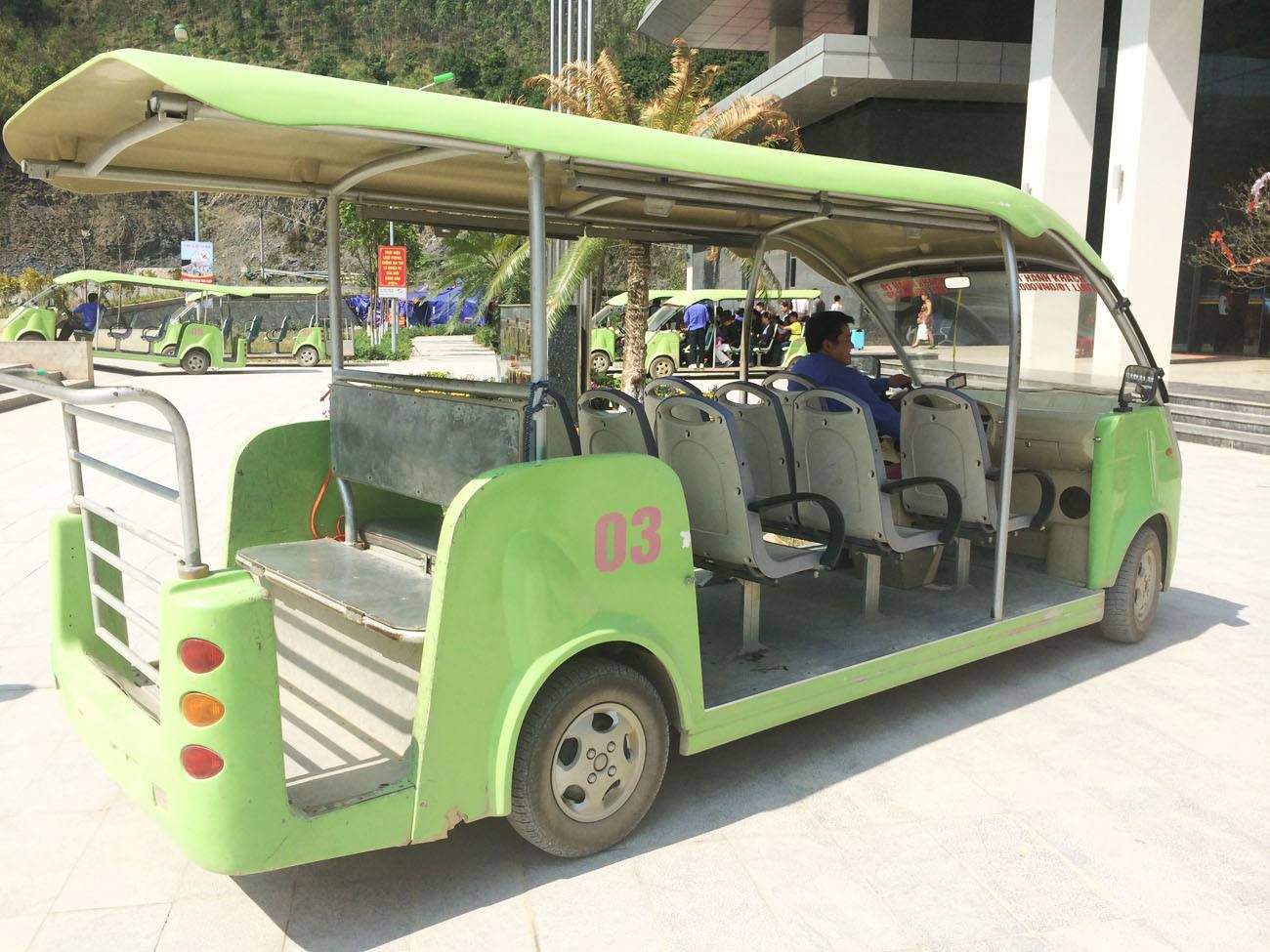 We entered a large, air conditioned building and waited in line to be stamped out of Vietnam. This process was slow and the line slowly inched forward. One security guard saw that we were waiting with children and bumped us up to the front of the line. Traveling with kids has its perks! All four of us were stamped out of Vietnam, and even with leap frogging the line this still took forty-five minutes.

From the Vietnamese building we boarded another oversized golf cart with our backpacks and crossed the border into China. China!! Hooray! We were stopped by a security guard who looked very official and even a little intimidating in his camouflage uniform, and he checked over our passports. He proceeded to speak to us in Chinese and Tyler and I were barely catching any of it. The people behind us translated for us, which was nice. They were very friendly and loved seeing how excited we were to be in China.

The cart dropped us off at the Chinese border post. We filled out arrival cards, which are available upon entering the building, and quickly cleared immigrations. This process was easy and efficient, only taking us twenty minutes.

From the Border to Nanning

We boarded our last golf cart to the bus station. From here we boarded our second bus of the day and this one looked no better than the first. It was old and dirty but at least the air conditioner did not leak water onto the passengers. At 3:30 pm, two hours after arriving the border, we were on our way. 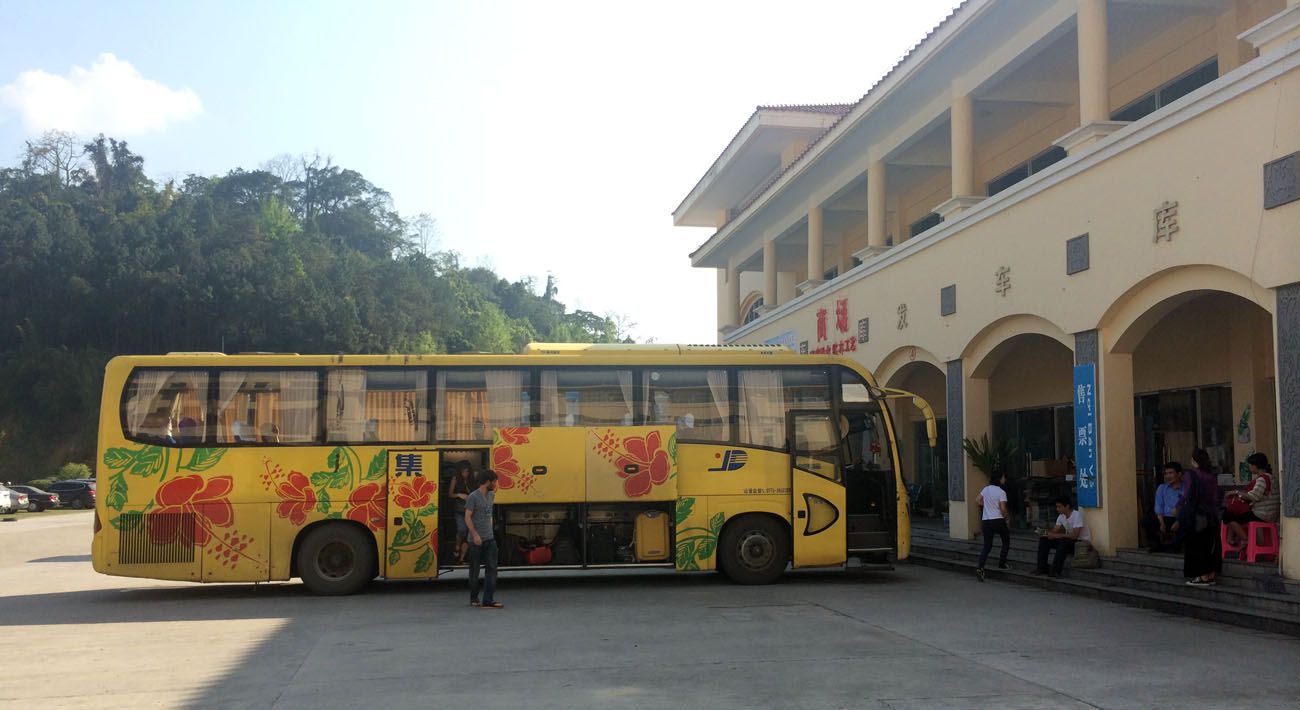 The distance we traveled from the border to Nanning was farther than the distance traveled in Vietnam but would go much faster. In China, we were back on wide highways, nice smooth roads with no motorbikes, cows, or people in the way. The bus ride was smooth, not lurching from side to side to pass obstacles, not slamming on the brakes to avoid hitting a goat in the road. It was so nice. Tim and I almost felt like we were home, with the wide highways, large, green street signs, power lines neatly strung along the road on tall, metal poles, and trees along the roadside.

At 6 pm Hanoi time, 7 pm Nanning time (China is one hour ahead of Vietnam) we arrived in Nanning. Nanning is a much larger city than I was expecting and is also very modern, a pleasant surprise. What a nice welcome to China.

We were dropped off at the Langdong Bus Station. Another wonderful change since entering China:  there was not one single taxi or tuk tuk driver hounding us to use their service. Thank goodness! Everyone grabbed their bags and scattered from the bus station. In just two minutes we were standing in the dark on our own. Once we walked out onto the city streets there was no problem finding that taxi that we needed, and in no time at all we were checking into our next hotel. 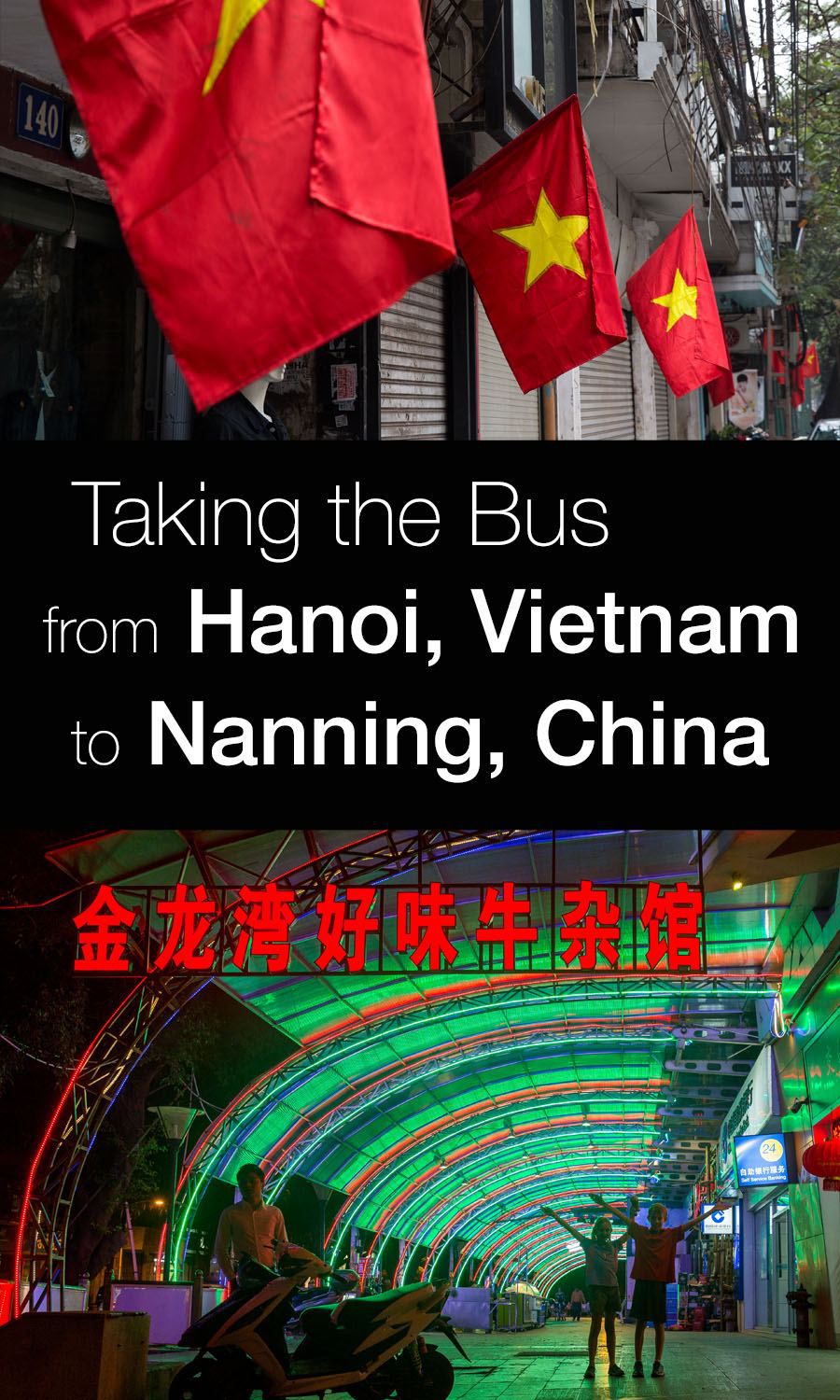