Not Your Typical Market Tour in Zhangjiajie, China 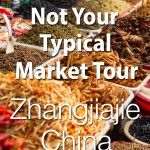 The city of Zhangjiajie was not what Tim and I were expecting. For some reason, we pictured Zhangjiajie to be a quaint, scenic town, with small shops and restaurants, nestled at the foot of some of the world’s most unique scenery. We arrived by train, and instead of a small town we entered a large city, complete with numerous high rise buildings, lots of taxis and people, and wide city streets. Zhangjiajie is no small town, it is a small city! Surprise number one!

It was March 3rd when we arrived in Zhangjiajie, Tyler’s twelfth birthday. It wouldn’t be until the next day that we would actually make it into the park to see Zhangjiajie’s big draw, the landscape that served as the inspiration for the planet Pandora in the movie “Avatar.” Zhangjiajie may be a place you have never heard of but probably have seen from watching this very popular movie.

We did not get the pronunciation of Zhangjiajie correct until arriving here. We mispronounced it every way possible.  The correct pronunciation is jong-jya-jyey, said really fast, just in case you were wondering.

Since we could not get to the park on Tyler’s birthday, we found other adventures in town to keep the day interesting. Not really seeking it out, and not even knowing that it existed, we stumbled upon another outdoor market. We have been to countless markets and thought that we had seen it all, at least until this one.

This is not for the faint of heart. We witnessed what many people might think are disturbing sights, but Tim and I were fascinated. 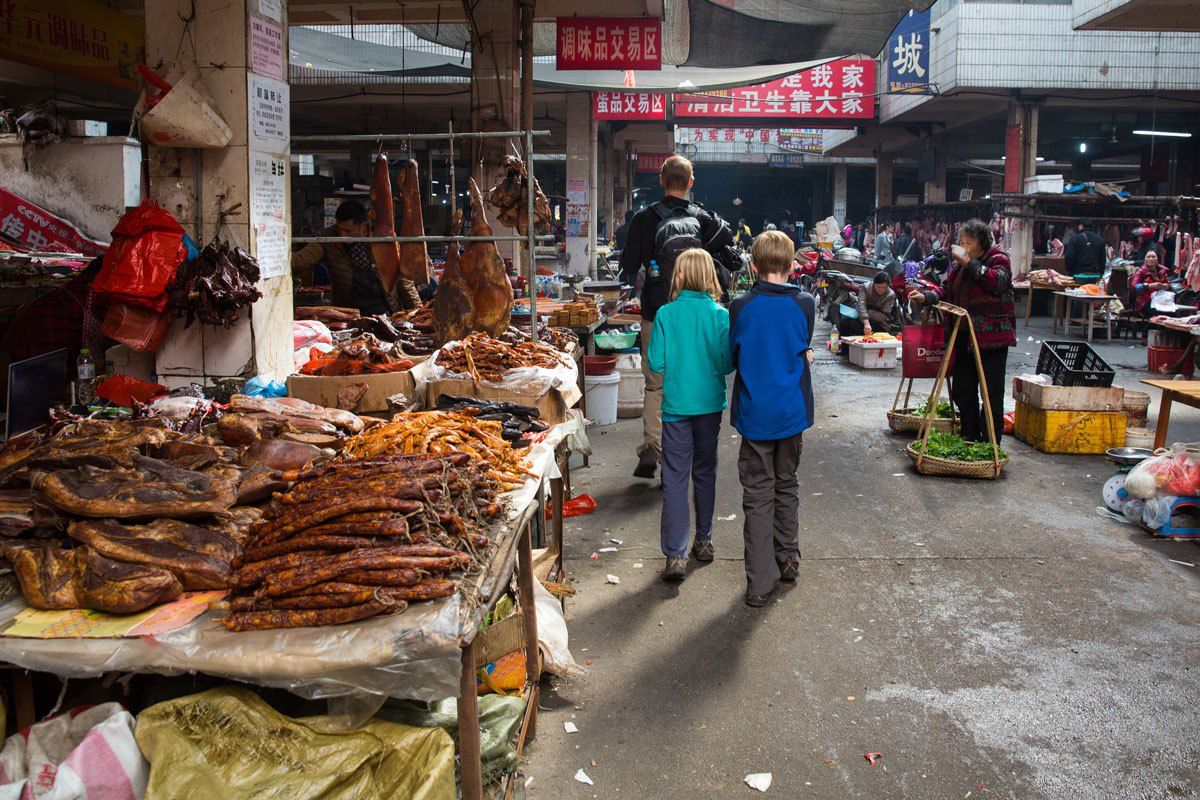 At first, it started off easy.  We walked past all of the typical foods…vegetables, dried mushrooms and herbs, and even the meat hanging on metal hooks does not phase us very much anymore. 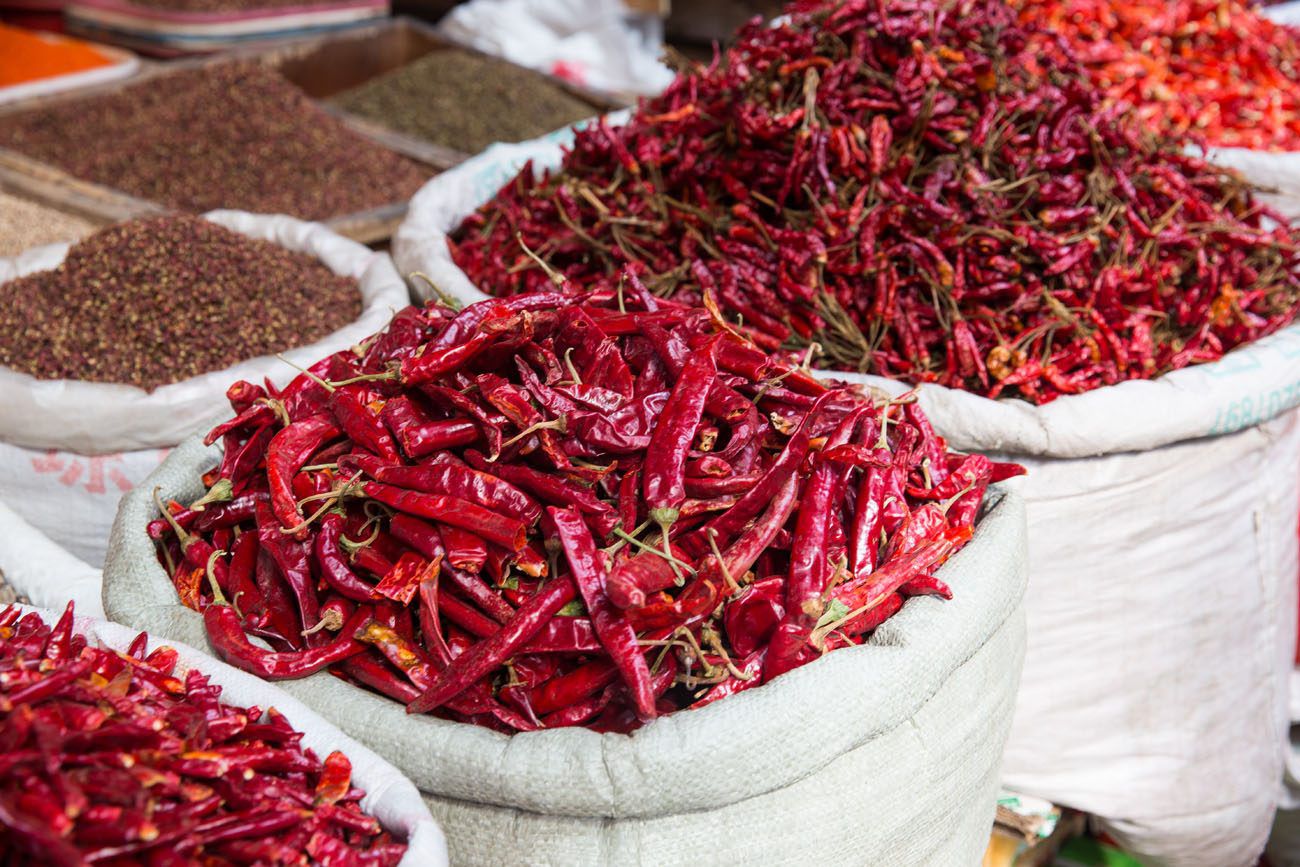 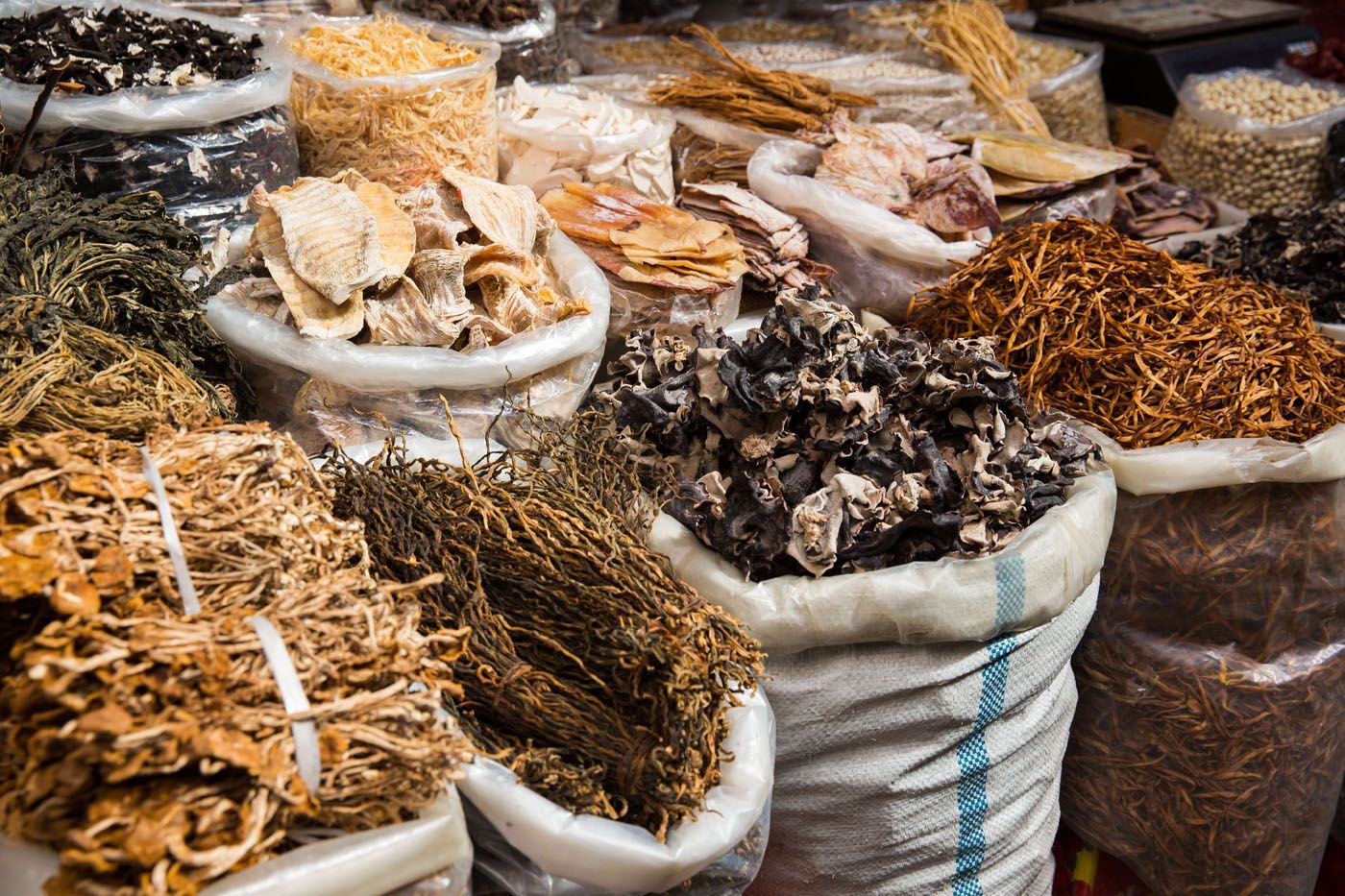 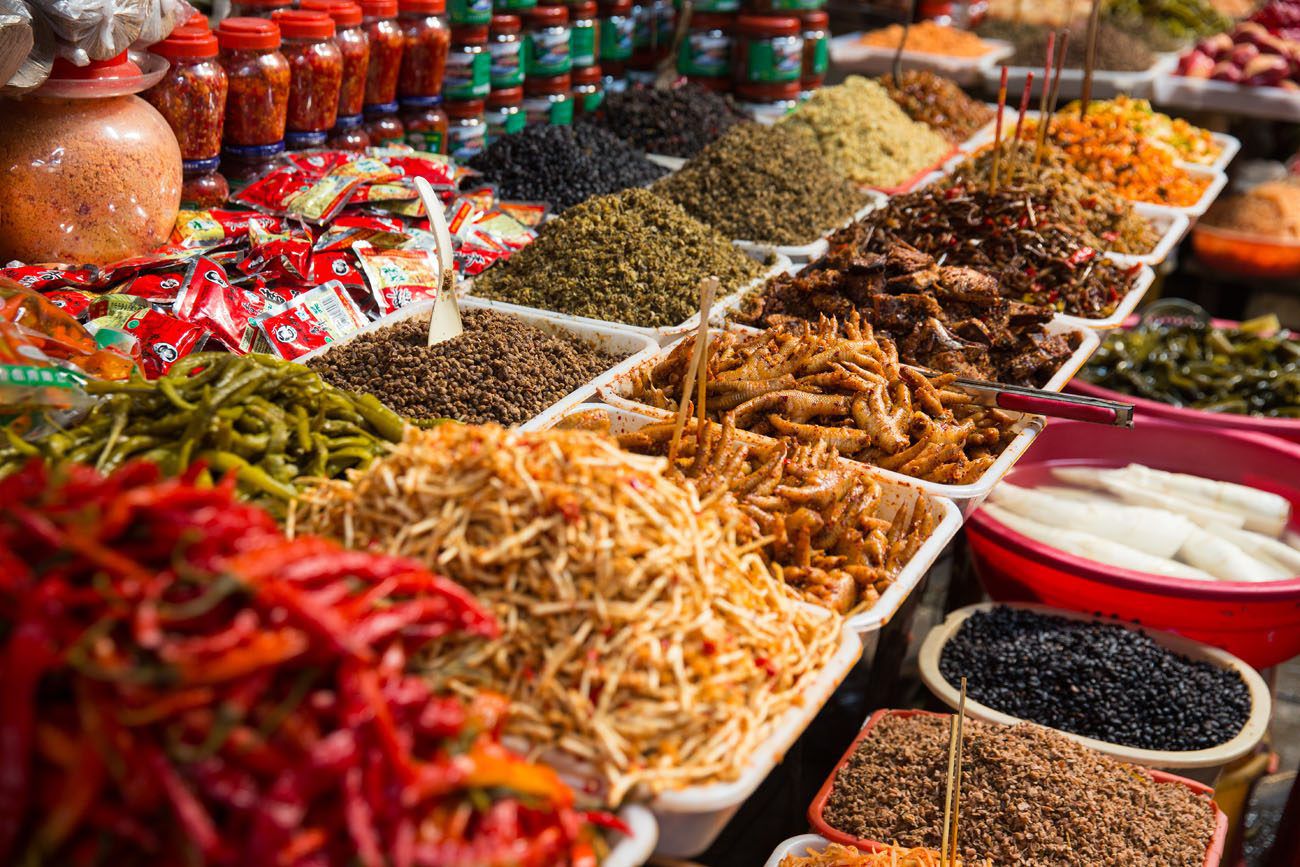 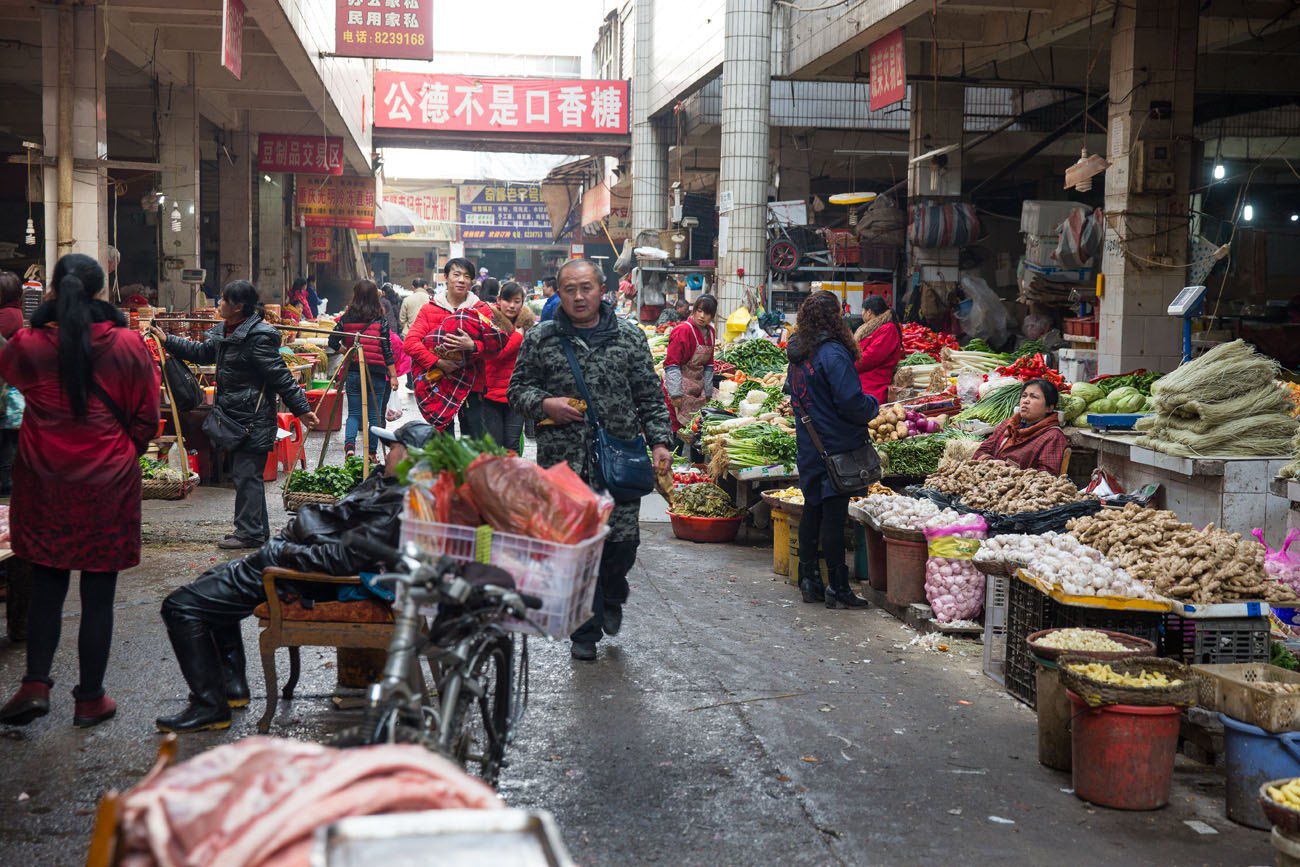 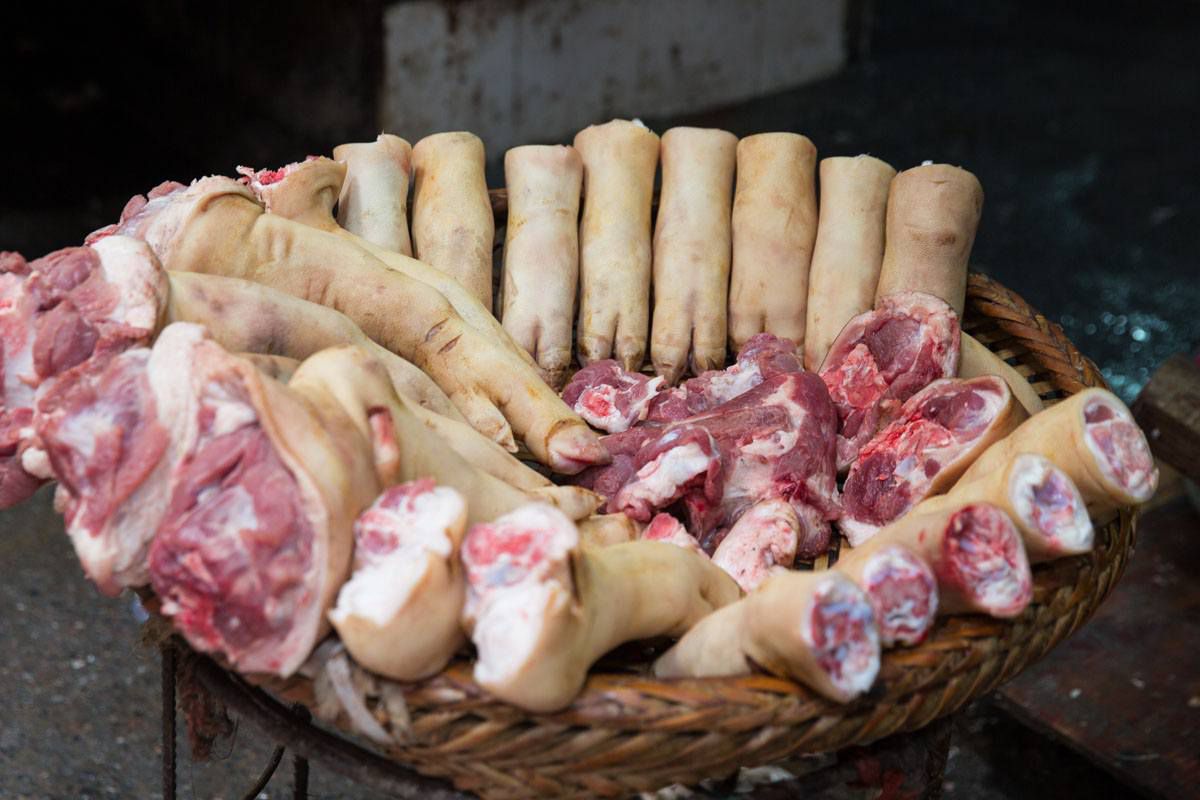 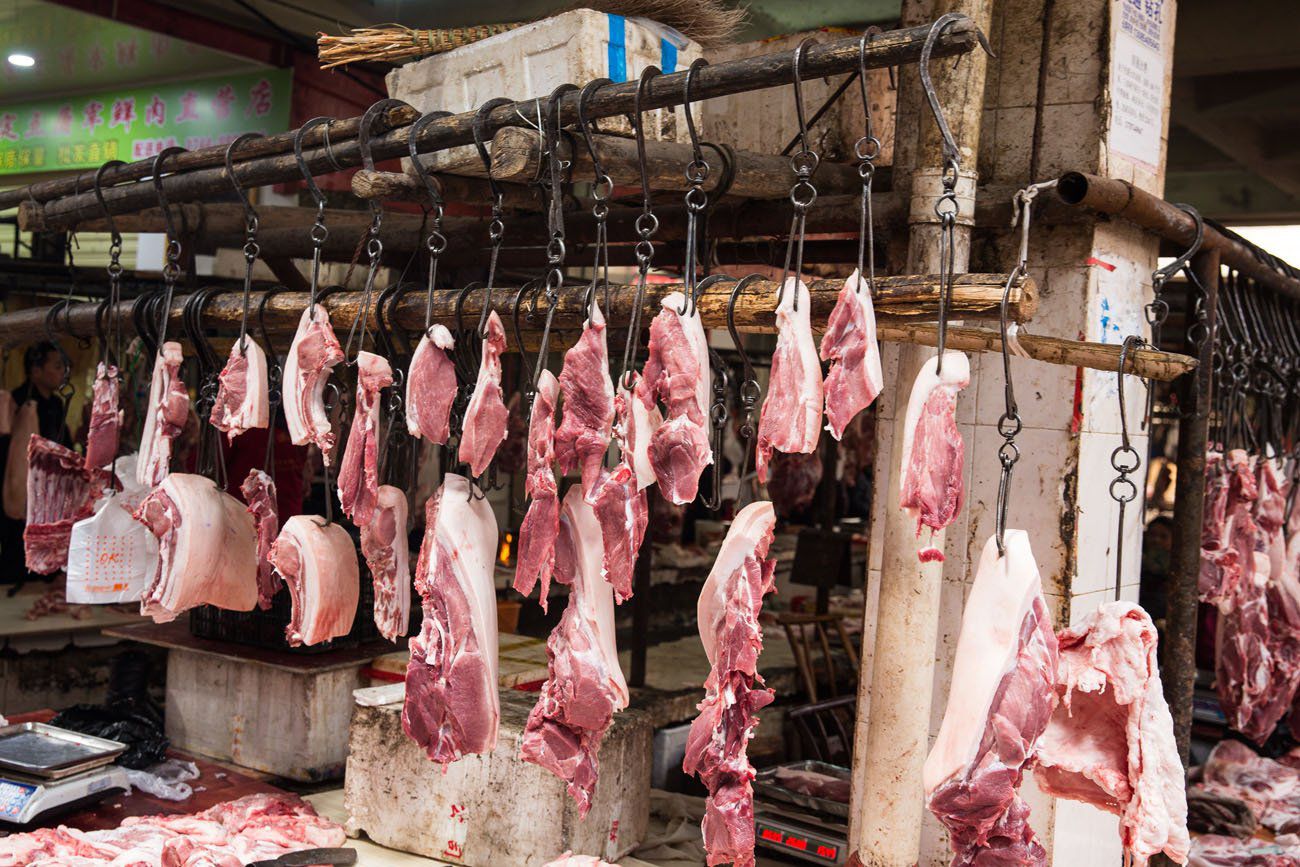 Things got a lot more interesting once we approached a man who had just skinned and gutted a small deer. The deer was dangling upside down by its feet, hollowed out on the inside, a puddle of blood underneath it.

Very nonchalantly, with a cigarette hanging from the corner of his mouth, the man proceeded to skin another deer, starting with the face. Kara watched with a look of disgust on her face and Tim asked if this was too much for her. Kara answered, “no.” This same man had at least 30 carcasses of deer and other animals dangling from hooks, already skinned and gutted. 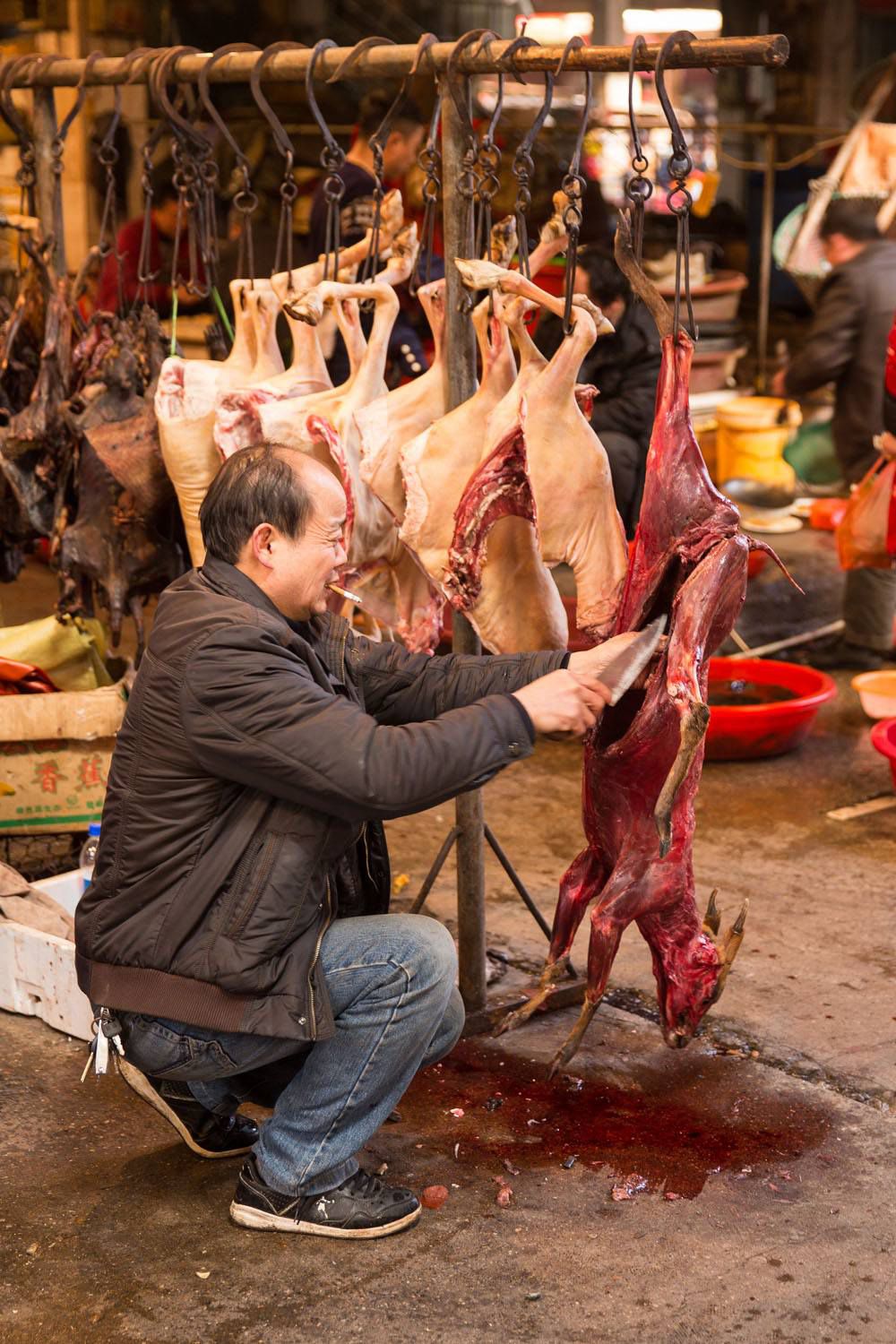 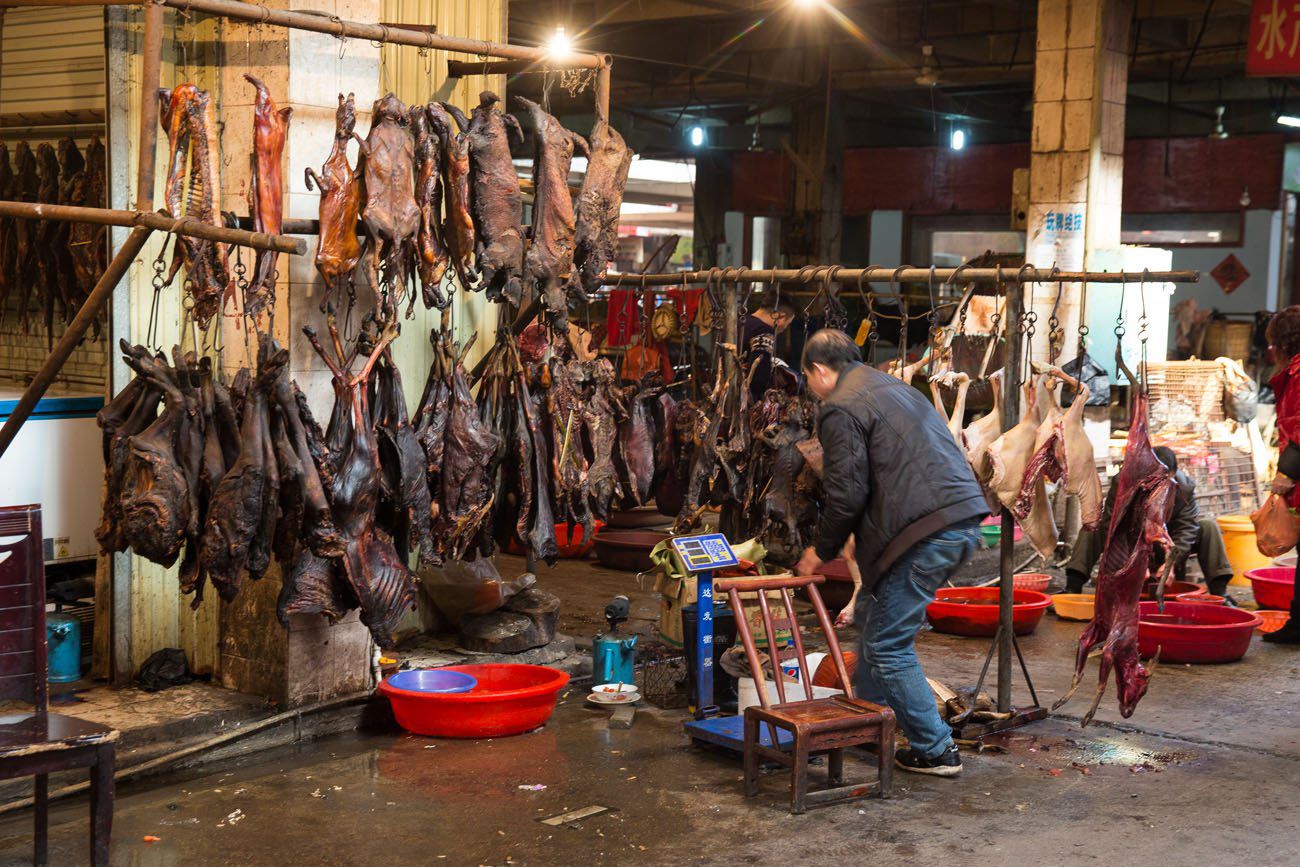 Not five feet away were men skinning what looked to be water snakes. The man would pick up a live snake and whack it against the wooden plank he was sitting on, stunning it. If it wasn’t dead yet it soon would be. He laid the snake on the board and drove a nail into its head to hold it in place. Then, with a knife, the snake would be filleted open, the insides removed, and the skin cut into small pieces and placed into a bowl, now for sale. The board and the man’s hands were covered with blood. These guys were getting a lot of business for these small pieces of skin, too. I don’t have any photos but stay tuned for Tyler’s video for today; I am sure it will be a highlight!

Tim had us wander farther back into the market. The ground was slippery with blood and guts and the smell was slightly unpleasant, but not as bad as one might expect with all of this butchering going on around us. We approached a rack filled with hanging, gutted, and charred animal carcasses. None were very big and I could not tell what they were. 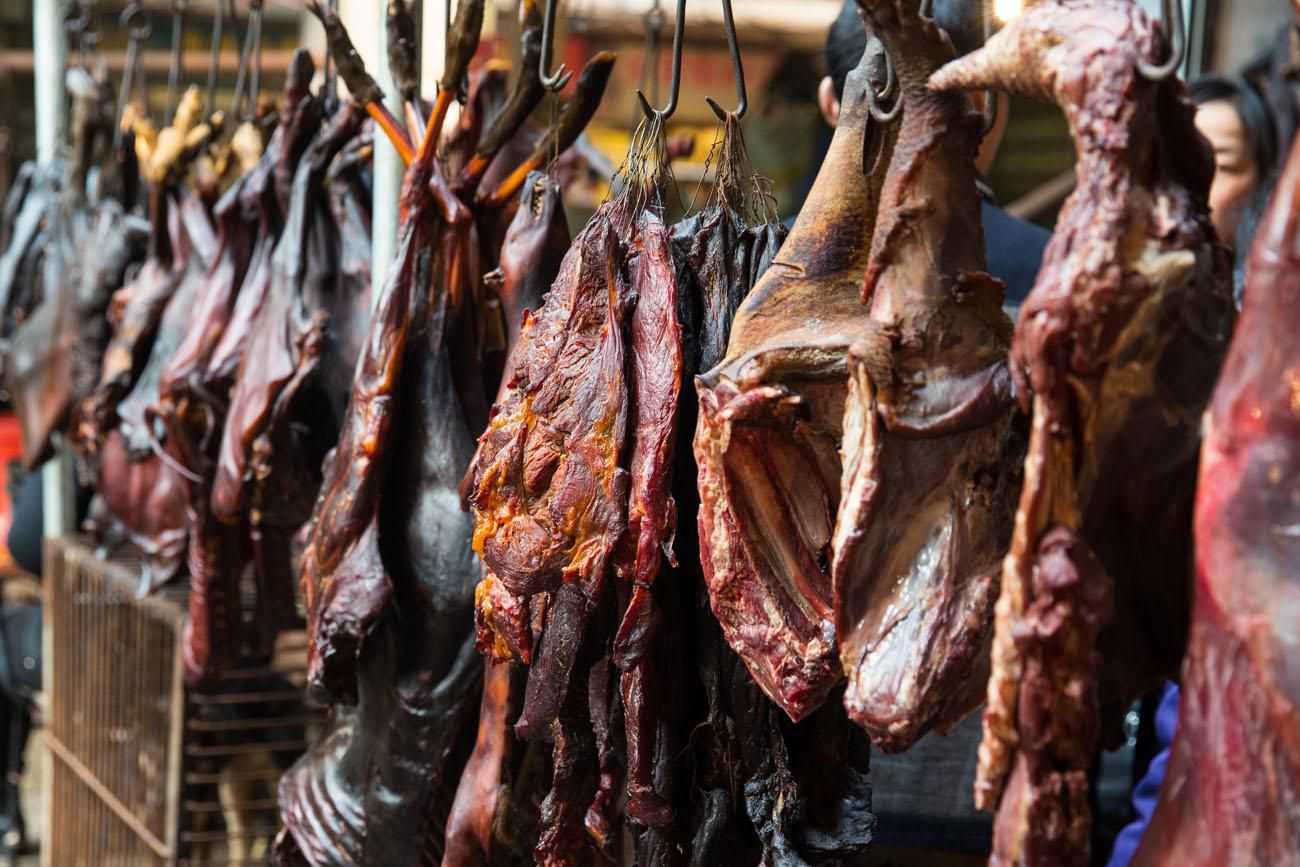 To our left was a man cooking pig’s feet, blowtorch style. Again, with a cigarette dangling from his mouth, he had a blowtorch in one hand and a pig’s foot in the other. With a hot, blue, intense flame he was turning the pale pig’s foot into a black, charred stump. He was wearing nice clothes and shoes but sitting in a filthy place doing this. He looked up at us and smiled.

Meanwhile, a group of women in the very back of the market, sitting on stools among more animal carcasses, could not take their eyes off of us. 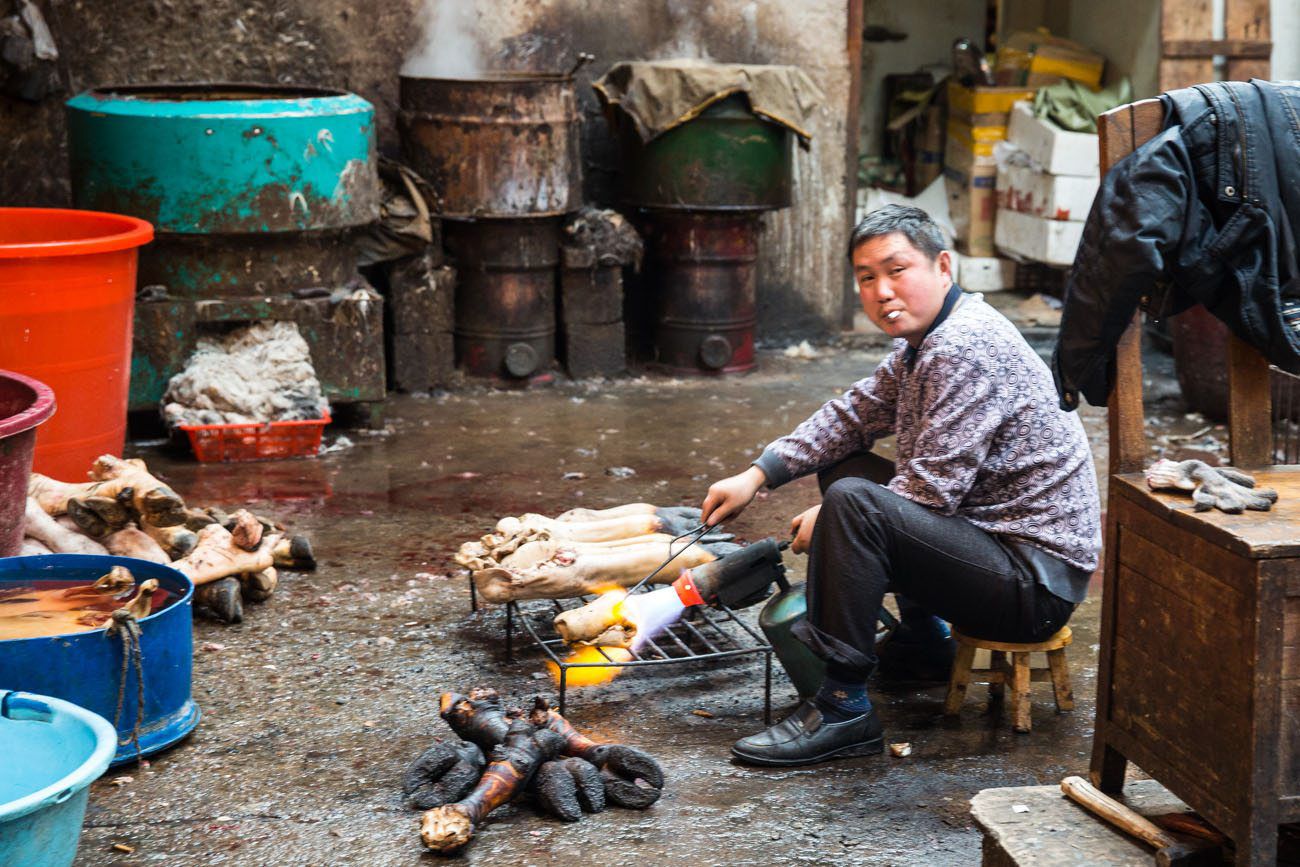 So, what did Tyler and Kara think of all of this? Kara was indifferent and both of them were not phased by it very much. They have been to enough markets by now and seen enough crazy things that even this was not upsetting to them.

Tyler really wished that we were doing something different on his birthday, although this will be a birthday that he will never forget! You just can’t get these experiences at home!

Nearby there were less disgusting sections to this market…more fruit, toys, cookies, and baby supplies. All very mundane and boring, although the cookies were good and dirt cheap. 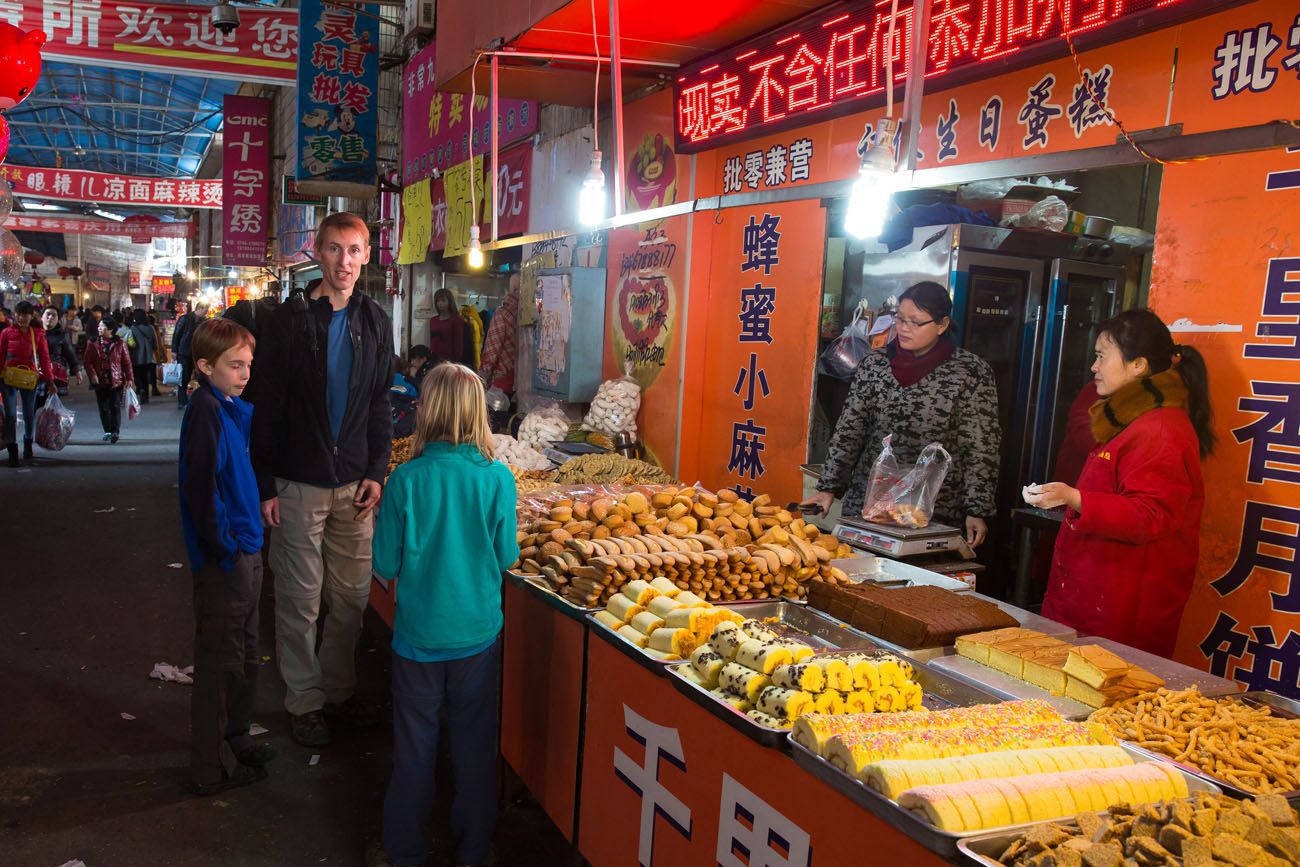 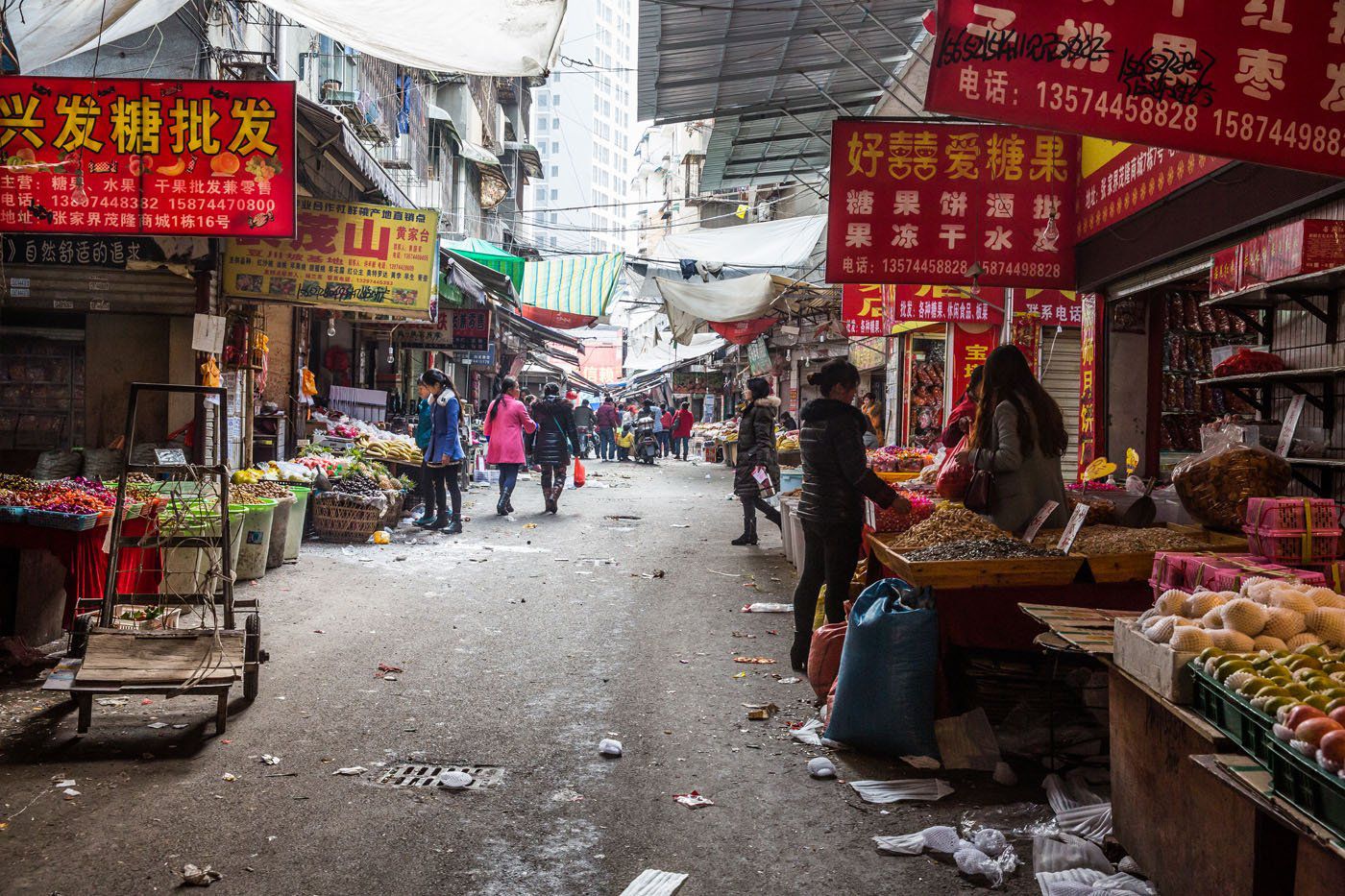 Our Experience in Zhangjiajie

The market was not our only surprise in Zhangjiajie. We knew we were going off the beaten track by coming here but had no idea that we would be the only western tourists we would see. Everyone was Chinese and everyone spoke Mandarin. To find a person who spoke a little bit of English was a rarity. Even our hotel staff spoke only a few words of English. This is exactly why Tyler and I studied Mandarin before coming to China, knowing that we would be going to places where even knowing the basics would be invaluable.

We got tons of attention here. People would point to us, smile and wave to us, sometimes they would even stop what they were doing to watch us walk by. Never have we received the amount of attention that we had here in Zhangjiajie. The younger people loved to say “hello” to us and then “nice to meet you.” Everyone was so friendly and it was such a neat experience. I had no idea that we would receive this much attention in China.

Our last surprise in Zhangjiajie came in the form of a giant celebration. Thursday, March 5 was the Chinese Lantern Festival, a celebration on the first full moon of the lunar new year. Throughout the day the streets began filling with people. Balloons were for sale, vendors were selling masks on the sidewalks, and the city felt very festive. At 8 pm, Tim and I went down to the main road just for a peek, not expecting to see the streets completely packed with people. A stage had been set up and a band was playing rock music.

Tim and I joined the crowds, walking through the streets with everyone else. Once again, people loved saying hello to us. They wanted to shake our hands, take our photos, and practice their English. To tell them that we were American really lit up their faces.

Most people were gathered in the main intersection in town. We joined the crowds here. I noticed that a stepladder was set up for people to climb to take aerial photos of the crowds. I wasted no time in asking if I could have a turn. I climbed up to take my shot, towering over a sea of people.

It didn’t take long until I was spotted on top of the ladder and all of the attention turned to me. People started cheering, hooting, and laughing. Now their cameras were turned to me. Tim was encouraged to climb up with me, and there we stood, looking out over the crowds of people, getting much more attention that I ever anticipated.

It was thrilling getting this much attention, even just for a moment. Never in my life had I been in the spotlight like this. This was one of the coolest travel moments yet. 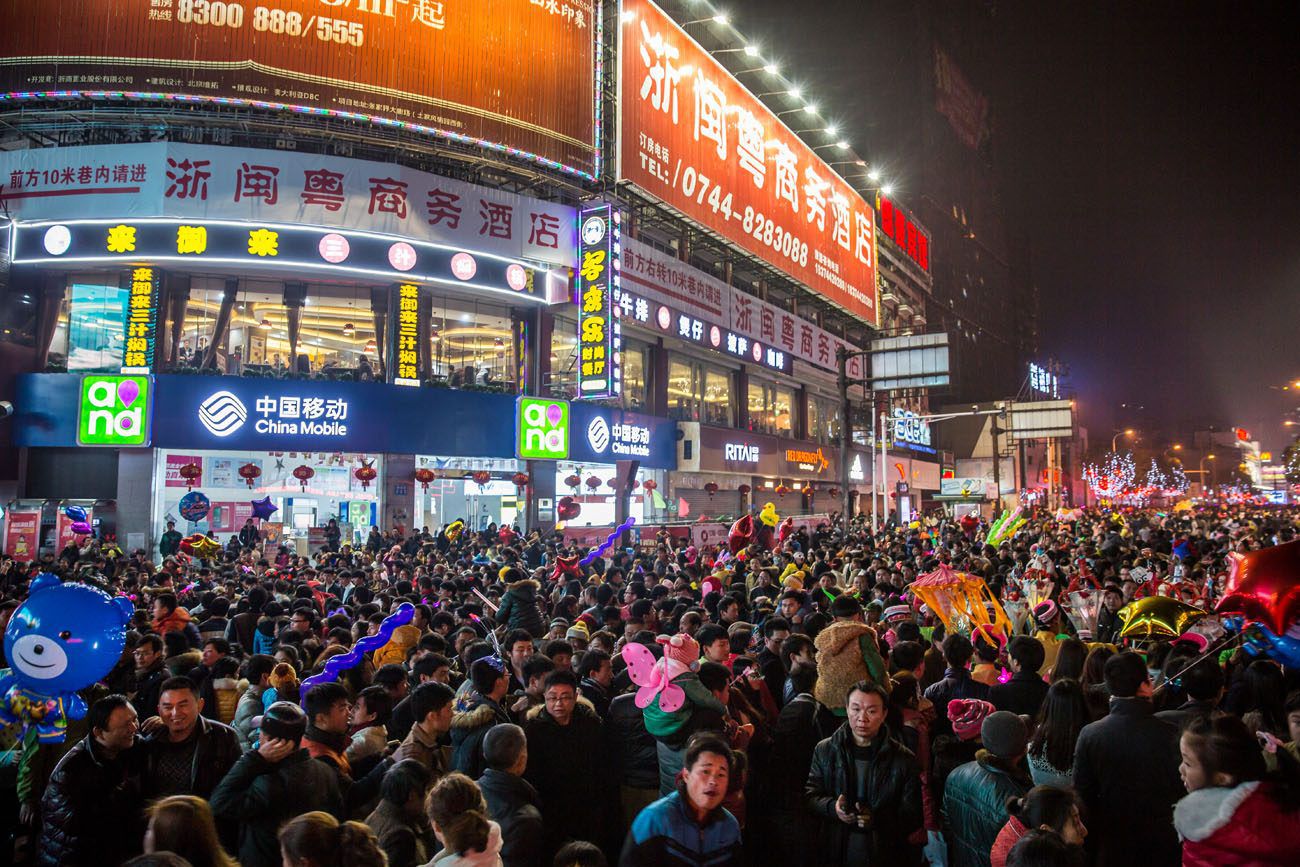 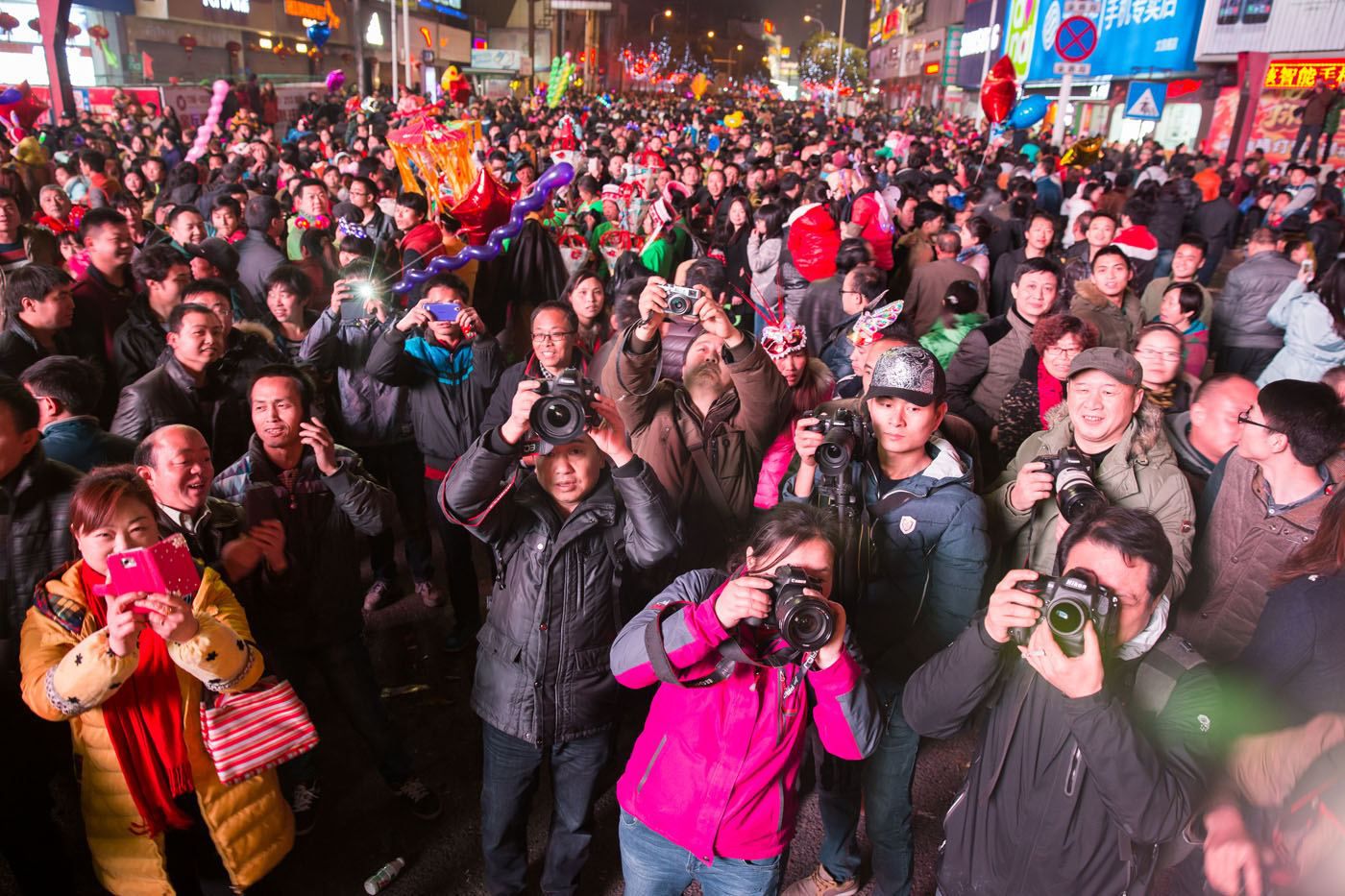 And the final surprise about Zhangjiajie…I had never planned on even posting about this city. I thought the National Park was going to steal the show. We just had so many interesting and unique experiences here that I couldn’t help but write about them.

Zhangjiajie, such a surprising and wonderful place!

Read more about Zhangjiajie in our articles Photo Tour of Zhangjiajie National Forest Park and Tianmen Mountain: How to Have the Best Experience, or check out all of our China articles on our China Destination page. 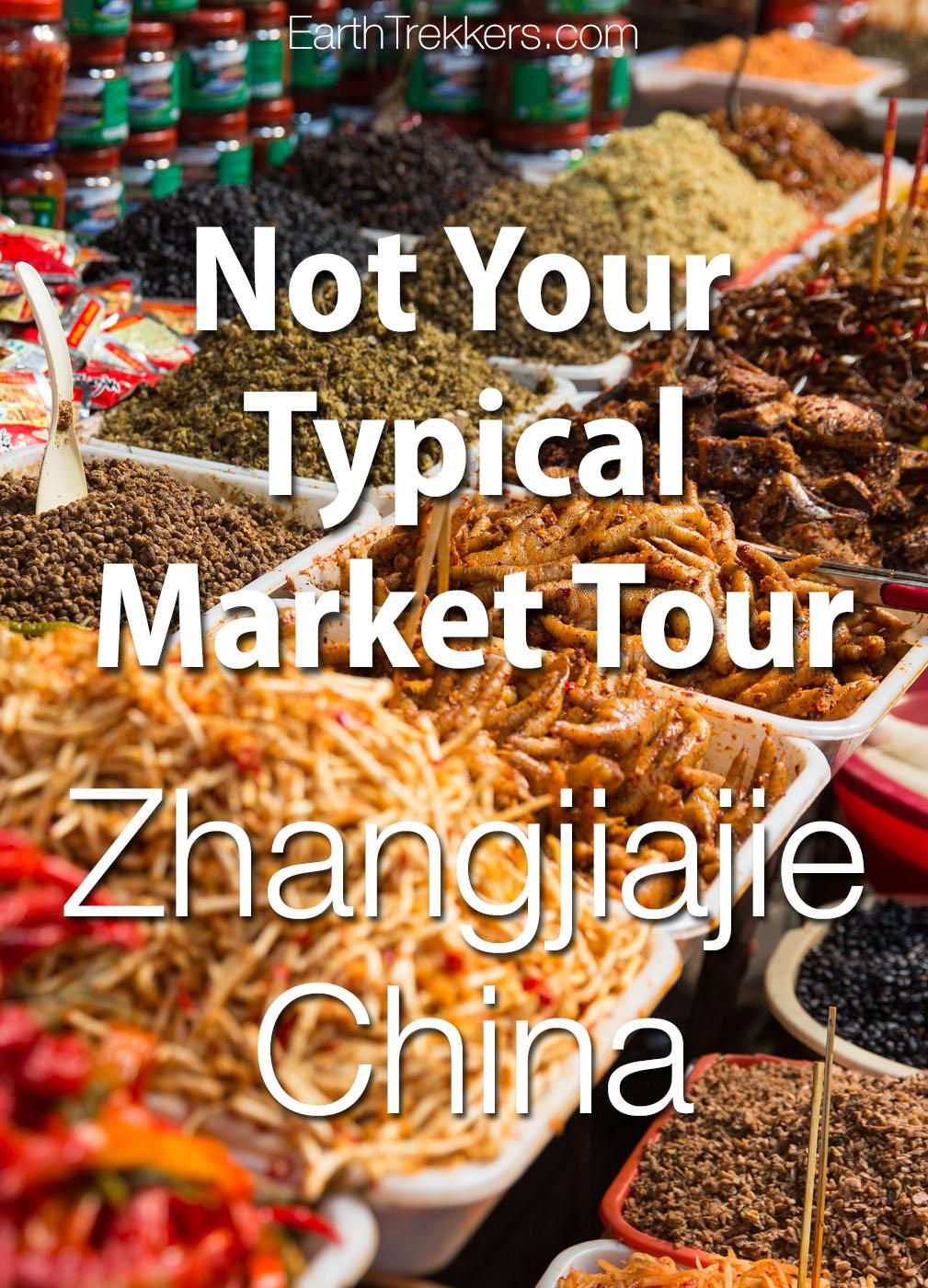