Tips for Walking the Freedom Trail in Boston 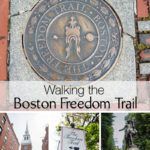 Walking the Freedom Trail is one of Boston’s best experiences. On this walk, learn about Paul Revere’s midnight ride, visit historic meetinghouses and churches, and learn about battles and events that sparked that start of the Revolutionary War.

What is the Freedom Trail?

The American Revolutionary War began in Boston. The Freedom Trail is a 2.5-mile route that takes you to 16 important sites during this war.

The walk starts (or ends, depending on the direction you choose to walk it) at the Boston Common and ends (or starts) at the USS Constitution and Bunker Hill. Along the walk, you will visit historic churches, meeting halls, cemeteries, and battlegrounds. 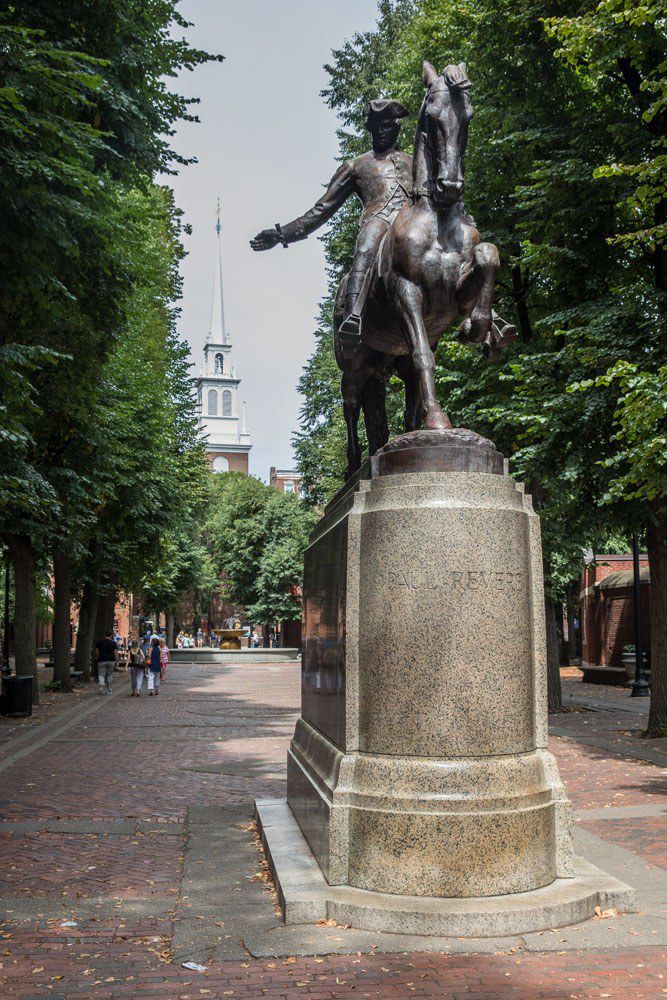 How Long Does it Take?

This can vary. How much time you spend at each site will have a big impact on how long it takes to walk the entire trail.

If we did it again, we would plan to have a break at about the halfway point (which is near Faneuil Hall and Quincy Marketplace). It’s a great walk and we learned a ton, but it does get to be a bit of history overload towards the end. Having a scheduled break in the middle might help with this.

Tours of the Freedom Trail

You can also purchase a guided walking tour through GetYourGuide. This tour includes the portion of the Freedom Trail between Boston Common and Faneuil Hall as well as other Boston sites. The tour cost $45 for adults and $22.50 for children.

GetYourGuide also offers a self-guided tour of the Freedom Trail via an app you install on your mobile device. The app includes audio narration, a live GPS map, and the route from stop to stop. The cost is just under $10. Click here to learn more about this option.

Note that these tours do not include admission to the sites on the Freedom Trail.

How to Walk the Freedom Trail Without Taking a Tour

We chose to walk it on our own. I printed out the Freedom Walk Trail brochure, which provided information on each of the 16 sites. At each stop, we took turns reading about what we were visiting. Joining a tour probably would have provided more information, but for us, it was nice to explore the Freedom Trail at our own pace. 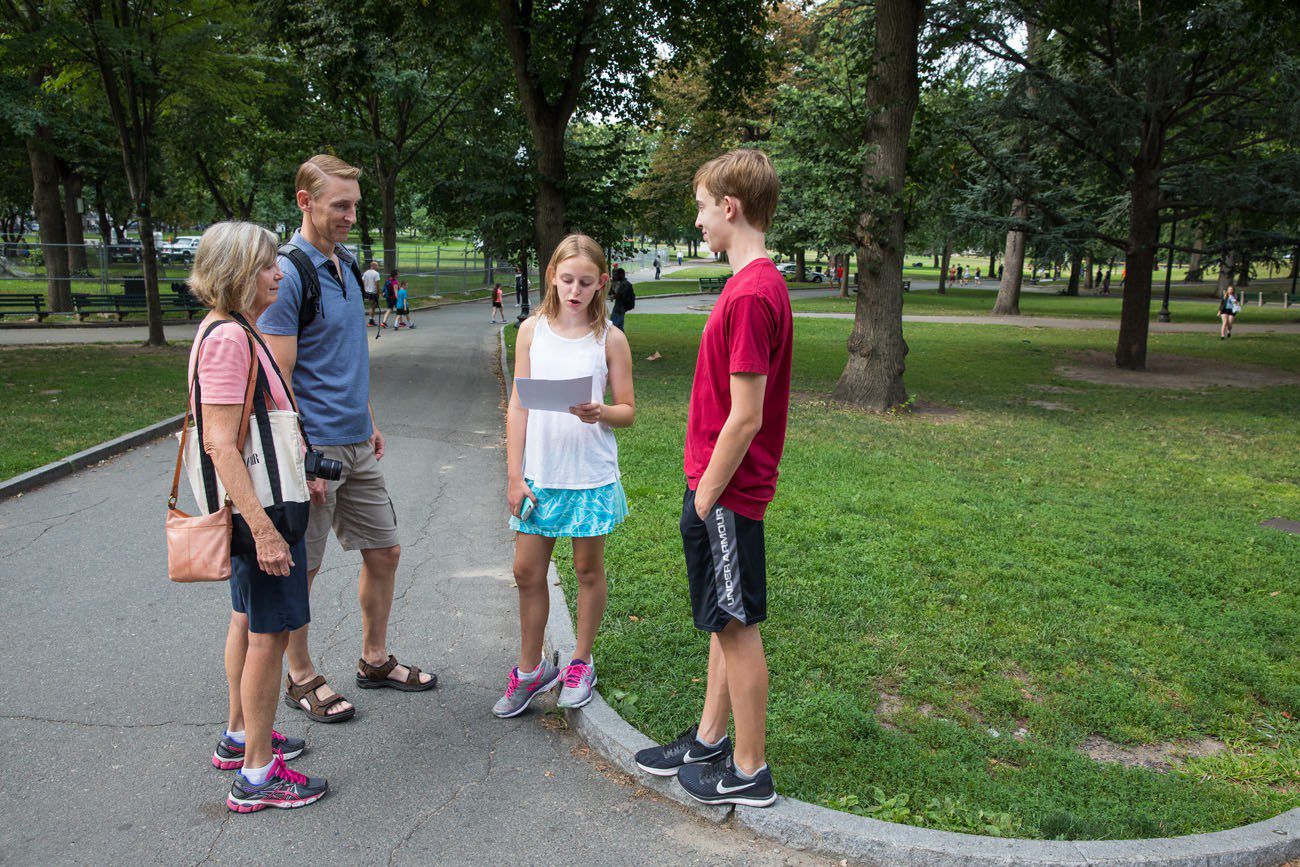 Each of the 16 sites is marked with a Freedom Trail plaque on the ground. A narrow, red brick trail connects all of the sites. Just follow this trail through the city. 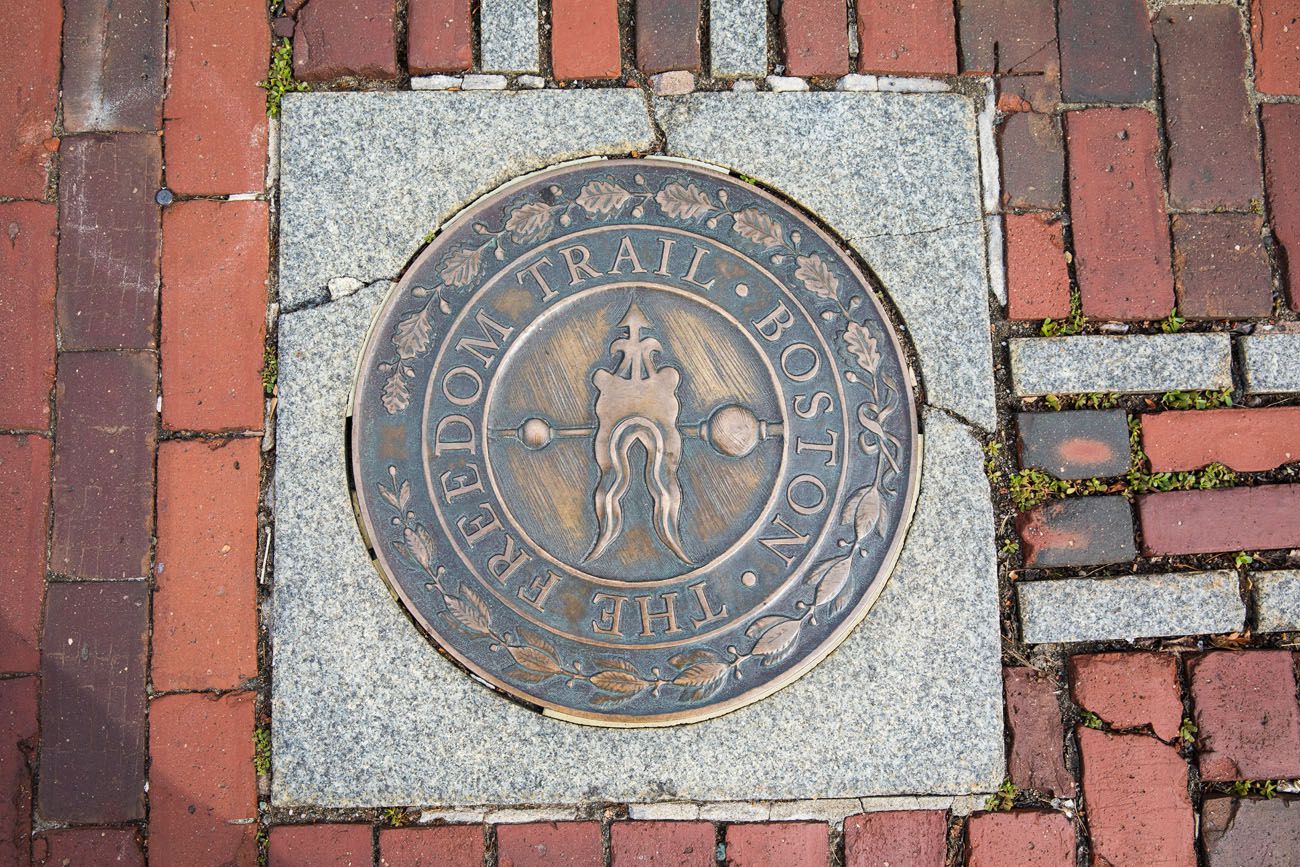 Map of the Freedom Trail

How to Use This Map: Click the tab in the top left hand corner of the map to view the layers. You can click the check marks to hide or show layers. If you click the icons on the map, you can get more information about each point of interest. If you click the star, this map will be added to your Google Maps account. To view it on your phone or computer, open Google Maps, click the menu button, go to “Your Places,” click Maps, and you will see this map on your list.

Here is a quick overview of the sites you will visit on the Freedom Trail. 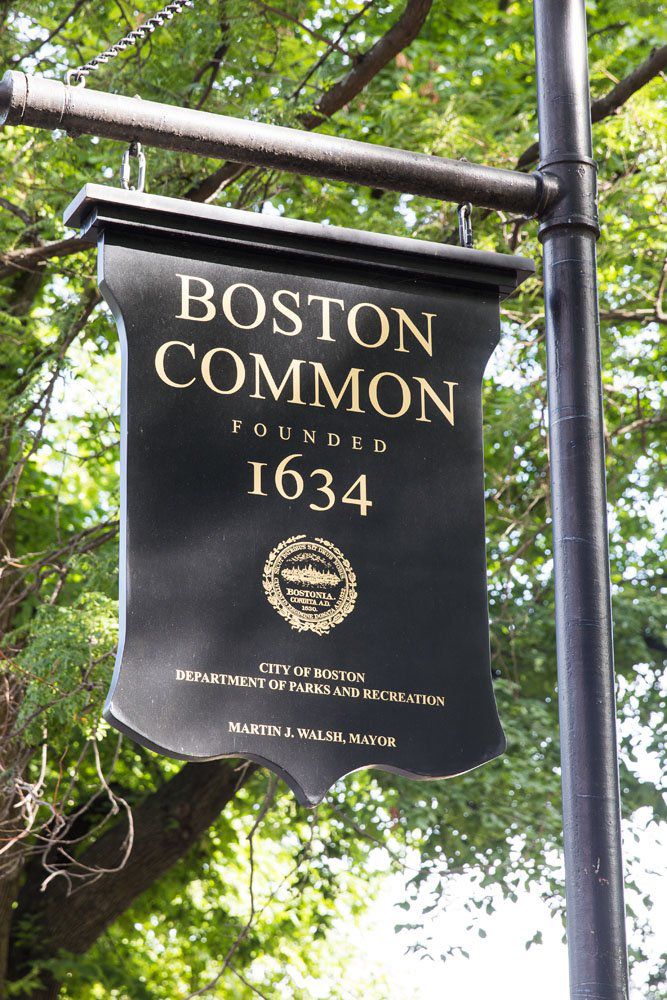 This is the oldest public park in the United States. It was once a grazing area for sheep and later become a training ground for the militia. 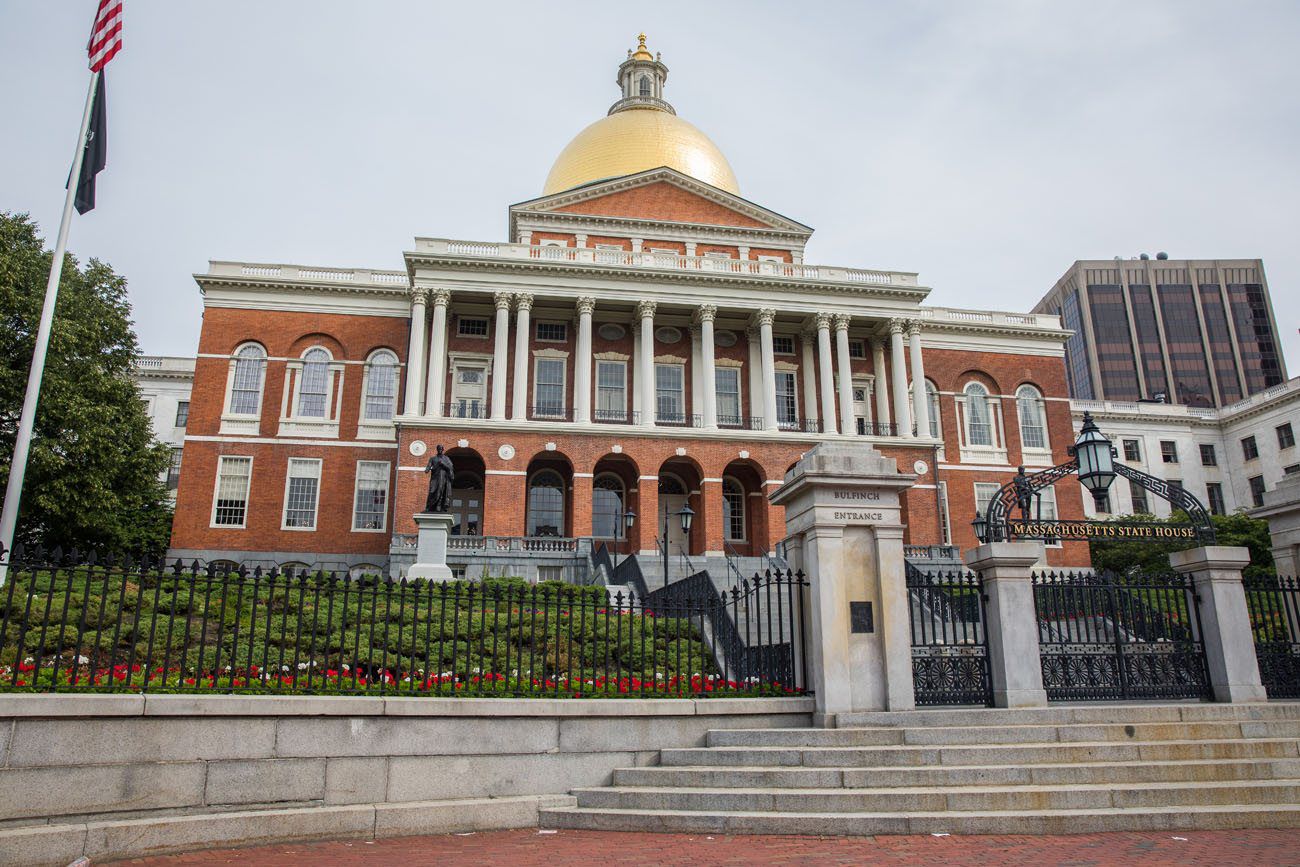 Built in 1798, this is the state capitol building and the seat of government for the Commonwealth of Massachusetts. It is free to visit and open during the weekdays from 9 am to 5 pm. You can also schedule a tour of the building.

This is a landmark in Boston and a site where slavery was protested and woman’s suffrage was supported. Cost: free 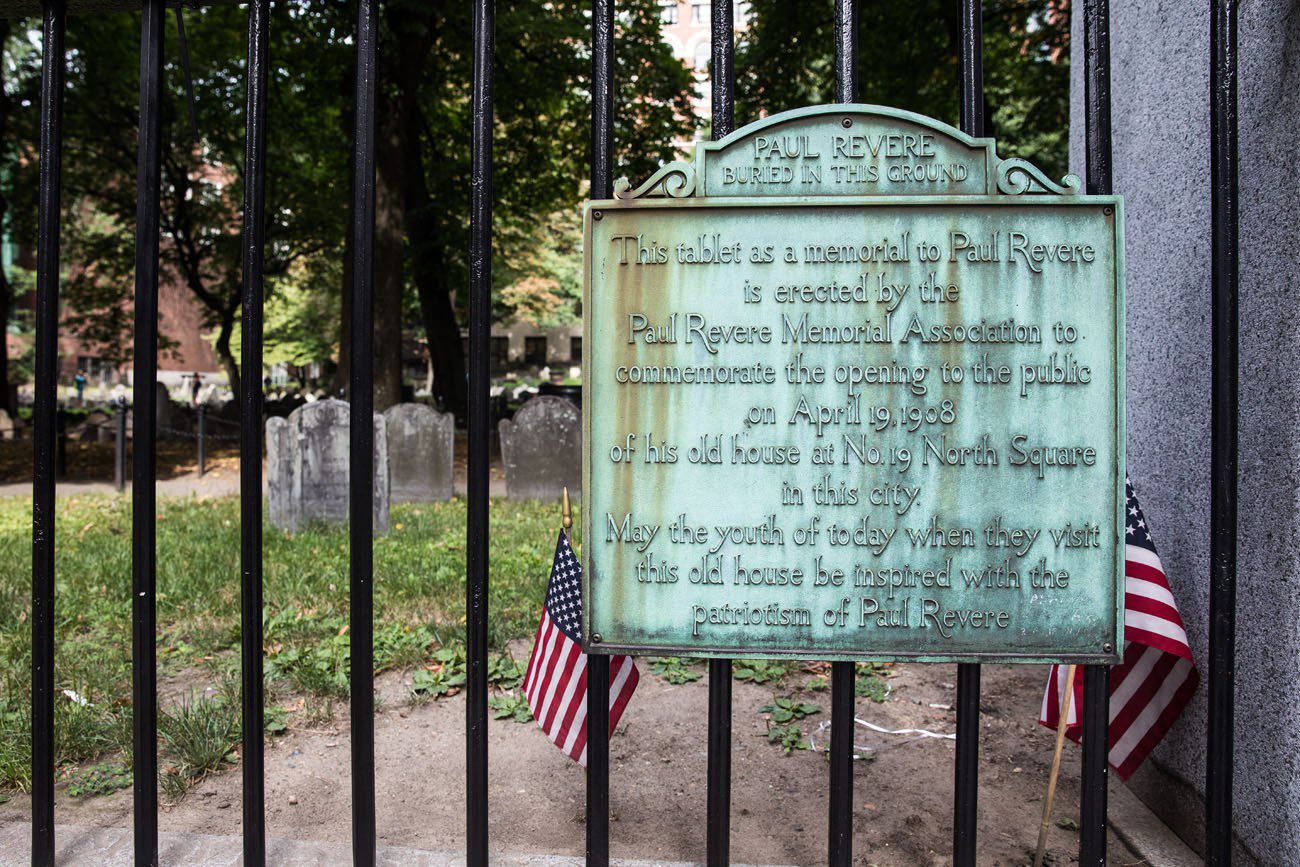 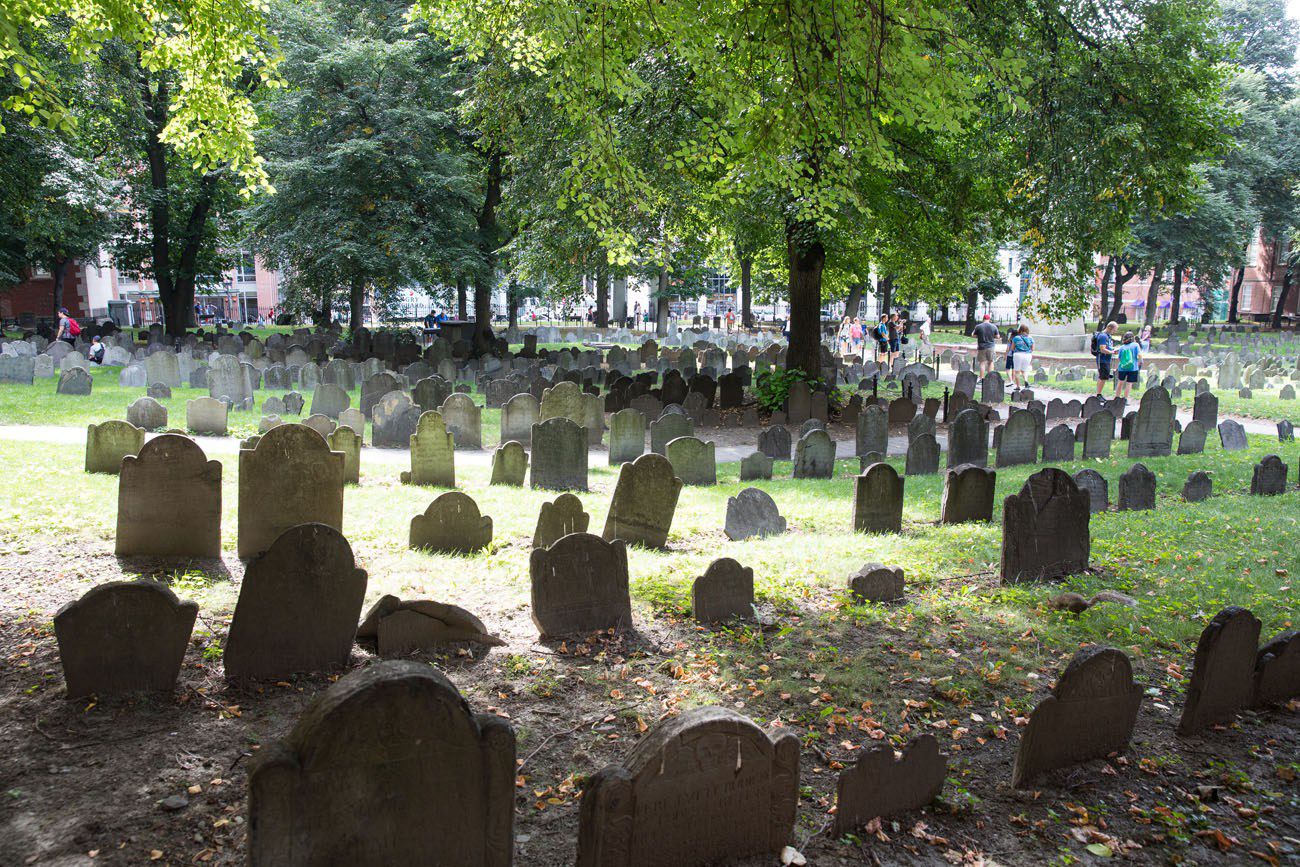 In this very old cemetery, search for the tombstones of Paul Revere, Samuel Adams, and Benjamin Franklin’s parents. Cost: free 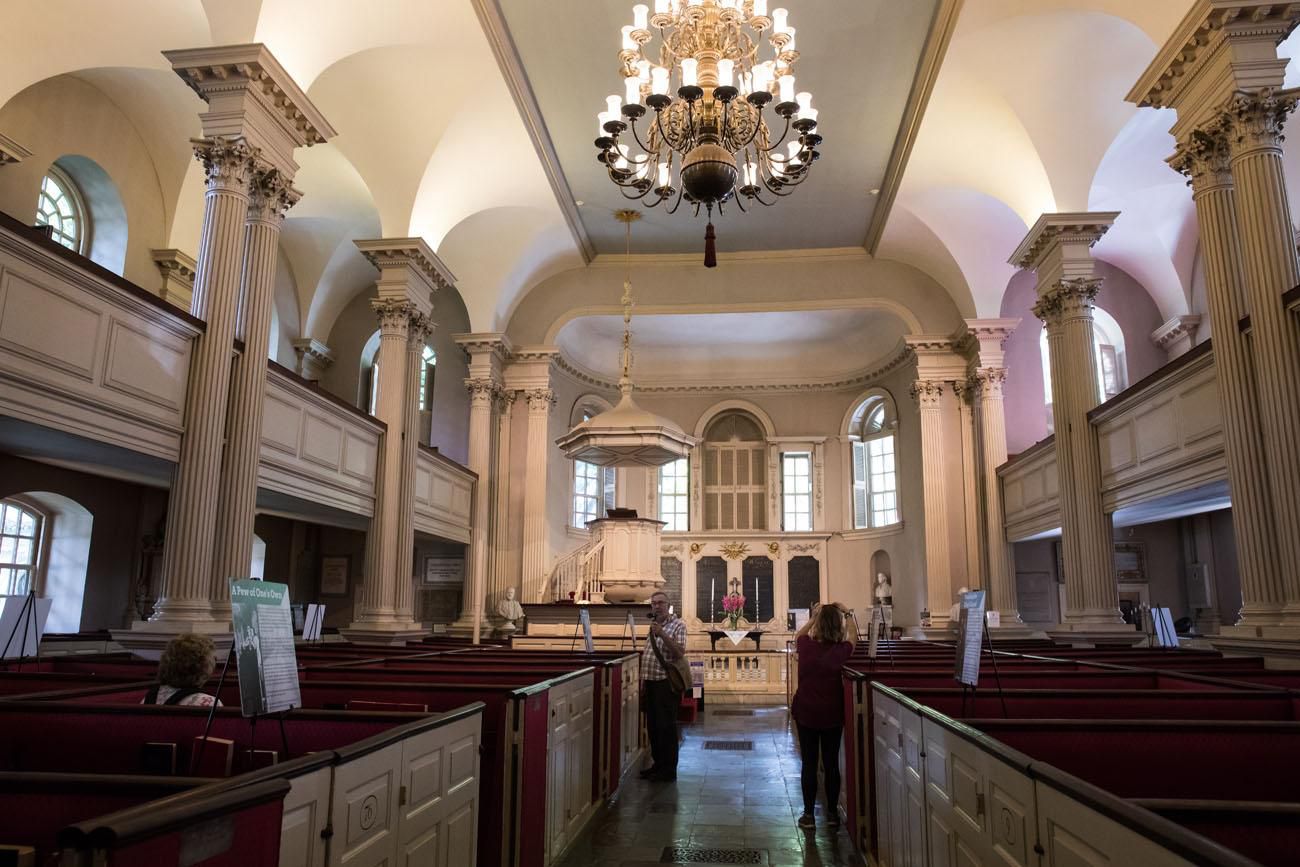 Established in 1686, this is one of the oldest churches in Boston. It houses the oldest pulpit still in continuous use in the United States. Sitting next to the King’s Chapel is another cemetery. Mary Chilton, the first woman to step off of the Mayflower, is buried here. 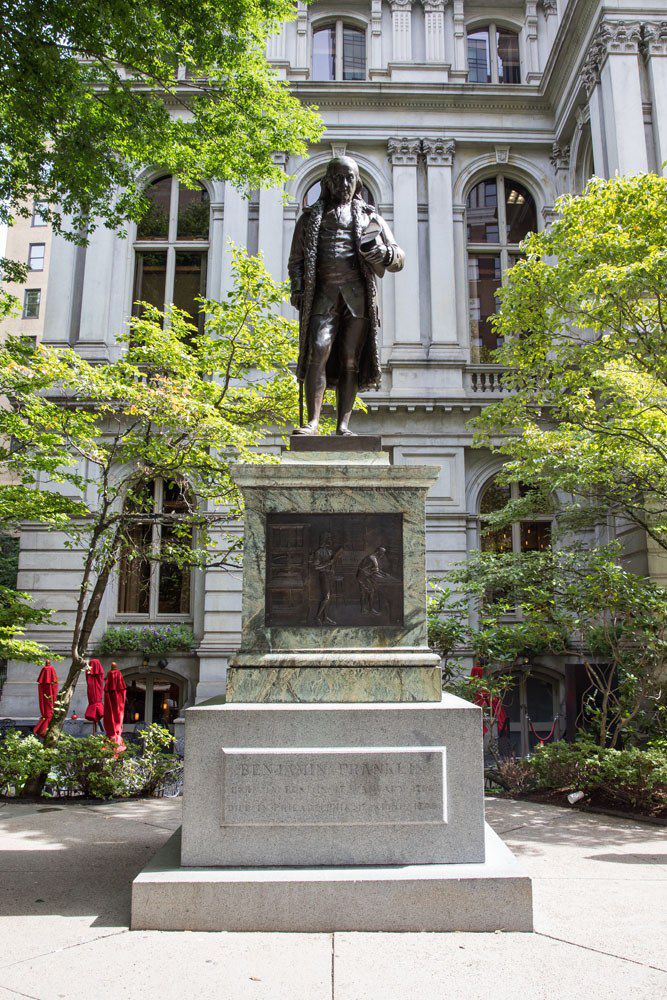 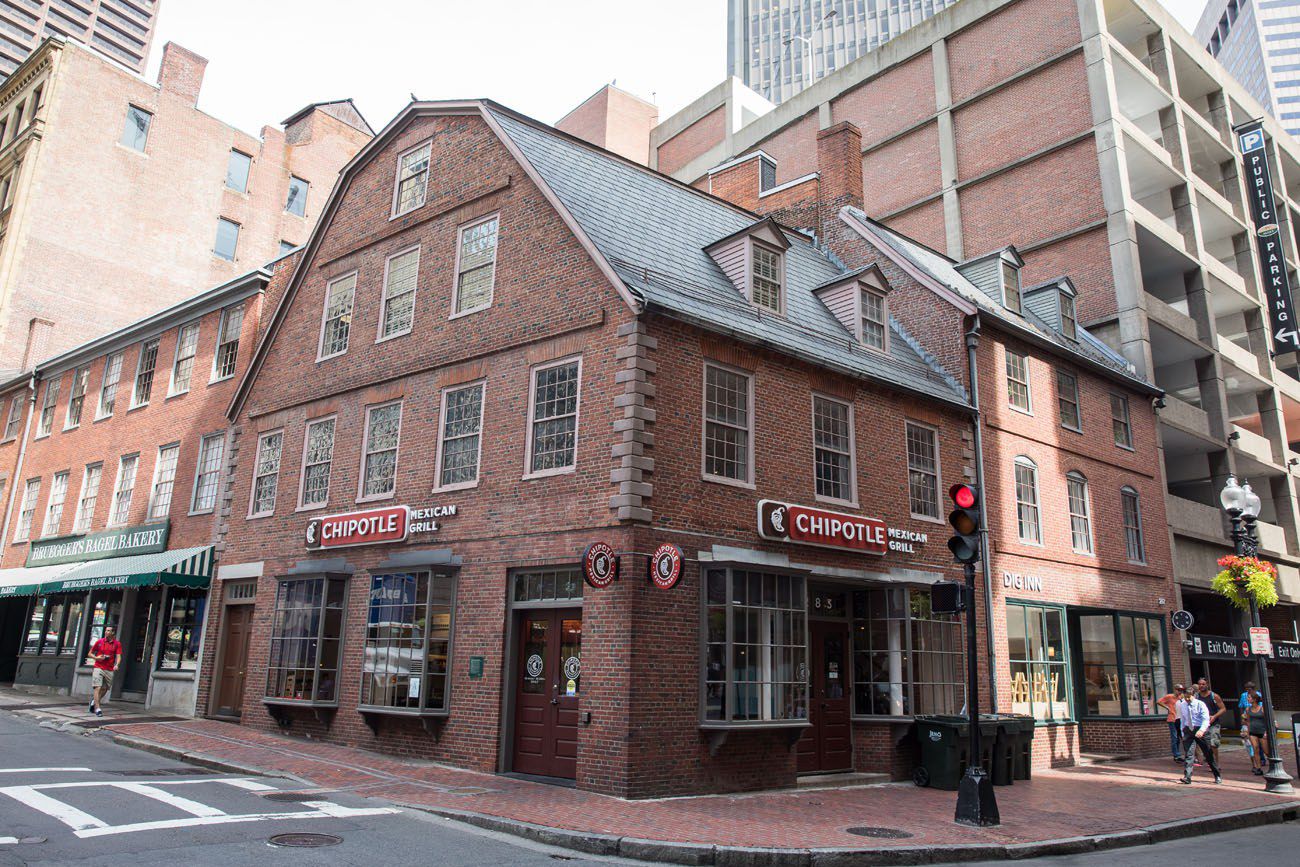 This was once a bookstore, selling works by Ralph Waldo Emerson and Louisa May Alcott. Now it is a Chipotle. Hungry yet? 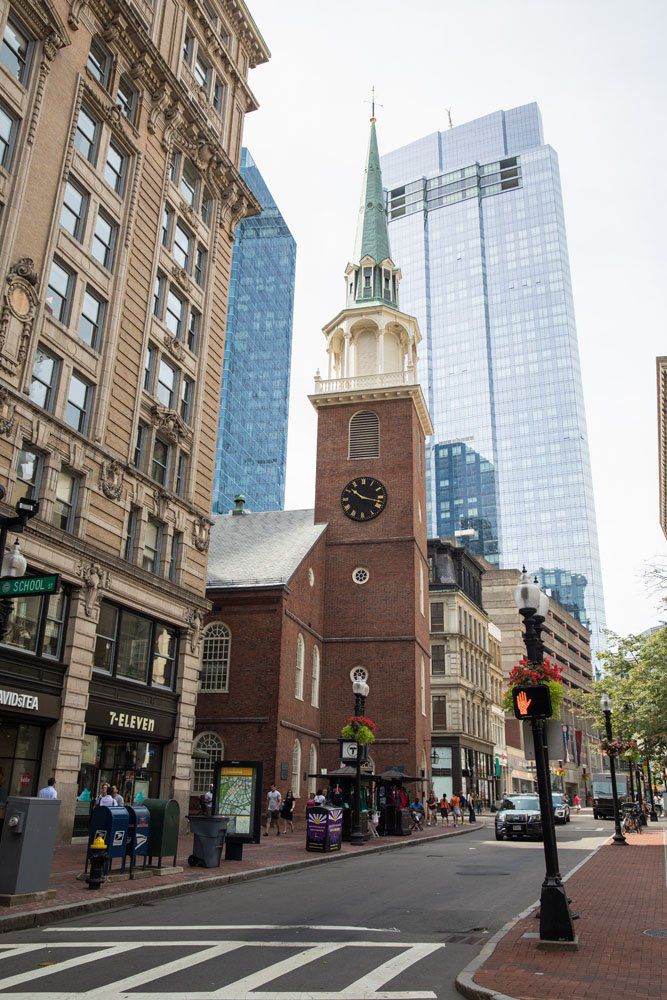 It was here that people protested the tax on tea, which led to the Boston Tea Party. Cost: $6, included on the Boston Go Card

Just across the street, at 1 Milk Street, is where Benjamin Franklin was born. 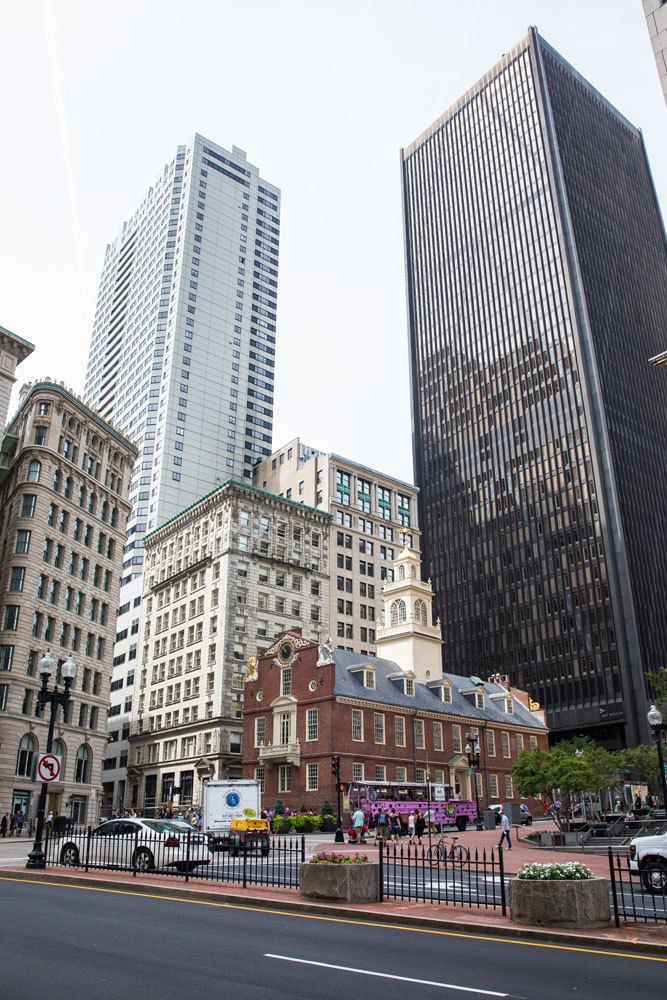 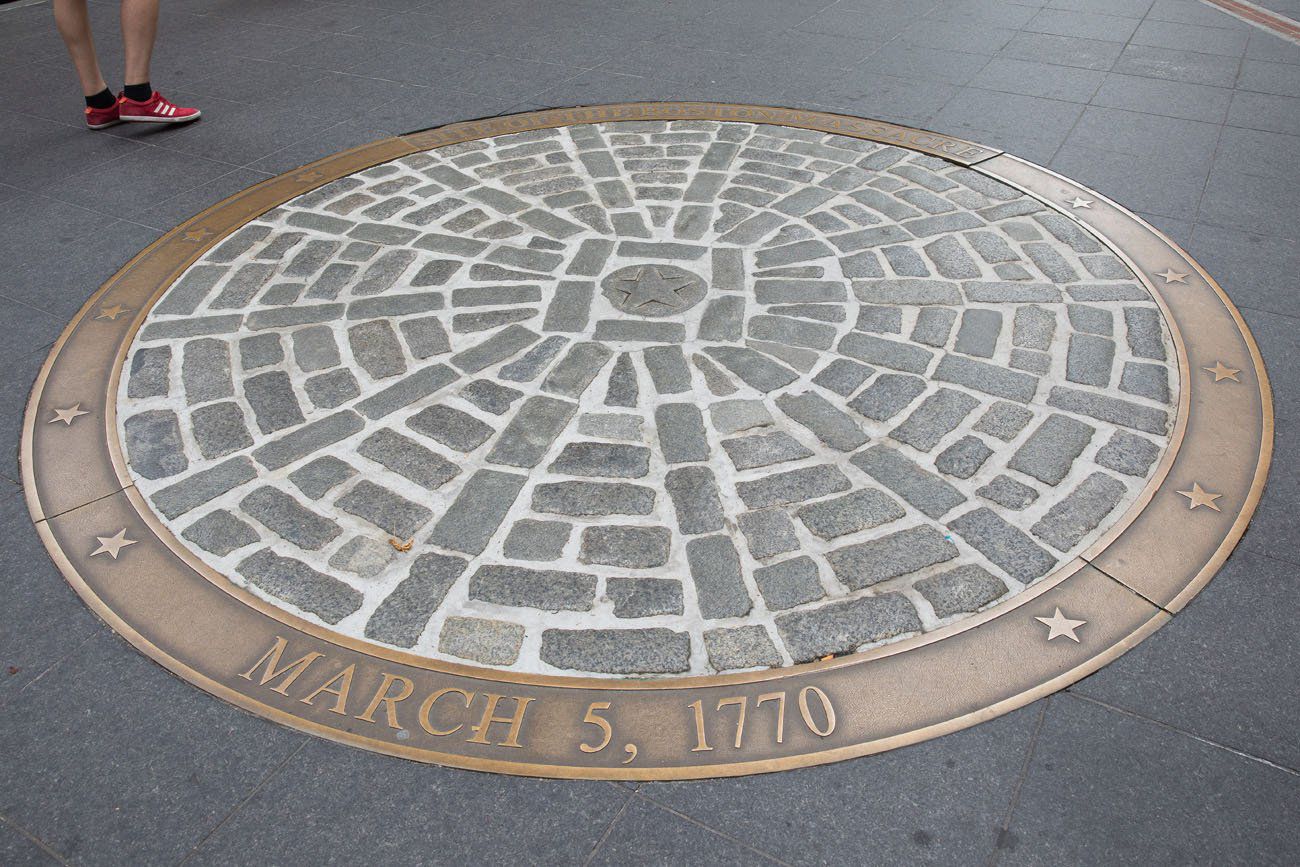 On March 5, 1770, a skirmish broke out between Redcoats and a crowd of Boston residents. Five of these Bostonians were killed, which Paul Revere called a “bloody massacre.” This event is memorialized with this plaque on the ground. 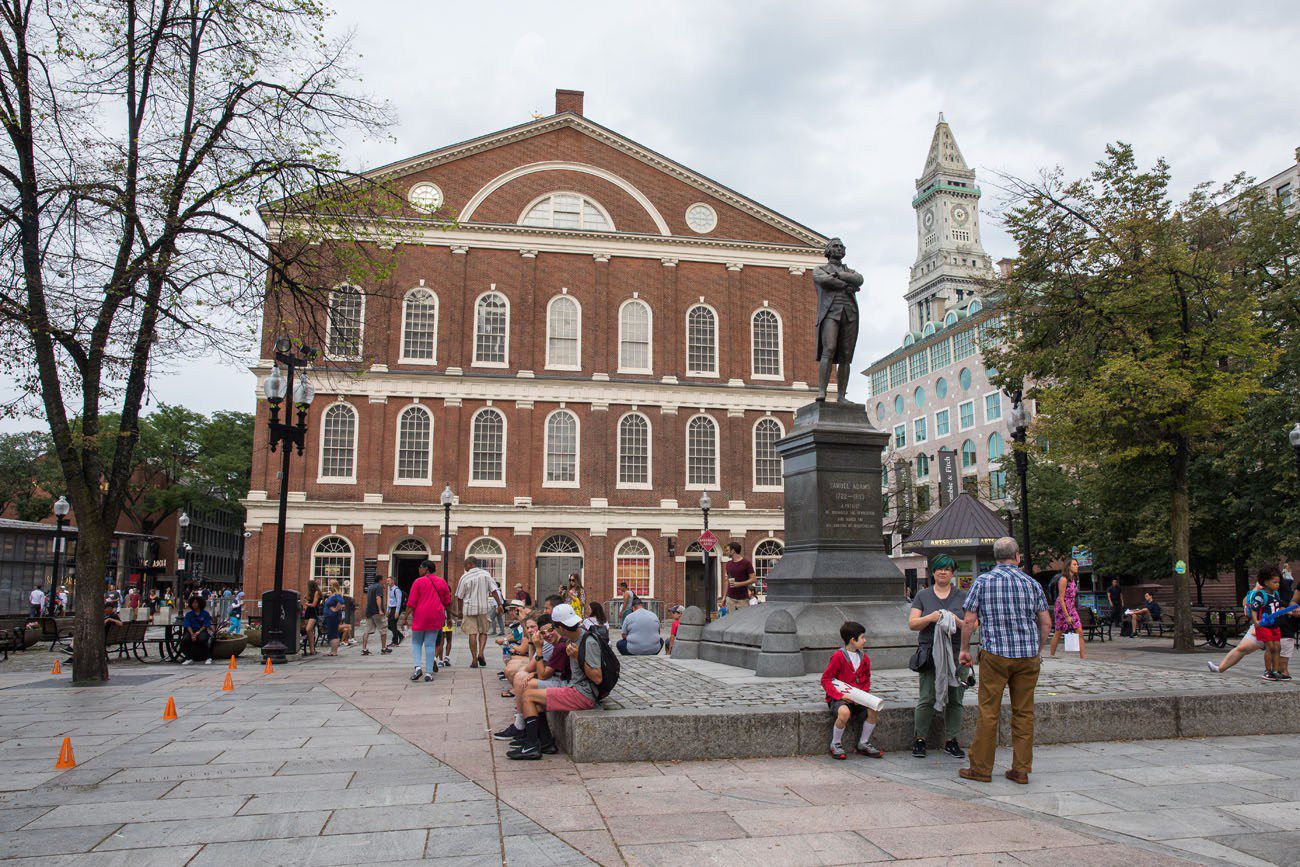 This was another meeting venue where people protested against British oppression. The first floor is a marketplace and on the second floor is the Great Hall where the debates and protests took place. Cost: free 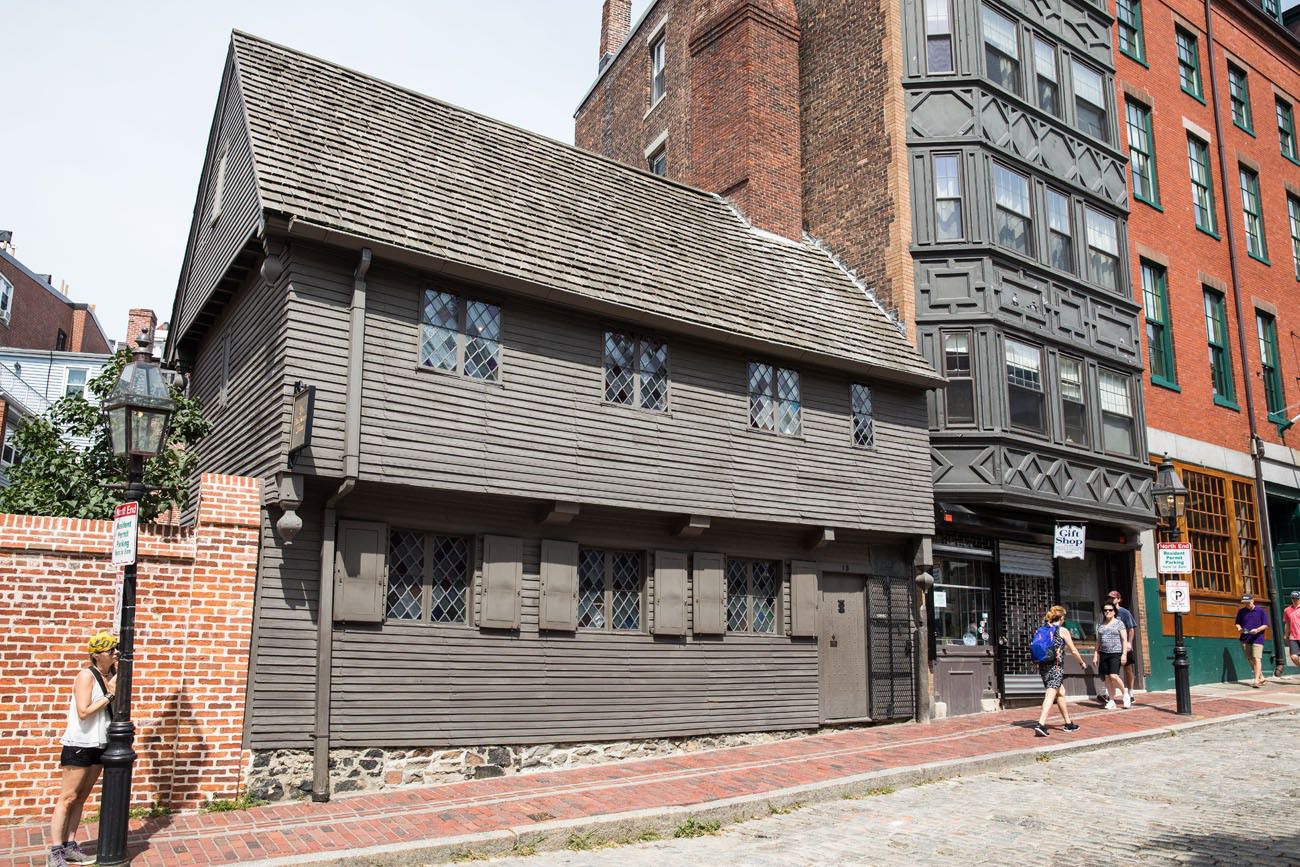 Built in 1680, this is the oldest building in Boston. Paul Revere purchased this house when he was 33 years old and lived here in 1775 when he went on his famous midnight ride. Cost:$5, included on the Boston Go Card 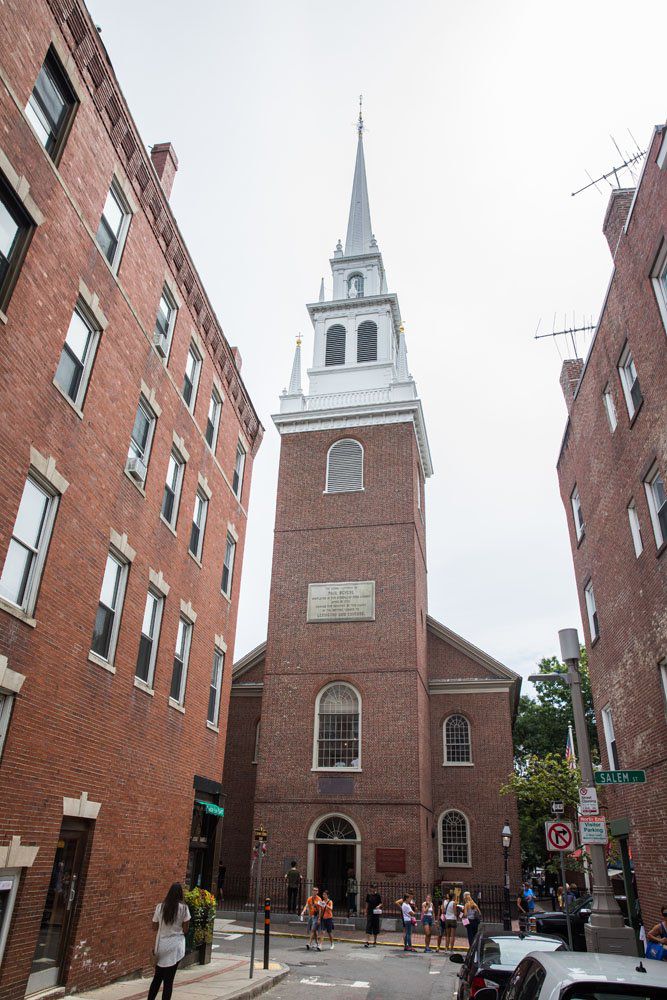 “One if by land, two if by sea.” These famous words, referring to signal lanterns on Paul Revere’s midnight ride, ignited a revolution. These lanterns were hung in the tower of this church on that famous night. Cost: free, donations appreciated 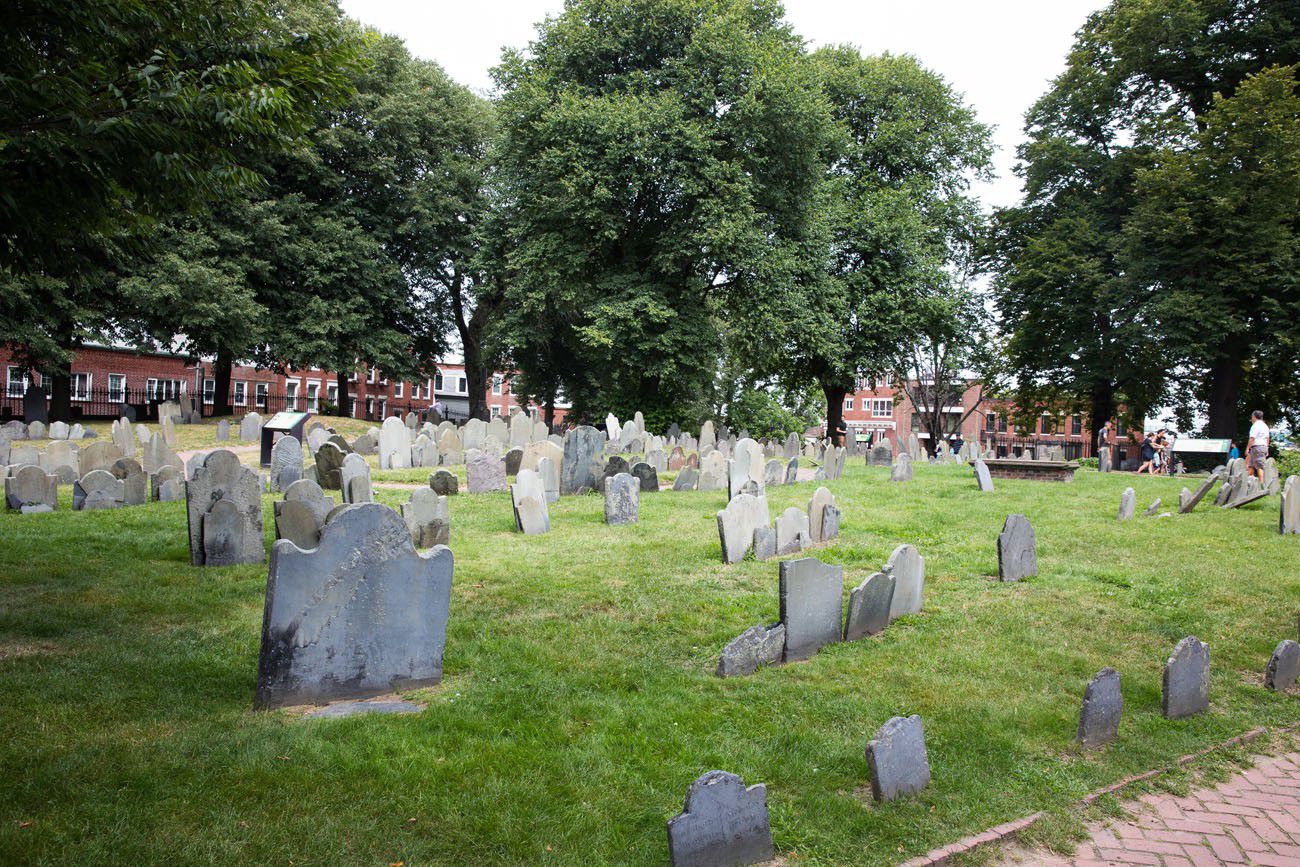 This is another very old cemetery. The British also used this spot to fire their cannons during the battle of Bunker Hill. Cost: free 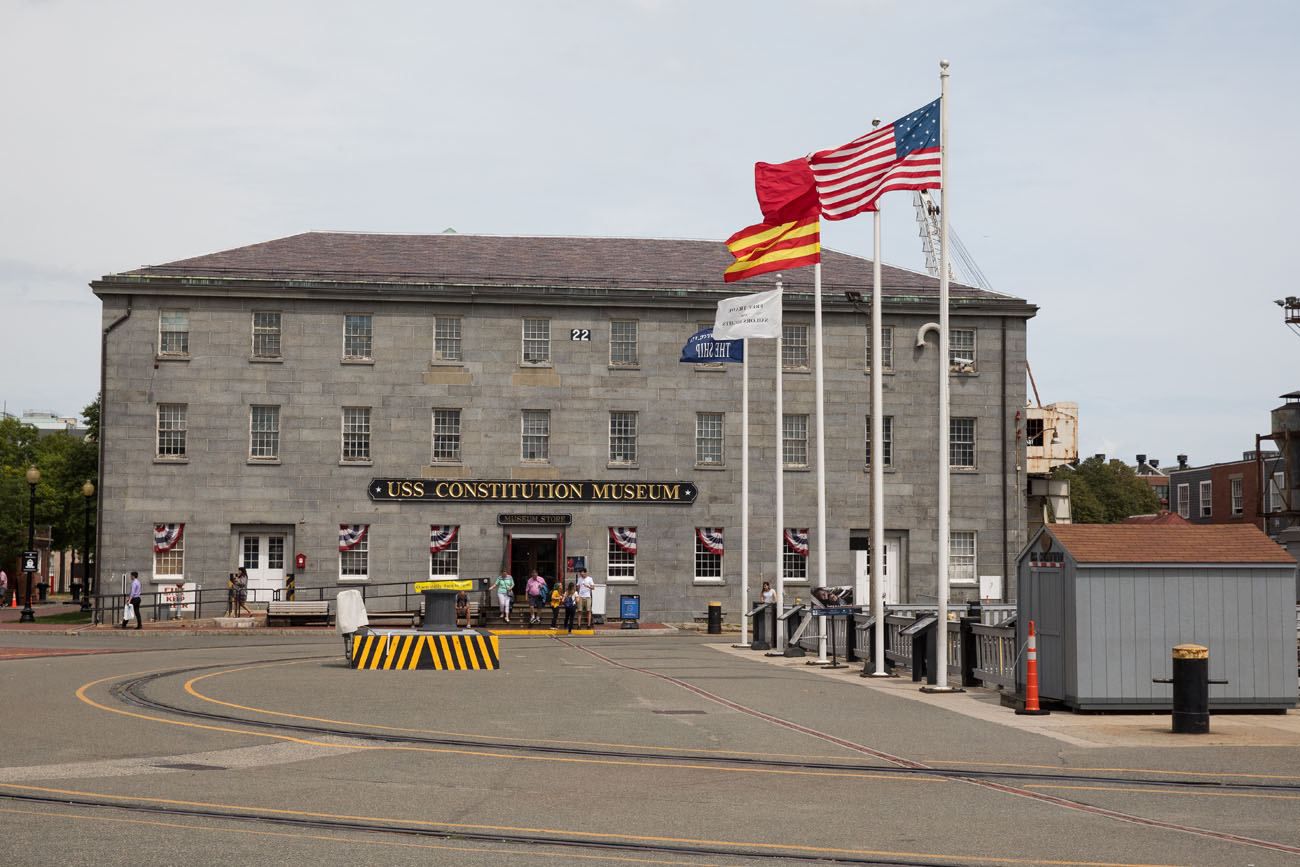 This is the site of the first major battle of the American Revolution. You can climb the gigantic granite obelisk for decent views over the city. During the summer months, it can be hot and crowded inside. Cost: free, open 9 am to 4:30 pm, 294 steps to the top. 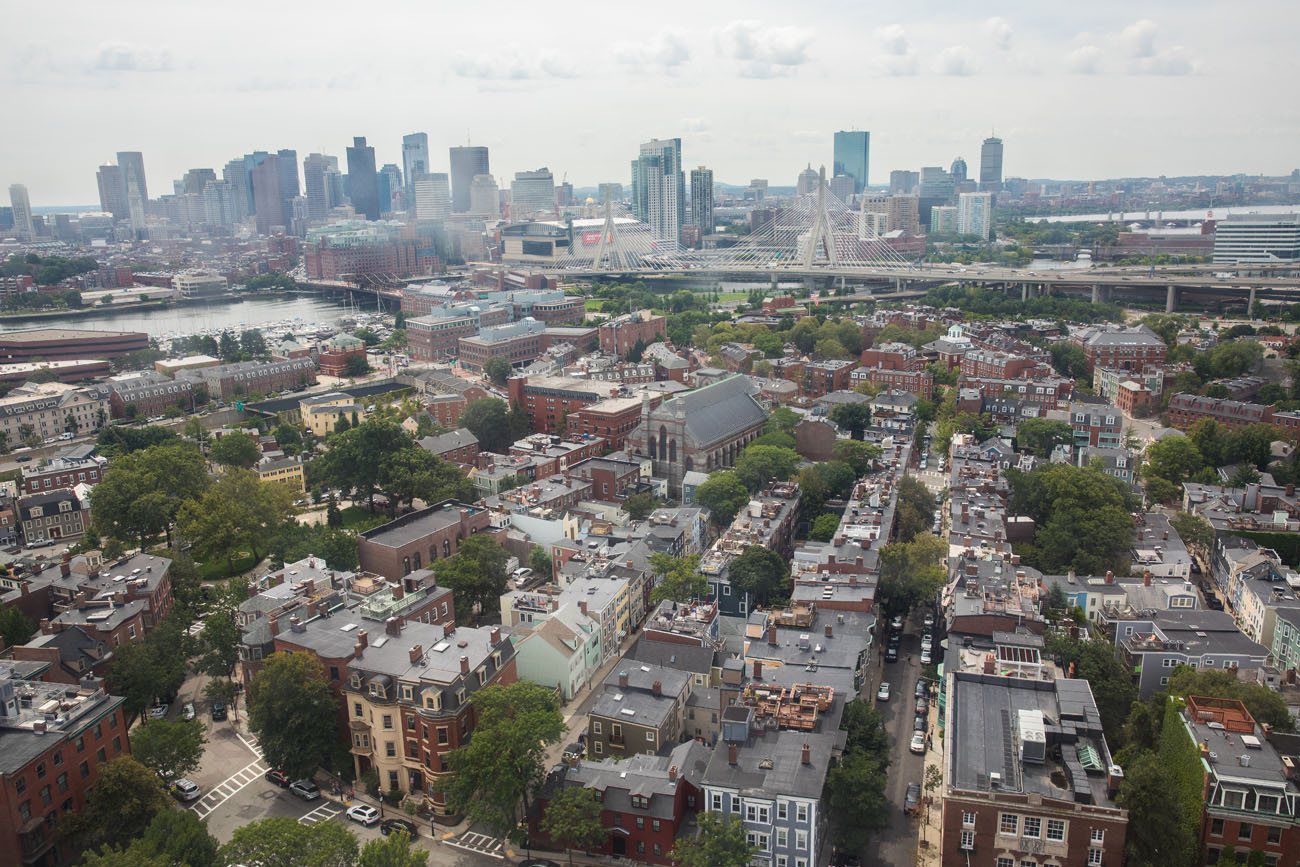 If you want to walk the Freedom Trail, but don’t necessarily want to enter every single site, which ones should you visit? Here are our favorites:

You can walk the Freedom Trail in either direction. If you start at Bunker Hill in the morning, you can climb the obelisk before the crowds arrive.

Most sites are open from 9 to 5, but this can vary depending on the day of the week and the season. If you plan on entering these sites, make sure you check the operating hours before you go.

Have a meal at Warren Tavern. This is a historic tavern just a few blocks from Bunker Hill. It’s the perfect end to a day on the Freedom Trail (if you start at the Boston Common).

To get back to the Boston city center, we used Uber. 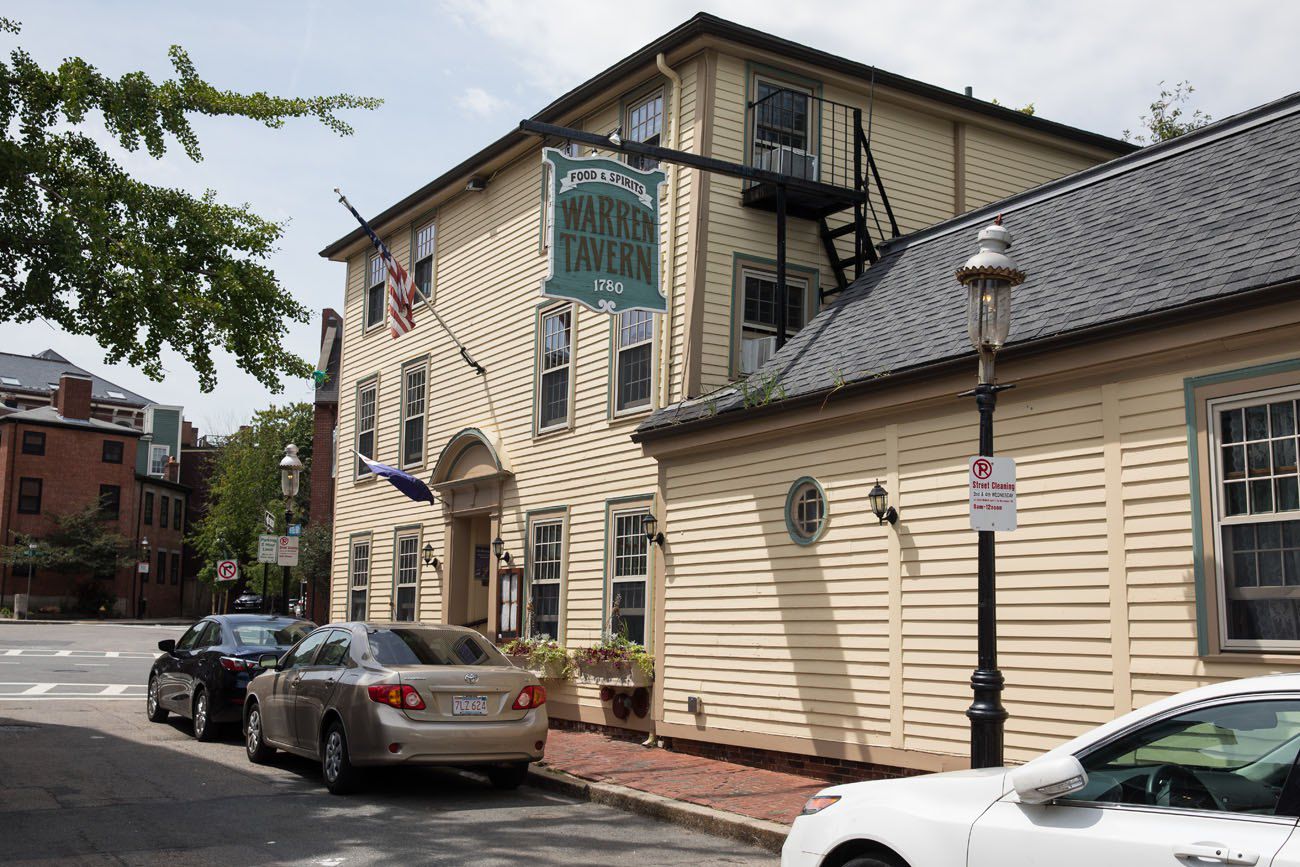 Here is more information for your trip to Boston:

The Big List of Things to do in Boston

Do you have any questions or want to offer advice about walking the Freedom Trail? Comment below!

Read all of our articles about the USA in our United States Destination Guide. 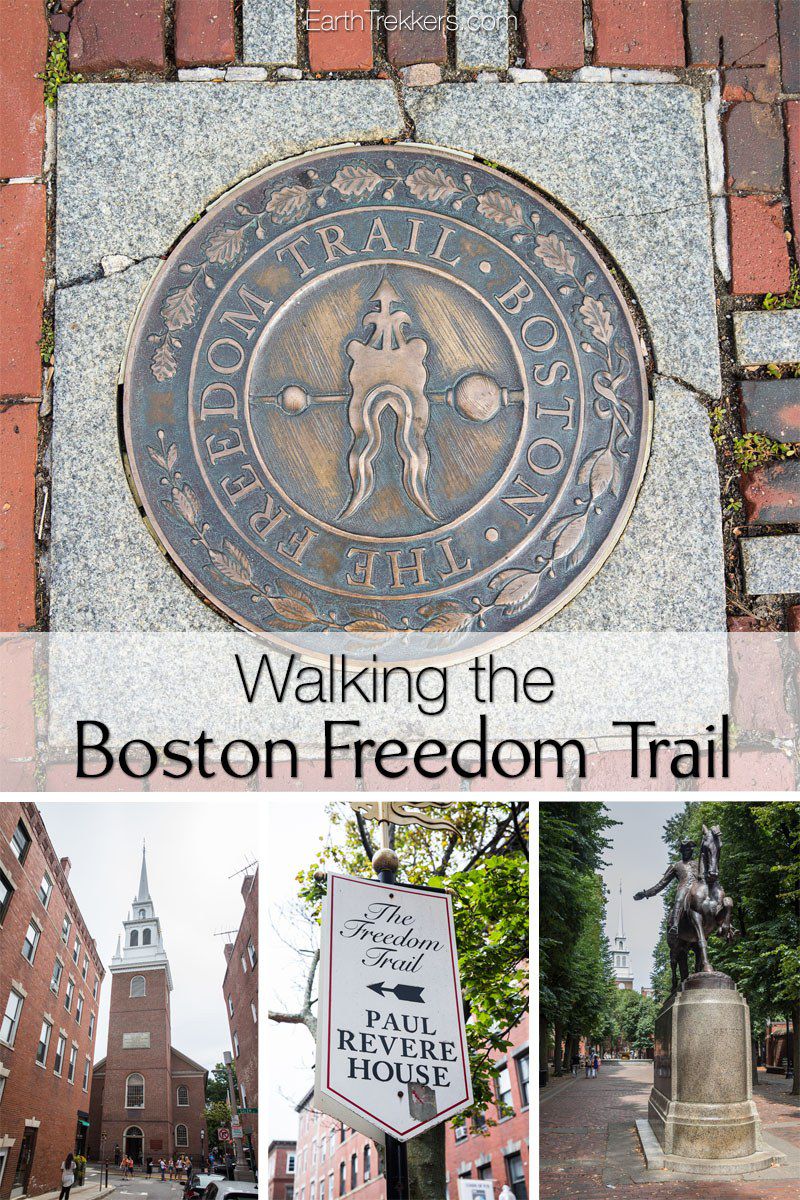