Excerpts from a Travel Journal: Quotes from Tyler and Kara 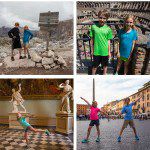 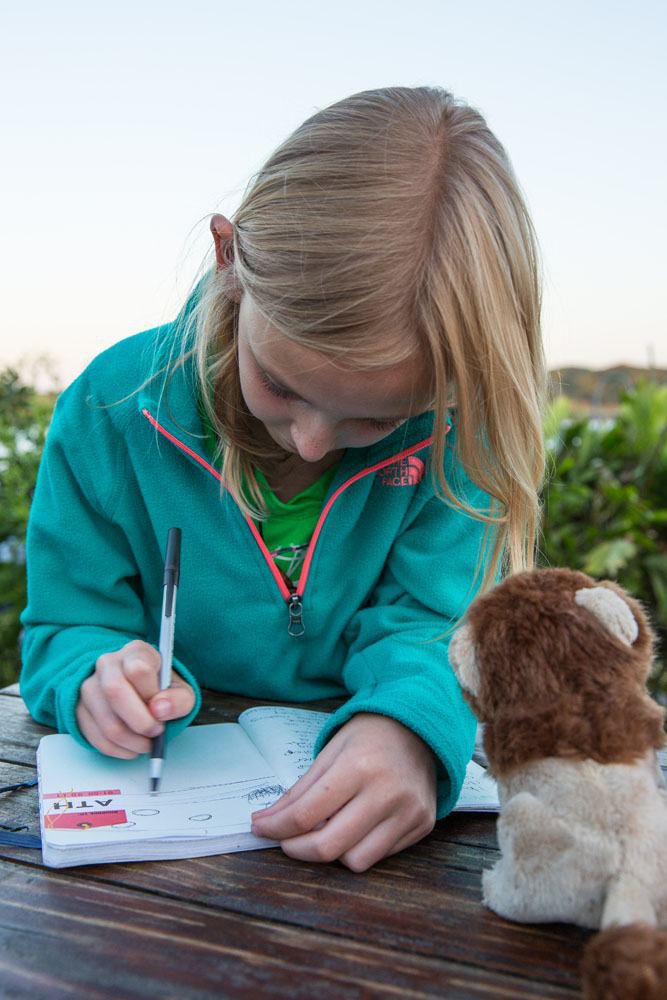 Tyler, Kara, and I each wrote in a journal while traveling. Actually, after 13 months of traveling, we developed quite a stack of journals. Everyday we would write at least a few sentences about the most memorable events of the day…the good, the bad, the beautiful, and the most boring, annoying, and exciting moments that happened while traveling.

The best excerpts come from Tyler and Kara, who tell it like it is. See what traveling is like through their eyes, with excerpts taken from their travel journals. Many of these are hilarious and it is enlightening to get their perspective on our travels.These quotes are from the first few months of our travels, from day one when we flew from the US to Europe, through our travels in Africa.

This was a super fun post to write! I hope it is just as entertaining to read.

Today is the day! We finally leave the country for a year! OMG I am so excited! I will be a little sad though because I will miss my friends. But on the bright side, we’re travelling around the world!

In Rome, on day 2 out of 396, Tyler is already bored with the museums. Here is his impression of the Borghese in Rome (and how Tim tries to keep him interested):

I thought the Borghese was soooooo boring. I was tired and bored already, and really that’s how I feel every time I go to a boring museum. Dad wanted me to count how many nipples I could find, but it didn’t interest me. Yawnnnn…

Now it’s Kara’s turn, also on the second day of the trip. We toured the Borghese, the Colosseum, and then the Roman Forum. Never did we tell our kids that this trip was a “vacation:”

We learned a lot of history but I didn’t listen much. I mean, this is vacation! Not school! Finally we walked back to the hotel. 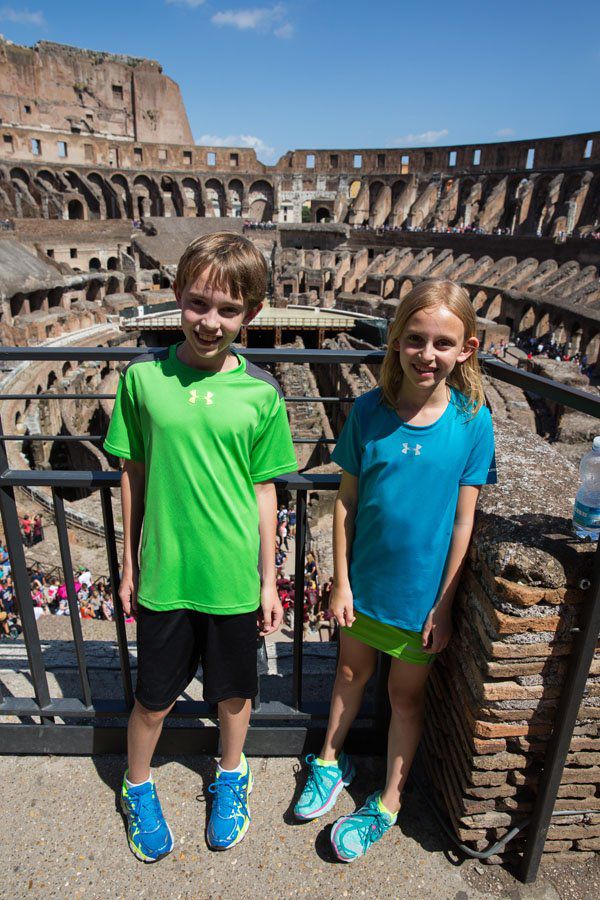 In Rome, after biking the Appian Way, we toured the San Sebastian Catacombs, walking through underground tunnels in a small tour group.

From Tyler:  When we were finished biking, we visited the Catacombs of San Sebastian, which was a little spooky and boring because we had to be in a tour group (I hate those). But whatever, we would probably have gotten lost without one, and I don’t think we would have gotten Google Maps to work down here.

We visited the Blue Grotto while at Capri. Here is Tyler’s experience:

Eventually the tour around the island ended when we arrived at the Blue Grotto, and we were all just on the boat, waiting to go in. It was packed with other boats everywhere, and the rocking of the boat started to make me dizzy. About an HOUR later, we were still there and hadn’t made any progress. Boats came and went, and now I felt like I was going to puke because of the constant rocking. Ughhhhhhh! But luckily a boat came just in time to pick us up and take us into the Grotto…

The moment I boarded the small wooden rowboat into the Grotto I felt 50x better! When it was time, we had to lay back so our heads didn’t get chopped off since there was a very narrow entrance, and leaped into the Grotto! The Blue Grotto was amazing! It was smaller than I thought, but the water was awesome. It was shining blue! Our captain sang an Italian song, and we just admired the water color.

Kara and the Blue Grotto:

We had to lay down when going inside of the Blue Grotto so that you didn’t get your head chopped off! But inside was beautiful! The water was so blue! In fact, it was the bluest water I’ve ever seen! No wonder it’s called the Blue Grotto! I even want my wedding to happen here!

Related:  Is the Blue Grotto Really Worth It? 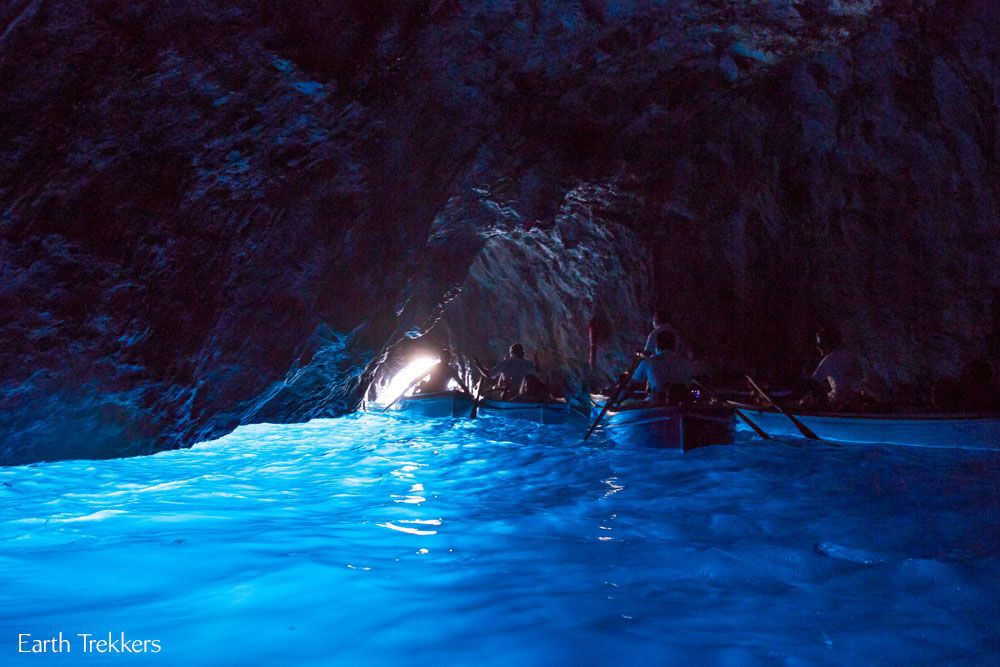 Kara on the statue of David in Florence:

It was bigger than I expected but he looked like any other statue, just much better. Better carved and just much more neat.

Tyler and our market tour in Florence:

Once we were done shopping in the leather market, we went to find some food for a picnic lunch. While we were searching for food, we came across this display of cow parts. The guy told us what each part of the cow was. They had the nose, tongue, testicles, penis, four stomachs, feet, and the Achilles tendons. We didn’t get any though, since we all decided it was gross.

Now we are in Africa. Our second day in Botswana we ate dinner at a restaurant overlooking the Chobe River. This is where we saw herds of elephants for the first time and learned how bold and aggressive the monkeys can be.

Kara:  From here you could see elephants. It was SO neat! Also, there were monkeys where we were eating! One was licking salsa out of a can! One actually stole the apple in Dad’s drink and hid under the table and ate it! There were about four of them running around. It was amazing, awesome, and crazy! Sadly, we had to go back to our hotel. Well, welcome to Botswana! 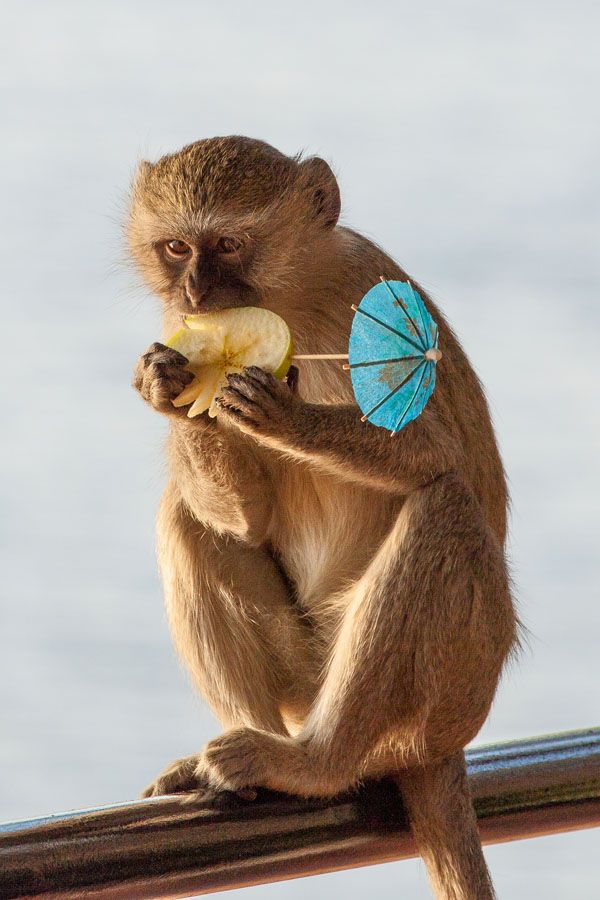 The very next day we began our camping safari in Chobe National Park.

Kara:   YAY! Today we’re going on our first safari! First we get on a boat and go see elephants. When we get there, there were so many elephants! They were all waving their trunks around and eating grass! But we also saw crocodiles, hippos, buffalos, birds, and water bucks. After lunch we got in a safari truck and saw cooler animals. Animals such as giraffes, monkeys, baboons, impala (which is like a deer), and zebras. Also more elephants, hippos, and buffalos. I said, “Why are we getting so lucky with this!” because we even saw a leopard and lions! The lions were only female and adorable cubs! SO CUTE! 😛

Eventually we took the jeep to the camp site where we’ll be sleeping. First time camping! Here, there is a watering hole where you can see elephants. I actually saw a zebra! Mom, Dad, and Tyler didn’t believe me. The food at the camp site was surprisingly good! We had rice and chicken and weird French fries. After eating we went back to the tent and went to bed. 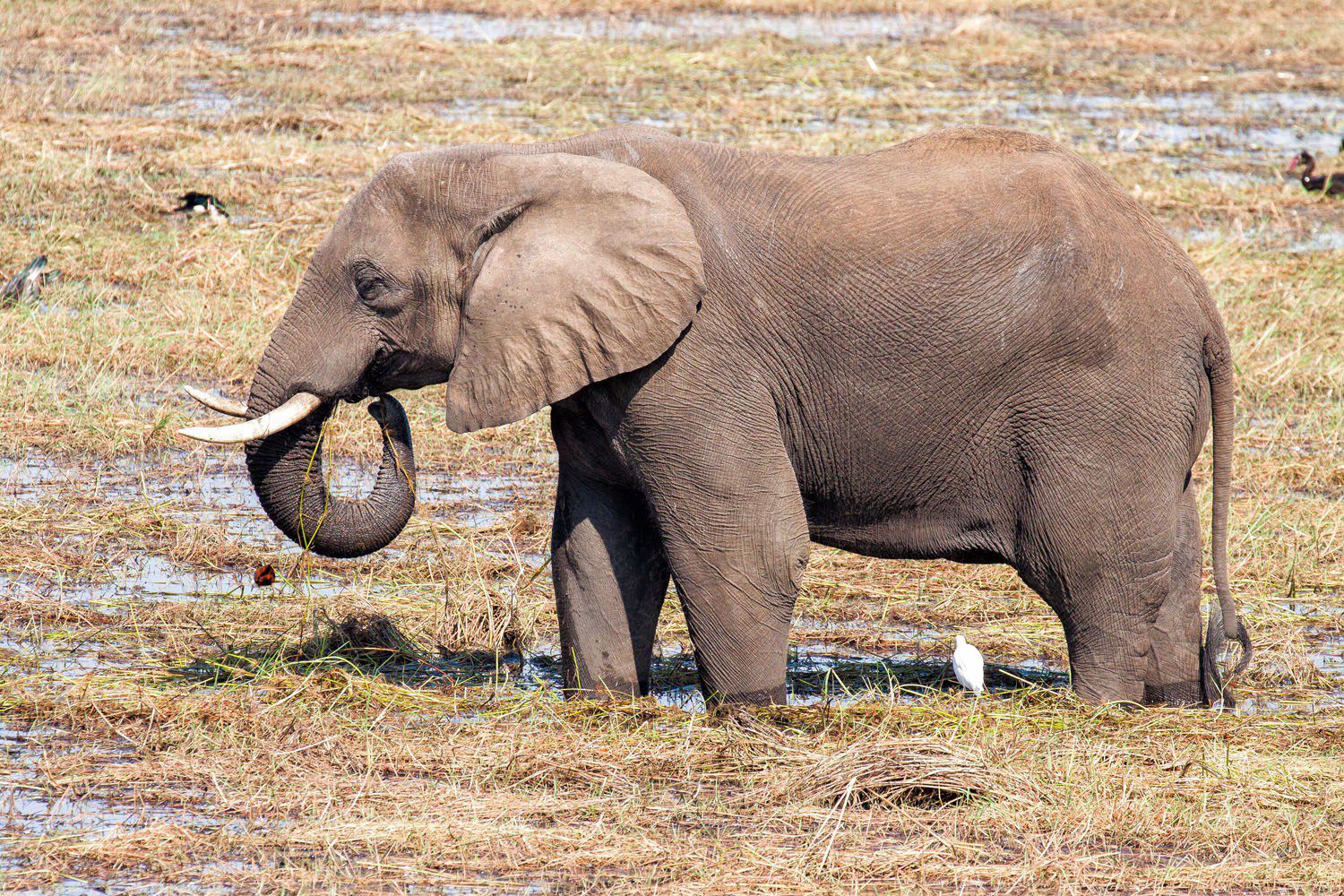 After the camping safari, we spent two nights at Senyati Safari Camp in Botswana. Here they have a bar/restaurant/viewing area overlooking a watering hole with an almost constant supply of elephants.

Tyler:  Today we woke up late in the morning for a chill day at Senyati. I woke up to the sound of birds chirping and singing. Later… Homeschool was long and boring. I was learning about radioactivity in elements. While I was working, elephants walked over to the watering hole right in front of us. They were splashing, pooping, and having a good time. I could smell the stench of their poop and hear their screeches. It was amazing. 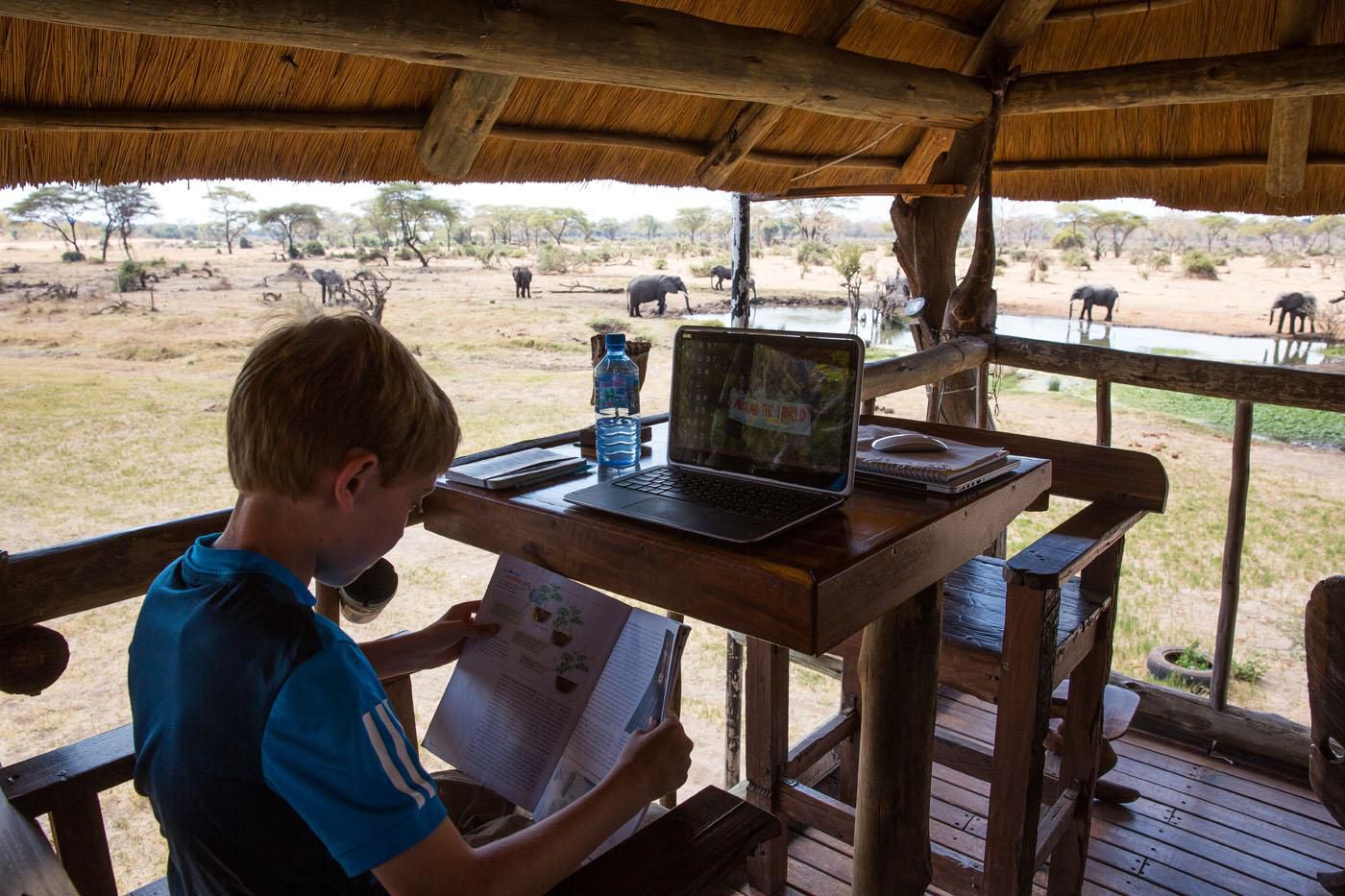 We did a lot of driving while in Africa. Tyler and Kara hated our long car days, especially those days when we had a border crossing.

Kara:  Today is a worse day than yesterday. We have an 8 hour car ride again! Plus customs and homeschool! Nothing could be worse! In the car ride, I mostly do homeschool. Once we get to the hotel Mom has to go over it with me. My brain feels like it’s going to explode! Don’t worry though, it didn’t.

August 22 was an important day in Earth Trekker history. This is the day when we became a party of 5.

I want to get a stuffed animal and I find the perfect one! It’s a small, totally cute lion. I name it Simba. 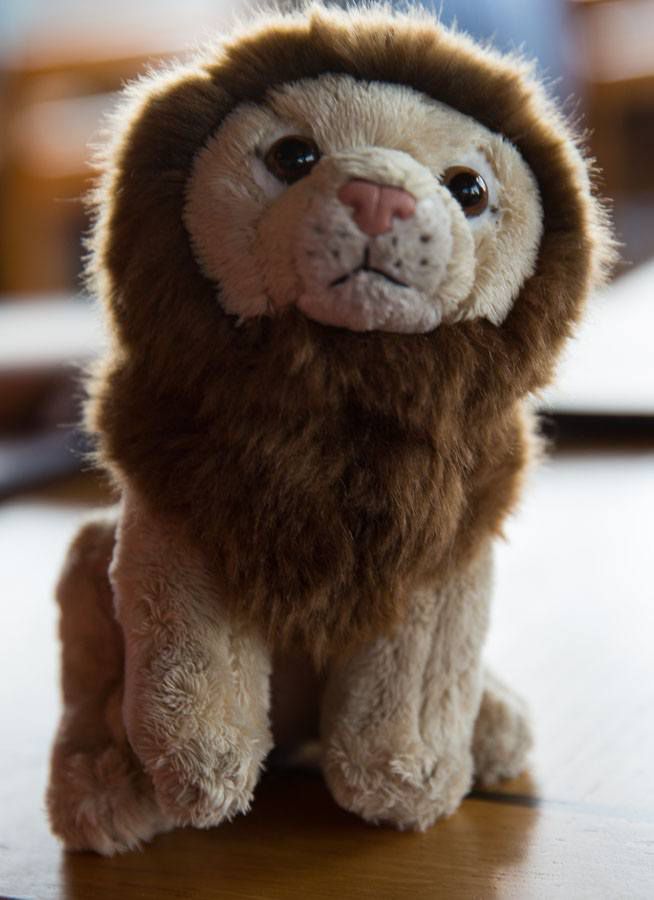 In Kruger National Park, Tyler, Tim, and I went on a morning game drive in the search of lions. We hit the jackpot!

Tyler:  We were driving five feet behind lions! They didn’t seem to care that we were there! Wow, it was so awesome! Also, I saw tons of hyena and I saw a baboon playing with his penis!

In St. Lucia, after swimming at the beach, we went back to our car to change our clothes. Monkeys climbed into our car and stole our food. It was hilarious. Plus, Kara loved it, because they stole our bread so we couldn’t make sandwiches. Kara does not like sandwiches.

Kara:  We went back to the car and got back into our regular clothes. When it was my turn a monkey came into the car and stole a banana. Then another monkey came and took our 6 rolls! Looks like we’ll have ham and cheese for lunch! Thank you monkey burglars!

Today is my birthday! WOOHOO! I was so excited and today we are going to Addo Elephant Park. We saw warthogs, two leopard turtles, a lot of zebras, a buffalo, and two elephants that were so close to us! One went right next to our car! Then we saw a lion a little later on. There were actually two or three but I only saw one. Almost the whole time I stuck my head out of the window. It was a fun birthday! 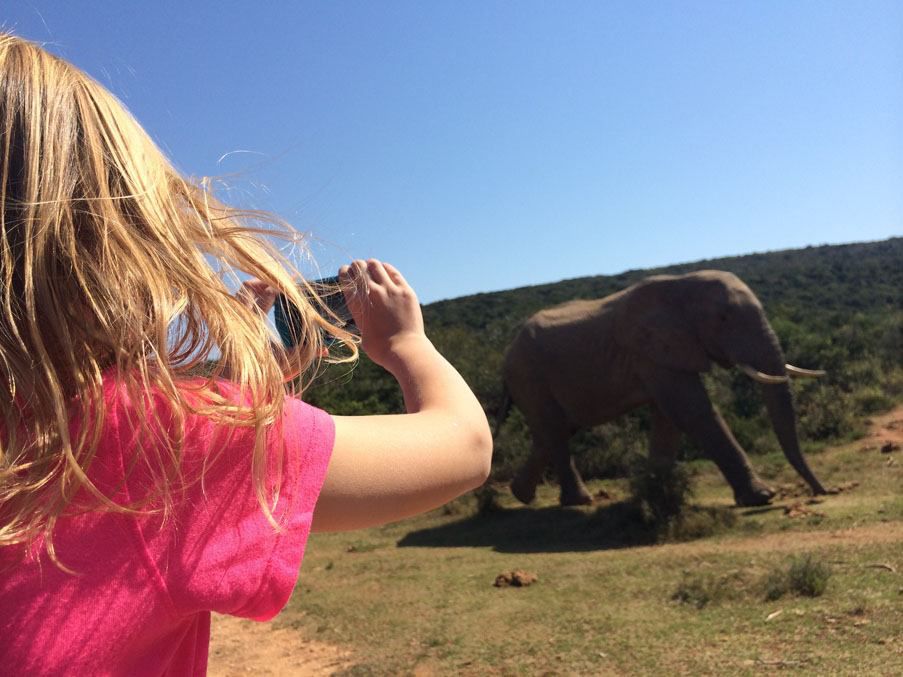 Feeding African elephants was one of our favorite experiences.

Kara:  Today we fed and touched elephants which was really amazing! First we fed them and their trunks were like vacuum cleaners! They would suck the fruit into their trunks and put it in their mouth! That was cool! Their skin was super hard and more hairy then you might expect. Don’t worry, they didn’t stomp on us! 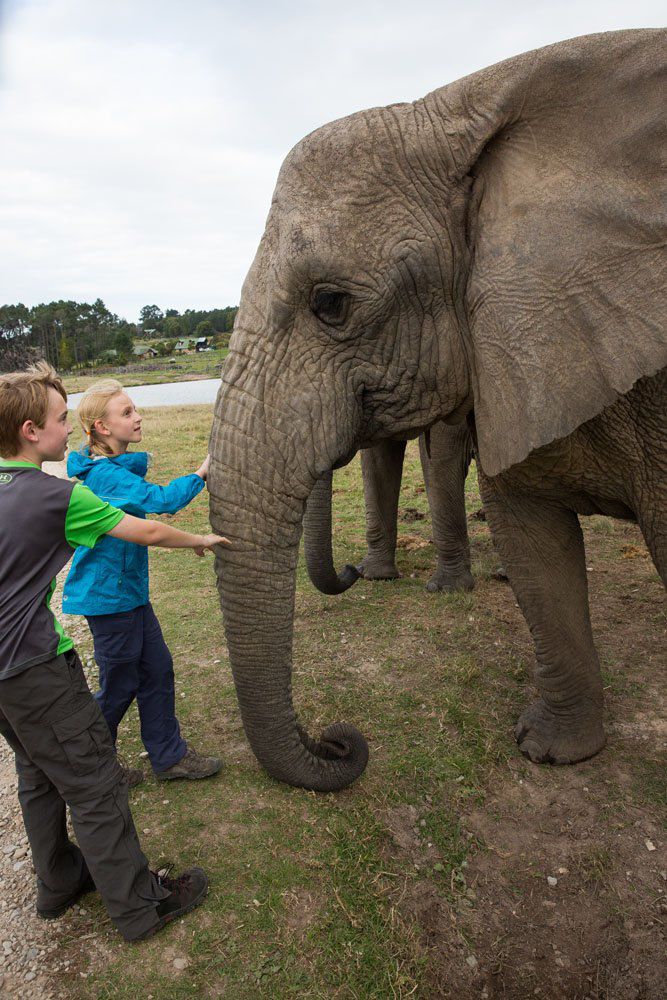 Kara was standing too close to an enclosure housing Maribou Storks. These are giant, ugly birds that look a lot like a vulture.

Kara:  We were sitting, waiting for Mom, and there were Maribou Storks nearby. They are on the Ugly 5 list. It’s a big, ugly bird that can’t fly and is not an ostrich. The ugly bird came over and poked its beak through the railing and bit me! Later on, everyone said it was funny but it’s still not funny for me. I hated it!

Related:  14 Reasons Why You Should Visit South Africa

Riding ostriches in Oudtshoorn was hilarious!

Tyler:  Our next stop was riding ostriches. The ride was really quick and bumpy, but it was really fun! Dad actually fell off! After that we did a “neck massage,” where we held a bucket of food and the ostriches ate it and it looked really freaky. I didn’t do it though. 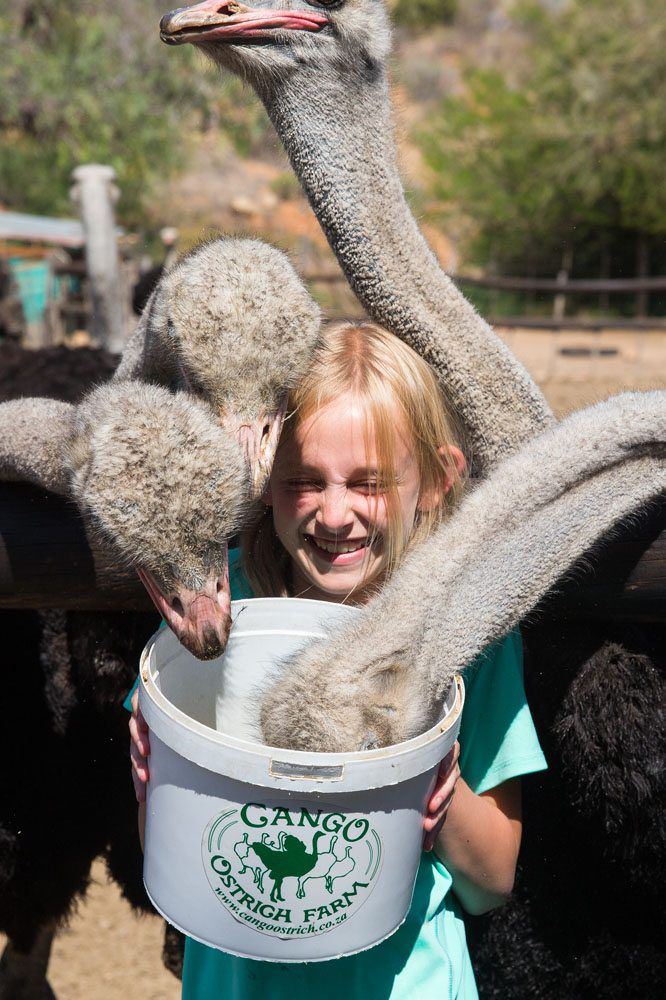 Today is one of the best days we had because today we went Shark Cage Diving! From the boat they would fling out the bait, fish heads on a rope, into the water to attract the sharks. We could see the fin sticking out of the water sometimes. I went in the water, which was 62° F but I had a wetsuit on so it wasn’t that bad. A shark came and that made me a little scared. The shark was right in front of me! Once, it banged against the cage. Our tour guide said we saw four sharks today. Wow! 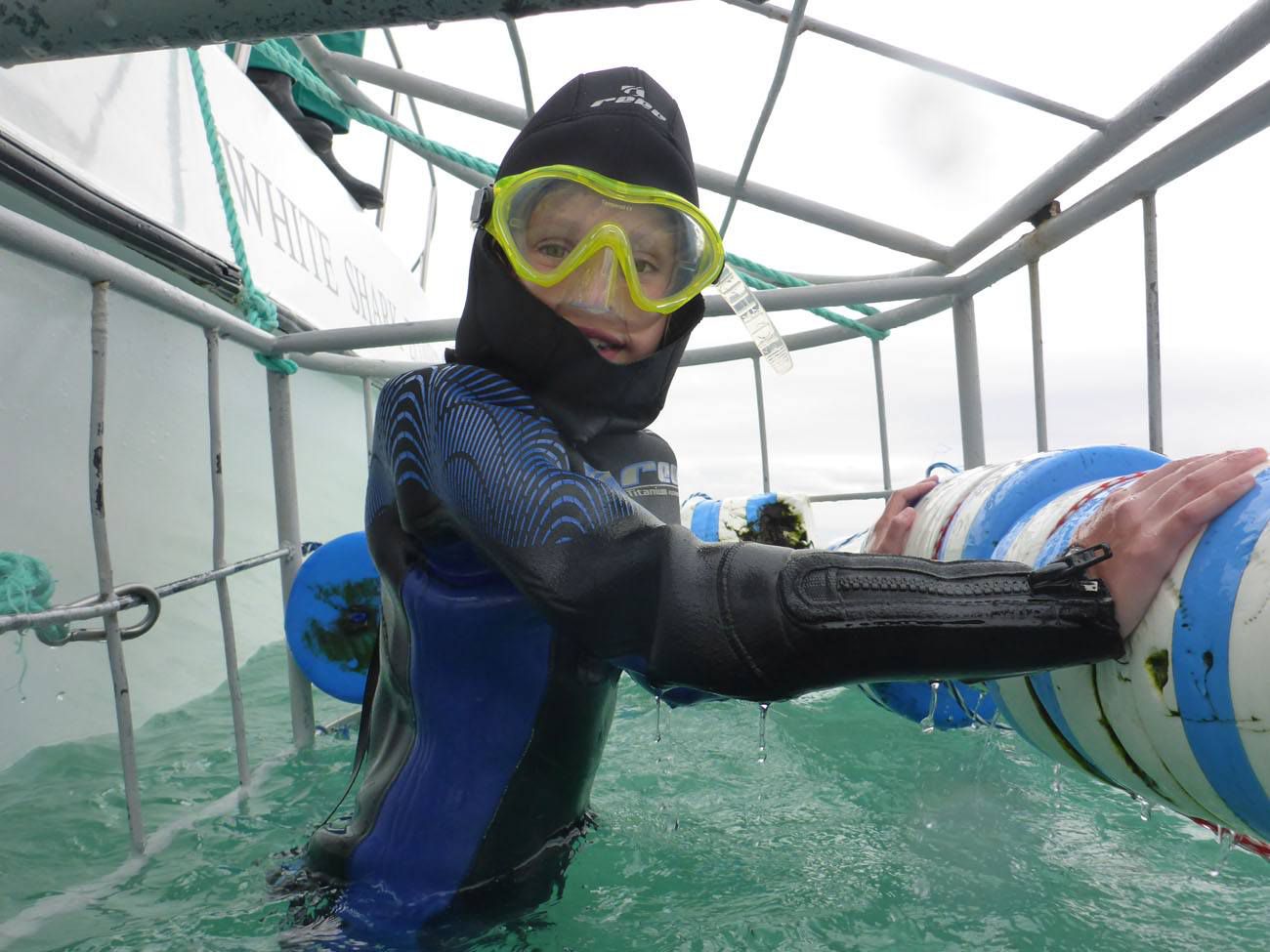 I hope you liked reading what Tyler and Kara have to say. Do you have a favorite quote? Would you like to read more what they wrote during our travels? Leave a comment below! 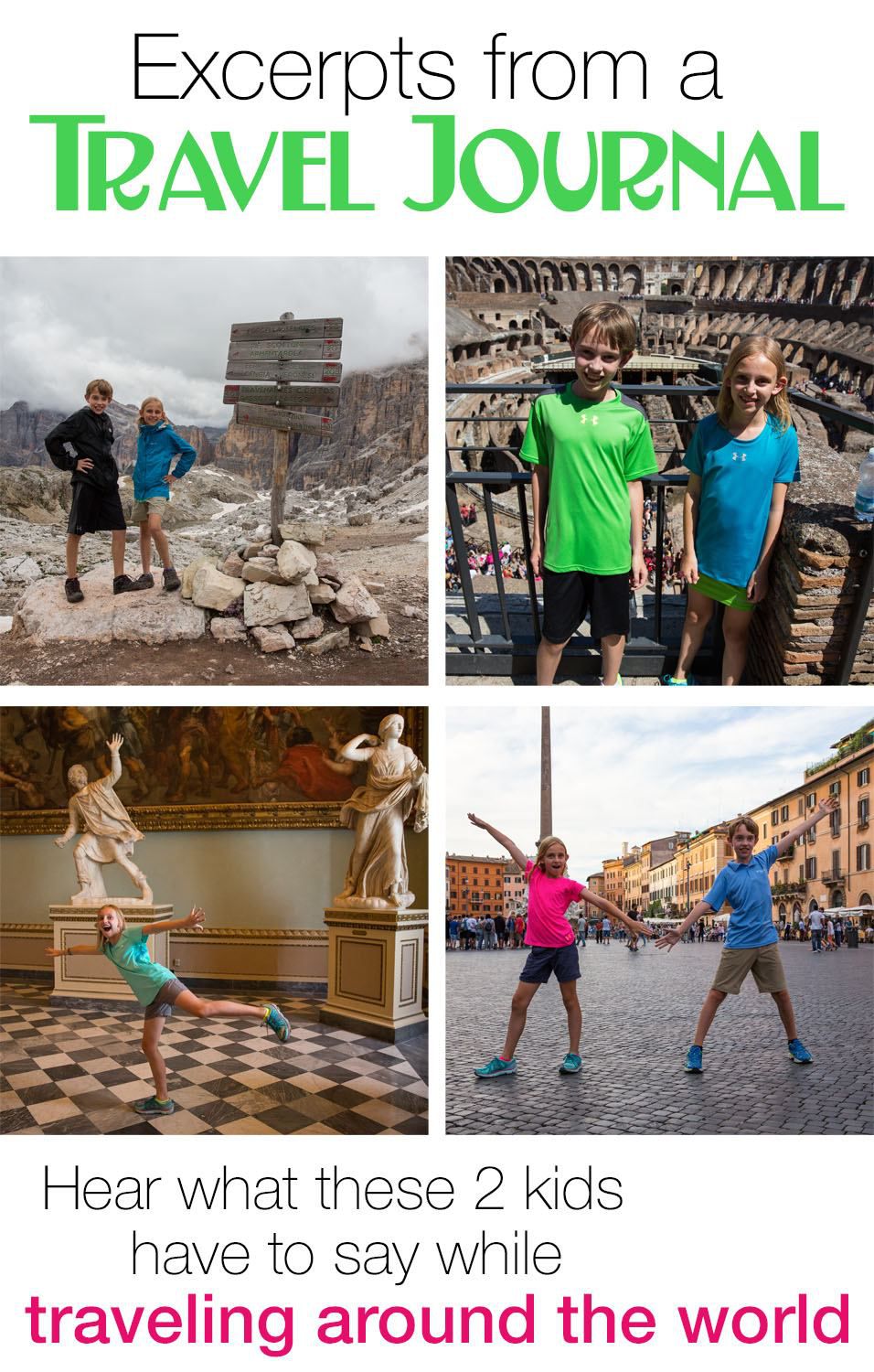