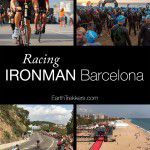 Tim and I have been competing in triathlon races for years. The farthest we ventured from home was Florida, competing in Ironman Florida in 2009 (Julie) and 2010 (Tim). Both of us have dreamed about racing in Europe. But it seems so far to travel, just for a triathlon. In the summer of 2015, Tim expressed interest in racing Ironman Barcelona. I agreed, Tim paid his entry fee, and then he began the journey of training for an Ironman.

Here is our experience traveling to Spain to race Ironman Barcelona in 2016.

Ironman Barcelona takes place at the end of October. The race is actually not in Barcelona. It is in Calella, Spain, a small town on the Mediterranean Sea 60 km northeast of Barcelona.

Tim and I arrived in Barcelona one week before the race. We spent several days touring Barcelona and taking day trips to Montserrat and Girona. As it got closer to race day, Tim had to stop indulging on tapas and wine, not an easy thing to do when you are in Barcelona.

For one week, tiny Calella is filled with triathletes and their friends and family. We arrived on Friday, two days before the race, in order to maximize our time in Barcelona. Tim had two days to prepare for the race…going to the race briefings, organizing and dropping off his race gear, doing a practice swim and a practice bike, and shopping in the Ironman store. 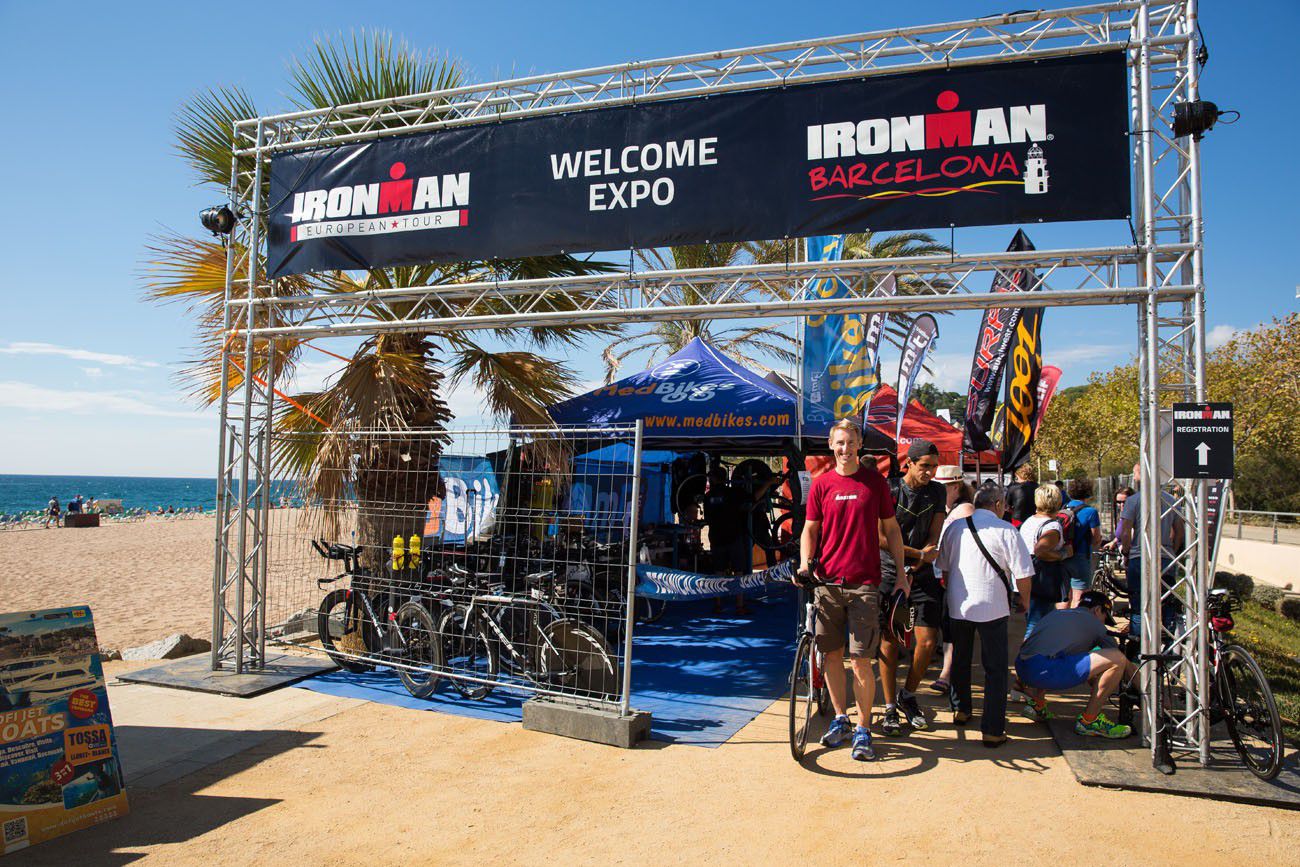 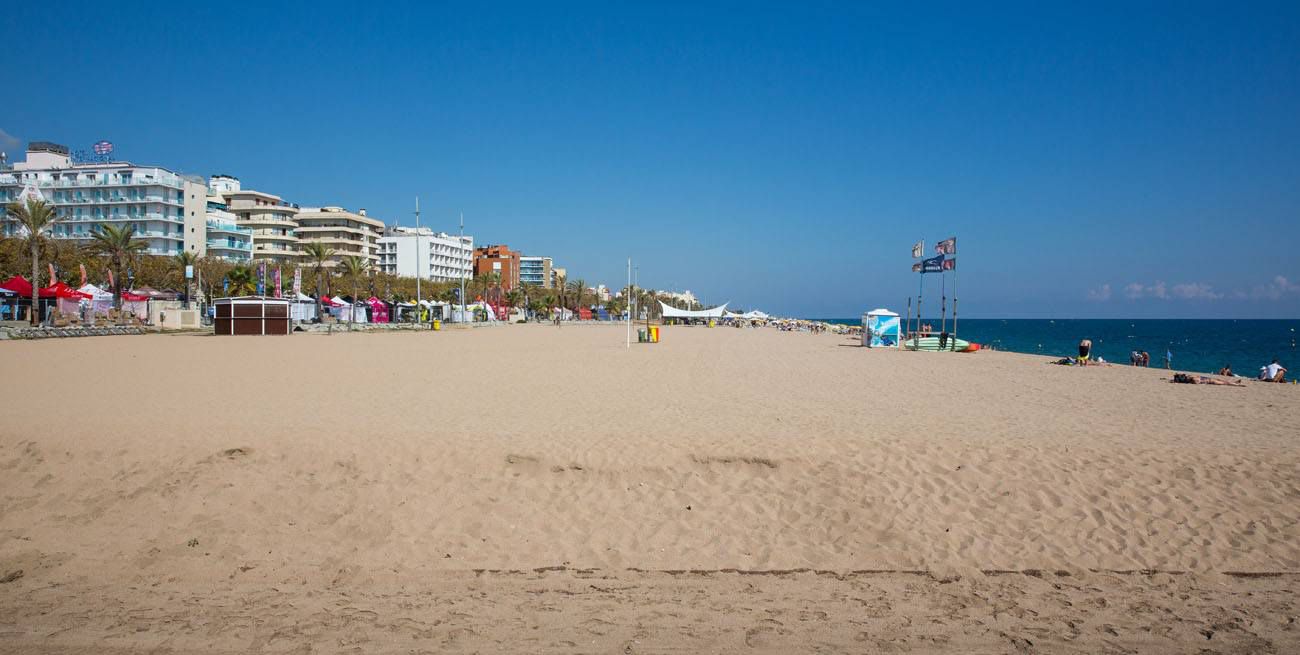 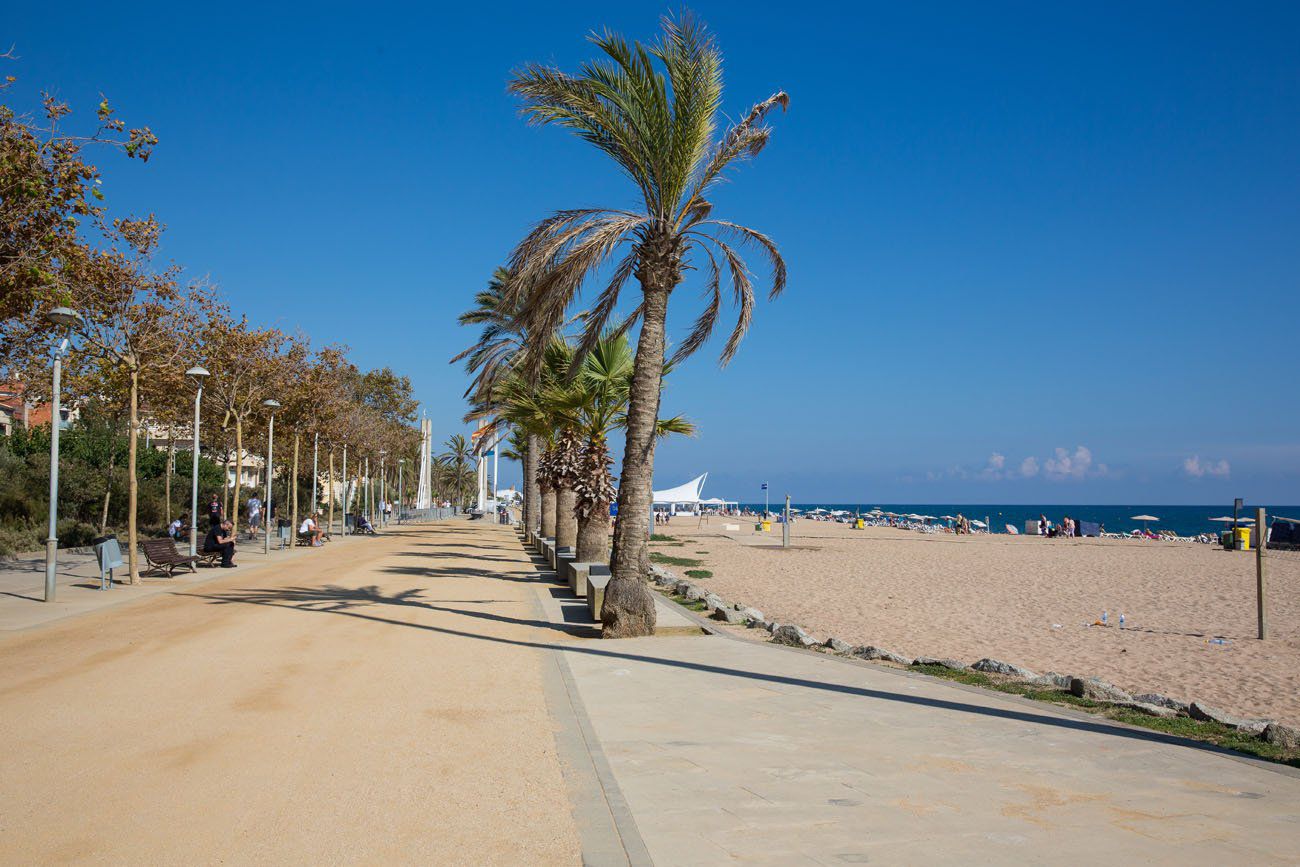 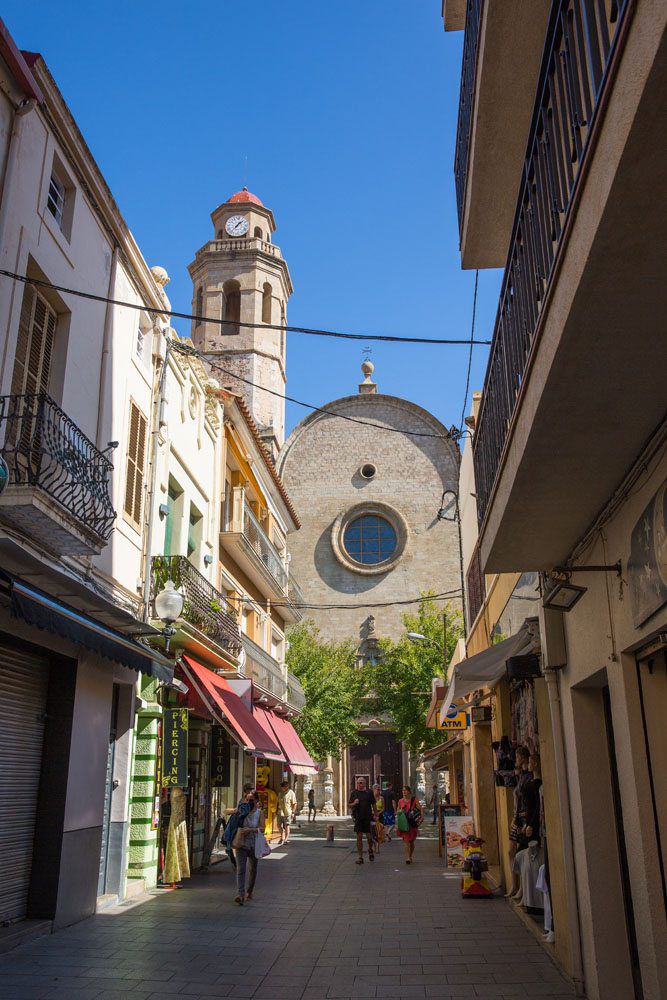 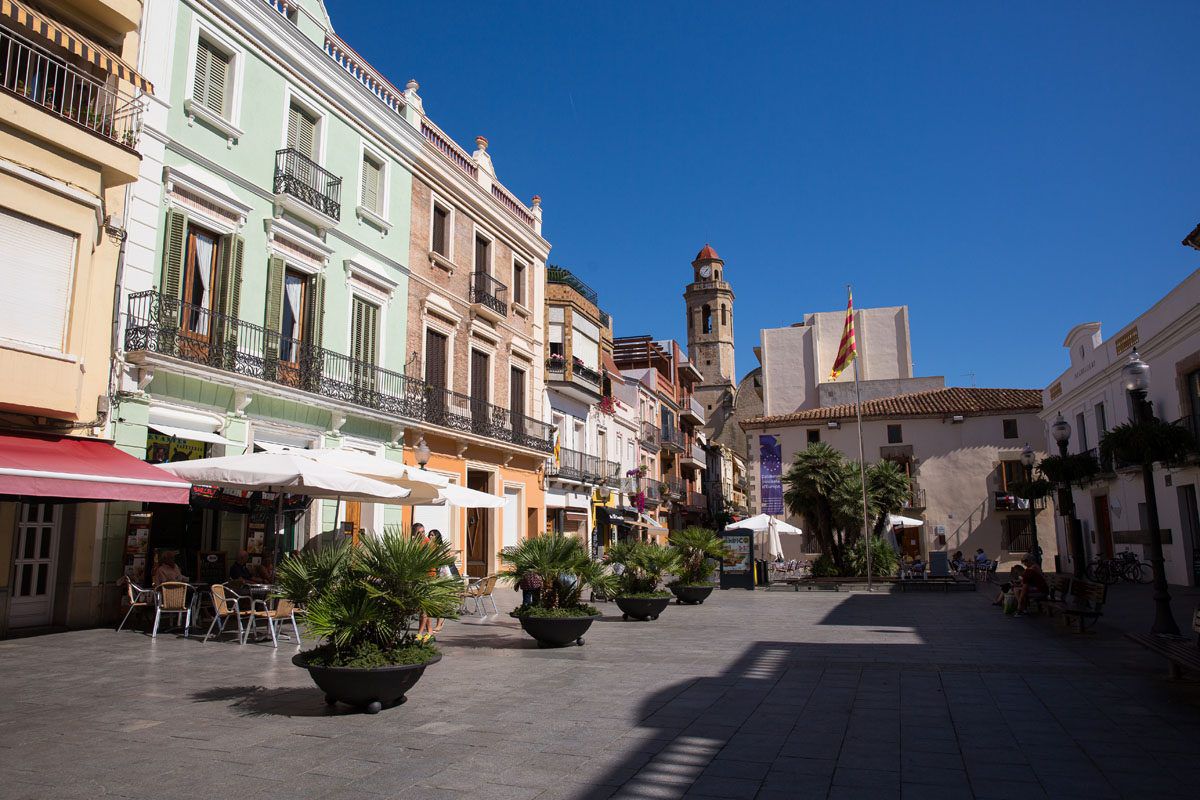 Food Poisoning the Day Before the Race

Now that we were just hours away from the race, Tim and I became much more cautious with what we ate. The last thing you want before a big race is food poisoning.

And that’s exactly what happened.

Tim and I ate at a small Italian restaurant that got very good reviews on Trip Advisor. Tim ate pasta and I ate margherita pizza. Tim had just a slice of my pizza.

We both awoke the next morning, nauseous with diarrhea. We are certain that the pizza was the culprit. Fortunately, Tim was better in just a few hours. I spent the day in bed, sick, exhausted, trying not to throw up. I have had terrible luck this year, getting sick our first night in Israel back in April.

I was very concerned that the food poisoning would negatively impact Tim’s race. In 24 hours he’d be swimming, biking, and running 140.6 miles and to be sick the day before is terrible luck.

For dinner, not risking the restaurants in Calella, Tim dined on peanut butter and jelly sandwiches and fruit.

Ironman Barcelona starts at 8:30 am. That’s a late start in the world of triathlon racing. This time of year, the sun does not rise until almost 8 am. You can’t have thousands of triathletes swimming in darkness!

Therefore, we got to “sleep in.” We made our way down to transition at 7 am, where Tim finalized his race day preparations.

Despite the food poisoning the day before, Tim felt confident that he would have a great race. He dreamed about this moment all year. Those moments before an Ironman swim start are filled with nervousness, excitement, and anticipation. All of your training is behind you…now is your chance to really test yourself.

I met Tim on the beach, prior to the swim start. It was a beautiful morning…sunny, warm, with a light breeze. Water conditions today were much calmer than during Tim’s practice swim two days ago. 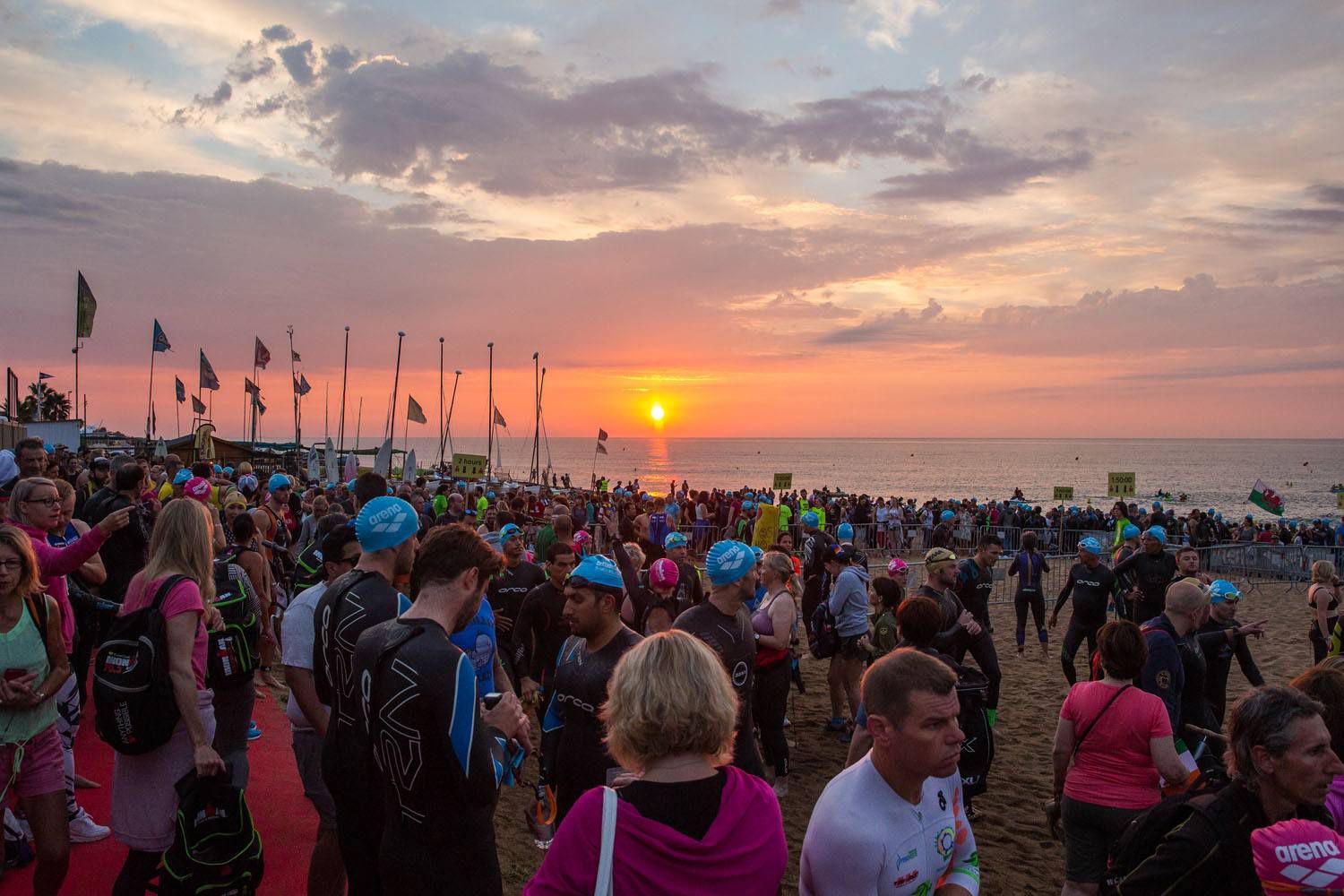 The mood on the beach was upbeat and full of anticipation. There’s lots of motivational music with announcers speaking in Spanish and English. It’s hard to stand on that beach with the racers and not wish you were competing.

Ironman Barcelona has a rolling swim start. You join the corral with your estimated swim time. Tim joined the 1:20 crowd even though he expected that he would swim faster. Tim said he would rather swim past people than get swum over. It’s not fun. 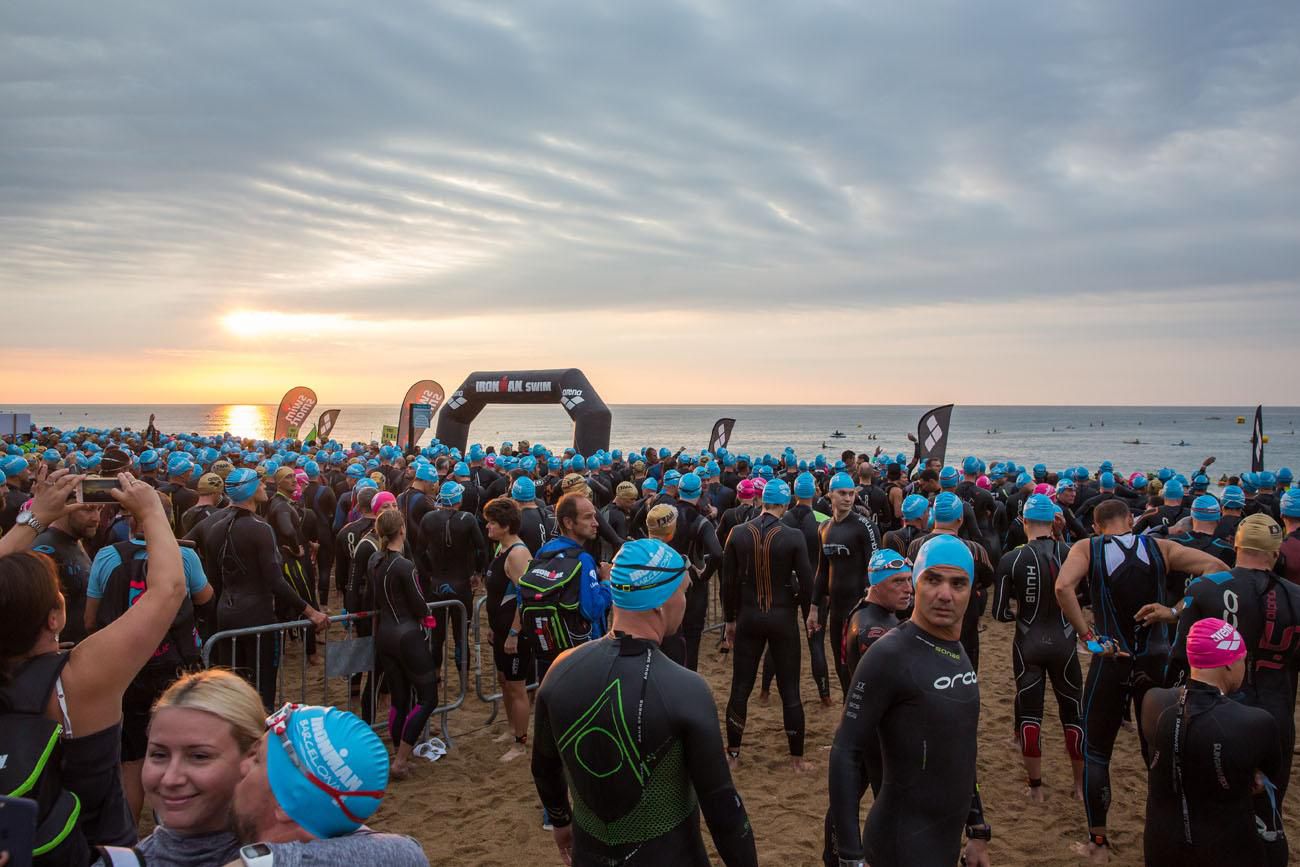 The swim is one loop in the Mediterranean Sea. Triathletes swim out and back along the shoreline, ending back at T1.

Tim loved the swim and said it was his favorite of any race. What’s not to love?!! It’s hard to beat swimming in the clear water of the Mediterranean. 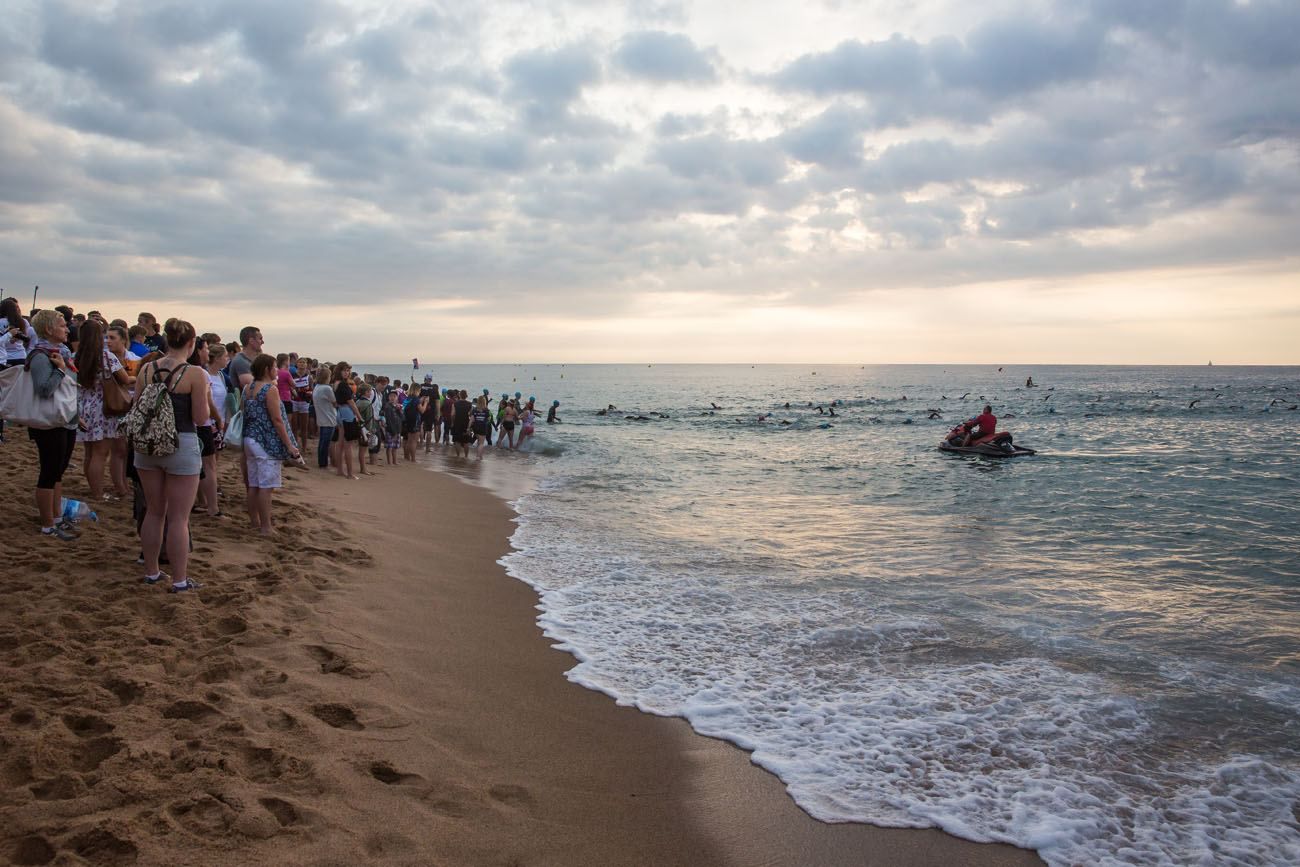 Trying to maneuver around a slower racer, Tim banged his left foot on a metal fence and would end up breaking a toe. He would spend the next 112 miles on the bike wondering how his foot would hold up on the run.

The bike course is two loops. From Calella, competitors cycle along the coast towards Barcelona. The course is fast and the road is in excellent condition. It is a relatively flat route although there are some rolling hills. There is a section where the course heads inland to Argentona and up into the hills. This does add some climbing to the bike course but it does not last long. 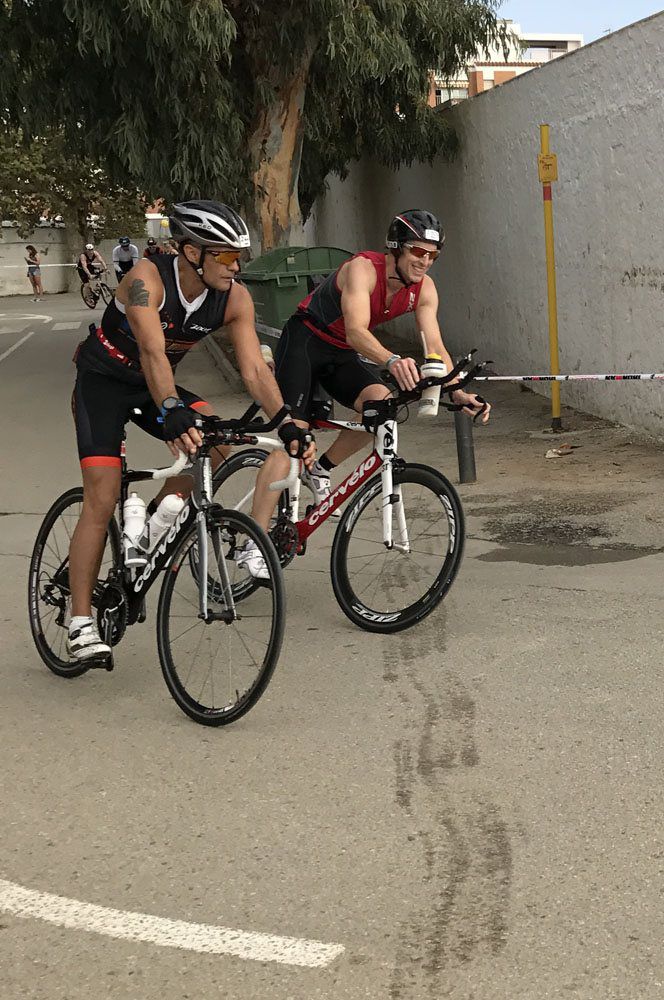 Racers turn around and start the second bike loop at the round-about on N-11 in Calella. This is a great place for spectating the race. This stretch of road is lined with cheering friends and family members. It’s a beautiful spot and from here you can look down to the finish line on the beach, a place that is just hours from becoming one of the biggest party spots on the planet. 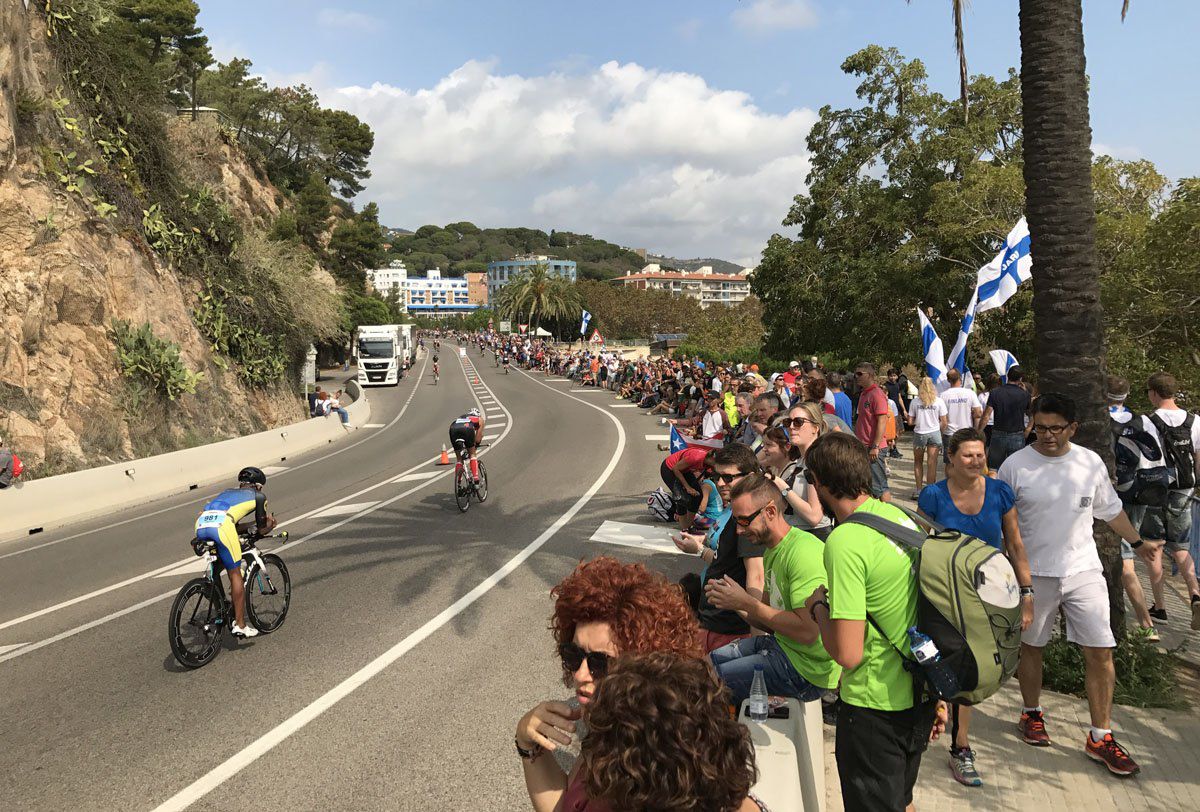 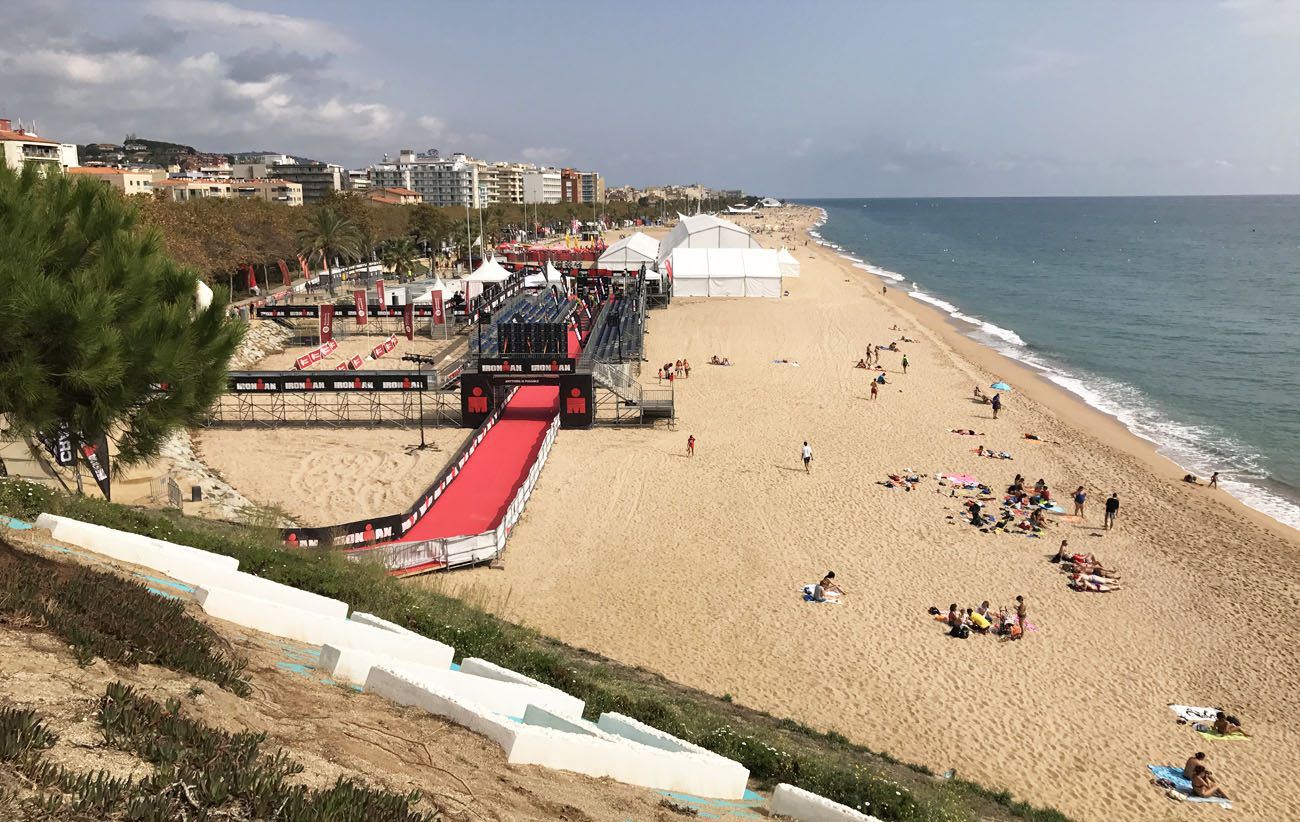 When I saw Tim, he was happy and smiling. He was having an awesome race.

The run course is three loops through the town of Calella. This is also excellent for spectators. I saw Tim seven times on the run! Like most racers, he started off full of smiles, but as the miles ticked away, real fatigue sets in and the race gets really hard. It’s in those final 10 miles that you really push your limits and find out what you are made of. 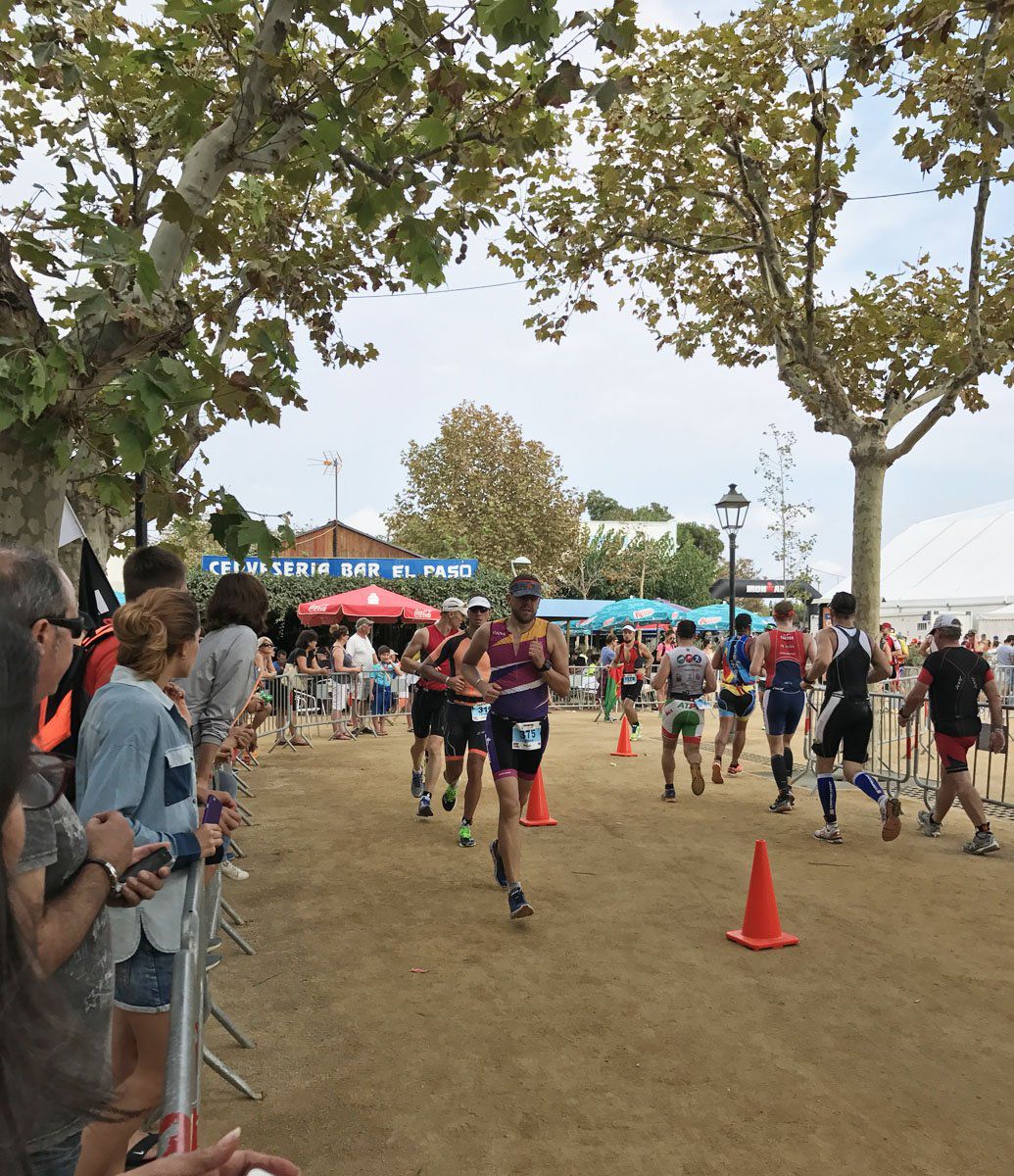 Tim’s goal was to break 12 hours. Keep in mind that Tim took two years off of training before signing up for Ironman Barcelona. For the past year he balanced a busy, full time work schedule, several international trips, and life as a father to two teenagers, with triathlon training. His daily schedule is packed. In one year, Tim trained his body back into Ironman shape, just in time for Barcelona. Throw in a mild bout of pre-race day food poisoning and a broken foot just to keep things interesting.

Tim honestly looked exhausted and miserable at the start of his final loop. He was slowing down at this point, not at all unusual. But he did an amazing thing. Even when he wanted to stop to walk, Tim somehow sped up, just a little bit. This was exactly what he needed to do to break that 12-hour goal.

We’ve done a lot of races. Tim even competed in the one and only inaugural Ironman NYC. We have never seen a finish line like this. 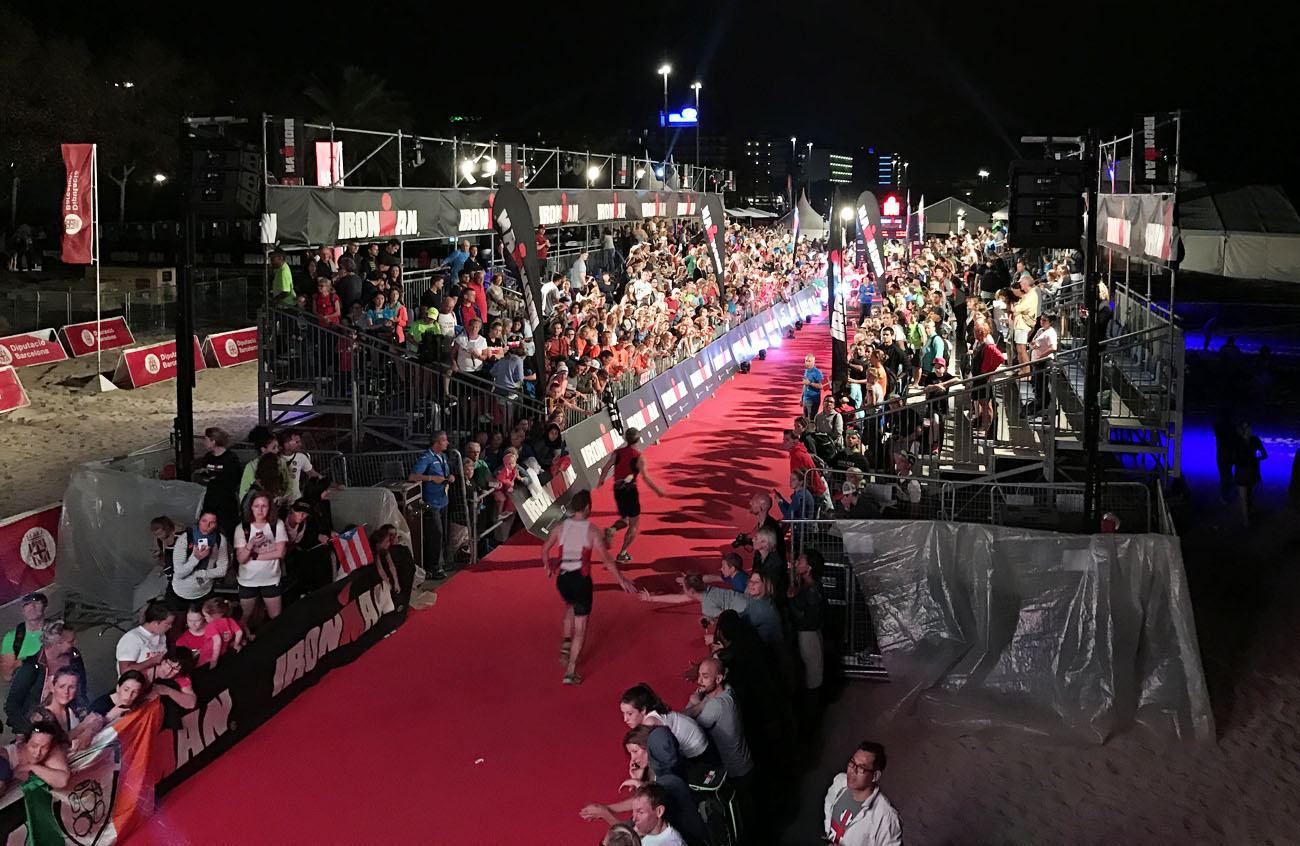 There is so much energy here. It really is amazing and incredibly inspirational. The music is loud, the crowds are louder. Spotlights are illuminating the finish line and the sky over Calella. The finish chute is long and lined with spectators. It is exhilarating watching triathletes run down this chute, taking their final, exhausted steps to the finish line. I can only imagine what it is like to actually be one of them.

Just over an hour ago, I saw Tim, exhausted and miserable. The energy of the finish line rejuvenated him. He was happy and smiling again and looked as if he still had miles to go. Tim enjoyed every final step of Ironman Barcelona. I was thrilled for him…what an accomplishment. 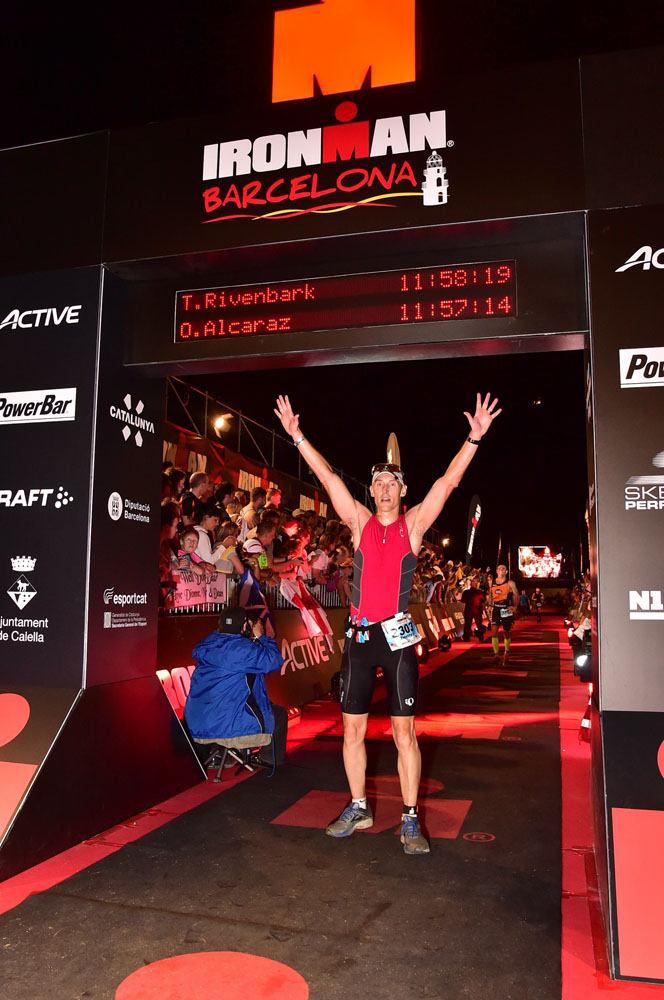 This is a great race. It’s a fast, flat course in a gorgeous setting. Swim in the Mediterranean, cycle along the coastline past palm trees and small, Spanish towns, then run through Calella, with tons of crowd support. There is only one transition area and the finish line is amazing. Ironman puts on an excellent race here.

Ironman Barcelona is a large race, with 3000 competitors, making it one of the largest on the Ironman circuit. Because of the large numbers of competitors, there are numerous reports of drafting on the bike course. 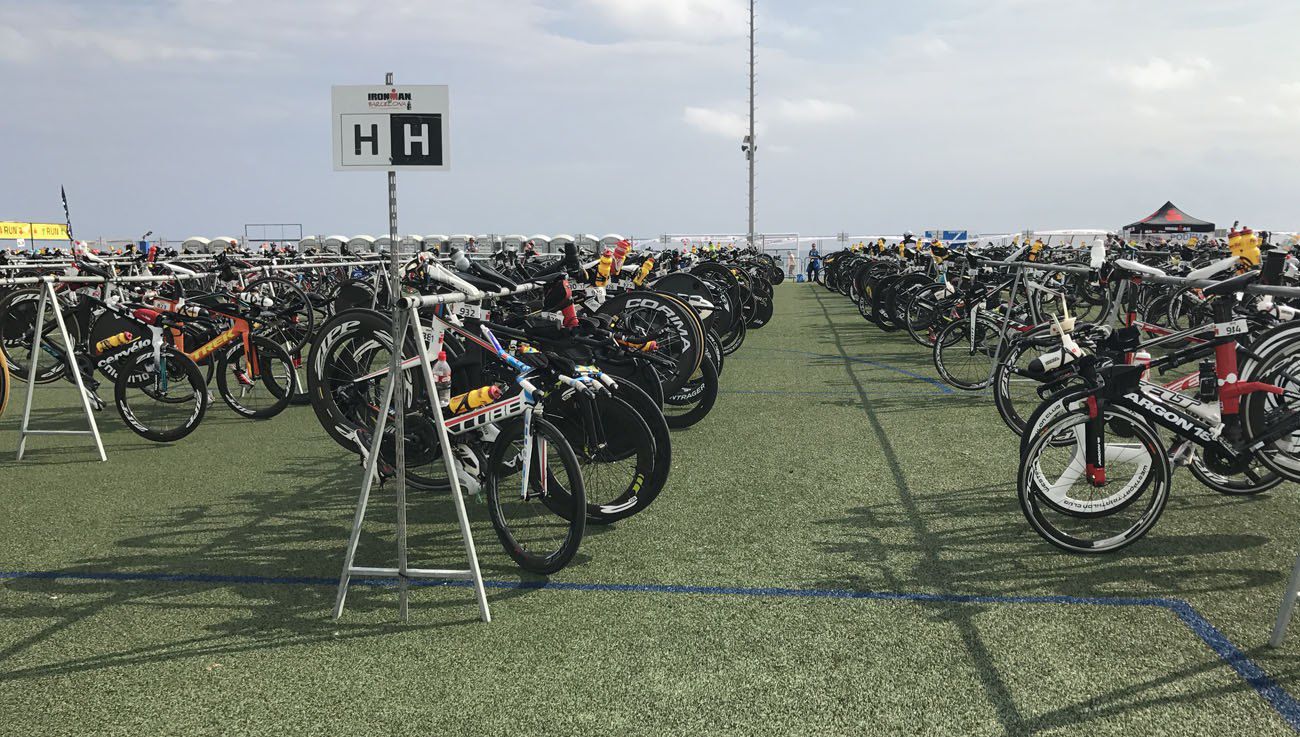 What was it Like Traveling to Europe for an Ironman race?

Awesome. And easier than we expected it to be.

Yes, it is more difficult traveling from the US to Europe with a bike and triathlon gear, versus a destination in our home country.

The biggest “headache” was the bike. Tim had a local bike shop dismantle his bike and pack it into a bike box, which he rented. Tim checked this bike box on our United flight to Barcelona. Dragging the bike box through the airport and later through Barcelona was not much of an issue. The key is to pack light so you do not have many other bags to deal with.

Once in Calella, Tim unpacked and reassembled his bike. In the Ironman Expo, he paid $25 to have a bike mechanic double check that he did everything properly. After the race, Tim packed his bike into the bike box and checked it on our return flight home.

It does cost more to travel to Europe to race. There are plane tickets to buy and the money required to either box your bike plus airline bike box fees or pay a company to ship your bike for you.

But what you get in return is an awesome destination race and the chance to explore another country.

We stayed at B&B El Pekinaire, a two-star B&B in downtown Calella. This is a great budget accommodation in town. In fact, it was the #1 rated hotel in Calella on Trip Advisor when we stayed there.

El Pekinaire is within walking distance of Transition, the race finish line, and numerous restaurants. We stayed in a triple room with ensuite bathroom. Our room, and the entire hotel, is spotless. We loved the breakfast. They serve the usual European breakfast, with coffee and orange juice, fresh fruit, pastries, cereal, yogurt, cheese, and deli meat. On the morning of the race, breakfast was served early to accommodate the Ironman racers. We highly recommend staying here.

Are you considering racing Ironman Barcelona? For more details on the race, visit Ironman.com.

So, are you planning on racing Ironman Barcelona? Comment below if you have any questions or any advice for our readers.

Are you planning a trip to Spain? Read all of our articles about Spain in our Spain Travel Guide. 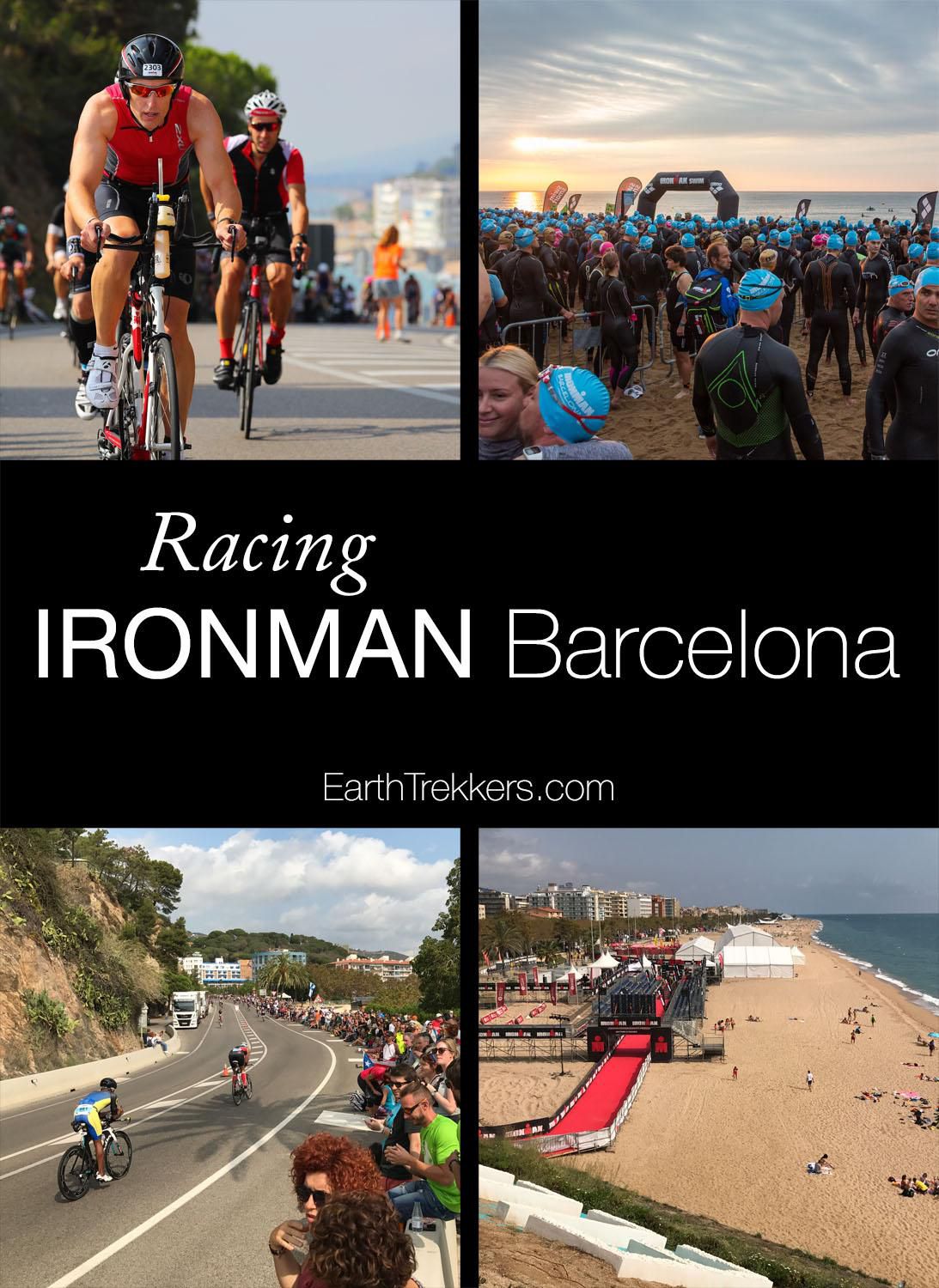