Photographing Stari Most: Where to get the Best Views in Mostar 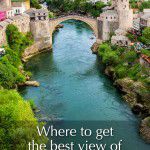 I admit it. I was obsessed with getting the perfect photo of Stari Most (the Old Bridge) in Mostar. This fairytale bridge has been on my photography bucket list ever since I saw photos of it on other travel websites. 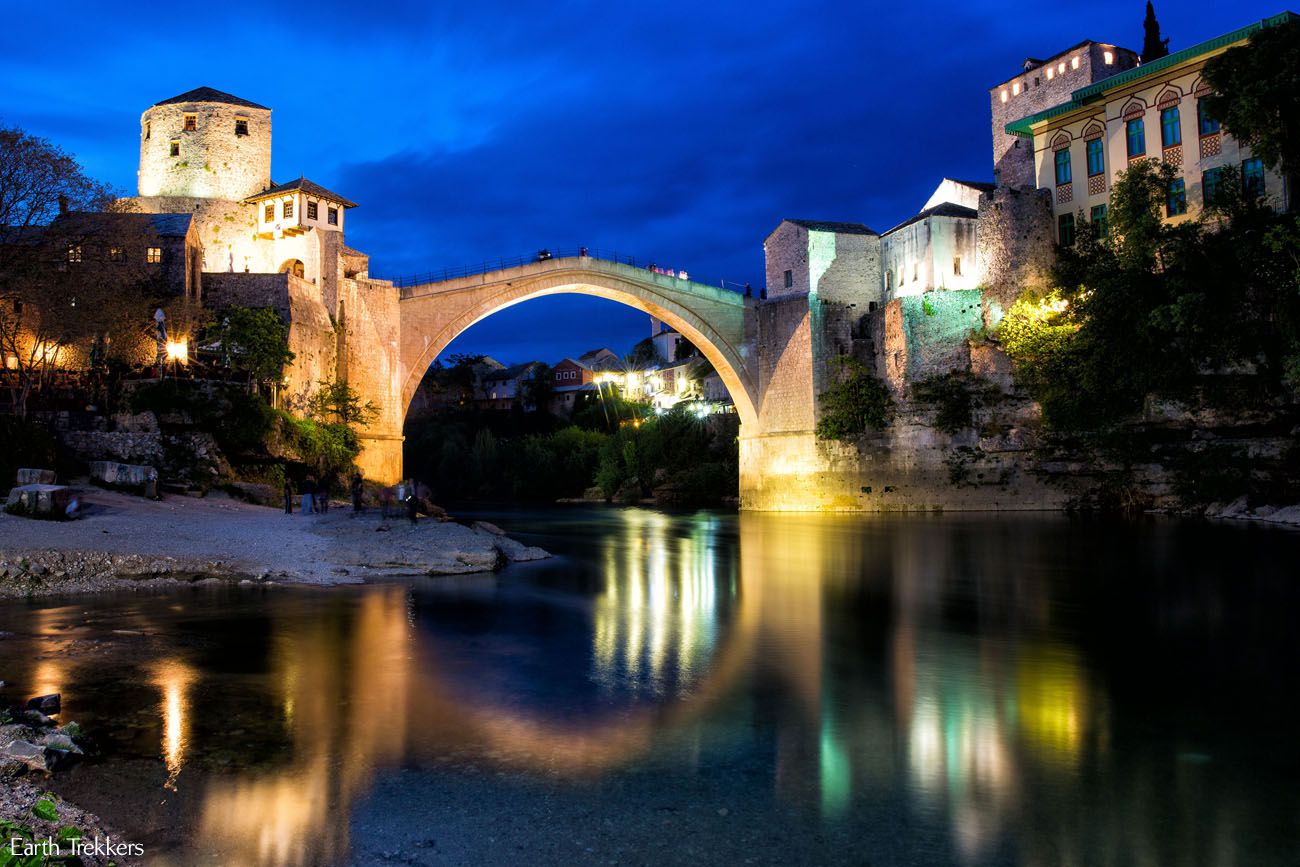 In order to have the best experience, we planned on being in Mostar for 24 hours, visiting the town in transit between Kotor, Montenegro and Sarajevo, Bosnia & Herzegovina. But we also took a quick peek a week earlier, while driving out to Croatia from Sarajevo. Yes, I was like a kid on Christmas…I couldn’t wait to see this bridge!

But before we get to the photos, here’s a little history about Stari Most.

Facts about the Old Bridge

Stari Most was constructed by the Ottomans under the commission of Suleiman the Magnificent in the 16th century. Straddling the Neretva River, this bridge links the two parts of the old town together.

The bridge stood for 427 years until it was destroyed by Croat forces in the Croat-Bosniak War on November 9, 1993. Roughly ten years later the bridge was rebuilt, opening on July 23, 2004.

Diving off the Old Bridge

For hundreds of years, people have been diving off of Stari Most into the Neretva River. It’s a risky jump and people have died attempting this feat.

Members of the Stari Most diving club stand on the bridge, taking donations from tourists. Once they get 25 euros, they make the leap from the bridge. We saw several of these men diving into the river during our visit.

Making the leap, at least one time, is a right of passage for many of the men who live in Mostar.

Tourists are permitted to jump from the bridge. First, you must get approval from the diving club. Then you take a practice jump from a lower bridge before making the final leap from Stari Most.

RELATED: How to Plan the Perfect Visit to Mostar

Stari Most in Photos

Here are six places to get the best views of Stari Most.

On the West Bank of the Neretva River

This is the most popular spot to photograph the bridge. There are two different places here that offer a slightly different angle, what I am calling “the beach” and “the steps.” 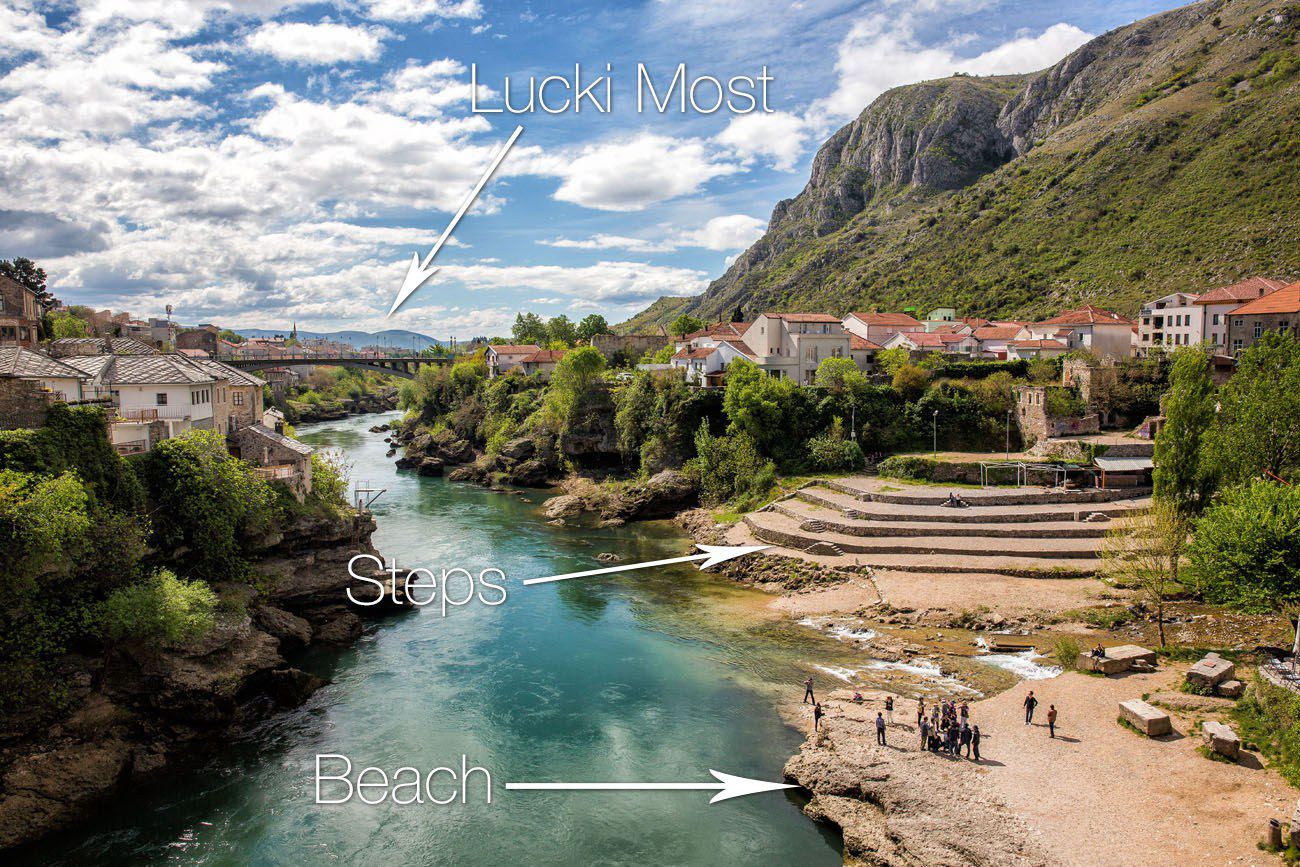 “The Beach:” For the spot closest to the bridge, walk down the cobblestone path and steps near Ascinica NAR, a café near the banks of the river. 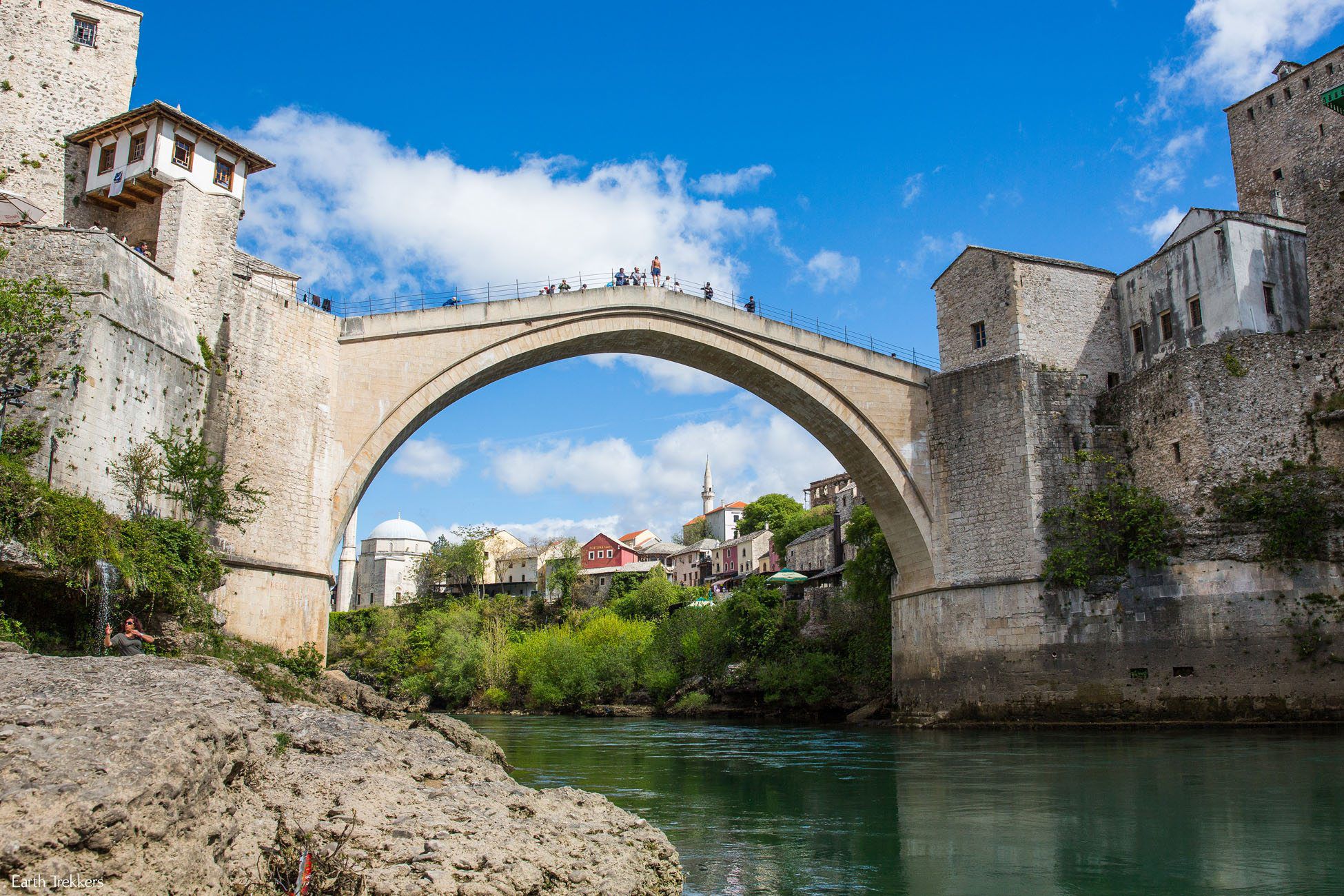 “The Steps:” The second spot is just a short distance away, separated from the beach by a stream. To get here, walk back into the old town, head away from the bridge, turn left at Hindin Han, then turn left again to walk out towards the river. Even though it’s just a little farther from the bridge, I think the view here is better. 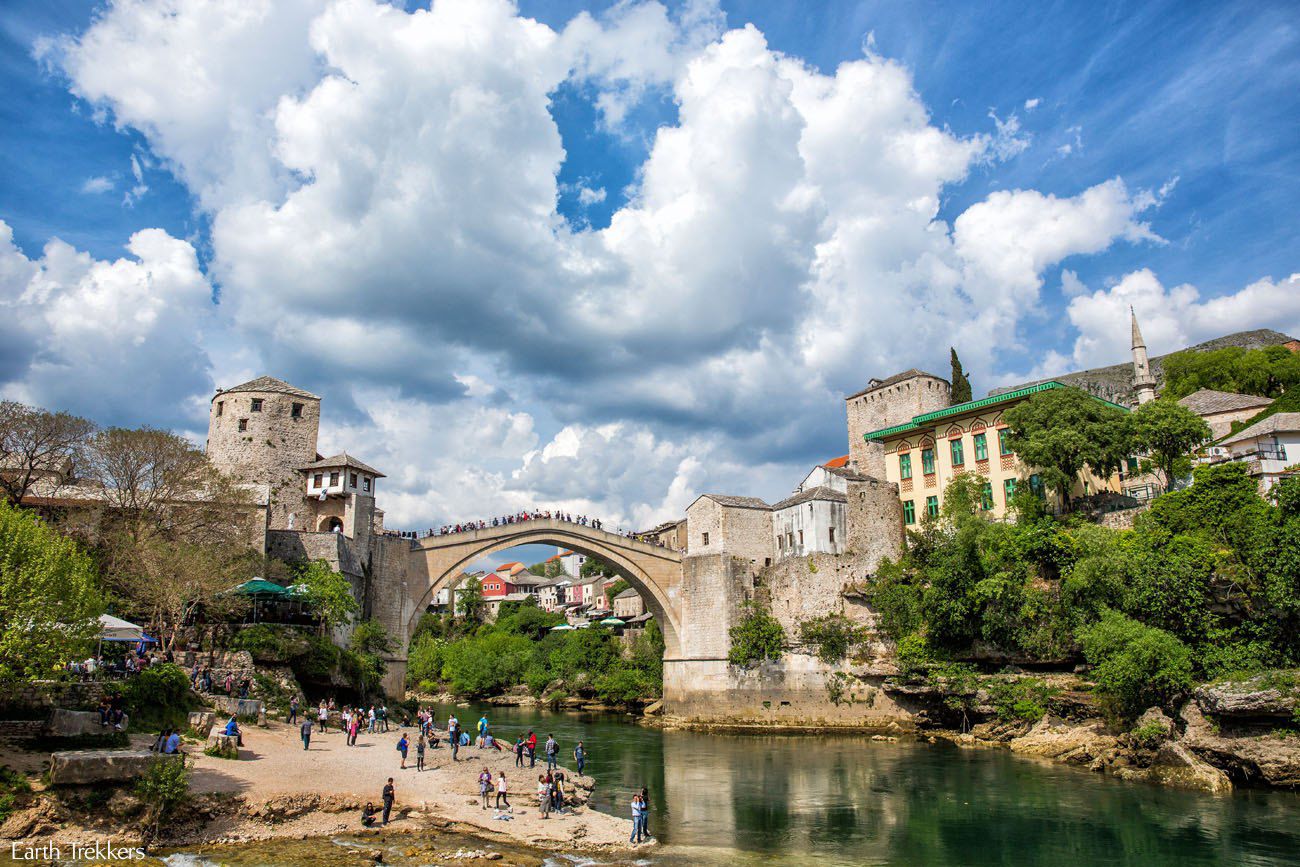 Lucki Most is a bridge that crosses the Neretva River, just a few hundred meters south of Stari Most. This spot is the farthest away from the Old Bridge on the list, but it adds a wonderful perspective of the city. Plus, few people venture out this far, even though it is only a 5-minute walk from the Old Town.

If you want an even better view, there is a concrete peninsula jutting out from the bridge. We walked onto this to take these photos. Just be careful and hold onto the railing. 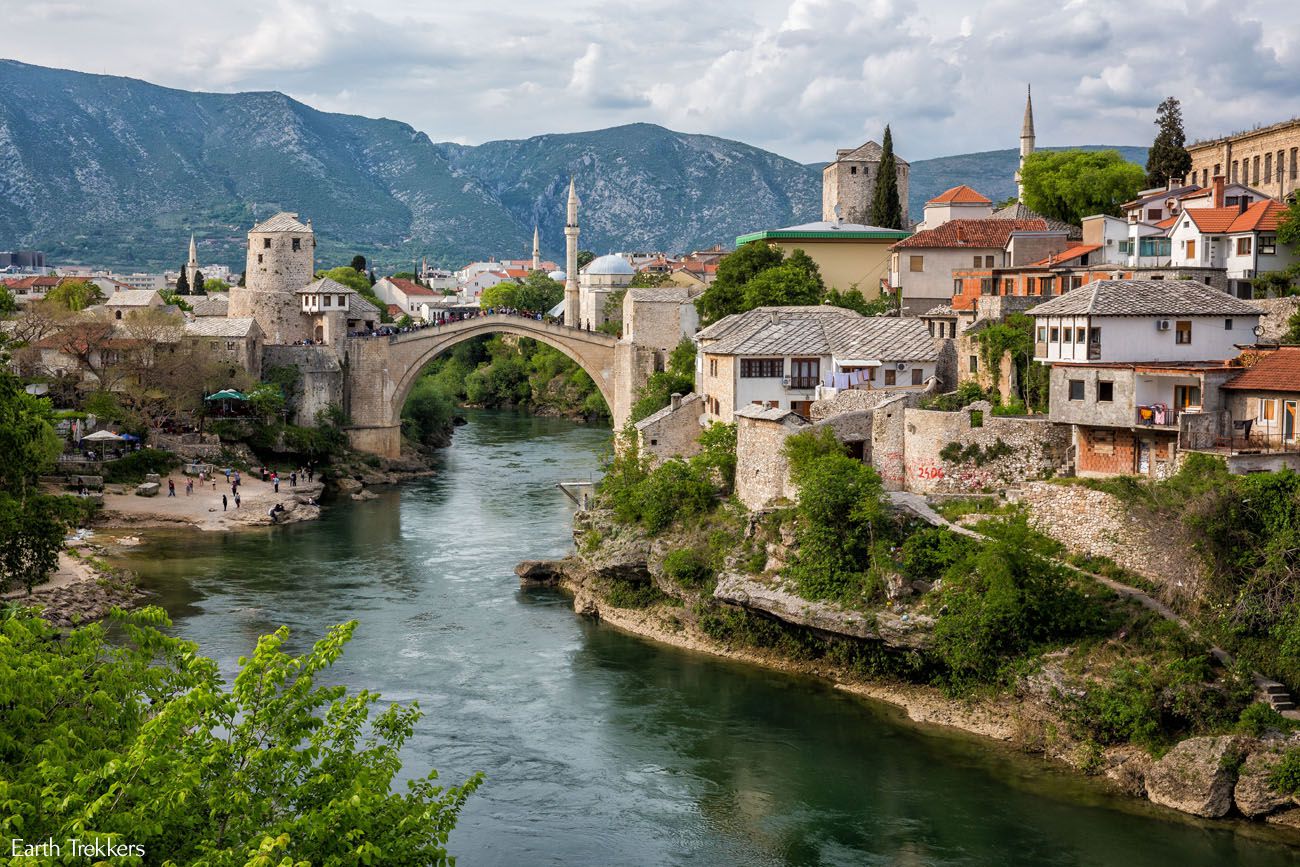 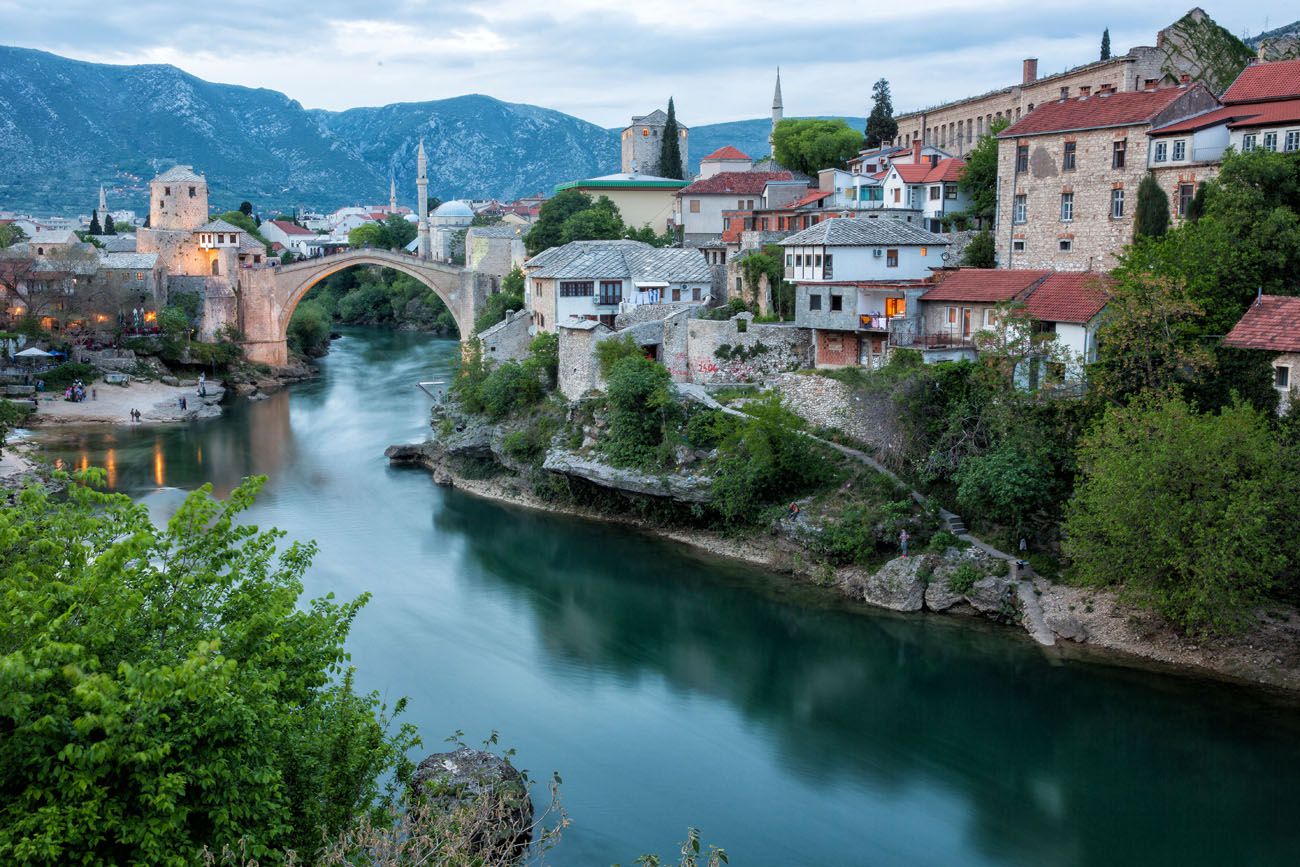 Located north of the Old Bridge, you must pay a fee to take your photos. But included in the fee is a visit to the mosque and the minaret.

For 6KM, you can take a photo of the Old Bridge at ground level, getting this shot. 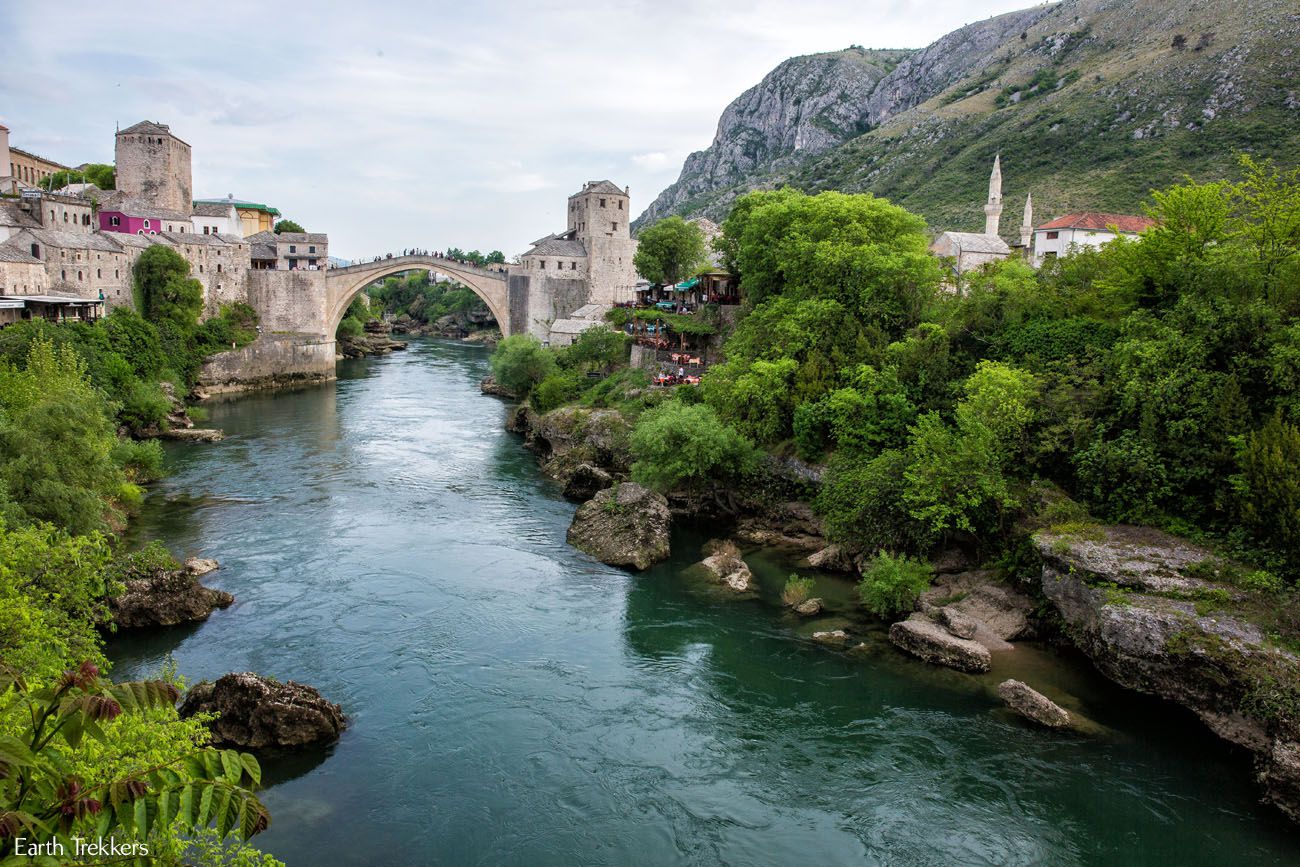 Pay a little more (a total of 12KM) and the view is spectacular…an aerial view taken from the top of the minaret. To get to the top, it’s a narrow, claustrophobic spiral staircase with steep stairs, but it’s worth it! 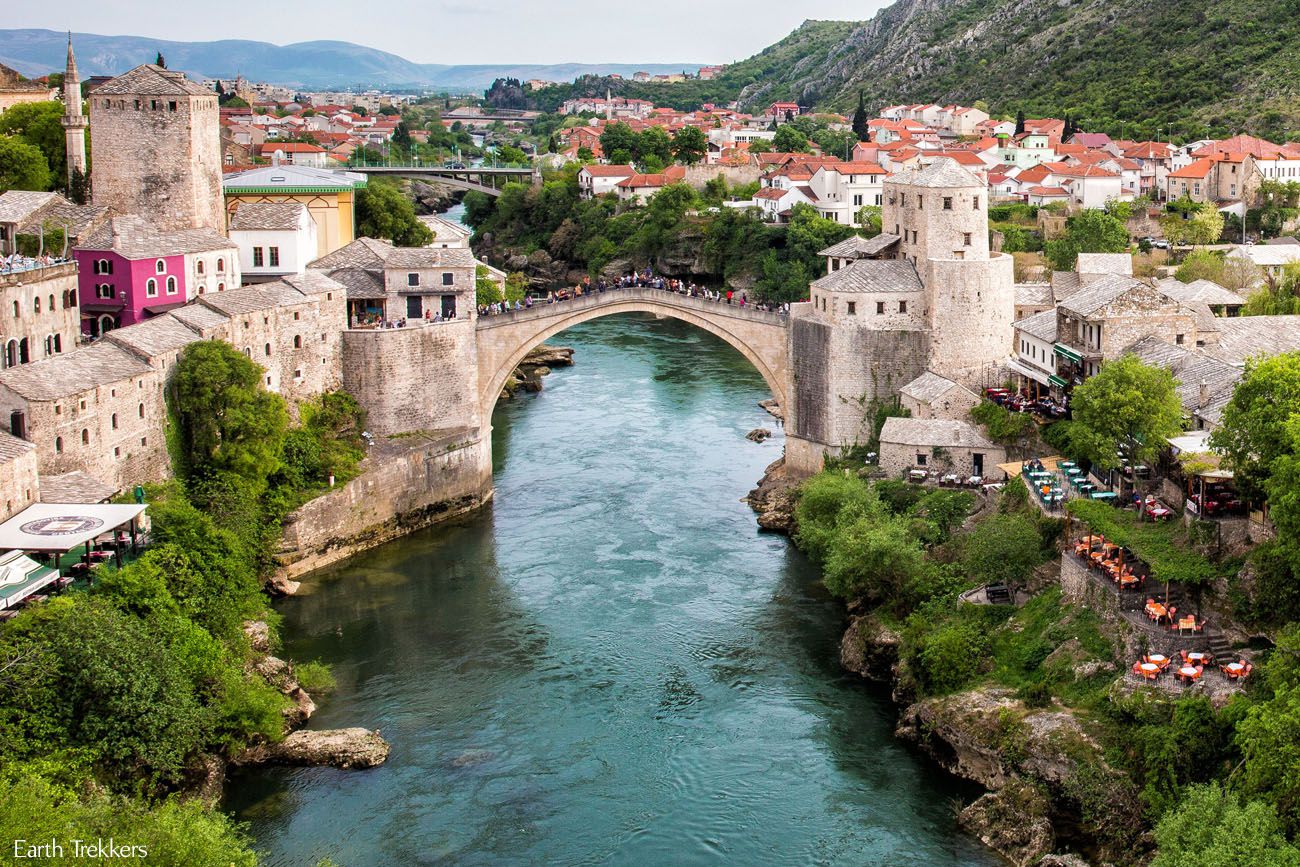 There are a number of cafes and restaurants on the banks of the Neretva River, all advertising their amazing views of the bridge. We chose Lagero, because of its terrace overlooking Stari Most. This is a great spot for dinner or just to have a drink. Sit back, relax, and take in this view. Gorgeous!! 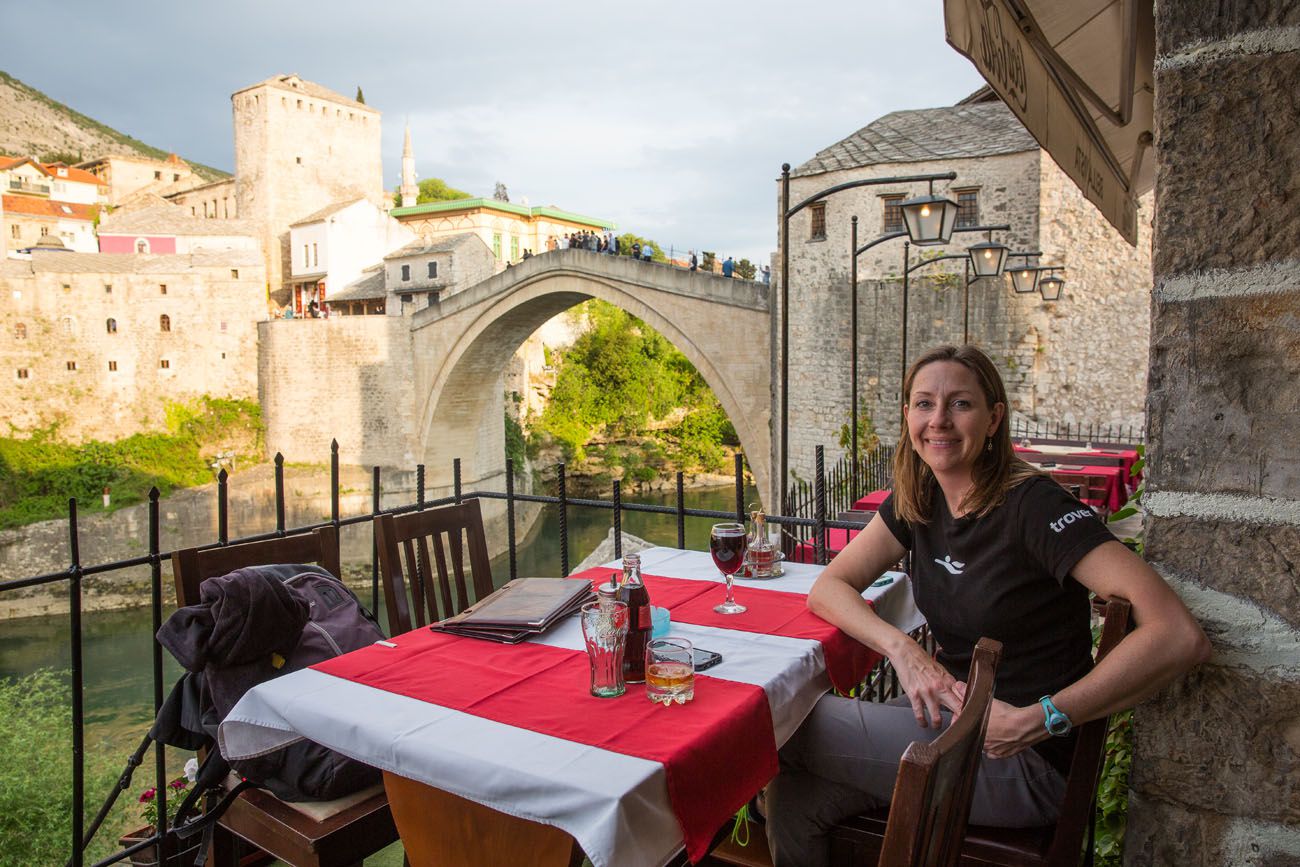 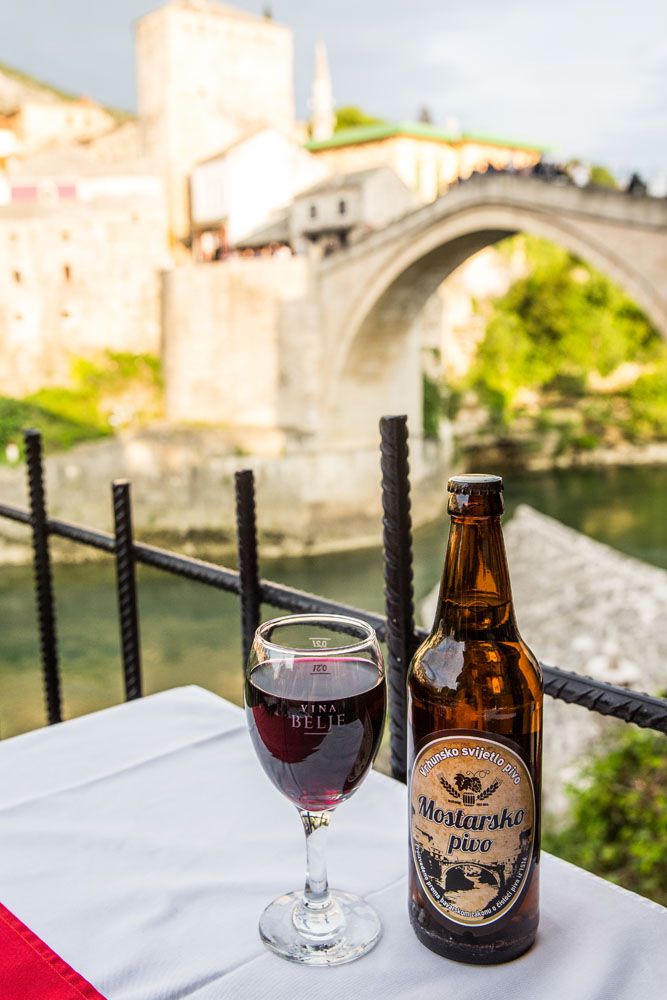 From the Old Bridge

A visit to Mostar would not be complete without a few photos taken from Stari Most. Take some selfies or have another traveler snap a photo of your group; there will be plenty of people up here doing the same thing.

To get a close up view of the Old Bridge, there is a vantage point just before stepping onto the bridge. 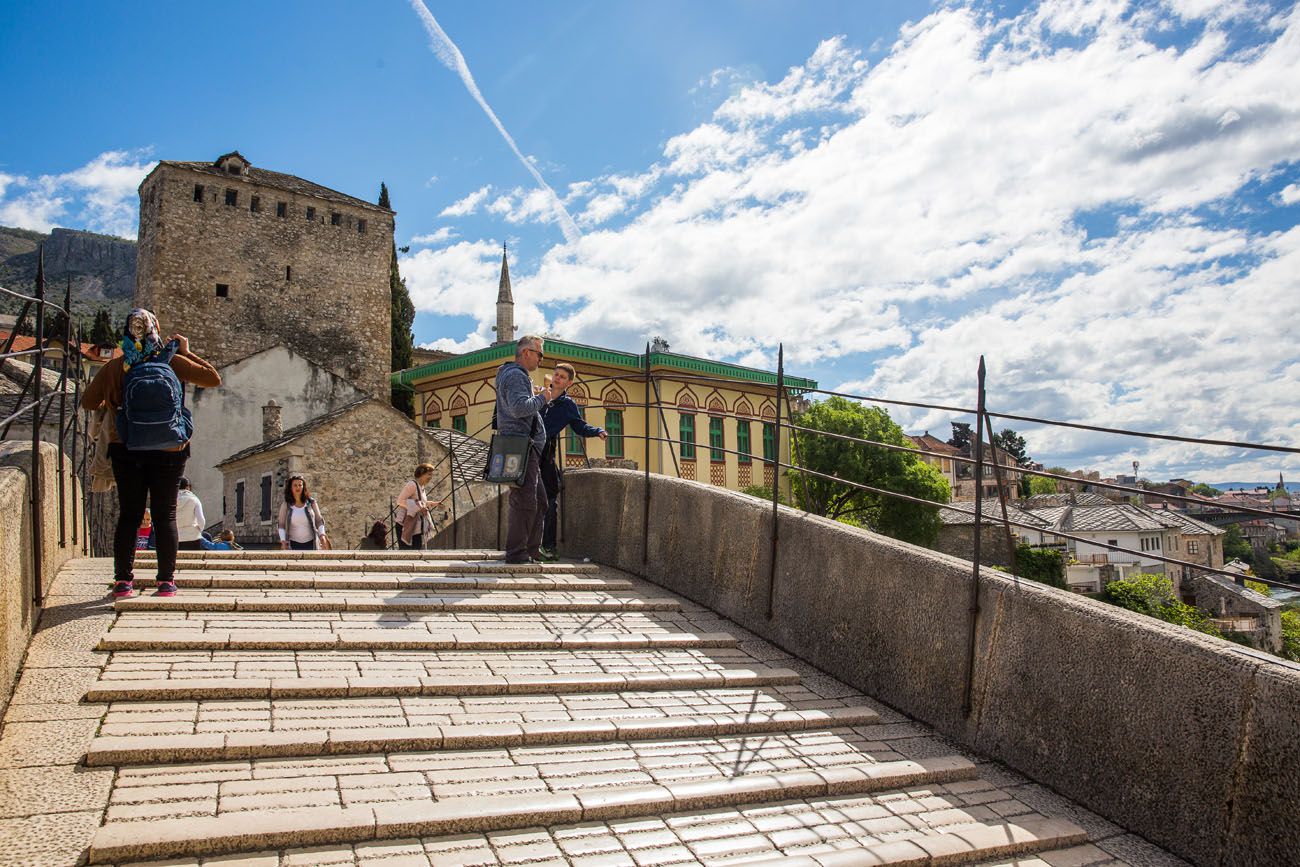 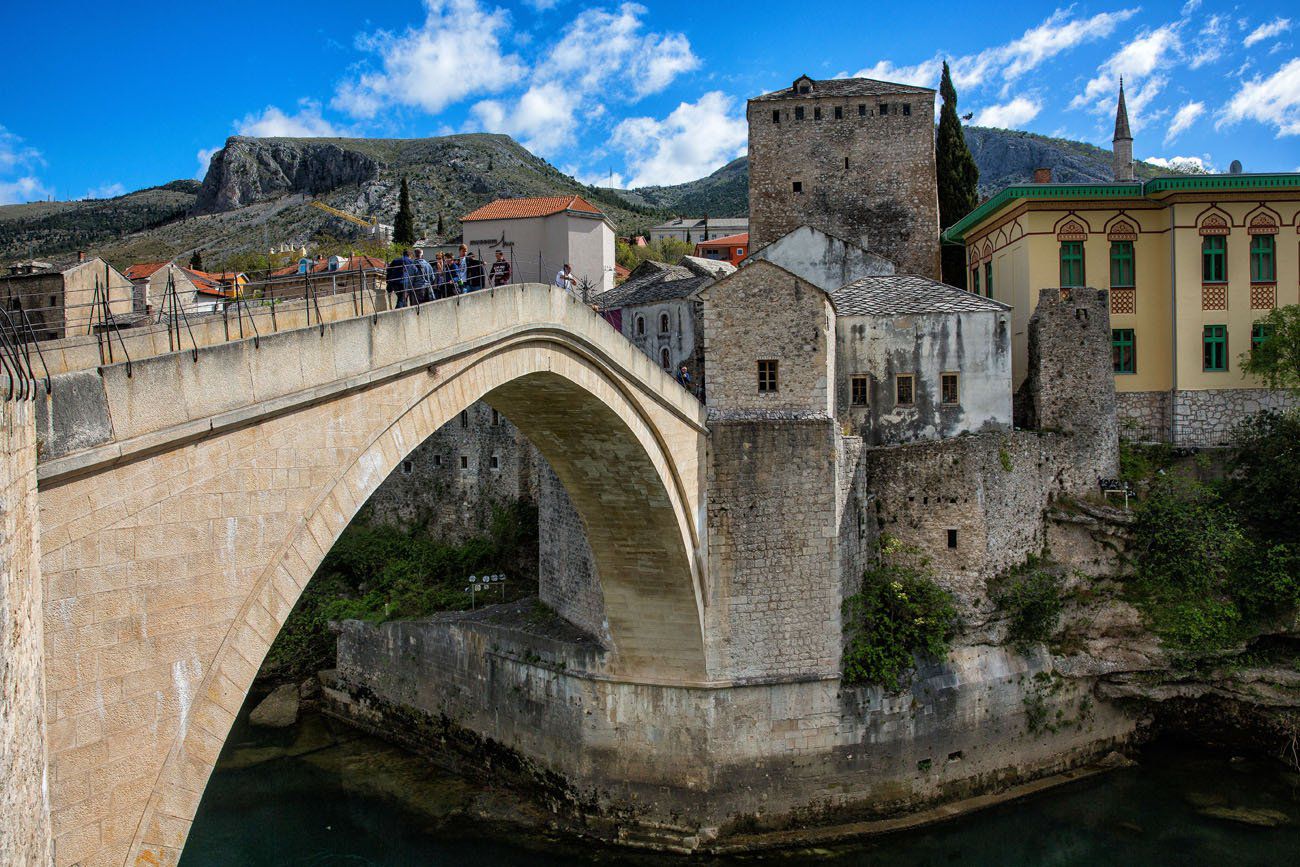 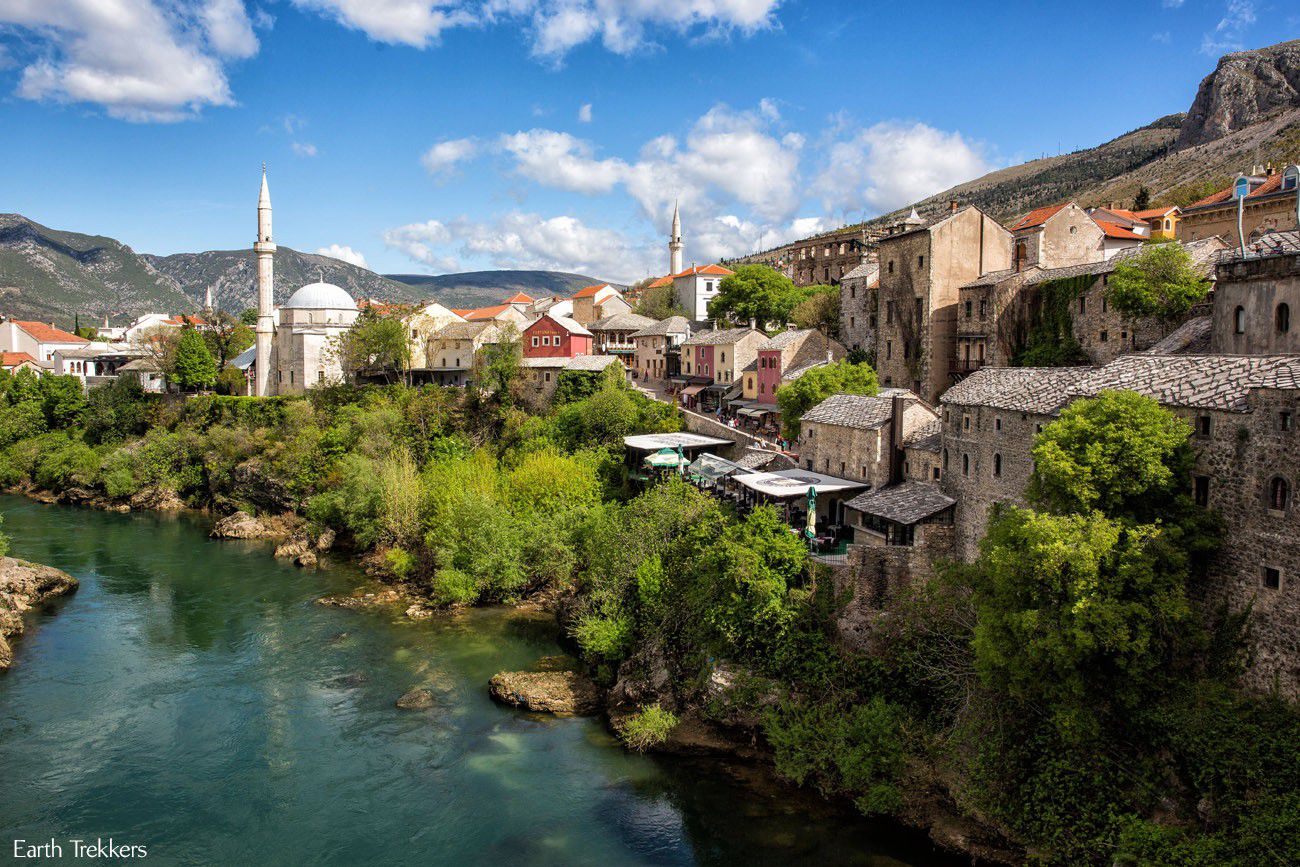 From the Streets of the Old Town

Our final spot is taken from the streets of the Old Town, located on the east bank of the Neretva River. 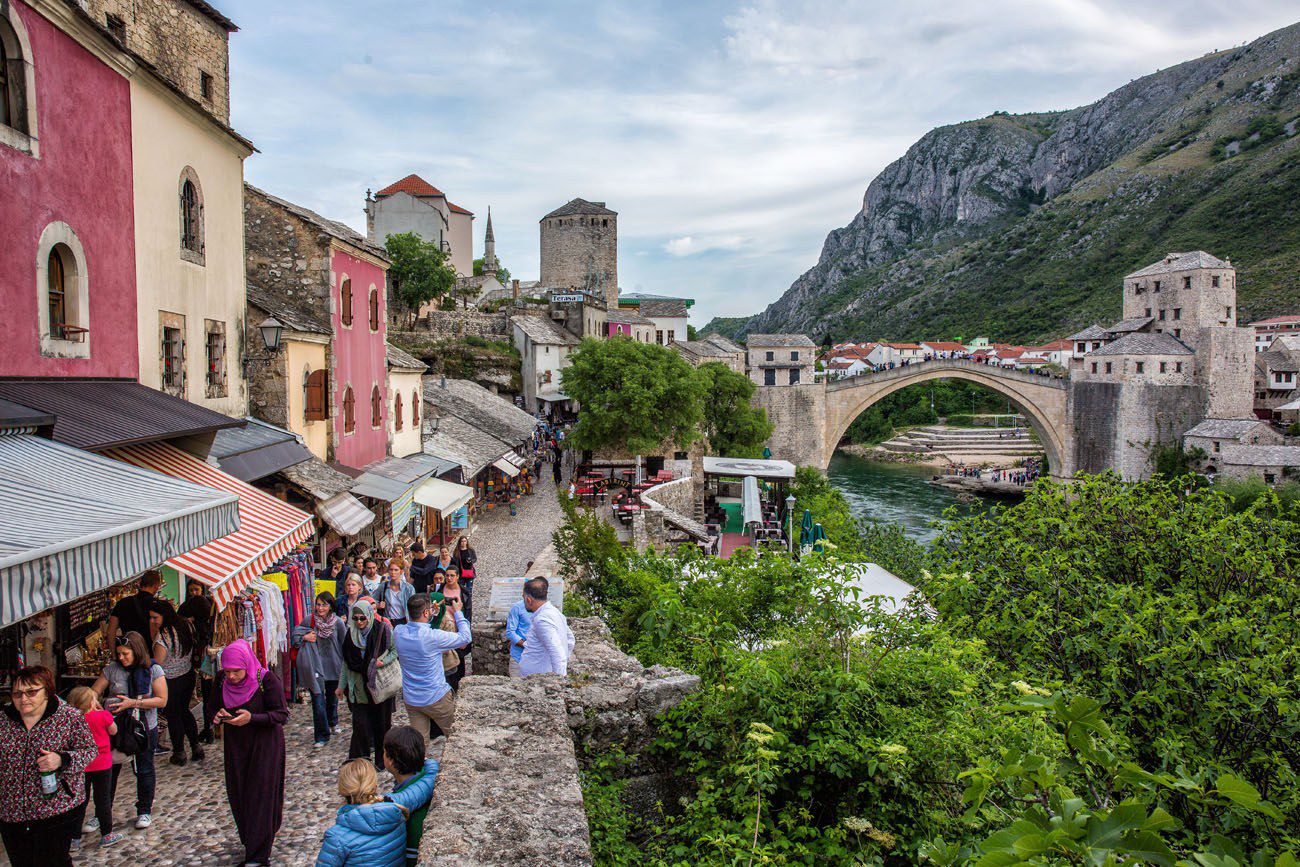 Several Tips for Getting the Best Photos

Do you want photos of the bridge without groups of people on the banks of the Neretva River? Go at sunrise. Mostar is very quiet in the early morning hours. The only people who seemed to be awake on the morning of our visit were a few other groggy photographers and several people on their way to work. And cats…there are cats all over the place here.

Sunrise and sunset are the best times to photograph the bridge. Unfortunately for us, our sunrise was rather boring, with the sky blanketed in clouds. Just an hour later it started raining and would not stop until later that night. 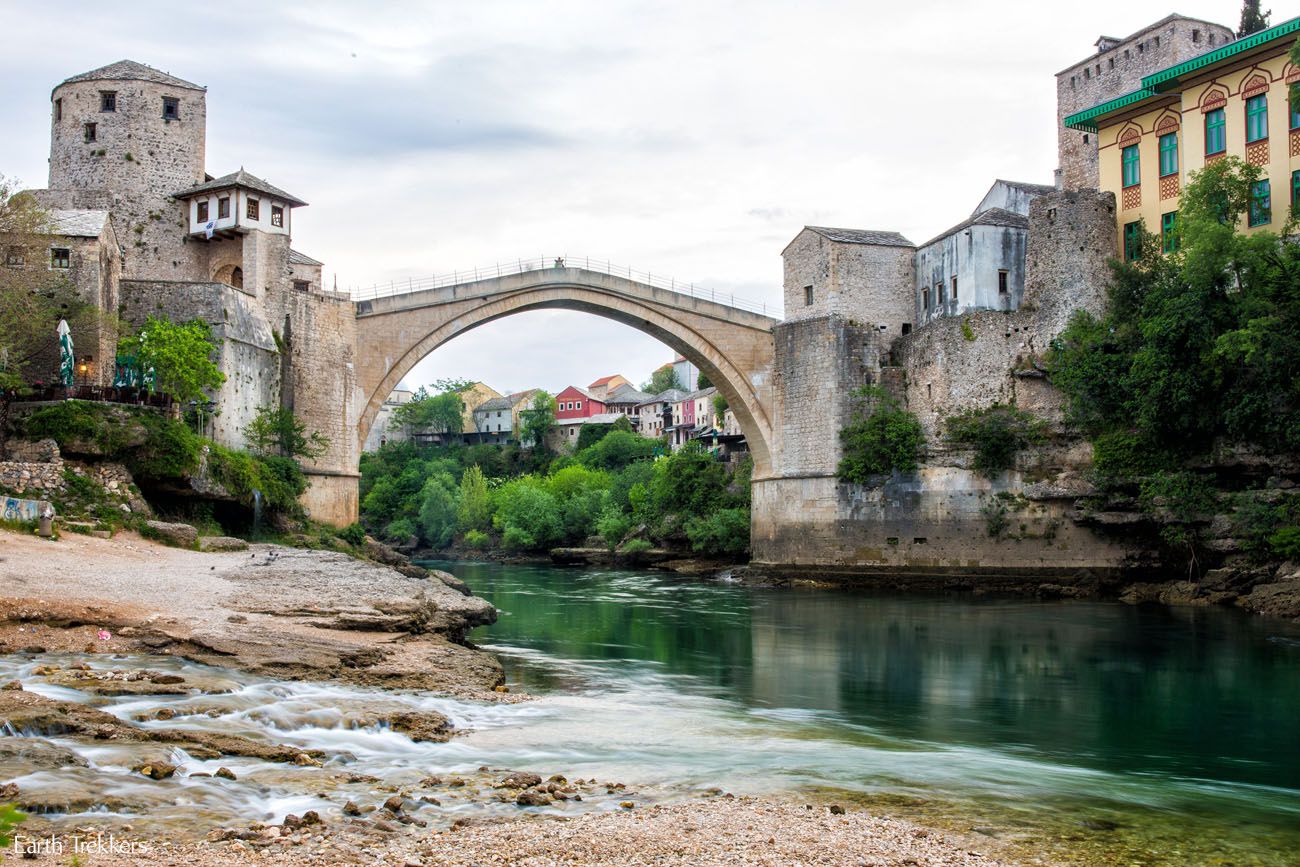 If you can, plan to stay overnight in Mostar. This allows you to see the bridge at sunrise and sunset, which is a nice experience, even if you are not planning to photograph the bridge. This is a charming little town and it’s nice to relax and explore the old town without feeling rushed.

Where We Stayed in Mostar

We stayed at Hotel-Restaurant Kriva-Cuprija. Located in the Old Town just 5 minutes from the Old Bridge, this three-star hotel gets its name because it sits right next to the Crooked Bridge. It’s a beautiful hotel with an awesome location. 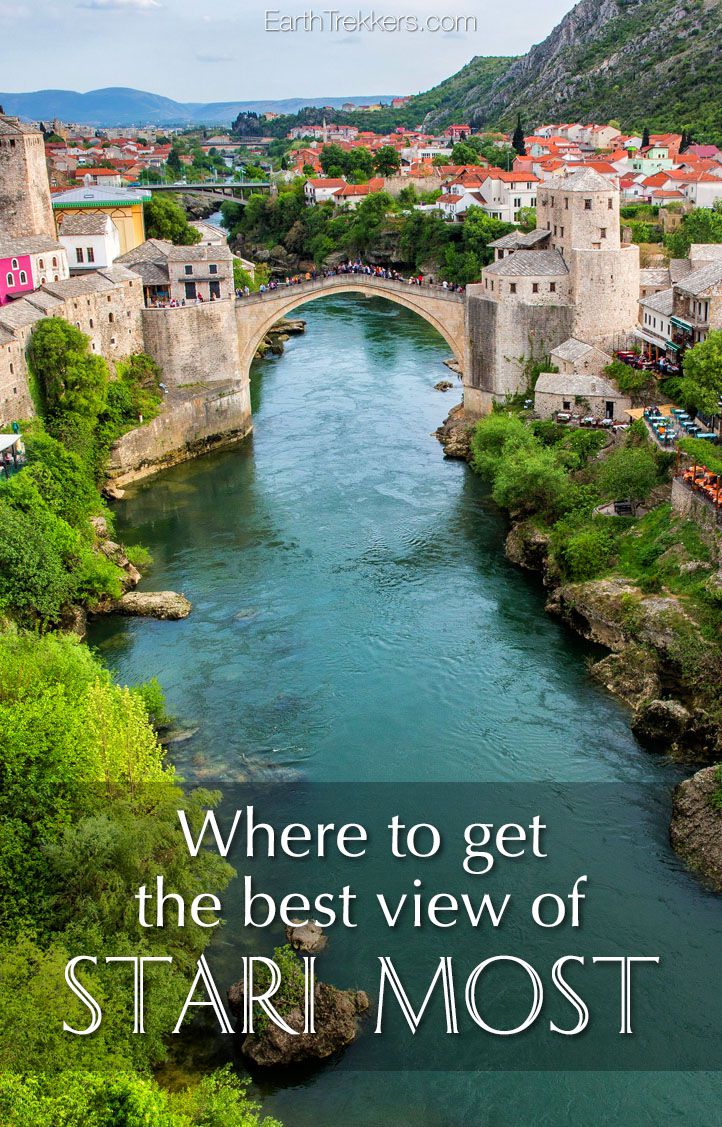