The Gettysburg Experience from a Teenager’s Perspective 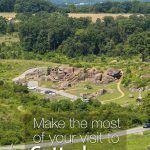 On a weekday in July, Kara, Grandmom and I spent our day at Gettysburg National Military Park. We spent almost one full day here and filled up our time with different tours of the park. There is plenty to do here in one day and every experience is unique.

A Brief History of Gettysburg

Let’s start with some history of Gettysburg. It was the largest battle that took place in the Western Hemisphere to this day and more men died at this battle than any other battle on American soil. The battle of Gettysburg lasted three days and took place from July 1, 1863 to July 3, 1863 during the Civil War, with the Union battling the Confederates. There were a drastic amount of casualties during the battle, a total of 51,000 people killed, wounded, or missing.

The battle started with the two armies practically stumbling into each other. General Robert E Lee commanded the Confederate army and General George Meade commanded the Union army. Fun fact, General Joseph Hooker resigned before the battle and the position went to George Meade on June 28, 1863. Basically, he had only 3 days of experience before Gettysburg. Talk about pressure.

On the first day, the armies clashed west of Gettysburg during the morning, and things proceeded to get more intense as the day went on. Eventually, the Union troops were forced to retreat into town to take on the defensive and rally along Cemetery Ridge and Culps Hill.

As the second day dawned, General Lee used most of his troops to attack the right and left flanks of the Union troops to greatly weaken their defense. However, the Union forces were able to repel these attacks.

By the third day, Lee returns his focus to the center of the Union lines and launched a two-hour bombardment with his artillery. Then he sent in 12,000 confederate troops to cripple the Union lines, but he was met with strong resistance and was defeated. This was known as Pickett’s Charge and it was the downfall of the Confederates. This was deemed to be a major loss, due to the heavy casualties, and Lee withdrew on July 4, granting the Union a victory. 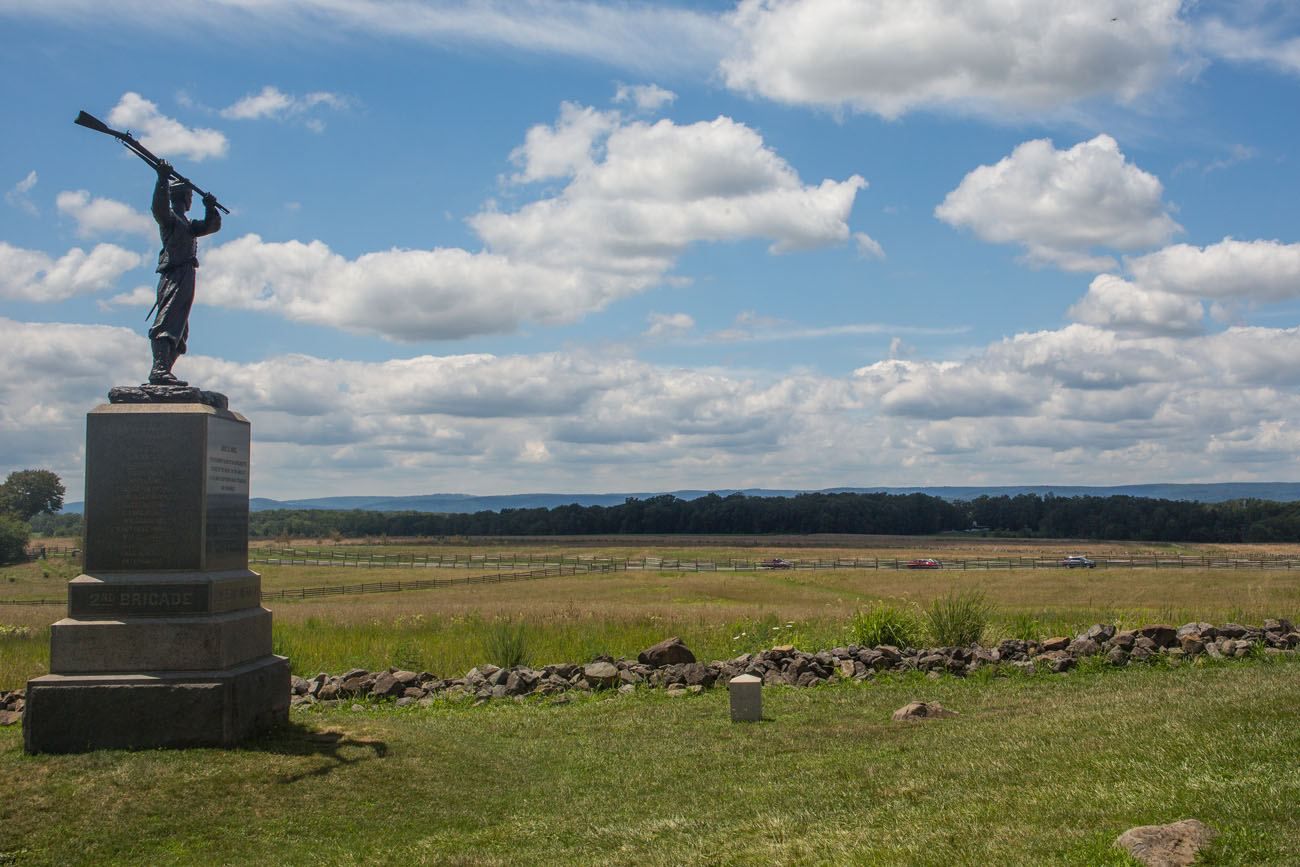 Things to do in Gettysburg

This should be your first stop on a visit to the Gettysburg Battleground. Pick up your free map, watch the 30-minute video that gives background information on the battle, and check out the “Battle of Gettysburg” cyclorama painting.

There are many different approaches to touring Gettysburg. You can take the self-guided auto tour, which includes 16 stops, covering almost the entire park. Once on the auto tour, you can get off at any time and take detours to other sites not available from the route of the auto tour. This is highly recommended, as you can go at your own pace. And it is free!

You can get a copy of this map at the Visitor Center. 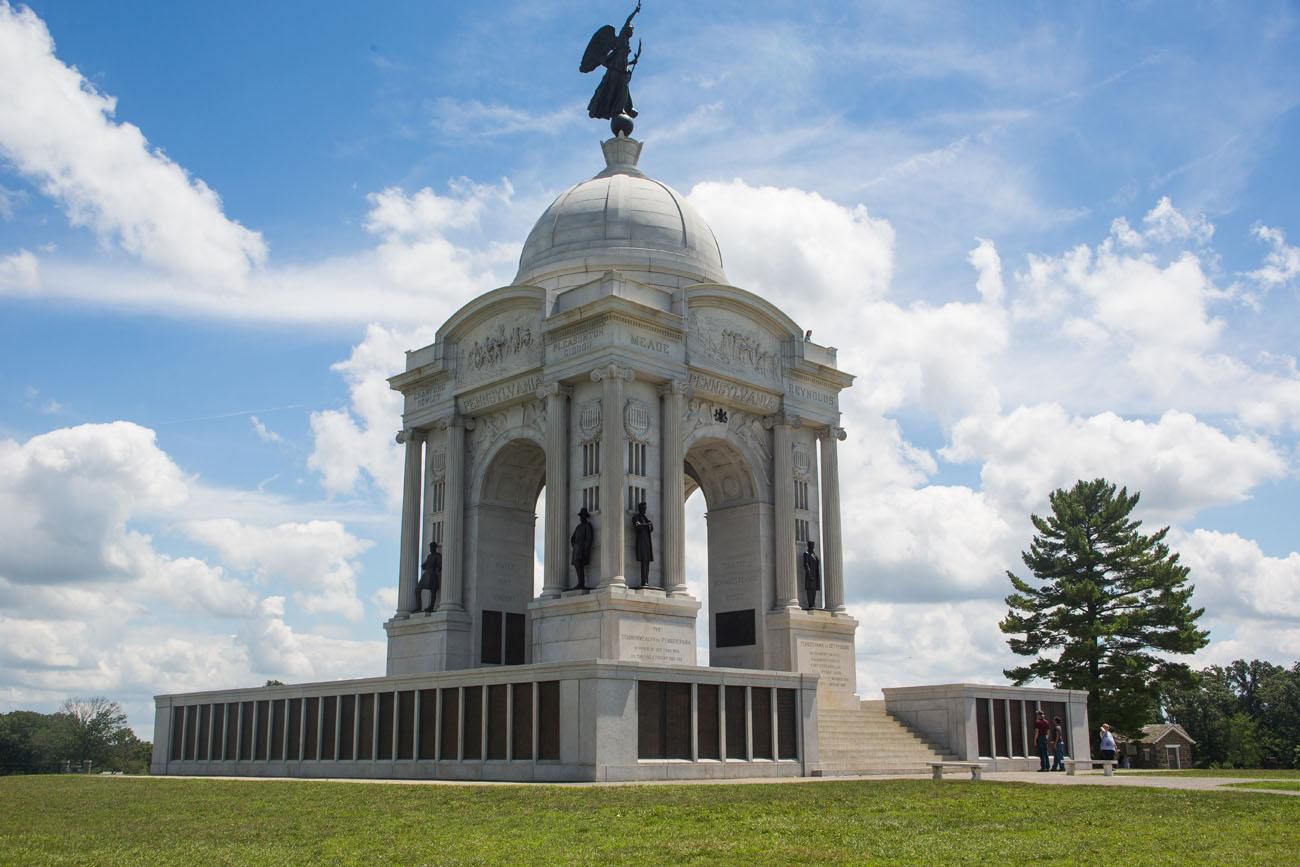 The main attraction of the park are the wide variety of ranger programs that are offered. All of them are free and usually take about an hour. They can be found all over the park as well. Here are some of the more popular ones of the bunch.

The 1st Day of Battle: The Devil’s to Pay! This covers the 1st day of battle over a 45 minute period. It’s located at the Eternal Light Peace Memorial, where you can get a view of where the 1st day battle occurred. In my opinion, I thought this was mostly boring, but it was still helpful to understand the 1st day. 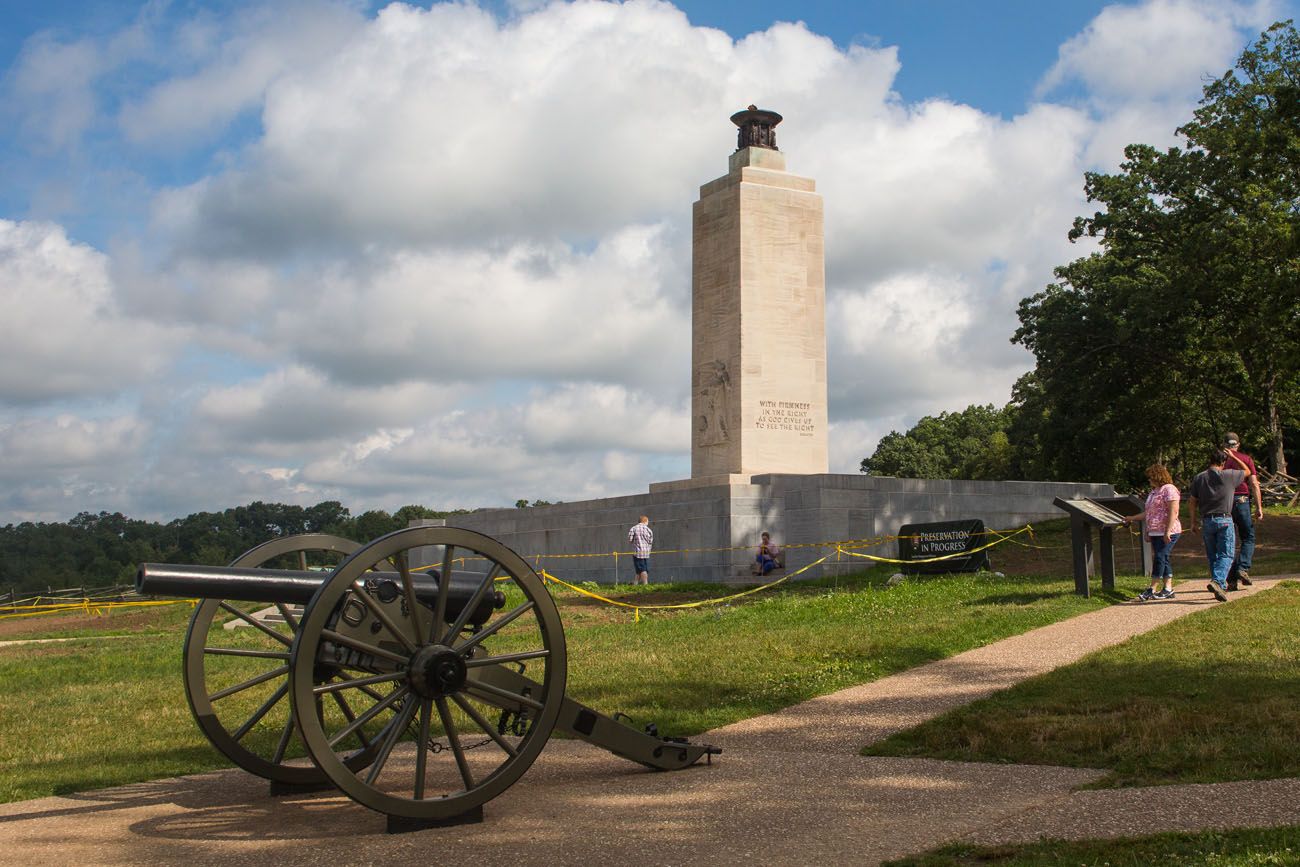 The 2nd Day of Battle: A Grand Terrible Drama. As the name implies, it covers most of the events that occurred on the 2nd day. This is offered daily, along with the 1st day of Battle. However, there is a better tour that we recommend, the Battle for Little Round Top (which is only offered Mon/Wed/Sat). 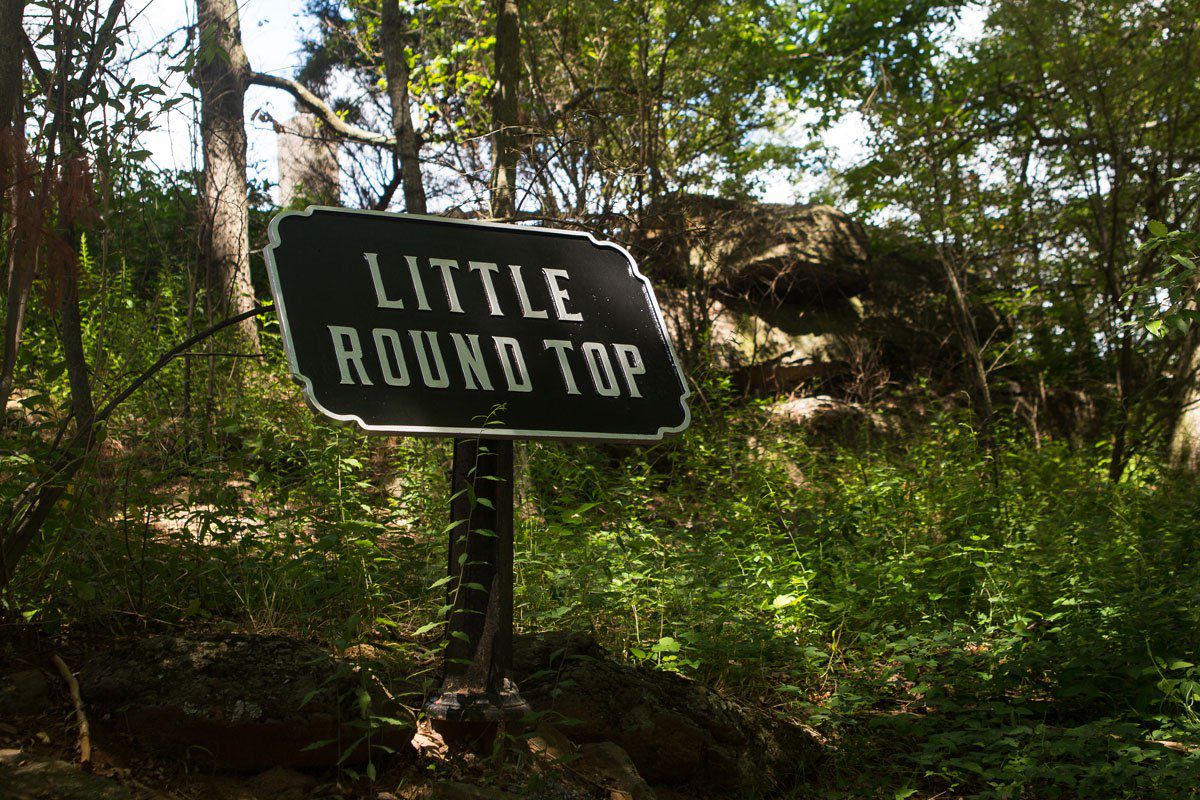 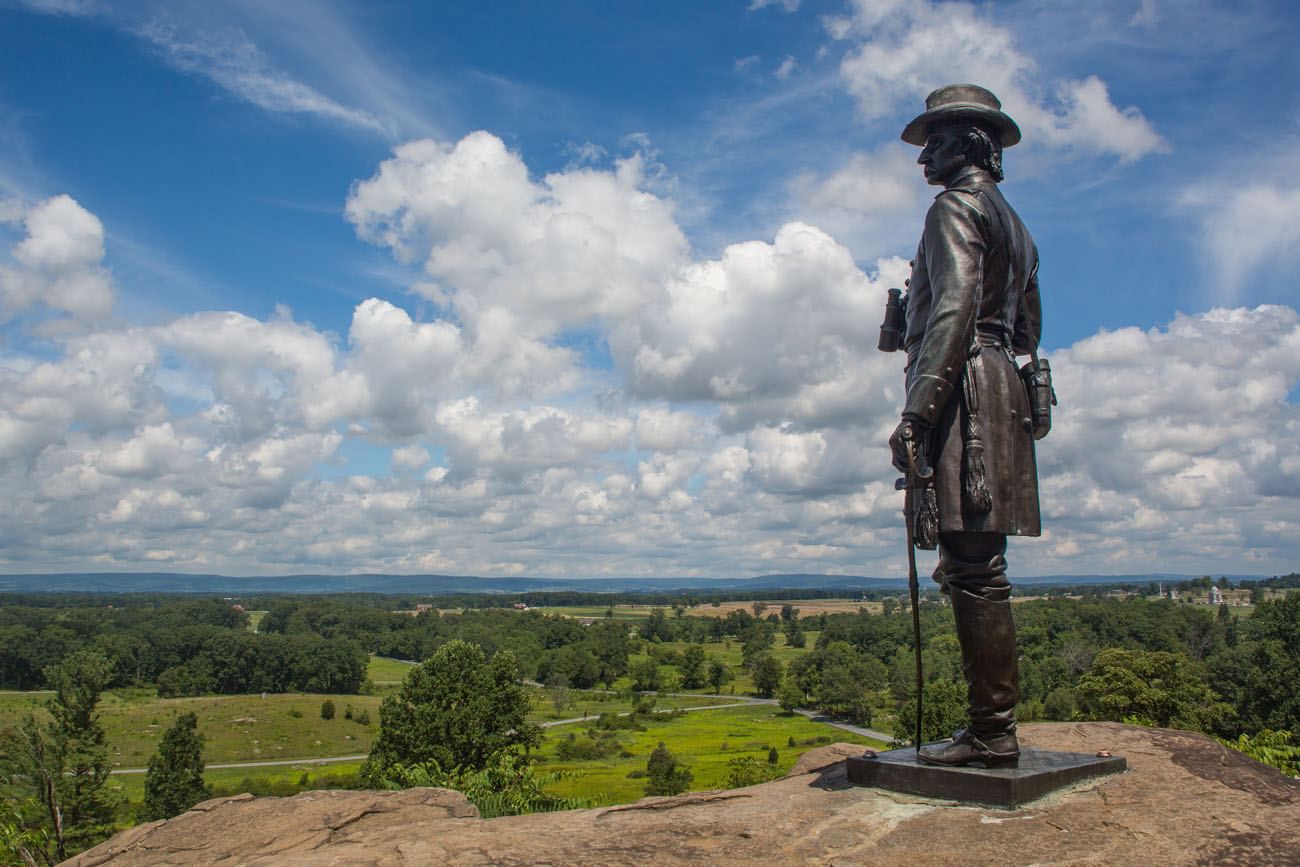 The 3rd Day and Beyond: Stay and Fight it Out! This tour is definitely worth visiting. It covers in great detail the events of the 3rd day and what brought the Union to a victory against the Confederates. I did not find this boring, as some of the previous tours may have been. This tour starts in the National Cemetery Parking Lot, but not the cemetery itself.

Side Note: The Three Tours that each cover a specific day in the battle are all daily, and have corresponding start times so you can see them consecutively without being in a rush.

There are more Ranger Programs if you want to learn more about Gettysburg. Visit the National Park Service website for full details. 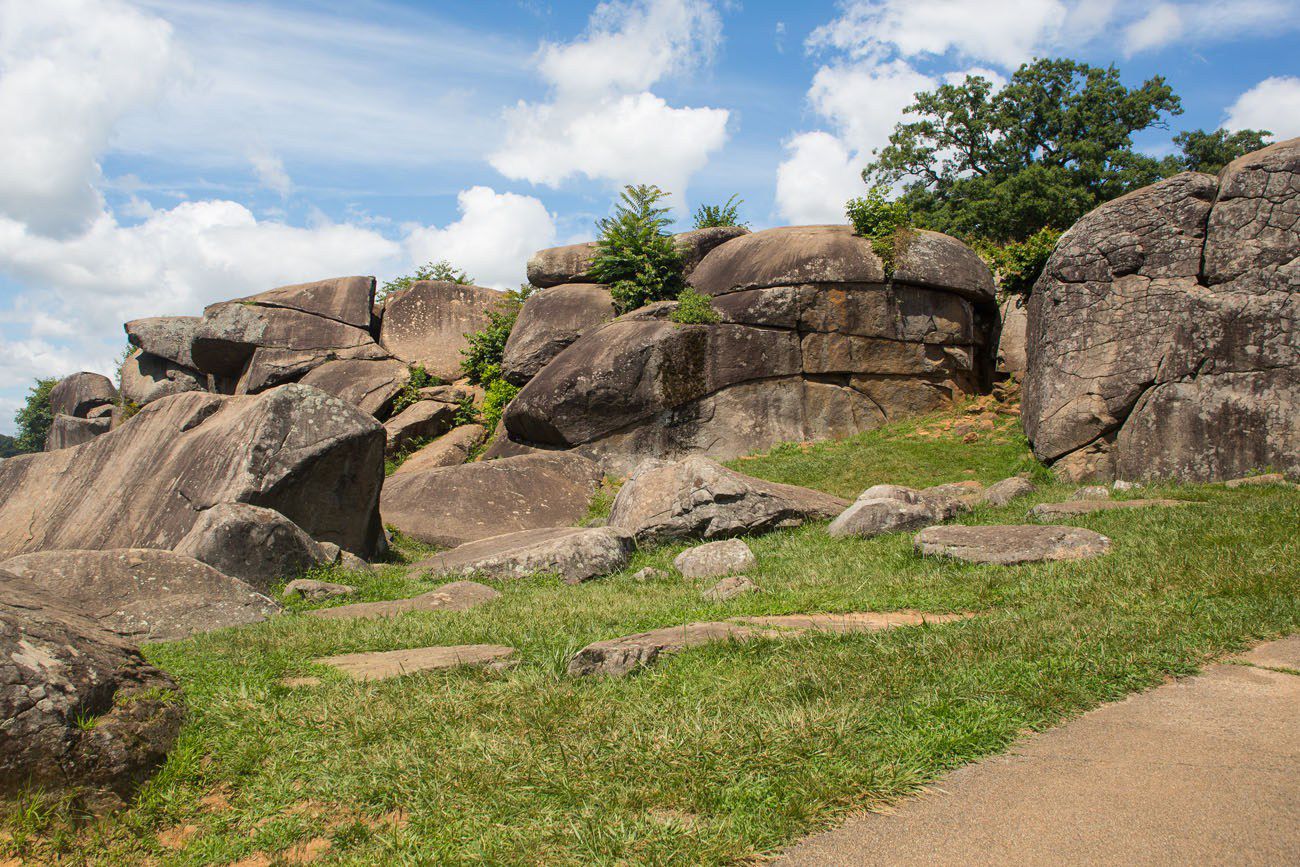 It might not seem that high, but Little Round Top offers great views over Gettysburg. Also, this is one of the spots where the Union held off the Confederates. This is well-known due to the movie “Gettysburg.” 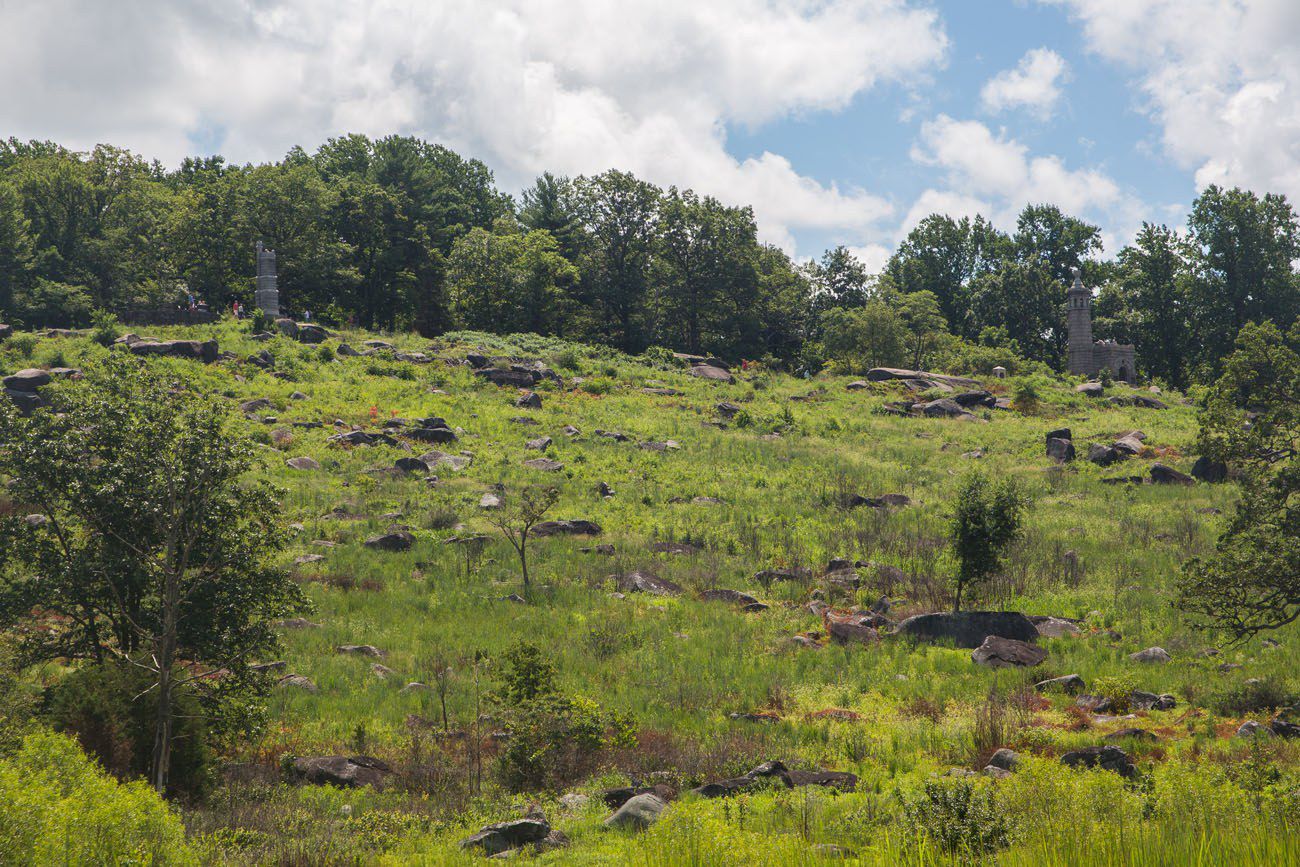 View from Little Round Top 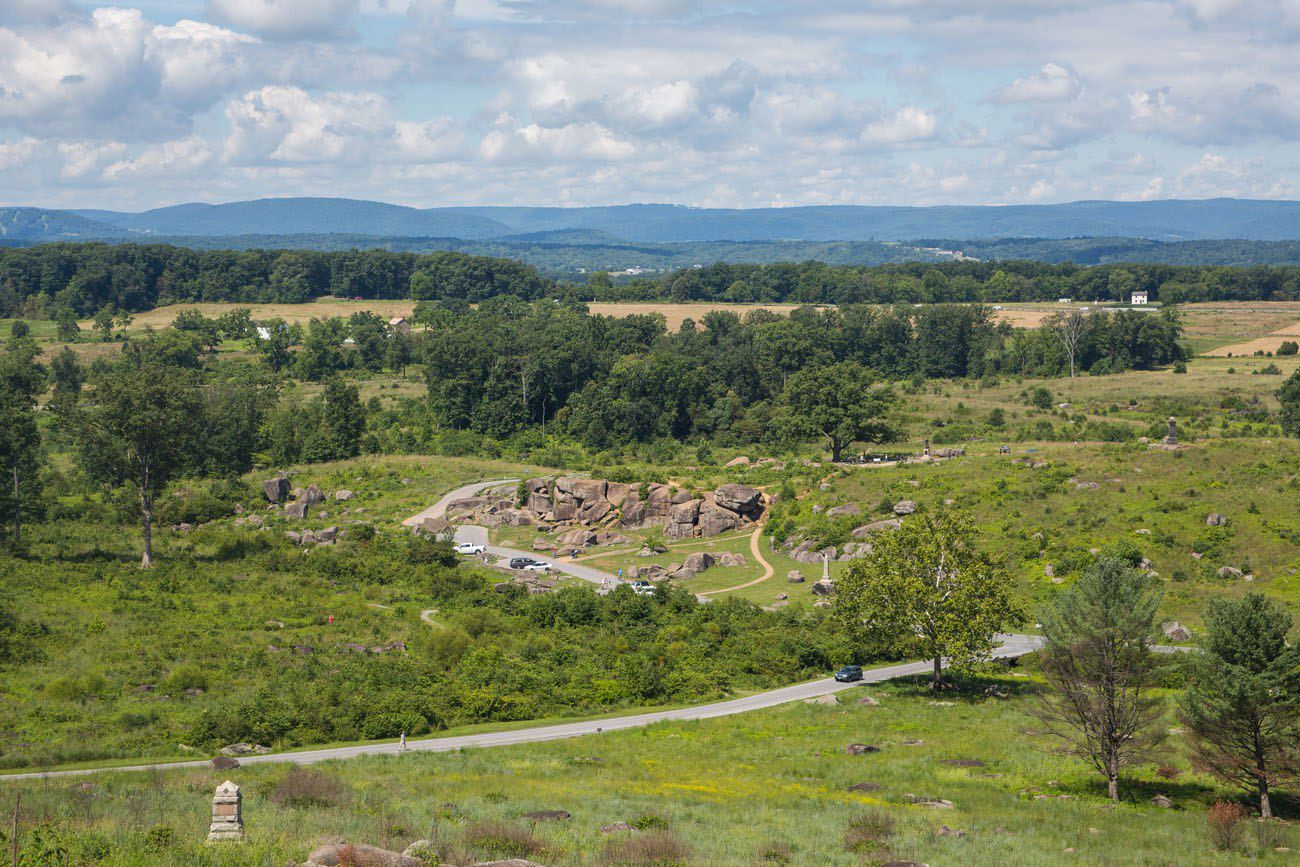 We did not have the time to see all of the sites in Gettysburg, but here are a few popular ones that we missed out on. Some of these places are located in the town of Gettysburg, not in the Gettysburg National Military Park.

Soldier’s National Cemetery. This is the final resting place of over 3,500 soldiers who died during the Battle of Gettysburg. This is also where Abraham Lincoln delivered the Gettysburg Address.

Gettysburg Diorama. This is definitely a highlight to visit. This diorama spans the 6,000-acre battlefield, and houses the 20,000 soldiers and buildings all found in Gettysburg! A 30-minute light and sound show is also included to narrate the battle, spanning from the first to the last shots fired.

Jennie Wade House. This tour showcases the life of Jennie Wade, who died at the age of 20 while at home kneading dough. Fun but sad fact, she was the only civilian to die during the Battle of Gettysburg. Like the Shriver House Museum, guides lead you through the house while wearing period attire and tell of the tragedy that happened to Jennie and her family.

Dobbin House Tavern. If you need a chance to grab some food while touring Gettysburg, this is the spot to be. From casual dining to fine dining to a place to rest your head and sleep, this historic home is perfect. The tavern offers a wide variety of food, and includes a B&B to spend the night in Gettysburg.

If you happen to be visiting Gettysburg with kids, I would recommend some exhibits like the Gettysburg Diorama and the Devils Den landmark. Kids may not be a fan of the ranger program tours, as that could get boring. Something like the diorama is great as its fun and showcases the entire battle in the course of 30 minutes. Also, if your kids are more of the athletic type, you could take bicycles and bike around Gettysburg, or go horseback riding along the different trails in the park. 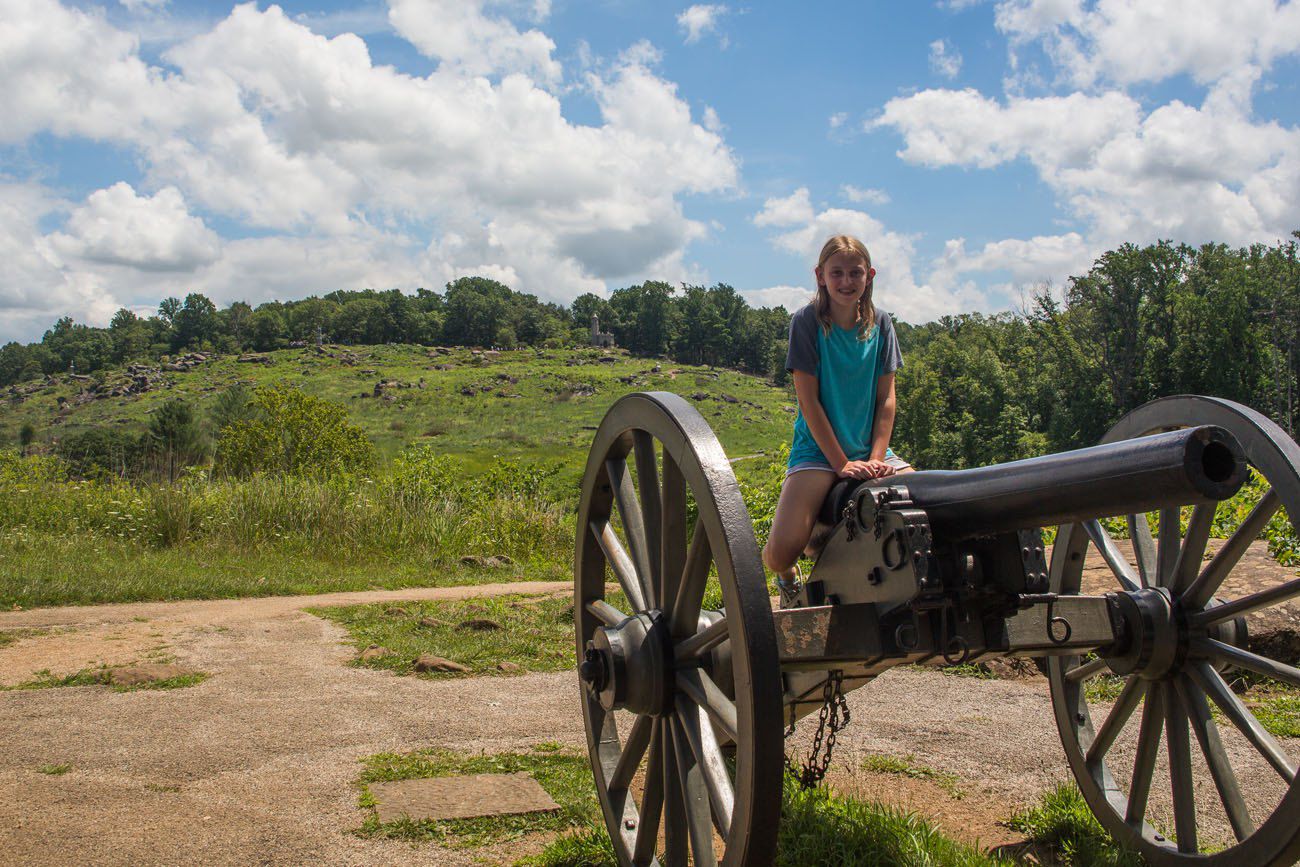 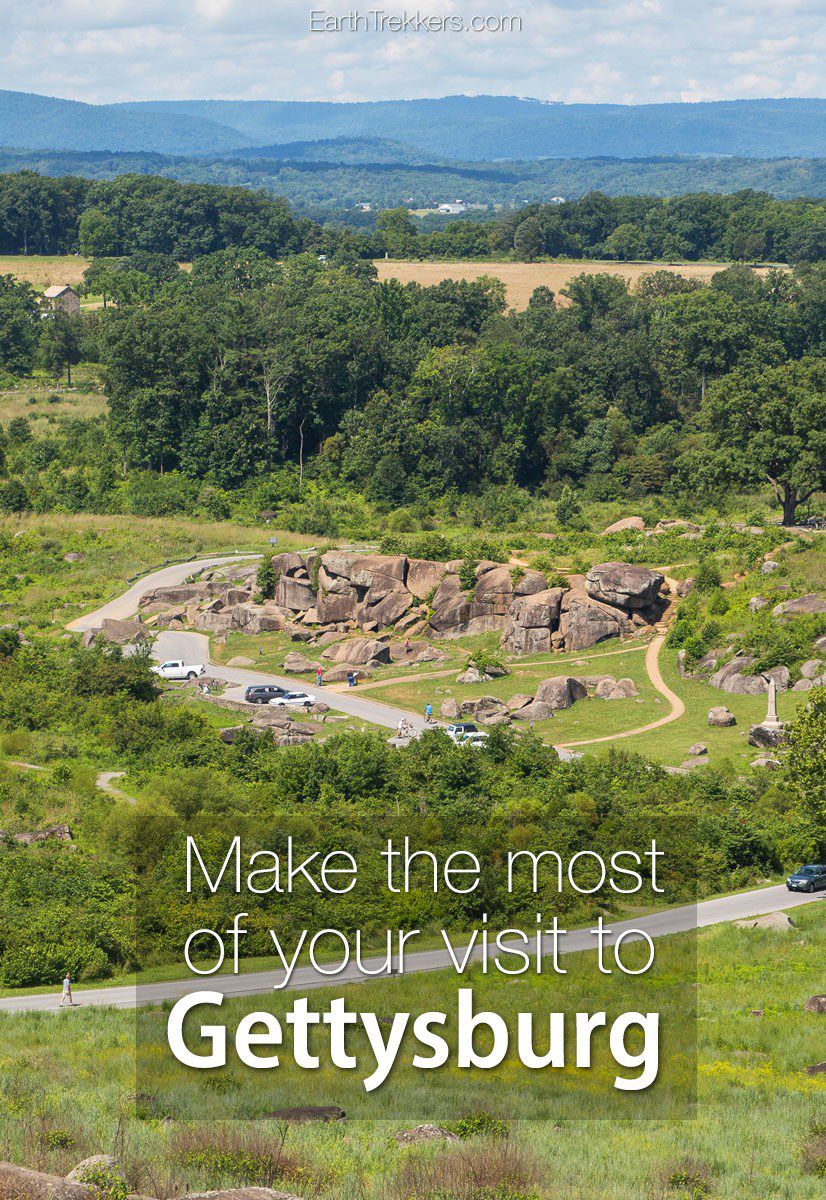