Mount Rushmore: 10 Things to Know Before You Go 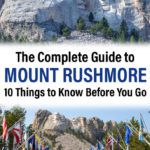 How to Visit Mount Rushmore

The four presidents carved onto Mount Rushmore are George Washington, Thomas Jefferson, Theodore Roosevelt, and Abraham Lincoln, from left to right. These four presidents were chosen because they represent the nation’s birth, growth, development, and preservation.

Originally, the plan was to portray the presidents from the waist up. However, funding ran out in 1941 so only the heads were carved from the rock.

Mount Rushmore was already named before the carving began. The peak was named after Charles E. Rushmore, a New York attorney who visited the area in 1885.

Gutzon Borglum created the sculpture’s design and oversaw the entire project. He died in March 1941, just before its completion. His son took over leadership of the project until it was finished.

2. The Controversy Behind Mount Rushmore

The Black Hills of South Dakota are sacred to the Lakota Sioux, the original people who lived on this land before white settlers arrived.

In 1868, the US government promised the Sioux that they could remain on the land, including the Black Hills of South Dakota. This promise only lasted until the 1870’s, when gold was found in the area, attracting large numbers of prospectors. The Sioux were forced out of the Black Hills so the area could be mined for gold.

Resisting the shrinking reservation sizes, Sitting Bull and Crazy Horse retaliated with attacks on the US Army. One of these famous battles was against General Custer at the Battle of Little Bighorn, aka Custer’s Last Stand. The Native Americans were later defeated at the Battle of Wounded Knee in 1890. Half of the Sioux killed were women and children.

With memories of conflict still fresh in the minds of Native Americans, a white man, Gutzon Borglum, arrives to the area in 1927 with the intention to carve the likenesses of four presidents into the sacred Black Hills.

Doane Robinson, a South Dakota historian, is credited with the idea of carving faces into the Black Hills in order to promote tourism to the area. Robinson wanted to feature Lewis and Clark, Sacagawea, Oglala Lakota chief Red Cloud, Crazy Horse, and Buffalo Bill Cody, all heroes of the American west. Gutzon Borglum thought that the sculpture would have more national appeal if it portrayed four presidents. And thus, Washington, Jefferson, Roosevelt, and Lincoln were carved into Mount Rushmore.

Since the completion of Mount Rushmore, Native Americans have staged protests to have the Black Hills returned to them.

In response to Mount Rushmore, the Crazy Horse Memorial is being constructed at a different location in the Black Hills. It will be larger than Mount Rushmore and has the support of the Lakota chiefs.

If you want to read more about the controversy behind Mount Rushmore, this is a good article on PBS and The Smithsonian has an interesting article about Gutzon Borglum.

3. Best Things to do at Mount Rushmore National Memorial

When you visit Mount Rushmore, there is a lot more to do than just walk up, gaze up at the four presidents, snap a selfie, and leave. Here is a list of things to do at Mount Rushmore. 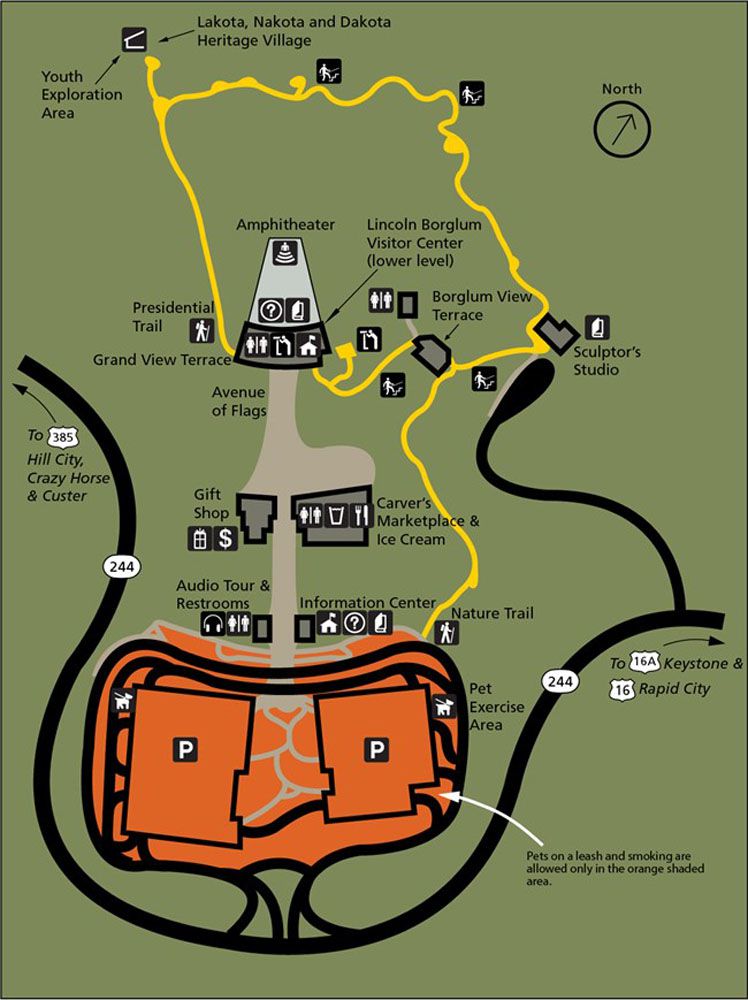 Map of Mount Rushmore from the national park service website.

Avenue of the Flags 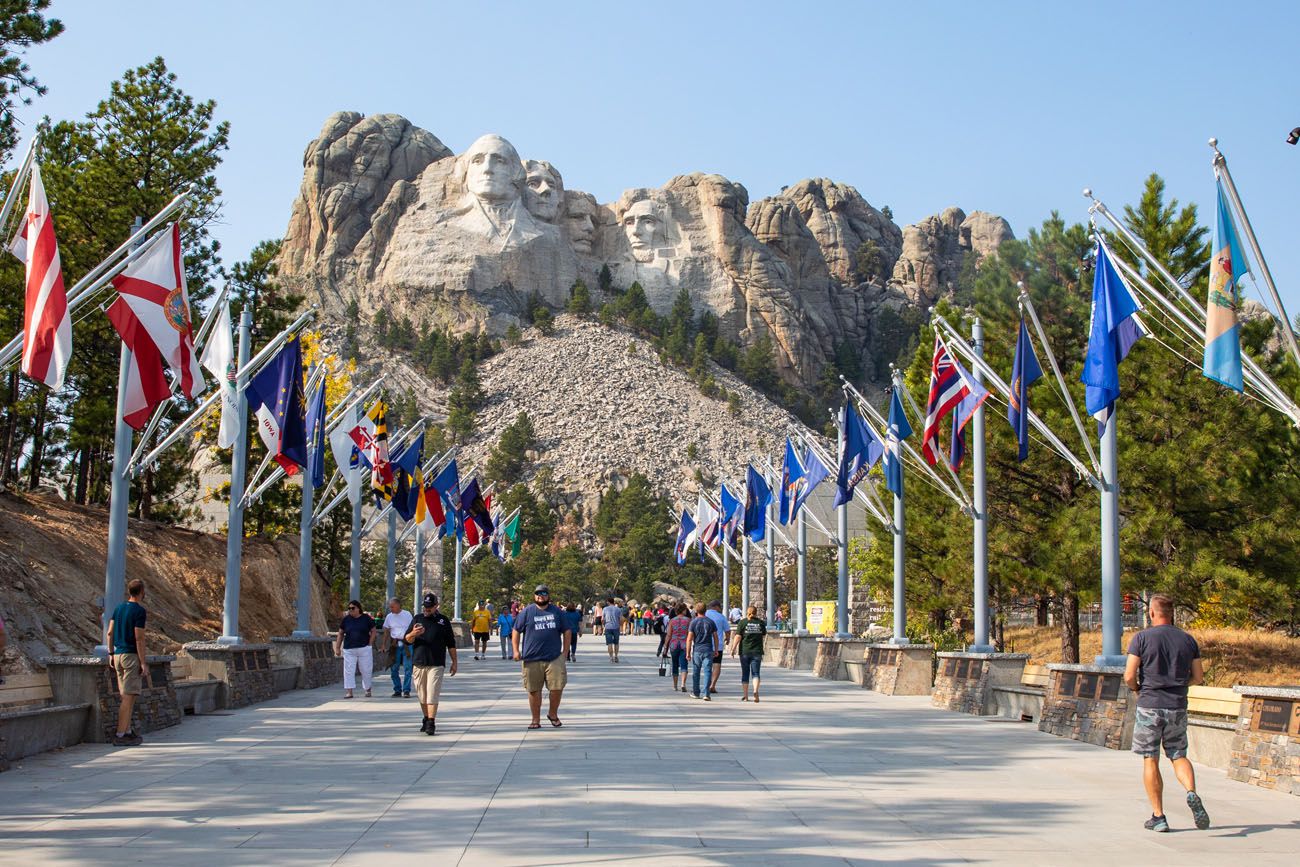 This is the main thoroughfare to the Grand View Terrace. This walkway is lined with 56 flags. They represent the 50 states, the District of Columbia, three territories (Guam, the American Samoa, and the Virgin Islands), and two commonwealths (Puerto Rico and the Northern Mariana Islands) in the United States. 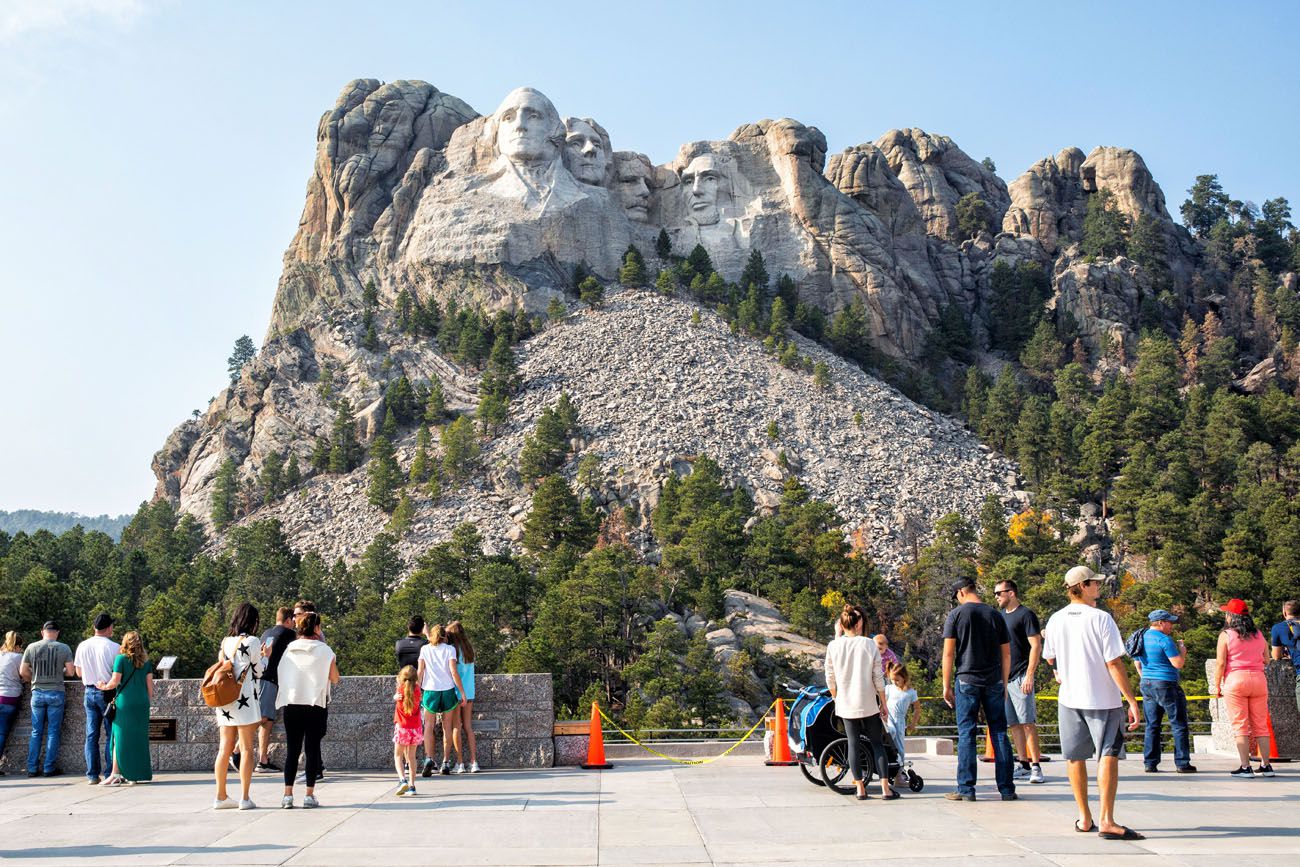 Grand View Terrace is the main viewing platform. From here, you have a clear view of the four presidents. 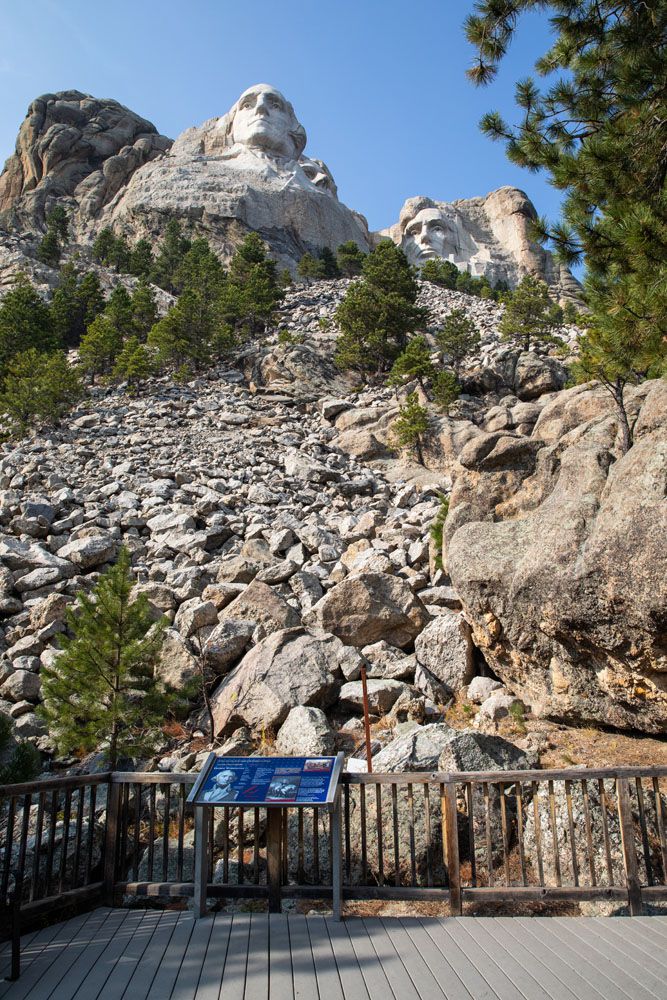 This trail leads up to the base of the mountain for close-up views of the sculpture. Along the way, you can learn more about the four presidents on the informational signs.

This small building is located at the end of the Presidential Trail, before you walk back up to Grand View Terrace. Learn about the tools and techniques used to carve Mount Rushmore. Ranger talks are held daily in the summer months. You can see the schedule at the Information Center (when you first enter the park) or at the Visitor Center. 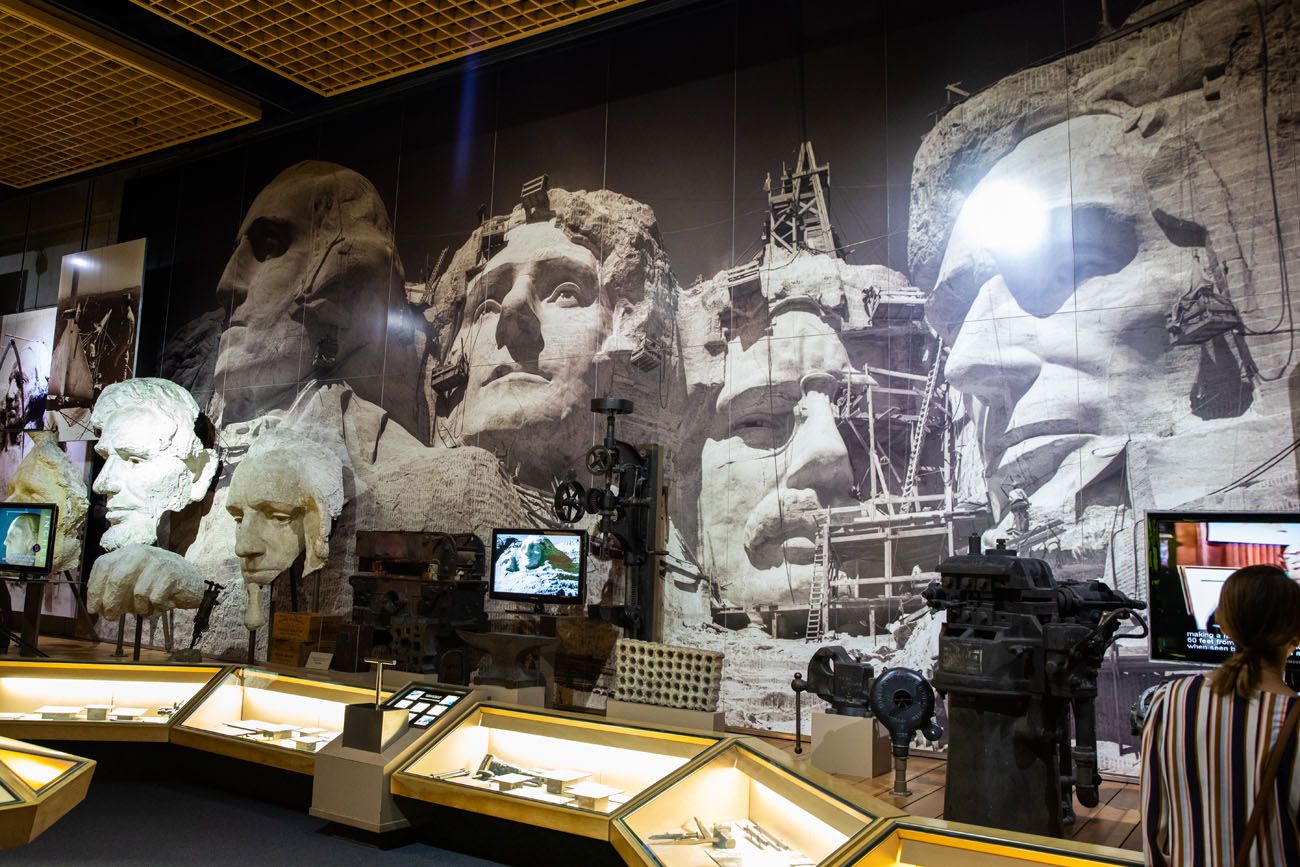 Located beneath Grand View Terrace, you can learn more about the history and construction of Mount Rushmore in the exhibits. There is a 14-minute film that explains how Mount Rushmore was created.

Have a Scoop of TJ’s Ice Cream

Not only was Thomas Jefferson the main author of the Declaration of Independence but he is also credited with having the first ice cream recipe in the USA. You can sample this ice cream at Carver’s Marketplace and the Memorial Team Ice Cream Station.

From late May through the end of September, you can watch the 45-minute ceremony as the lights turn on, illuminating the faces of the four presidents. From late-May through mid-August, this is held at 9 pm and from mid-August through September 30, the lighting ceremony is held at 8 pm. 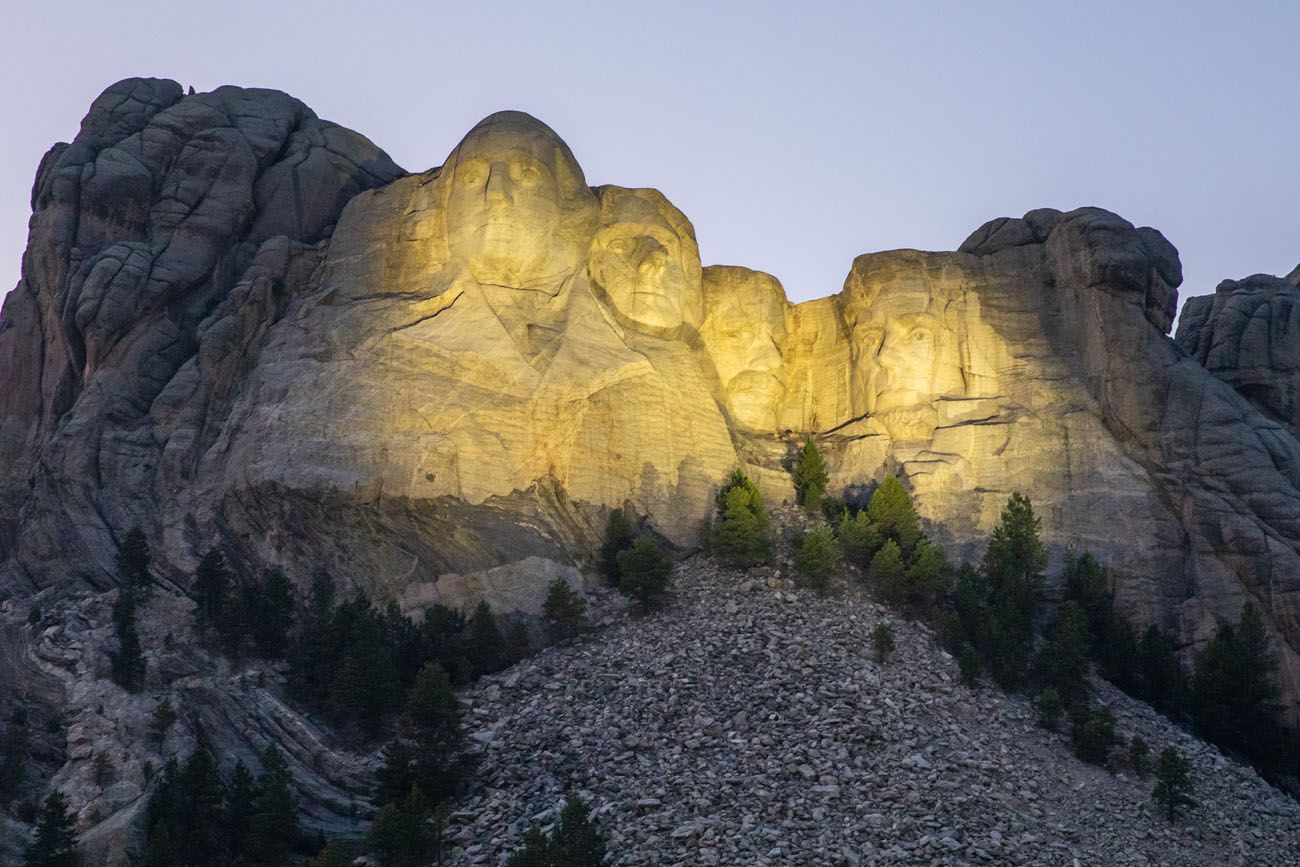 For the remainder of the year (October through late May) the sculpture is still illuminated, but there is no ceremony.

Pro Travel Tip: You can visit Mount Rushmore twice on the same day with one entrance fee. If you visit during the day, save your ticket for your evening return.

4. Take a Tour of Mount Rushmore

To make the most of your visit, consider taking a tour of Mount Rushmore.

Ranger guided tours are offered daily. These range from 15 to 30 minutes and cover topics such as the history and construction of Mount Rushmore. Schedules are posted at the Information Center (they are not available online). Learn more here.

If a ranger guided tour is not your thing, you also have the option to take an audio tour or a multi-media tour of Mount Rushmore. These range from $6 to $8. Learn more here.

5. How Much Time Do You Need at Mount Rushmore?

On the quickest of visits, 30 minutes is really all you need to visit Mount Rushmore. You can simply walk up the Avenue of the Flags, take in the view from the Grand Terrace, take your photos and snap your selfies.

With one to two hours, visit the Grand View Terrace, walk the Presidential Trail, watch the film about the construction of Mount Rushmore in the Visitor Center, and satisfy your sweet tooth with some ice cream at Carver’s Marketplace.

With more time, join a ranger program. There are numerous programs held throughout the day. Learn more here.

6. When is the Best Time of Day to Visit Mount Rushmore?

Mount Rushmore is open 365 days per year, even Christmas. However, on Christmas Day, all buildings will be closed but the park will be open. 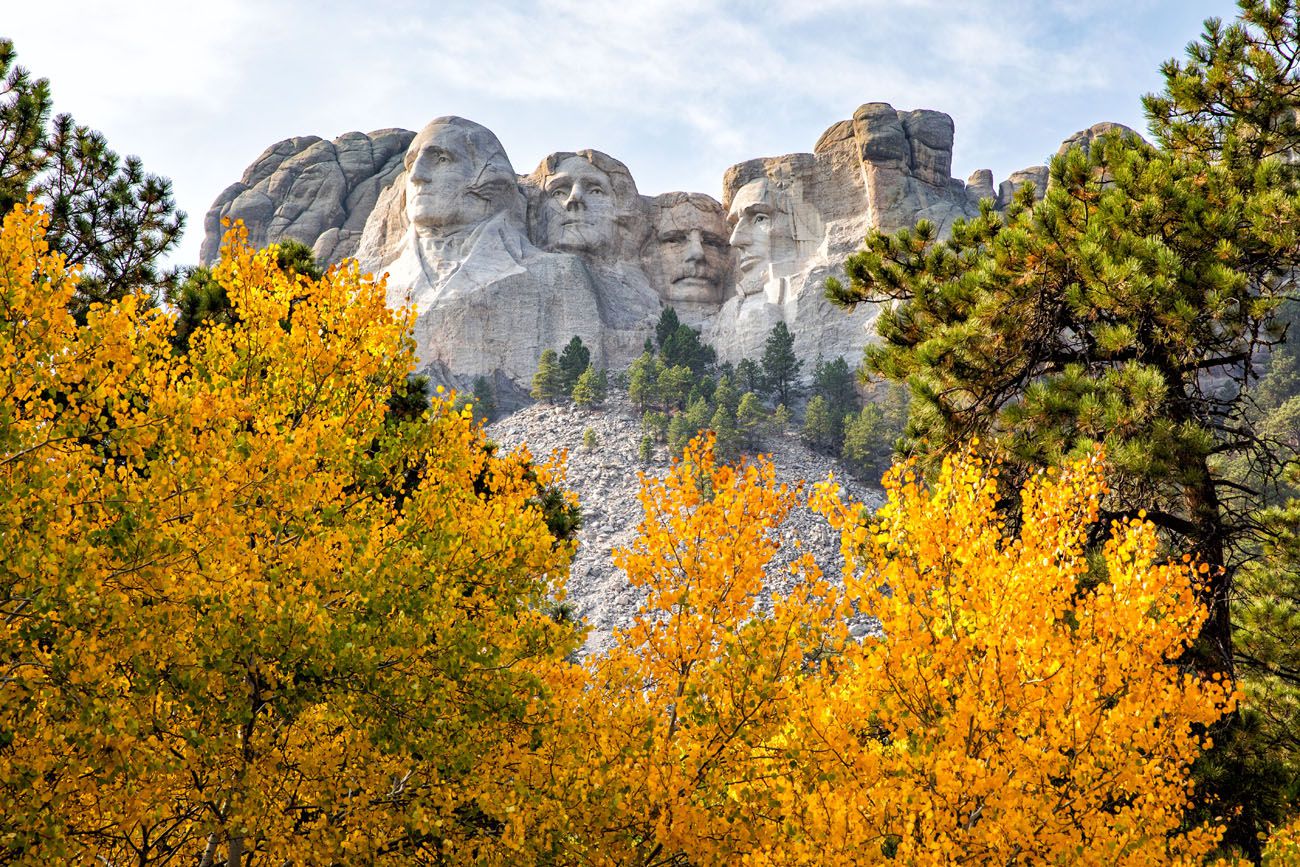 7. When is the Best Time of Year to Visit Mount Rushmore?

In general, spring and fall are the best times to visit Mount Rushmore. Temperatures are mild and crowds are relatively low.

We visited Mount Rushmore on October 9, peak season for fall colors in the Black Hills of South Dakota, as you can see from our photos. Late September through early October is a fabulous time not only to visit Mount Rushmore but the Black Hills of South Dakota. The weather is mild, rainfall chances are low, and you get to capture the fall colors in your photographs.

Mount Rushmore is open all winter. It will be cold with a possibility of snow, but this is the least crowded time to visit Mount Rushmore.

8. How Much Does It Cost to Visit Mount Rushmore?

There is no entrance fee to enter Mount Rushmore. However, you do have to pay a $10 parking fee per vehicle.

When you arrive to Mount Rushmore, you will drive through a ticket booth. Take the parking permit and then park in one of the six parking garages.

You will pay your fee at one of the automatic ticket machines that are located throughout the park. You will see these machines in the parking garages and at the entrance into Mount Rushmore. Insert your parking ticket into the machine, pay your $10 fee (cash and credit cards are accepted), and your validated parking ticket will be given back to you. You will insert this ticket into the machine to exit the parking garage when leaving Mount Rushmore.

Pay your fee at any time during your visit. This can be done before or after you tour Mount Rushmore. But don’t forget to do it. You will not be able to exit the parking garage without validating your parking permit.

The parking permit is valid for one year from the date of purchase. So, if you plan to return later in the day, tomorrow, or three months from now, hold on to your parking permit.

For a unique view of Mount Rushmore, you can see the profile of George Washington from outside of the national memorial. 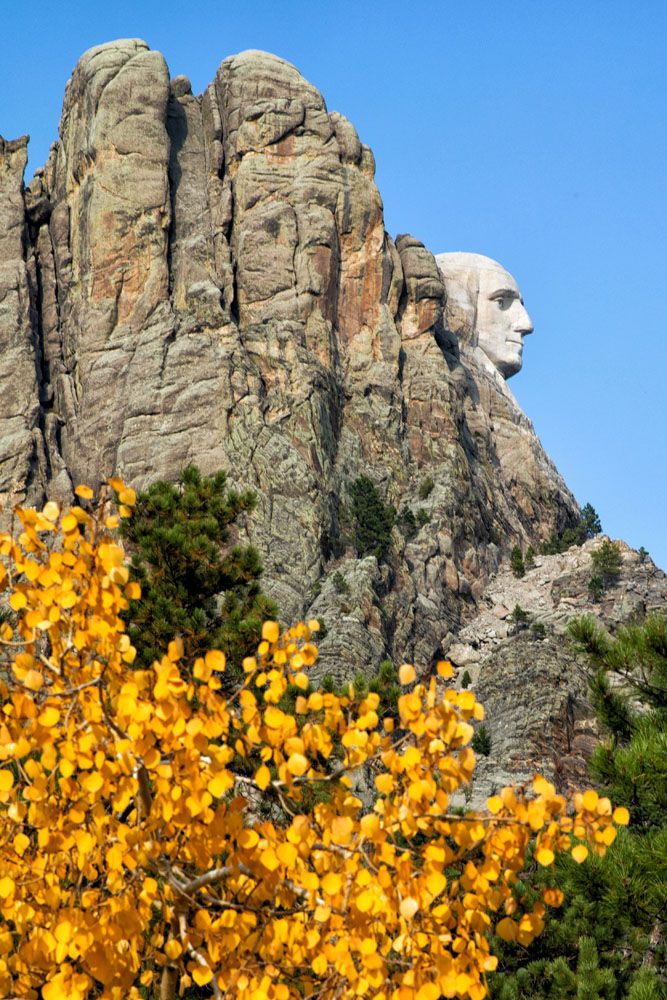 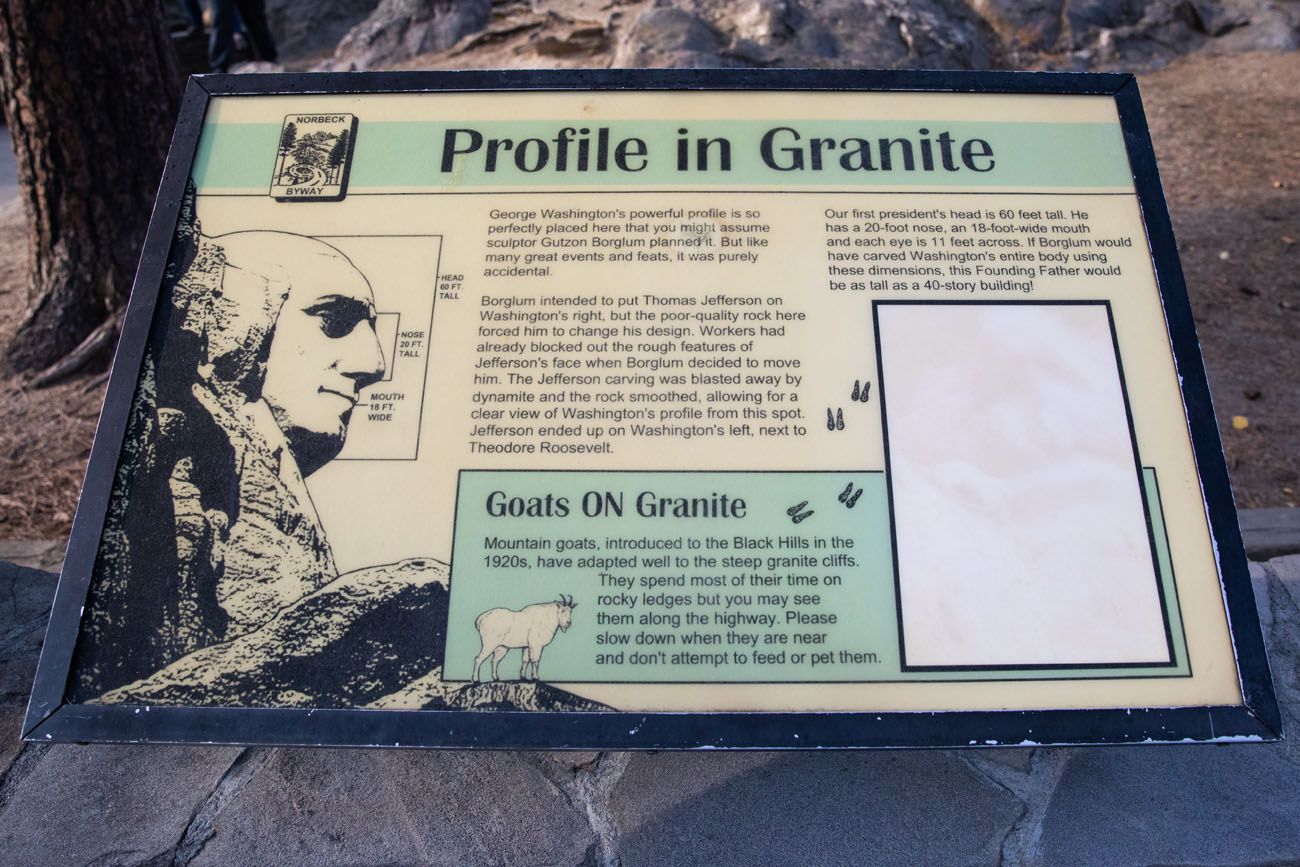 Located on Highway 244, less than a 5-minute drive from the memorial site, you can see Mount Rushmore from the side. Park in the small parking area to see the side-view of George Washington’s face.

To get here, turn right onto Highway 244 when exiting the park and drive 0.7 miles to the turn-out. 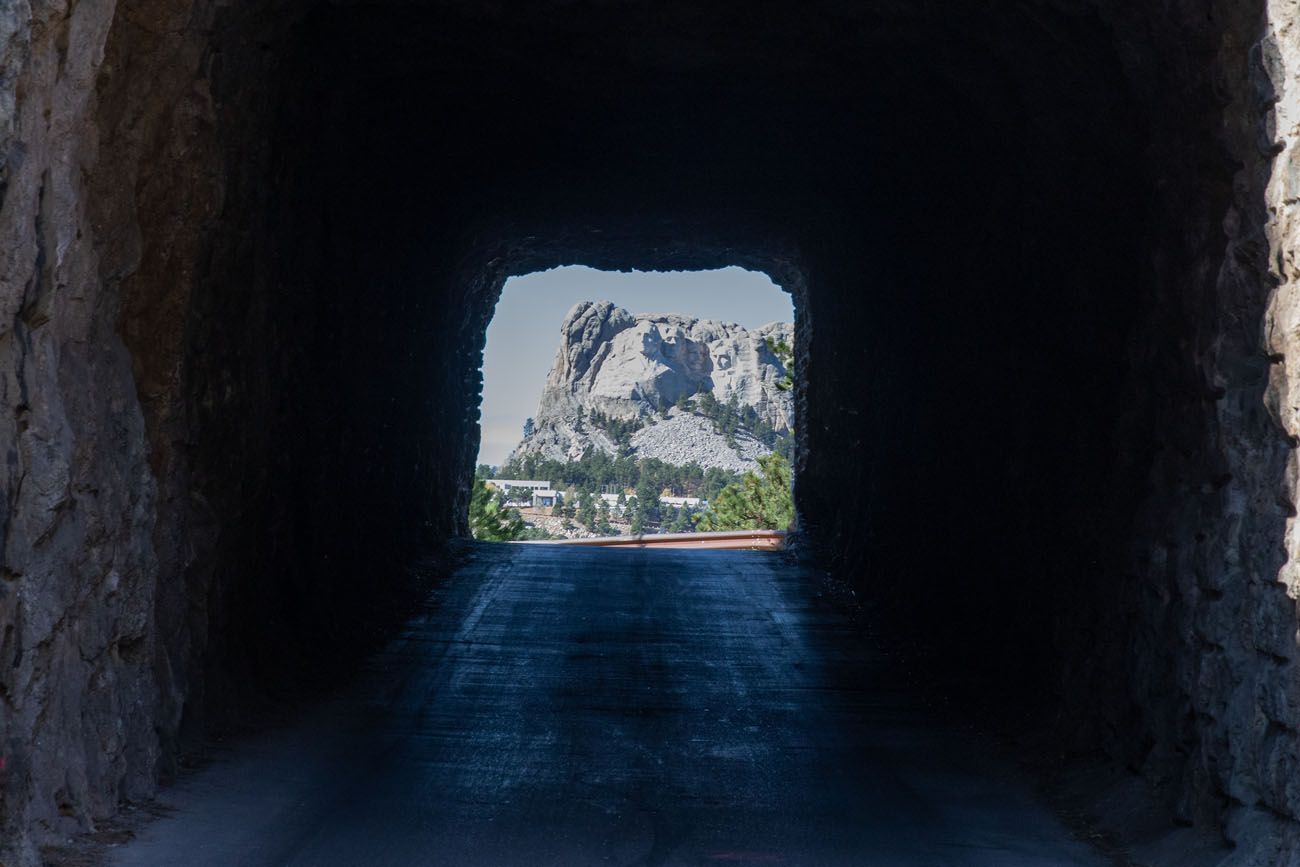 More Things to do in South Dakota

Rapid City and the Black Hills make a great home base for exploring southwestern South Dakota. We spent one week here in October 2020 and had a blast exploring this area. Here is a list of things to do.

For the full list, read our post 15 Things to do in South Dakota near Rapid City. Learn how to put all of this together into one epic one week vacation: One Week in South Dakota: Black Hills & the Badlands

If you have any questions about visiting Mount Rushmore or if you want to share your experience, let us know in the comment section below.

More Information for Your Trip to South Dakota:

If this is part of a bigger road trip through the USA, visit our United States Destination Guide for more inspiration and travel planning tips. 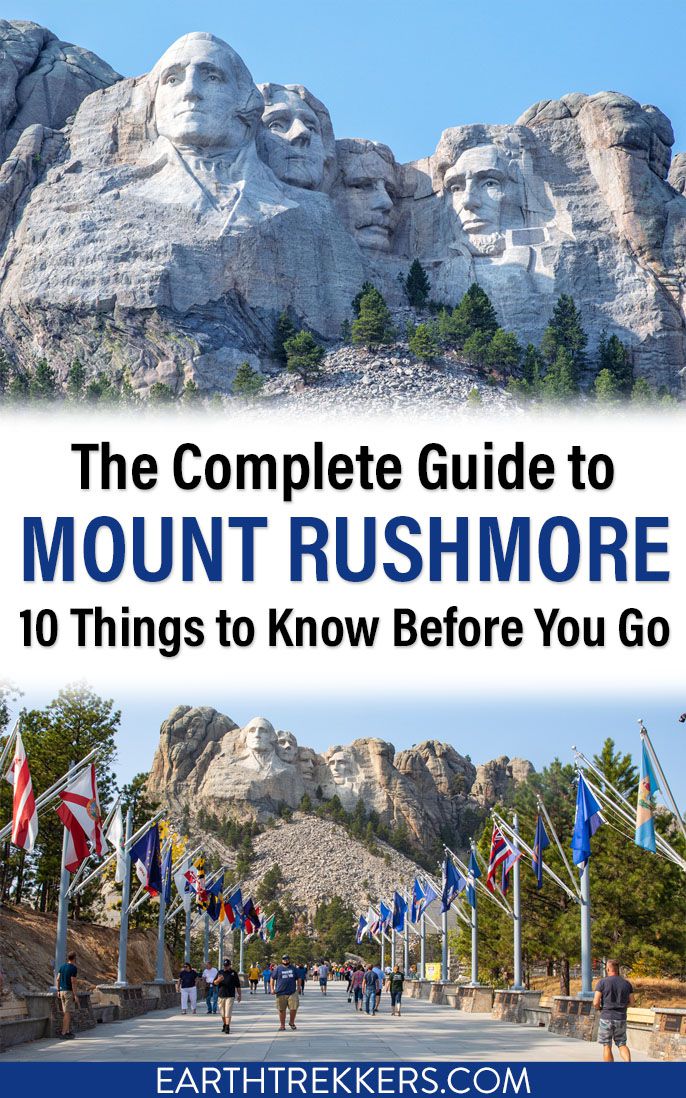