What Traveling Through Asia Has Taught Us 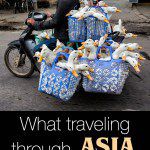 We have now been traveling through Asia for over five months and still have several more to go. It has been quite the learning experience for our family…new foods, new cultures, lots of history to learn about. Most of it has been a wonderful experience although we have had a few difficulties along the way, just to keep things interesting.

We have been here long enough to get a real feel for Asia. In fact, we have spent much more time here than all of our past trips to Europe combined. Being in Asia for this length of time has really allowed us to immerse ourselves in the way of life here. There are many things that are different in Asia than in the US, some good and some bad. Some things we will miss and some we won’t. Here are the things that stand out the most.

This post was written in 2015 during our trip around the world.

What Traveling Through Asia has Taught Us

Ever since entering India we have seen food for sale on almost every street corner. This is where most people eat…seated on small plastic stools at small shops set up along the sidewalks. People working at small restaurants or roadside food carts prepare the food and everyone grabs a seat at the table for their meal. Everyone is happily munching away on pad thai, rice dishes, or soups, conversing with friends and family while they eat. The food is cheap, fast, and very good. In some places, like India and Nepal, we were too worried about food-borne illness to join the crowds, but once we were in Thailand this changed. 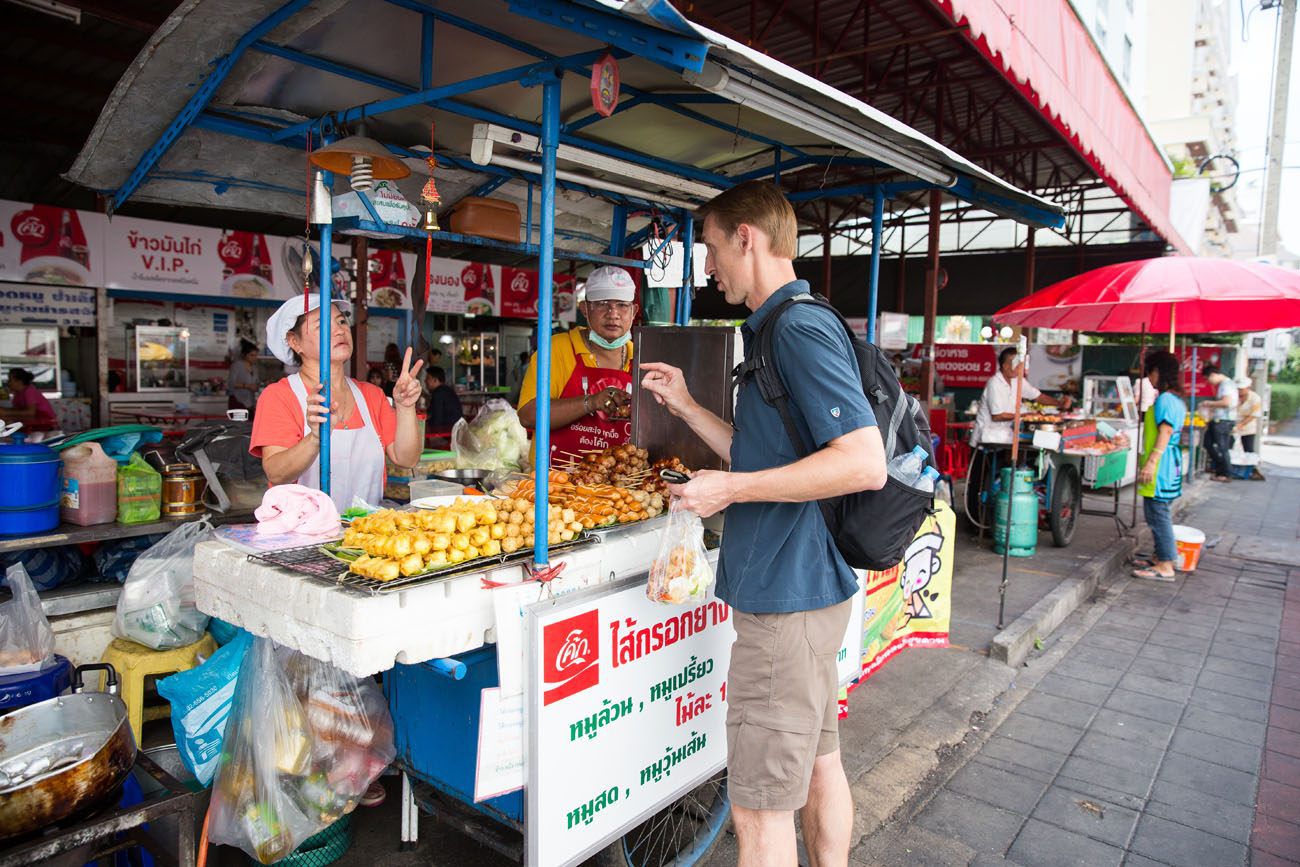 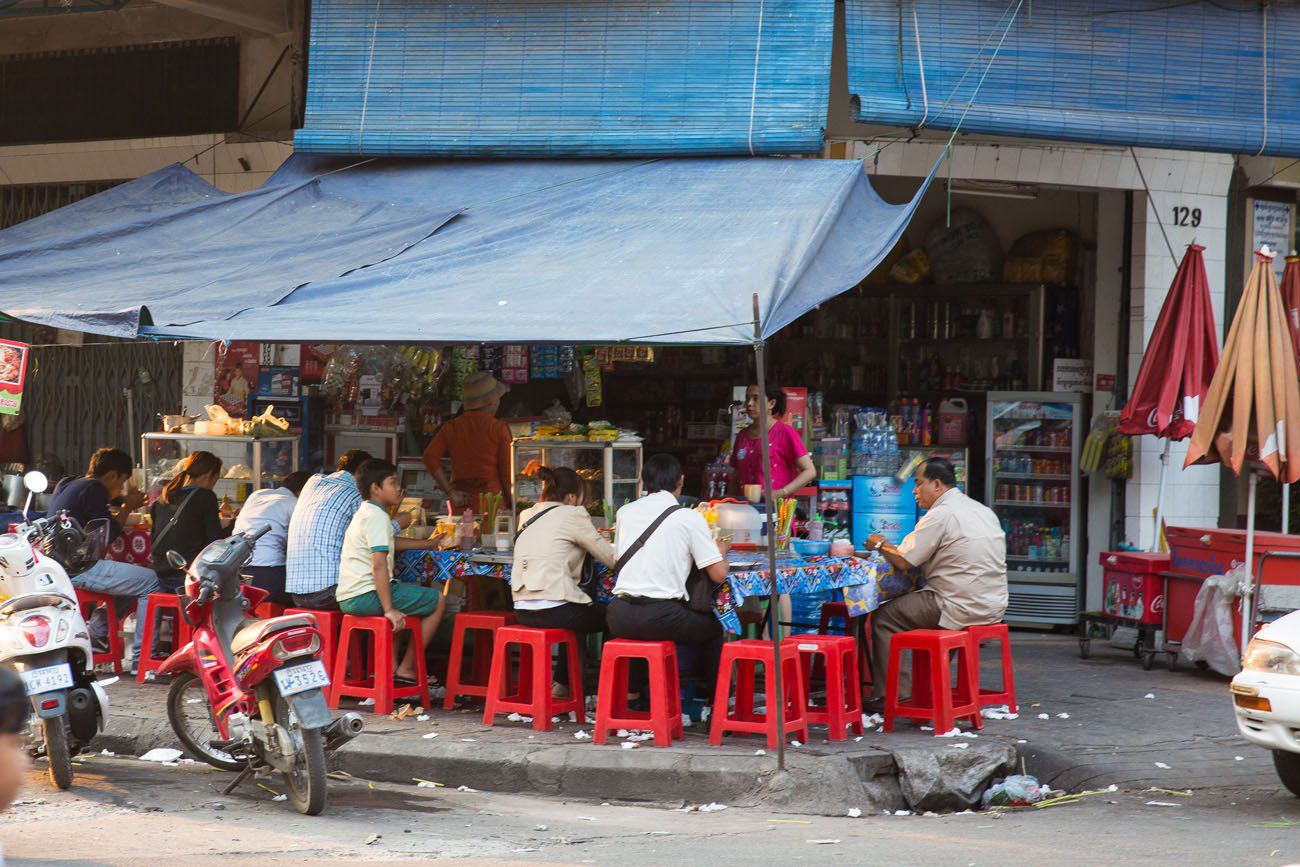 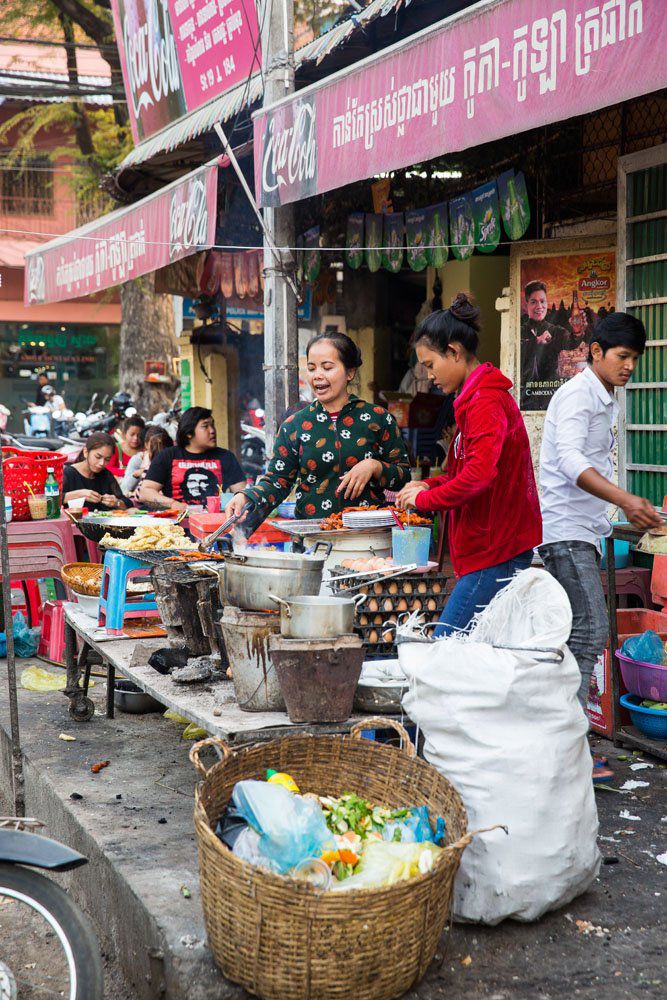 RELATED: Eating (and drinking) Our Way Around Bangkok

Sidewalks are not for Walking

The sidewalks are parking lots for motorbikes, a space for pop up street food cafes, and overflow from shops. It is nearly impossible to walk down the sidewalks here, forcing us into the streets with the chaos of motorbikes, tuk-tuks, and cars.

In many cities, such as New Delhi, Hanoi, and Phnom Penh, walking on the sidewalks was almost impossible. This makes going out for a nice stroll through the city more of a frustrating game of survival just trying to get from one place to another. We chose to get around by tuk-tuk instead, a very cheap method of transportation, with the downside being that we were getting much less exercise than in places like Italy or Germany. 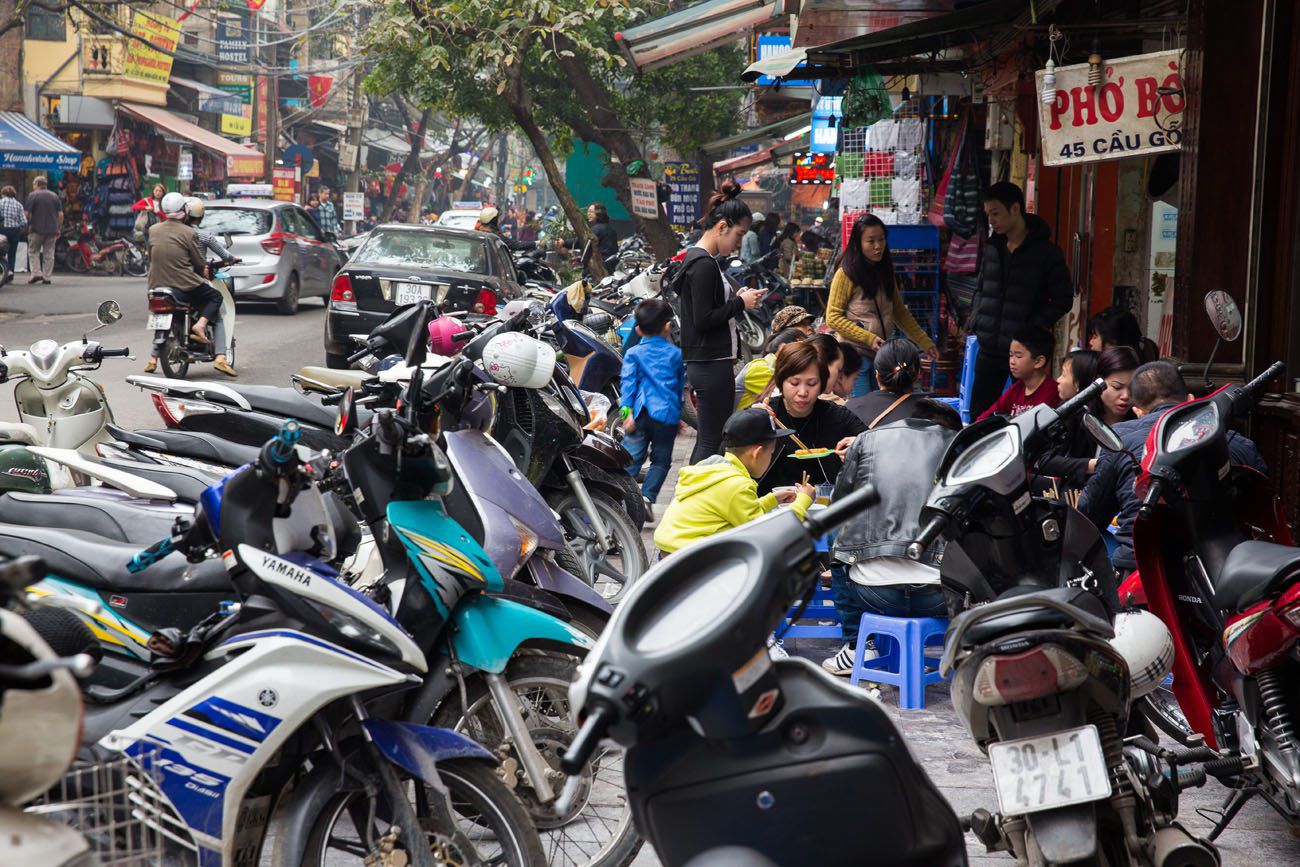 RELATED:  A Photojourney through the Old Quarter of Hanoi

Many Intersections Do Not Have Traffic Signals

Intersections are absolute chaos in some cities. Motorbikes and tuk-tuks approach the intersection and as a group push their way across to the other side. It is fascinating to watch the traffic flow when people are left on their own to negotiate their way through the crowds of people. There is some honking involved, more so to let people know that they are coming rather than as a display of agitation or anger.

At times the intersections would become jammed with motorbikes and never once did we see a display of anger or frustration. People would remain very aloof, let someone pass in front of them, slowly making their way through the intersection, never shouting at the people around them. Everyone is always very calm and good natured, it’s just the way it is here. 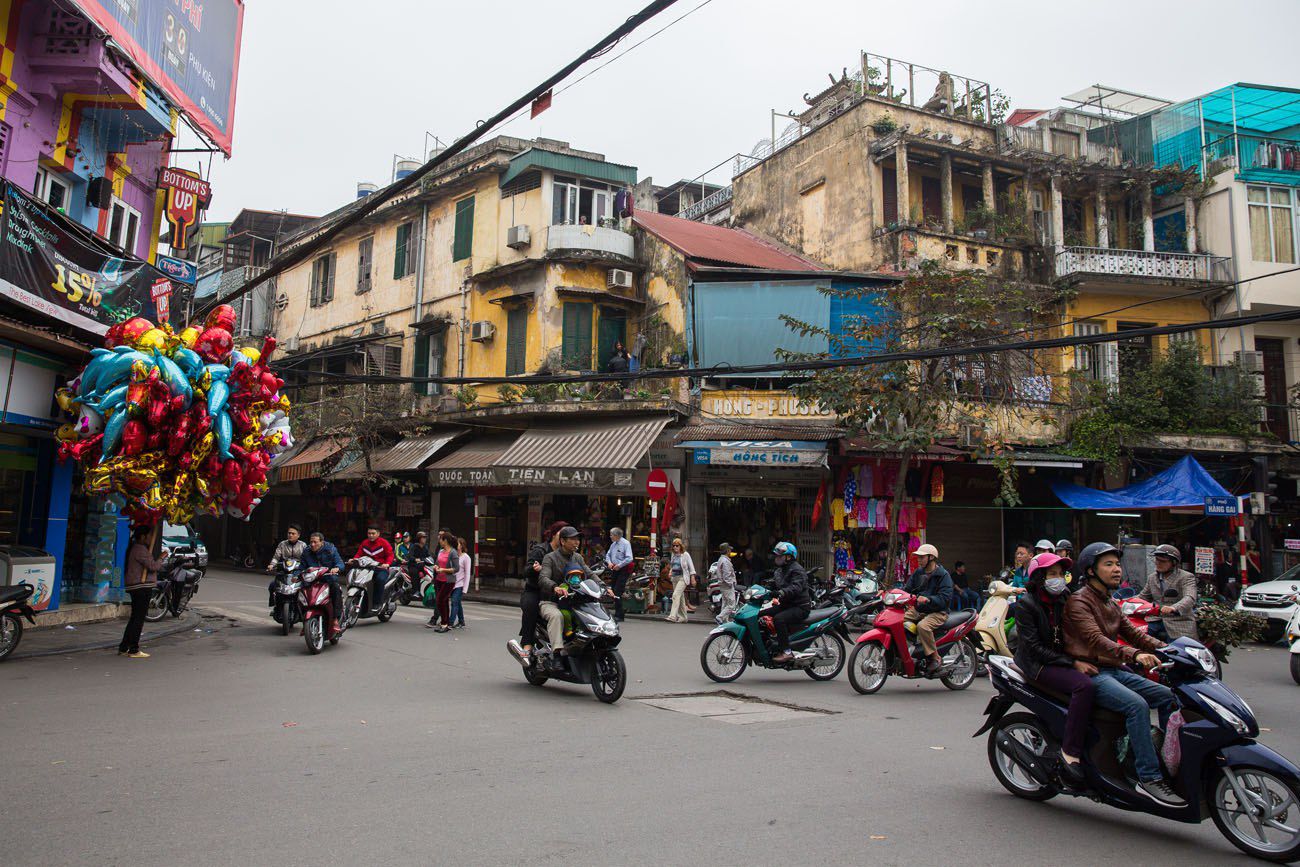 Crossing the Street is Tons of Fun

We love crossing the streets. There usually are no traffic signals which means there are no pedestrian signals, either. If you stand at a crosswalk waiting for a clearing you will probably grow gray hair before you get a chance to cross to the other side. So that means you must have faith that oncoming traffic will not plow into you as you make your way out into the street.

We wait for a “semi-clearing,” then step out into the street together, as there is always safety in numbers. The four of us inch our way across the street, dodging motorbikes and other vehicles, and before we know it, we are safely on the other side, back on another crowded sidewalk with no room to stand! Never once have we been hit, a very good thing, that’s for sure.

So, what are the best countries for exciting street crossings? Vietnam is the best with its multitude of motorbikes everywhere, followed by Cambodia. Playing Frogger when crossing the street is something we are really going to miss.

Tuk-tuks are cheap, can be found almost anywhere, and are an excellent way to tour the cities.

Every country has its own style of tuk-tuk. Cambodia is our favorite; here a motorbike pulls something that resembles a carriage. As we would travel down the roads the breeze would keep us cool and we had completely unobstructed views.

Traveling by tuk-tuk is possible here in Southeast Asia, in an area where it is always warm and has a very long season with almost zero rainfall.

In Vietnam, Almost Anything is Transported on a Motorbike

Motorbike is the most common means of transportation in Vietnam, although motorbikes are very common in Cambodia as well. Motorbikes have many advantages over cars: they are cheap, fuel efficient, and can be parked right on sidewalks.

One family may own a motorbike, so this motorbike is used to transport up to four people, carry groceries, and anything else they may need. We have seen motorbikes carrying huge bags of trash, pigs in metal crates, ducks and chickens on their way to the market, trees, giant picture frames, and so much more. 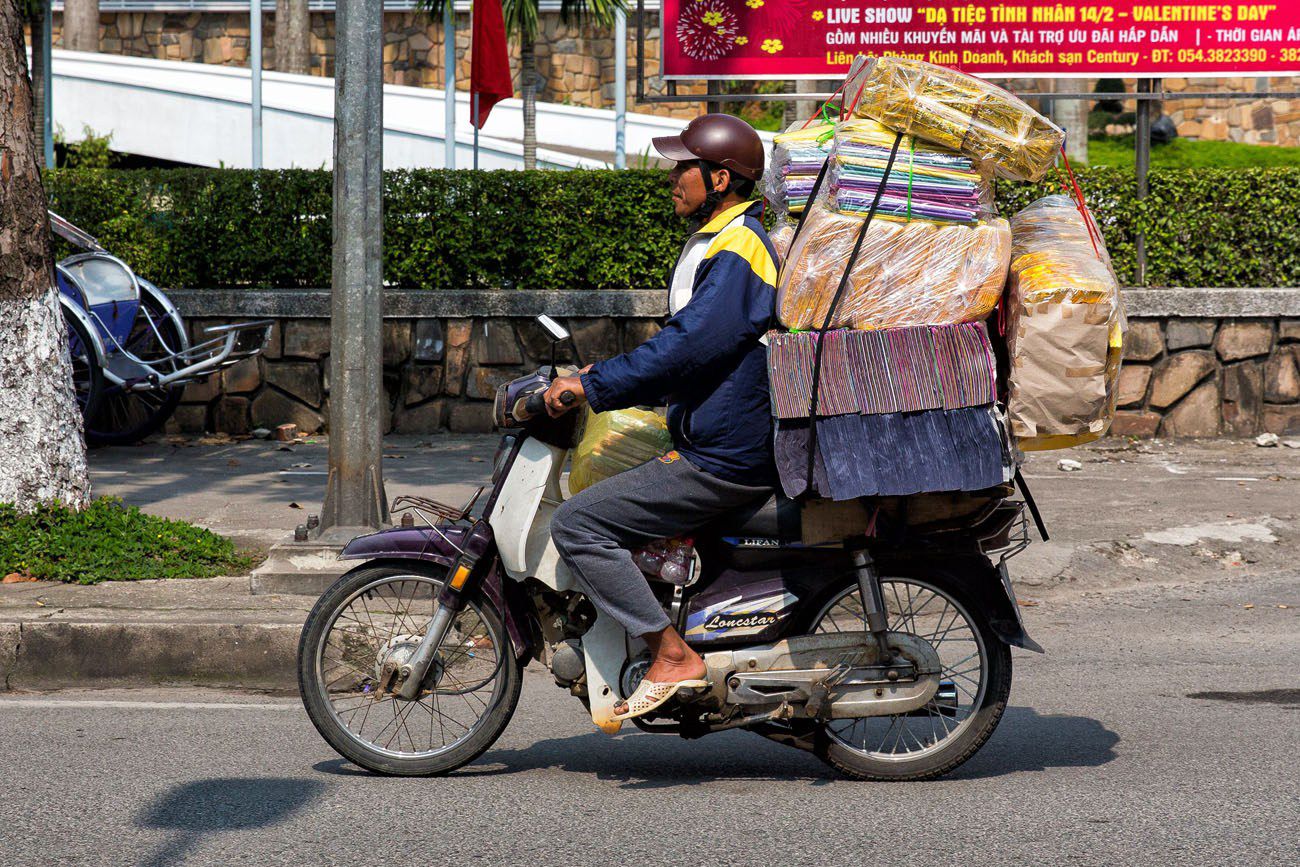 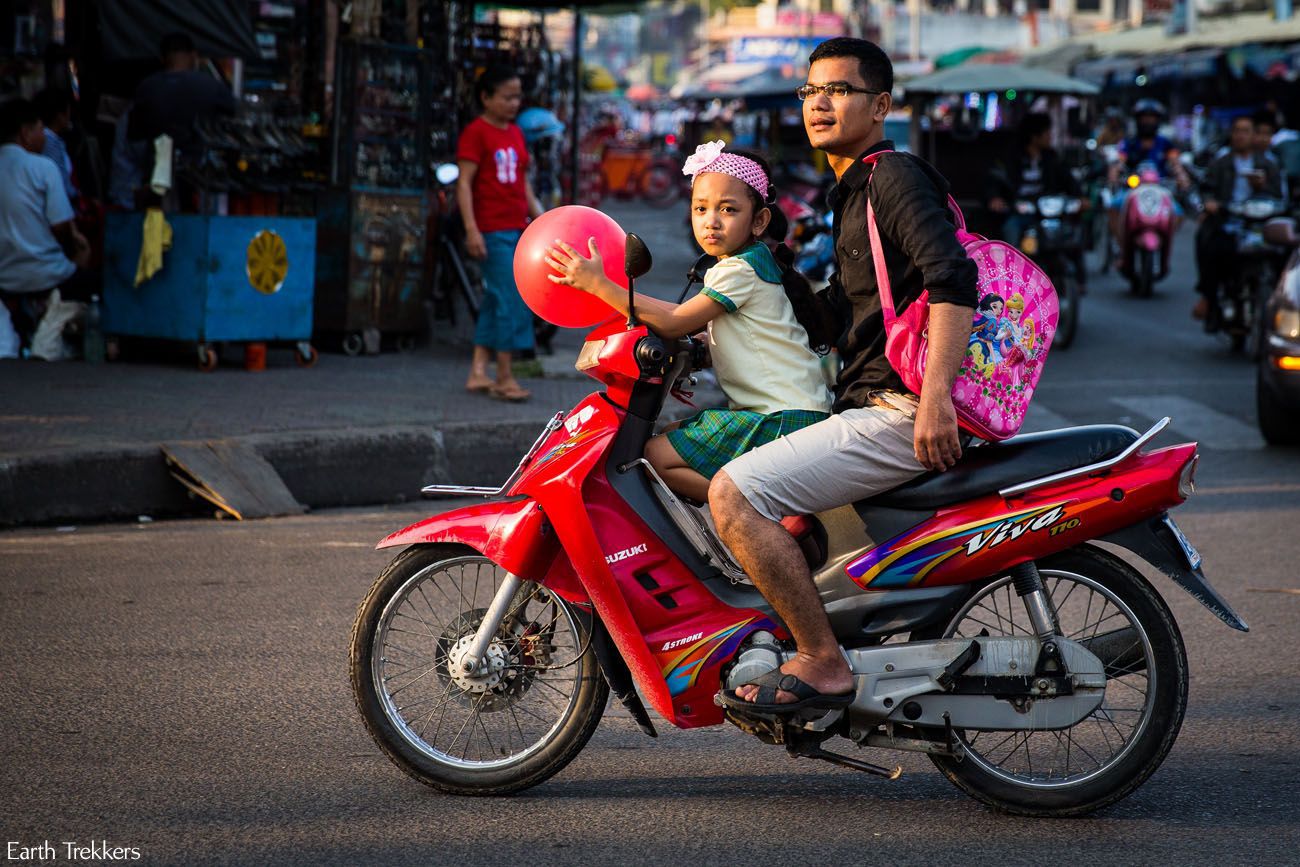 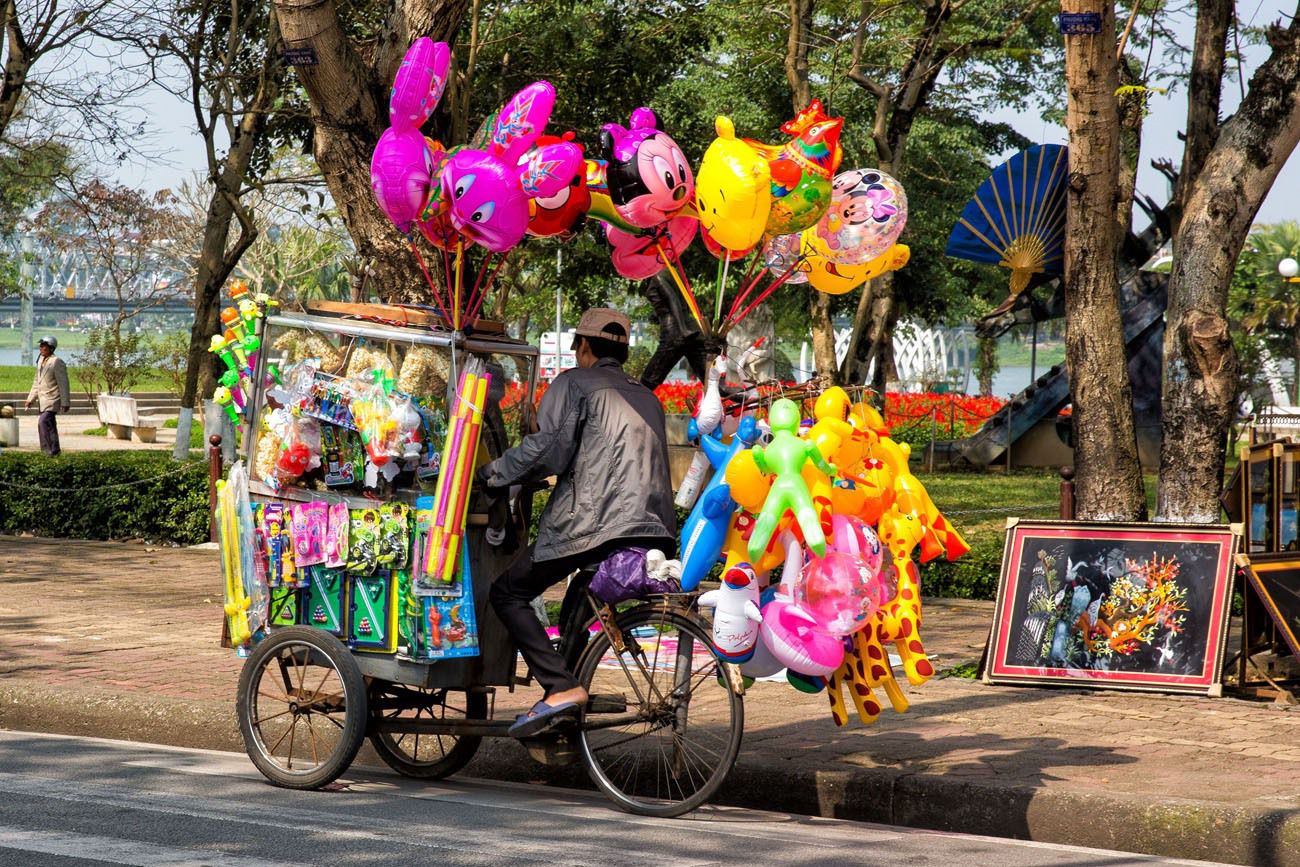 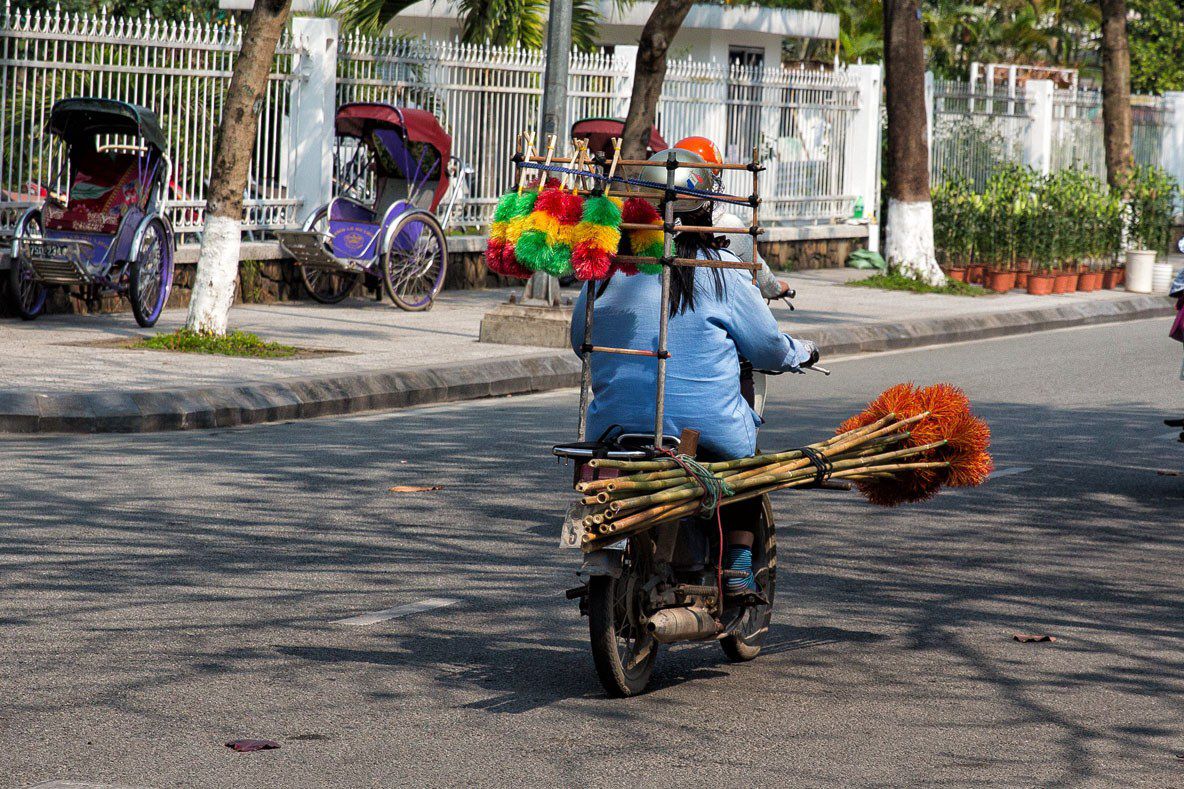 Getting Laundry Done is Cheap!

What’s one of the best things about traveling through Asia? Having laundry done.

Hotels will do our laundry for a small fee, ranging anywhere from $4 to $8 for a week’s worth of laundry for our family of four. At 9 am I drop off our overflowing bag of dirty clothes at the hotel reception, and at 6 pm they are clean, neatly folded, and sitting on our bed. I love it! It sure beats washing clothes in the sink or sitting at laundromats for three hours at a time!

Yup! In Cambodia, the primary form of currency was the US dollar. It is so strange to go to an ATM in a foreign country and withdraw US money, especially when we haven’t used US dollars in so long.

Also, when we crossed borders from one country to another, say Thailand into Laos, our visa on arrival fee had to paid in brand new, crisp US dollars.

There is a Such Thing as Lucky Money

One of the best times of the day to make a purchase, or so we were led to believe, is the early morning. Shopkeepers like to make a sale early because they feel that it will make them lucky for the rest of the day. We would make our payment and the shopkeeper would take the bills we paid with, tapping them on their remaining items for sale. Lucky money!

We knew that we would eat strange food while in Asia although I never expected to see things like scorpions and tarantulas for sale for consumption.

While in Bangkok, when we saw our first scorpions for sale, we were all over that! Eating a scorpion…awesome! It tasted so much better than expected…like crunchy bacon and liver. I would definitely eat a scorpion again.

In Cambodia, Tim and I both ate tarantulas. This was a little different. Let me just say that I am afraid of spiders. Never did I think that I would eat one. Tarantulas are much less terrifying when they are fried to a crisp but it was still terrifying biting into one. Eating a tarantula honestly did gross me out, but I did it.  Tim did it as well, eating the spider in almost one giant bite. You go, Tim! 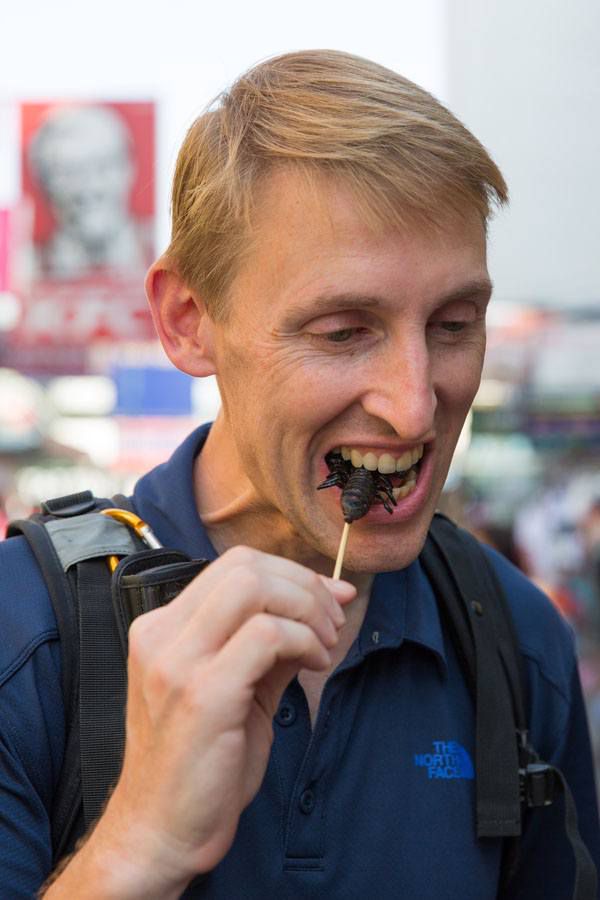 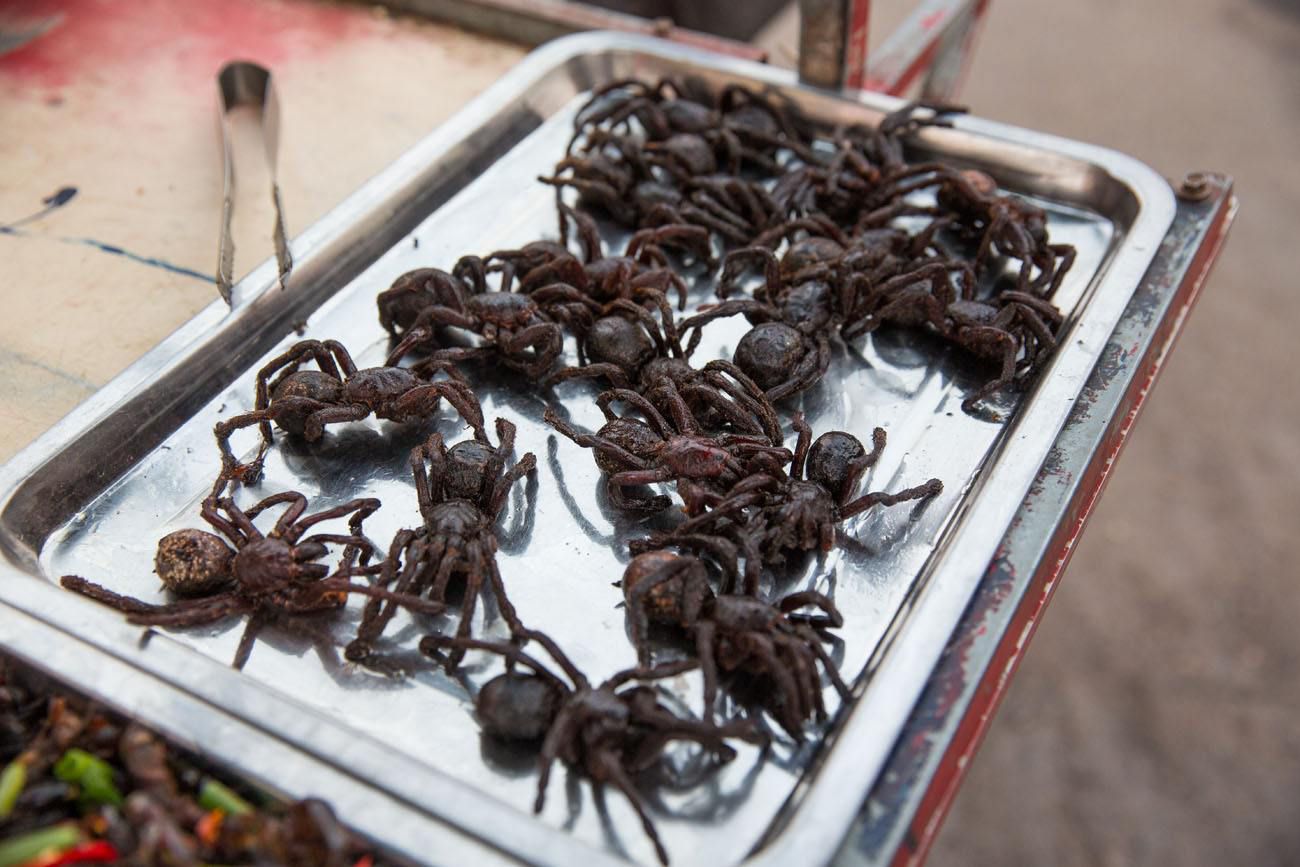 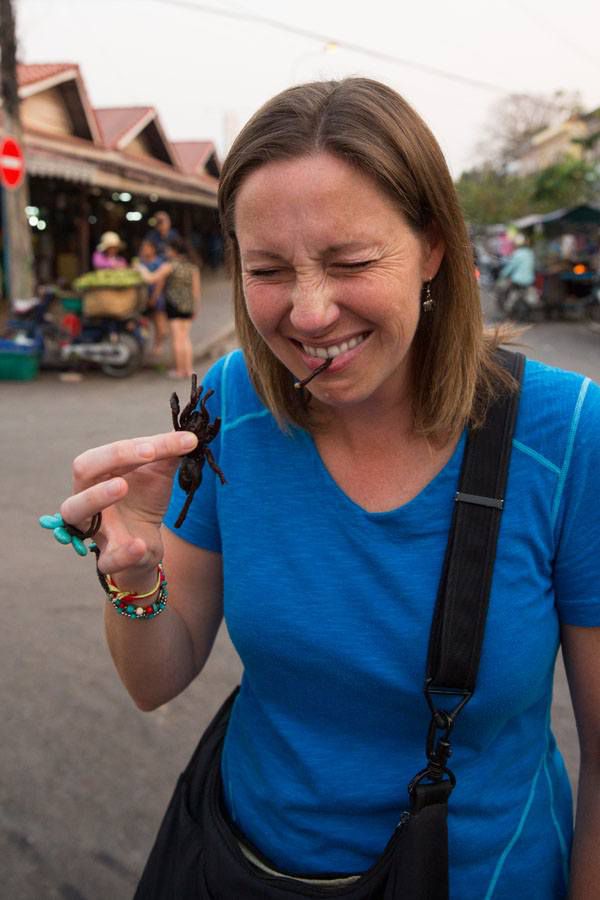 Some Food Choices are a Bit Odd

In Thailand, we saw red beans and corn a lot in the dessert section of menus. Our hotel in Bangkok provided free yogurt every morning. Most flavors were the typical flavors of berries, vanilla, or banana, but there was one flavor not so appealing…yogurt flavored with corn and red beans. Really? I had to try it! Let’s just say that I would eat a scorpion again, and maybe even a tarantula, before eating another bean and corn yogurt. 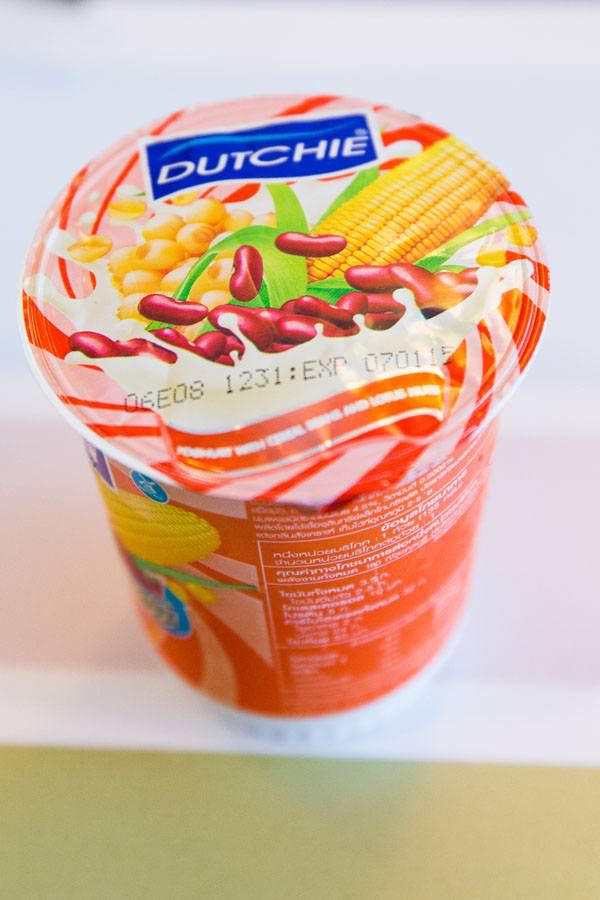 Ever Hear of a Wet Floor Bathroom?

I am sure you have heard of the squat potty, that dreaded little hole in the floor that is Asia’s form of a toilet. We all perfected the art of using the squat potty in Nepal and it is no longer a thing to be avoided. Surprisingly, once we entered Myanmar, we have barely seen the dreaded squat potty. Even small bus terminals have western style toilets. I think I saw more squat potties in Italy than in Cambodia, and that came as a total surprise!

Many bathrooms here are a “wet floor bathroom.” This means the bathroom has a shower head in the middle of the room; the bathroom is the shower.  The entire floor gets wet, the toilet gets wet, even the sink can get wet. Tyler pointed out an advantage to us one day…he could use the toilet and the shower at the same time. LOL!

OK, here’s one of my personal favorite differences between Asia and the US: most medicines are available over the counter and there is a pharmacy on almost every street corner.

It is so convenient to walk into a pharmacy, tell the pharmacist that you need a Z-Pack, and one minute and $2 later have the desired medication. This never happens in the US and it was a huge advantage to get medicine cheaply and easily when necessary. We only needed medication twice and I loved this convenience. 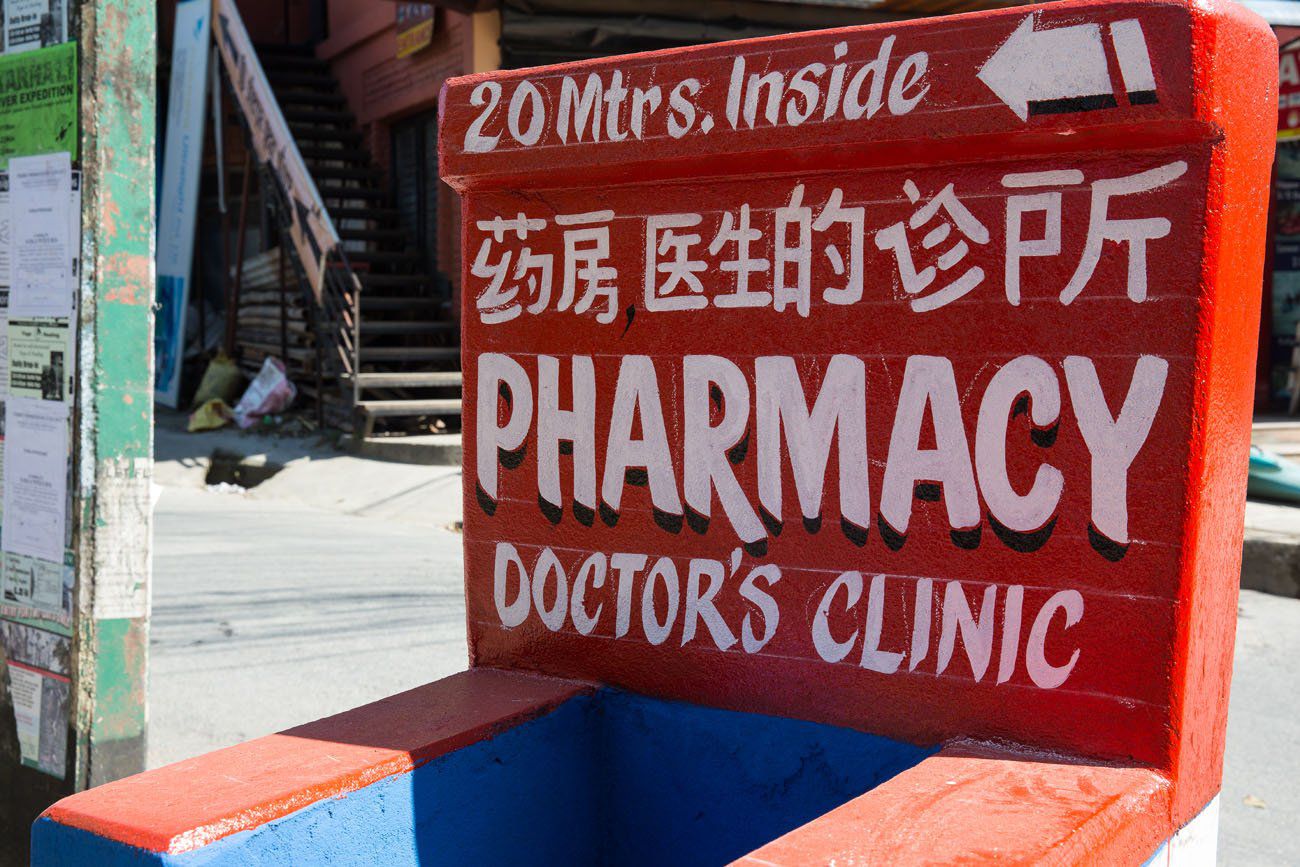 And finally, you can’t tour Southeast Asia without ever getting on at least one long bus ride.

For us, when we were first in Nepal, the long bus rides were almost a novelty. Taking that 8 hr bus ride to go only 200 km on winding mountainous roads with the brakes squealing constantly seemed almost fun. 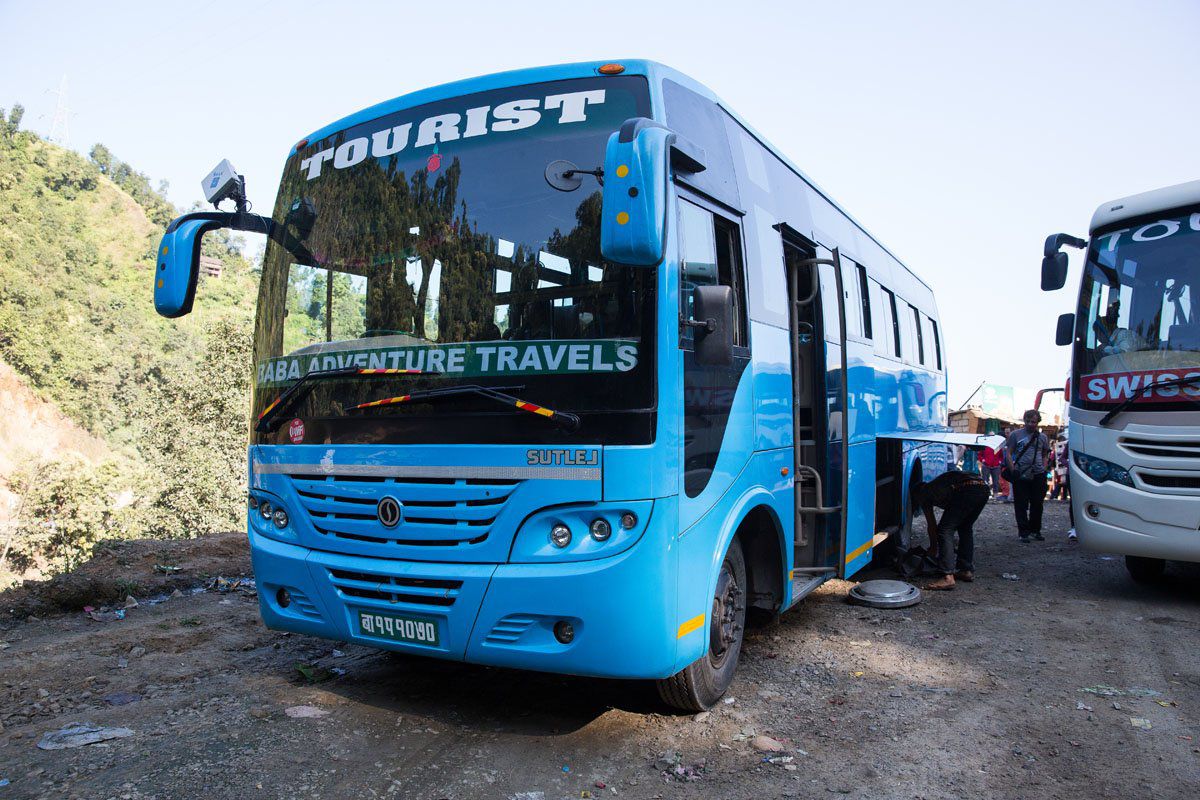 Traveling this way made us feel like true travelers.  However, the more we did it the more we disliked it. Now, I almost dread those long bus trips. Sometimes they take all day and somehow leave you feeling exhausted once you get to your destination, even though you just sat on your butt the entire 8 hours. Why is that?

More Places to Visit from Around the World

TRAVEL INSPIRATION: For more travel ideas, here are 10 unique destinations to put on your travel wish list and 10 bucket list destinations from around the world.

TRAVEL QUOTES: Here are 60 travel quotes to feed your wanderlust. 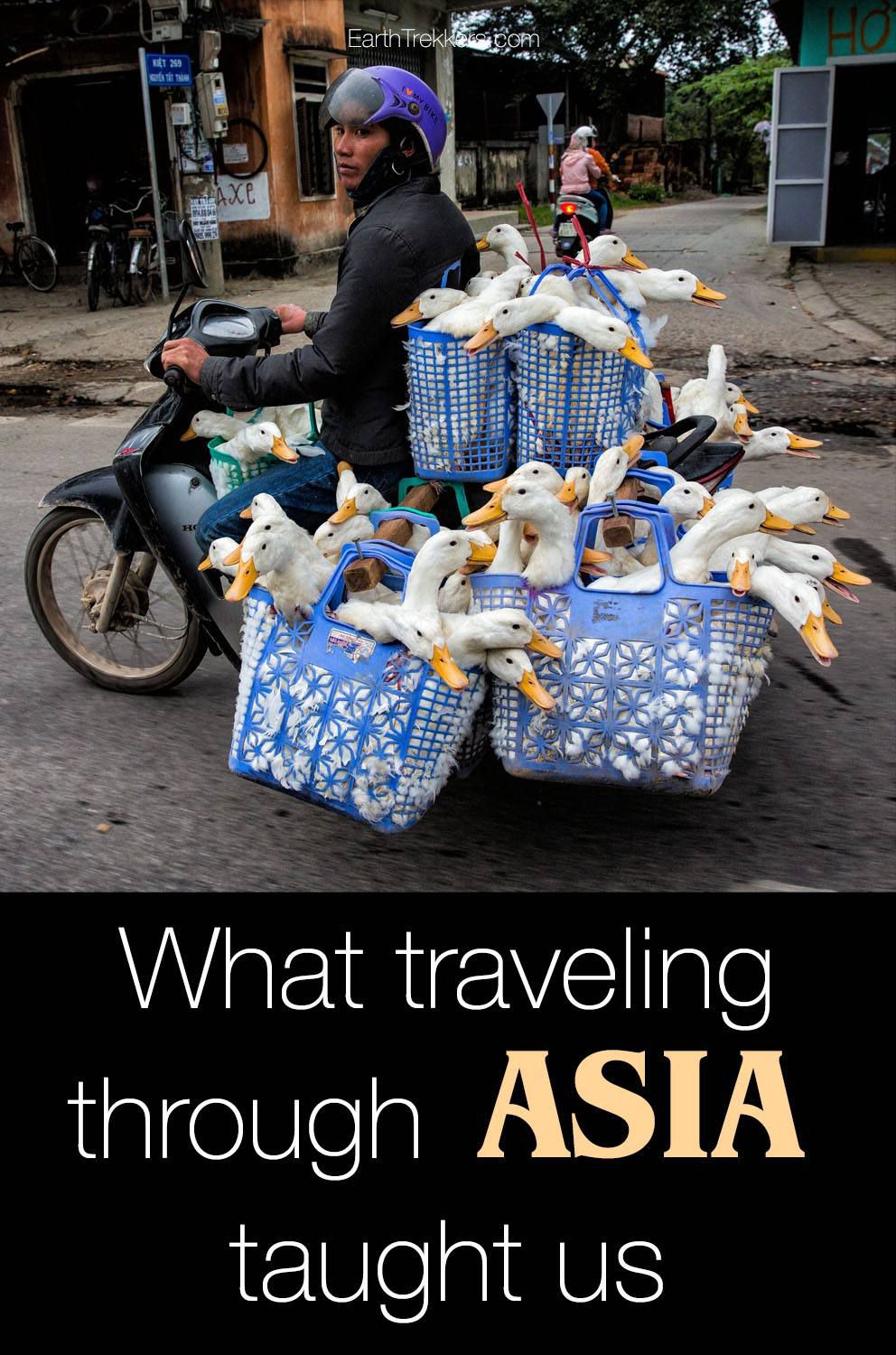