San Gimignano: Photo Tour & the Best Things to Do 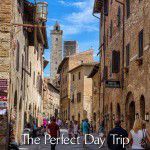 Tuscany, Italy is known for its wine and splendid scenery, and we loved the time we spent here.  The hill towns of Tuscany are small, walled, medieval towns perched on hilltops overlooking the countryside.  Their views are stunning, their streets are a joy to stroll through, and the wine tastings are phenomenal.  We visited several hill towns, and the very popular San Gimignano was one of our favorites.

If you are touring Tuscany and are trying to decide which hill towns to visit, consider San Gimignano! This town is very popular for good reason.

Best Things to do in San Gimignano

The Towers of San Gimignano

We were able to climb the Torre Grossa, also known as the Bell Tower, and the views were some of the best of Italy so far. 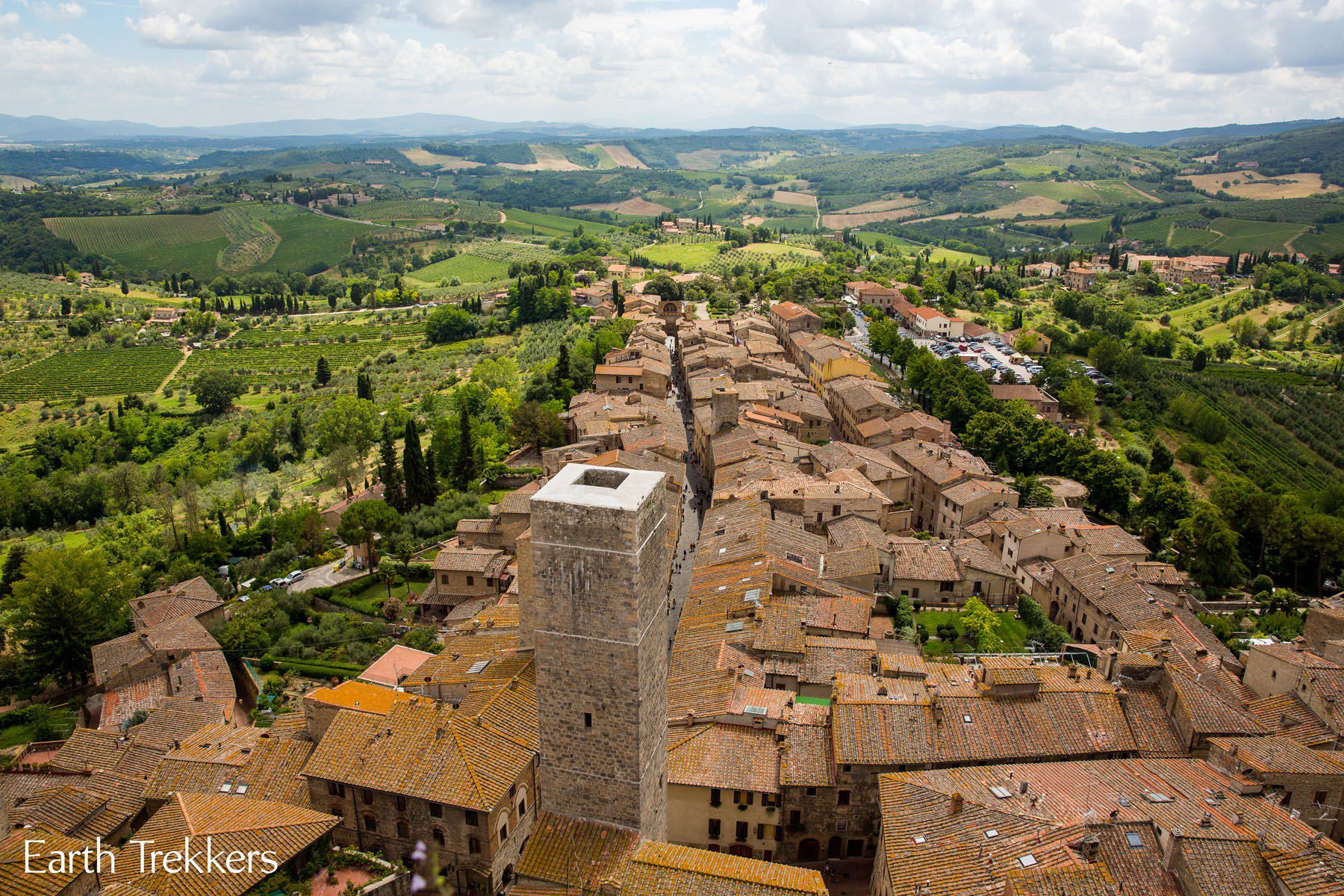 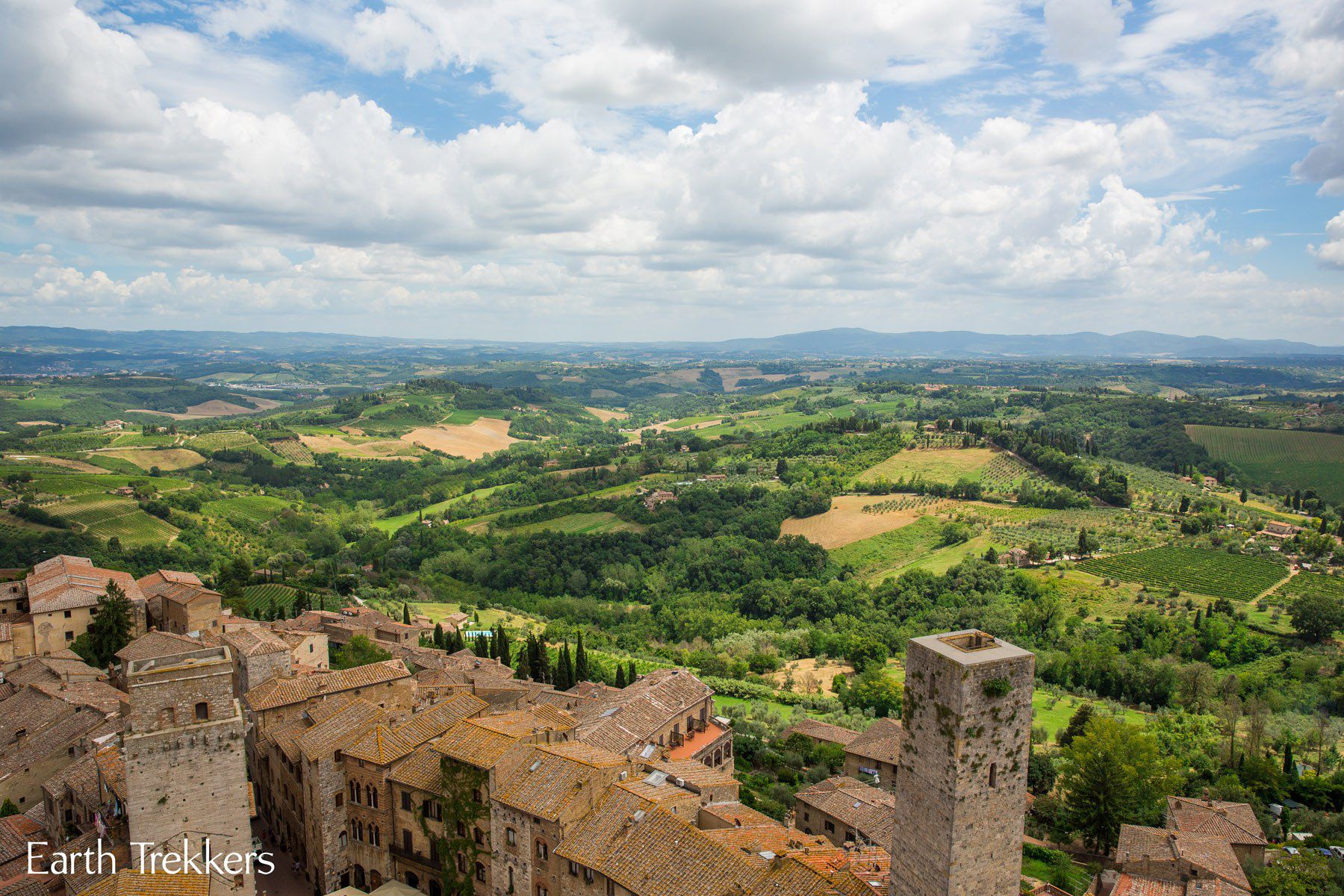 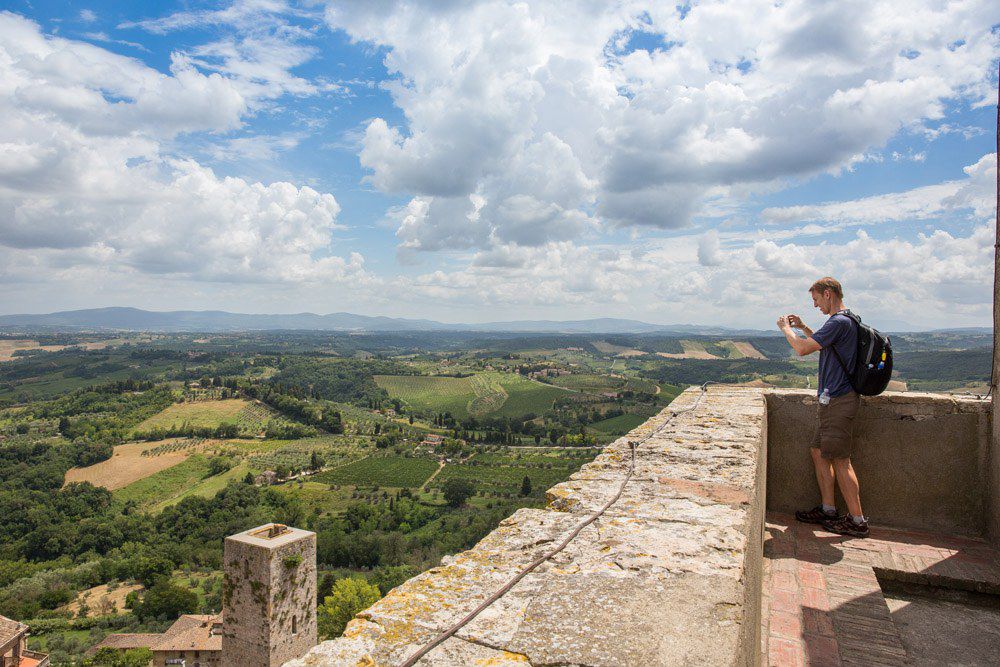 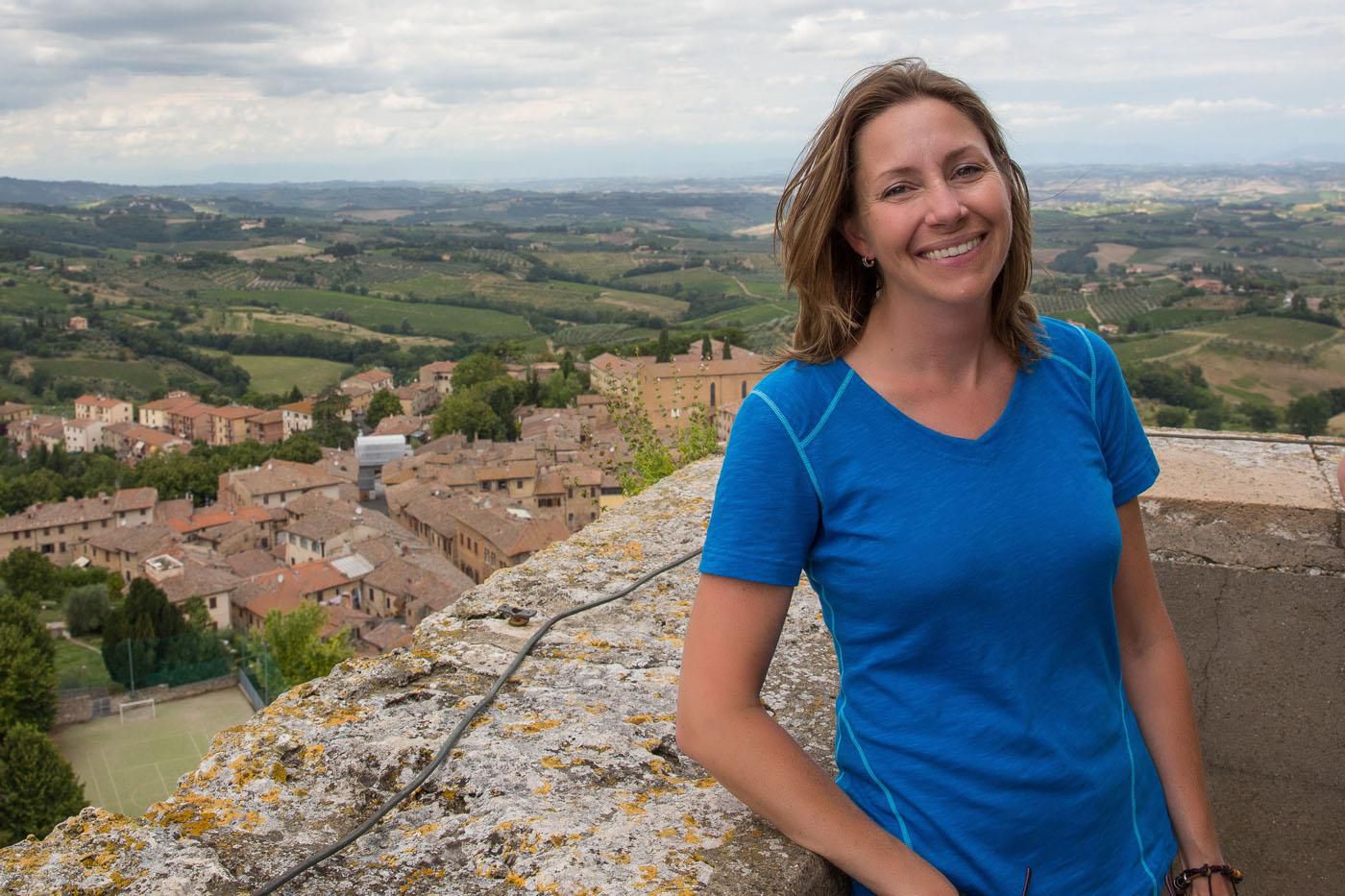 The views from the tower are awesome but we also really enjoyed walking through the streets. It is mostly a pedestrian only town, with the occasional small car navigating through the narrow streets.

The Historic Centre of San Gimignano is a UNESCO World Heritage Site. Several piazzas, or squares, make up this historic center. From here, you can visit the Duomo, a small museum called San Gimignano 1300, or find a cafe take in the scene. 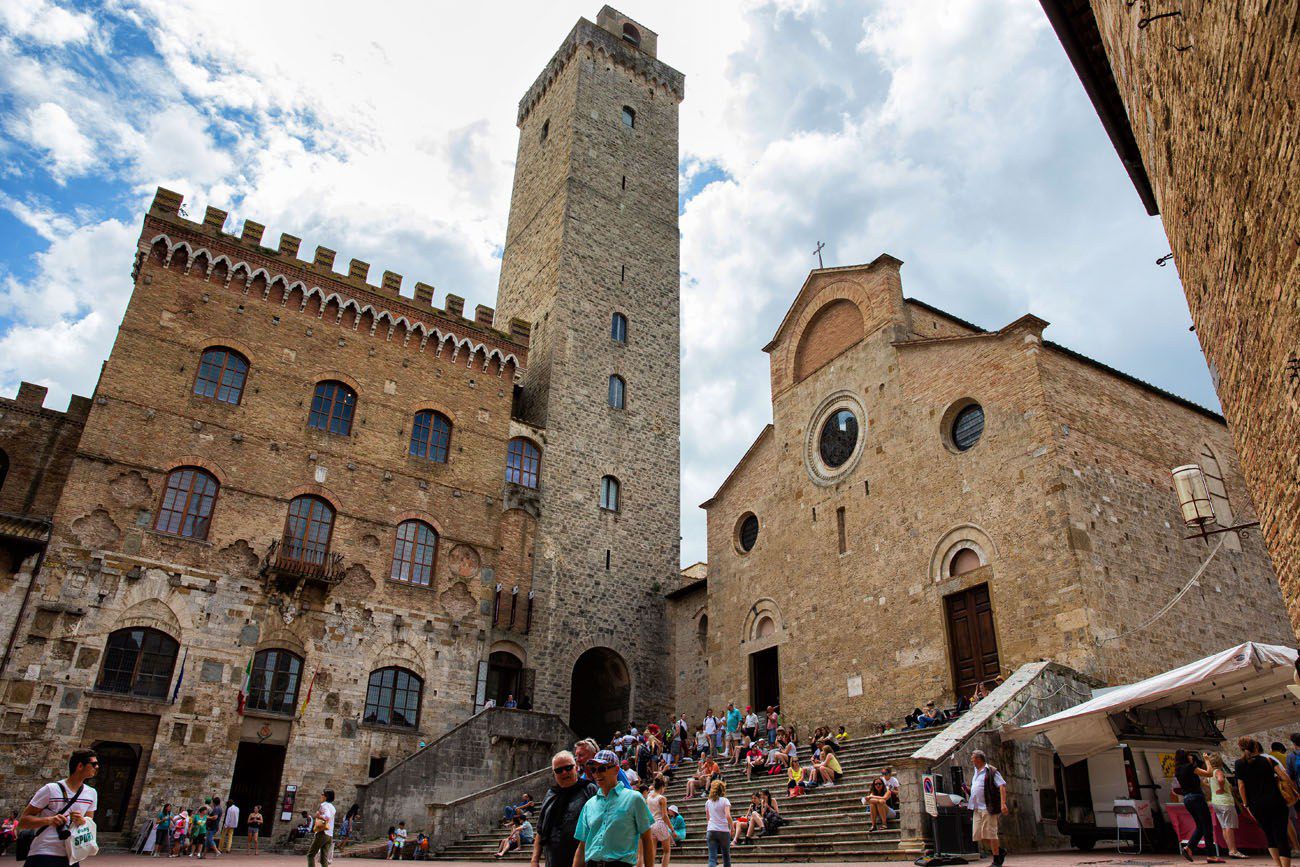 Explore the Side Streets

If you really want to see San Gimignano, don’t hesitate to explore the side streets. We wandered off the main tourist drag, for a little time away from the larger groups of visitors. From here, we had a gorgeous view of Tuscany and we could take our goofy family photos that we love so much! 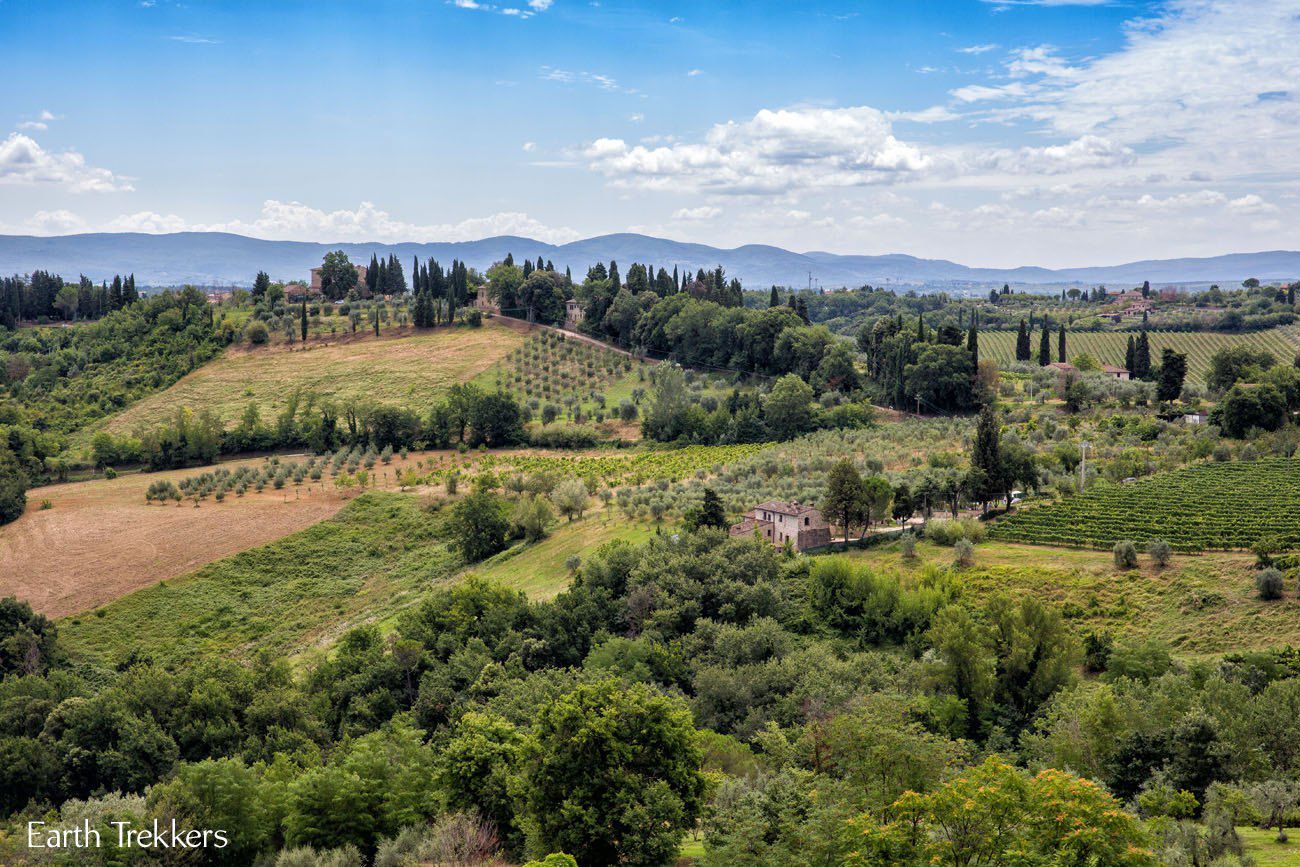 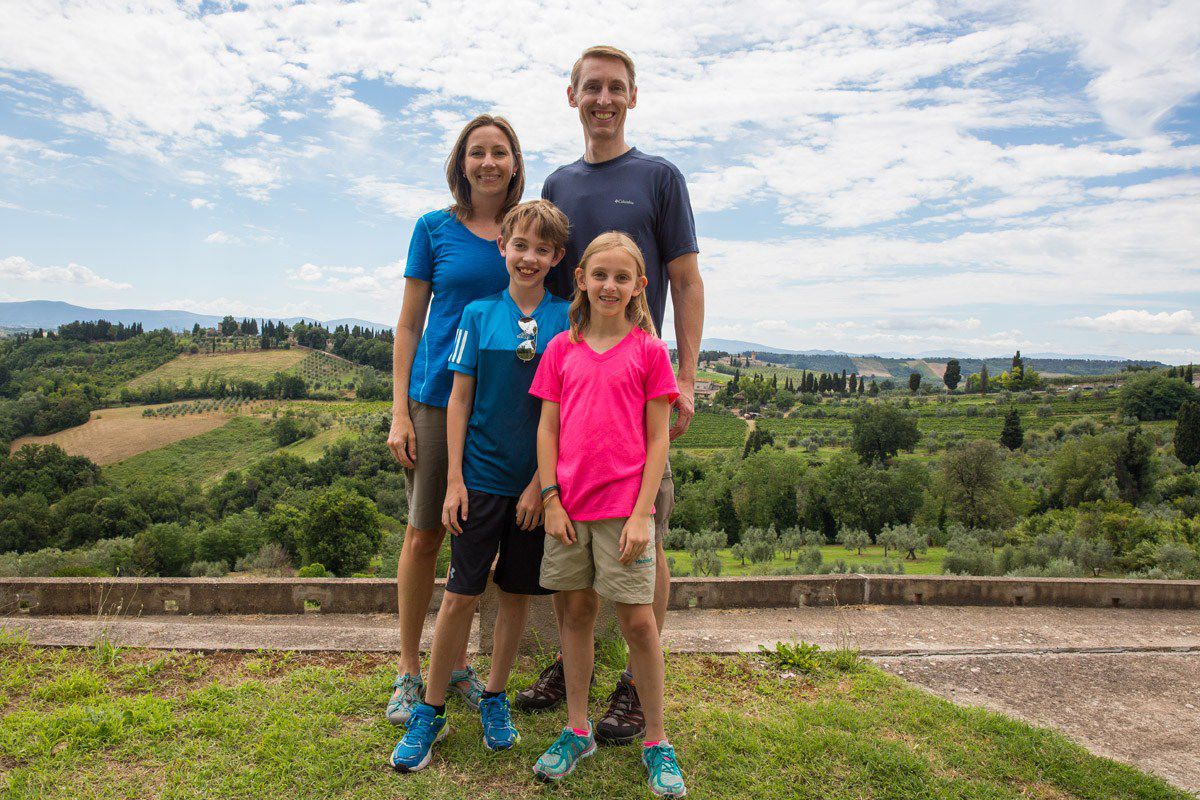 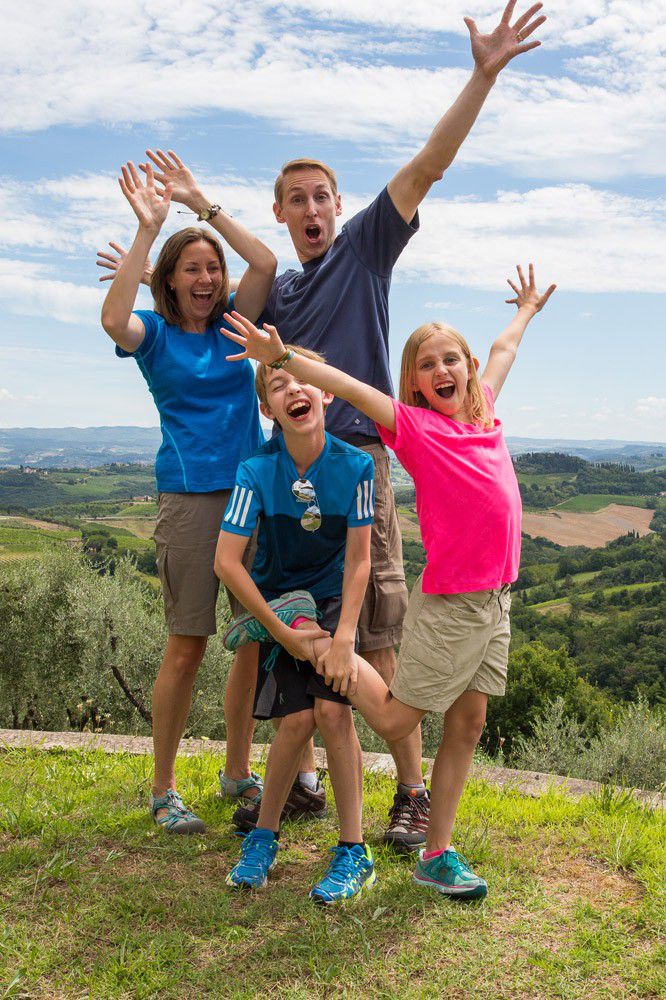 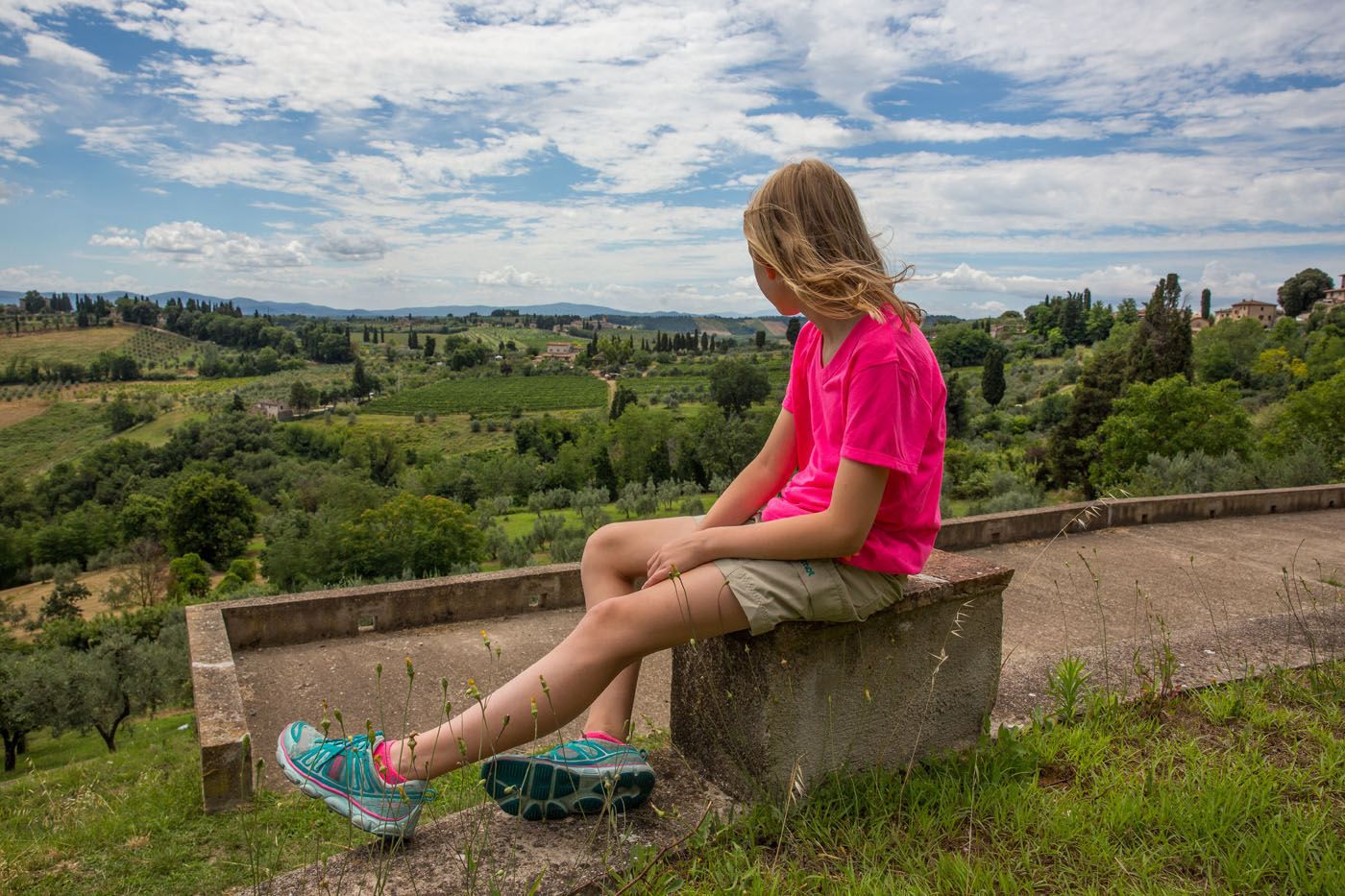 We wandered into the small shops, did a little shopping, and bought the best salami we have ever eaten.

And finally, it was time for a late lunch.  We ate at La Mangiatoia, a great restaurant that was featured in Bon Appetite Magazine.  We had our best meal in Italy so far, eating chicken and mushrooms, spaghetti with meat sauce, and spaghetti with cinghiale meat sauce.  So good!! 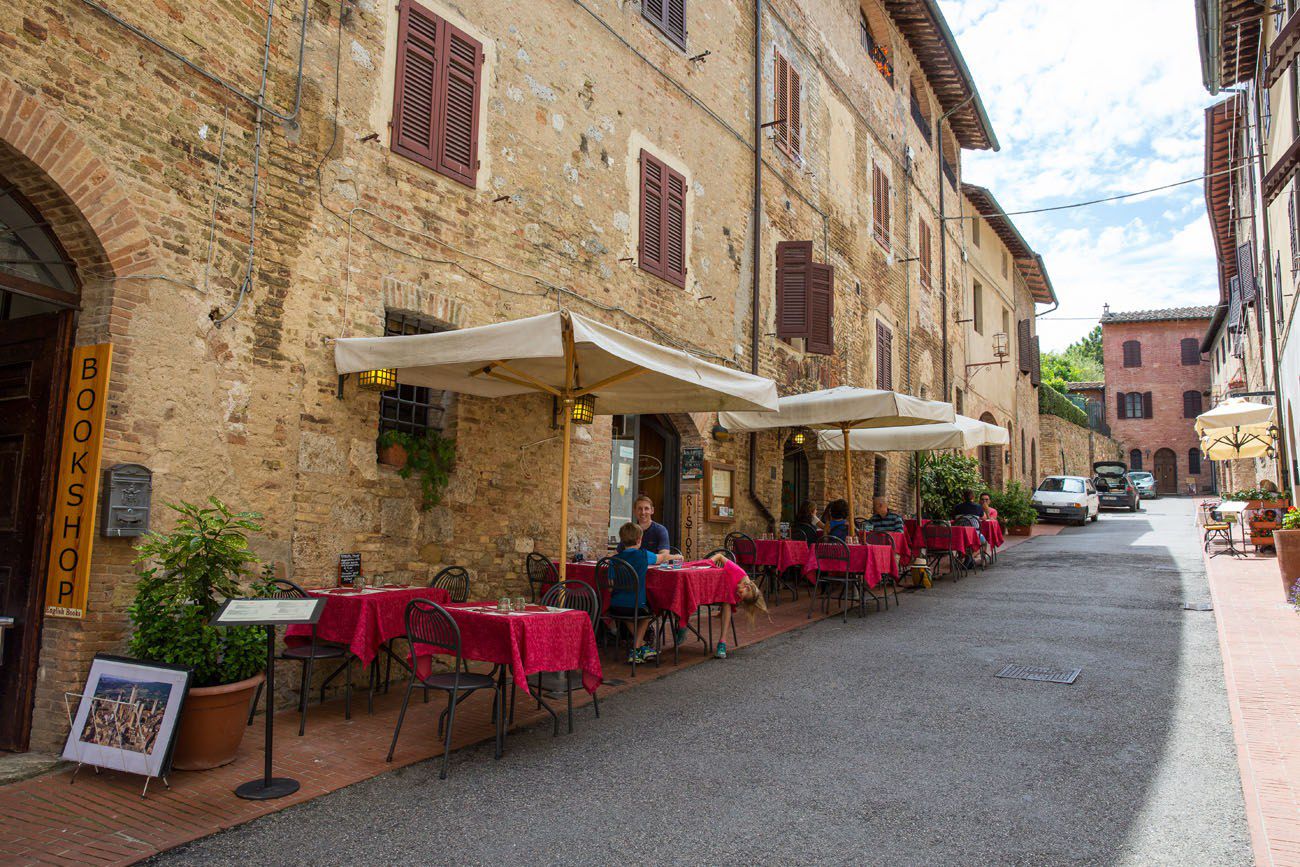 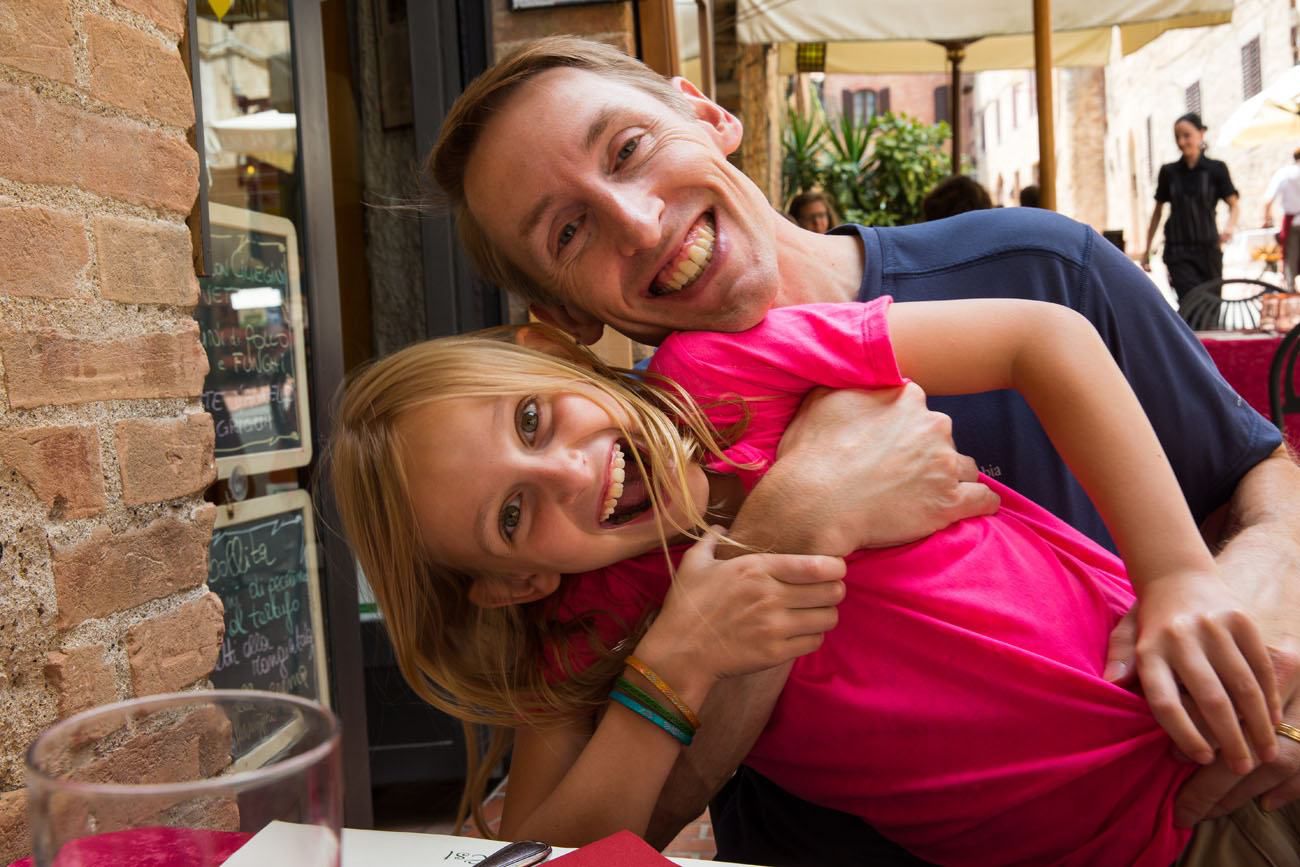 San Gimignano is a hill town that is easily connected by bus, although we did not have the best experience with the buses in Italy. Our home base to explore Tuscany was Siena. From Siena, we took the public bus to San Gimignano (about one hour).

In the afternoon, to get back to Siena, the first bus did not arrive, which left us (and a growing crowd of people) waiting an extra 45 minutes for the second bus. On multiple occasions in Italy we were left waiting for buses that failed to show up. So yes, you can get here by bus, but be prepared to put yourself at the mercy of the Italian bus system.

To learn more about getting to San Gimignano from Florence or Siena using public transportation, click here.

If we did it again, we would either rent a car or hire a driver. You can rent a car for the day from Florence or Siena. We rented a car for one day while in Siena to tour the Tuscan Hill towns. We used Hertz Noleggio Auto located near the train station and had a good experience.

You can also join one of these tours that includes several other hill towns in Tuscany.

If you have any questions about how to visit San Gimignano, or if you want to share your experience, let us know in the comment section below.

ITALY ITINERARY: 14 Day Italy Itinerary: Best Way to Spend Two Weeks in Europe
ROME: 2 Days in Rome: The Perfect Itinerary for Your First Visit
BEST OF ITALY: 20 Best Places to Visit in Italy
FLORENCE: Where to Get the Best Views of Florence
VERONA: 12 Best Things to Do in Verona
DOLOMITES: Tre Cime di Lavaredo: The Ultimate Hiking Guide
SIENA: One Perfect Day in Siena, Italy 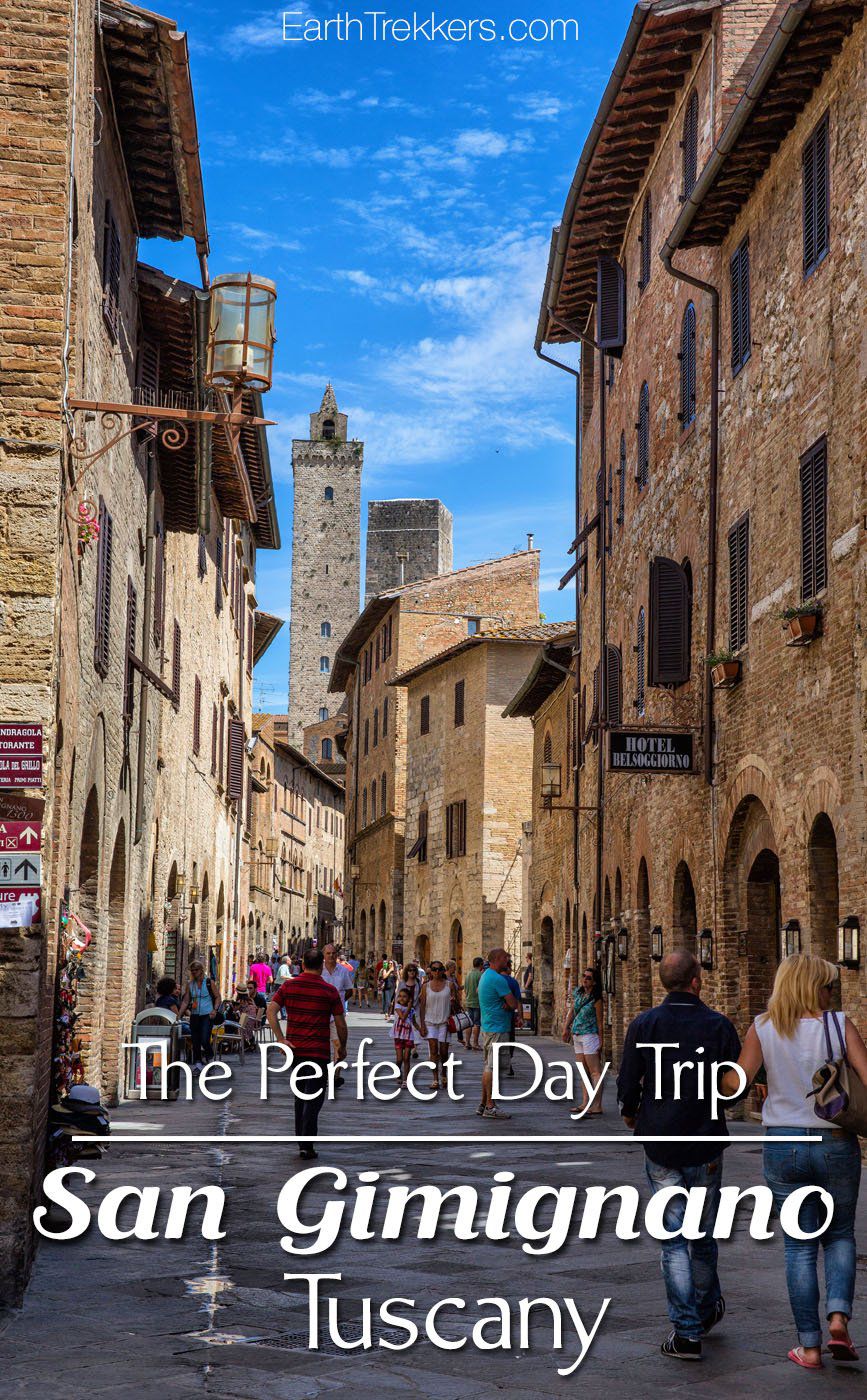 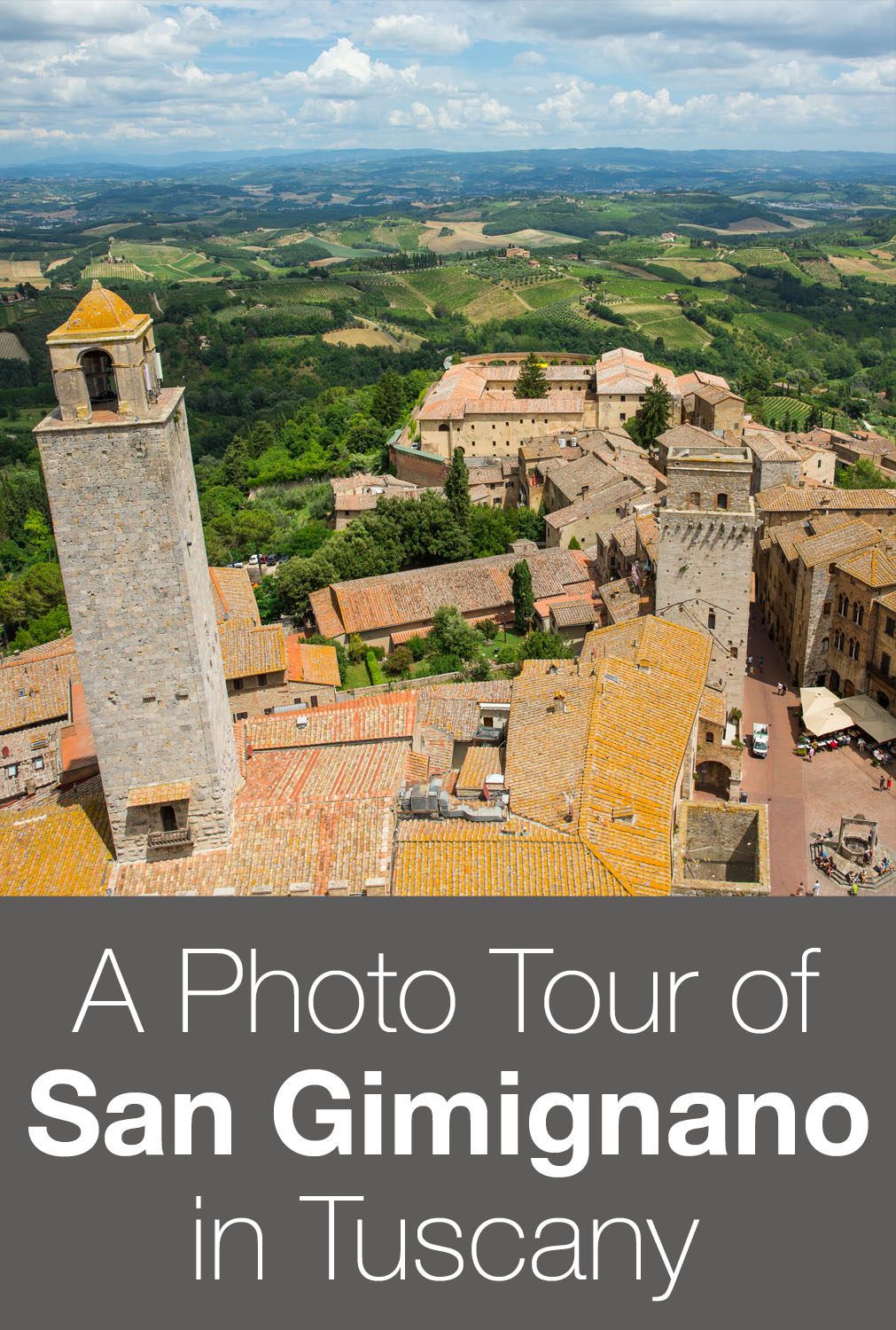