Kangaroos, wombats, and Tasmanian Devils, oh my! Time for another animal encounter, this time at Bonorong Wildlife Sanctuary in Tasmania, Australia.

Tasmania, an island that sits off the southern coast of Australia, is home to some of the most unique wildlife in the world. Here, mothers raise their young in pouches, mammals lay eggs, and devils roam at night. We are so excited to meet these amazing animals. 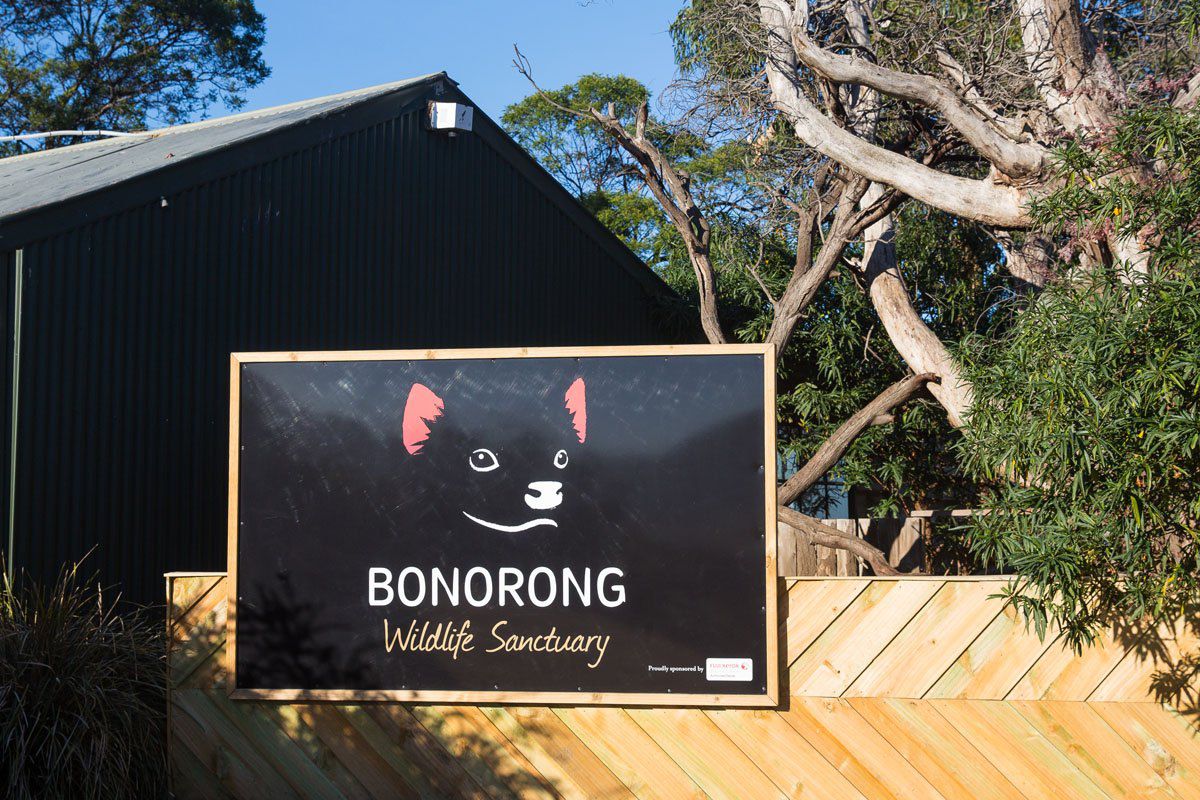 Bonorong Animal Sanctuary, located a half an hour north of Hobart, Tasmania by car, is working to save many of the Australian animal species that are on the soon to be extinct list. The most famous of these is the Tasmanian devil. The numbers of Tasmania devils are dwindling, mainly due to facial tumor disease, a cancer that is transmitted by virus within the animal species.

Bonorong and other animal sanctuaries are working hard to save these animals, rescuing injured ones from the wild and establishing breeding programs to increase their numbers. Seeing Tasmania devils was on our must-do list while in Tasmania and it was here we would get our first up-close encounter with this animal.

We arrived at Bonorong on a very clear and very chilly morning. Our Face-to-Face Feeding Frenzy Tour wasn’t to start until 10 am, giving us some time to feed the kangaroos. Each of us were given small paper bags containing pellet food and directed into the sanctuary. Grazing on the grassy hill were tons of kangaroos, just over 100 of them. Kangaroos!

The kangaroos knew what we were carrying and it did not take long until bunches of them were hopping over to us. 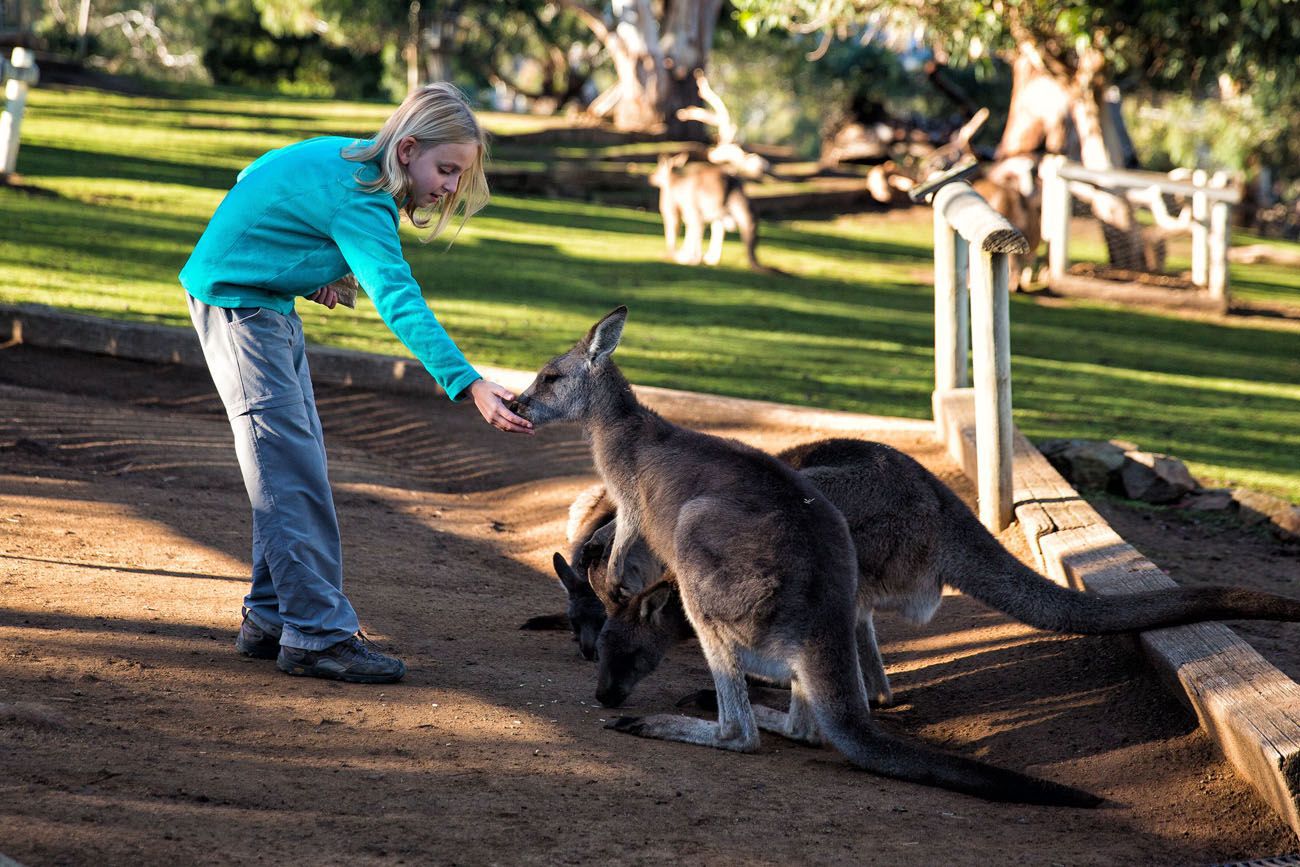 Feeding the kangaroos was SO MUCH FUN!  Yes, this was quickly becoming another one of my favorite travel moments and we had only been here two minutes.

We offered small handfuls of food to the kangaroos, which they would eat right from the palm of our hands. It was amazing how tame and how patient they were. The kangaroos would sit there, waiting their turn, and then gently eat the pellets off of our hands. There was no growling or pushing, no kangaroo bullies. I could feel their teeth on my skin but never once did they bite us. It did not take long until our hands were slimy and dirty. 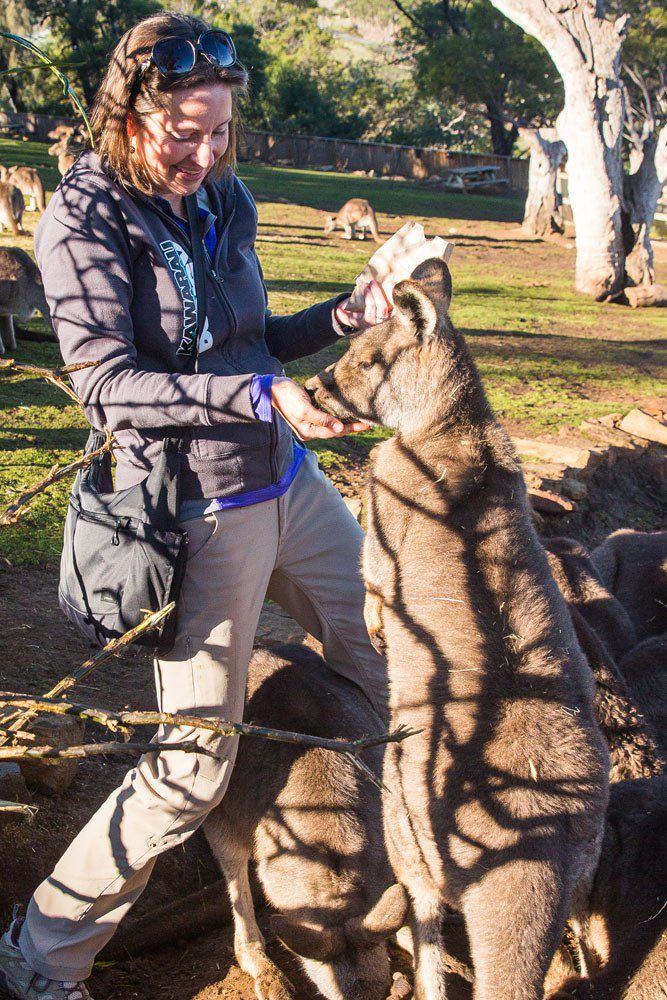 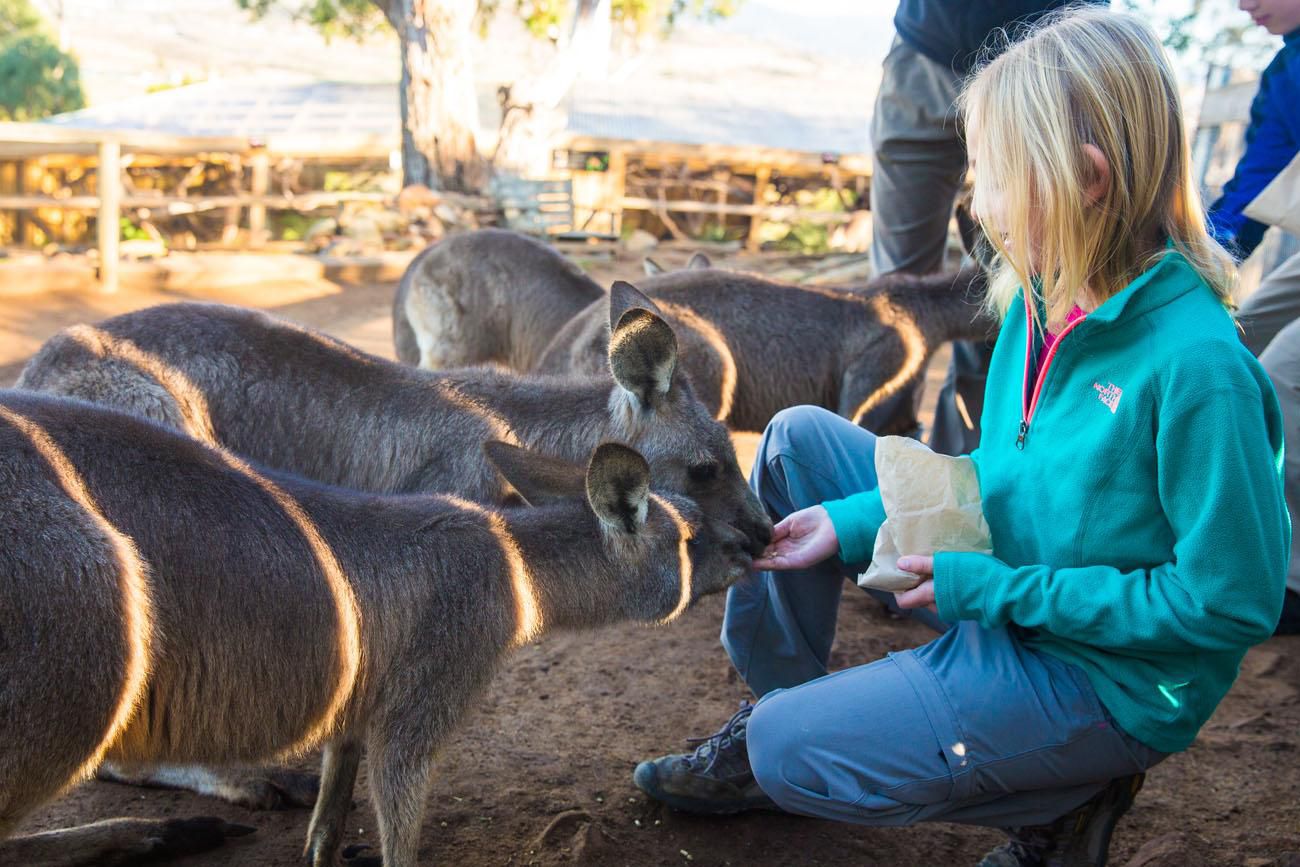 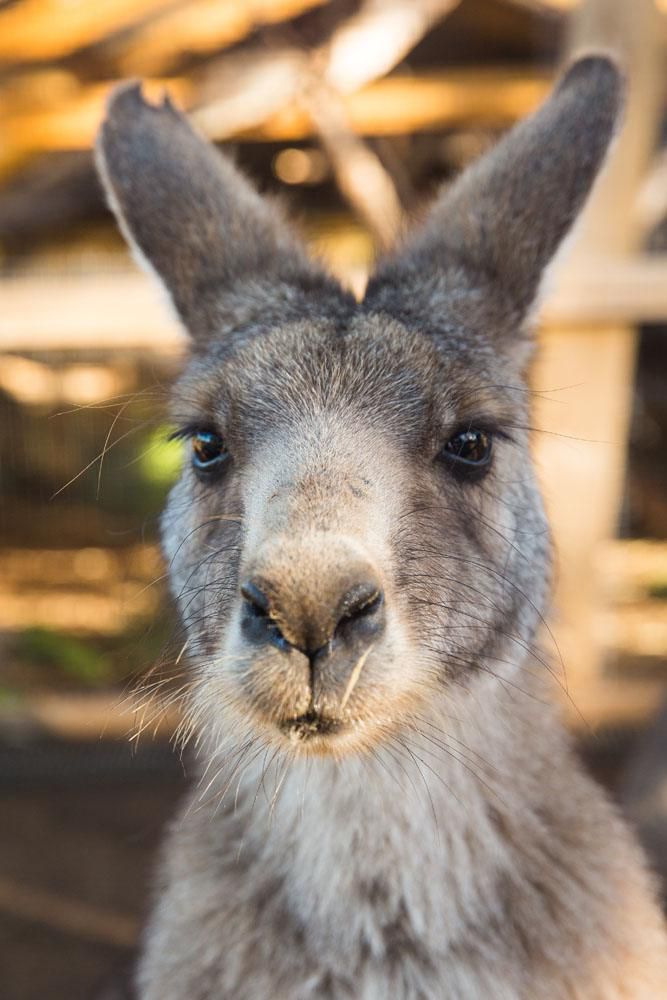 Some kangaroos had joeys peeking out from their pouches, another neat thing to see, especially for Tyler and Kara. But our favorite thing was watching them hop from place to place. They are so agile and so quiet that it was almost a little spooky. They were very good at sneaking up on us. 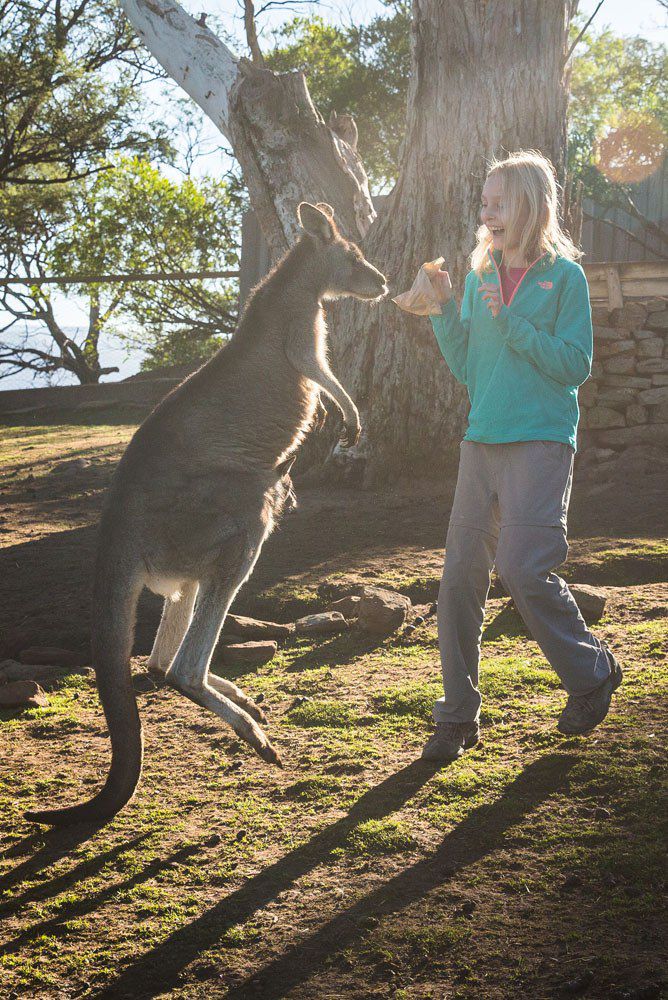 At 10:00 we were sad to say goodbye to the kangaroos but we had some other animals to meet. Our guide for the Feeding Frenzy tour was Jeff, a young Tasmania native. For two and a half hours we got a behind the scenes tour of Bonorong Wildlife Sanctuary, the best part being the chance to interact with and even feed some of the animals.

Most of the animals are nocturnal so they were a bit drowsy when we saw them, as it was midnight for them. Quickly, I could see the advantage of Bonorong’s nighttime feeding tour, when many of these animals are much more active and hungry for food. Some of these animals this morning were very reluctant eaters.

Our first encounter was with an Eastern Quoll, a small, nocturnal animal the size of a small cat. These animals can only be found in the wild in Tasmania. Here at Bonorong, they were peacefully sleeping in hollowed out logs filled with dried grass. Jeff found one who was interested in having a midnight snack. This cute, small animal almost ferociously gobbled up a dead, baby chick, bones, feathers, and all. 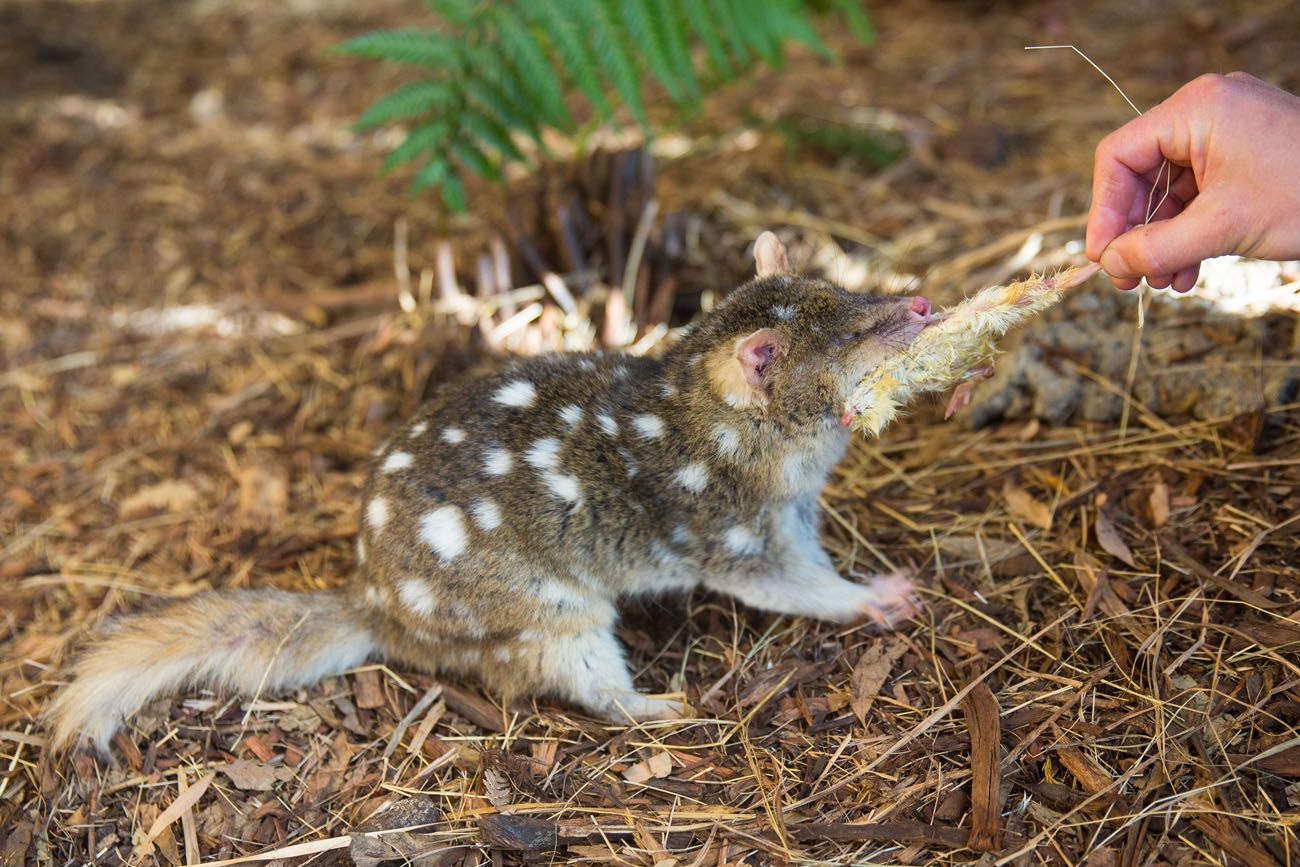 Next up was Betty, a wombat. I never really knew what a wombat was before today, but this bundle of fur and energy has become my second favorite animal, after the kangaroo. Betty is still young, a juvenile, and the size of a teddy bear. Like a toddler eager to play, Betty was constantly trying to escape Jeff’s grasp so she could get down and play. Once on the ground, she ran towards the gate, showing us the cutest waddling run ever. Adorable!

Full grown, these teddy bear like animals are not so adorable. They become little terrors, ferociously guarding their dens, not an animal to be messing around with. But right now, Betty was a cute fluff ball. 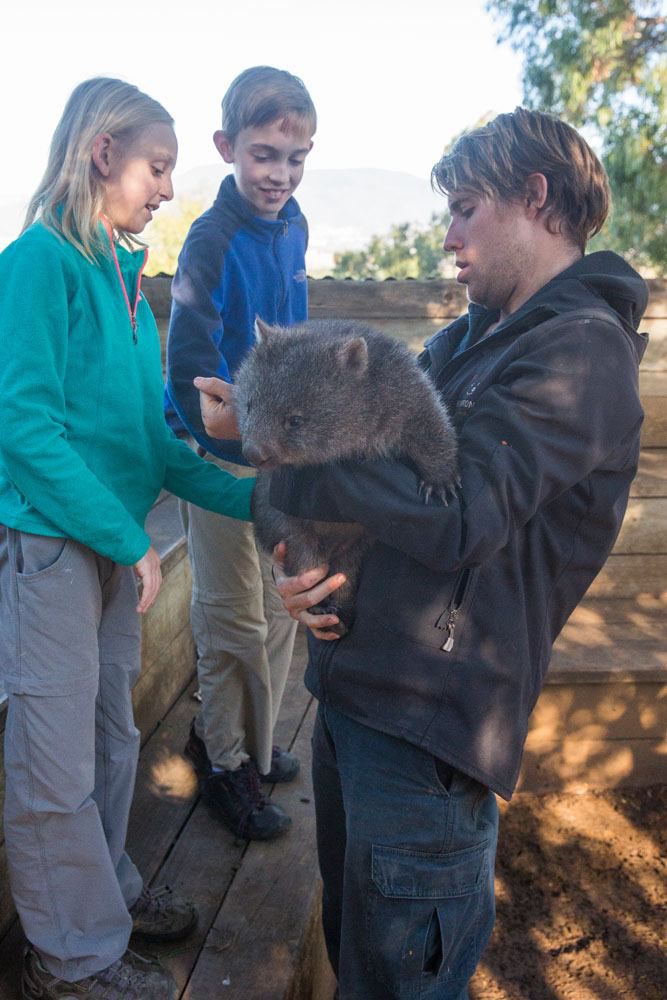 Then it was time to meet a Tasmanian devil. Tasmanian devils are carrion eaters, cleaning up road kill or feasting on animals that have recently died. They are slow, their eyesight is poor, and they are shy animals. In no way do they resemble the Tasmanian Devil featured on the Looney Tunes. These small animals do not spin around like tornadoes, stirring up trouble like in the cartoon. They sleep during the day and feed at night under the cover of darkness.

Tyler got a chance to play tug-of-war with Batman, a young male Tasmanian devil. The Tasmanian devil grabbed ahold of the wallaby foot it was offered, trying to pull it out of Tyler’s grasp. This little guy was strong! We could see him pulling and jerking Tyler’s body. Eventually, Batman won, running into his den with his treat. 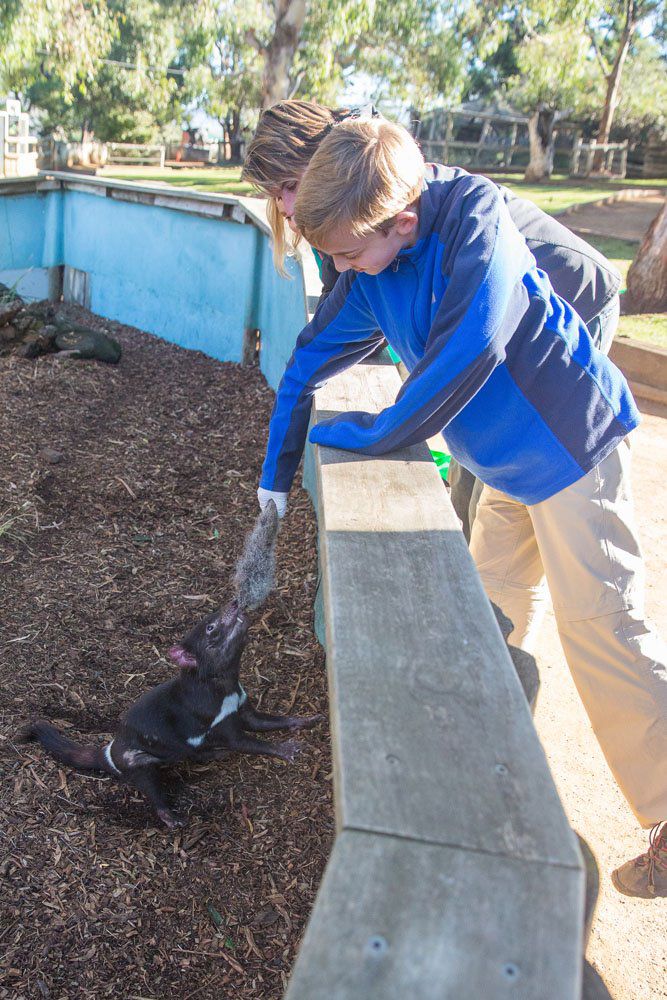 Next, we met a very sleepy koala. He had a very hard time keeping his eyes open while we visited him. Koalas sleep twenty hours per day and the rest of the time is spent feasting on eucalyptus leaves. Not a very exciting life. I was disappointed to learn that we were not allowed to hold a koala, as it is forbidden by Australian law. At least we got to stroke his very soft fur. 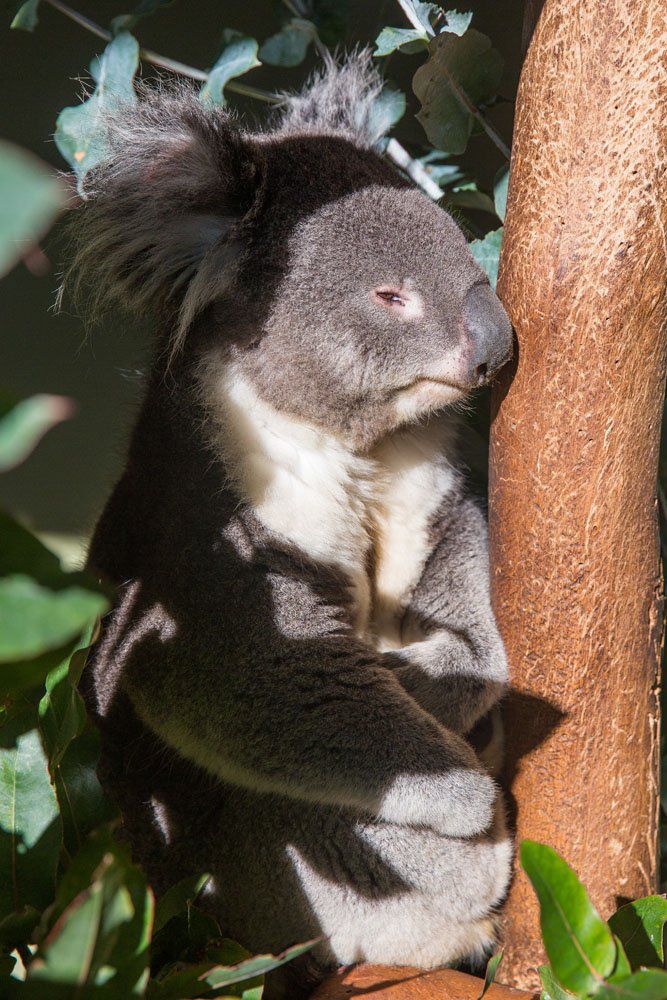 After the koala, we fed cockatoos and Tawny Frogmouth birds, saw emu’s, and even got to see a newborn blue tongue lizard, born just minutes ago. 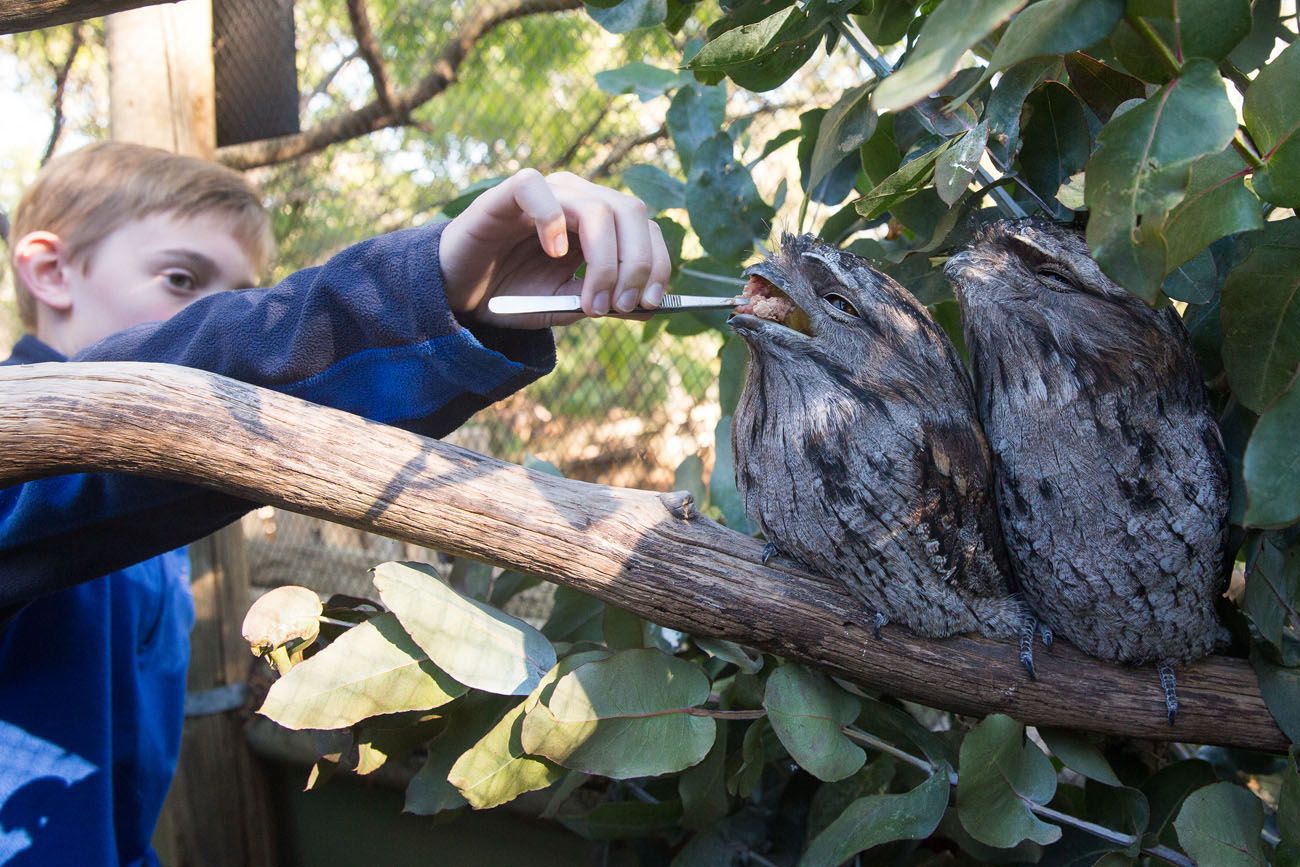 We all loved Fidget, an albino possum. Fidget balanced on our shoulders, nibbling on grapes and corn, his whiskers tickling our cheeks. 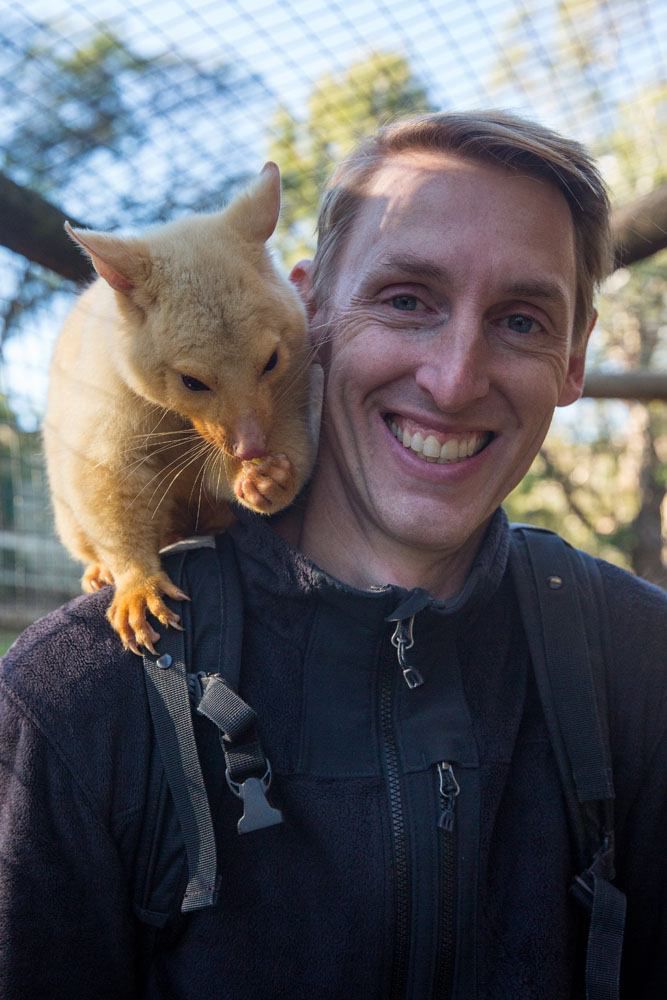 Kara’s favorite animal of the day was the sugar glider, the smallest, cutest, and softest of the animals yet. We stroked their incredibly soft fur while they nibbled on grapes. Now we can understand why people would want these adorable creatures as pets even though it is considered illegal. 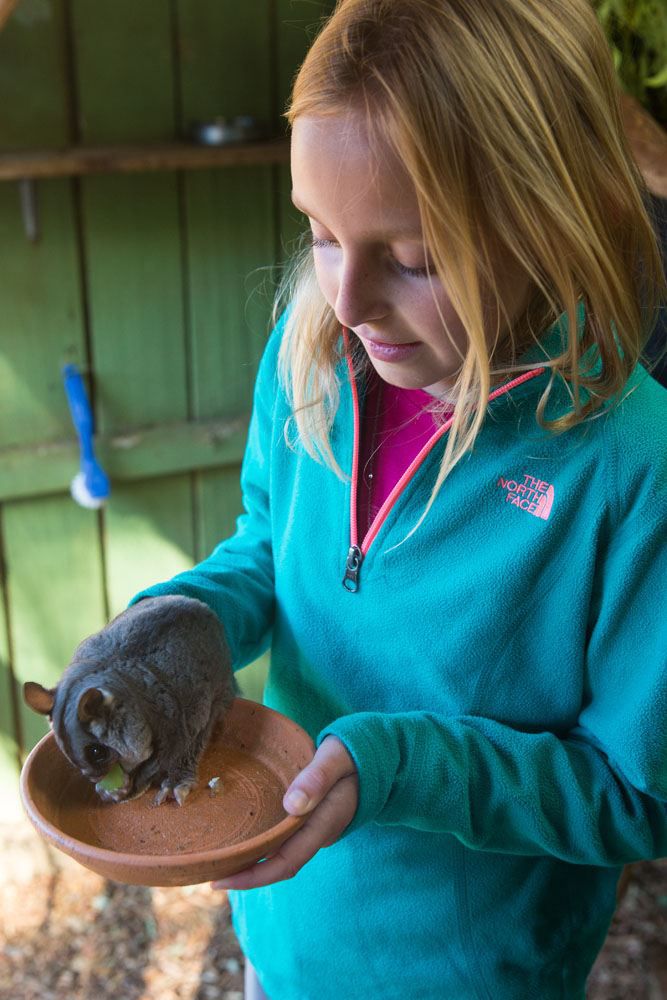 One More Chance to Feed the Kangaroos

Our tour of Bonorong concluded with one more kangaroo feeding session. Now that it was midday, many of the kangaroos were uninterested in food, just lazily lying in the sun or nibbling on hay. Tyler and Kara found several that were interested in eating, but without heaps of them crowding around us this time, it was not as thrilling as it was earlier this morning. 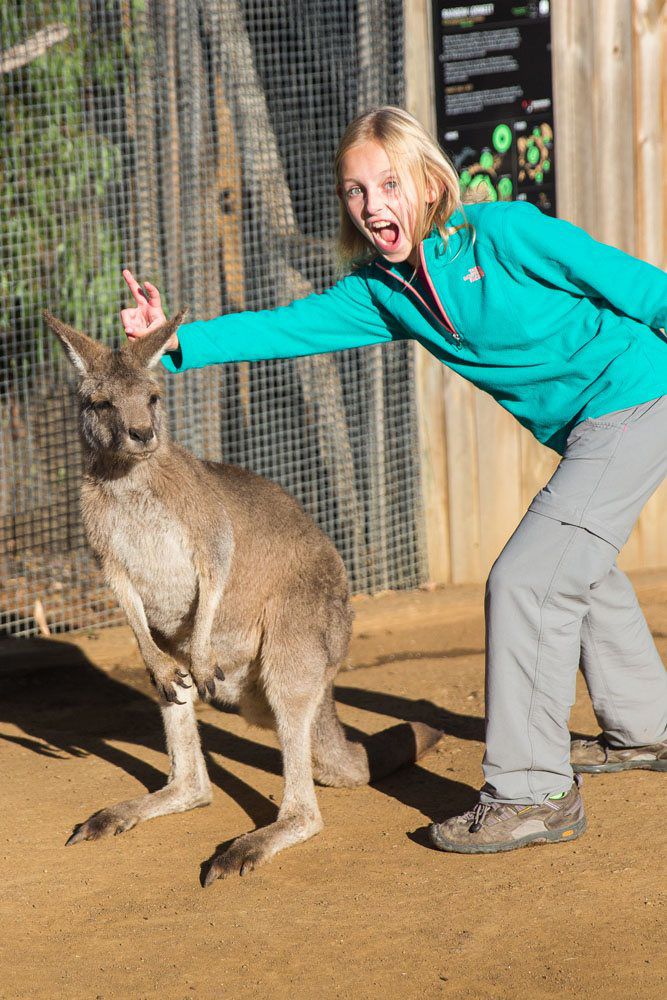 Our experience at Bonorong Wildlife Sanctuary was awesome. The four of us learned a lot, we were able to get up close with the animals, and our favorite part was feeding the kangaroos. Not only did we have fun but it was a very educational experience and our money will go towards Bonorong’s animal conservation projects.

There is a fee to enter the park and this money goes to operating Bonorong’s conservation projects. Along with this fee guests are given a bag of kangaroo food and the option to take a free 45-minute tour through the park. 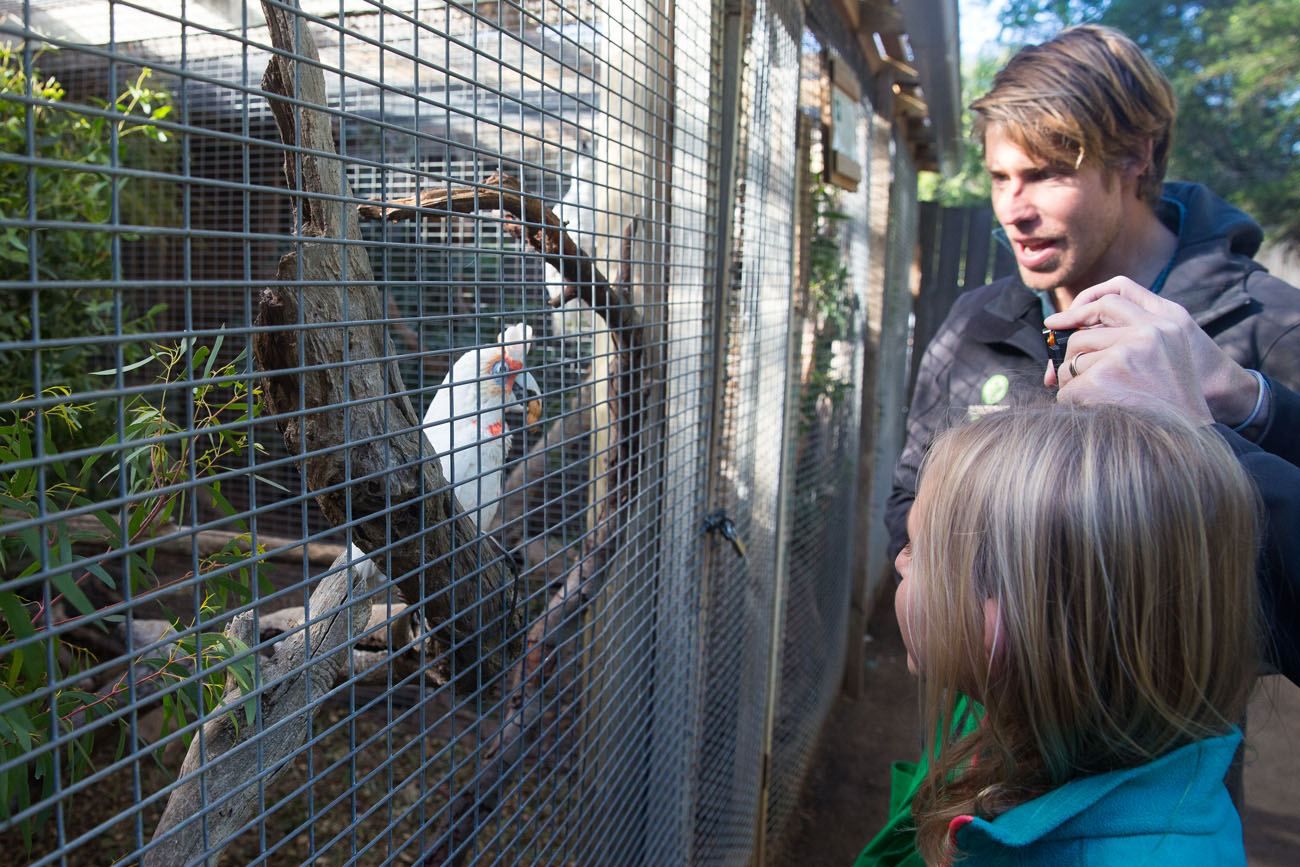 For those willing to spend a little more money, there is the option to take the Feeding Frenzy tour (which we did) or the night tour.  Both of these allow guests to get up close and feed the animals. I highly recommend it, especially for families, as it is very educational and fun at the same time.  We did not do the night tour, but Jeff made it sound like it was phenomenal. To see sugar gliders and quolls running, jumping, and climbing around their enclosures (while you are inside of them) would be a blast. If we return to Hobart, which hopefully we will someday, I will be sure to sign up for the night tour.

To learn more and get updated pricing, visit the Bonorong Sanctuary website.

Planning a trip to Australia? Read all of our articles in our Australia Travel Guide.