Google “world’s most dangerous airport” and the Tenzing-Hillary Airport in Lukla, Nepal, consistently makes it onto the list. The geography of the airport’s location combined with factors such as a very short runway and limited electricity make this airport one of the world’s most dangerous. Add in the fact that several of the airlines that fly in and out of Lukla have such poor safety records that they are black-listed by European Commission, and you have quite a dangerous situation on your hands.

Flying to Lukla, Nepal is not for the faint of heart 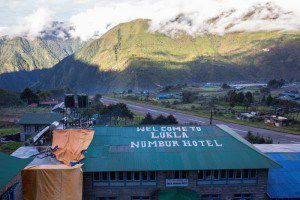 Knowing all of this, our family willingly signed ourselves up for this flight to Lukla in September 2014. Our adventure, trekking to Everest base camp, started well before putting one foot in front of another on the trail. The adventure really started at an airport in Kathmandu.

Our trek began towards the end of September. At this time, the monsoon rains are coming to an end and crisp, clear October skies are just around the corner. We started our trek a little before peak season, wanting to enjoy the trail before it was congested with other trekkers from around the world. With our early start came the threat of lingering rains that can cancel flights to Lukla, sometimes for consecutive days on end.

The night before our flight was a restless night where sleep evaded Tim and I. We were very nervous about what lay in front of us. Soon we would be trekking for almost two weeks, taking two children to altitudes higher than any of us had ever been to before, on rocky, difficult trails in a land of yaks, sherpas, and altitude sickness. But this was not our main concern. What really kept us up that night were the thoughts of our plane crashing into the side of the mountain, our family engulfed in a ball of flames.

These fears are not unfounded. In 2008, an aircraft crashed while landing in Lukla, killing all 18 passengers on board, with only the captain surviving. In 2013, a helicopter crashed while landing in Lukla, killing one passenger. There have been a multitude of other crashes at Lukla, resulting in injuries to passengers and crew. Needless to say, this airport does not have a good safety record. 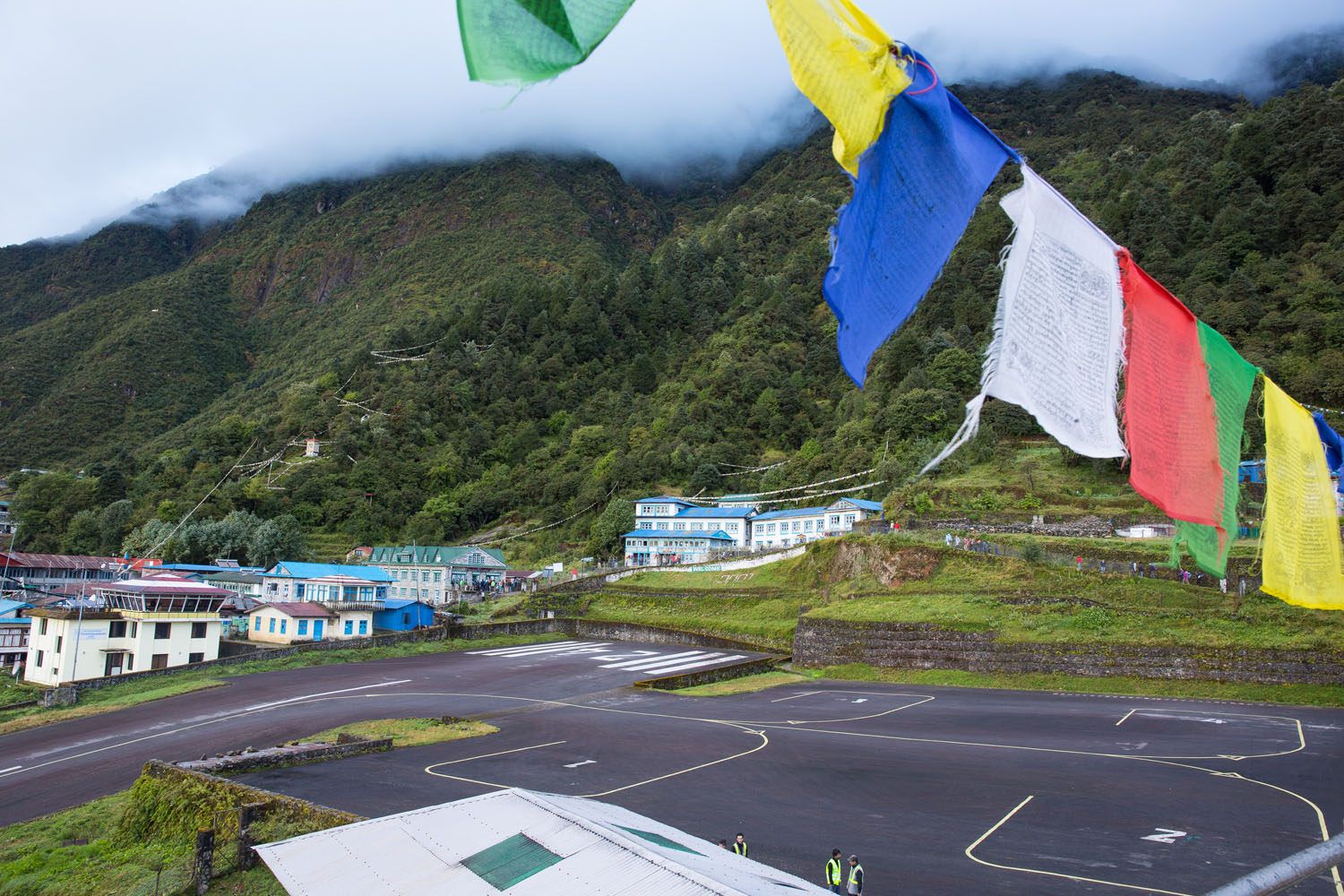 After a few hours of tossing and turning, we were up early and at the airport at 5:30 for our very early morning flight. As it would turn out, we would have nothing to worry about today…all flights were cancelled due to rain showers both in Kathmandu and in Lukla. With rain comes clouds and poor visibility, making it nearly impossible to fly into Lukla.

Tim and I got to repeat another night of tossing and turning, wondering why we thought this would be a good idea, trekking to Everest base camp. That’s not to say that we were not excited, because we were. In some strange, twisted way, the dangerous nature of this flight definitely made things much more interesting.

On our second morning, we awoke to clear skies. Our flight to Lukla was a go. 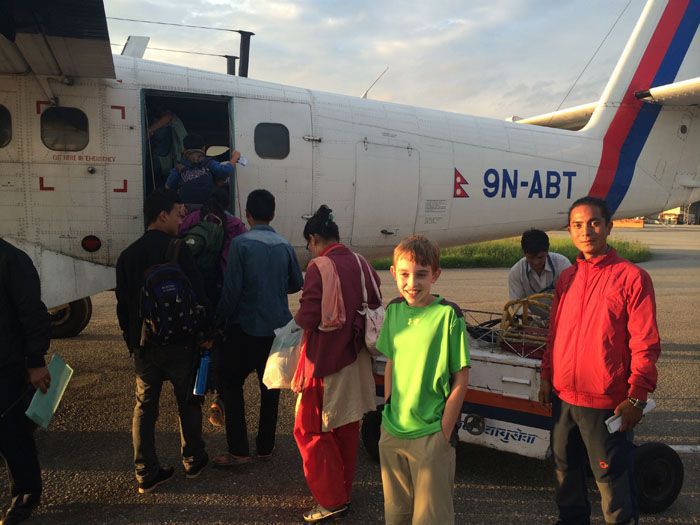 At 6:15 am at Tribhuvan International Airport, we boarded a Nepal Airlines Twin Otter airplane. Tim and I were very nervous but also excited. This was one of the craziest things we have ever done, and we have done a lot of crazy things! We took our seats, were given cotton to stuff in our ears to muffle the noise of the engines, and our plane taxied to the end of the runway. There was no backing out now.

It was a very smooth, very scenic, 35 minute flight to Lukla. We had amazing views of Kathmandu Valley and the Himalayas, located off in the distance. Soon we would be walking among those giants.

For most of the flight we all felt very calm, enjoying these once in a lifetime views of some of the highest mountains in the world.

Then Lukla appeared. Lukla and its tiny runway. 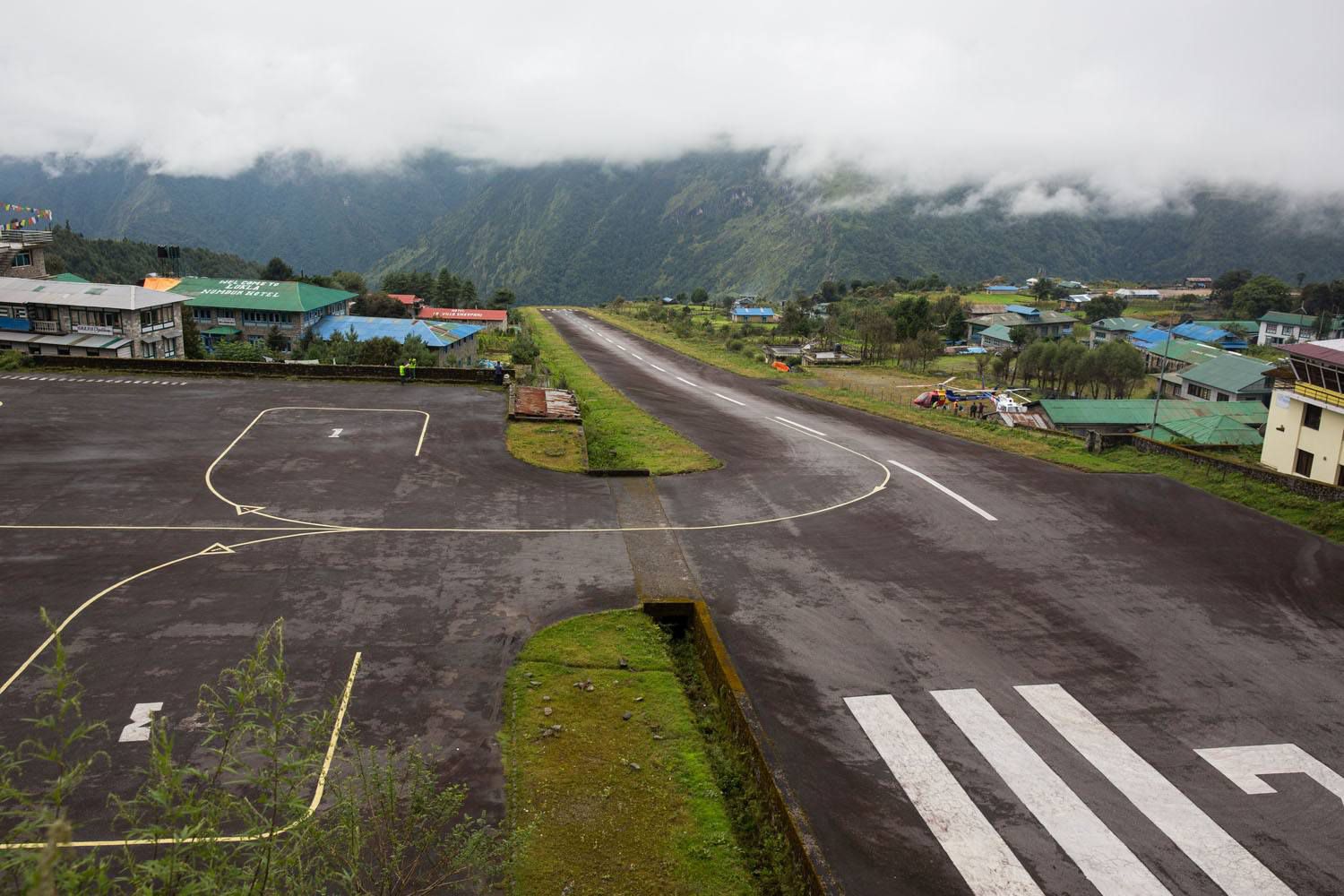 Lukla is perched on the side of a mountain. There is one runway that slopes upward into the side of the mountain. This incline helps to slow down landing aircraft and gives a speed boost to aircraft taking off. Planes taking off get just one chance to get off of the ground. Once the runway runs out it is just a free fall to the valley floor below. 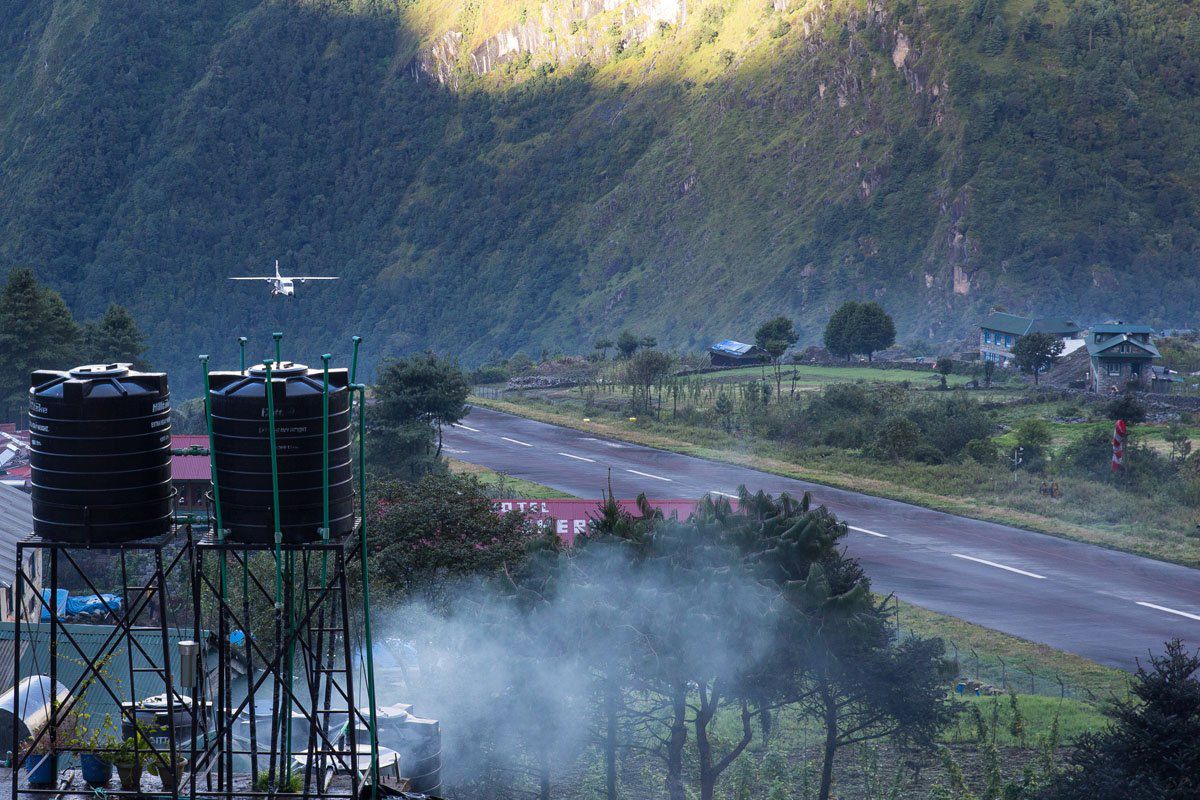 I could watch our approach to the airport through the cockpit windows. Wow, that runway looked short.

We descended closer to the airport, and just before touching down, the stall horn goes off. With a thud we hit the runway, bounced up and down a few times, and then coasted up the runway. We were safe. You know it is a crazy flight when all of the passengers on board applaud the pilots for a safe landing.

Tyler and Kara said that they were not afraid during the flight. Of course, we did not clue them into our anxieties ahead of time, although I wonder if that really would have mattered for them. Tyler and Kara thought the entire experience was fun, especially flying on a very small airplane for their first time. 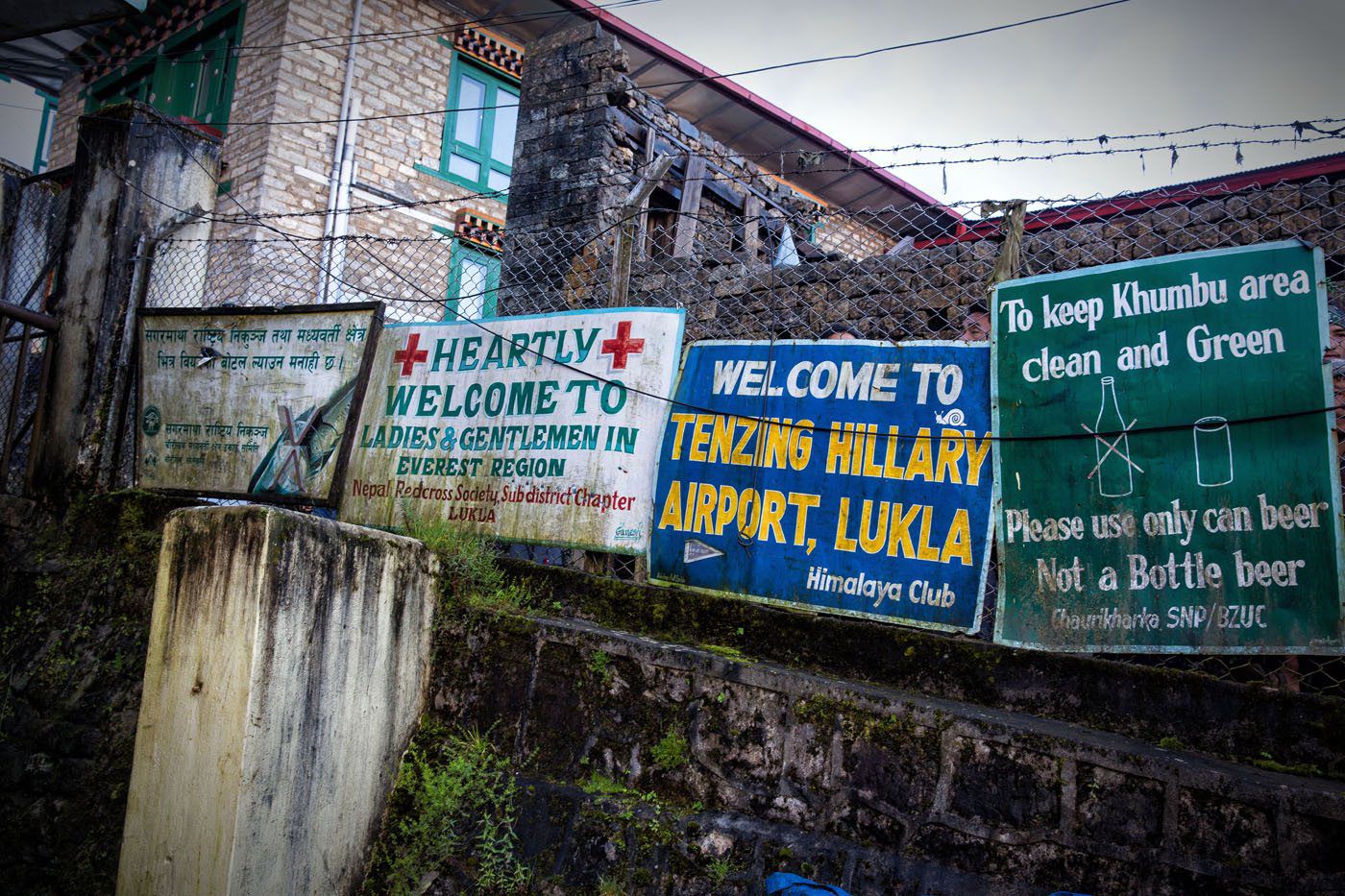 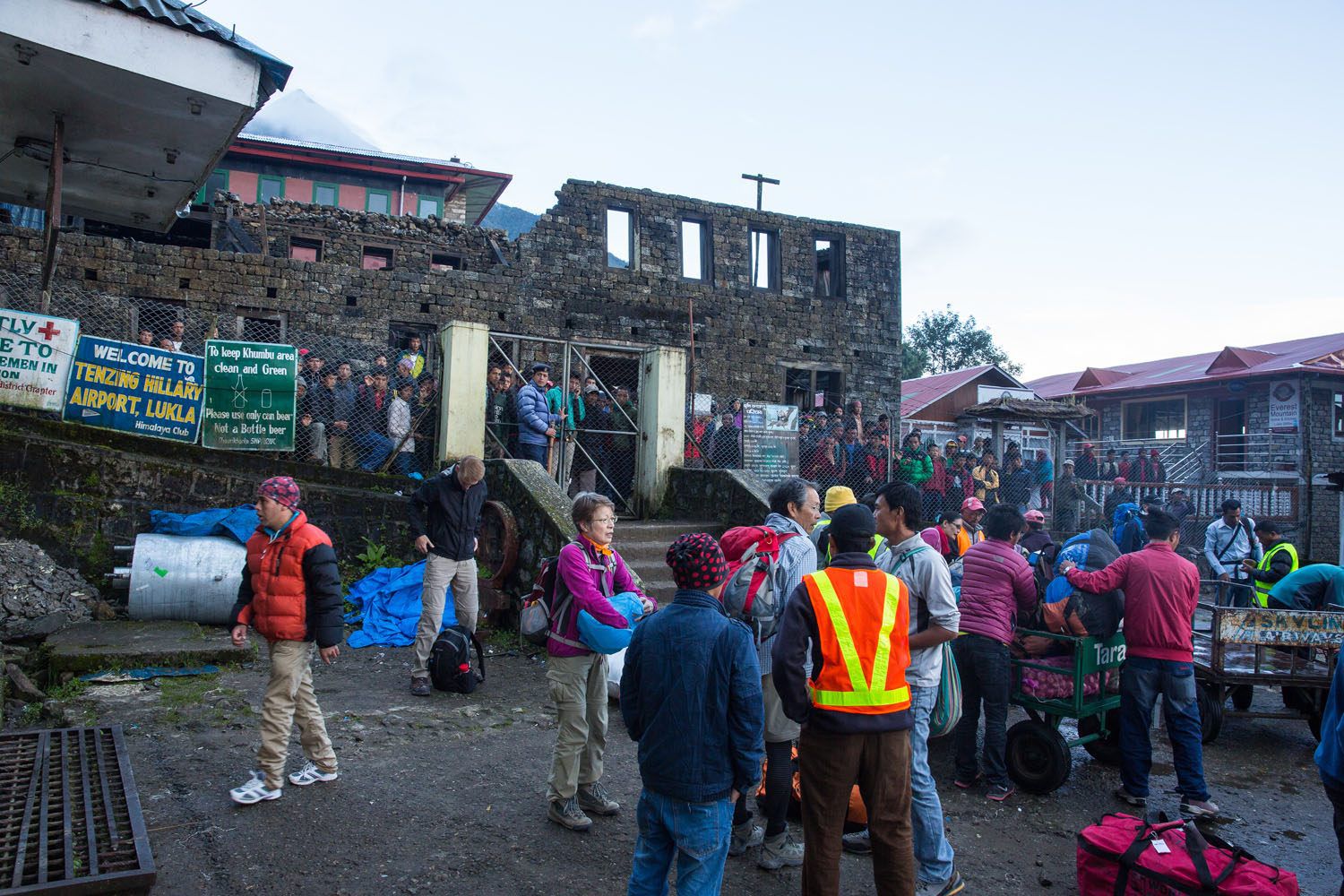 It was cloudy in Lukla by the time we arrived, and just a half hour later flights for the remainder of the day would be cancelled. After flying among the green mountain peaks to get here, I can understand how dangerous it would be to fly during cloudy conditions. Tim and I were thrilled to have gotten here safely, ready to start the next part of our adventure, trekking to Everest base camp. 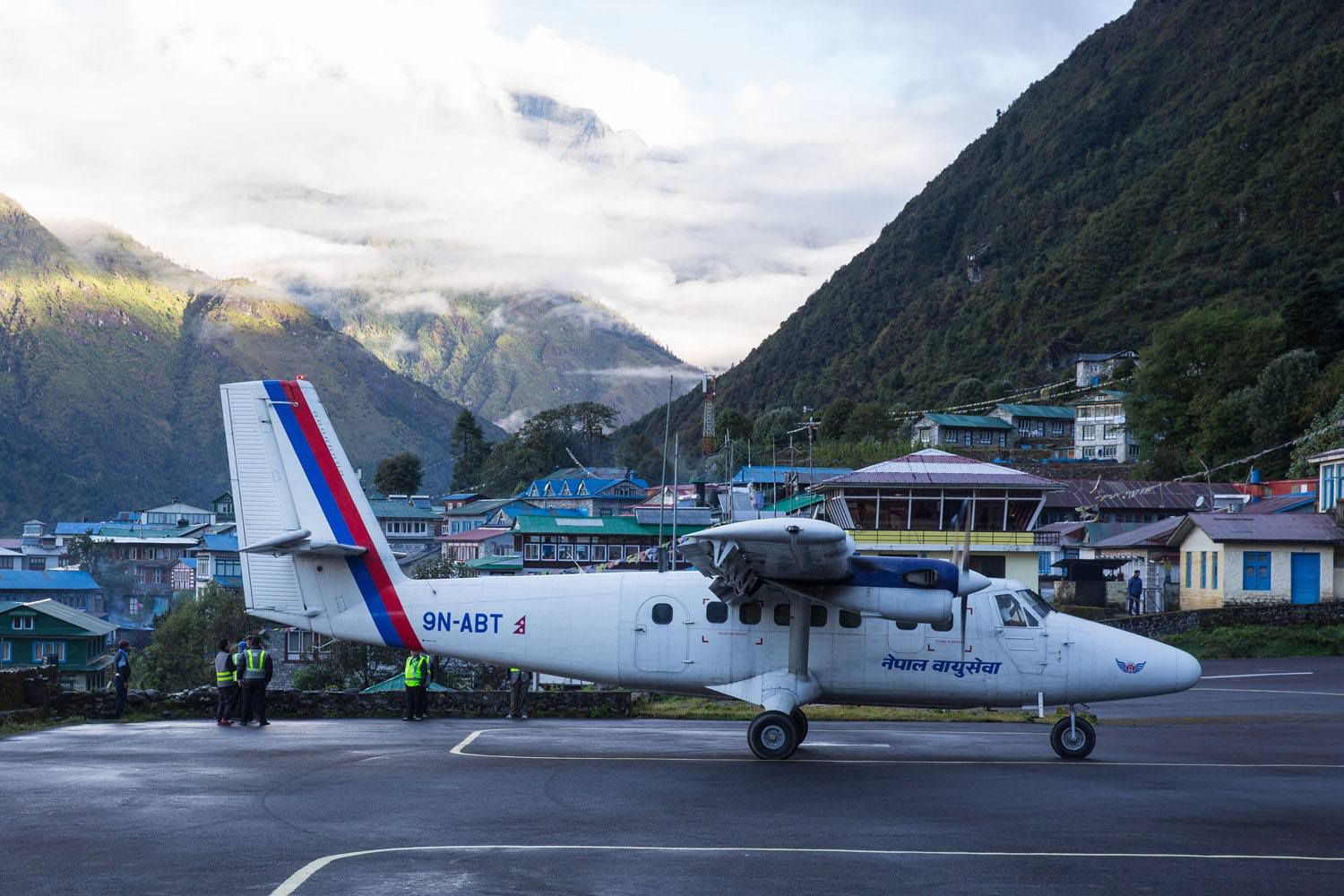 Curious about what it is like to fly back to Kathmandu from Lukla?

This was pure fun, as crazy as it was to tear down the runway at full speed, launching into the air just before the real estate ran out. Lifting off from the airport in Lukla was like the world’s best roller coaster ride. Check this out!

About Flights from Kathmandu to Lukla

As of late 2019, flights between Kathmandu to Lukla have been reduced, and I heard maybe even cancelled, due to congestion and runway maintenance at Tribhuvan International Airport. Rather than flying from Kathmandu, airlines are busing people to Ramechhap airport, which is a 4 hour drive from Kathmandu. From here, you fly to Lukla. Flight times are very fast (lasting only 12 minutes) and less likely to be cancelled or delayed due to unfavorable weather conditions. When booking your trek with a tour company, confirm your flight details between Kathmandu and Lukla.

Planning a trip to Nepal? Read all of our articles in our Nepal Travel Guide. 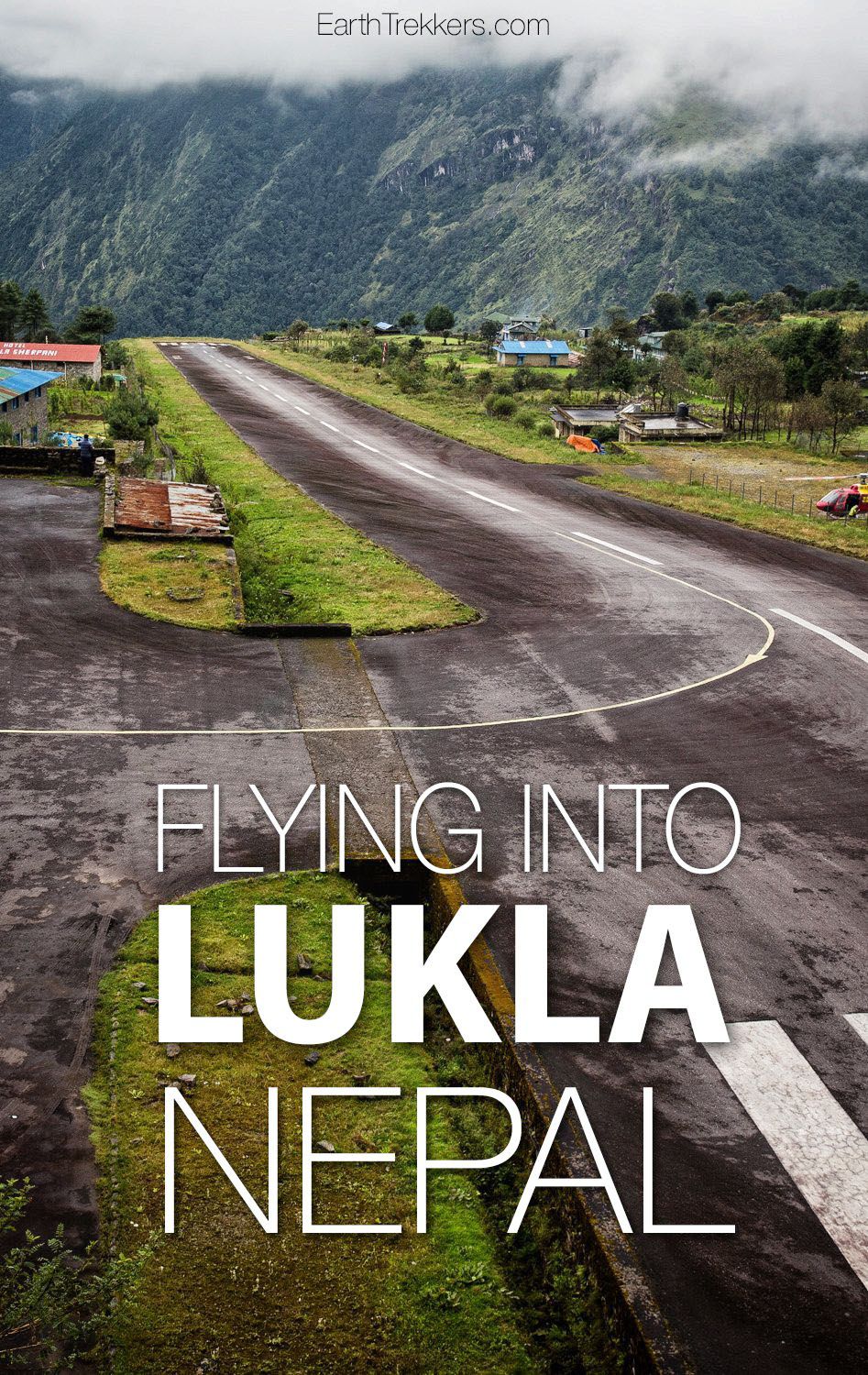