Hiking Mount Zas on the Island of Naxos 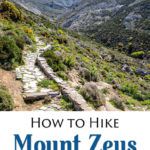 There are two reasons to hike Mount Zas…to stand on the highest point in the Cyclades and to summit the mountain where Zeus was born and raised.

According the Greek mythology, Mount Zas, also called Mount Zeus, is the place where Zeus spent his childhood. Tucked away on the slopes of the mountain is a small cave where Zeus was born. You can visit this cave as you hike to the summit.

Naxos is the largest island in the Cyclades. It feels vastly different from volcanic Santorini and windswept Mykonos. Naxos is mountainous, fertile, and covered with patches of trees, a rarity in the Cyclades. The geography, and the mythology, make Naxos one of the best spots in the Cyclades to go hiking.

If you know us, then you know that we can’t resist a good hike. And to explore the slopes where Zeus was raised, how cool is that?

The hike to the peak of Mount Zas is relatively short, but it’s also steep and strenuous in spots. In all honestly, I wouldn’t classify it as a “fun” hike, but the main reason for doing it is for the breathtaking views from the summit and for bragging rights that you stood on the highest peak in the Cyclades.

Here’s how to do it.

There are two main routes to the summit. The easiest route is from Aghia Marina. This hike is 7 km round trip with 300 meters of elevation gain.

Quick Facts about the Hike

Elevation profile of the hike

The hike starts at Aria Spring, also called Fontaine d’Aria on Google Maps. The closest town is Filoti. If you are driving here from Naxos City, it takes about 30 minutes.

The last section of the drive is on a narrow road that hugs the edge of a hillside. There are no guardrails here so be careful. 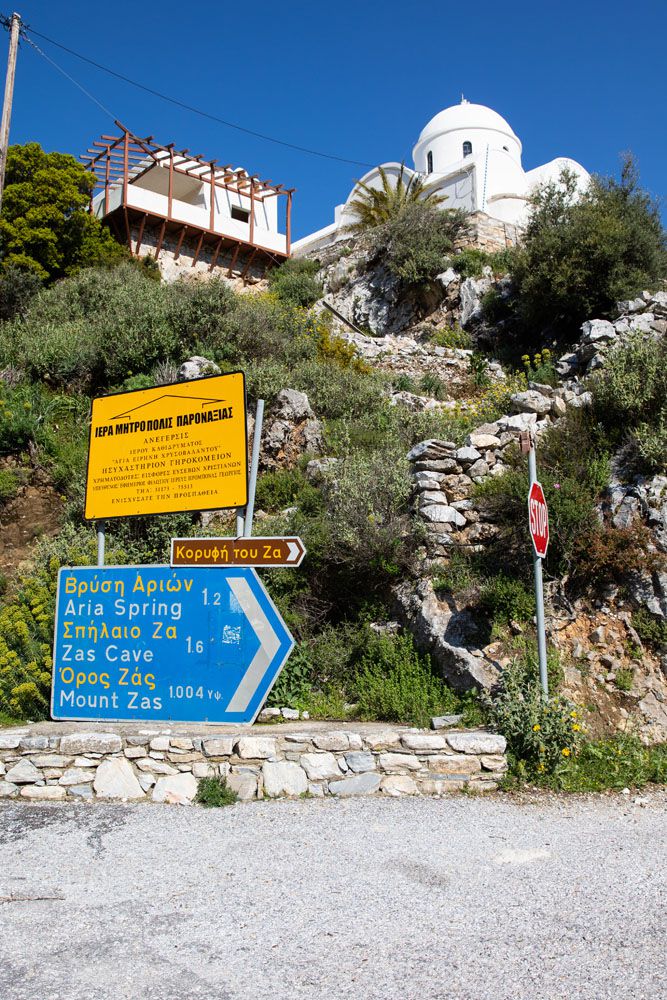 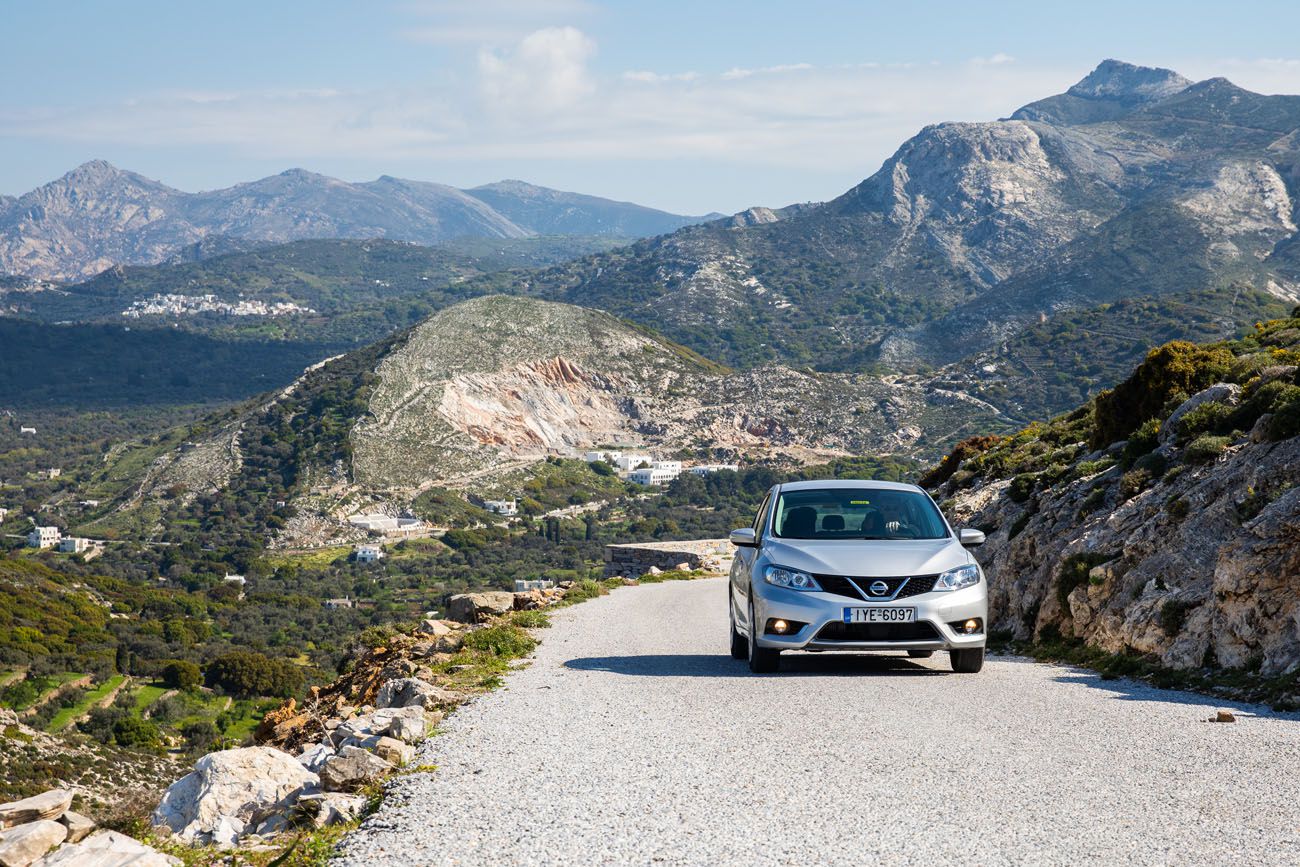 The road ends right at the spring. We were the first car of the day and we parked up against the rock wall at one of the widest sections of road. Just note that there is not much room to turn your car around. This will become even more challenging once the road fills with more cars. If you get here early, like we did, consider pointing your car back down the road so it’s easier to drive away once finished the hike. 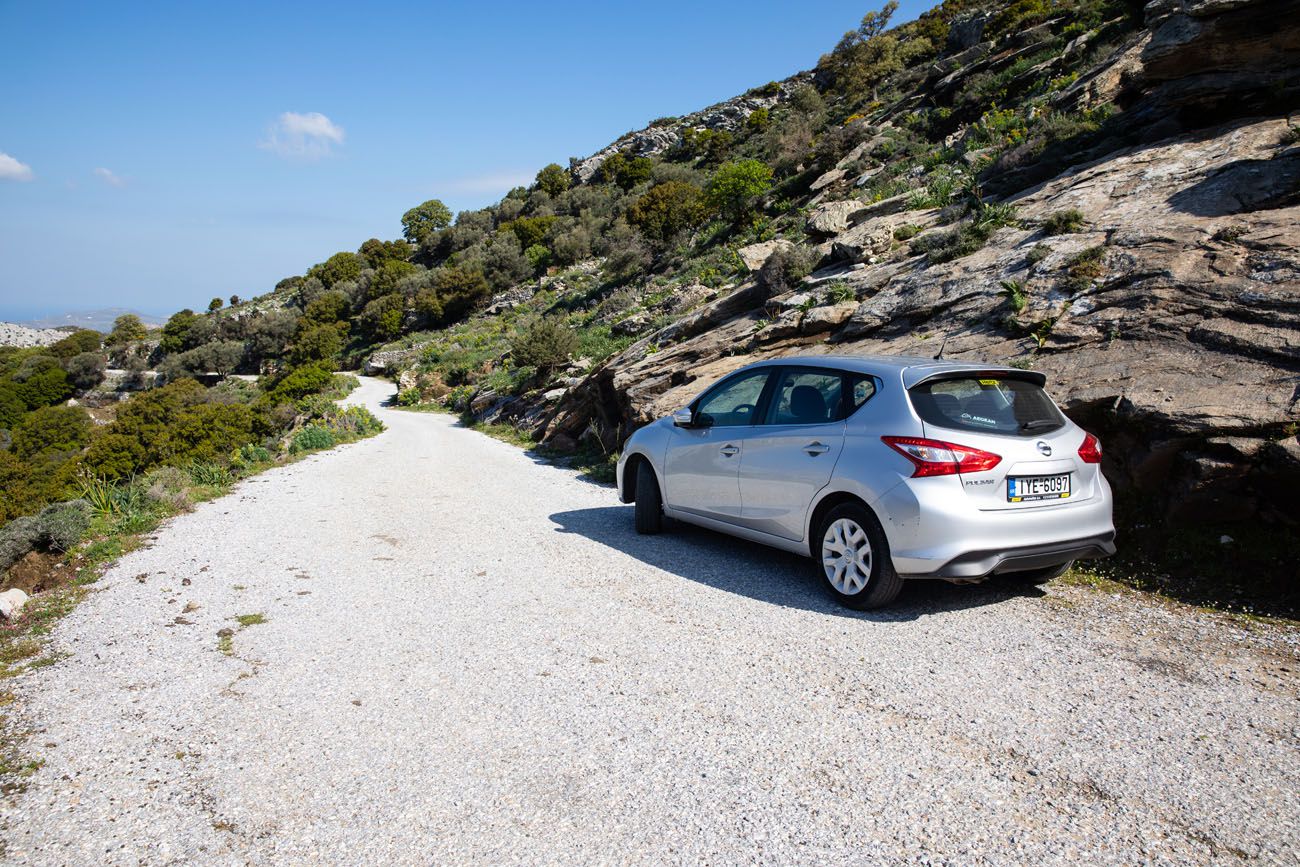 A short, paved walking trail takes you to Aria Spring. This is a natural spring and I read that you can drink the water directly from the spring. This is a pretty spot and there is also a goldfish pond here. 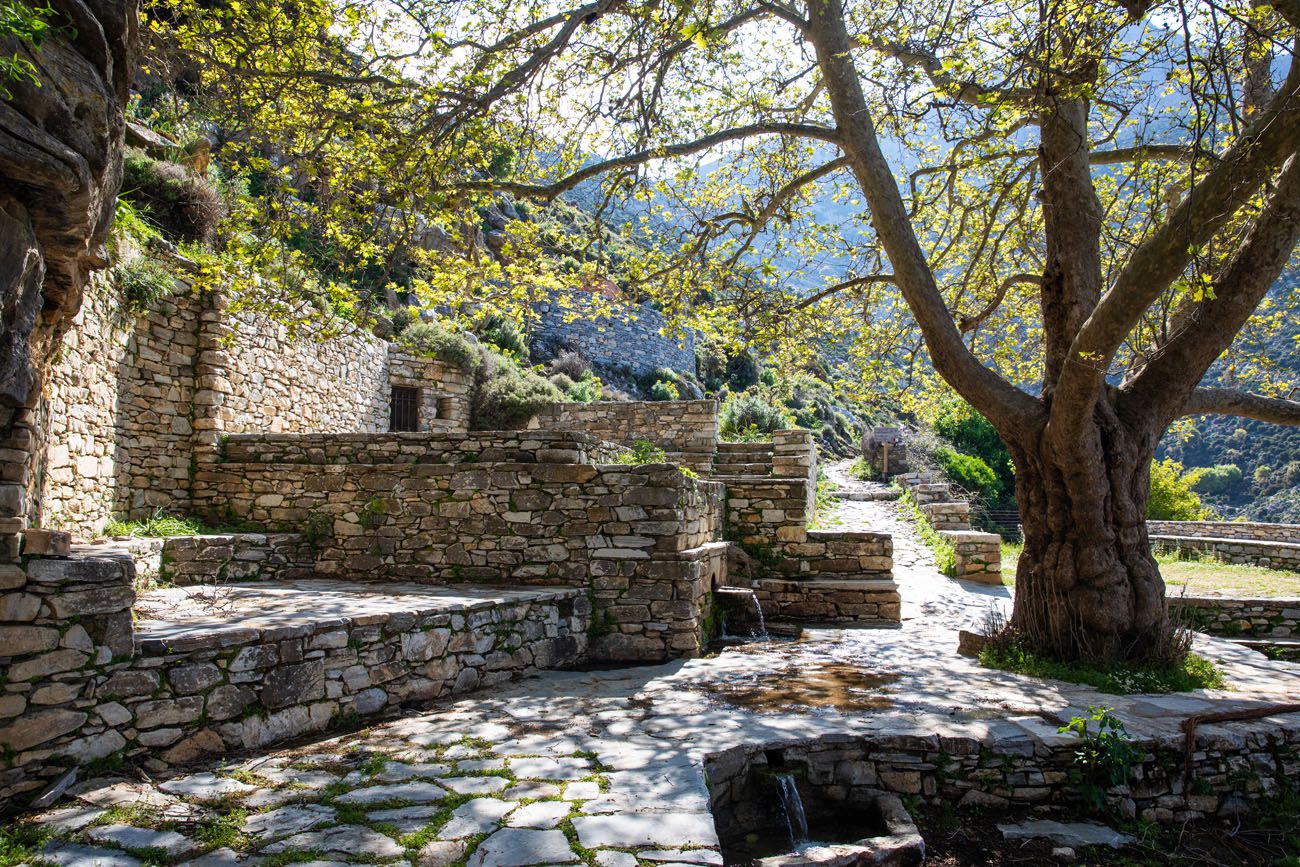 From Aria Spring, the trail starts to climb up the mountain. Mount Zas looms in front of you and it seems almost impossibly high from this point. You get an idea of how steep the trail will get, since it’s only 2.5 km (1.5 miles) to the summit. 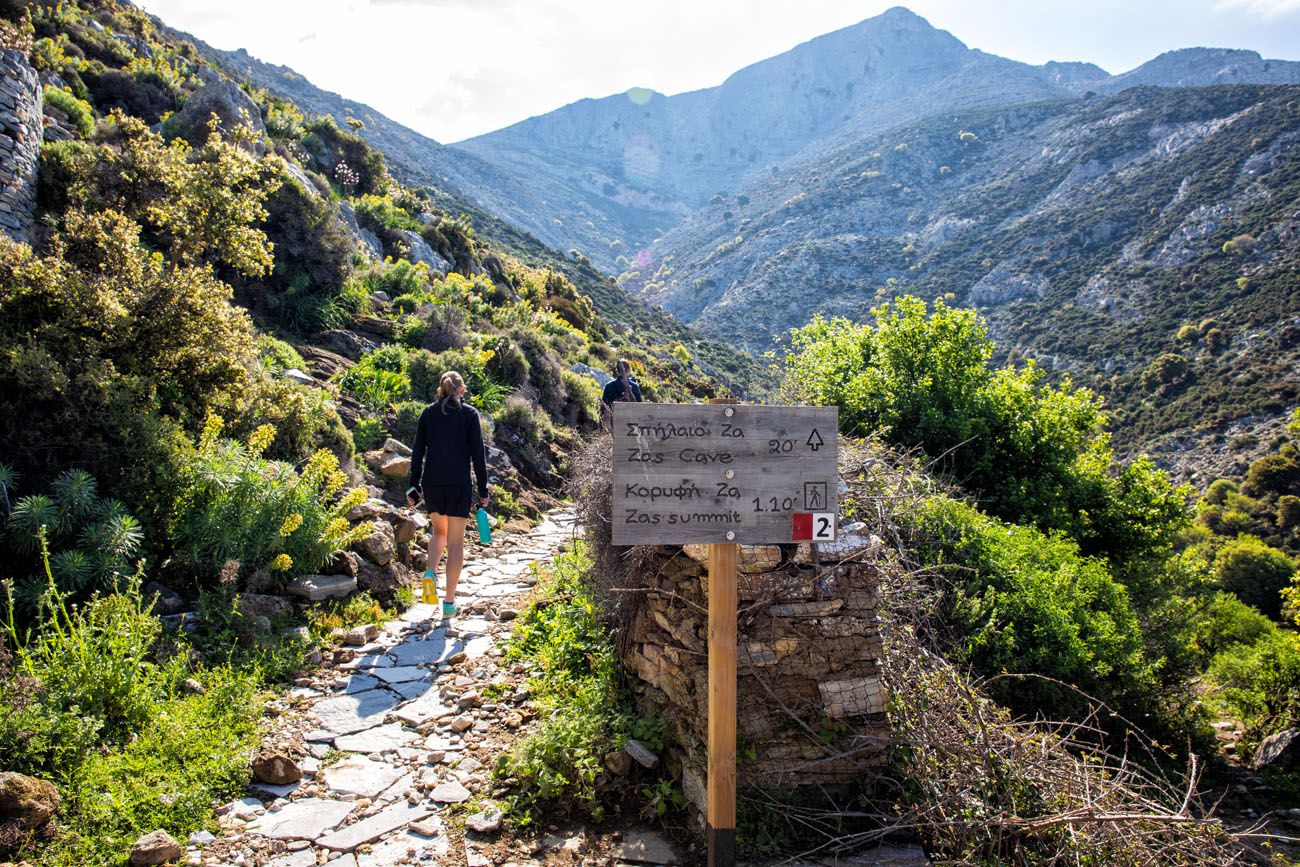 At first, the path is paved with marble rocks. It’s easy walking. 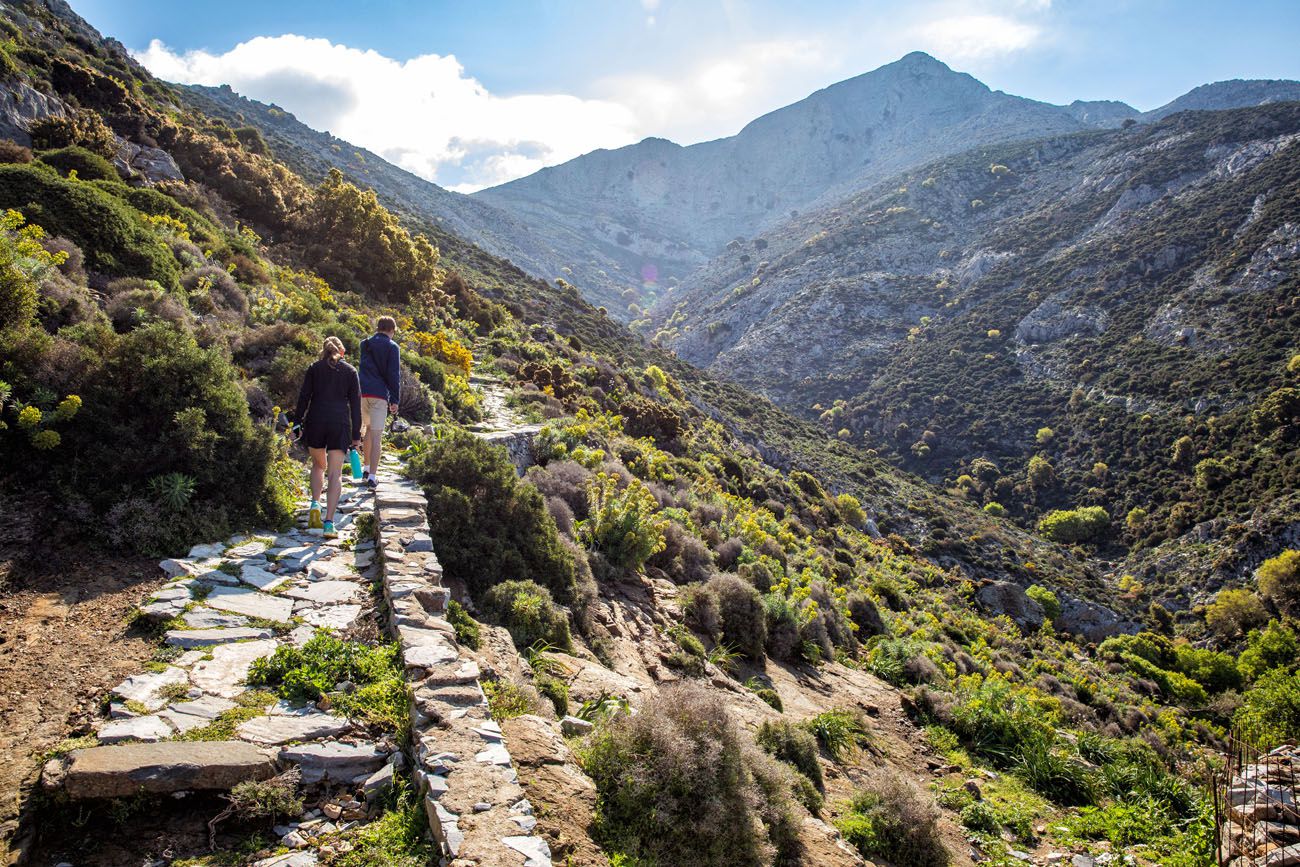 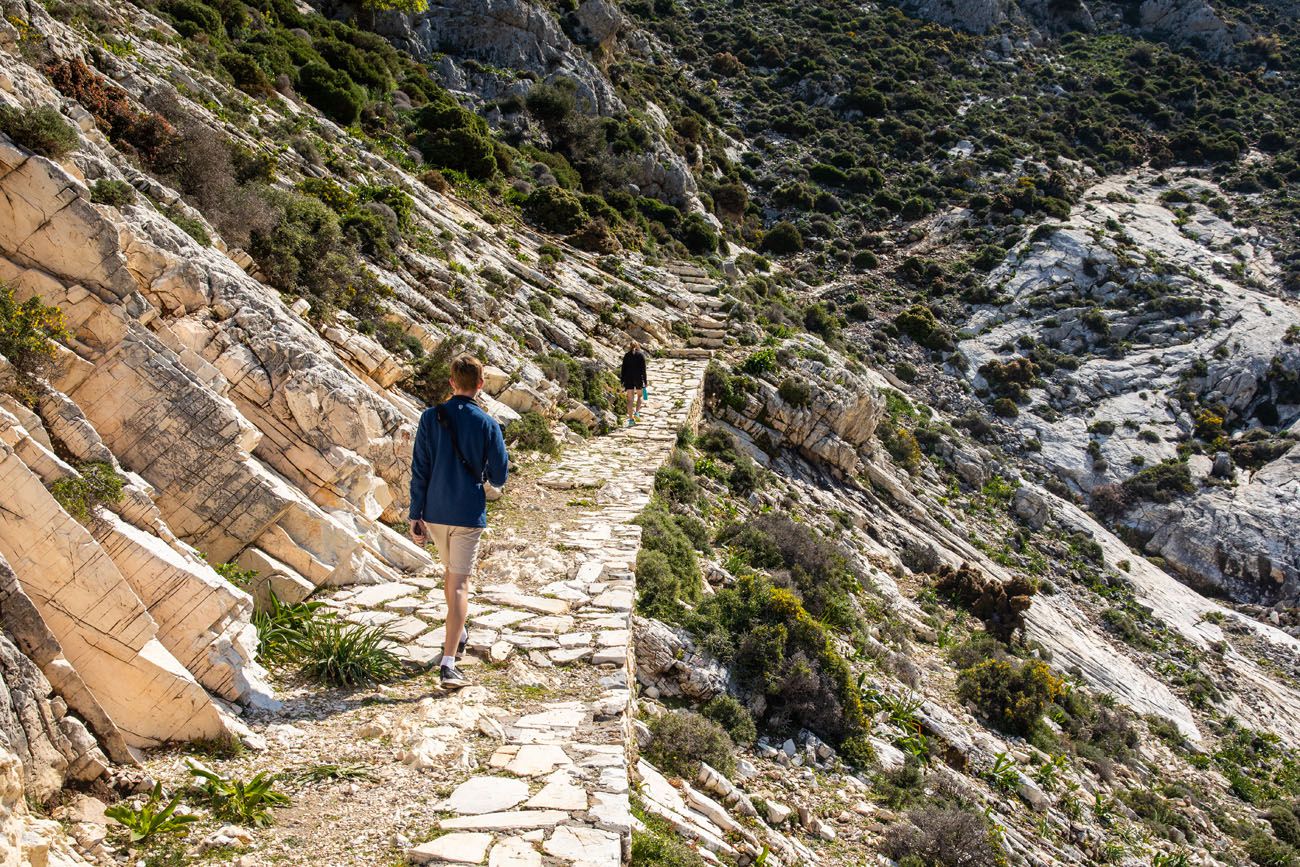 A short distance before reaching the Cave of Zeus, the marble path ends and a true hiking trail begins. The trail is easy to follow, but when in doubt, look for the rock cairns (stacked stones of rocks that serve as trail markers) or red blazes painted on the rocks.

From Aria Spring, it takes about 20 minutes to get to the Cave of Zeus. You can enter the cave and if you feel like exploring, I read that if you go in far enough, you can see stalactites and stalagmites. The flashlight on an iPhone is not bright enough to light the cave. You need something stronger, like a hiking headlamp or a flashlight. 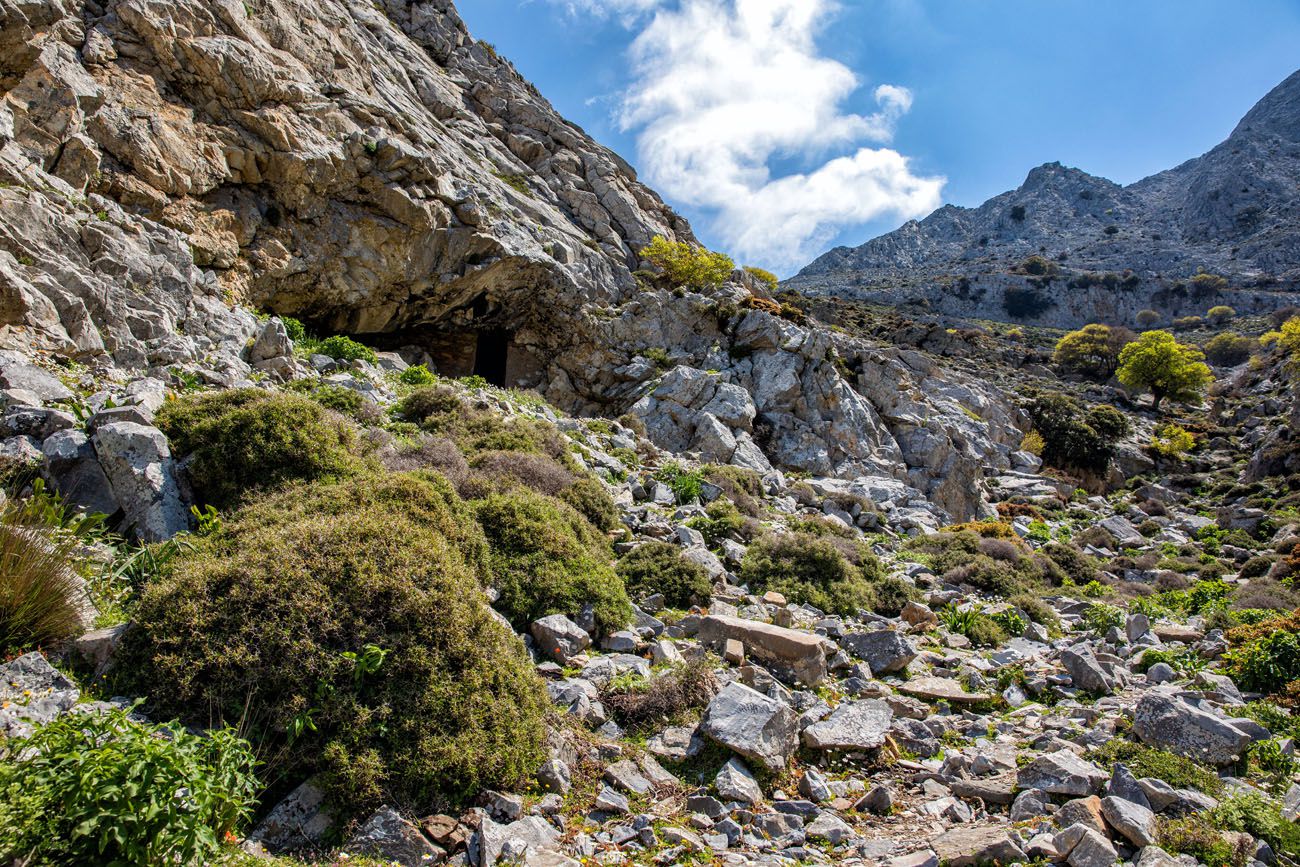 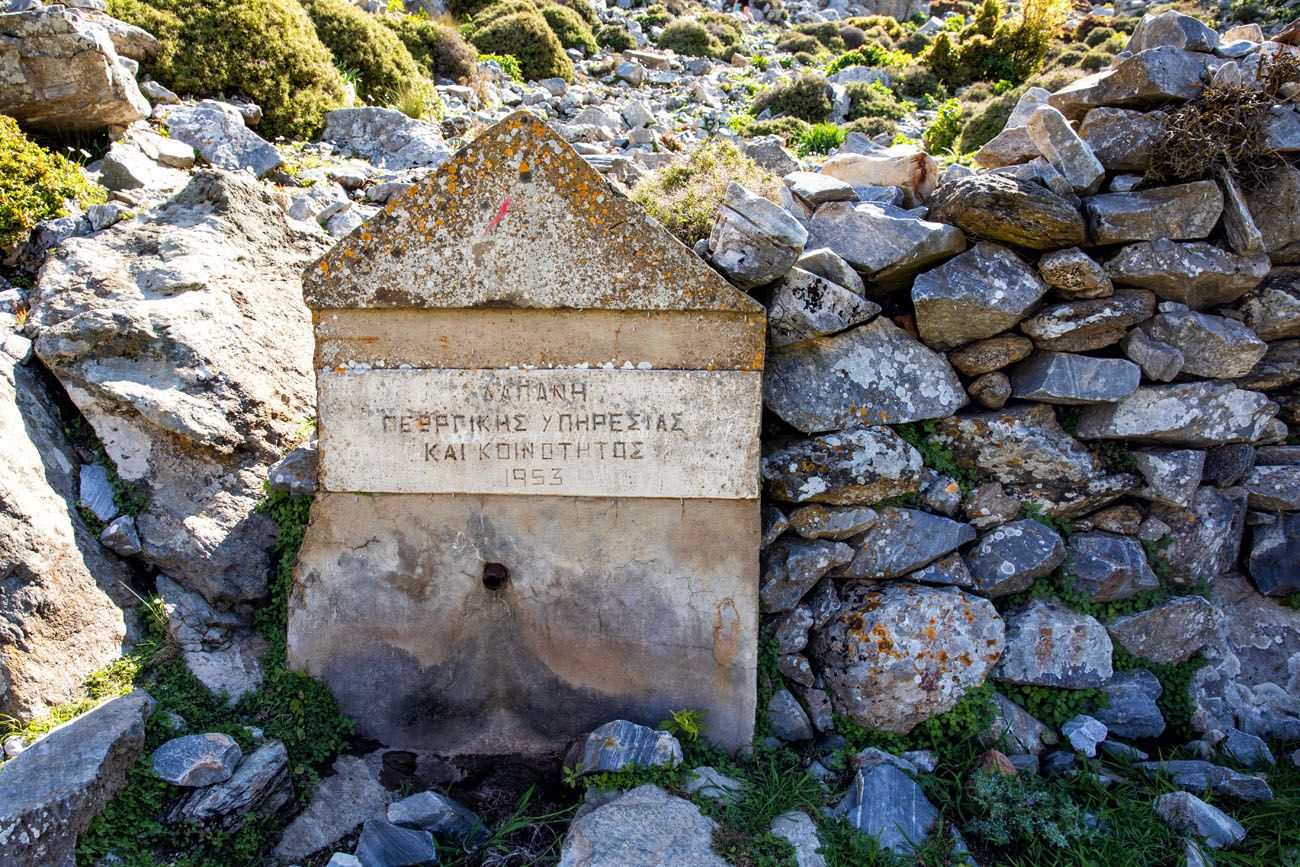 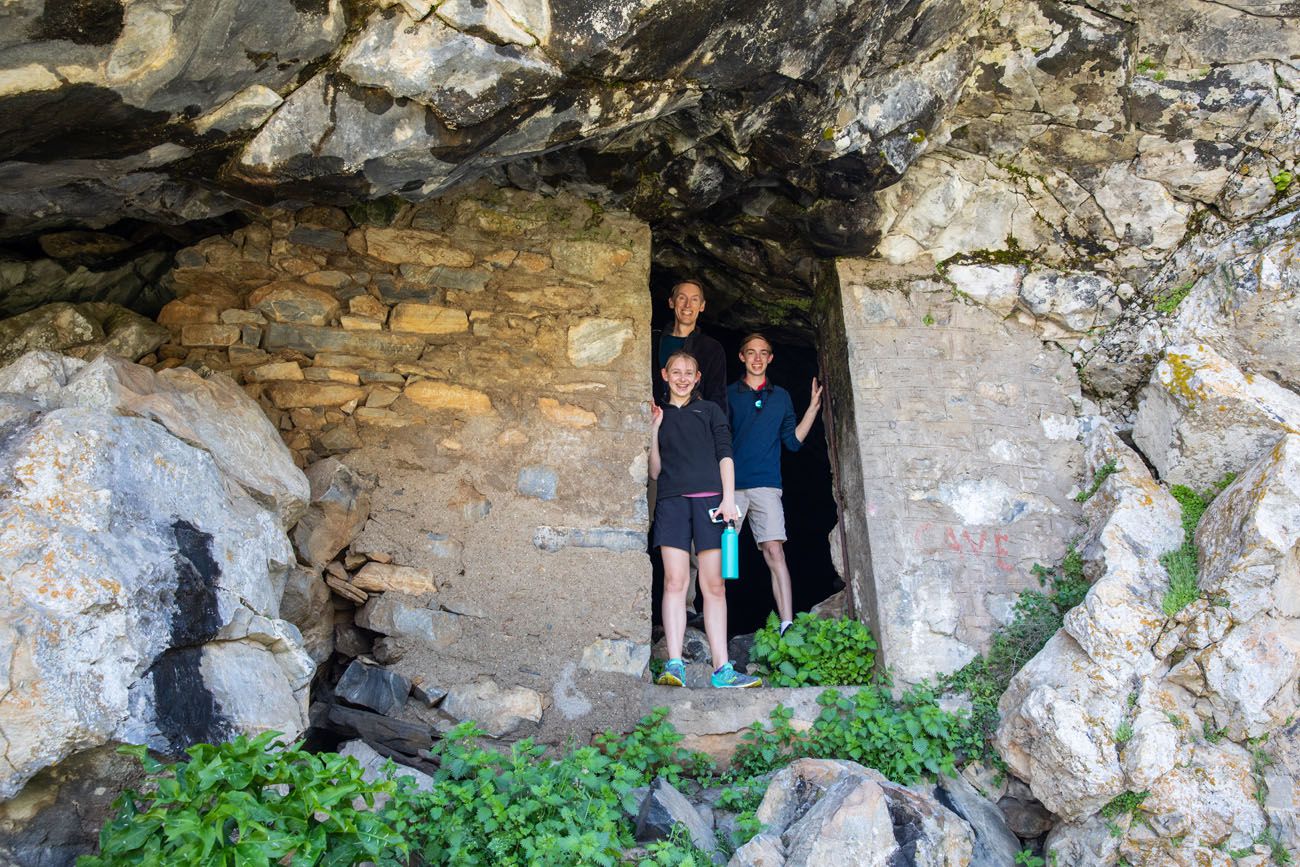 Hiking to the Summit

The next section of trail is the most challenging. It’s rocky, it’s steep and at times you might even need to use your hands to do a little rock scrambling. Also, beware of the short, prickly thistle bushes. These are covered with sharp thorns and really hurt if you accidentally grab onto them. We found out the hard way. 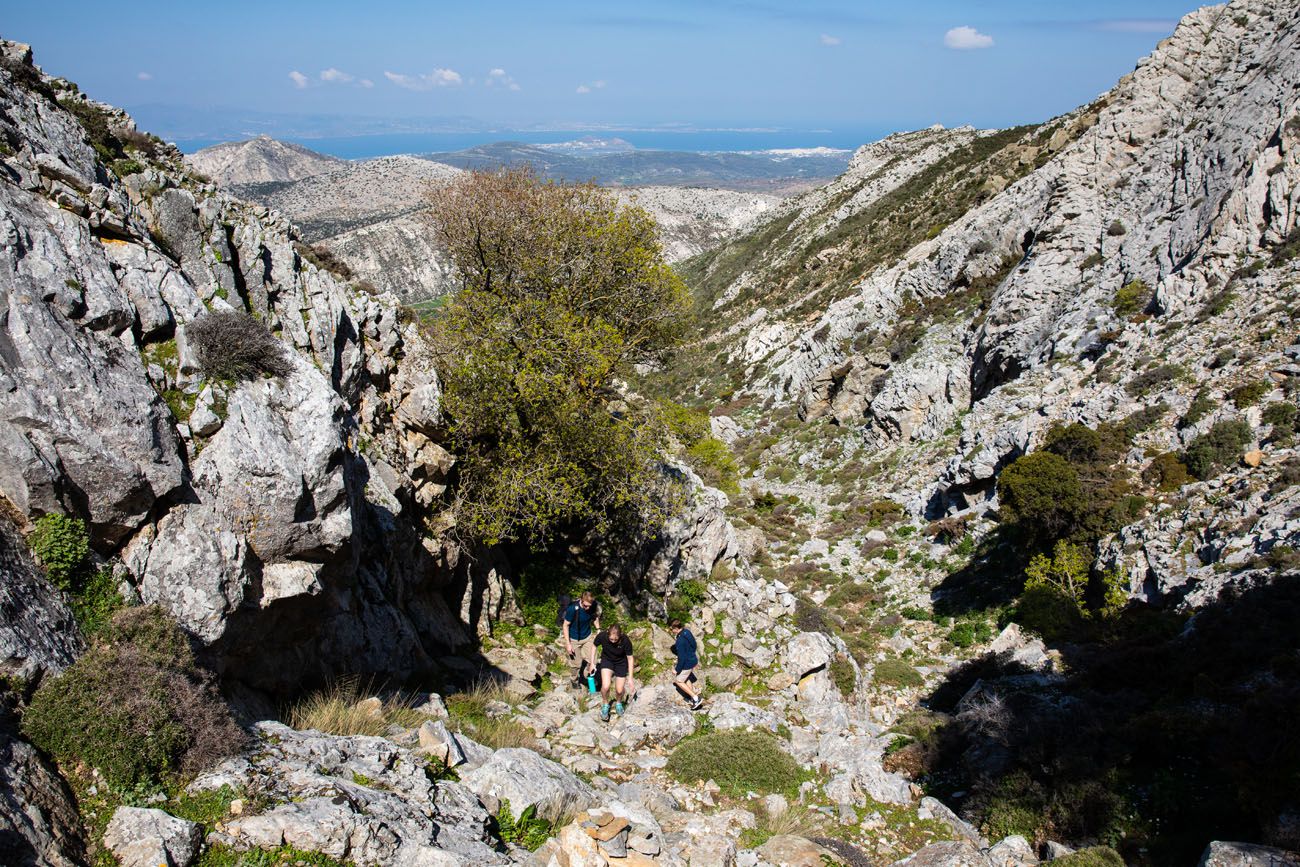 Looking down at the gully

About 10 minutes after you leave the Cave of Zeus, the trail will turn to the left. You’ll leave the rocky gully and hike up an easier trail.

There will be a short section where you walk on a bare, somewhat slippery rock face. Just beyond this, the view really begins to open up. From the trail, you can look out over the nearby villages and the hilly terrain of Naxos. The summit doesn’t look so far off and impossible from this point. 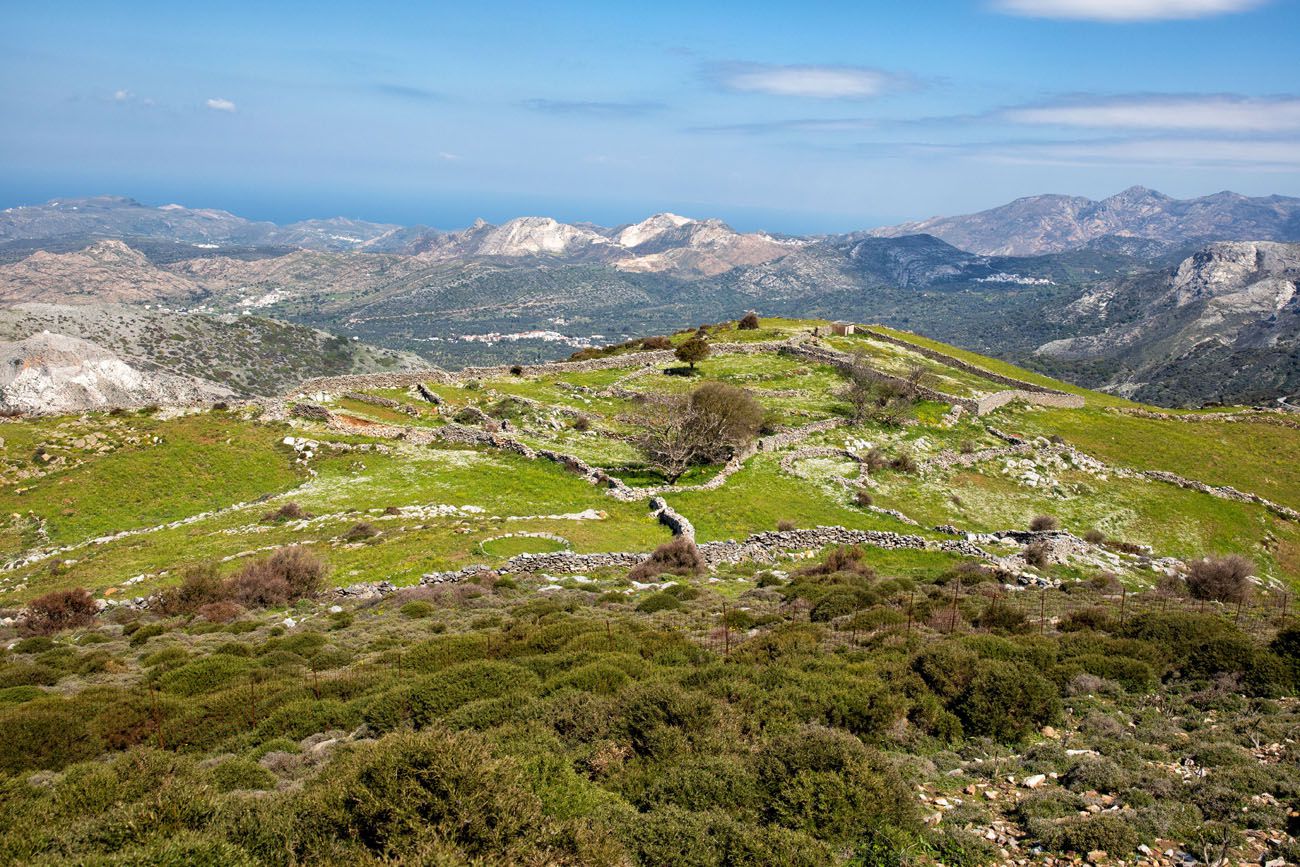 Now, it’s just a hike up a giant slope of scree and boulders until you get to the summit. The trail will join that of Aghia Marina and most likely you will see more hikers at this point. 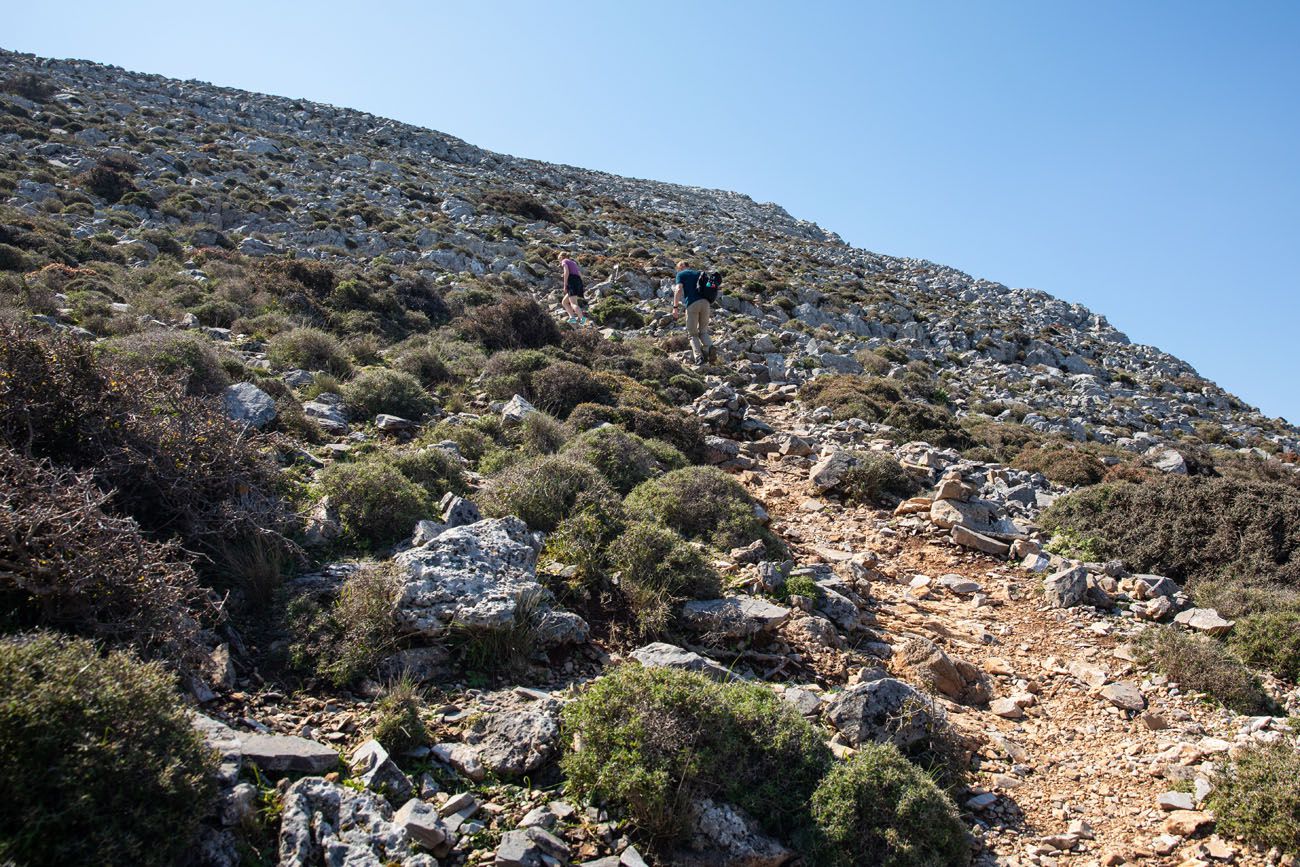 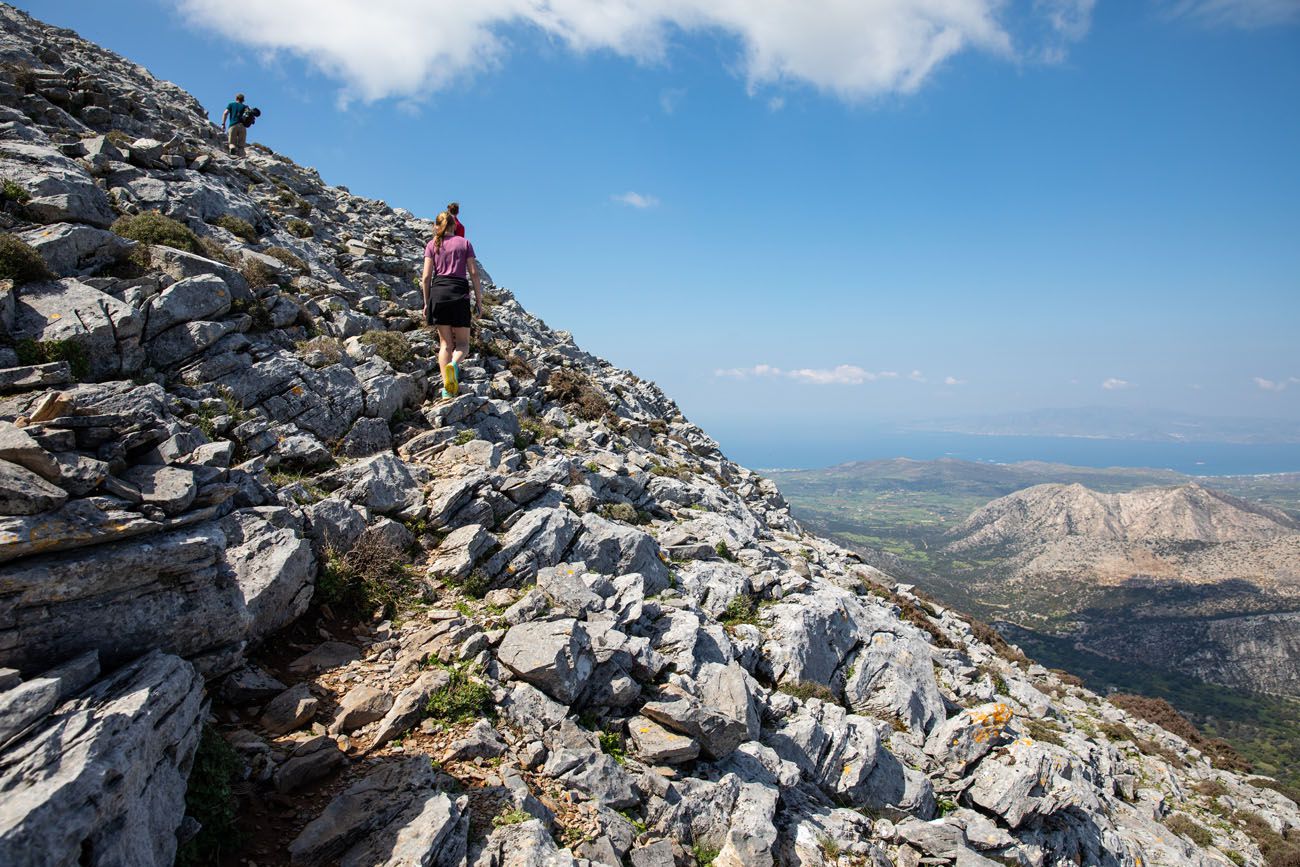 The Summit of Mount Zas 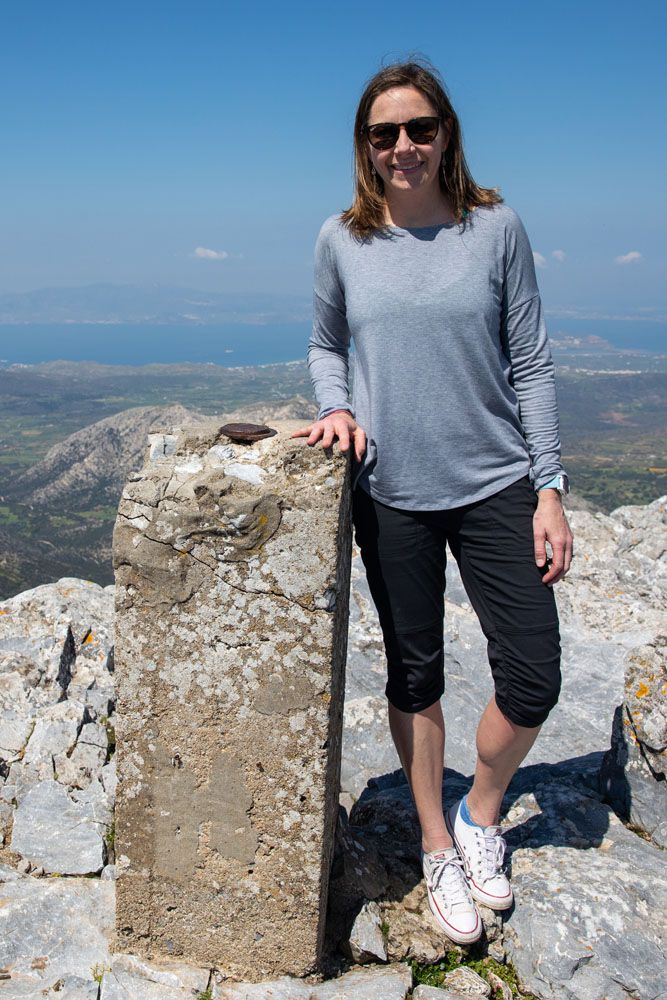 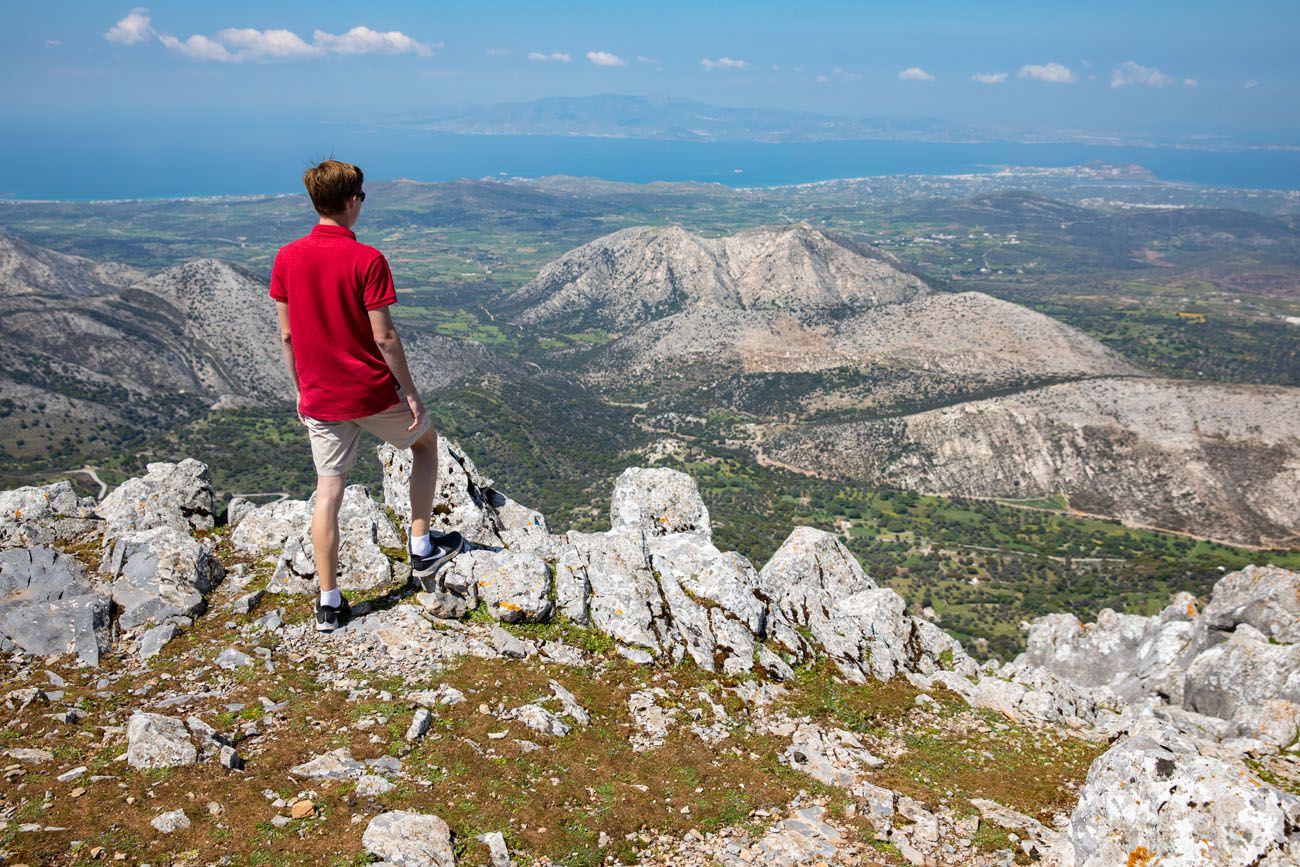 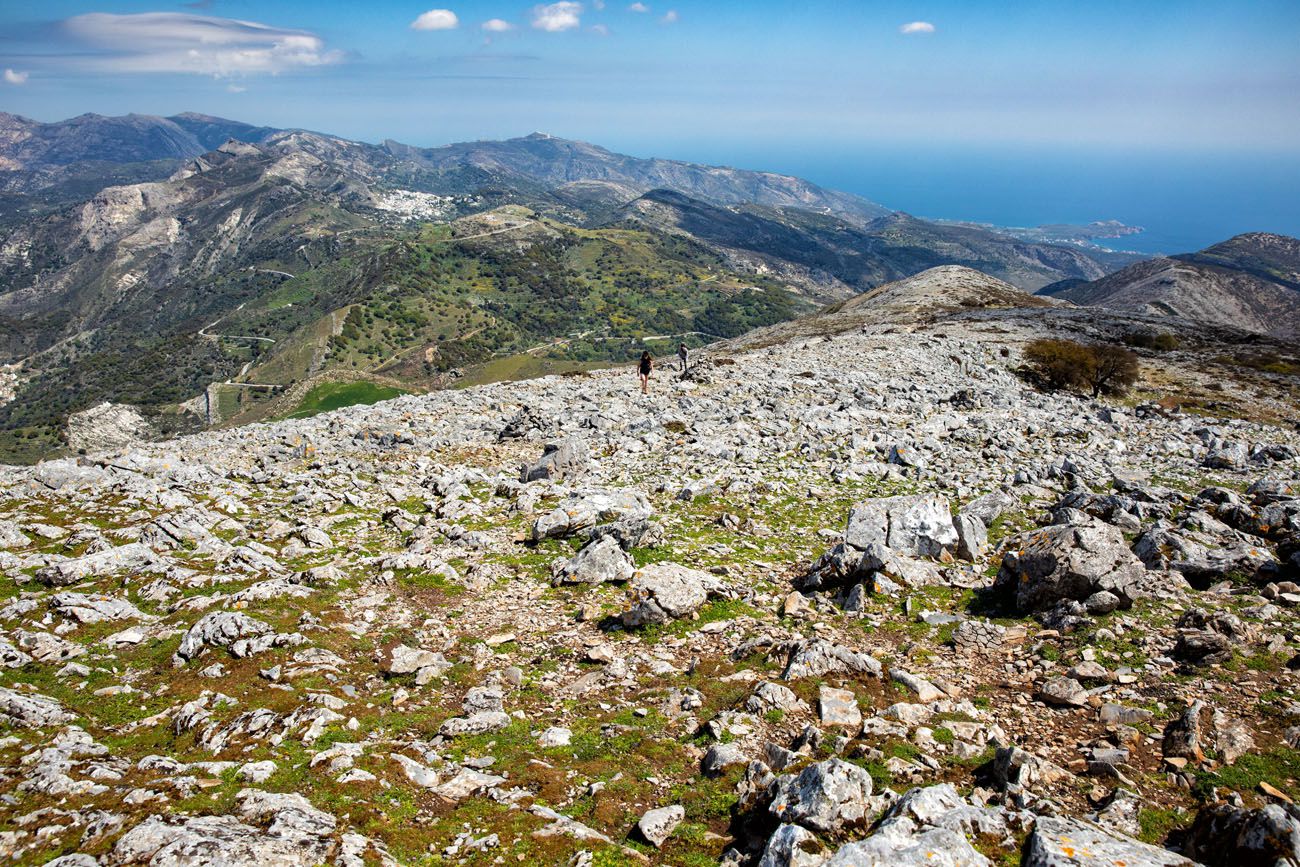 Looking back at the hiking trail from the summit.

To get back to your car, return the same way.

We did this hike in mid-April. The high temperature for the day was 15°C (60°F) so we had ideal hiking conditions. And since it was still the off-season, the trail was relatively quiet.

Tips to Have the Best Experience

Bring sunscreen and lots of water. During the summer, I recommend 2 liters of water per person.

The trail was a little difficult to follow just past the Cave of Zeus. It turns to left just before you get to a wide swath of rocks and gravel in the gully. We almost missed the turn. Keep an eye out for the red blazes and the cairns. Sporadically, there will also be small metal signs with the number 2 on them.

And watch out for the prickly thistle bushes. Those suckers hurt!!

Do you have plans to visit Naxos and hike Mount Zas? Comment below if you have any questions or if you want to share your experience.

More Information for Your Trip to Greece:

Planning a trip to Greece? Read all of our articles in our Greece Destination Guide. 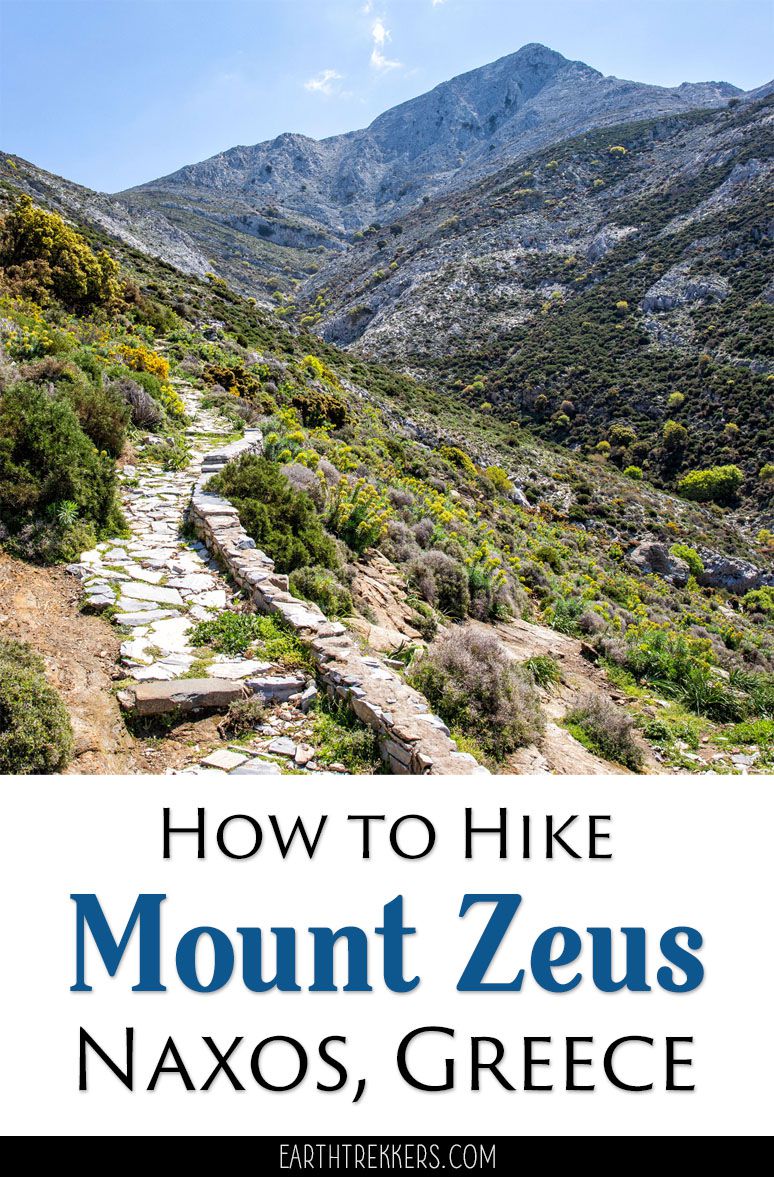