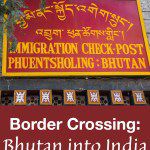 India…this is a country that we were both greatly anticipating but also a little nervous about. India is sensory overload. It’s in your face with its people, food, smells, sights, and sounds. On October 23, 2014, our five week journey through India began. We were traveling overland from Bhutan, having spent one glorious week in this tiny country nestled in the Himalayas.

We chose to travel overland, going by car from Paro, Bhutan, to Siliguri, India, in order to save money and to really experience what this part of the world is like. Traveling by car may not be as fast or as efficient as an airplane flight, but it can be an eye-opening experience.

The journey from Paro, Bhutan to Siliguri, India would take us ten hours, traveling 315 km on winding mountain roads in Bhutan to the flat, dry river beds of West Bengal in India.

The first part of our day took us through Bhutan to the Bhutan-India border. This journey, from Paro to Phuentsholing, is infamous for making people carsick, with its high mountain passes and unrelenting windy roads. Kara once again got to sit shotgun and was medicated with Dramamine. We were traveling with Lotay and Sonam with Bridge to Bhutan, our tour company for the week.

By noon we arrived in Phuentsholing, Bhutan’s border town. It was more tropical here and it looked like we were back in Nepal. Sonam, our driver, took our passports to be stamped out of Bhutan. As we sat in our van, we looked towards the Bhutan-India border. A large, ornate archway over the road separated Bhutan from India. From where we were sitting in tranquil Bhutan, how different things looked just on the other side…unpaved roads, crowds of people, rickshaws and tuk-tuks everywhere. 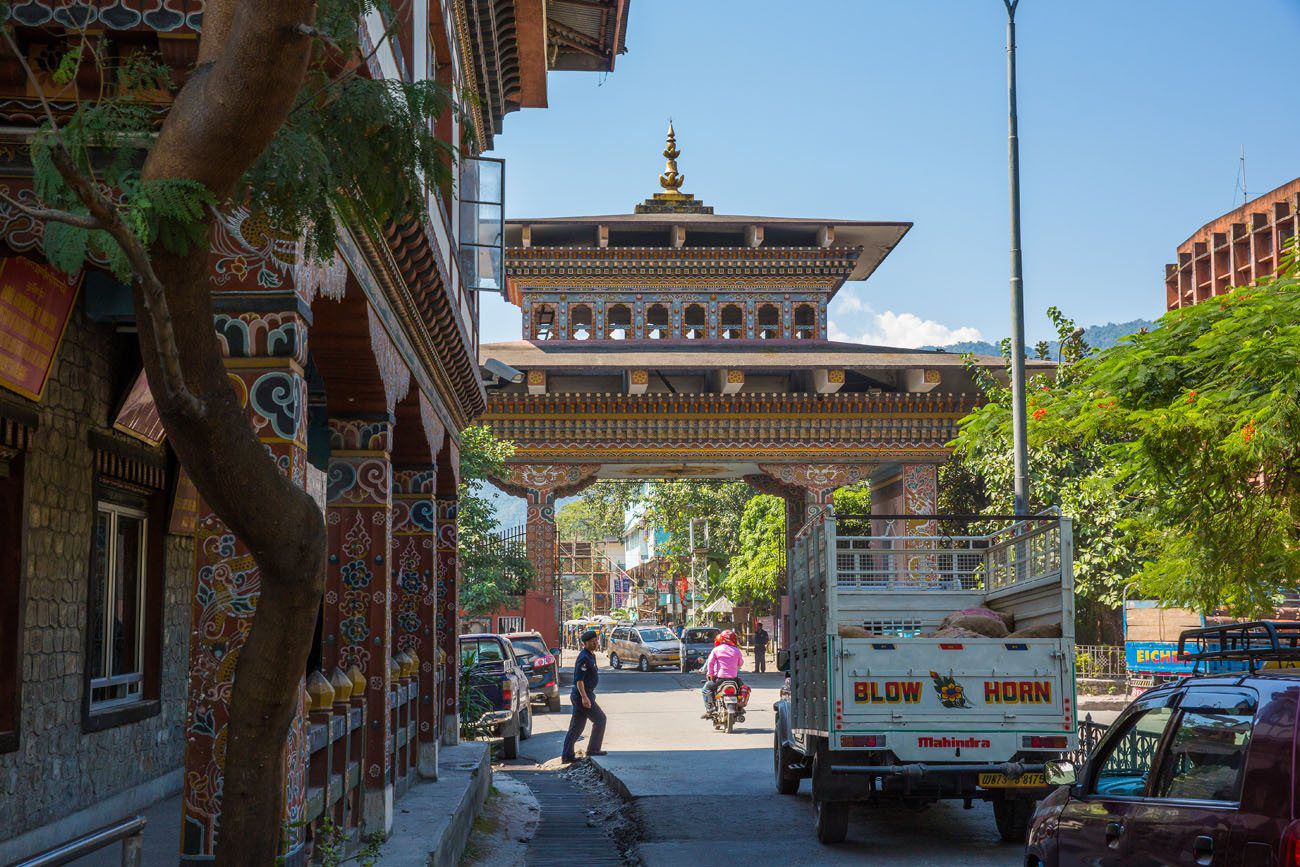 Honestly, I think we were all feeling just a little bit apprehensive about crossing over that line in the road. Things were about to change dramatically for us.

Sonam drove us into India (we’re in India now!) and on to the immigration office. It was Diwali, a major Hindu festival, holiday time here. Jaigaon, the Indian border city, was decorated with marigolds and banana trees, a stage constructed from bamboo sat in the road, and Indian music was playing on loudspeakers throughout the city. It was chaotic here, just as we expected. But we were feeling prepared (or at least we thought we were), especially after spending a month in Nepal.

At the immigration office, getting processed was fast and efficient, but we were the only ones there. This is not a town that sees a large influx of tourists.

The next stop was to the ATM for Indian rupees. Tim and Lotay waited in a very long line; it took about a half hour to reach the ATM. During this time, the kids and I waited in the van, sitting in the opening of the side door. People passing by looked at us like we were aliens. Since not many people travel overland between Bhutan and India I am sure we are a unique site. It felt unnerving to be stared at by so many people.

But we were as just as amazed…rickshaws and tuk-tuks streamed past us, large colorful trucks rumbled down the street, and people waved to us from their bicycles. The Indian music playing overhead on the loudspeakers added more ambience to the scene. It was overwhelming but oh so interesting. 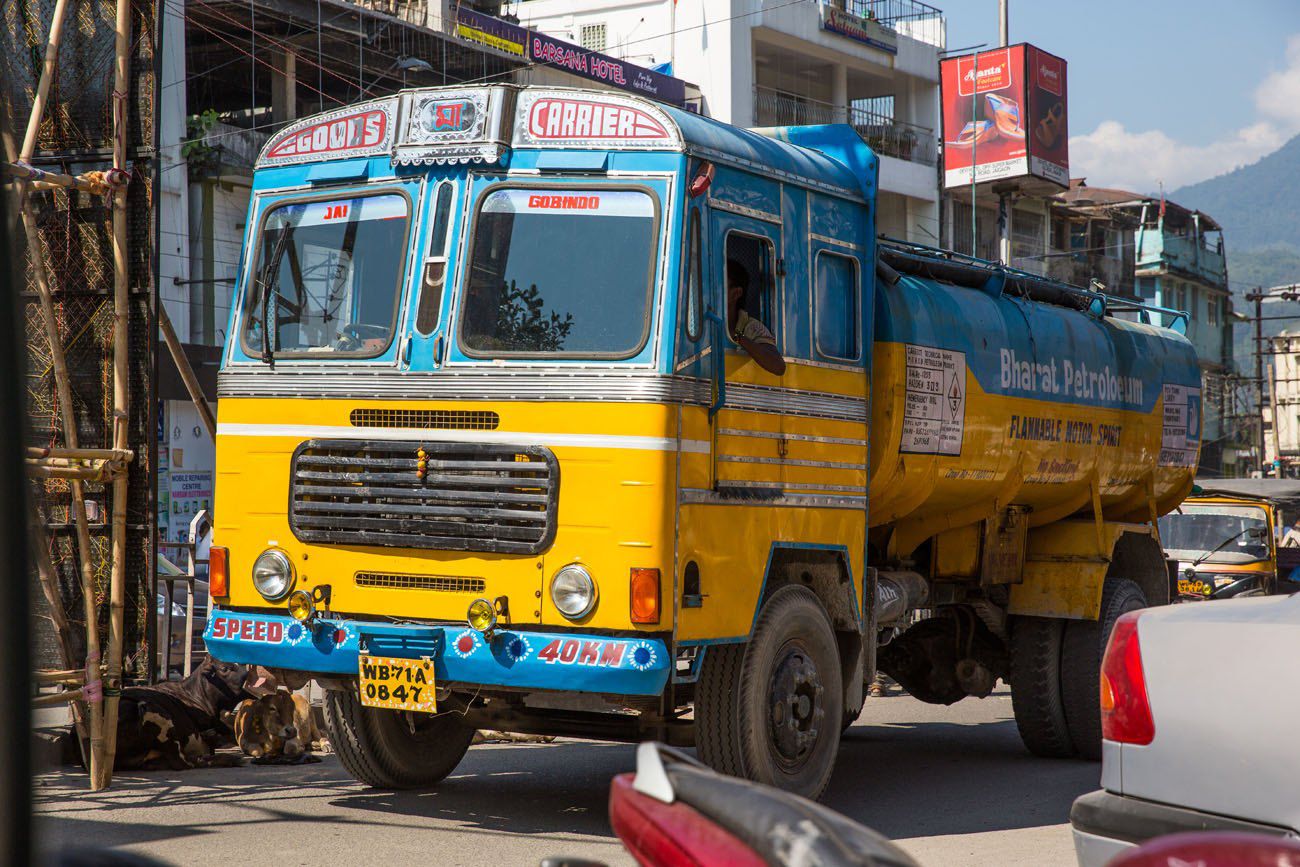 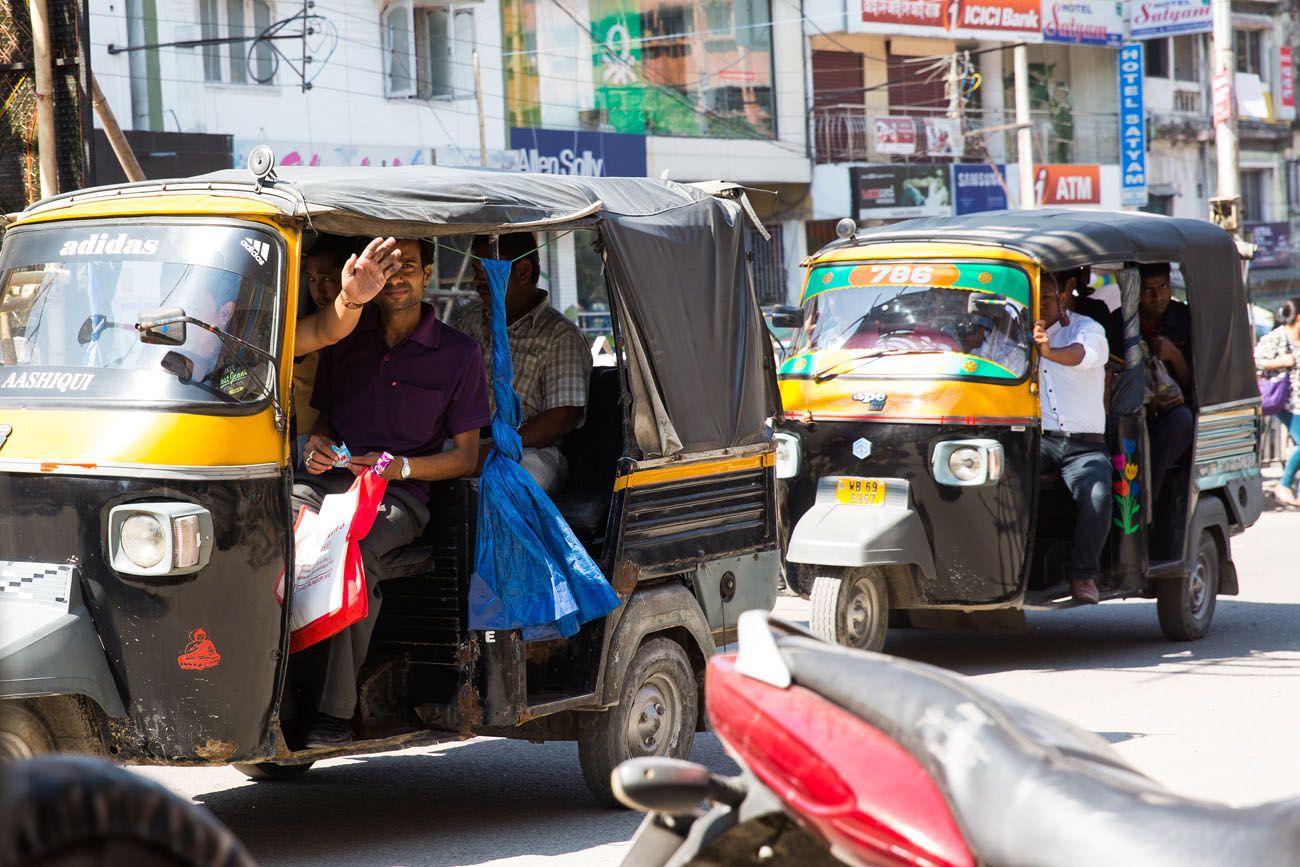 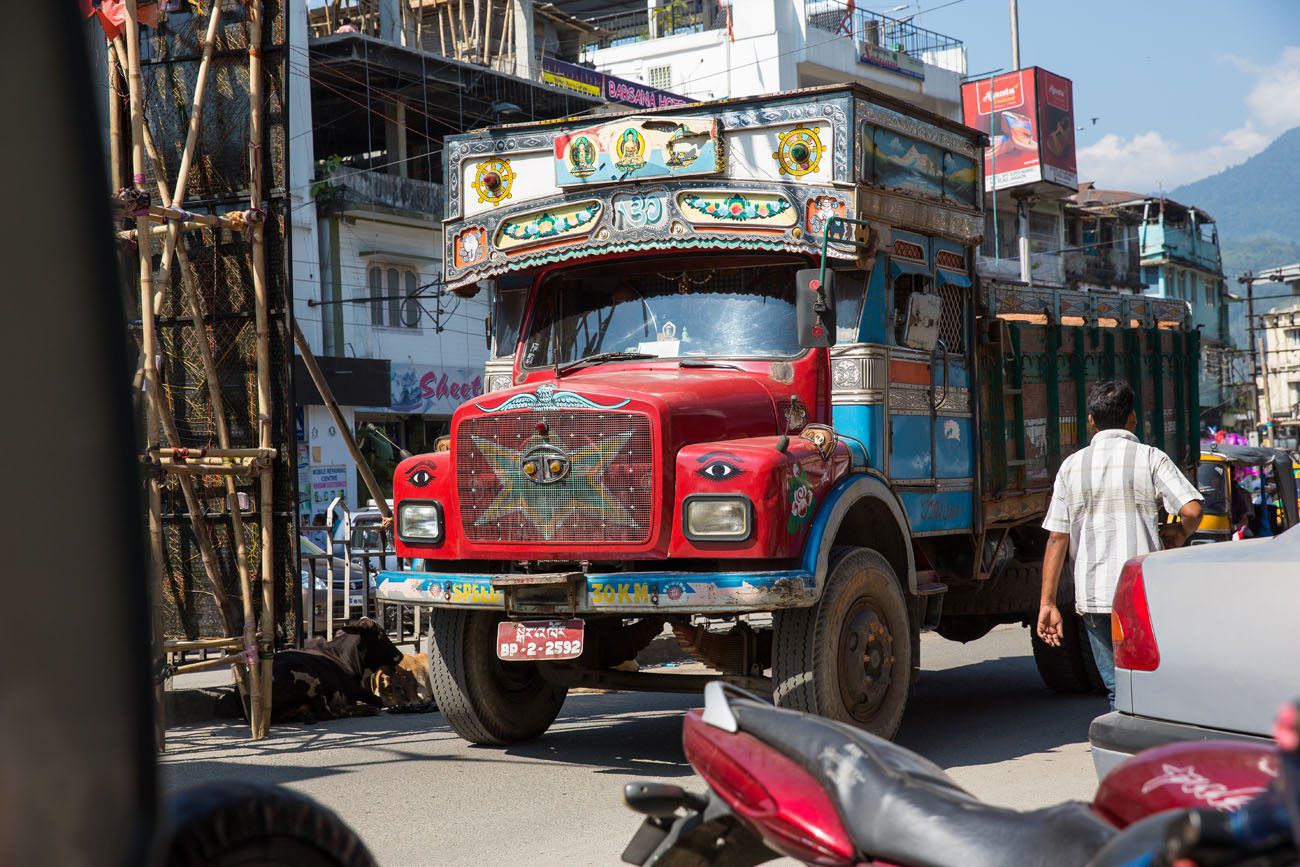 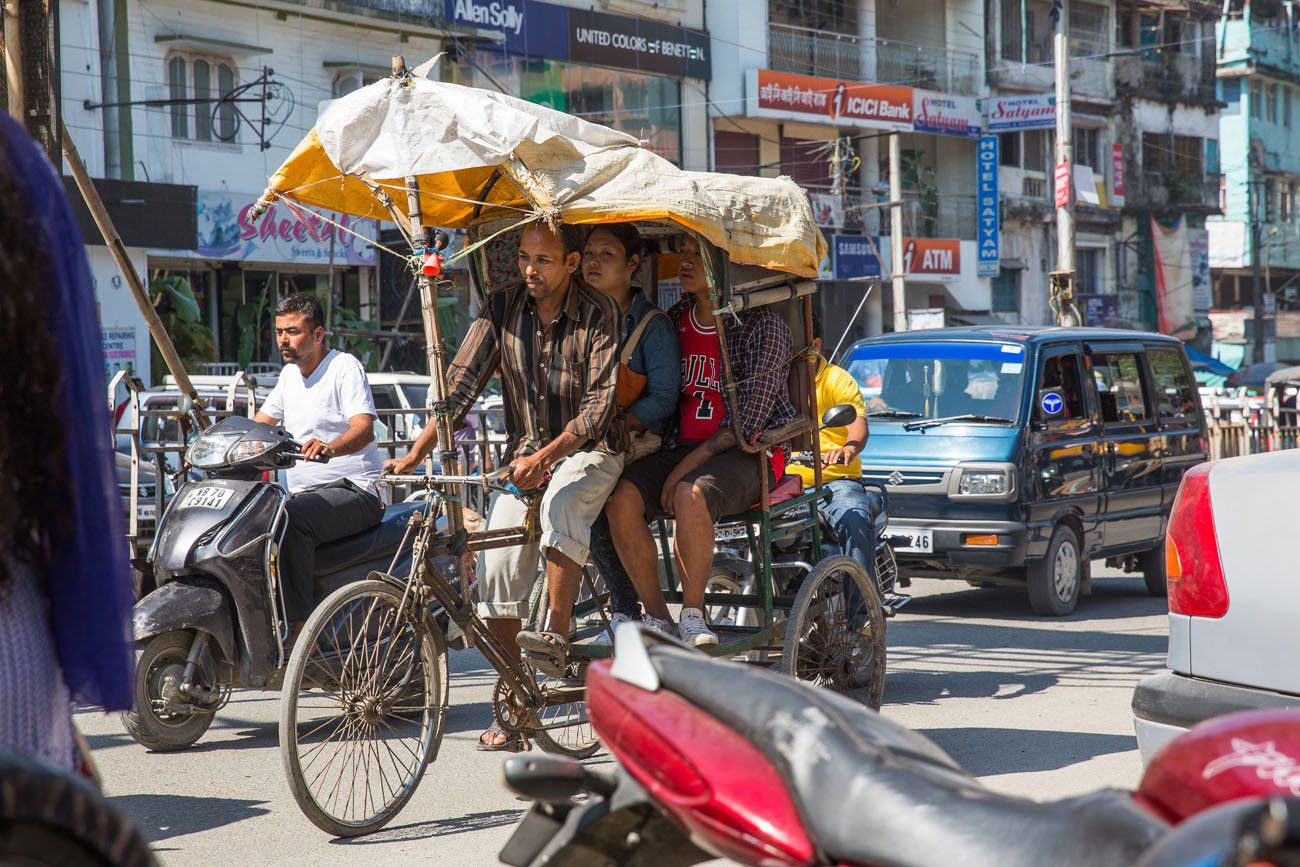 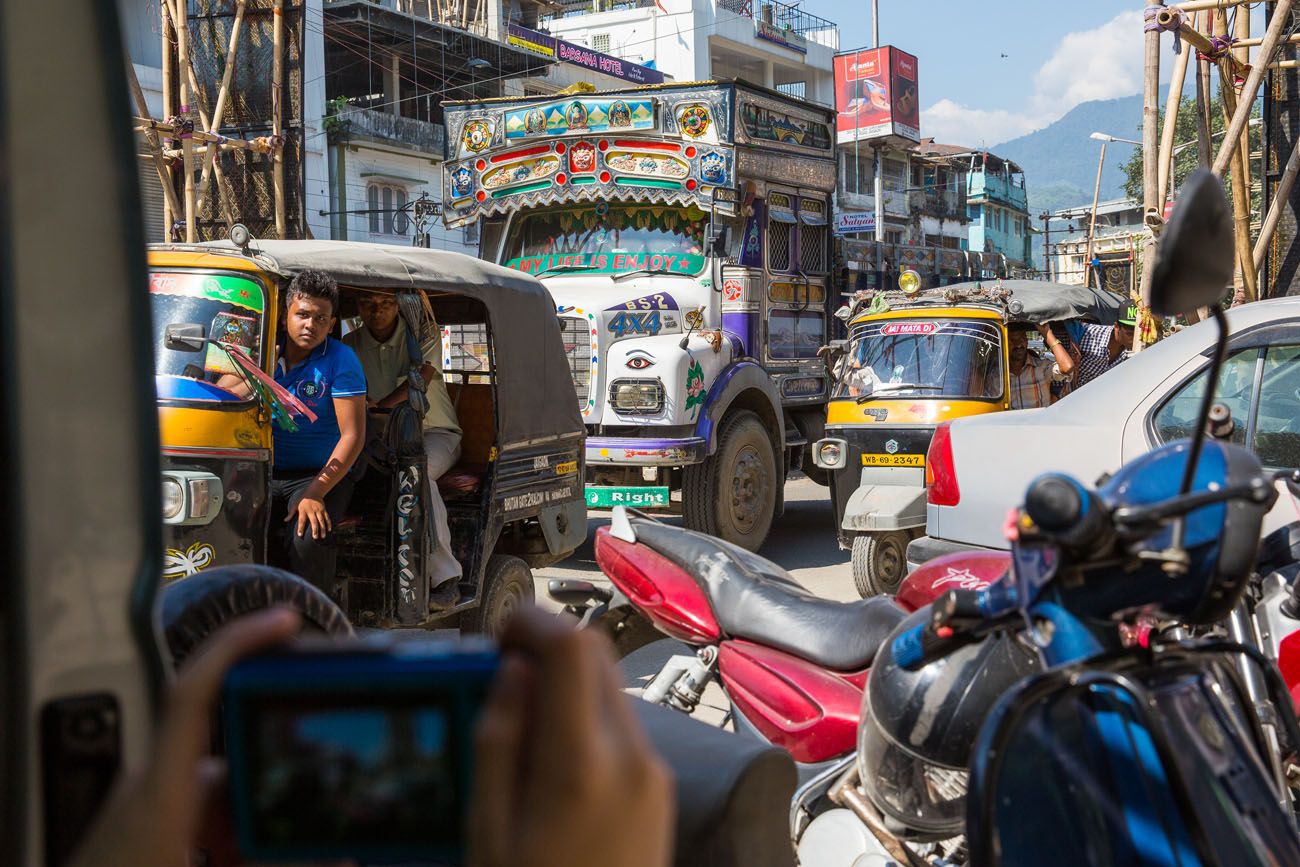 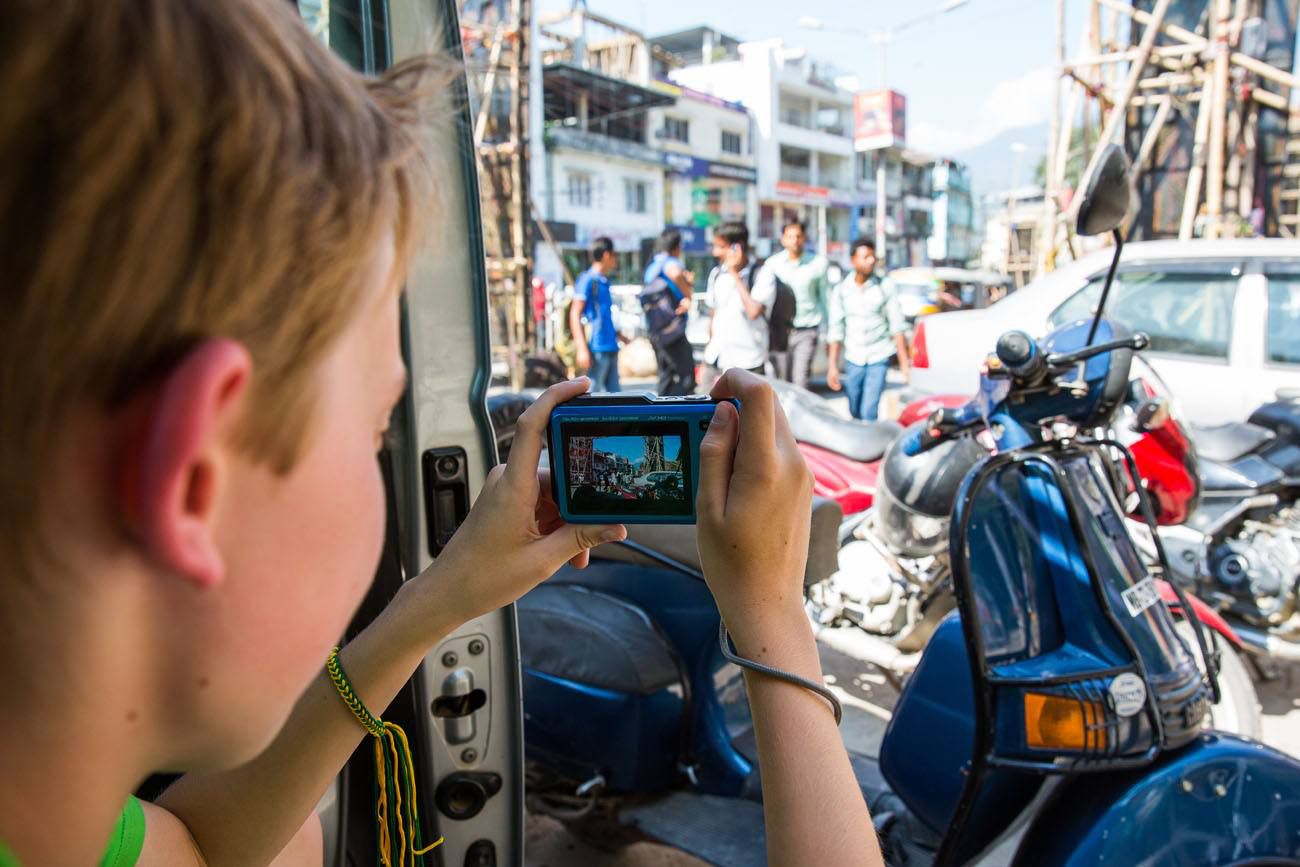 Sonam stepped away from the car and instantly an Indian man approached the kids and me, telling us his name, wanting to shake our hands, showing us his driver’s license, bank cards, and other items from his wallet. He kept wishing me “Happy Diwali.” It was all very strange and he hung around with us for quite some time.

Tim successfully made the withdrawal of rupees and then Lotay and Sonam found a taxi to take us to Siliguri, our final destination for the day. Before saying goodbye, Lotay gave us food and drinks for the road and souvenirs from Bhutan. Can they stay with us for the next five weeks, please? I was feeling overwhelmed…getting through five weeks in India now seemed like a daunting, but also thrilling, task.

From Jaigaon it was a three hour drive west to Siliguri (which Tim and I affectionately call “Silly Girl”). The kids and I took the back seat and Tim sat up front with the driver.

It was a flat drive through small towns and over dry river beds. Our driver was relatively safe, for Indian standards, but this is not to say that we did not have many near miss head-on collisions. Our driver was constantly blaring the horn. It was ridiculous how freely he was using it. Most of the time it was a warning to people and cows not to cross the street in front of us, but maybe he just liked the sound of the horn. At one point our driver began coughing very fitfully, lasting fifteen to twenty minutes. 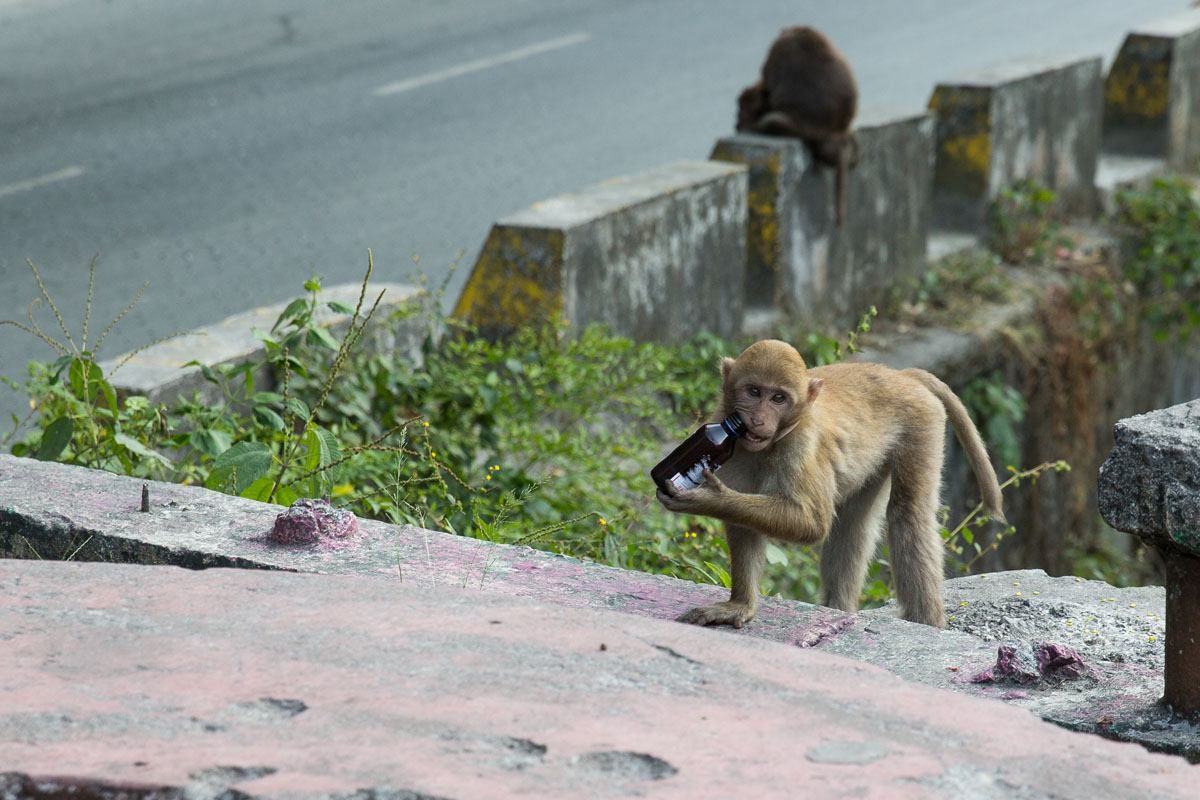 At 4:30 pm we arrived in Siliguri. Crowded streets, people everywhere, similar to Nepal, but different. Many shacks, buildings, and shops were decorated for Diwali, a five day Hindu celebration, and today was the main day. With some asking around, our driver found the Hotel Tourist Inn, located just off the main road. This hotel was also decorated for Diwali. 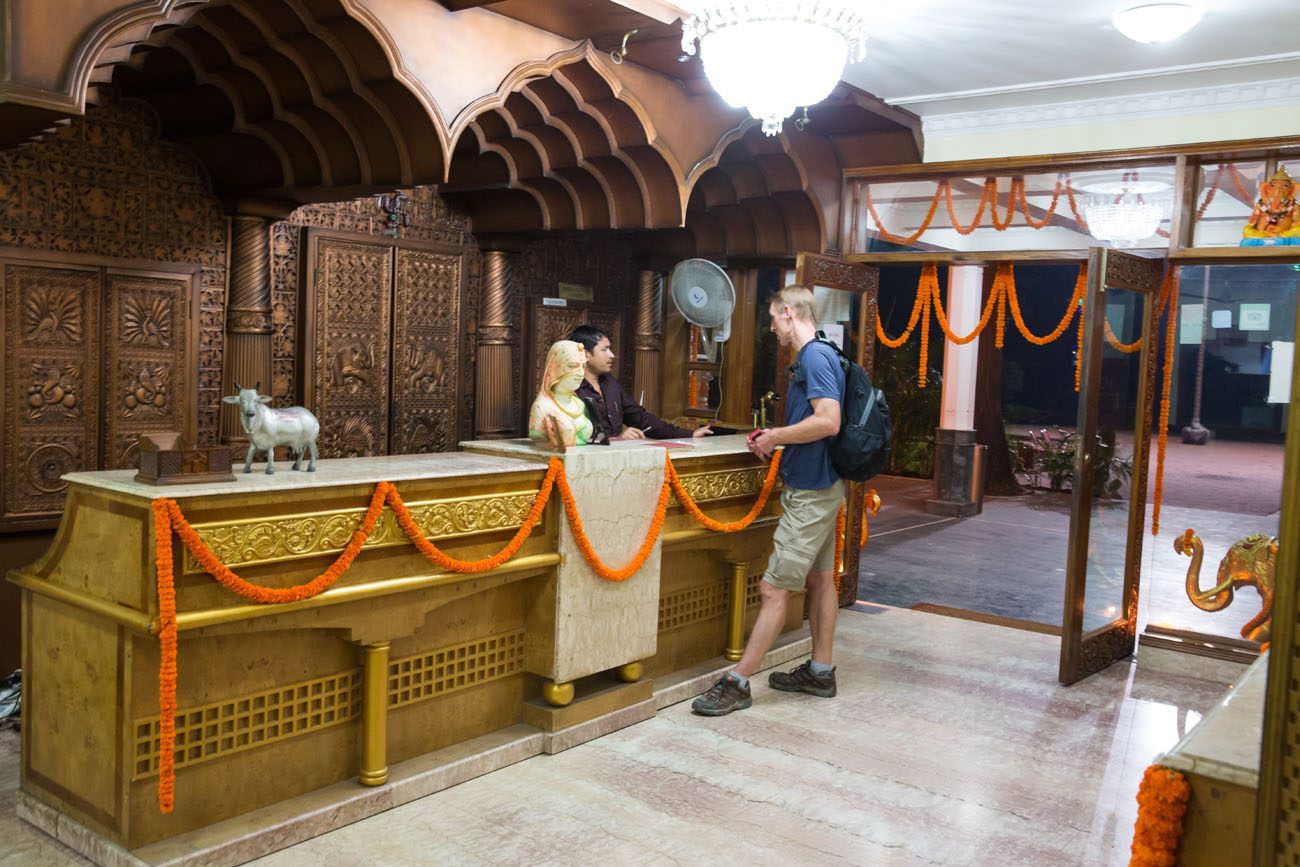 We were shown to our room, a small room with a nasty, smelly bathroom. Two extra mattresses were added to the floor, eliminating most of the floor space, but this is becoming the norm for us. They did have working wifi and a small TV, so this made it better.

At 6 pm we all left the hotel for dinner. Our first meal in India was going to be Pizza Hut. After a week in Bhutan (a country that is awesome in so many ways except for the food), Tyler and Kara needed western food so badly and Tim was able to find a Pizza Hut within walking distance of our hotel. The pizza and bread sticks were similar to those at home, just what our kids needed. I was looking forward to many meals of Indian food but would have to wait just one more day.

Siliguri was in full festive mode as we walked back to our hotel. People were hanging out along the roadsides, the city was aglow with strands of Christmas-style lights everywhere, and people were lighting off fireworks. We watched as one guy lit a firework on the side of the road, right into the branches over his head, lighting the tree on fire.

As we crossed the street, we were standing on a grass-covered median. As we crossed to the other side, Kara started saying “Ow! Ow!” and grabbing her ankle. She was bitten by one or more ants (we think), at least eight times on her ankle, deep enough to draw blood.

After that, we made it uneventfully back to our hotel. The fireworks continued in the city well into the night. Just outside of our window, in the hotel courtyard, was a group of ten men lighting fireworks and capturing the action on their phones. At first it was very cool, watching their fireworks. But as it got later into the night it began to get very annoying. I am fairly sure we were the only guests in the hotel. So why couldn’t they have put us into a room not facing the courtyard?

Fireworks continued until midnight and then the place got quiet. Not too bad. From 10:30 on Tyler and Kara somehow managed to sleep through the ruckus.

And our journey through India has just begun!

BHUTAN: Learn how to spend 7 days in Bhutan and how to hike to the Tiger’s Nest. For all of our articles about Bhutan, take a look at our Bhutan Travel Guide.

FAVORITE EXPERIENCES IN INDIA: Our favorite experiences in India was visiting Darjeeling during Diwali, seeing the Taj Mahal, trying street food in Mumbai, going on a camel safari in Jaisalmer, and walking through Old Delhi. 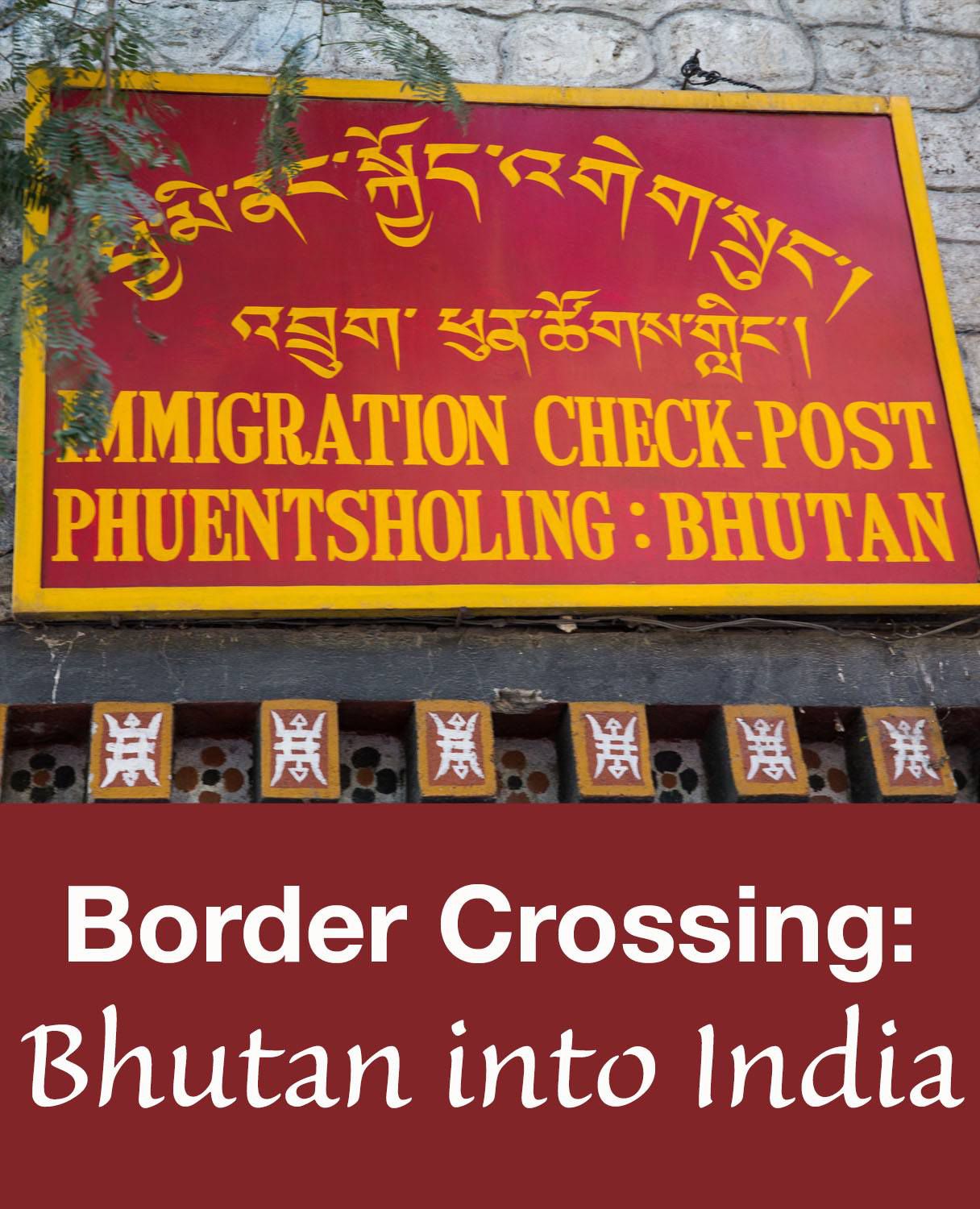