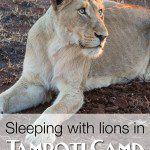 Kruger National Park is South Africa’s largest and most famous wild animal park. There are many rest camps to choose from during your stay. Here is our experience at Tamboti Tented Camp.

Kruger National Park is home to the Big Five (elephant, leopard, buffalo, rhinoceros, and lion) as well as other popular animals such as cheetah, giraffe, baboon, and many, many more. This is a self-drive park, meaning anyone can get in their car and drive down the roads, looking for wildlife. There are also plenty of options to take guided safaris, at all hours of the day, traveling by safari jeep or even by foot. During our time at Kruger, we did a lot of self-driving, but also took a guided sunset drive.

This is a very large safari park, spanning over 200 km from north to south and 50 km from east to west. There are numerous rest camps to choose from, depending on the type of wildlife you want to see and the level of accommodations you want to stay in.

Our first accommodation in the park was safari tents at Tamboti Tented Camp. This rest camp is one of the smaller camps located on the western border of the park, at about the center of the park in north south direction. We chose this camp as our starting point for two reasons: it’s cheap accommodations and it’s convenient location to the park border and Blyde River Canyon, which we explored prior to arriving in the park. 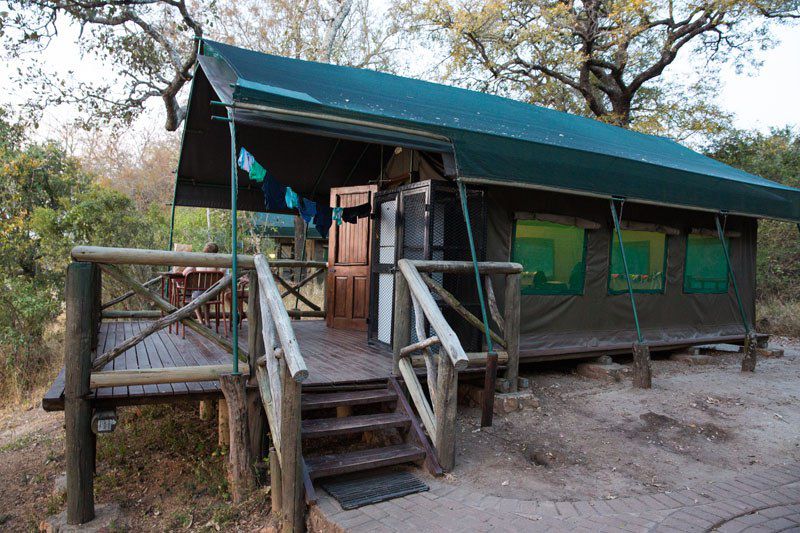 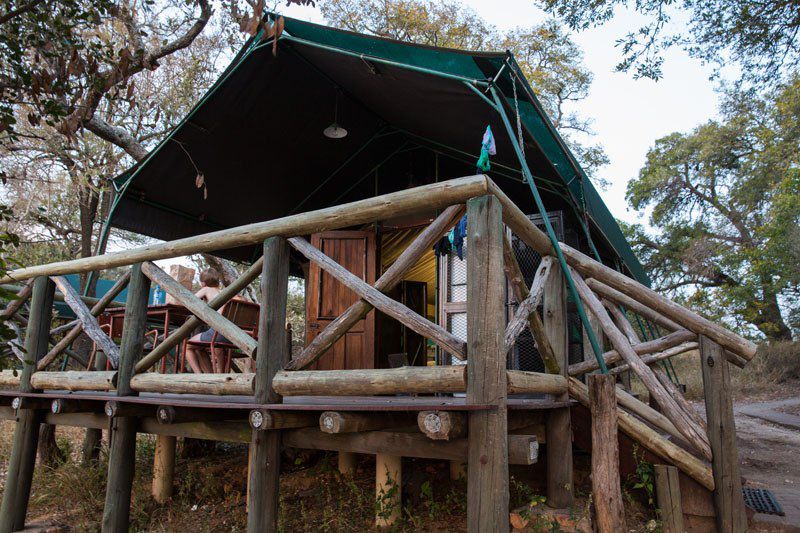 Our deck, which overlooked the Timbavati River

For two nights we slept in canvas tents on raised platforms overlooking the Timbavati River. Since it was the dry season, the river was completely dry, but it would be a hotbed of activity during nighttime hours.

Our day would start with a self-drive through the nearby area at 6 am. We would then take a break in the hotter, mid-part of the day, and then go out later for an afternoon drive. During our drives we would see a lot of the same animals: baboons, giraffe, elephant, wildebeest, and more, but they were always very cool to see. 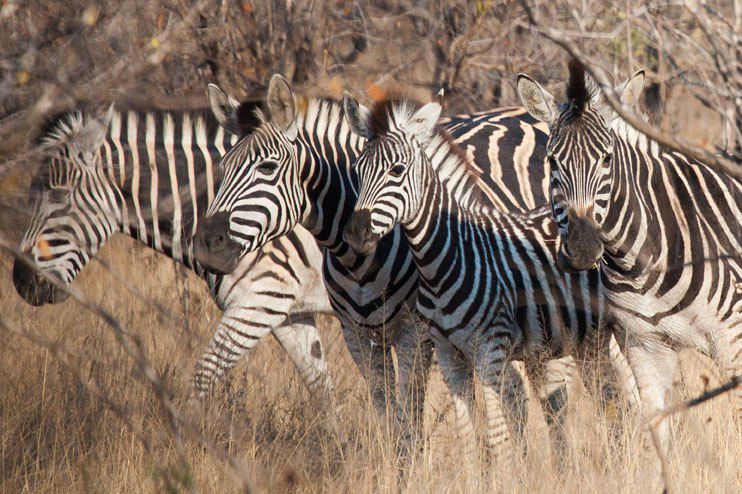 The highlight of staying at Tamboti was the nocturnal sounds. Our tents overlooked the dry river bed of the Timbavati River, with just a chain link fence separating us from hyenas, lions, elephants, and leopards. Tamboti does have monkeys and honey badgers that roam the campsites, so the tents, and especially food, need to be locked up at all times. Monkeys are able to open refrigerators, turn doorknobs, and find their way into unlocked tents and even cars. 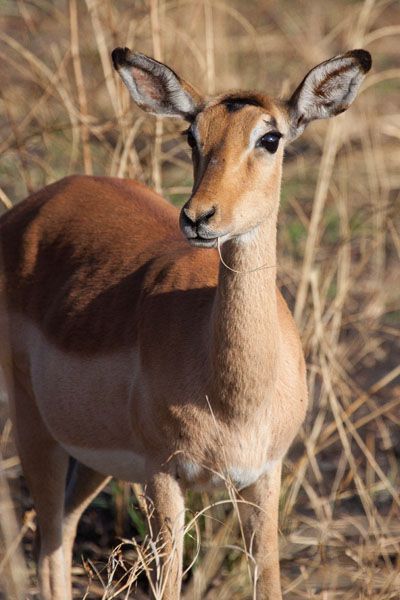 Both nights we heard an animal kill. Out of the silence there comes this sudden chaos of roaring, squealing, lots and lots of rustling and thrashing in the brush, and then grunting as the captured animals dies. The second night it sounded like an elephant may have even got into the mix, as we heard the trumpeting of an elephant that may have been a little too close to the melee. 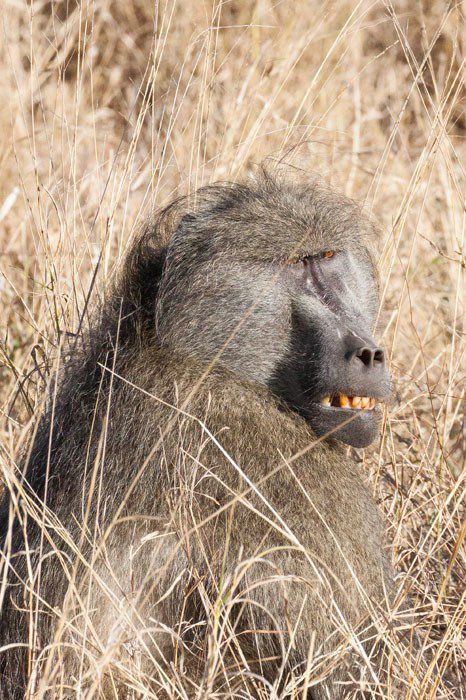 On our second night, it sounded like the animal occurred just outside of the Tamboti camp. It was 6:30 pm and already it was dark outside. We could hear everything perfectly, we just couldn’t see it because of the darkness. If I had to make a guess, I would say some lions caught and killed a warthog.  Hearing it was amazing. It is such a violent, dramatic, alarming thing to hear one animal catch and kill another.

The canvas tents offer no soundproofing, so during the night we slept with the sounds of the African wilderness in the background. Literally all night long, almost every fifteen minutes, we heard lions roaring not far from our tent. Early in the night monkeys would raid our trashcan outside. We would also hear elephants, many different kinds of birds, and a multitude of unidentifiable animal sounds.

These were wild, unforgettable nights. To hear a lion roaring in the not so far off distance during the night was my favorite part of staying at Tamboti Camp. 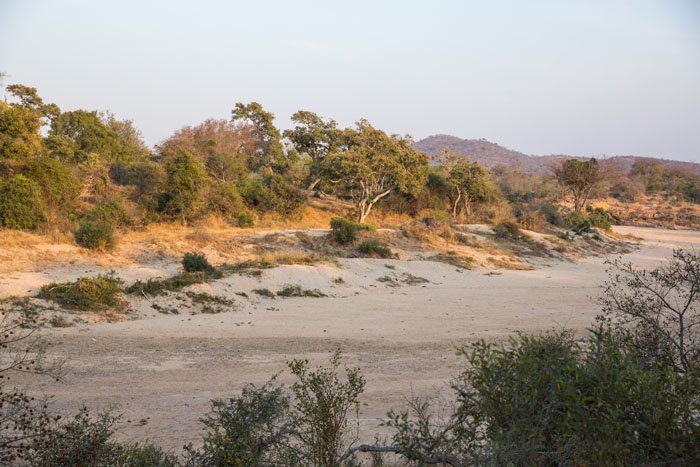 Dry riverbed of the Timbavati River

After our two night stay at Tamboti we traveled into the park, spending two nights at Satara Rest Camp and ending at Crocodile Bridge.

PLACES TO GO IN SOUTH AFRICA: Spend a few days in Cape Town, go on safari in Kruger National Park, journey to the Cape of Good Hope, go road tripping on the Garden Route, visit iSimangaliso Wetland Park, and explore the Drakensburg Mountains of South Africa.

PLACES TO GO NEAR SOUTH AFRICA: Chobe National Park in Botswana is one of the best places in Africa to see African elephants. Go on a road trip to Lesotho on the Sani Pass. And visit Mlilwane Wildlife Sanctuary in Eswatini. 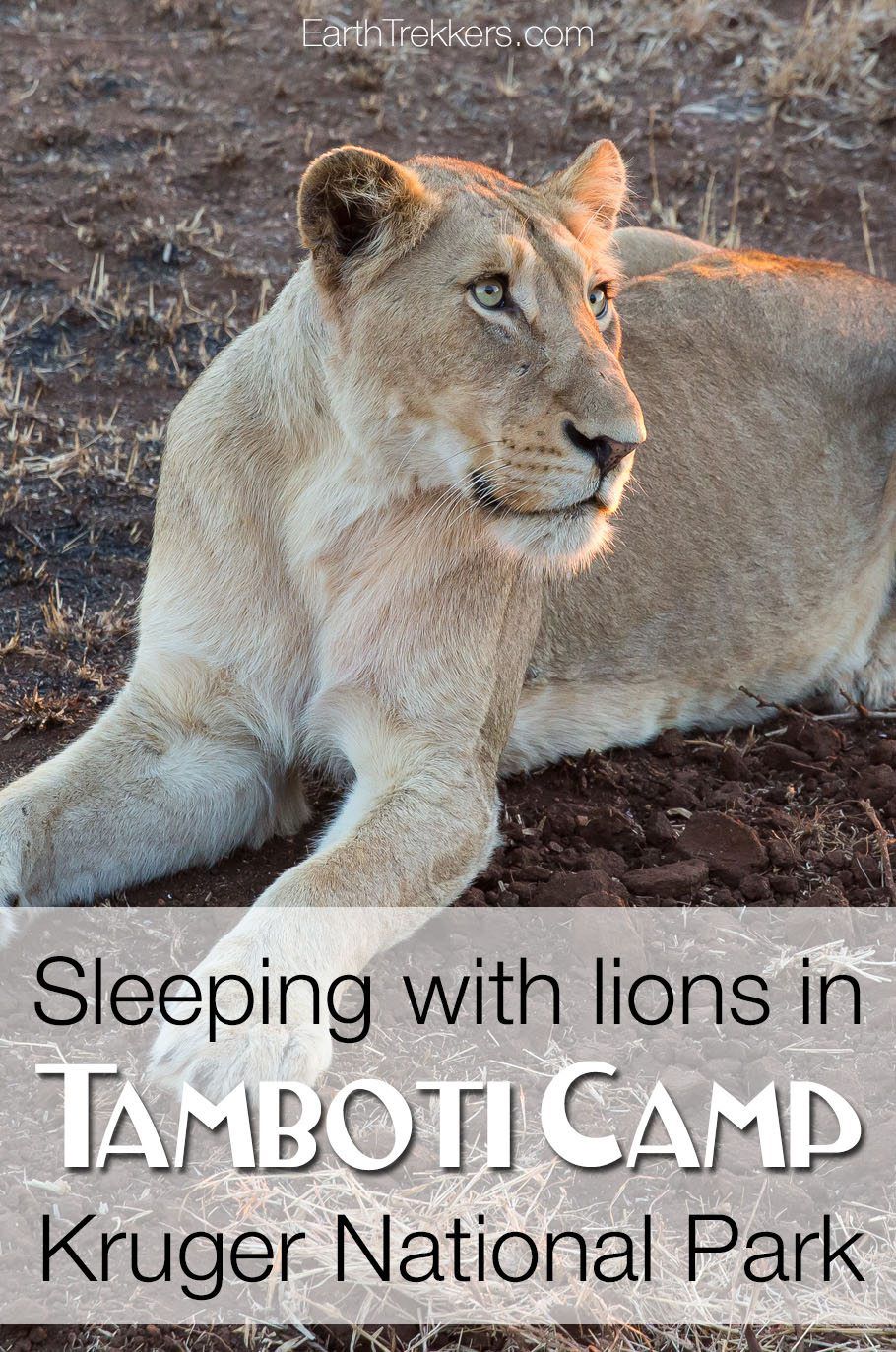