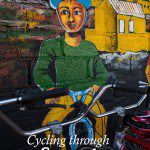 The city of Johannesburg was our arrival point in South Africa. We had one day to spend here before traveling on to other places. Now we were a party of six, as Kathy and Valerie, our Moms, arrived in Johannesburg on the same day as us. They will be traveling with us for over two weeks as we tour Botswana, Zimbabwe, Zambia, Swaziland, and parts of South Africa.

South Africa is famous for its wildlife, mining, its struggle with apartheid, and of course, Nelson Mandela. While in Johannesburg we wanted to experience some of South Africa’s rich culture and learn about its history, and what better way than cycling through the township of Soweto.

Many people are familiar with apartheid, the oppression of the native African people by white settlers. Apartheid continued until 1994, when it was abolished through the work of Nelson Mandela and the African National Congress. Now that apartheid has ended, living and working conditions have improved for many people but there is still a long way to go.

Many people still live in one room houses without running water, heat, or electricity. Others live in nicer houses but these still fall below the poverty line. Many of these living conditions are found in the townships of Johannesburg, the most famous being the township of Soweto (an abbreviation for the South Western Township).

Soweto has been the site of public uprisings, it has been home to both Nelson Mandela and Desmond Tutu, and its stadium was used for the opening celebrations to the FIFA World Cup in 2010. This is one of the most famous and most fascinating neighborhoods in the world, and we were going to spend four hours cycling through it today. 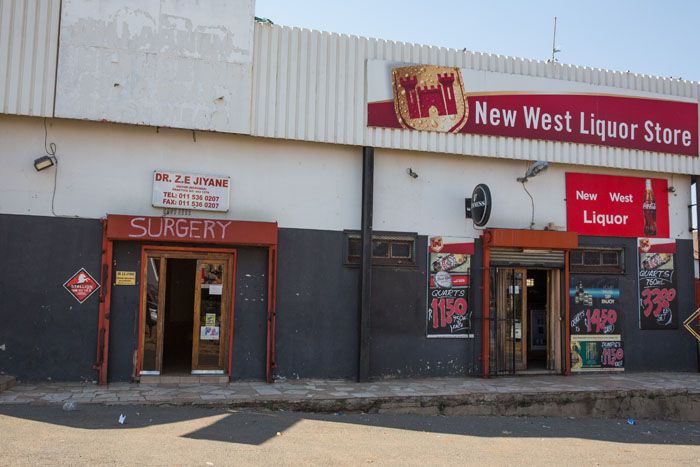 The first step, finding the location of the company hosting the tour, Lebo’s Backpackers, was quite difficult. We drove from our hotel into Soweto, driving down narrow roads lined with small fenced in houses. It was a poor neighborhood, trash was blowing everywhere (it was a very windy day), and many people were out walking the streets. We saw one room surgery centers sharing building space with a funeral home and a liquor store, quite a strange combination, as well as car repair centers, hair salons, and people selling street food.

Since we were in very unfamiliar territory we felt a little apprehensive. After a few wrong turns and phone calls to Lebo’s Backpackers, we finally found our destination. 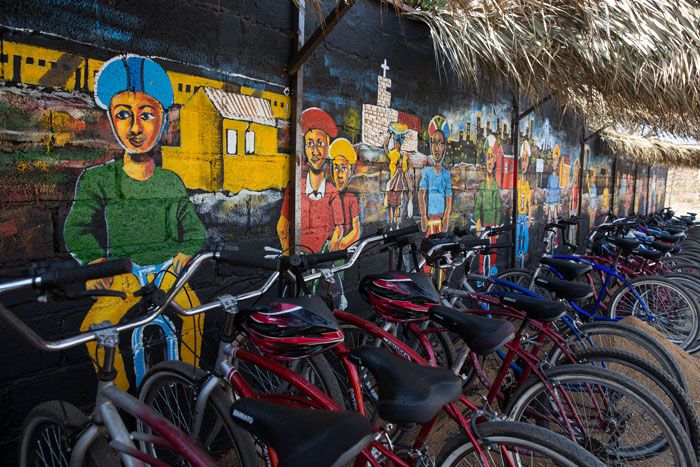 Lebo’s Backpackers is a hostel that also runs the cycling tour through Soweto. We were greeted by our tour guide for the day, Jazz, a very friendly and funny Soweto native, were fitted with bikes, and at 10:30 am started the tour. 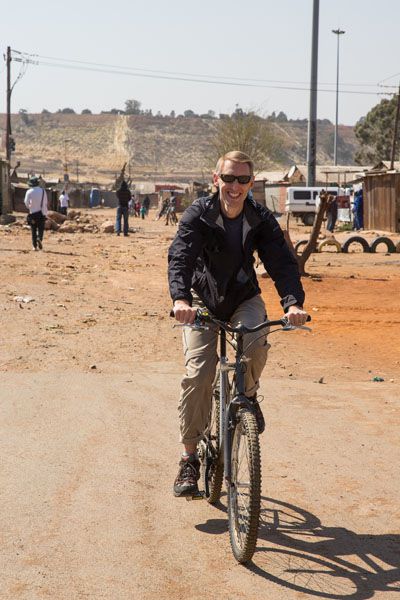 Our group was a total of about twenty people, most of us tourists from the US and Europe. Our reception as we cycled through Soweto was very positive.

Jazz taught us how to say “hello,” which is a version of Spanish, “holahola,” spoken very fast with a slightly different accent. We passed many, many people during the four hours, and every single one of them greeted us with a smile and loved it when we said “holahola” to them. 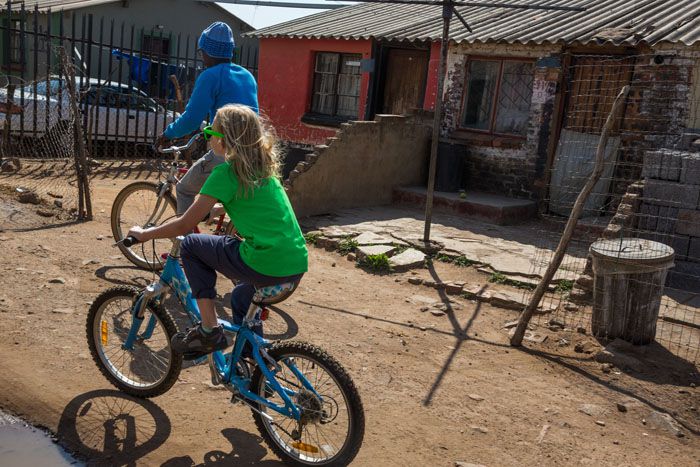 The poorest area we cycled through was the hostel. This was once a “men only” neighborhood but is now coed. The houses are constructed out of corrugated tin, wood, and bricks. Many people share outhouses and communal washing areas, we saw people doing their wash at the outdoor faucets, and unfortunately, there was trash everywhere. 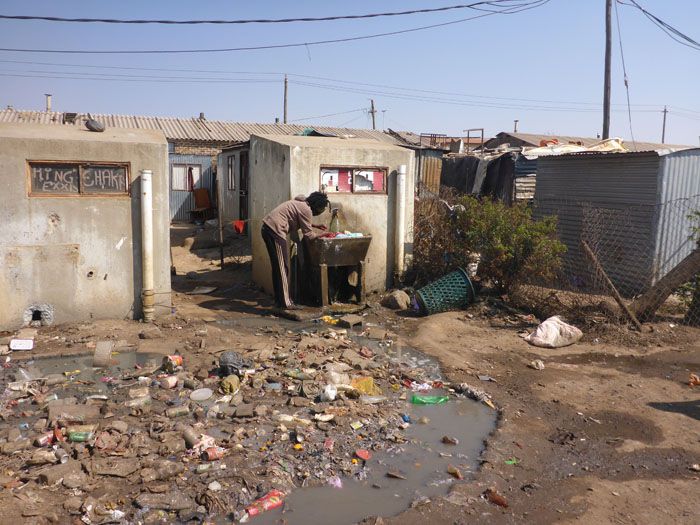 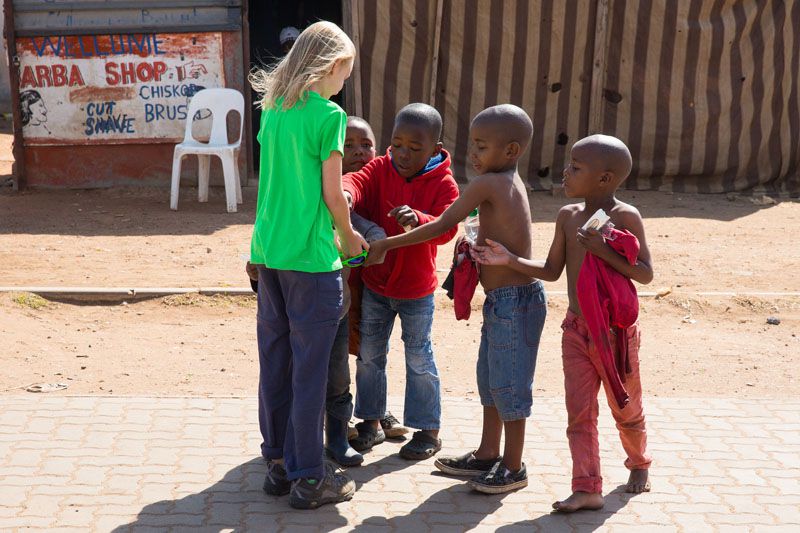 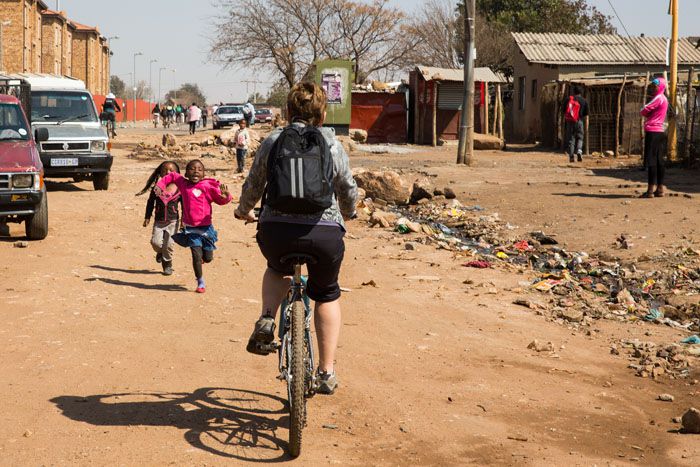 One of the stops during the tour was to a local business, one of the small restaurants in Soweto. Twenty of us packed ourselves into a very small, very cozy shack made of corrugated tin, for a traditional Soweto meal of cow cheeks and home brewed beer. This was a meal eaten by many people living in this area during apartheid. I guess cow cheeks, a part of the cow I would have never thought to eat, was a cheap way to get some meat into their diet. After trying it, I couldn’t imagine it becoming part of my daily diet.

We were served the cow cheeks on a cutting board, and it looked like something from an episode of “Fear Factor.” There are small bits of beef mixed in with larger globs of fat. It is cooked unseasoned, and it was basically like eating a chunk of fat.

One piece was enough for me, but Tim had a few pieces. Tyler and Kara were good for one bite, also. We ate this with ground up, cooked maize, which we ate with our fingers, and all shared a few beers. The home brew, also brewed from maize, looked and tasted like a mixture of beer and milk. The home brew was passed amongst the twenty of us, Tyler and Kara excluded, as we all took sips from the jug. What a wild, fun experience! 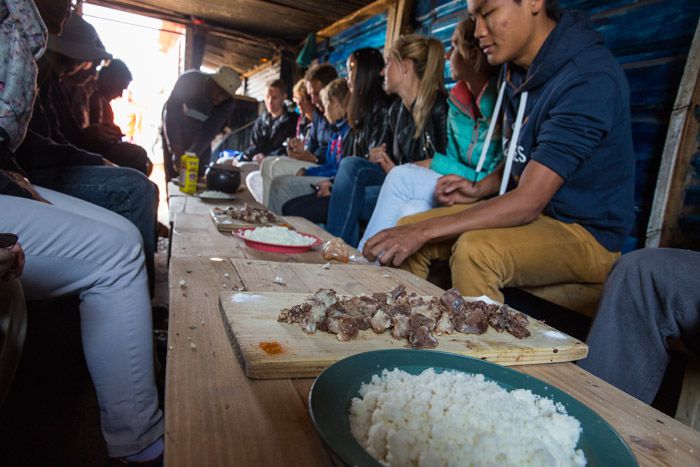 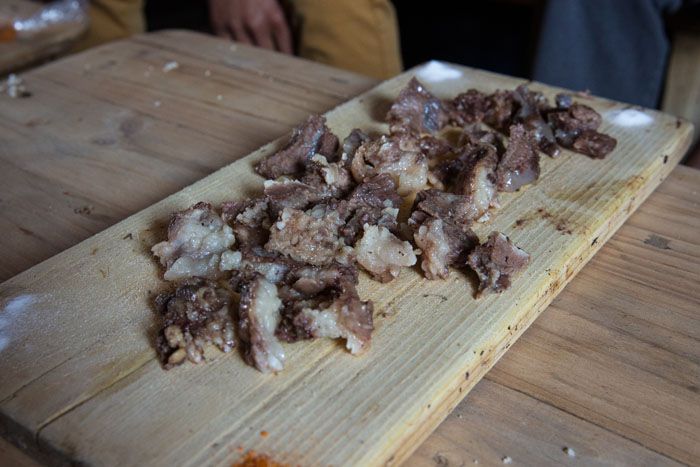 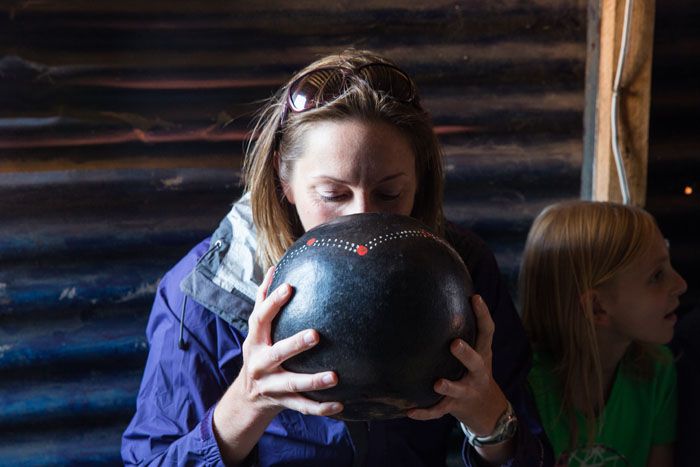 Our tour concluded at the houses of Nelson Mandela and Desmond Tutu. Their houses were within 50 meters of each other. Seeing Nelson Mandela’s house was a bit of a bust, as he only lived here for eleven days, just after being released from prison. After an assassination attempt, he was moved to a different house. You know you are famous when people flock to a house you lived in for just 11 days. 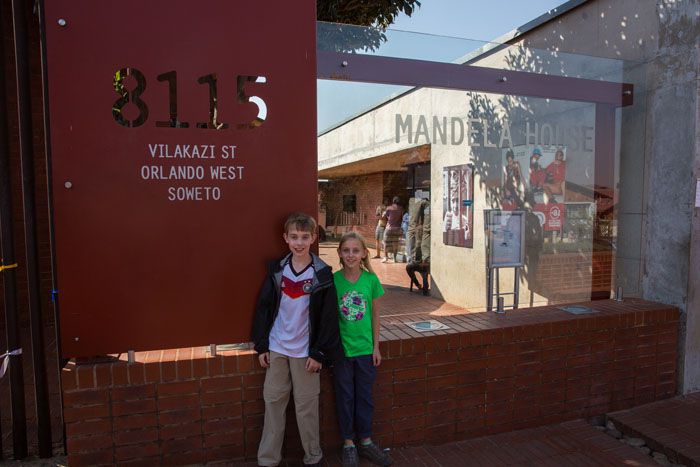 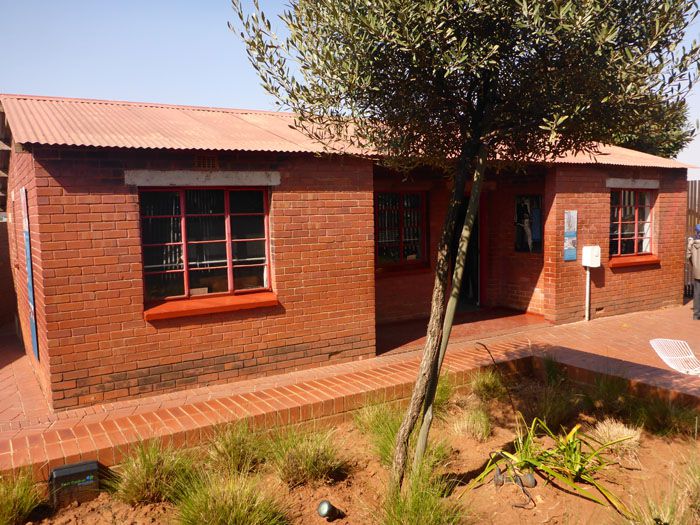 For more information on the company we used, Soweto Bicycle Tours, click here.

KRUGER NATIONAL PARK: Learn why Kruger makes a great budget safari destination. And read about our experience in Tamboti Camp.

ANIMAL ENCOUNTERS IN SOUTH AFRICA: Kruger National Park is one of the best places to go on safari is South Africa. iSimangaliso Wetland Park is lesser known but is well worth the visit to see hippos, rhinos, and amazing beaches. On the Garden Route, visit the wildlife parks or go shark cage diving.

SOUTH AFRICA: Here are 14 reasons why you should visit South Africa on your next big trip. 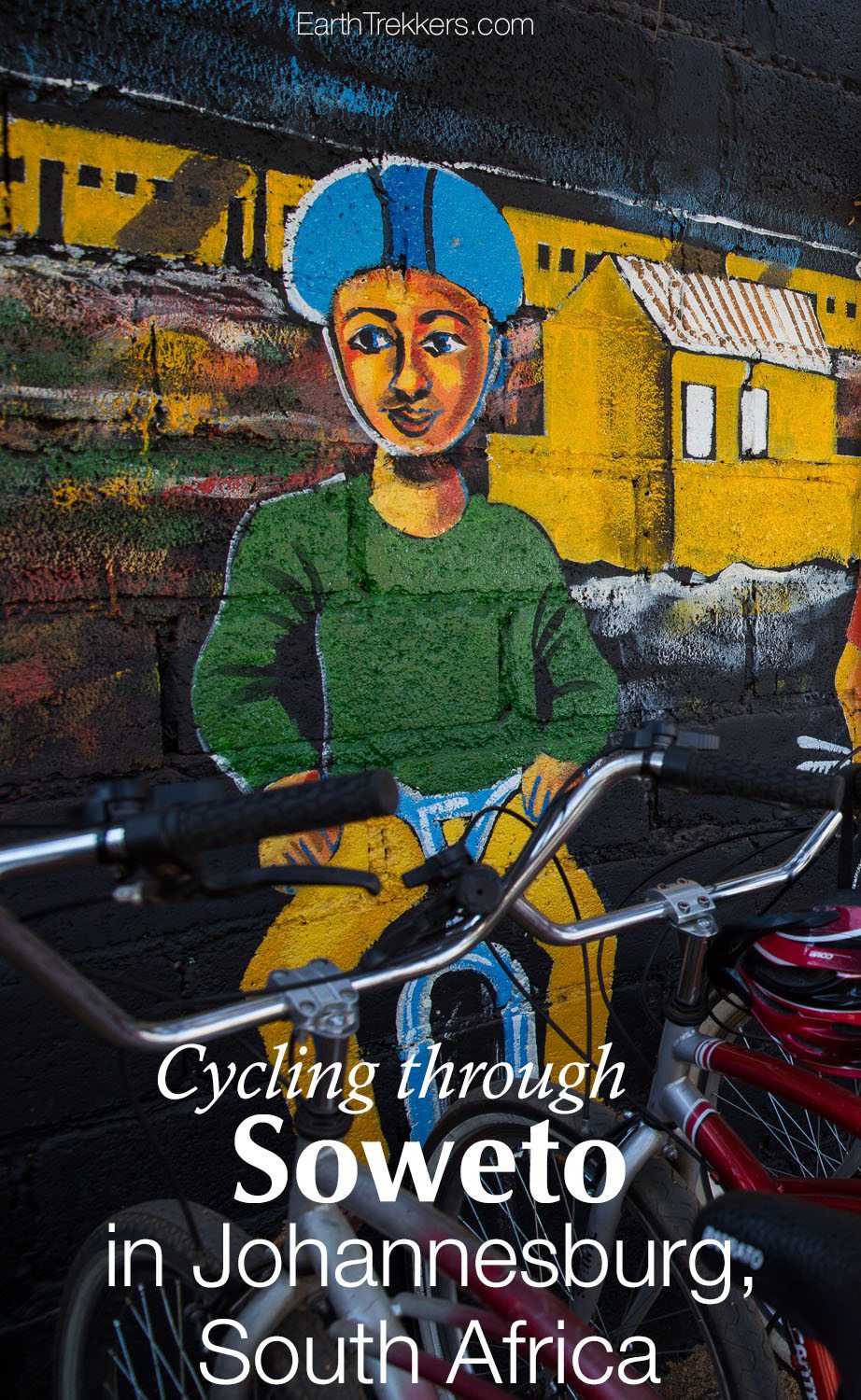