Journey to the Red Center of Australia 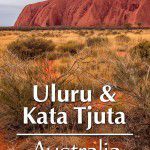 For the four of us, a visit to Australia would not be complete without a journey to the red center of Australia. We just had to see Uluru, also known as Ayers Rock, plunked down in the center of the desert.

This article was originally written in 2015 during our trip around the world. It is updated on a regular basis.

Getting to the Red Center

Visiting Uluru is not as time friendly or as budget friendly as one would think, since it is located almost dead center of Australia. Sure you can drive here, taking a minimum of two full days from any major Australian city, but most people fly, as we did.

Once here, hotels can charge a fortune, as the Ayers Rock Resort is the only deal in town. Their monopoly on hotel rooms allows them to charge guests a ton, and it was here that we would have our most expensive accommodations yet, paying $200 for a budget hotel room. Needless to say, flying in and out of Yulara (the tiny town located next to Uluru) and paying exorbitant prices for a hotel room does not make visiting Uluru a budget destination. Still, we had to do it. 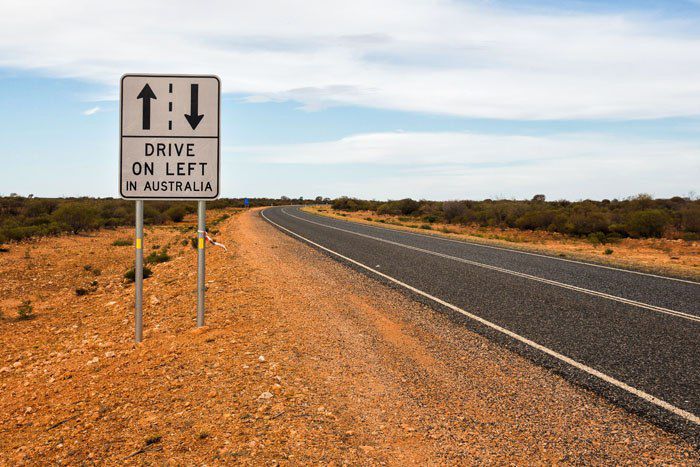 The majority of Australia is desert, aka the infamous “outback.” The majority of Australians live along the coastlines, where the land is fertile and temperatures do not skyrocket above 100 degrees Fahrenheit on a daily basis. Journey to the red center of Australia, the heart of the country, and the climate is very different.  It is hot, arid, flat, and mostly devoid of people.  Red kangaroos, dingoes, snakes, and lizards roam here, accustomed to high temperatures and low rainfall. Lucky for us, we arrived at the beginning of winter, giving us cool temperatures and clear skies. Or at least, that was how it was supposed to go. 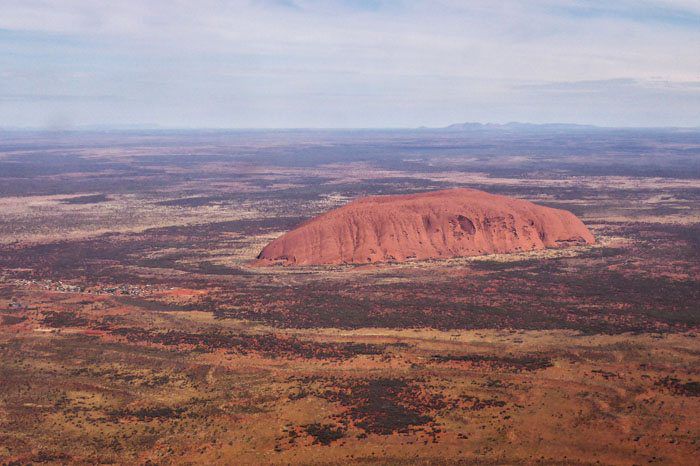 We arrived on a brilliantly sunny day, flying in from Melbourne, three hours away by airplane. Even though we felt like we were peeking at the gifts under the Christmas tree, we could not keep ourselves from looking at Uluru from the airplane. There it was, just as we imagined it, a giant red rock plunked down in the Australian outback.

We had three entire days devoted to Uluru and nearby Kings Canyon. Kings Canyon, three hours away from Uluru by car, was first on our list, so we jumped into our rental car, driving away from the main attraction in the outback. From the roadside, I took one photo of Uluru and little did we know that this would be the only time we would see the giant red rock in the bright sunlight. 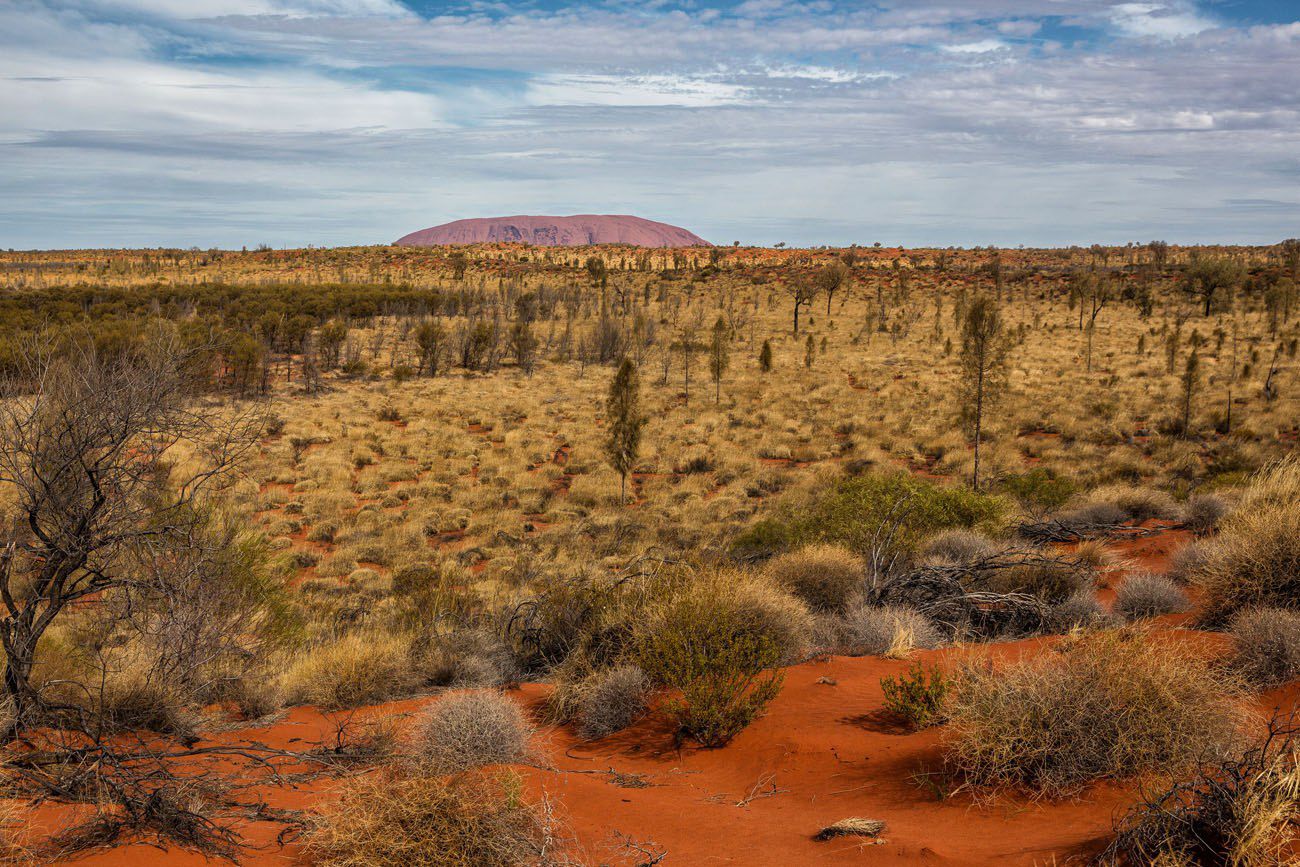 Our day hiking around Kings Canyon was fabulous and entirely worth the six hour round trip journey from Yulara. In fact, King’s Canyon was an unexpectedly awesome experience and we highly recommend adding this into your itinerary if you have the time. Read more about our experience in King’s Canyon.

Twenty-four hours after driving away from sunlit Uluru, we arrived back in Yulara, and checked into our very expensive budget accommodations at Ayers Rock Resort.

We drove the short distance to Uluru to watch the “sunset.” The sky was completely covered in a blanket of clouds, obscuring any chance of us seeing those amazing desert sunsets I have heard so much about, as well as hiding a sky full of stars we were so interested in viewing. 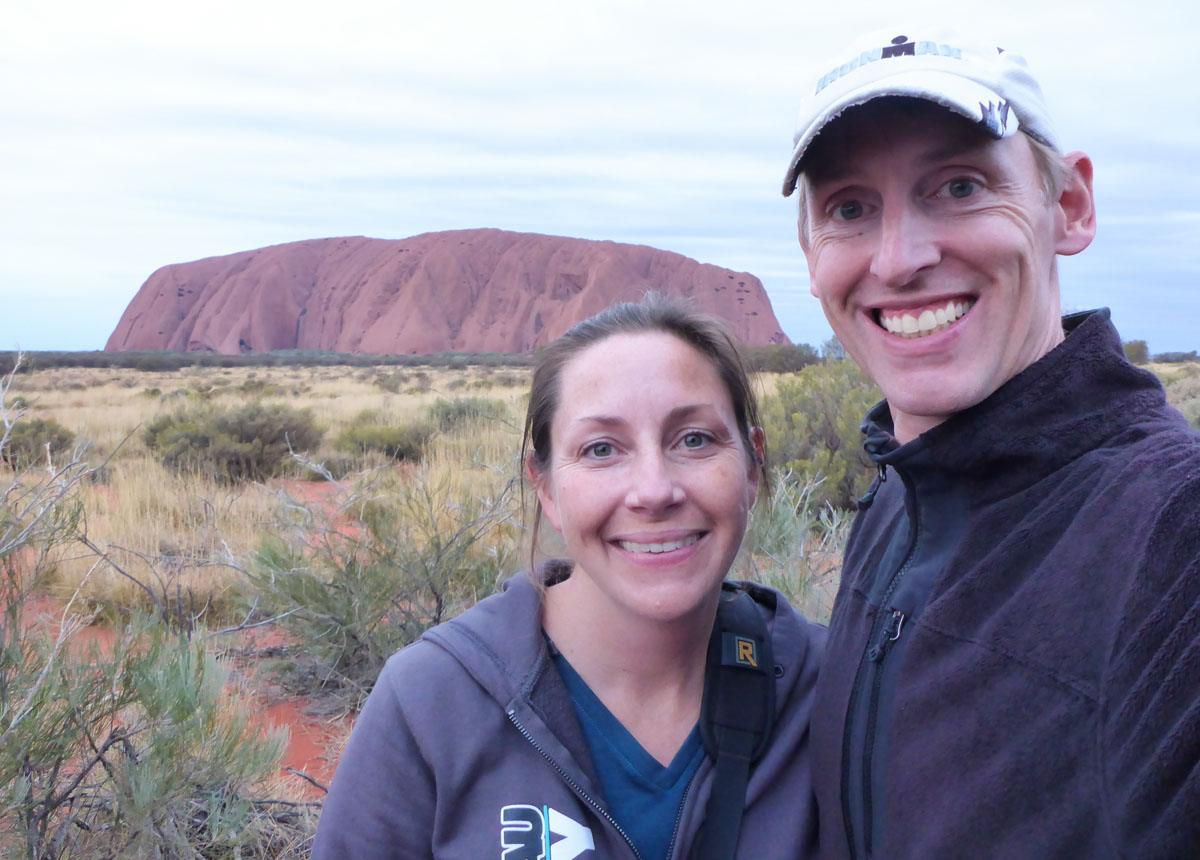 Even with the clouds, Uluru is beautiful. Everyone has an idea what Uluru looks like, this iconic Australian landmark.

Many people who look upon it describe feeling something almost magical, a primeval connection to our ancestors, a sense of spirituality. Did we experience that? No, not really. I may have felt more at peace in the presence of Uluru, but Tim noted no special feelings of enlightenment. Tyler and Kara, being kids, just made faces as they posed for pictures, this being really nothing more to them than the giant red rock that it is.

I was a little disappointed that I did not feel more when looking upon Uluru. I was hoping to feel that connection with this rock that I have read so much about, but for my family and I, it just did not happen. Bummer.

Even so, there is something amazing about Uluru. Here is a very large, red rock, sitting in the desert, nothing else around it for kilometers. This did leave us wondering…”why is it here?”

Here is a science lesson on how Uluru came to be.

550 million years ago, this area of Australia was covered with mountains. Rainwater washed sediment down the mountains where they formed large fan shaped rocks. Just a mere 50 million years later, central Australia became covered by an inland sea. The pressure of the water on the rock sediment turned it into conglomerate rock. After the sea receded and after millions of years of erosion, the mountain ranges have been flattened, leaving behind the very hard sandstone rock that is Uluru.

The following morning, we woke up before the crack of dawn, to be able to view the sunrise over Uluru. The weather forecast predicted even more cloud cover for today with rain for tomorrow. Rain!! It rains in the outback?! When we are here?! Oh, yes it does!

Our day started off great. We did get to view the sunrise, at least for a few minutes, until the sun disappeared once again in the clouds that would just not go away. What was so frustrating is that we could see clear sky off on the horizon, teasing us, but the clouds were determined to stay put right over Uluru, much to our dismay. 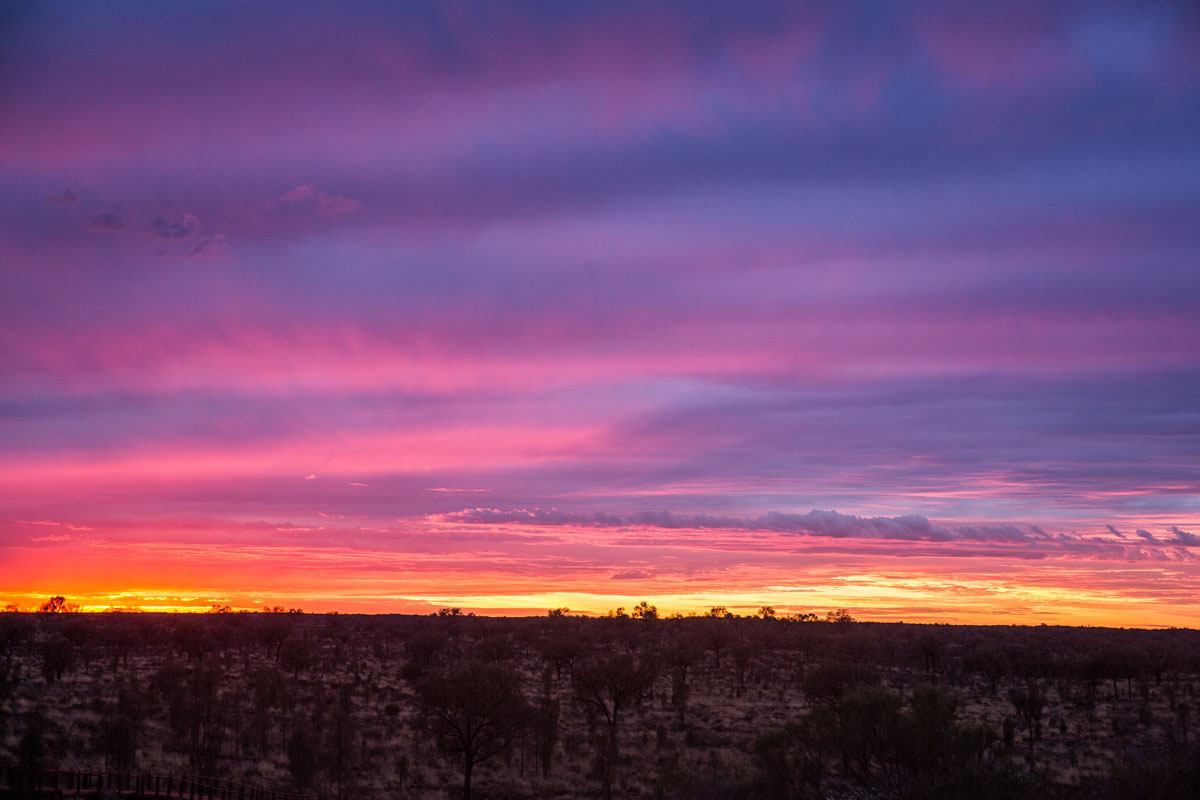 One of the popular things to do is to walk around the perimeter of Uluru, an almost 11 km walk. It is an easy walk, entirely flat, and it allows those willing to go the distance a unique perspective of Uluru, viewing all of its nooks and crannies, undulations, caves, and watering holes.

During our three hour journey, it started raining. Drizzly rain, but rain all the same. When speaking to the locals here, they were amazed at the rain. They assured us that it NEVER rains this time of year. For them, it was a treat, the rare chance to see the rain. Maybe we should count ourselves lucky, as this is a rare event to be enjoyed, but I so wanted to see Uluru in the bright sunlight, even if just for a few minutes. 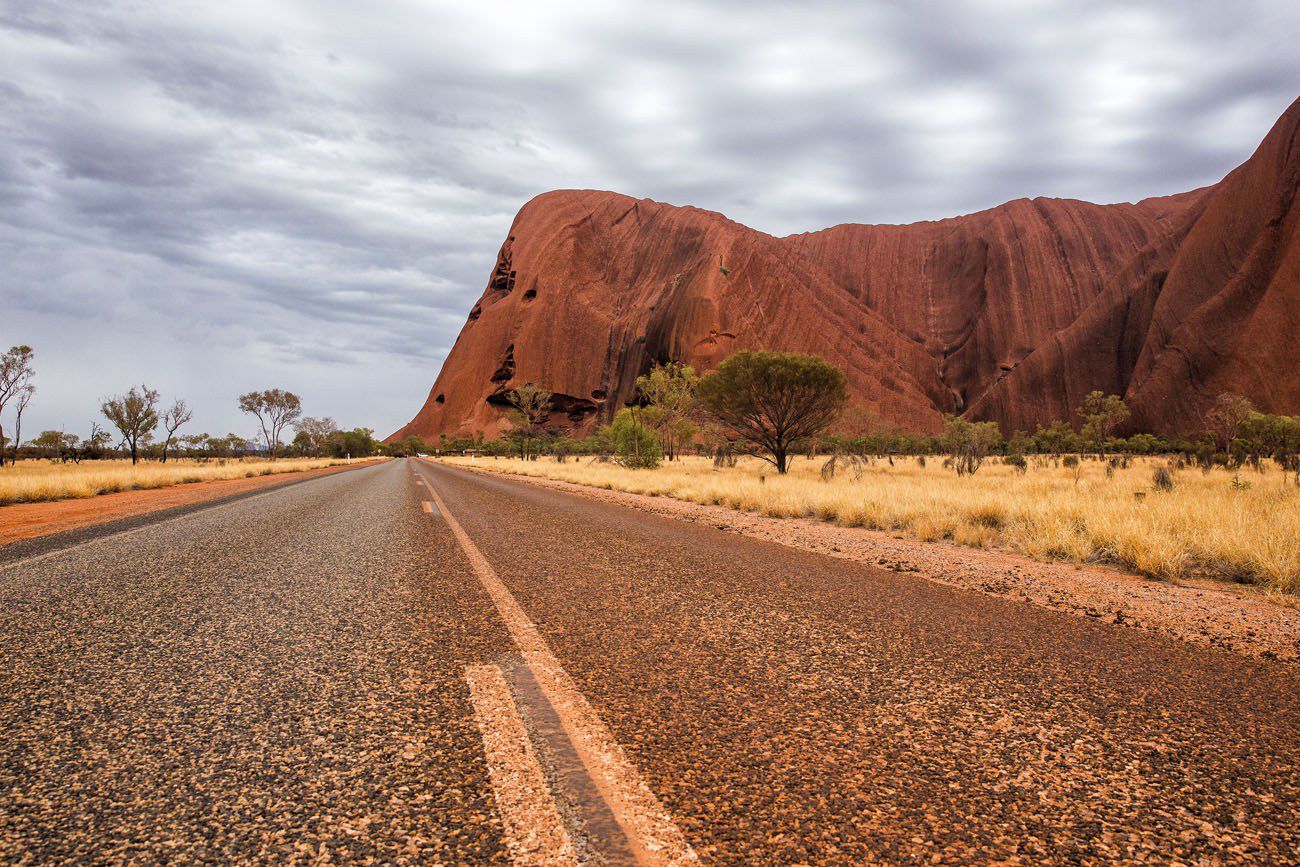 Our walk around Uluru took about three hours. Tyler and Kara thought it was a bit boring, as there were no mountains to climb, very few rocks to scramble over, just a flat, sandy loop around a big, red rock. Tim and I enjoyed it more, appreciating how much Uluru changes as you walk around it.

Uluru is not just a large, smooth, red rock in the desert. It was always changing as we walked around it and we got to explore small caves where the aborigines lived, looked at watering holes (now completely dried up but that was about to change), and admired the huge pockmarks on the rock, like a giant took his thumb and made divots in the rock. 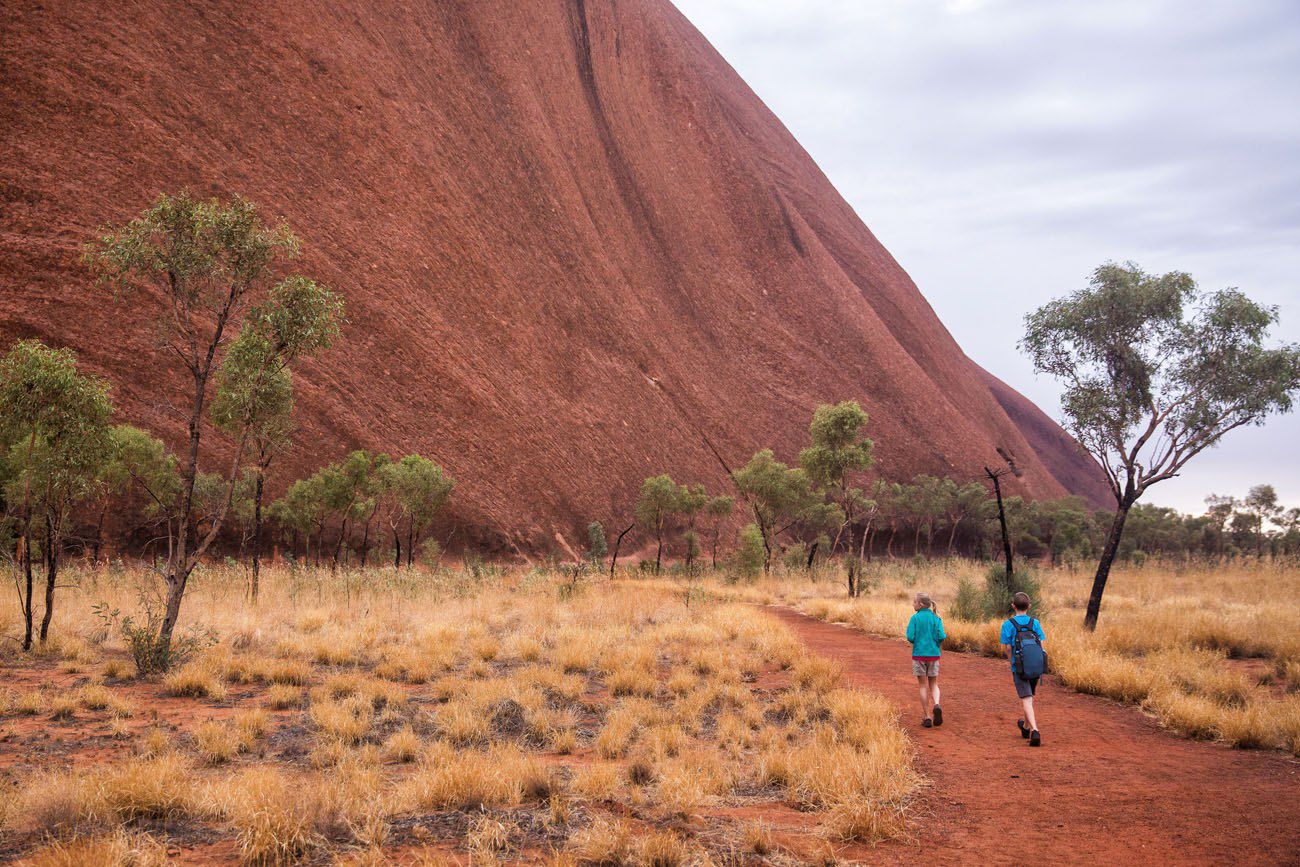 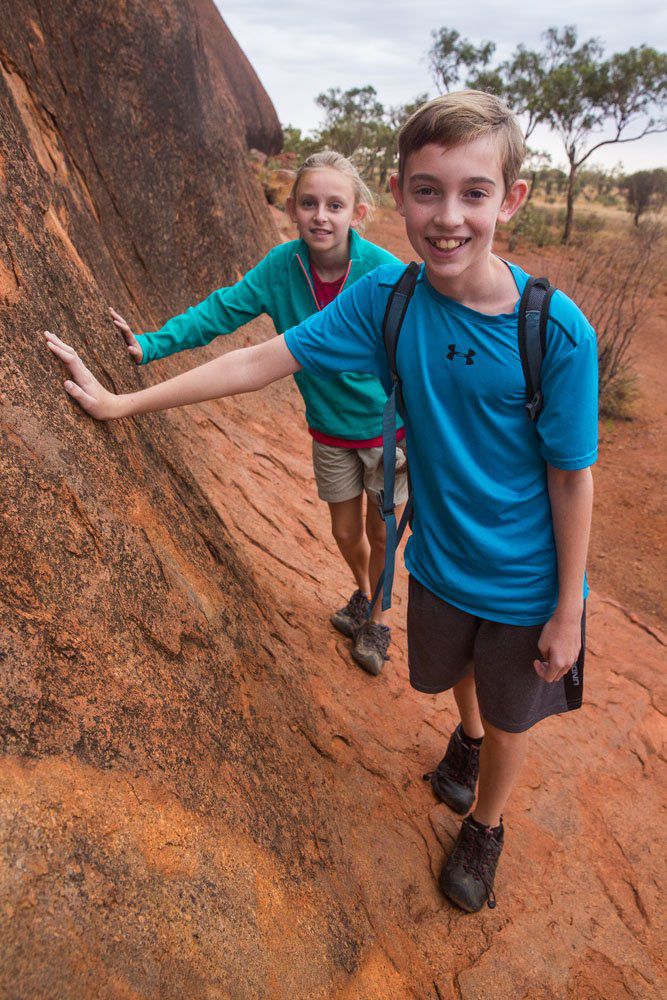 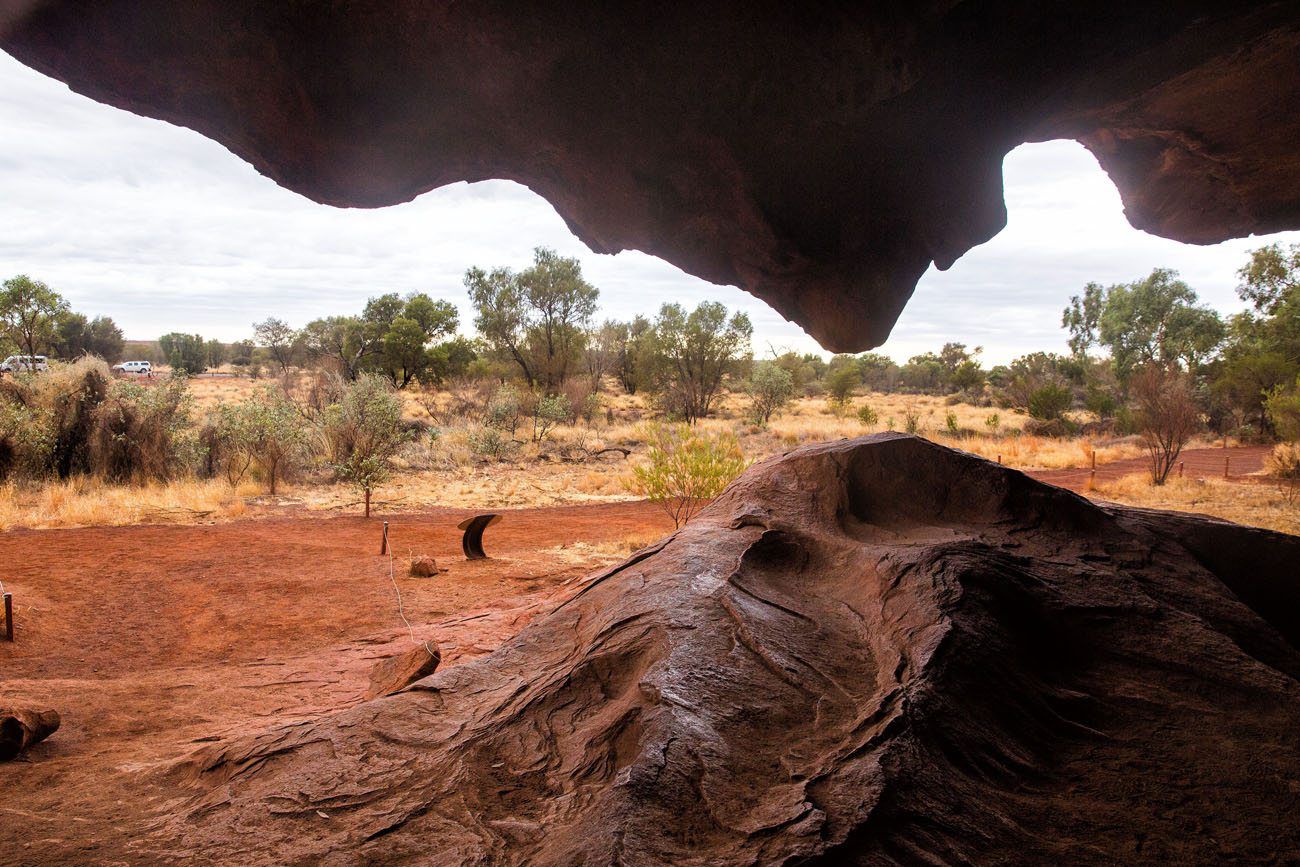 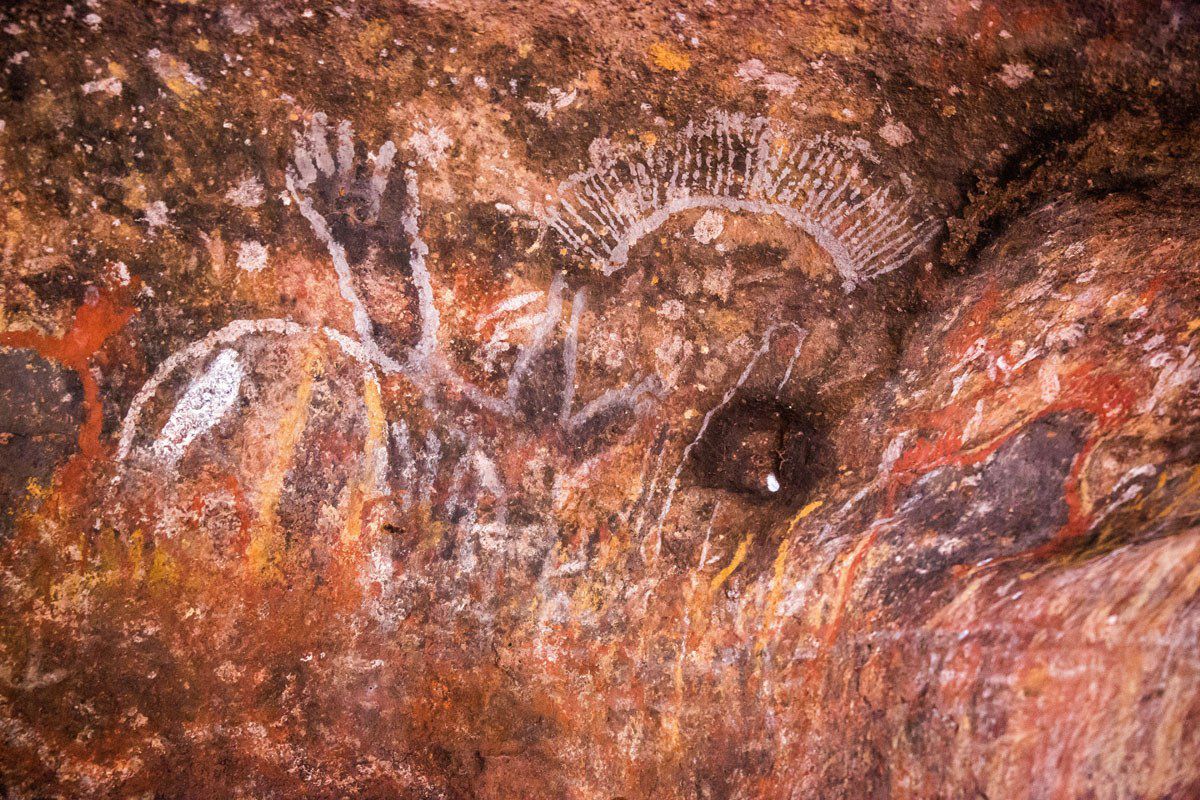 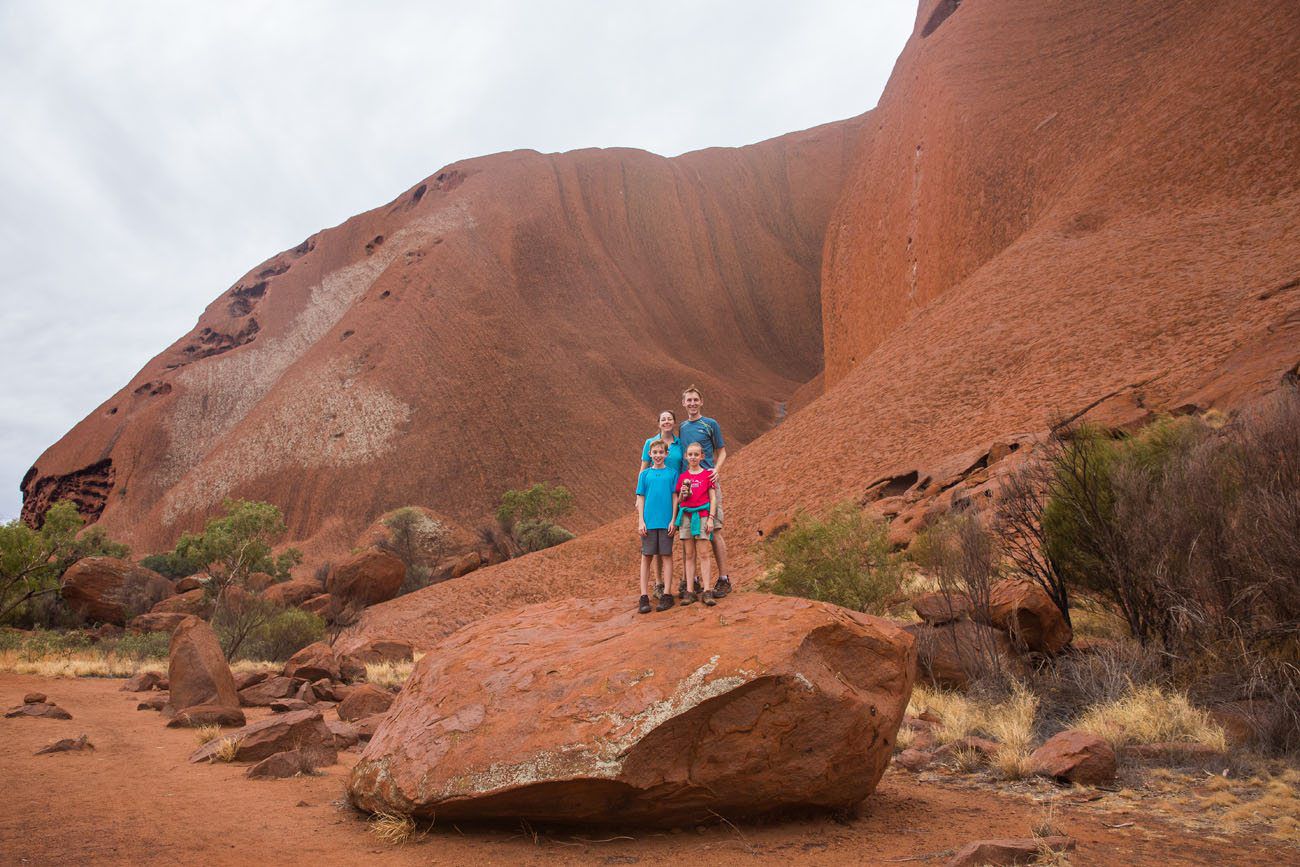 Fifty-four kilometers away is Kata Tjuta, aka The Olgas, another red, rocky formation resembling Uluru, only with a lot more character. Uluru is by far the more popular of the two, but Kata Tjuta is more fun to hike through. 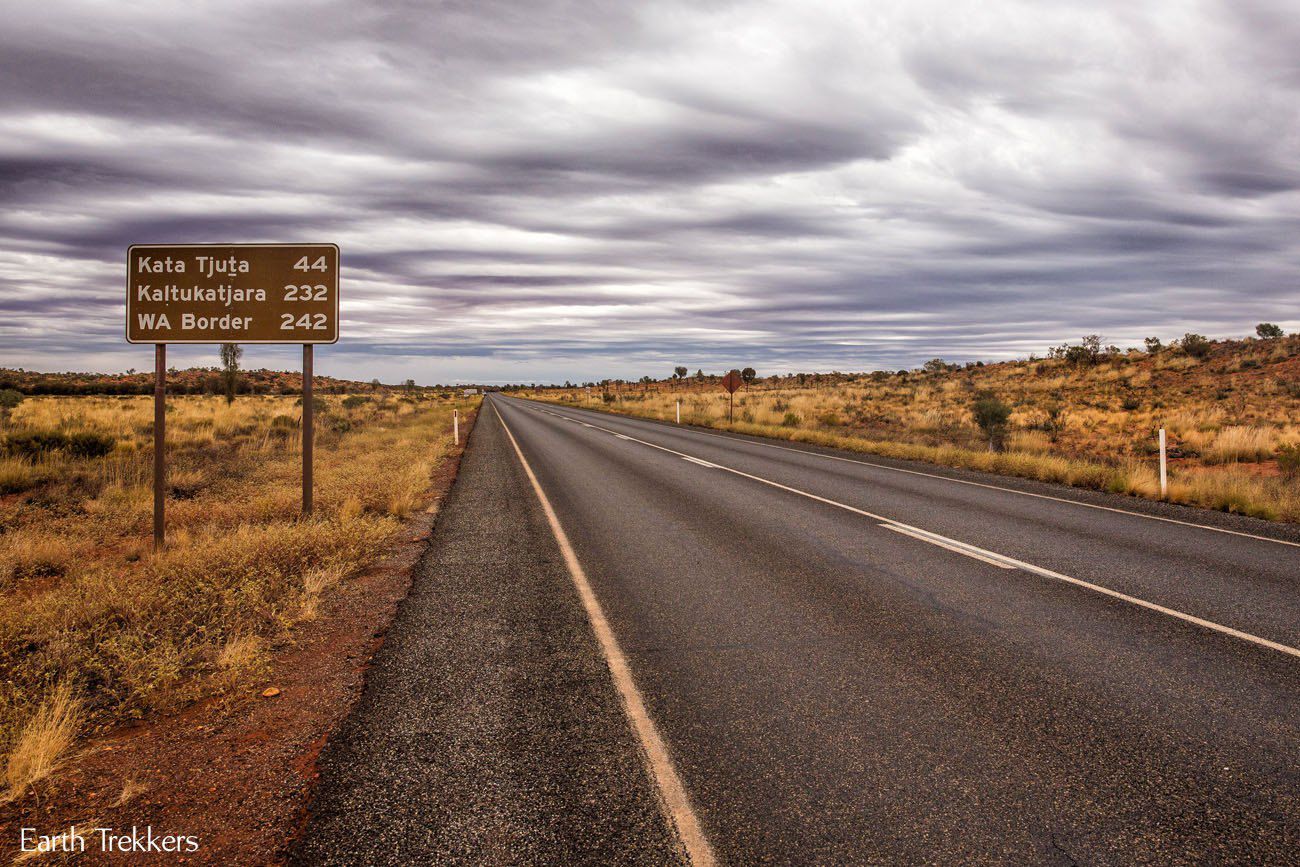 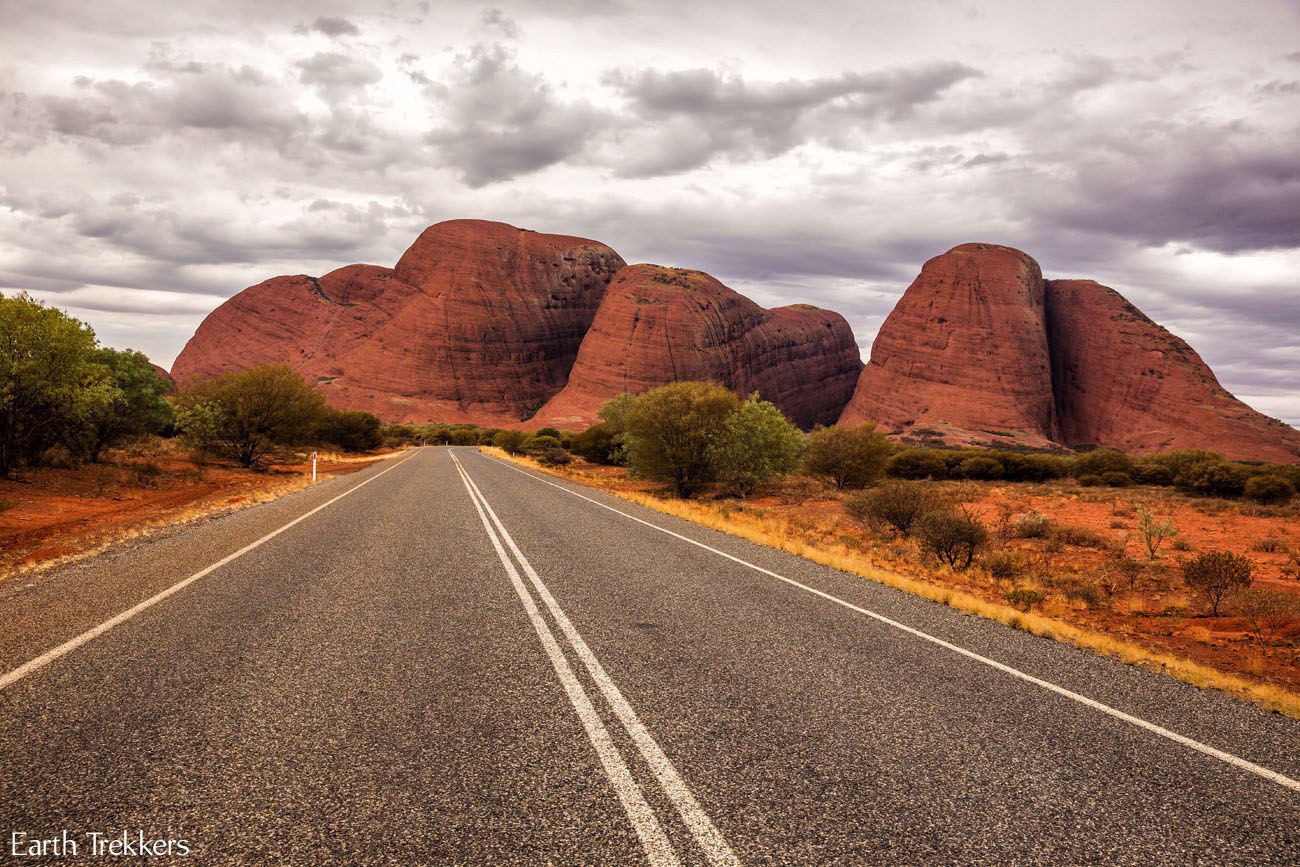 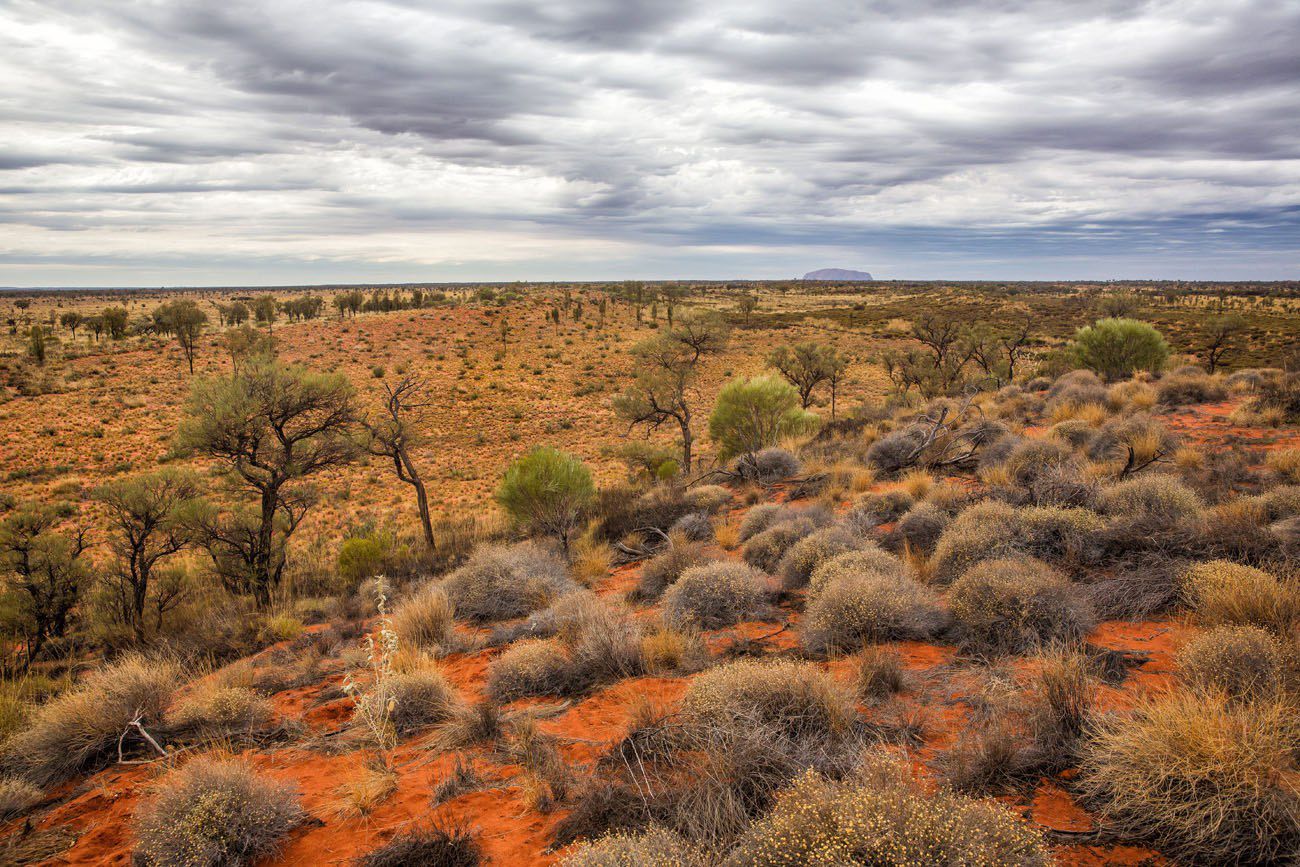 Having already walked 10.6 km around Uluru, none of us where jumping at the chance for another 10 km walk around Kata Tjuta. We figured we would hike a portion of the way through the Valley of the Winds. We loved it.

The National Parks service labeled the Valley of the Winds as a difficult hike, but in our opinion, it was much easier than that. There is one short climb up a smooth rock face, but with proper footwear, we were up and over it in no time, and before we knew it, we were standing in the appropriately named Valley of the Winds.

As the winds howled through the canyon, we looked out into the distance at more red, rocky landforms, and were even lucky enough to see the sun for five minutes. Then it disappeared behind the clouds, never to be seen again. 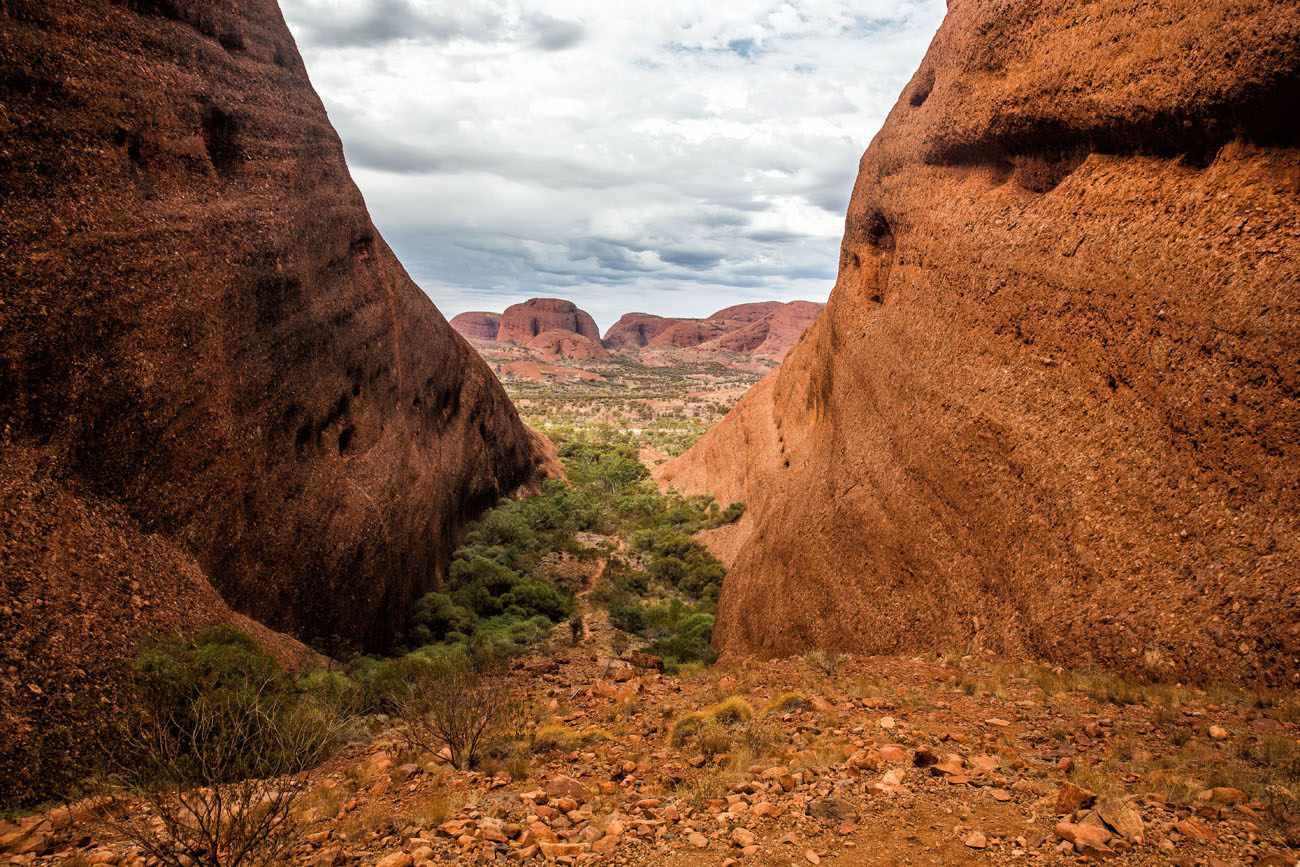 On the way back to Ayers Rock Resort, we took one last look at Uluru, spotted some wild camels strolling through the outback, and then went back to our hotel. 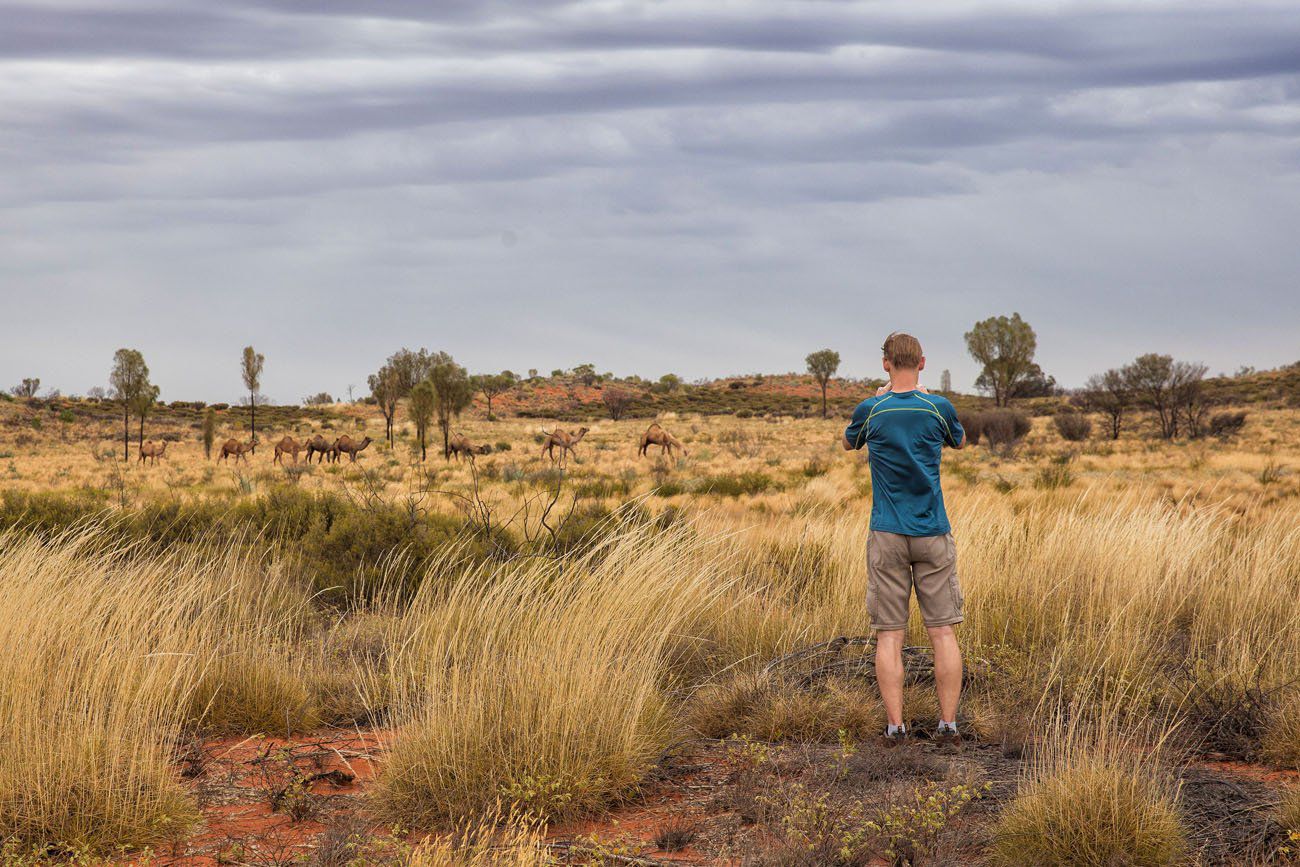 The following morning we awoke to torrential rains. It was raining in the outback and we could not believe our luck (or “unluck”). It did not matter much, as we had a midday flight out of the rainy outback to Sydney, Australia. But before we left the outback, there was still one more thing to do.

The Ayers Rock Resort offers free boomerang throwing lessons between the extremely narrow time window of 11:00 to 11:30, which just so happened to be perfect timing before our flight.

In the drizzling rain (our boomerang instructor once again informed us that it NEVER rains here this time of year) we learned how to throw a boomerang. To keep things simple, I am pitiful when it comes to throwing the darn thing, whereas Tyler picked it up right away. He would throw his boomerang and it would come right back to him.  Magic! Kara, poor girl, was just as bad as I was, although with a little practice, she began to pick it up. Tim did well but Tyler was the winner today.

Still, it was fun, and I just never, ever thought we would be getting lessons throwing a boomerang in the outback in the rain. 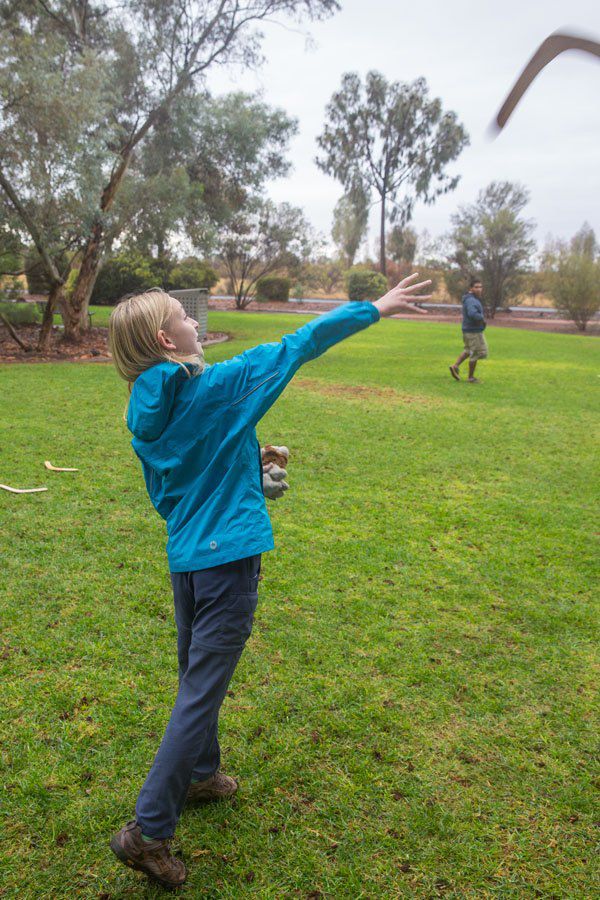 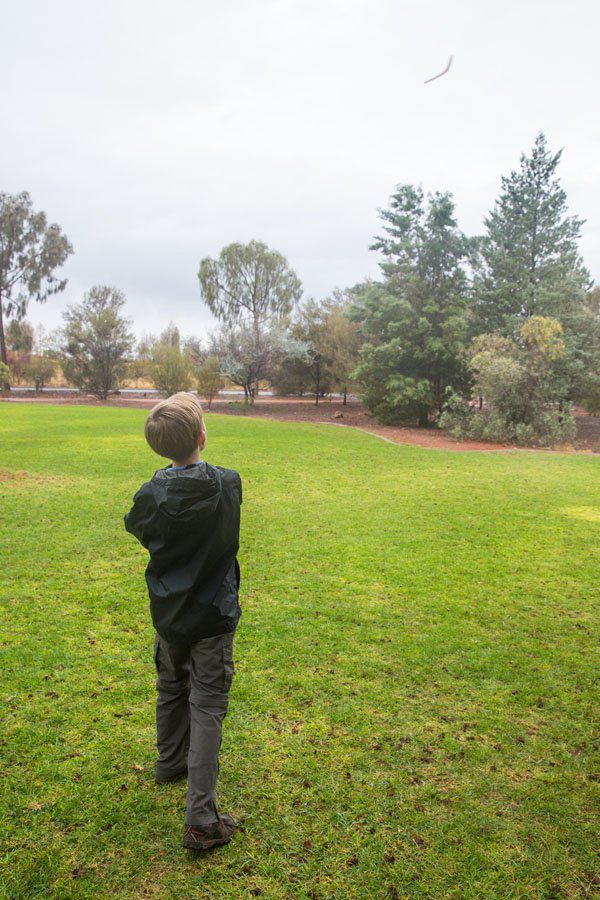 By 1 pm we were at the airport. While going through security, once again the local people let us know how it NEVER rains here this time of year, and did we see Uluru in the rain? Yes, yes we did.

I know that we should be extremely thankful for the chance to see Uluru, and yes, I am even thankful that we got to see it in the rain.

About our visit:  We visited Australia in May 2015.

ULURU: In our Guide to Uluru and Kata-Tjuta, learn how to get here, what to do, and how to plan your time. We also have information on a great hike in Kings Canyon.

PLACES TO GO IN AUSTRALIA: Spend some time in Sydney, go wine tasting in Barossa Valley and McLaren Vale, explore Uluru and the Red Centre of Australia, visit Melbourne, go snorkeling in the Great Barrier Reef, and don’t miss Tasmania, one of our favorite places in Australia.

AUSTRALIAN ZOOS: In our article A Tale of Two Zoos, we compare two of our favorite zoos in Australia, Snakes Down Under Reptile Park and the Australia Zoo.

GREAT OCEAN ROAD: Driving the Great Ocean Road is one of the most scenic drives in the world.

TRAVEL INSPIRATION: For more travel ideas, here are 10 unique destinations to put on your travel wish list and 10 cool destinations to visit during the winter holiday season.

Planning a trip to Australia? Read all of our articles in our Australia Travel Guide. 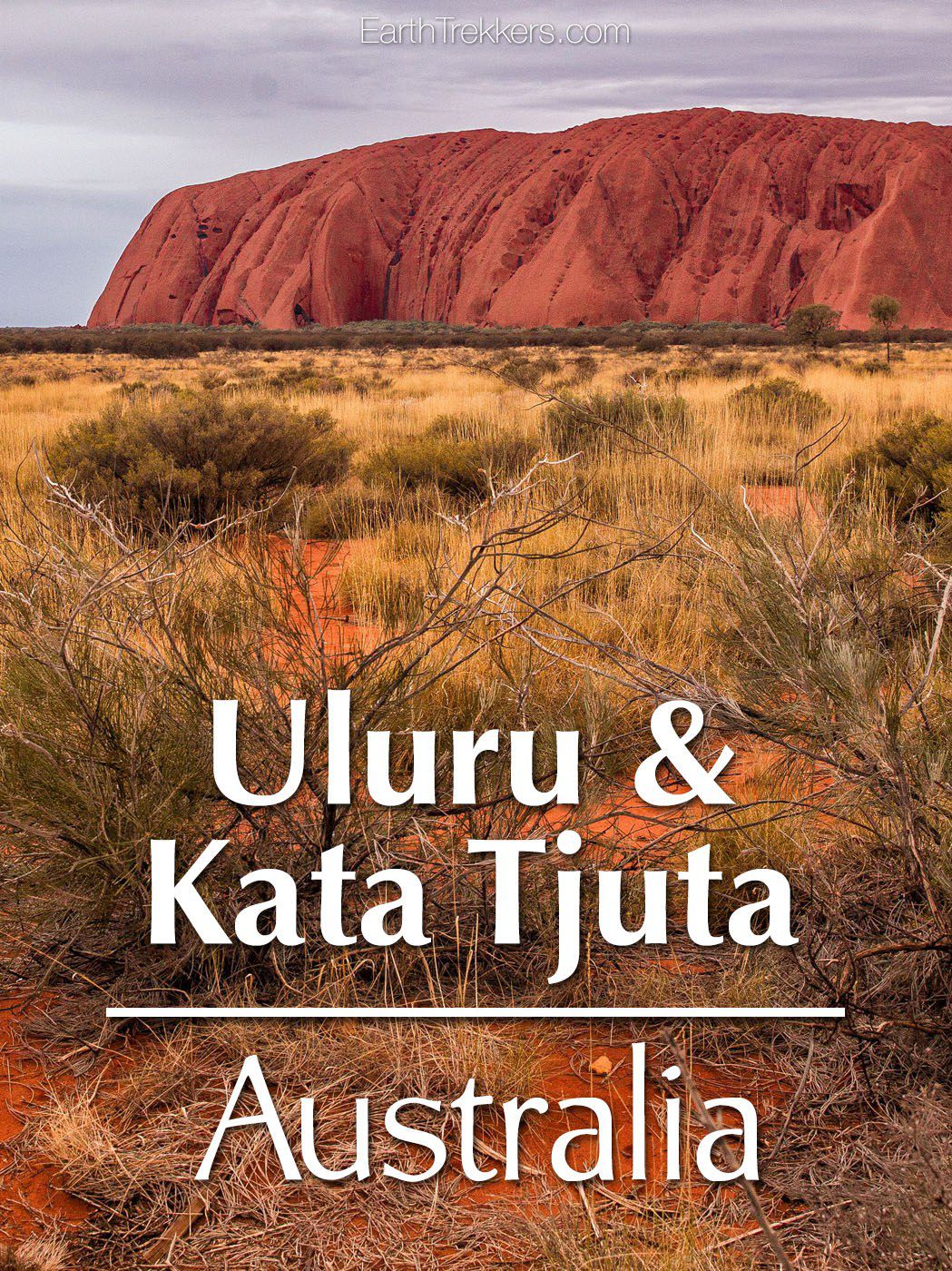