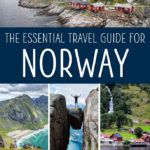 Breathtaking, adventurous, rugged, inspiring, photogenic, extraordinary...these are all words that can be used to describe Norway. It is hard to look at photos of Norway without saying "Wow!" over and over again. Norway is the land of fjords, quaint coastal towns, the Northern Lights, Vikings, trolls, dramatic photo spots, scenic drives, and some of the best hiking in the world. Whether you are coming here for a relaxing cruise through the fjords, an epic hiking adventure, or a trip to the Arctic Circle, Norway will not disappoint.

Here are a few Norway itineraries to help you plan your trip. Spend 10 days in southern Norway, exploring Bergen, Stavanger, and the fjords or spend 10 days in northern Norway and the Lofoten Islands. Or, combine both areas into one epic trip.

For hikers and outdoor enthusiasts, this Norway itinerary is perfect. In 10 days, you will be able to do four…

The islands of northern Norway are the perfect destination if you enjoy hiking, scenic drives, and jaw-dropping landscapes. On this…

10 Days in Norway: The Fjords and the Lofoten Islands

10 days in Norway…the options are endless for the best way to explore this gorgeous country. We have been to…

Here are a few articles about things to see and do in Norway.

14 Best Hikes in Norway to Put on Your Bucket List

If you ask us, putting one foot in front of another on a hiking trail is the best way to…

Without a doubt, northern Norway is one of the most spectacular places we have been. With rugged coastlines, small harbors…

Norway Bucket List: 20 Epic Things to do in Norway

Norway is the land of fjords, quaint fishing villages, Vikings, trolls, the northern lights, the midnight sun, scenic drives, and…

In southern Norway, you have several amazing hikes to choose from, such as Trolltunga, Kjeragbolten, Pulpit Rock, and Romdalseggen Ridge. You can also do Norway in a Nutshell, explore Bergen and Stavanger, and go on scenic drives past the fjords.

For hikers and outdoor enthusiasts, this Norway itinerary is perfect. In 10 days, you will be able to do four…

Trolltunga is one of Norway’s most popular hikes for good reason. It is an incredibly scenic hike, ending at the…

How to do Norway in a Nutshell on Your Own

Norway in a Nutshell is a scenic tour of Norway. Targeted towards travelers on whirlwind tours of Norway, this is…

How to Hike to Kjeragbolten: The Complete Guide

The Kjeragbolten hike is one of the most spectacular hikes in the world. We have hiked on some amazing trails…

How to Hike to Pulpit Rock in Norway (+ HELPFUL Tips)

The hike to Pulpit Rock is one of the most popular hikes in Norway. With great views, a relatively easy…

Kjeragbolten: Our Favorite Hike in Norway

When Tim and I first researched Norway as a travel destination, we repeatedly saw photos of what looked to be…

Where to Stay near Trolltunga, Norway

Trolltunga is one of Norway’s best hikes. It is a very long day hike and for the best experience you…

Northern Norway is a beautiful road trip destination in Europe. The Lofoten Islands are one of the most popular areas to visit, but Senja and the Vesteralen Islands are also well worth your time.

The islands of northern Norway are the perfect destination if you enjoy hiking, scenic drives, and jaw-dropping landscapes. On this…

14 Best Hikes in Norway to Put on Your Bucket List

If you ask us, putting one foot in front of another on a hiking trail is the best way to…

Complete Guide to Climbing Svolvaergeita in the Lofoten Islands

Svolvaergeita, also called “The Goat,” is a pinnacle of rock that is a popular rock climbing spot in the Lofoten…

Without a doubt, northern Norway is one of the most spectacular places we have been. With rugged coastlines, small harbors…

From the top of Festvågtind, the views over the fishing village of Henningsvaer are breathtaking. This hike is very similar…

Norway never ceases to amaze me. You know how you see photos online and think to yourself, “yeah, that looks…

Reinebringen, with its dazzling view over the fishing villages of Reine, Sakrisøy, and Hamnøy, is the most popular hike in…

How to Hike Ryten and Enjoy the View over Kvalvika Beach

The hike to Ryten has all of the ingredients of a perfect Lofoten Islands hike: sweeping vistas across the mountains…

How to Hike Segla, One of Senja’s Most Popular Hikes

The hike up to the summit of Segla is one of Senja’s most popular hikes. And this was our main…

The Lofoten Islands are one of the most stunning areas of Norway. This is where majestic mountains meet brilliantly white…

Ørnfløya, A Short but Sweet Hike in Sommarøy, Norway

The view from Ørnfløya over Sommarøy is gorgeous! The hike up Ørnfløya is short and easy, perfect if you like…

Top Ten Things To Do in the Lofoten Islands

The Lofoten Islands are a wonderland of jagged mountains, beautiful fjords, and white sandy beaches. This is a spectacular part…

Where to Stay in the Lofoten Islands, Norway

If you are making a decision about where to stay in the Lofoten Islands, you have a lot of options.…

Svalbard is a Norwegian archipelago that is located in the Arctic Ocean. This is a land of glaciers, the northern lights, the midnight sun, and frozen tundra. Svalbard is a very cool destination to add onto your Norway itinerary (pun intended). Here are some articles to help you plan your visit.

Top Ten Things to do in Longyearbyen, Svalbard

Longyearbyen is the world’s northernmost city. This is a town where the streets have no names, reindeer wander through town,…

Svalbard. An arctic playground where there are more polar bears than people. This is a land of glaciers, the northern…

Svalbard Packing List: What to Pack for the Summer Months

One of the biggest questions we had while planning our trip to Svalbard was “what do we pack?” Svalbard is…

Svalbard Budget: How Much Does it Cost to Visit Svalbard?

Do you have big dreams of visiting Svalbard? Then you probably also have the question how much does it cost…

Kayaking Adventfjord and Hiking Hiorthfjellet: A One Day Adventure in Svalbard

Svalbard offers a wide range of adventure activites. Ride on a rib boat and search for walrus, kayak in front…

Does the idea of kayaking in icy waters to get up close to a glacier sound like fun to you?…

Cruising to Pyramiden, a Russian Ghost Town in Svalbard

Cruising to Pyramiden, an abandoned Russian mining town near Longyearbyen, is one of the most popular excursions in Svalbard. On…

One Week in Europe: 25 Epic Itineraries

Do you dream of visiting world-class cities like Paris, Barcelona, or Venice? Or would you rather hike the Alps, go on a scenic train ride, explore the beautiful beaches and coastal towns in southern Europe, visit fairytale towns and castles, island hop in Greece, or go on an unforgettable road trip in northern Europe?

In this article we list 25 ways to spend one week in Europe.

Europe is a joy to explore. With world-class cities, medieval towns, historical sites, the snowcapped Alps, gorgeous beaches, and some…

12 Things You Should Know about Renting a Car in Europe

Having a car provides a lot of freedom and convenience when traveling through Europe. You can travel at your own…

30 Beautiful Places to Visit in Europe (+ Map and Photos)

It is no secret that Europe is filled with beautiful places to visit. With its grand cities, fairytale-like towns, soaring…

7 Things to Know When Planning Your First Trip to Europe

If you are planning your first trip to Europe, it can be an overwhelming experience. Where should you go? How…

Europe is one of our favorite places to go hiking. There’s no better way to explore the dramatic and varied…

Do you want to know how we capture the images that you see on our website? Here is our photography…

Hike to Trolltunga.  Nowadays, almost everyone has seen the photos of people posing on a narrow outcropping of rock, with the dramatic scenery of Norway in the background. You can hike, bike, and climb to Trolltunga, this being one of the epic hikes possible to do in Norway.

Kjeragbolten. Quickly becoming another Norwegian icon, Kjeragbolten is a large boulder wedged between two cliffs. Do you dare step out onto this rock? Even if you don't, the hike to get there is packed with breathtaking scenery.

Geirangerfjord. A UNESCO World Heritage Site, Geirangerfjord is labeled is one of the most beautiful fjords in Norway. View it from land, cruise ship, ferry, or kayak.

Trollstigen.  Also called the Troll's Footpath, this dramatic road is one of Norway's most visited sites. This winding road provides more dramatic views and a chance to drive on one of Europe's "most dangerous roads," although we found it to be quite safe.

Svalbard.  The Svalbard Islands are located between Norway and the North Pole. Visit polar bears, historic mining towns, and the town Longyearbyen.

Bergen.  Bergen is the second largest city in Norway. Eat fish caught fresh from the ocean, visit Bryggen, the Hanseatic houses that dominate the harbor, and get a bird's eye view of the city from the funicular.

Pulpit Rock.  This is the most popular hike in Norway. Easily accessible from Stavanger, expect large crowds of people during the summer months.

Lofoten Islands.  Located in the Arctic Circle, these islands are one of Norway's most beautiful and off the beaten track destinations. Known for its quaint fishing villages, the Lofoten Islands are also spot to go surfing. Who knew?

Ålesund.  This coastal town is one of the prettiest in Norway. It's quick to visit and don't miss the short uphill climb to a viewpoint over the city.

Tromso.  Tromso is considered to be the northernmost city in the world and one of the best places to witness the Northern Lights.

Oslo.  Oslo is Norway's capital. Things to do include seeing the Holmenkollen Ski Jump, the Viking Ship Museum, the Norwegian National Opera, and Akershus Castle.

How Many Days Do You Need in Norway?

For the best experience, plan on spending 10 days in Norway. This gives you enough time to explore a portion of southern Norway, go on a road trip through northern Norway and the Lofoten Islands, or combine both regions into one trip.

The best time visit Norway is between June and September. During this time, the weather is warm and the roads and trails are clear of snow.

If you plan to go hiking in Norway, you should be aware that the hiking season in southern Norway runs from June 1 through September 30. Outside of this time, you should only go hiking with an experienced guide.

Even if you don't plan to go hiking, some roads in Norway can be closed from November through May. 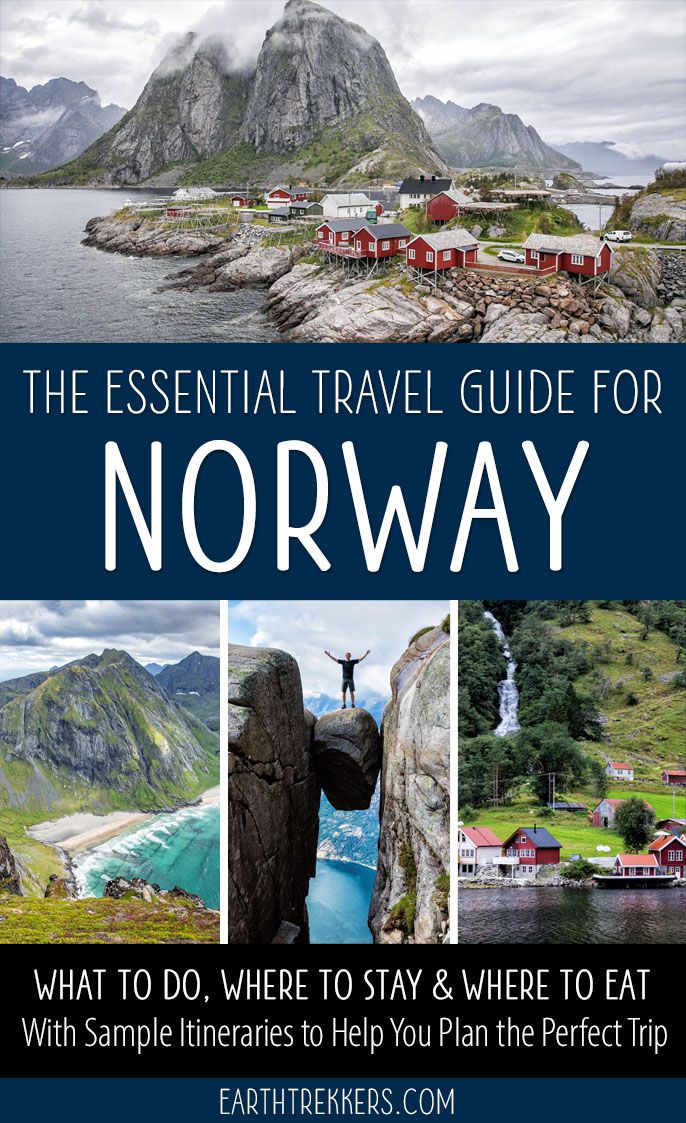